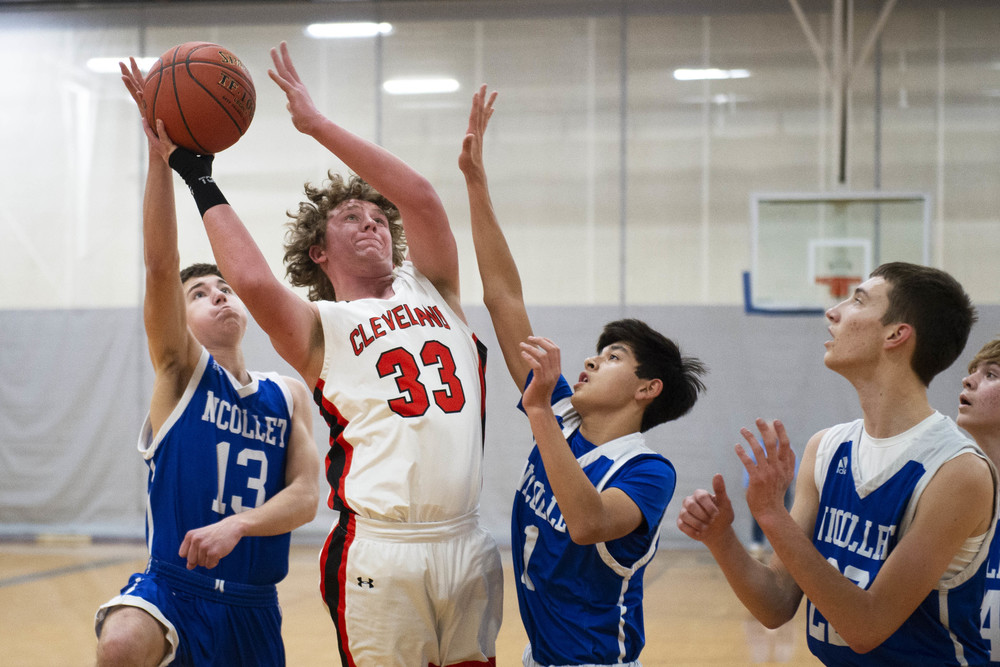 With the varsity boys upping their game each outing and host Nicollet's top scorer sidelined with an injury, the Clippers had a good chance on Thursday to avenge an earlier 69-48 loss and secure their first win this season.

And with two and a half minutes left in the second half, it looked like they might when freshman Blake Lyons sunk a pair of free throws to put the Clippers up 48-47.

But the 4-8 Raiders quickly responded with a three to regain the lead. From there, the Clippers missed a couple of shots and then gave up two turnovers that resulted in three more Raider points. Colin Krenik made his fourth three of the night, but after a free throw, the Raiders escaped with a 58-51 triumph.

While turnovers loomed large in the loss, head coach Mike Meyer said it mostly came down to shooting.

“We missed a lot of easy layups underneath. There was hesitance to just go up strong and get the foul. The guys started off and maybe got blocked once or twice and then they started to fade away outside with hook shots that weren’t working for us. If we could have just attacked the rim a little bit better…we’re working that ball underneath. We’re posting up. We’ve just got to finish. Other than that we played really hard tonight.”

Carter Dylla took a Krenik assist up and in for the Clippers’ first basket, but the Raiders scored from inside and then beyond the arc to go up front 7-2.

Wyatte Devens (above), back as a starter for the first time since early in the season, drove for a basket and then assisted Lucas Walechka to pull the Clippers within one.

“Wyatt’s been working really hard in practice,” Meyer said. “I wanted guys who I knew were going to come out with energy and play aggressive, and Wyatt did. He proved me right.”

The Raiders responded with six points from the floor. Dylla assisted Walechka and then scored himself on a layup, but the Raiders tossed a long outlet pass that resulted in a basket and a 15-11 advantage.

For the next six possessions, neither team could find a handle on the ball, but Lyons rebounded and scored to break the string, and Devens followed up with a hook shot that pulled the Clippers within a point, 16-15.

The Raiders made a two pointer and a pair of threes, but Dylla sunk a three, and the Clippers were within striking distance, 24-20, at the break.

Walechka rebounded and scored for the first Clipper points of the second half. Kolby Gens dropped in a shot from the paint, and Krenik sunk a three, but the Raiders put in a three of their own on their ensuing possession.

Krenik hit another three, Braeden Hastings made back-to-back threes, and then Krenik arced in another three to pull the Clippers within a point, 40-39. From there, Walechka put in a pair of shots from the free-throw stripe, and with 10 minutes left, the Clippers had their first lead of the night.

“Tonight we did a good job fighting,” Meyer said. “When they went on their run, we came back with our run. We never gave up.”

The Clippers had a chance to extend their lead but relapsed with the turnover flu, and the Raiders took the lead before another Krenik three with 4 minutes left knotted the game at 46.

“We went on that three run, and if we could have just kept that going,” Meyer said. “But they switched up their defense, and I just didn’t have an answer, so that’s partially my fault. The guys played hard.”

Walechka led the effort with 13 points. Krenik had a dozen points, all coming from three-point land. Dylla had eight points. Hastings had six points. Devens, Lyons and Gens each had four points.

The Clippers had eight threes and made five of eight free throws. Nicollet put in six threes and was six of 14 from the free-throw line. Dylla and Lyons each had a steal. Dylla made nine assists. Gens had one block. The Clippers had a dozen turnovers.

“It’s little fundamental things that I think if we can just clean them up,” Meyer said. “Make some passes that I know that guys wish they had back, little passes underneath where we’re trying to force the ball inside. It’s a situation where I’d rather see the ball reversed and find the opening. A couple more things like that…they just got to keep putting things together. Little by little we’re getting better.”

Meyer said that it was a tough loss for his struggling Clippers, yet he knew it will give them confidence.

“Just knowing they can compete. Even if it is another bottom-of-the-barrel team, all the teams in this conference are good, so any night, it can be anybody’s game. If we can put the little things together...against Martin County West it was 50 percent from the free-throw line. If we shoot better, we’re in the game against the number-one team.”

Nicollet is just in front of Cleveland and Alden-Conger/Glenville-Emmons in the Valley. At the top is 8-0 Martin County West followed by 6-1 Loyola, 7-3 LCWM and 5-2 St. Clair.

Former Minnesota Twins third base coach and the winner of the state’s first “Mr. Basketball” award Gene Glynn comes to town with his St. Clair team on Thursday. 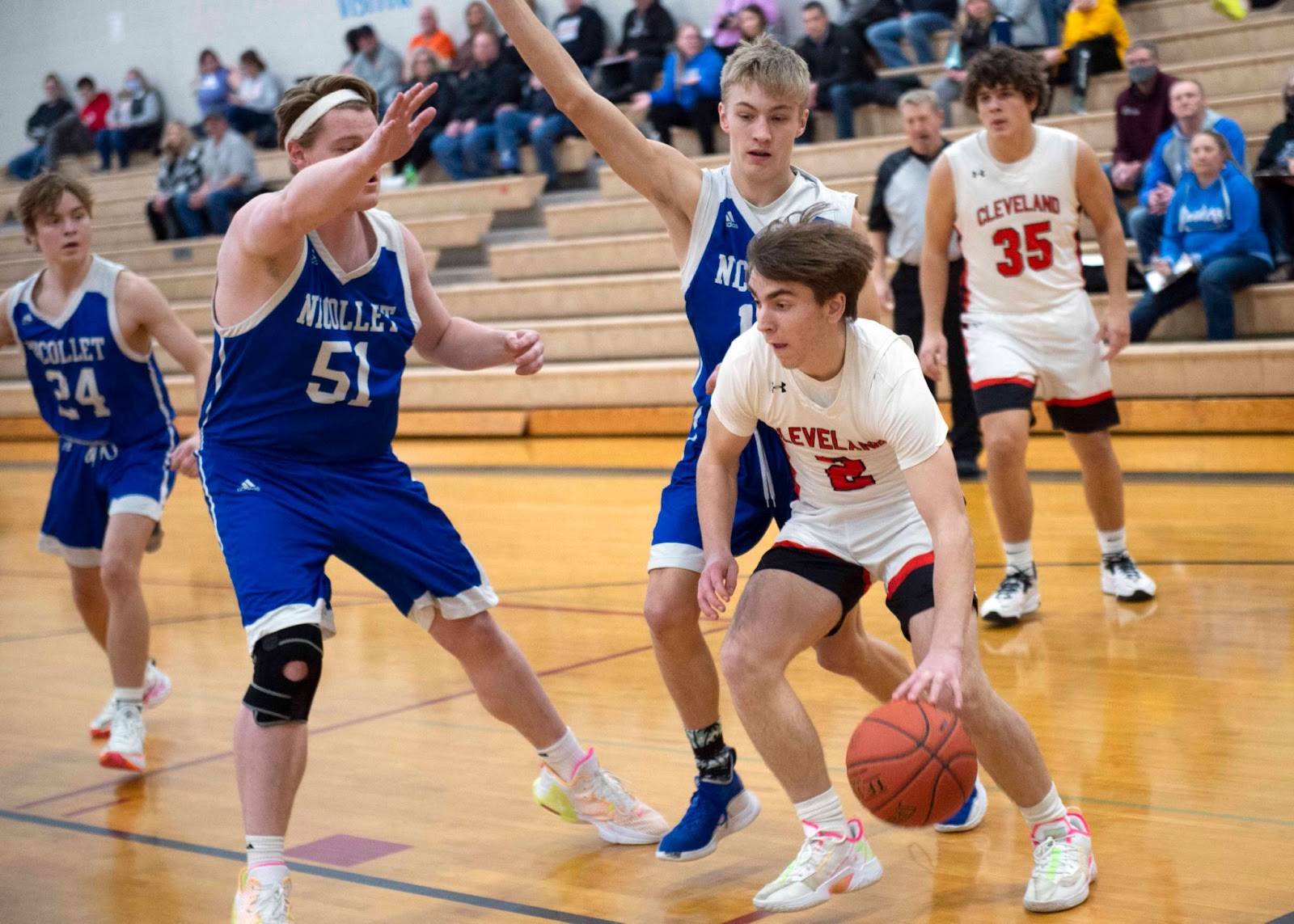 Carter Dylla dribbles to the rim. 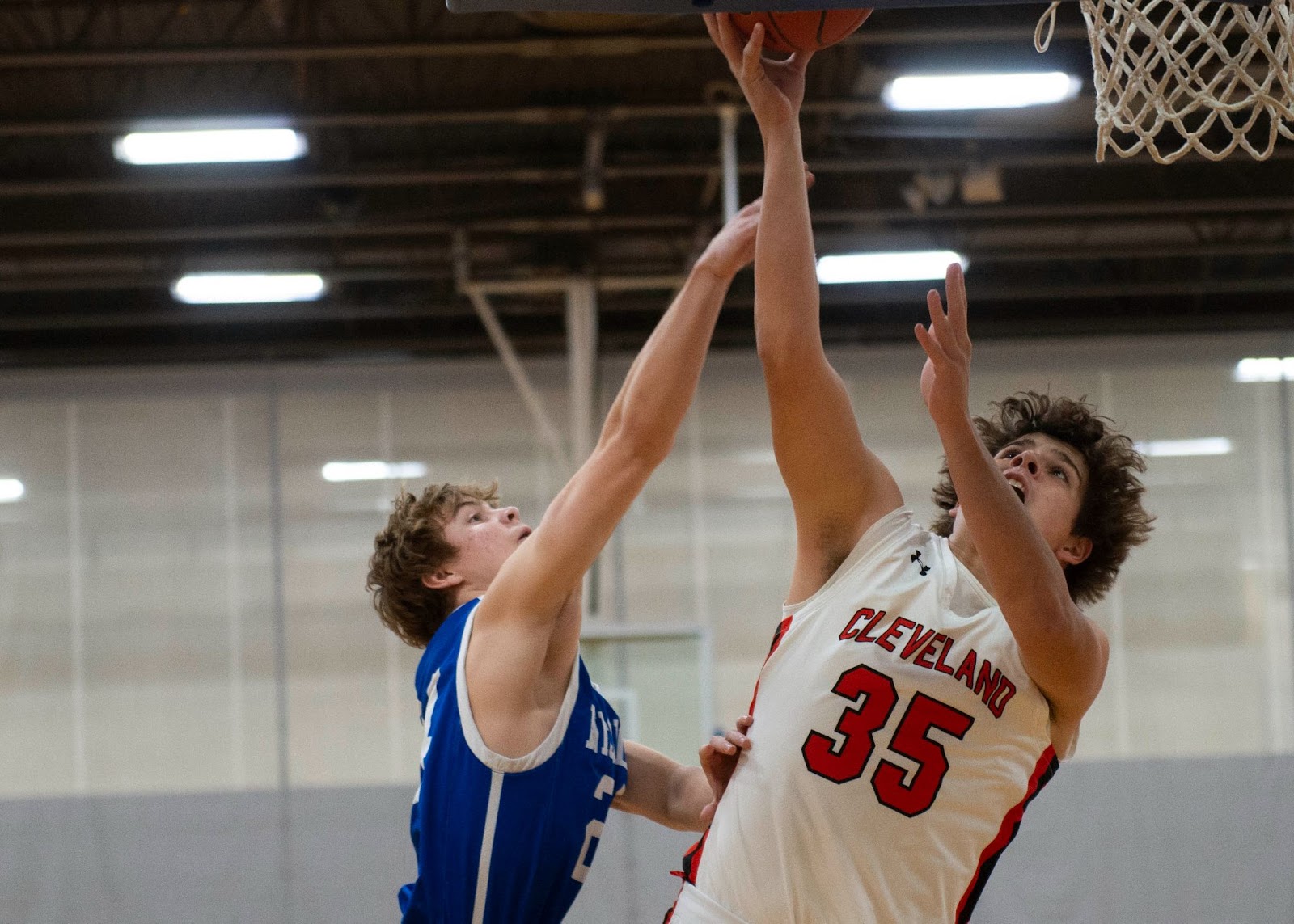 Lucas Walechka releases a shot near the net. 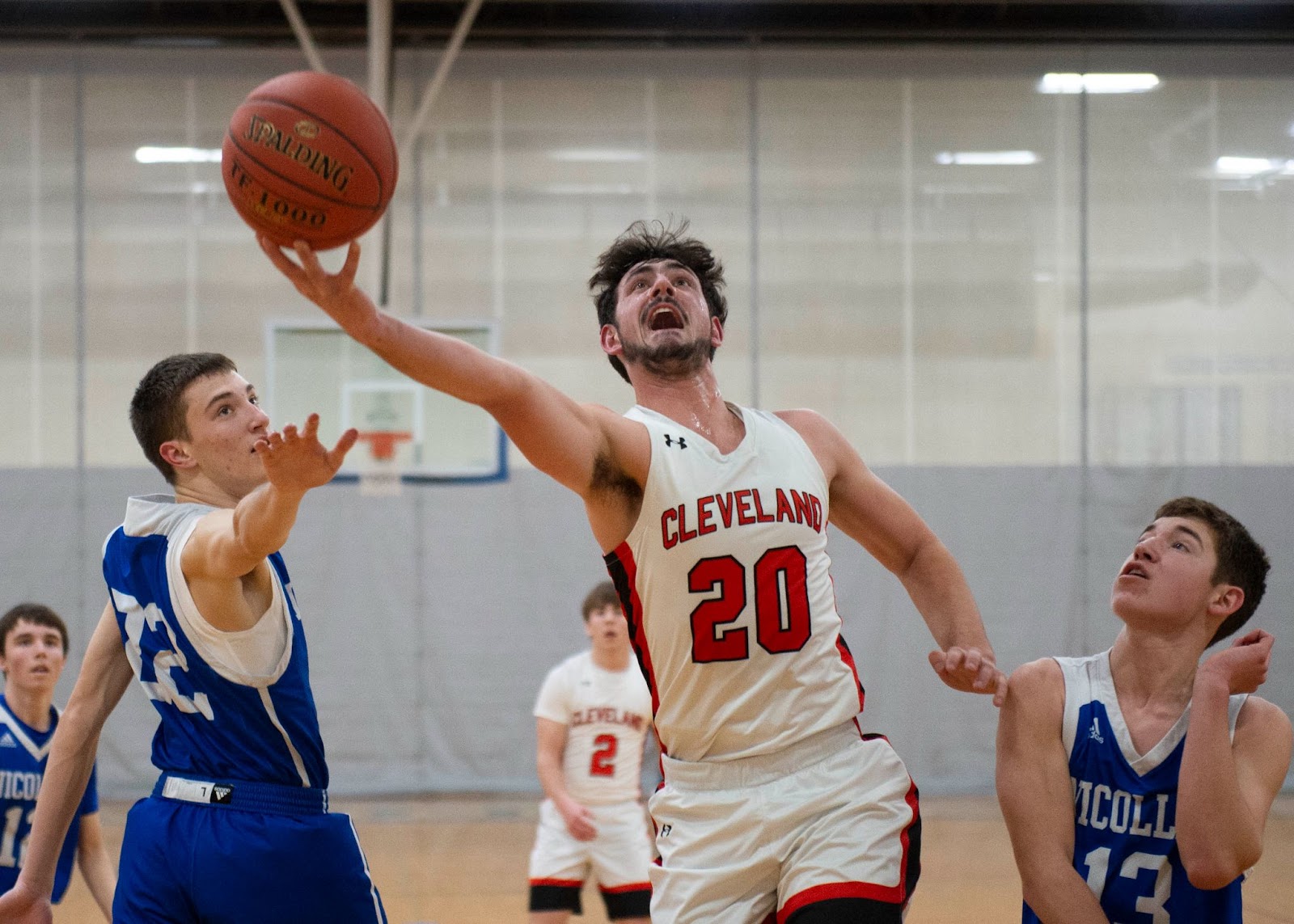 Kolby Gens reaches out for a shot. ‘ 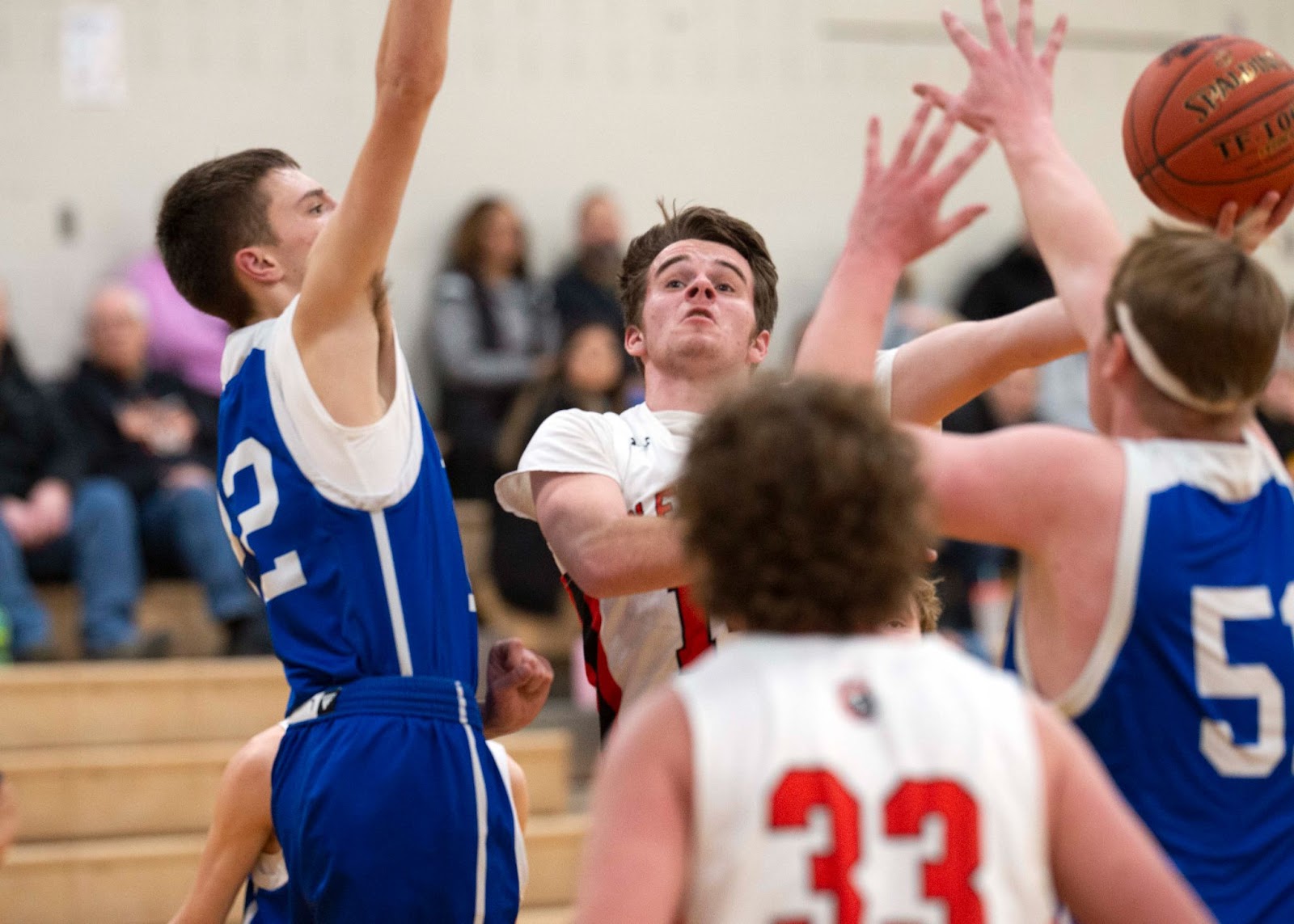 Colin Krenik fights for an inside shot.