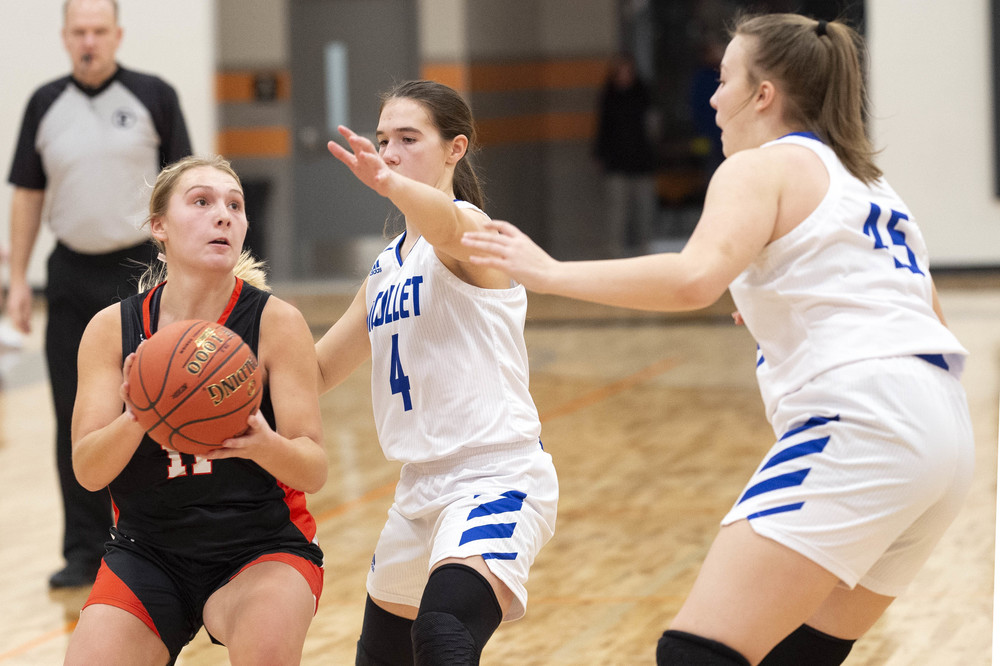 Kaylee Karels (above) led all players with 22 points, but the Clippers fell to rival Nicollet 57-46 in the Cleveland gym on Monday.

In place of the Hahn sisters were the McCabe sisters: Mariah and Lacey, but they held their own, said head coach Joe Remiger.

“They stepped up well for us. A few times they were a little timid, but for the most part, this game and the last game I have been impressed with how they stepped up. We miss Greta and Ava, but I couldn’t have asked for more, especially with Mariah guarding Marah (Hulke, who leads the Raiders in scoring). The first half she only had two points.”

Karels got the Clippers off to a good start with a steal and ensuing three. The Raiders tied it up on a free shot and a two-pointer, but with a pair of Emily Kern free throws, a Sarena Remiger inside basket after a Karels pass and a Karels basket from the paint, the Clippers, solid on defense, got out in front 9-4.

After a pair of baskets from three-point acreage, the Raiders pulled out front 11-10 midway through the half. They spurted for the next seven points too before Remiger stopped the rally with an easy layup.

“They were driving a lot, and we were just not sliding over to help,” Remiger said. “We’re getting there but too late, and we’re whacking them pretty hard.”

With another three, the Raiders had a 21-12 advantage. From there, Karels grabbed her own rebound and put it back up for a basket and followed up with a hook shot for four-straight Clipper points. Kern took a Lacey McCabe toss in for a basket, but the Raiders scored twice more, including just in front of the buzzer for a 29-20 lead at the break.

Karels put in a layup on a Mariah McCabe steal and assist to start the second half. Strong on both the D and O boards, Kern rebounded and scored to cut the Raider’s lead to six.

But after a Lacey McCabe free throw, the Raiders chipped away seven-straight points before Kern pulled down an offensive rebound and scored. The Raiders followed with a pair of threes to widen their lead.

With 11-straight points, Karels fought hard down the stretch, but it wasn’t enough, and the Raiders made enough free shots to hang on.

Karels put in the Clippers’ only two baskets from beyond the arc. They were 10 of 24 from the free-throw line. Nicollet had seven threes and was 20 of 21 in free-throw shooting. Hulke led her team with 20 points.

With the same lineup on the Friday before, the Clippers fell 66-50 in Northrop to Martin Luther/Truman/Granada Huntley East Chain.

“We started that game out well,” Remiger said. “But then Kaylee got three fouls, and we went from a 10 or 11-point lead with three minutes left to down by 11 at the half. She and Sarena were both sitting.”

Karels scored 18 points in that effort with 12 of them sent from beyond the arc. Remiger and Kern each had 11 points. Lacey McCabe and Emma Treanor each put in a three. Addi Holden and Mariah McCabe each contributed two points.

The Clippers were successful with a third of their dozen free-throw attempts. The Jaguars made six threes and were 10 of 20 from the foul line.

The Clippers are back in action on Friday when they host Madelia. Jump ball is at 4:30. 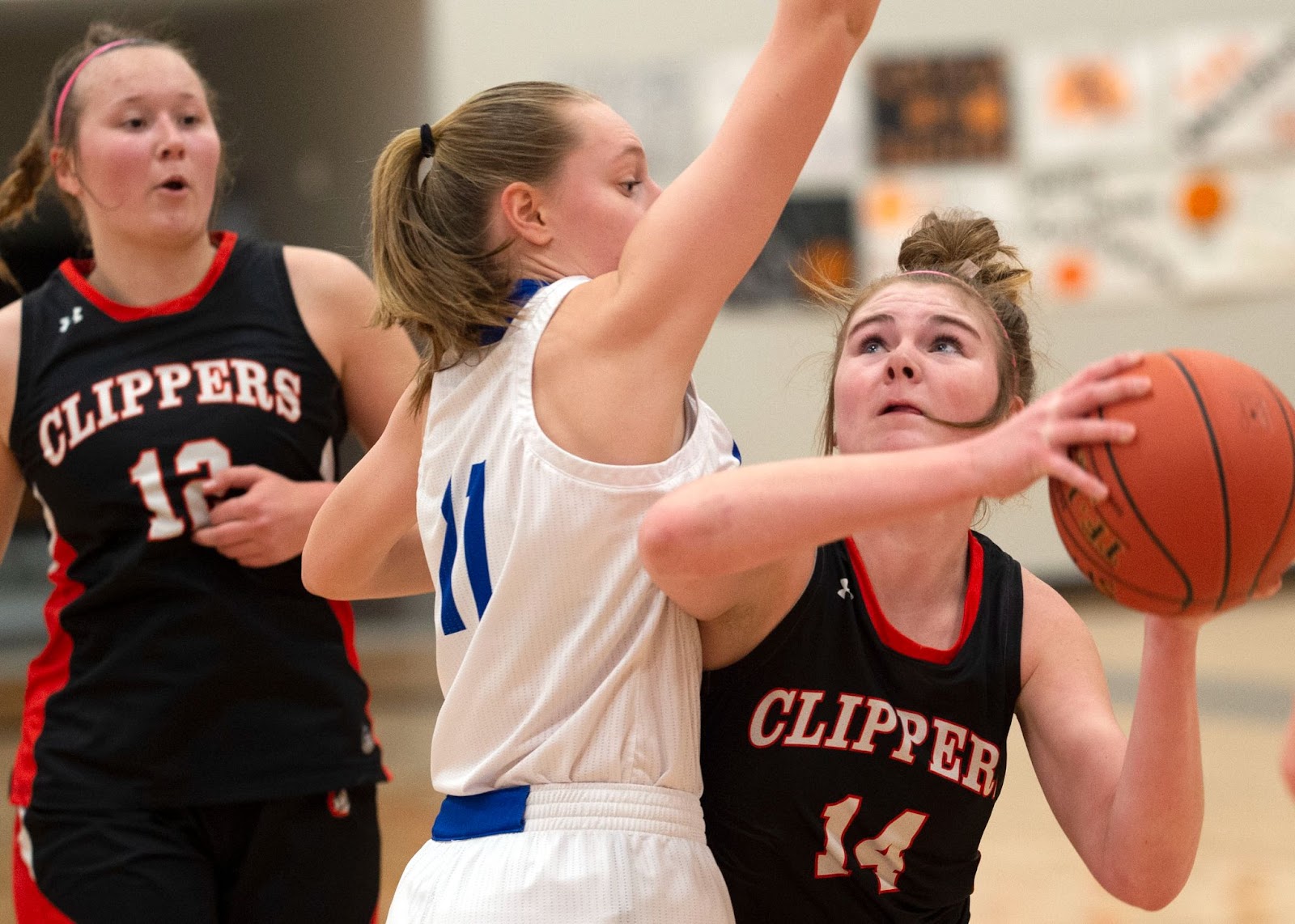 Emily Kern works under the net. 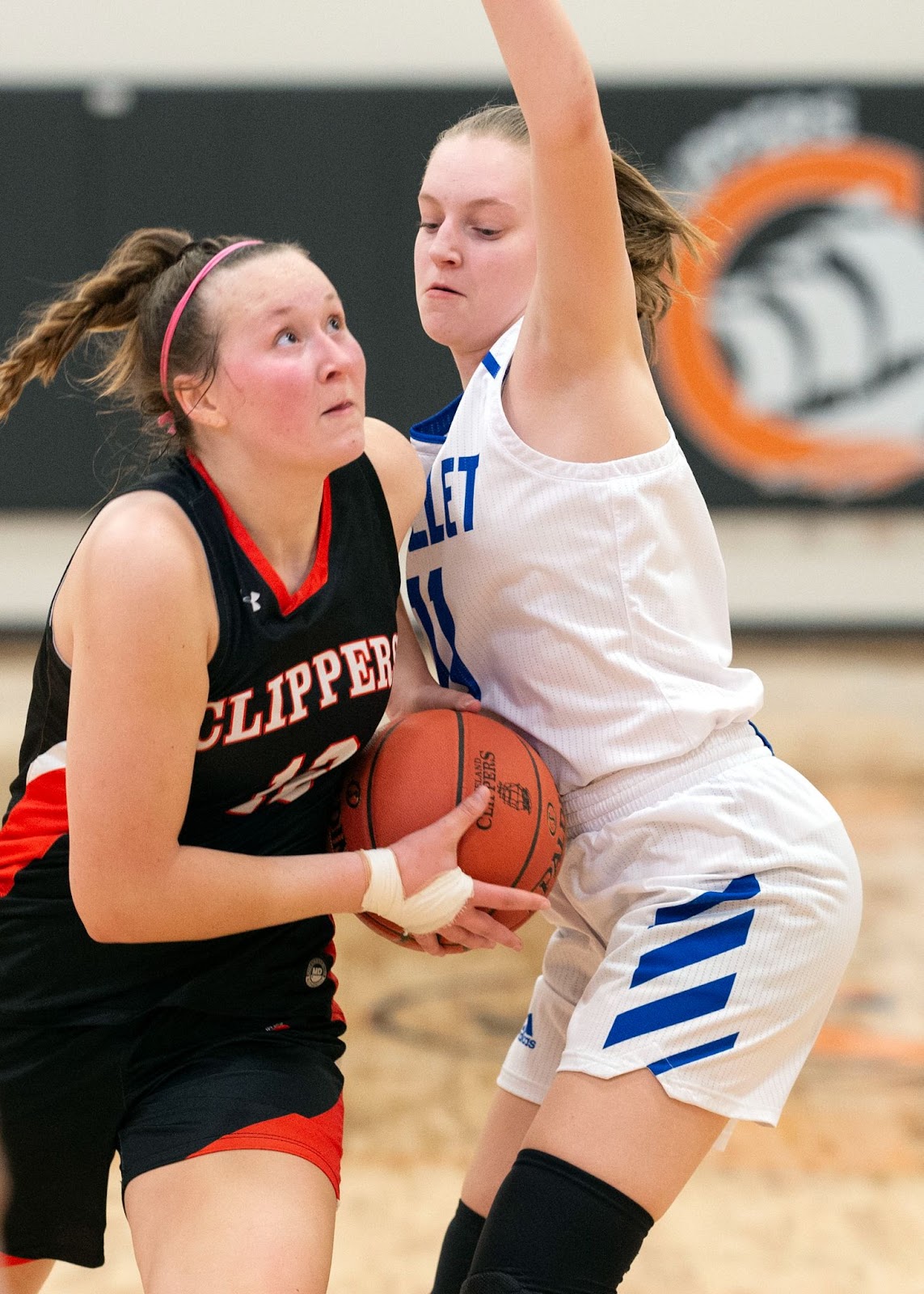 Sarena Remiger takes the ball to the hoop. 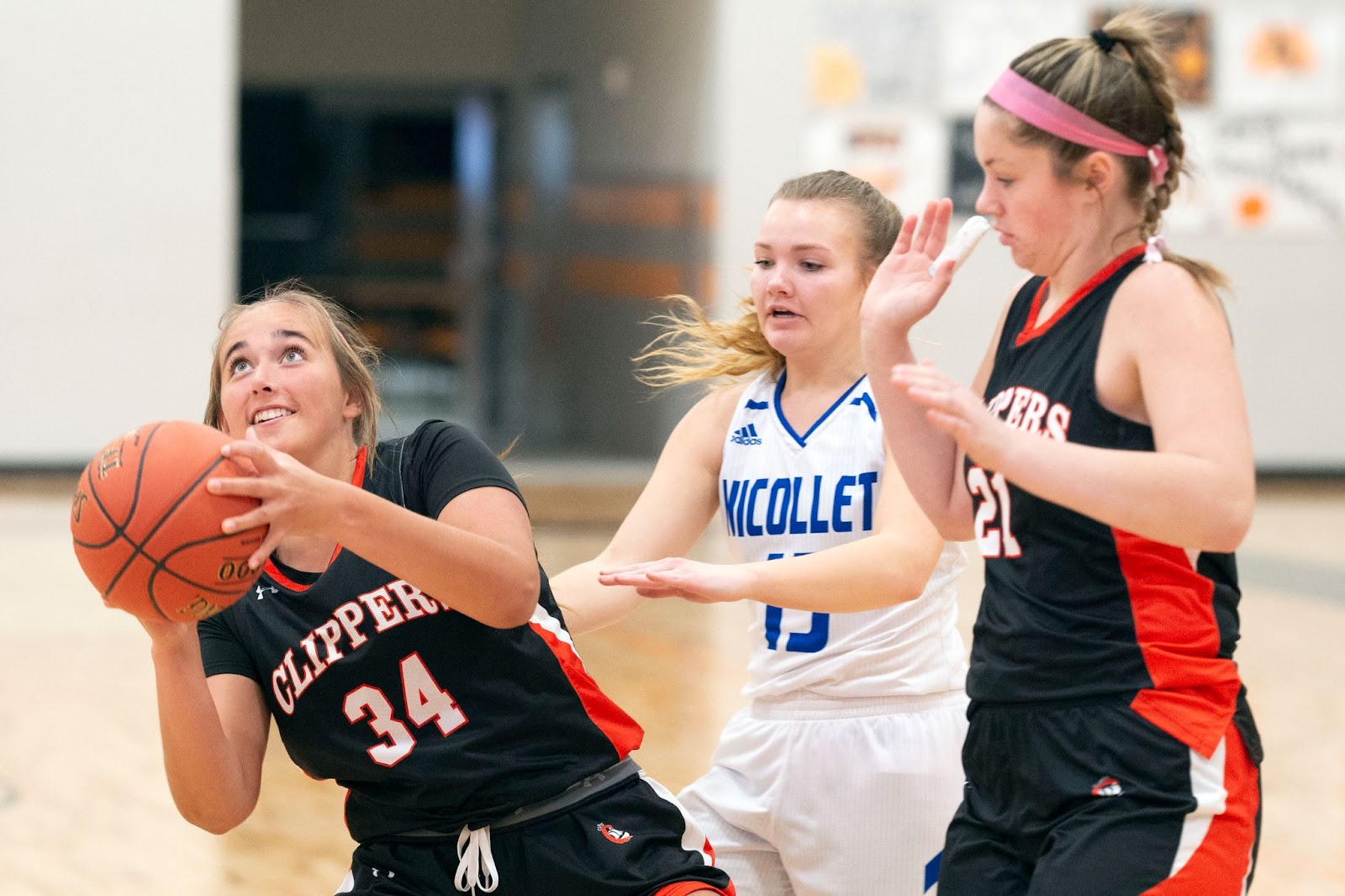 Laci Hollerich sets up for a shot. 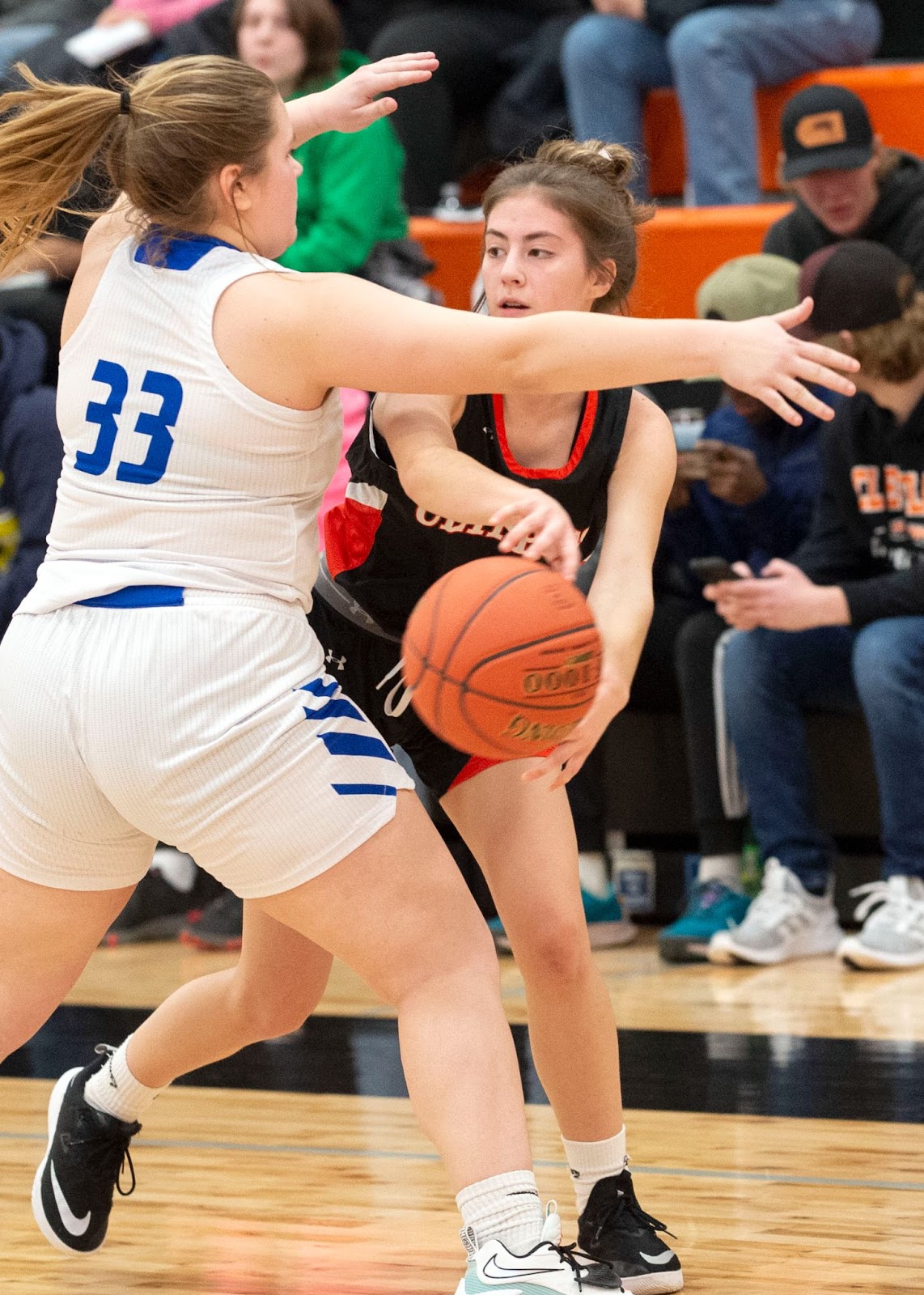 Lacey McCabe passes around her defender. Mariah McCabe goes after a run-away ball after racing with Marah Hulke. McCabe tossed up from the floor shortly after to assist a Kaylee Karels layup.