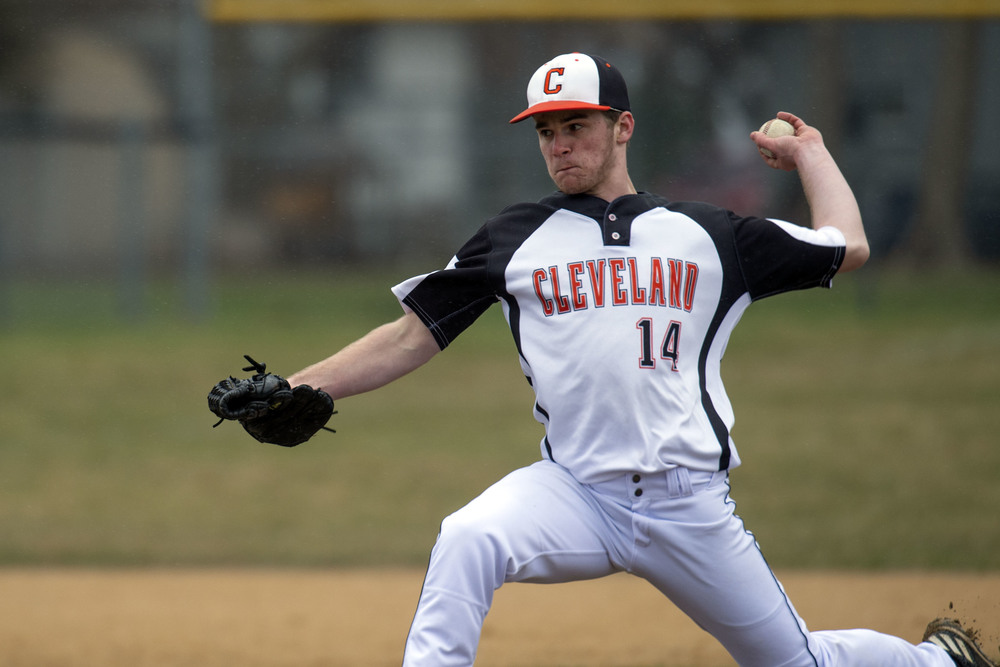 In sheets at times, rain pelted both the Clippers and visiting Loyola on Friday, and with six errors and only three hits to the Crusaders' five, it would have seemed as if the Clippers suffered the worst of it.

But they still topped the Crusaders 5-3.

“The mound was kind of slippery, and making plays was pretty hard,” said senior left hander Colin Krenik (above), who went five innings for the win. “The ball was difficult to get a grip on. My curve ball hung a little bit.”

But the Clippers responded when they needed too, Krenik said.

“We made the plays when it mattered the most, and so I think we did a pretty good job coming out and winning the game.”

The Clippers got their offense started when Lucas Walechka sent a hard-hit ball to left field for a double that scored Jackson Meyer from second. Meyer had beat out a grounder to third to get on base and moved to second when Tanyon Hoheisel walked.

Hoheisel advanced to third on the Walechka hit and scored on a ball that got by the catcher. Walechka made it 3-0 after the shortstop bobbled a Gabe Sullivan grounder for the Crusaders' only error.

“In this type of weather situation, any time you can get up right away, it keeps you warm,” said head coach Mike Krenik.

Three Clipper miscues led to a pair of Loyola runs in the third.

First, a putout throw skidded by first baseman Walechka. After reaching second on the error, the runner advanced to third on a single and scored on the play when the ball got by the Clipper outfield. Another error, similar to the first one, advanced the runner to third, and he scored on a passed ball to pull the Crusaders within a run, 3-2.

“You make an error, you think about it for two seconds and then you think ‘what’s the next play?’” coach Krenik said. “What am I going to do?”

But the Clippers added some padding to their lead in the bottom of the third. Walechka took a pitch to the body, advanced to second and to third on passed balls and scored on a Kaleb Timlin ground out.

The Clippers’ final run came an inning later when Ethan Fuller walked, reached second on a passed ball, advanced to third on a Carter Dylla infield hit and scored on a double steal where Dylla sacrificed himself at second.

The Crusaders scored a run in the sixth when Krenik gave up a single and an RBI double, but Dylla took over on the mound and got the next three batters out, the first on a whiff and the next two on grounders to Walechka at first.

Krenik allowed five hits and three runs while striking out three and walking zero. Dylla struck out three, walked none and didn’t give up a hit.

“Trying to throw your off-speed stuff in wet weather and trying to grip a ball is tough,” said coach Krenik.

The Clippers had just three hits: from Meyer, Walechka and Dylla. They struck out eight times.

The day before, after a rain delay, the Clippers fell 5-1 in a lackluster effort to top-of-the-Valley-Conference Madelia.

“They were not loose,” coach Krenik said. “I don’t know if it was the rain delay, but they just didn’t come ready to play.”

“We had a few mental errors,” Krenik said. “Every day we work situations on first and third,”

Cleveland’s lone run came in the fourth when Meyer singled, advanced on a Hoheisel single and scored on a Walechka single. Those were the only hits the Clippers would have. They struck out five times.

Allowing five hits and five runs, Walechka took the loss. Dylla threw in the fourth and fifth and struck out two while allowing one hit. Krenik tossed the final inning and struck out one. The Clippers had four errors, three more than Madelia.

Madelia is a well-disciplined team and, despite having a young program, deserves to be at the top of the conference, Krenik said.

The Clippers start out the week with two road trips: to Janesville on Monday and to Lake Crystal on Tuesday. 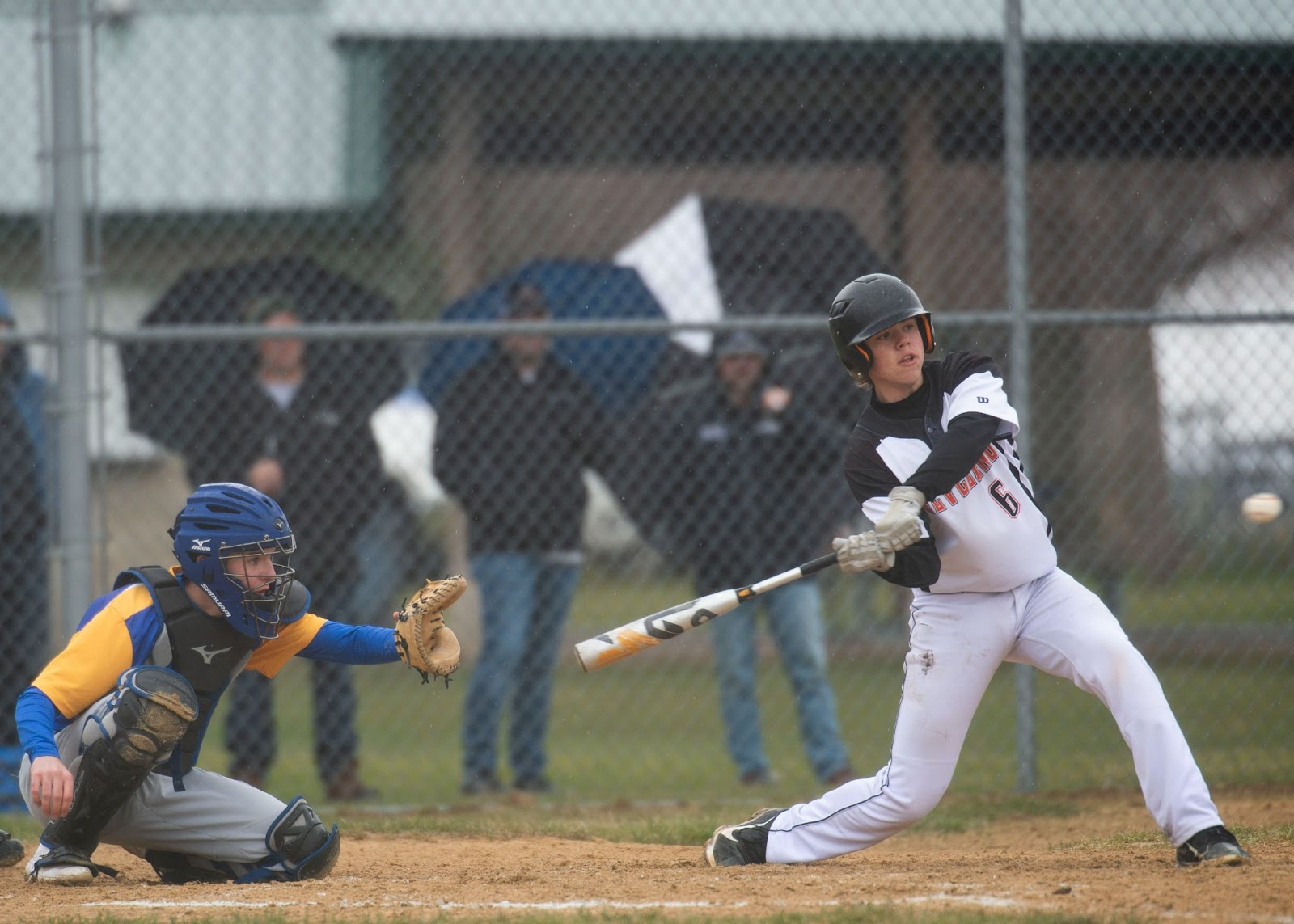 Sophomore Gabe Sullivan uncoils for a grounder to the Loyola shortstop that resulted in an error. 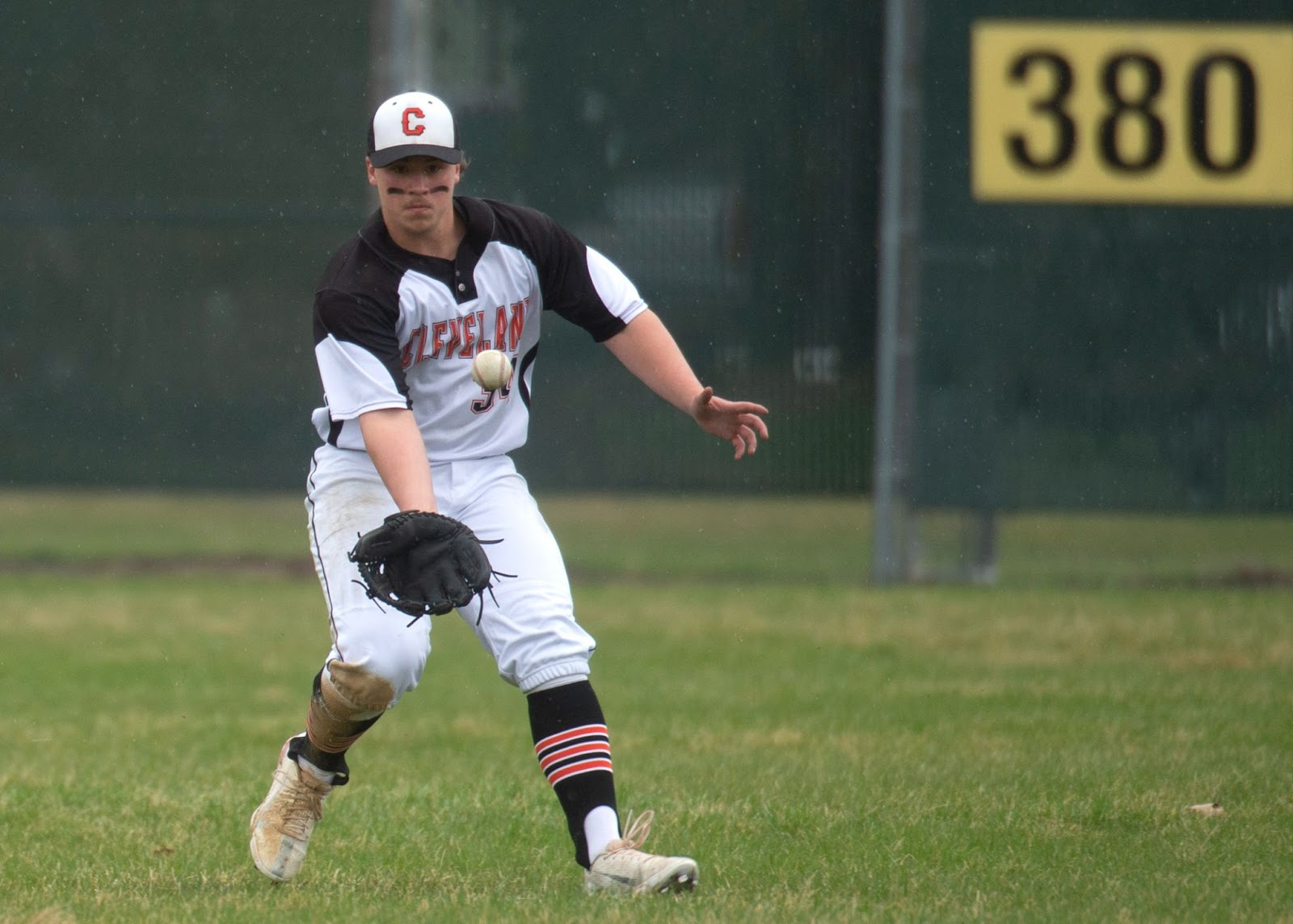 Tanyon Hoheisel runs down a Loyola hit to center field. 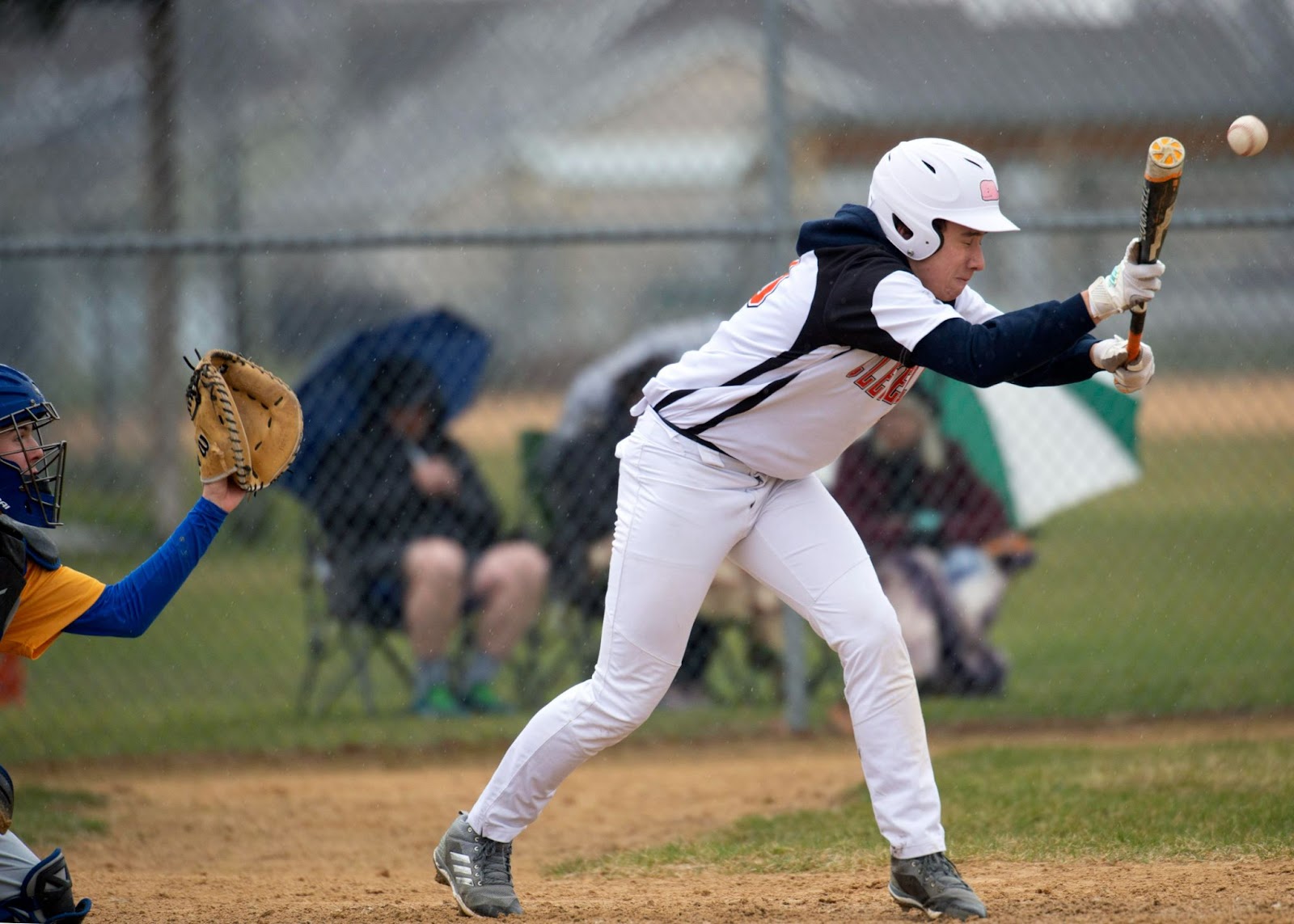 Ethan Fuller squares for a bunt against the Crusaders. 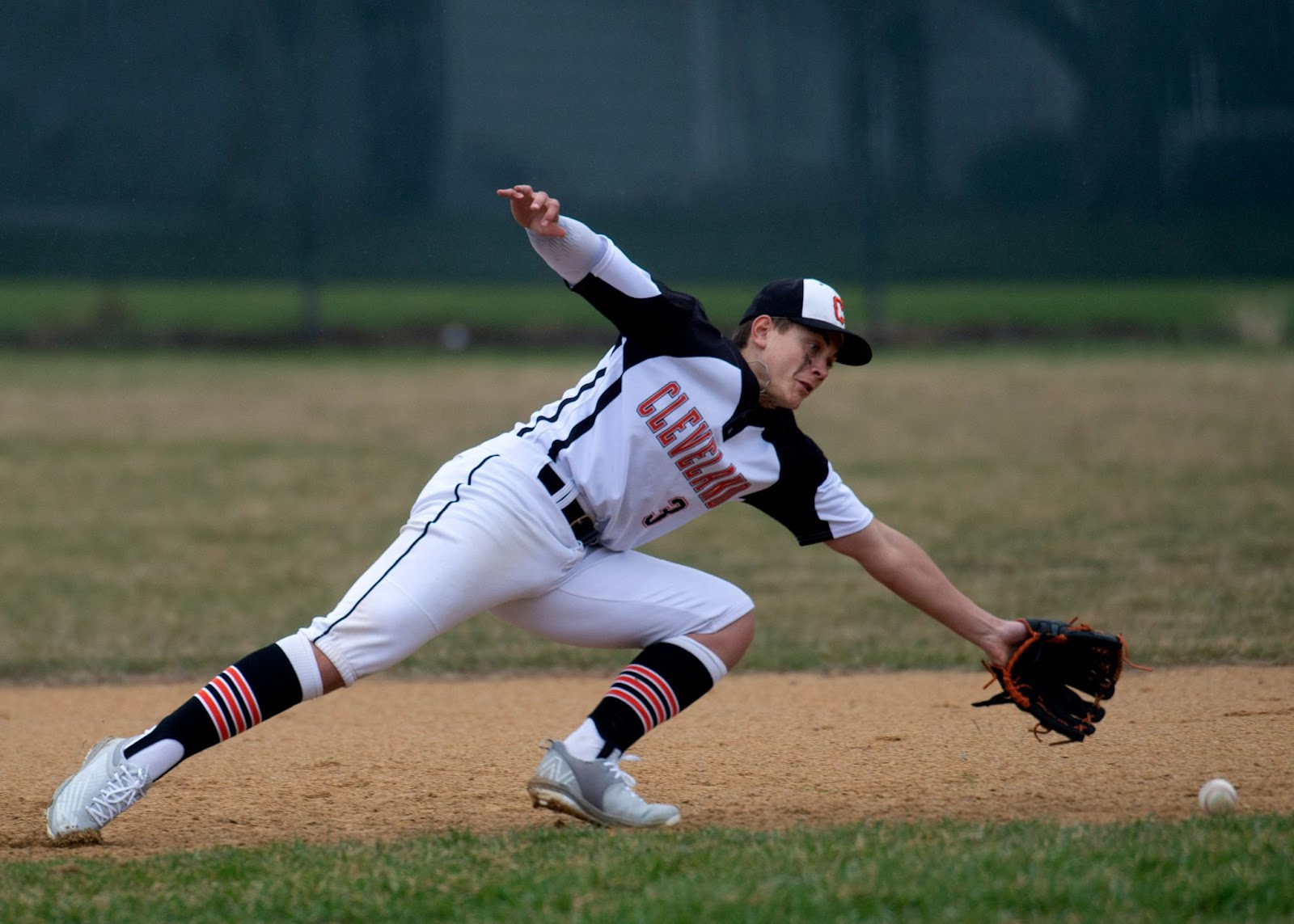 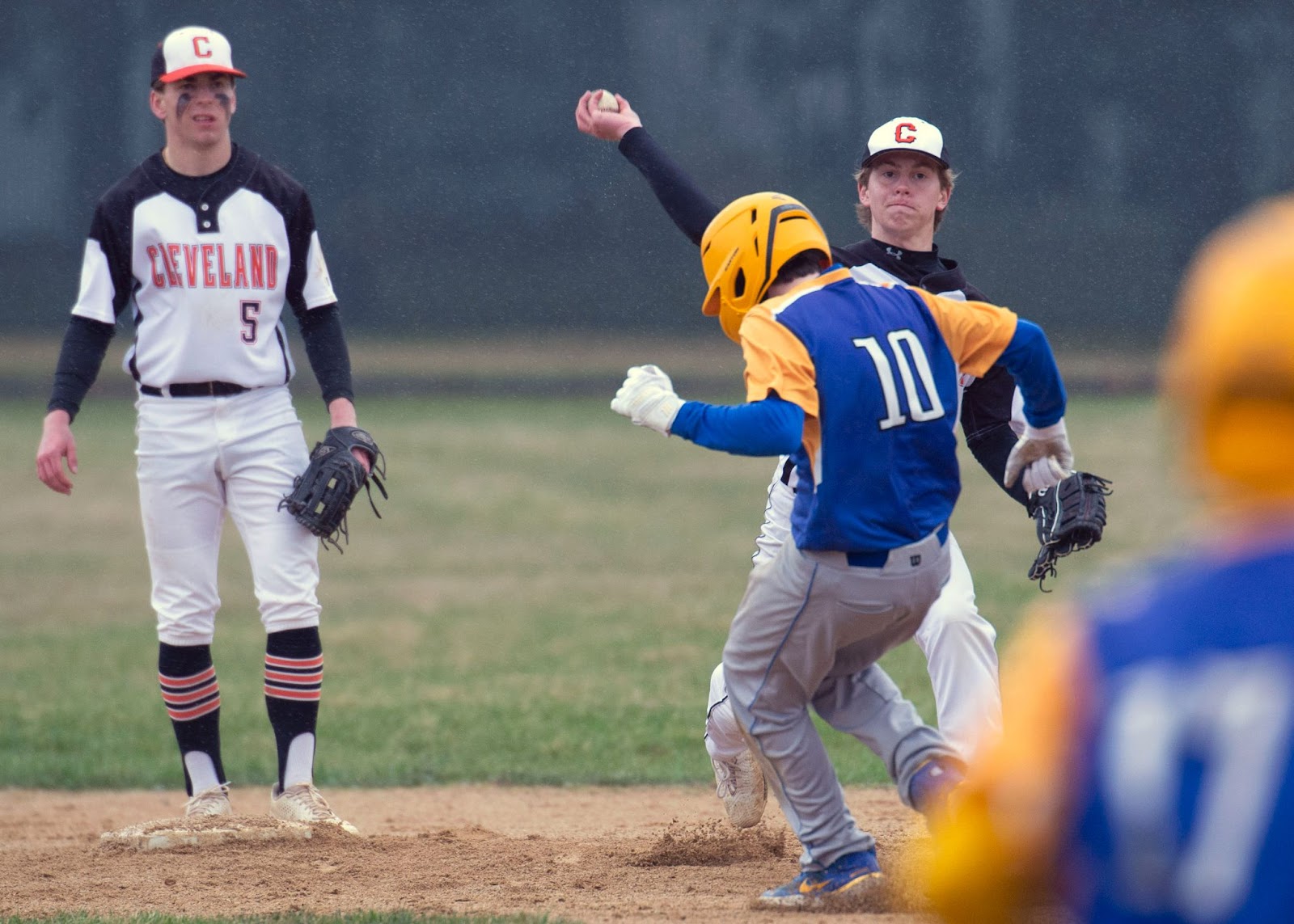 Freshman Blake Lyons winds up for a putout throw to first during the Loyola game. 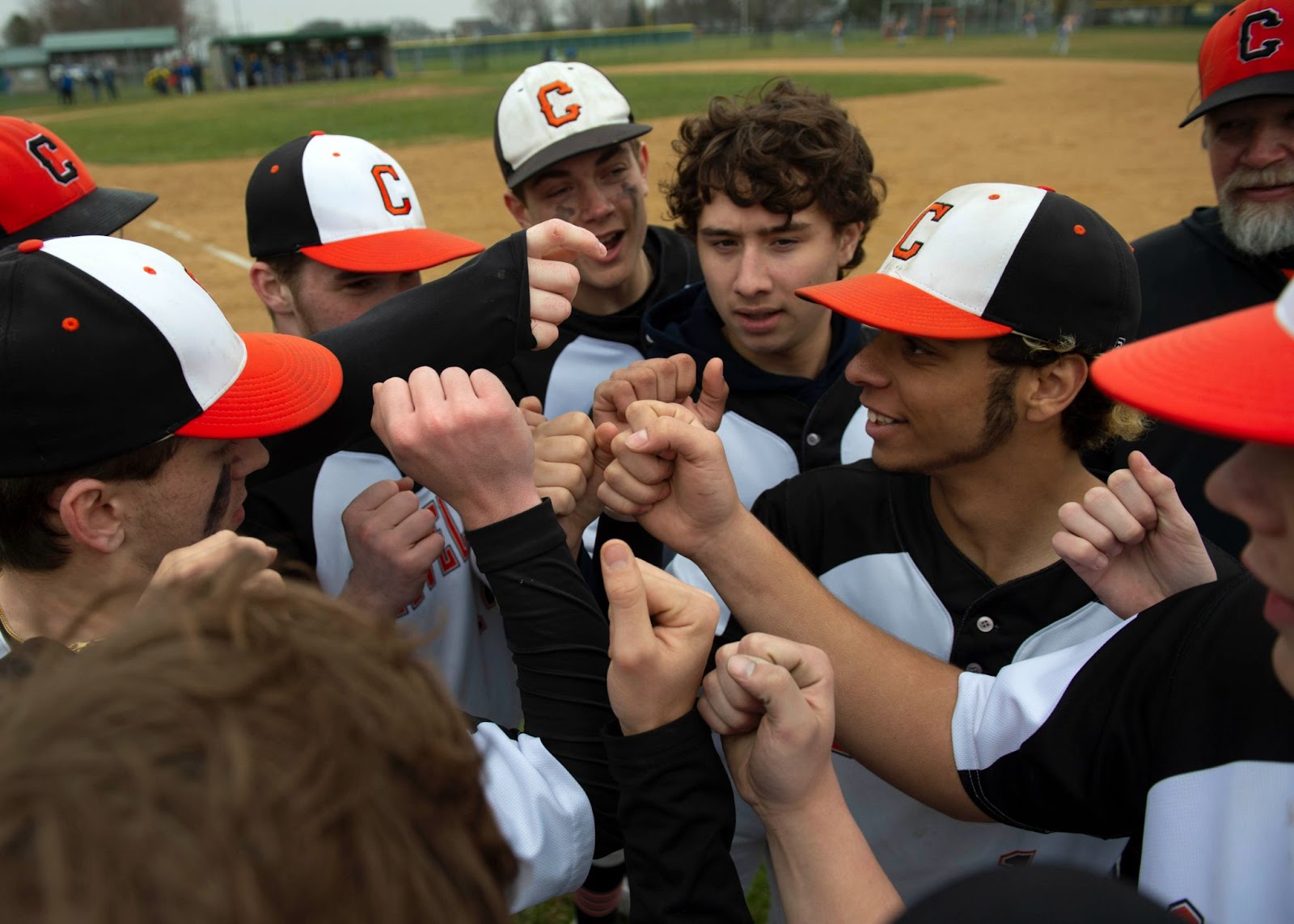 The Clippers celebrate their win over Loyola.