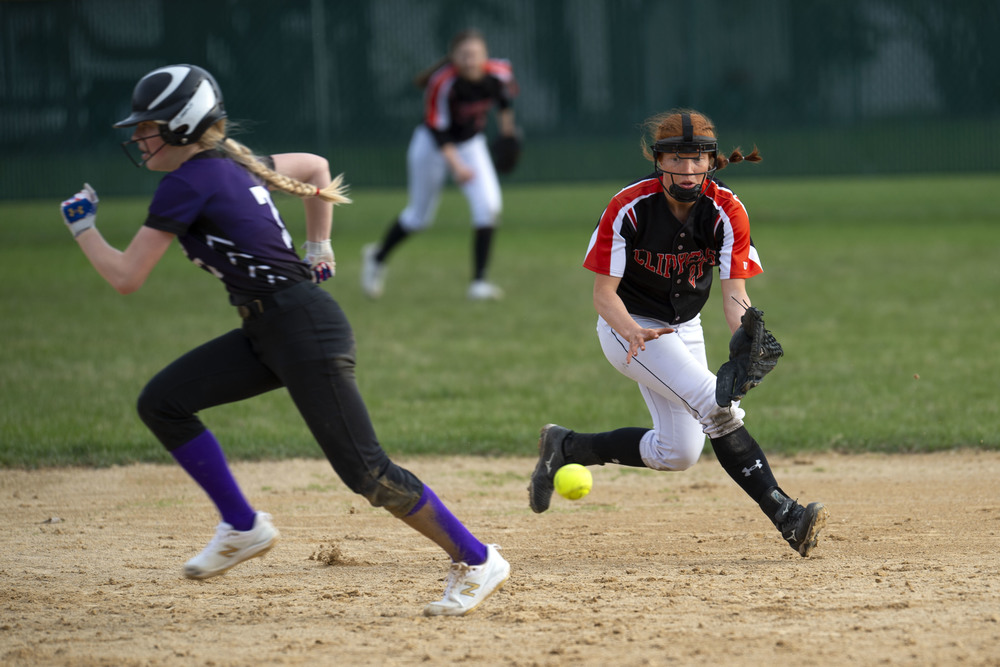 When Cassandra Connor mangled her bat during her first plate appearance in Cleveland 10, visiting Martin Luther, Granada-Huntley-East Chain/Truman 2 on Thursday, it was only natural that she looked to her older sister to borrow another one.

But Ashley Connor may have trouble getting her Louisville back as her younger sibling ended the night 3-3.

Putting an exclamation point on her effort, she airmailed an outside fastball to a back yard somewhere beyond the left field scoreboard for a sixth inning three-run homer that put the game out of reach for the Jaguars.

“I didn’t really watch it, said the sophomore. “I was too busy running around.”

The conference triumph was a good way to end a tough stretch for the Clippers, who fell on Monday 9-3 in Mountain Lake before getting shutout 15-0 in Nicollet.

“It was a rough week but a good bounce back,” said head coach Mike Barten. “Finally some nice weather, and you could tell the girls were a little more loose. Em (Emily Kern) was throwing with a little more velocity.”

The Clippers got on the board in the second when Emma Sweere (at shortstop above) doubled and scored on a passed ball.

With their only two runs, the Jags took the lead in the third when they strung together a trio of singles.

“Granada is a team that is coming up,” Barten said. “They have some kids who play in the summer, and I know they have a youth program that they’re building, so down the road they will be up.”

The Clippers responded though, scoring a pair of runs in the bottom of the third to take a lead they wouldn’t relinquish.

Sophie Shouler’s speed forced the shortstop to throw the ball into the dirt at first base. She made it all the way to third on the play and then crossed the dish on a Kern sacrifice fly. Harley Connor walked. Running for her, Ava Hahn swiped second and scored on passed balls.

Kaylee Karels led off the fourth with a double, advanced on a ground out and touched home plate when a pitch got by the catcher for a 4-2 Clipper advantage.

The Clippers added three runs in the fifth. Cassandra Connor led off with a walk, stole second, moved to third on an escaped pitch. After a Sweere single, Laci Hollerich singled for an RBI. Lexi Waldron’s sacrifice fly scored Sweere, and Karels singled to bring Hollerich home.

Kern led of the sixth with a walk, and Harley Connor singled before Cassandra Connor’s three-RBI blast.

Kern went all seven innings on the rubber. She struck out seven, allowed seven hits and walked one. Behind her, the Clippers only errored once.

On an error in the first inning, Harley Connor was the only Clipper to get on base against Nicollet, now ranked third in the state. They struck out nine times in four innings of play…to pitcher Hayley Selby instead of the usual Mara Hulke.

The Raiders accumulated nine hits on Kern over an inning and two thirds. Hailey Plonsky stepped in after that and allowed seven hits. Kern stuck out one. Plonsky struck out two. The Clippers had two errors.

“They were hitting,” Barten said. “There’s nothing you can do about that.”

The Clippers got on board first when Kern doubled, and, on the base paths as a courtesy, Hahn scored on a Cassandra Connor double. Mountain Lake responded with two runs on two hits and a Cleveland error to go up 2-1 after one.

On an error, a pair of passed balls and a Harley Connor ground out, Sweere crossed the plate in the second to knot the contest at two.

The Wolverines took charge in the third when they scored five runs on three hits and a pair of Clipper miscues. The last run walked home. The Clippers ended the inning on a double play when shortstop Shouler gloved a fly and relayed it to Hollerich on her right.

Kern hit a solo homer in the fifth for the final Cleveland run. After three singles, Mountain Lake added a pair of runs in the same inning.

Hits for the Clippers came from the top four in the order. With a home run and a double, Kern hit the ball hard. Cassandra Connor and Grayce Kortuem each had a double. Shouler had a single.

The Clippers struck out four times and walked twice.

“It was a little disappointing against a team that I think we can compete with,” Barten said. “The score 9-3…we were closer than that.”

The Clipper took third in the conference behind leader LCWM, although Nicollet, which fell to the Knights 3-2 in its only loss, still must take on St. Clair/Loyola.

The Clippers will travel to Madelia on Tuesday for a non-conference game. Cleveland edged the Blackhawks earlier in the season. 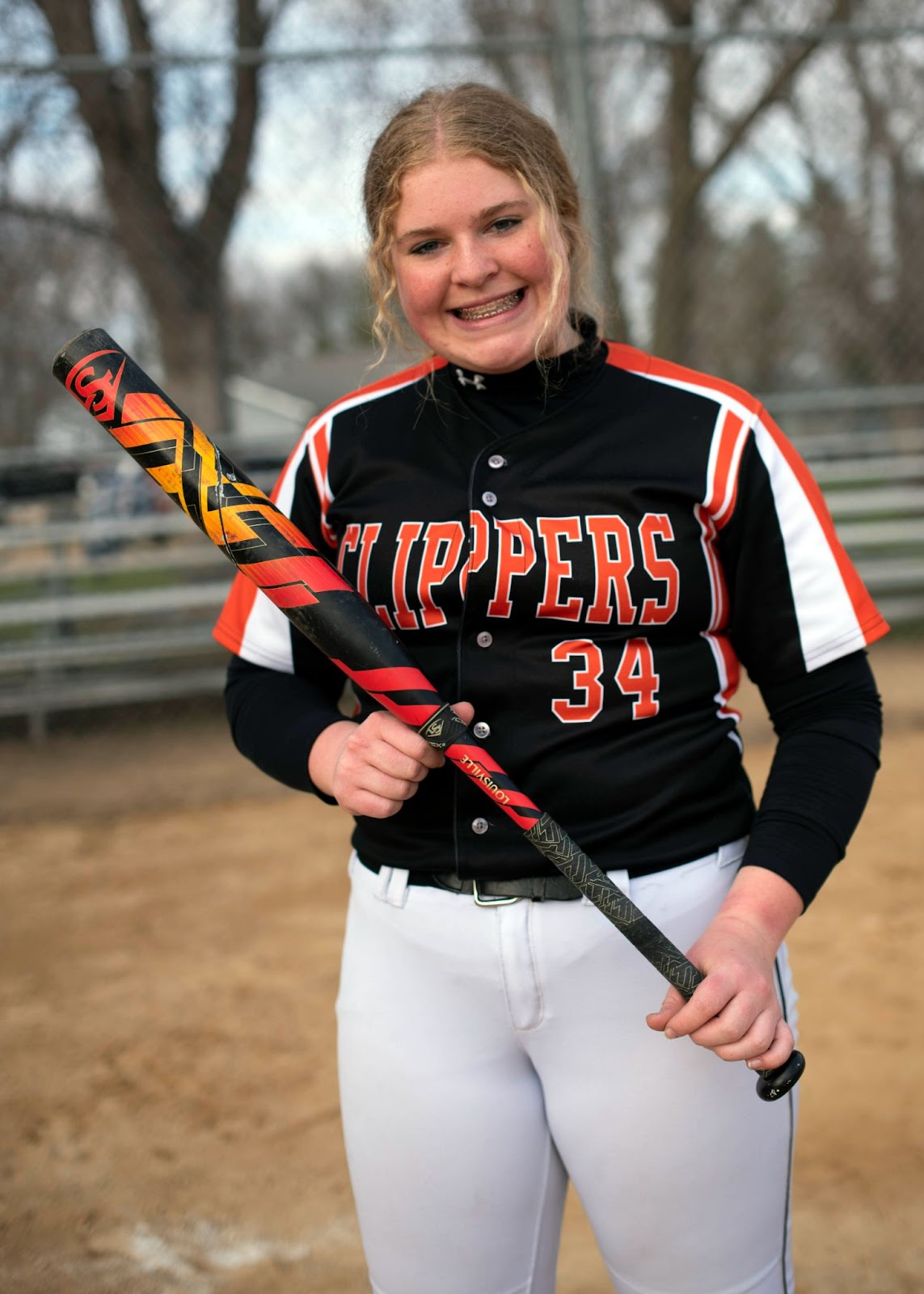 Cassandra Connor will decide if she wants to keep using her sister’s bat or replace hers. She was 3-3 for the night with a three-run homer and a walk. 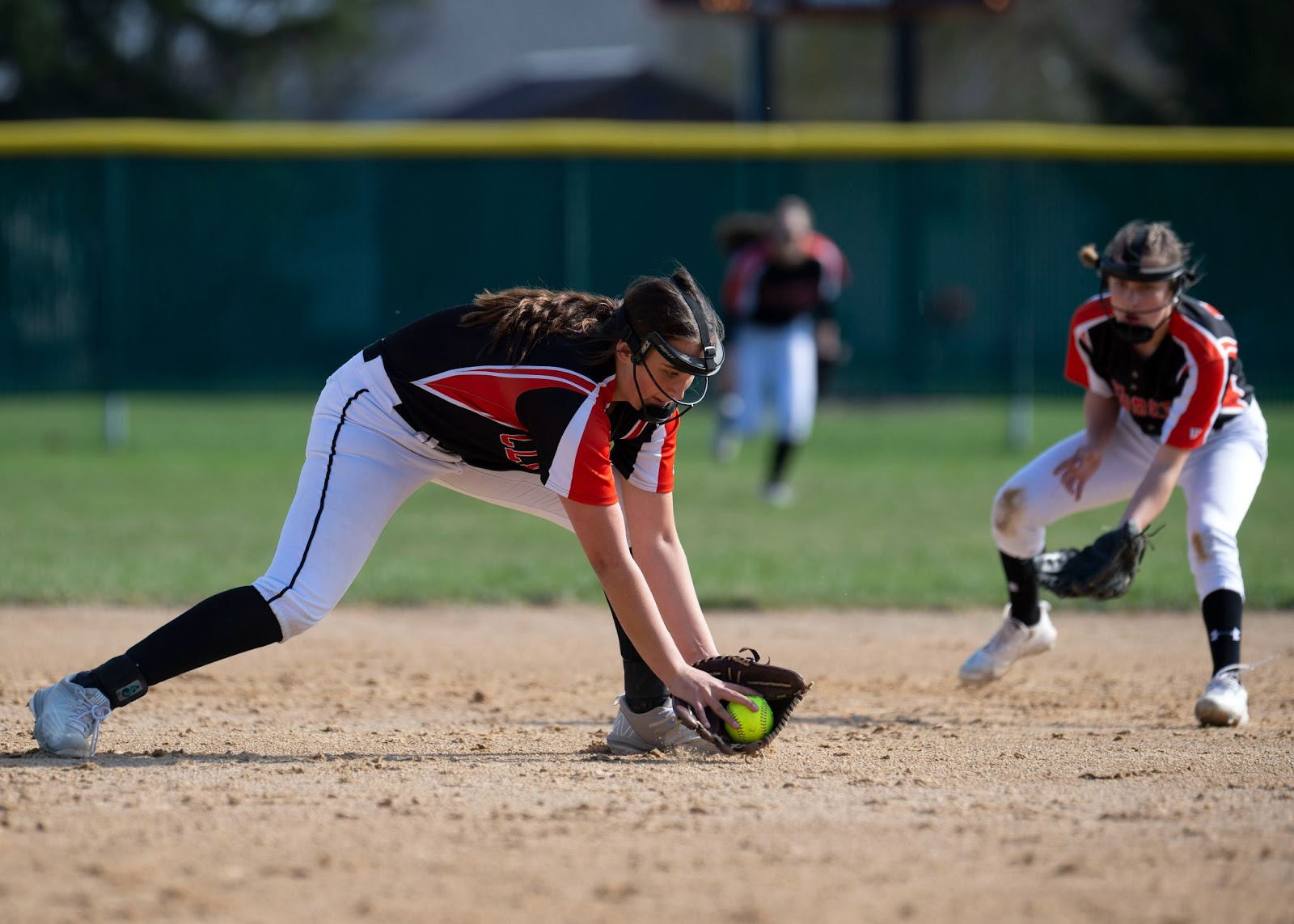 Laci Hollerich bends for a grounder. Backing her is Sophie Shouler, who started at shortstop. 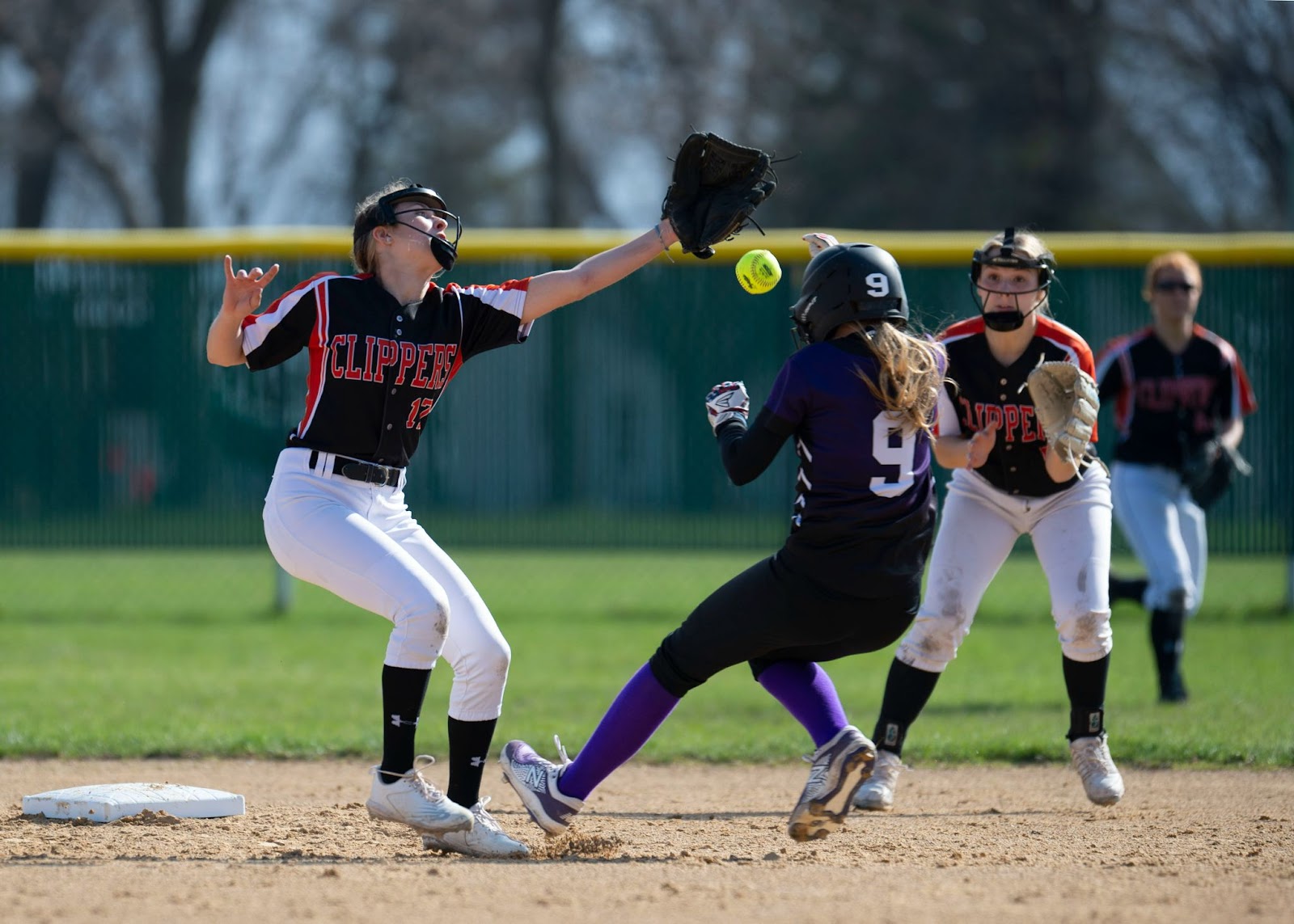 Sophie Shouler reaches for a throw to second on a steal. On the backup is Kaylee Karels. 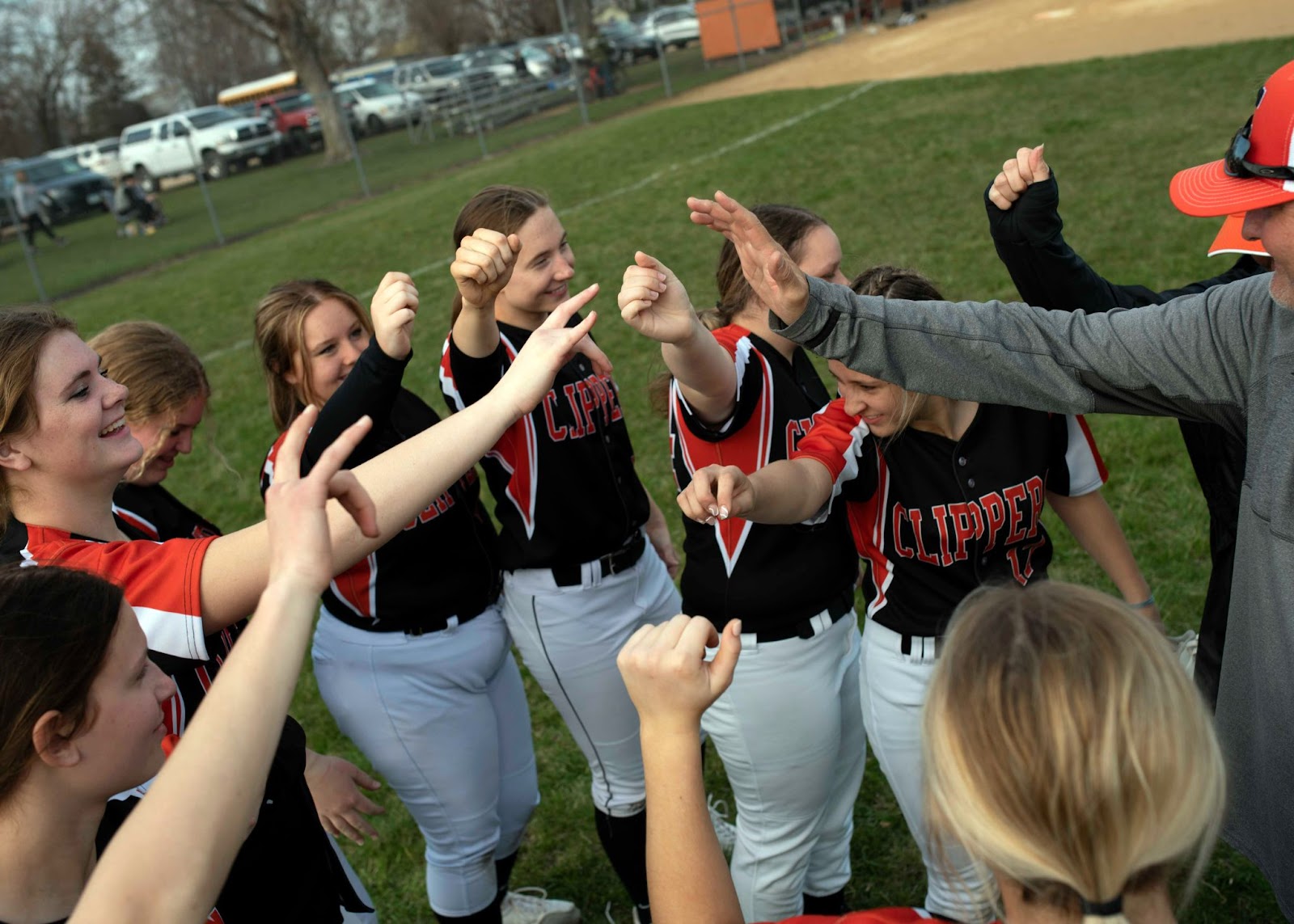 The Clippers come together after the victory.