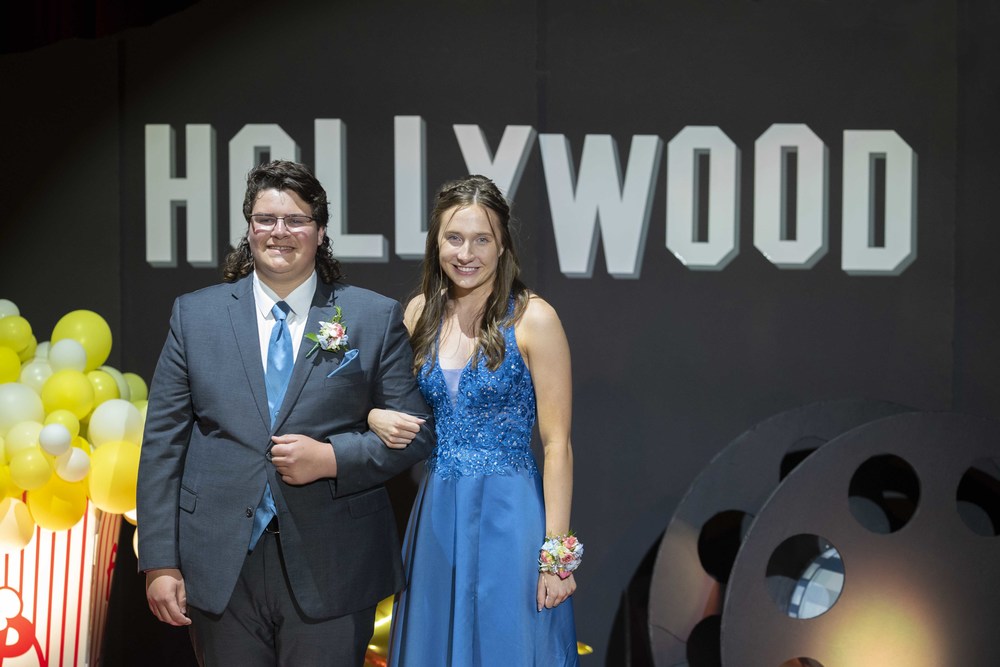 A year ago, Martin Gibbs scorned the idea of ever attending a high-school prom.

More individual than social, he’d rather have been earning cash at the BP across the highway or knocking down clay pigeons at the Caribou Gun Club.

But 12 months is a long time when you are a teenager, and so on Saturday, Gibbs, now a junior, dressed to the nines, purchased a corsage and attended the formal gala, held at the school on Saturday. Escorting classmate Lexi Waldron (above), Gibbs was part of 42 couples who participated.

“Out of the blue, I had Lexi on Snapchat, and she snapped me and asked if I was going to prom,” Gibbs explained. “I was like ‘no, I wasn’t planning on it,’ and then she didn’t respond back, so I asked her ‘do you want to go to prom?’ and she was like ‘yeah,” so it was kind of cool.”

As for Waldron, she said even in this electronic age, it is not common to ask someone out via electronic messenger. It is her first prom too.

“I was a bit nervous, but it was fine, I guess. It’s been really fun…the dancing.”

Gibbs rented a tuxedo from Nutters clothing store in St. Peter. He had never been that dressed up before.

“All day in a tux…that’s a lot of work. It was kind of uncomfy at times, but you just got to push through it. But my feet really, really hurt, so I cheated the system and went down to the locker room and put on Crocs.”

Waldron started her day at 9:00 with a hair and makeup appointment at a spa in St. Peter. She had purchased a dress from a store in the Mall of America. While prom dresses can easily run up into the $600 range, she said hers was not that much.

“Compared to everyone else’s, it was pretty cheap.”

The pair were among a group of 11 classmates who had dinner at Olives in Mankato before the prom. Riding in high style, the group took a limo there and back to the school for the Hollywood-themed grand march in the bleacher-packed auditorium at 7:00.

Following was a dance DJd by the Cleveland’s own Rich Kern. After the dance was a carnival-based after-prom party, which was held in the commons and new gym.

There, a food truck in the parking lot offered corn dogs, cheese curds and mini doughnuts. More carnival food, like cotton candy, along with healthier alternatives could be found inside.

During the after party, teams of promgoers competed in games ranging whack-a-mole to bean-bag toss to knock down the stack of bottles. The tickets they earned from the games went into drawings for prizes, big and small…an X-Box, a TV, an elegant purse, a microwave. The party, which was hosted by junior parents, lasted until 4:00 am.

A decades-old tradition in the US, prom is a coming-of-age event and a celebration of the high school experience. It is also one of the few rites of passage that allows students to exhibit themselves as developing adults. The boys don tuxedos or suits, and the girls wear elegant dresses, discarding any appearance of adolescence…if only for one evening.

Now Gibbs said his opinion on prom is different than it was a year ago, and he is looking forward to attending again next spring.

“My perspective changed. I didn’t really think of it as being with all my classmates. Last year I was more independent, but it’s a lot of fun having an opportunity to do group things.” 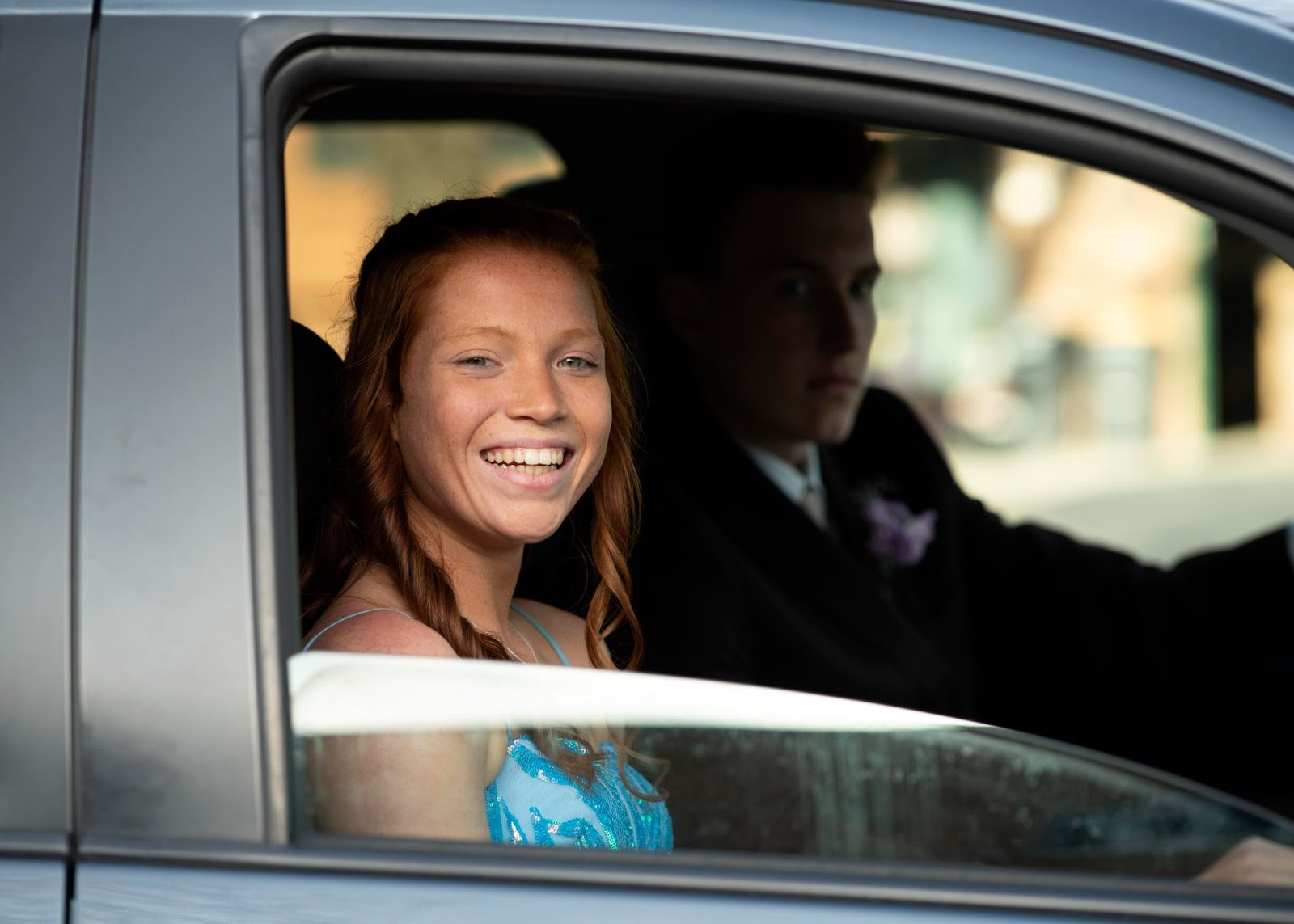 Emma Sweere and her escort pull up to the school for the grand march. 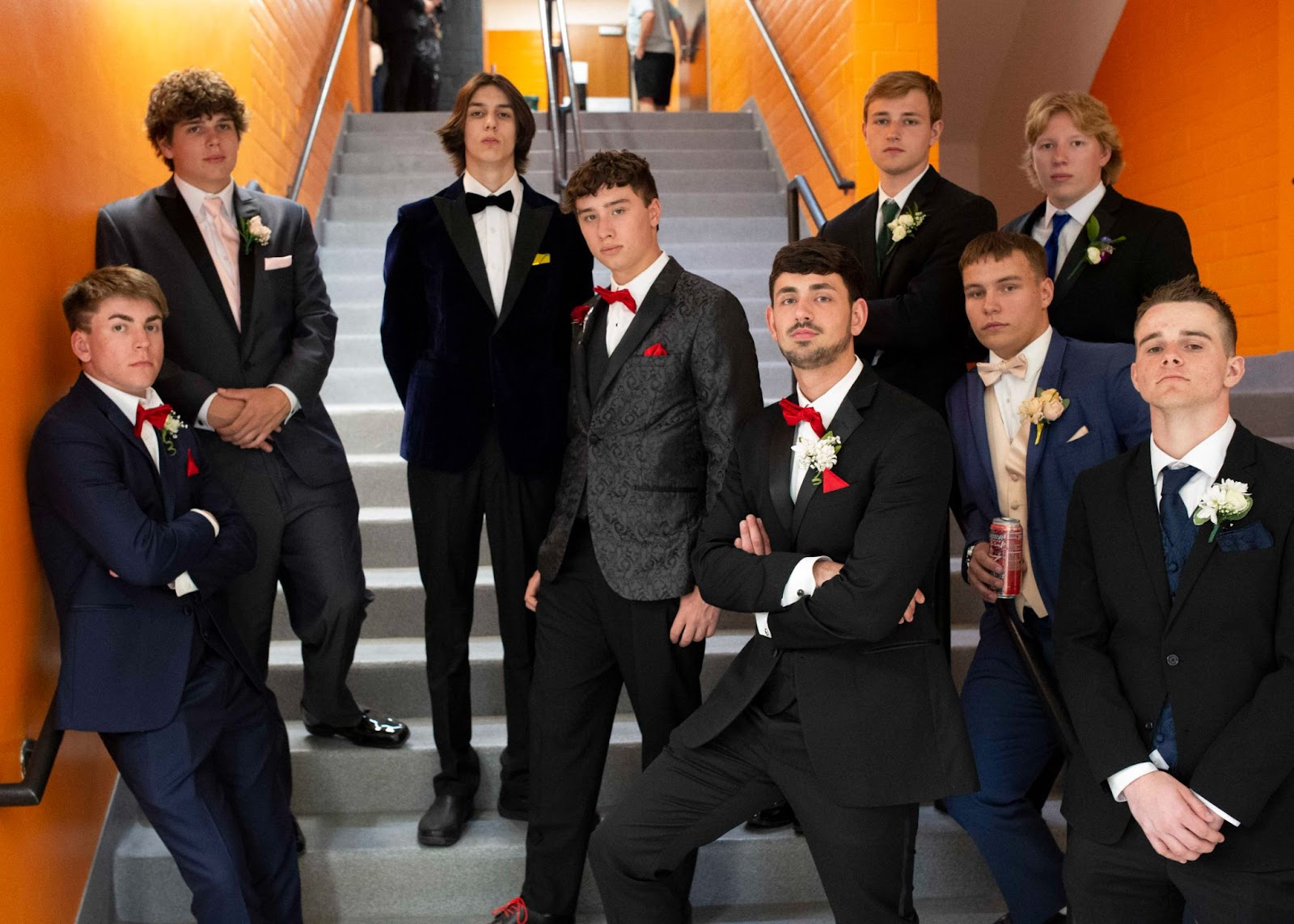 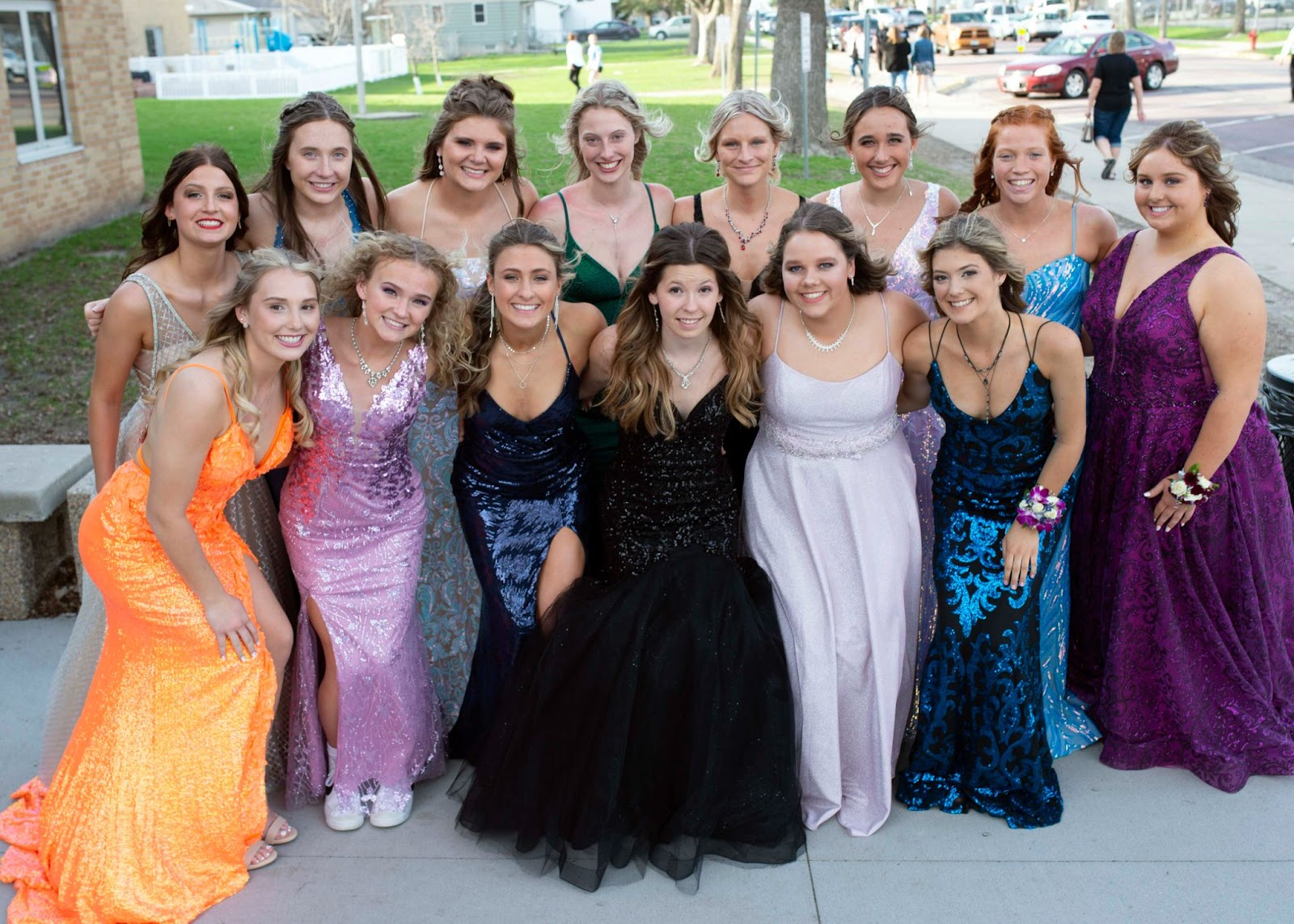 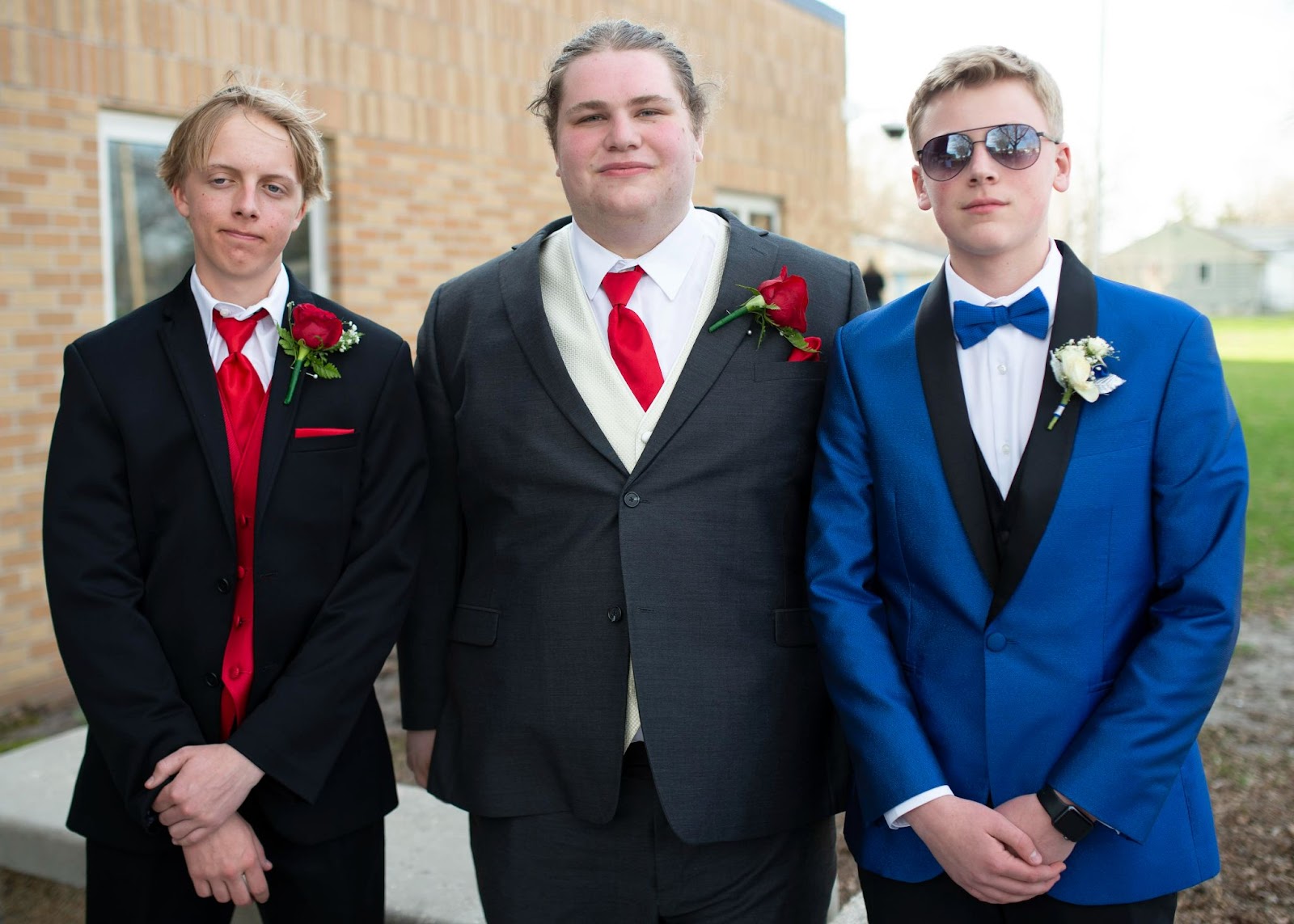 Connor Urban, Jack Schloesser and Nathan Schmoll were dressed up from head… 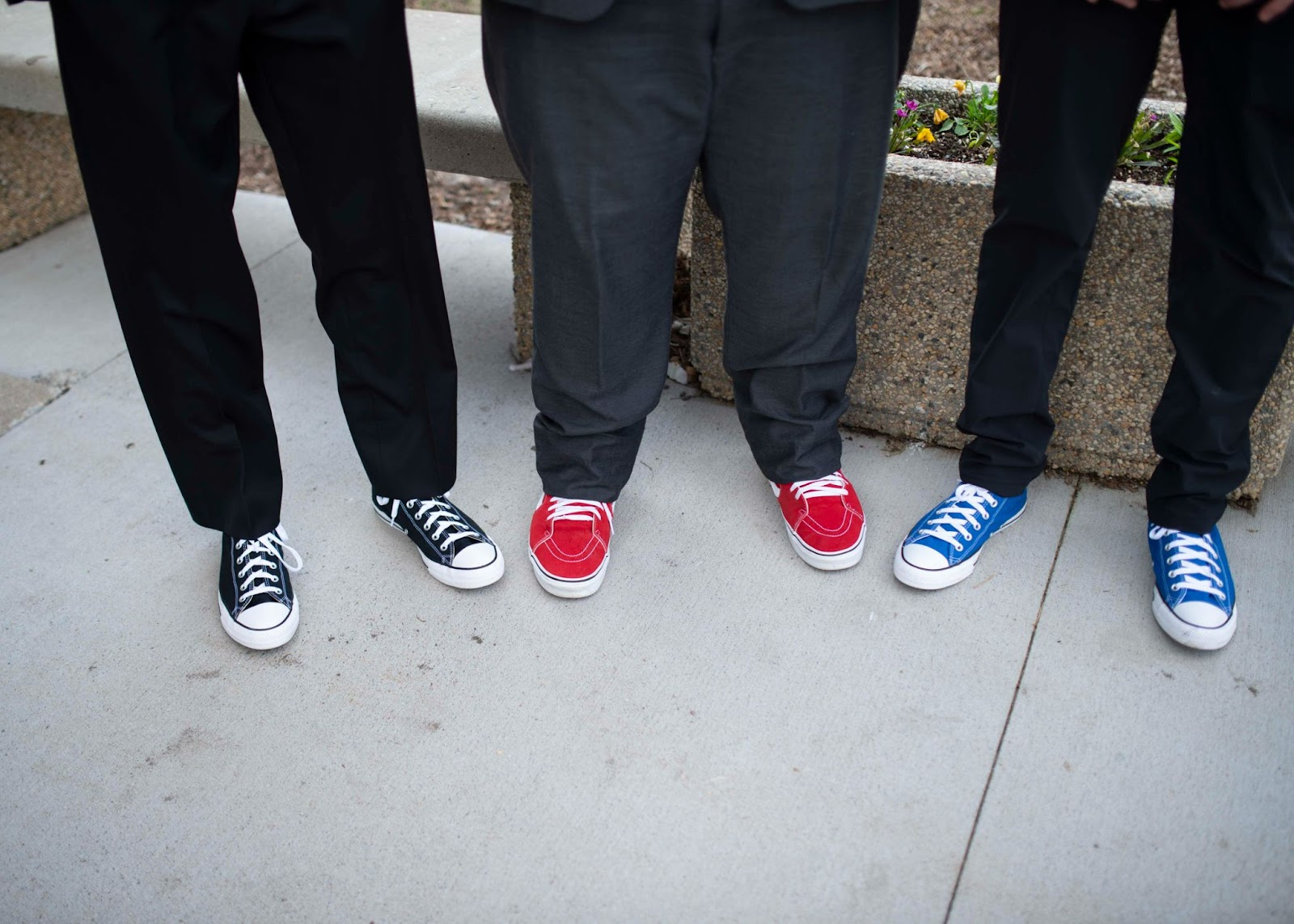 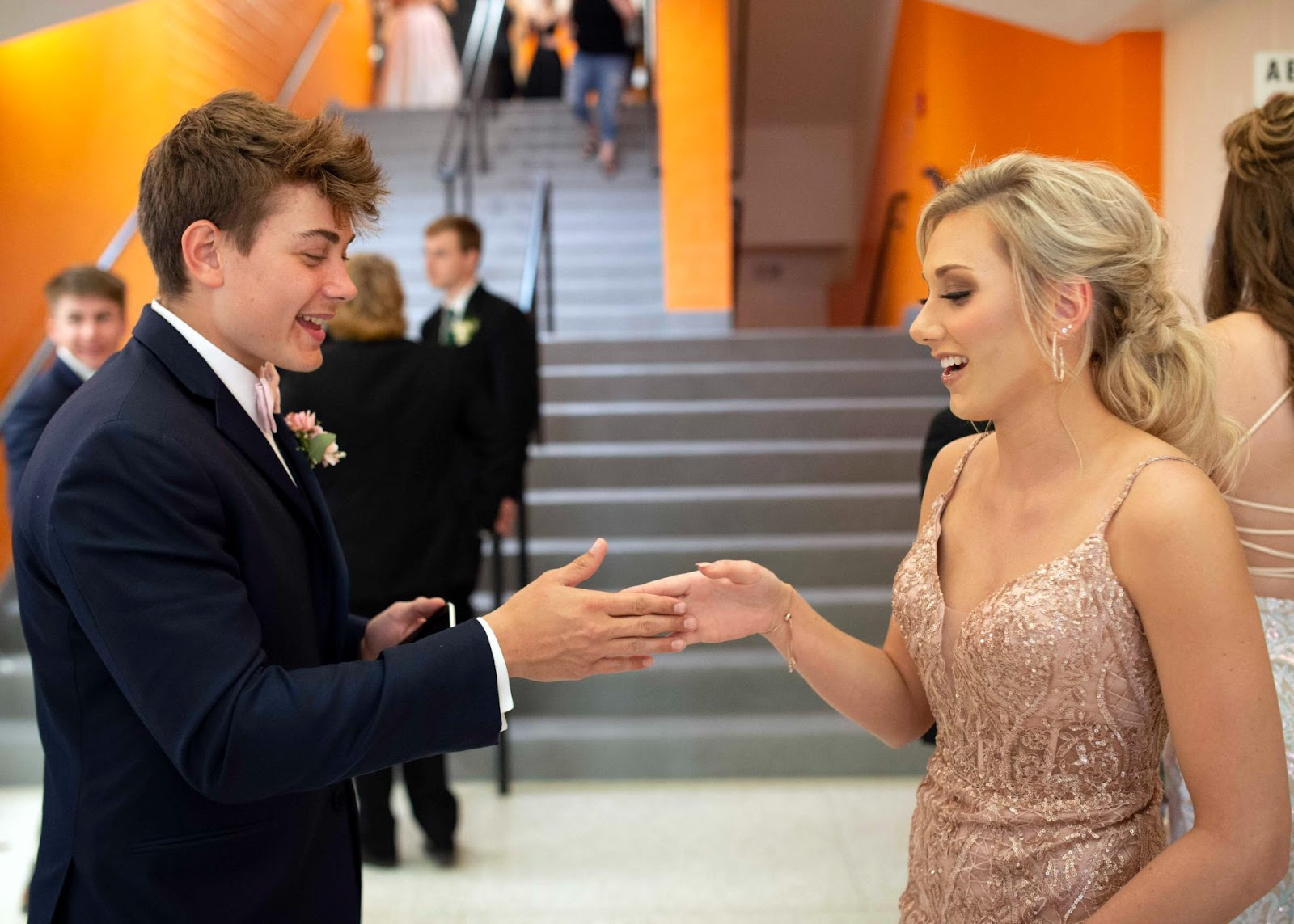 Maddy Steen and her escort Jackson Meyer work out their routine for the third stop of the grand march. 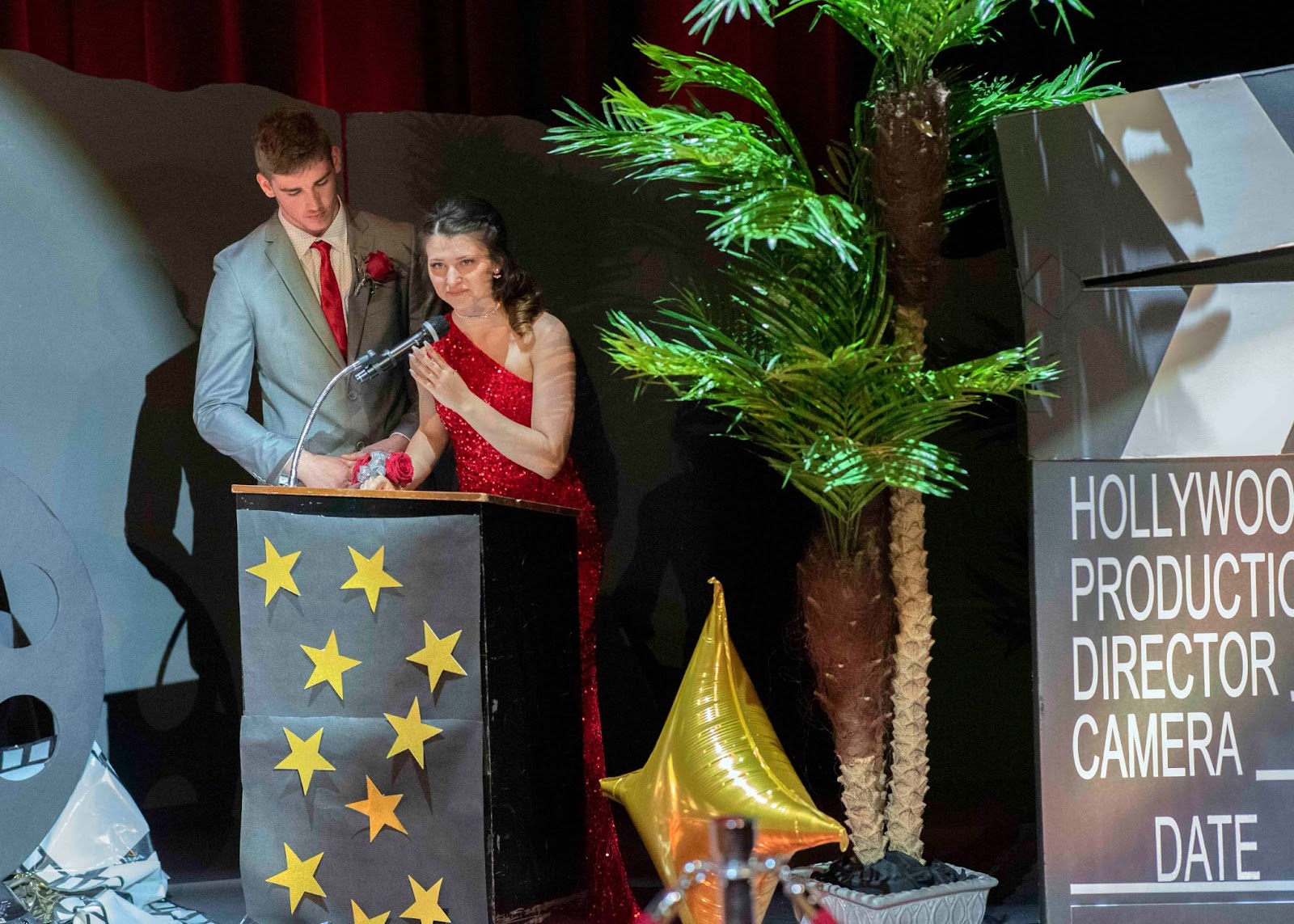 Sophomores Carter Barto and Madysen Seely were the master and mistress of ceremony. 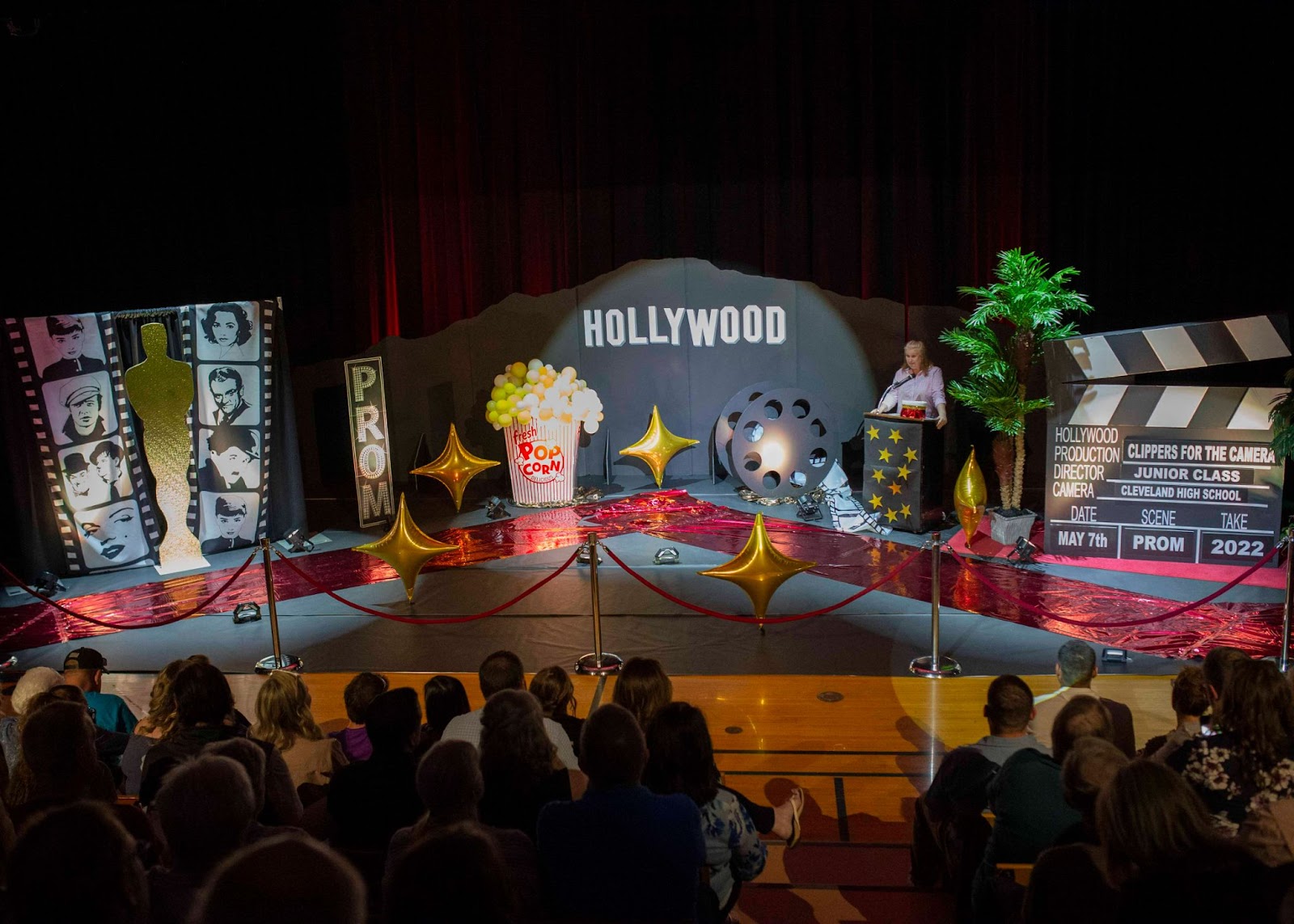 The grand march had a classic Hollywood theme. Here, junior class advisor Lisa Pope thanks all the organizations that helped support the prom. 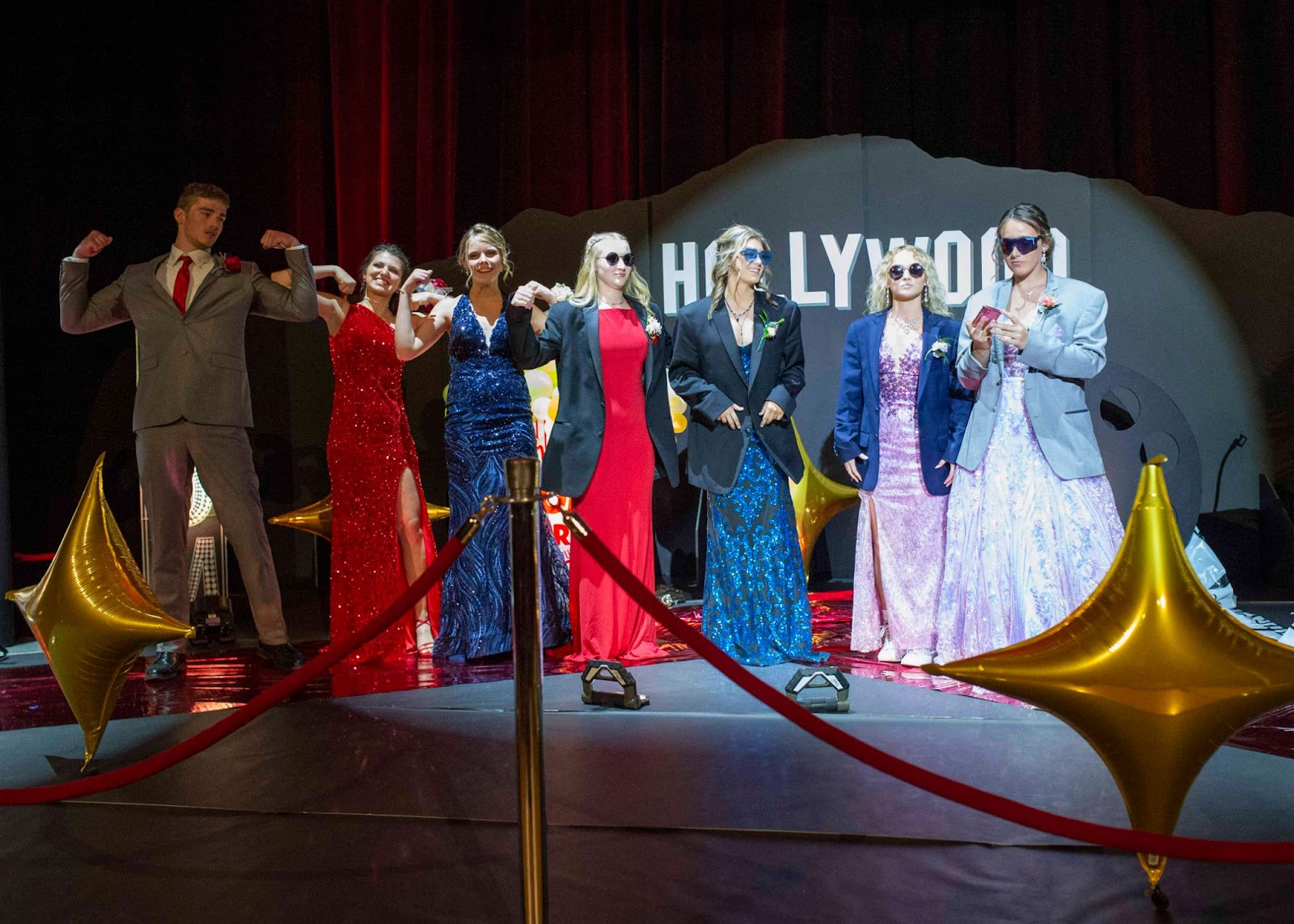 Sophomores pose after the grand march. 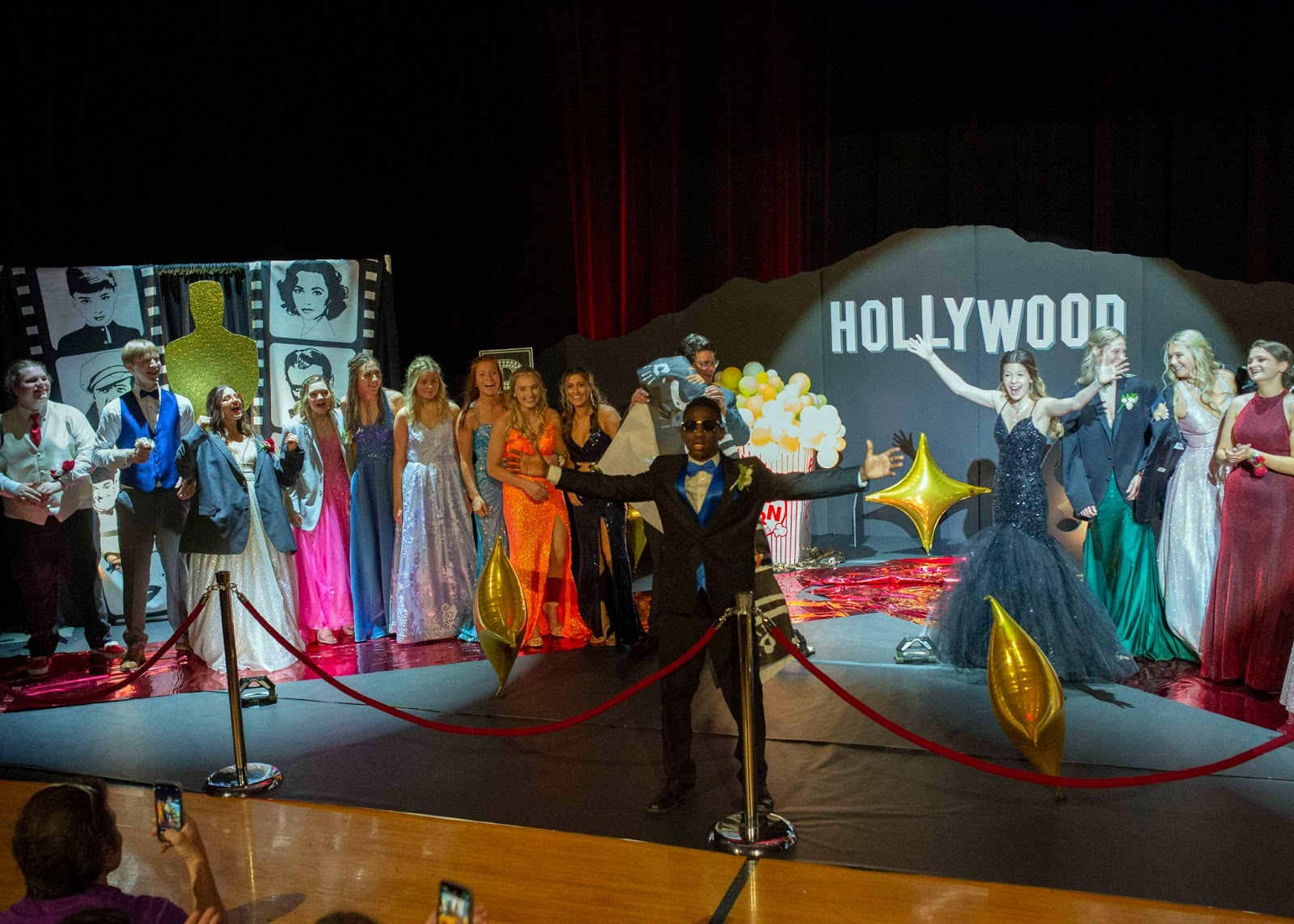 Juniors with Henry Strobel out front. 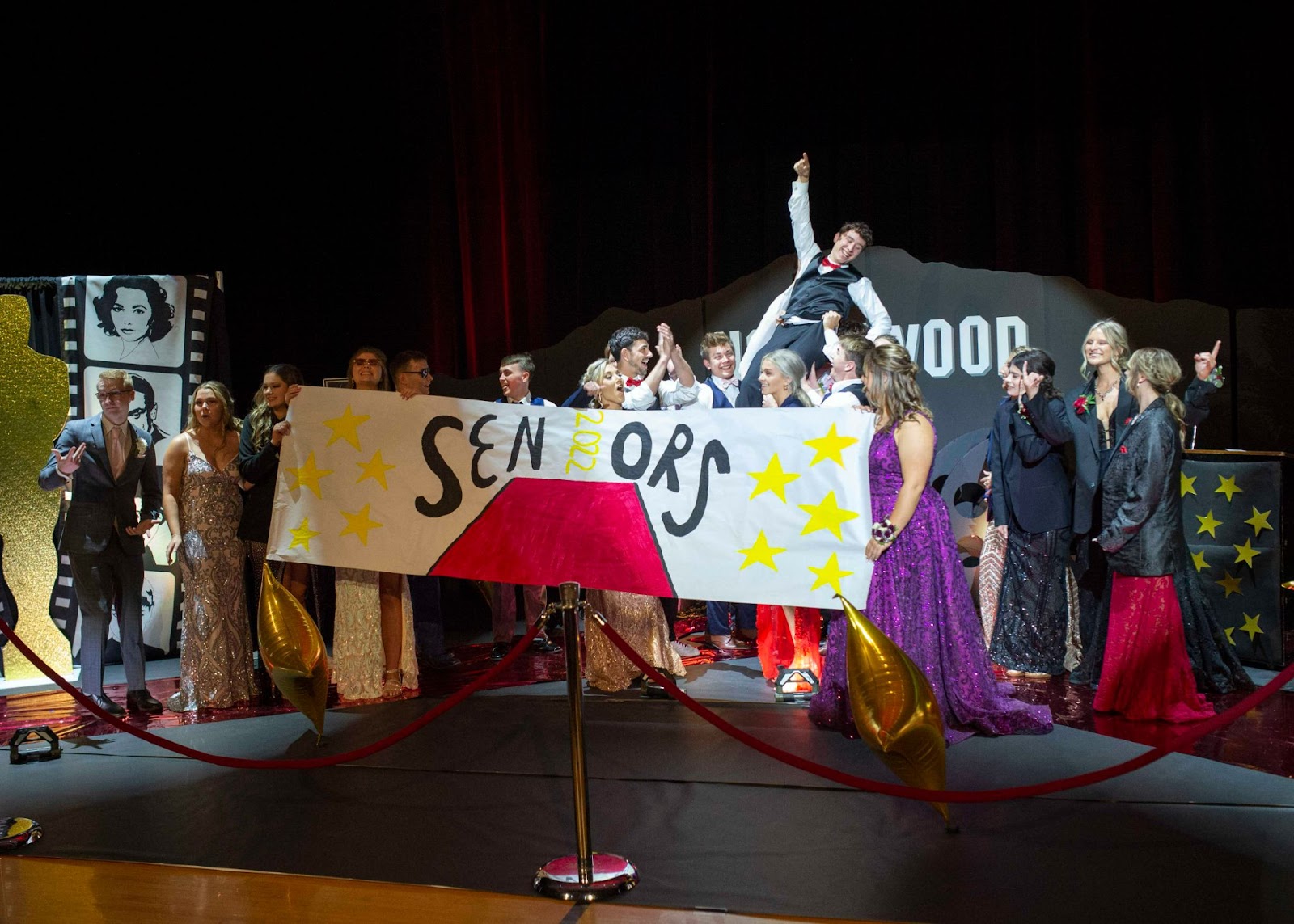 Seniors with Ethan Fuller hoisted up. 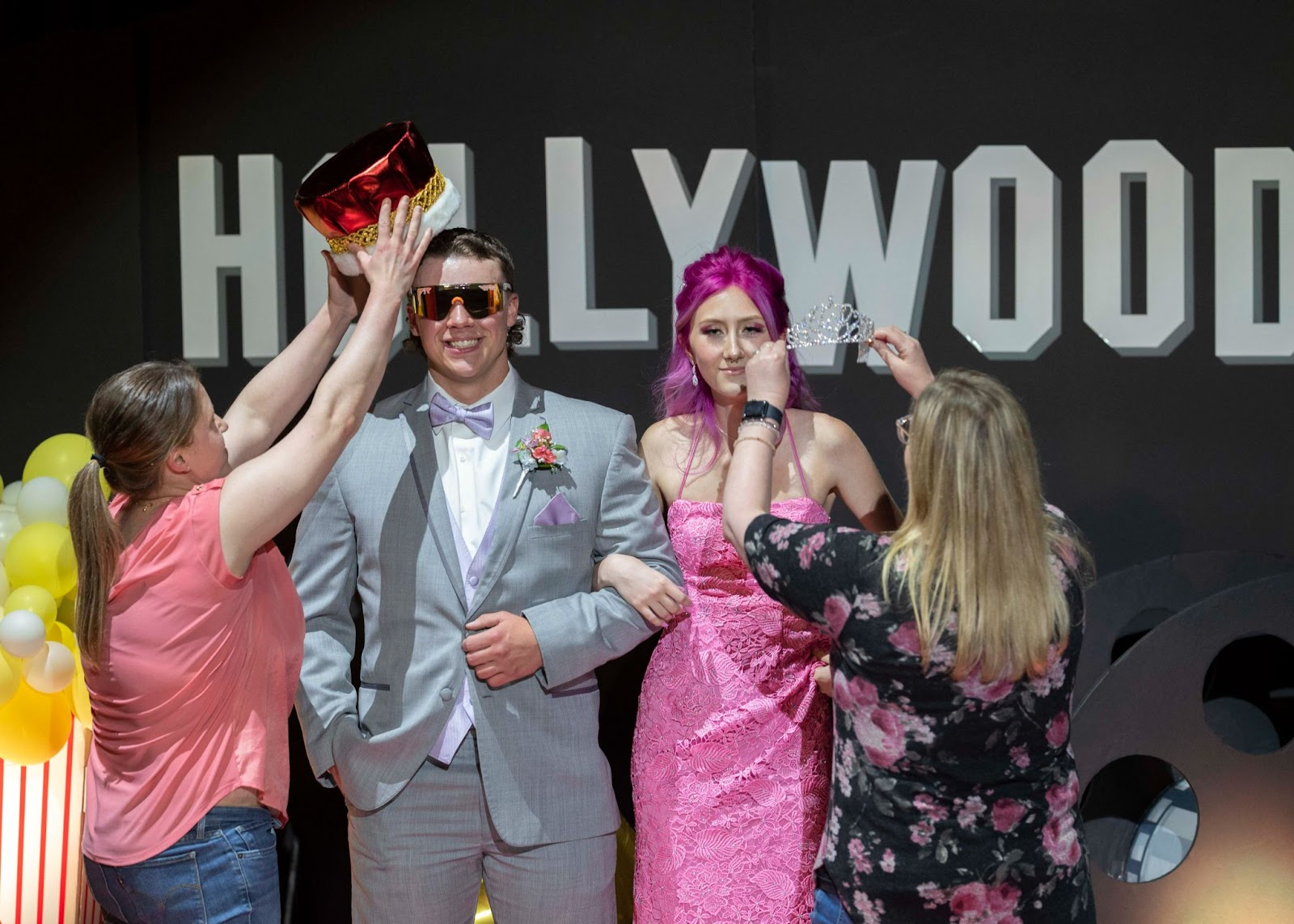 With their names drawn out of a hat, Tanyon Hoheisel was prom king while Mya Dent was prom queen. In honor of Mother’s Day, their moms did the crowning. 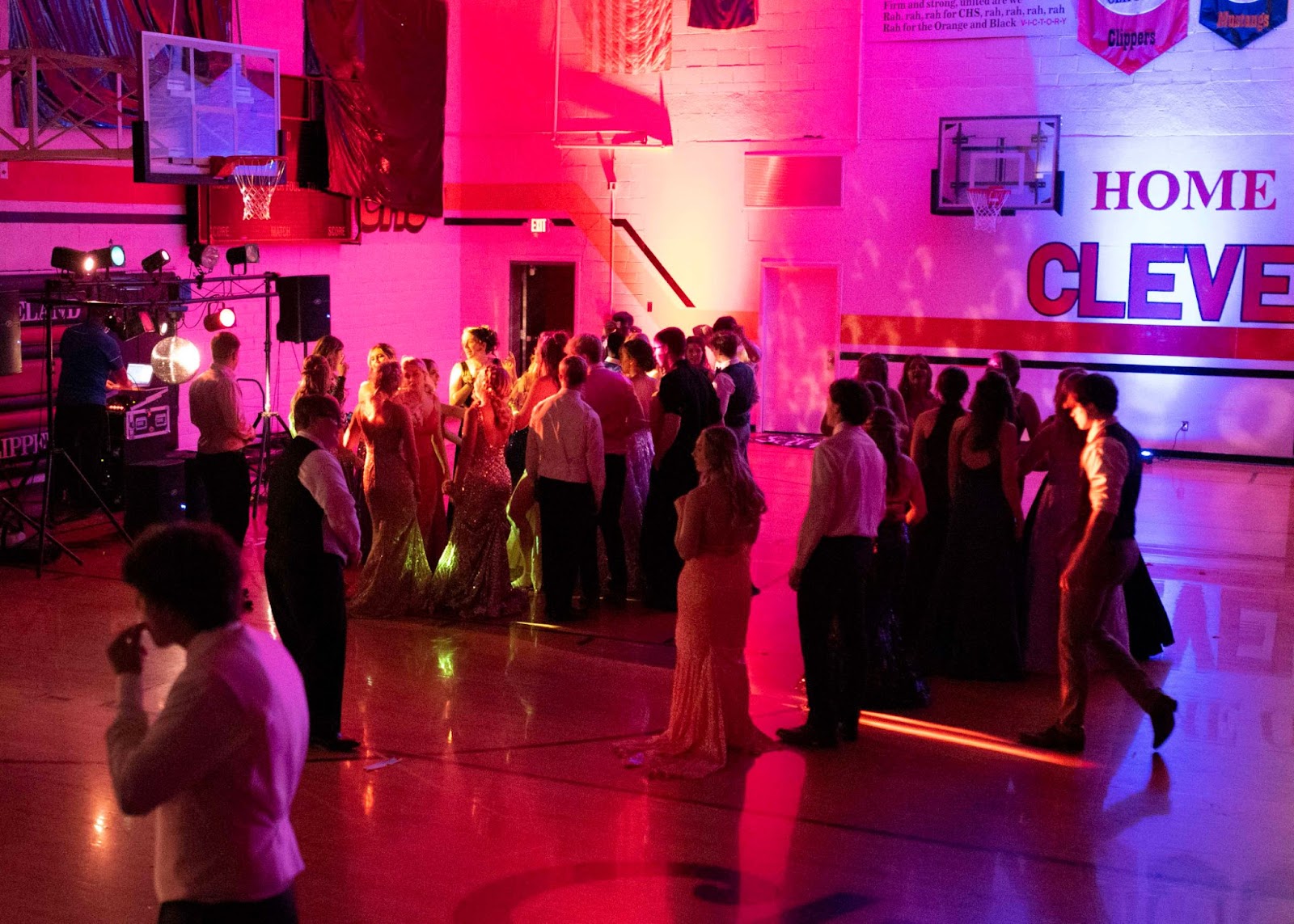 After the grand march, the props were cleared for a dance in the old gym. 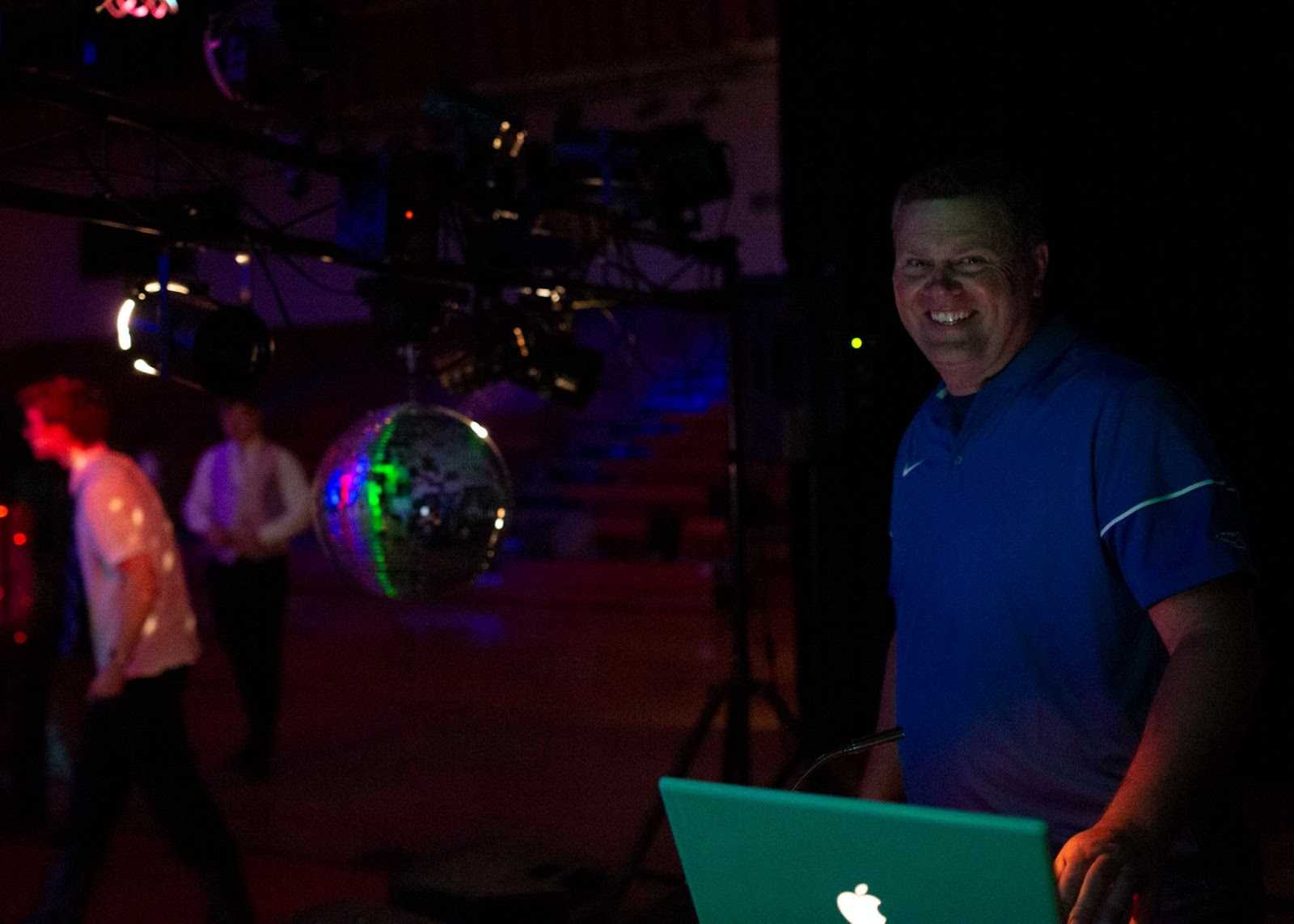 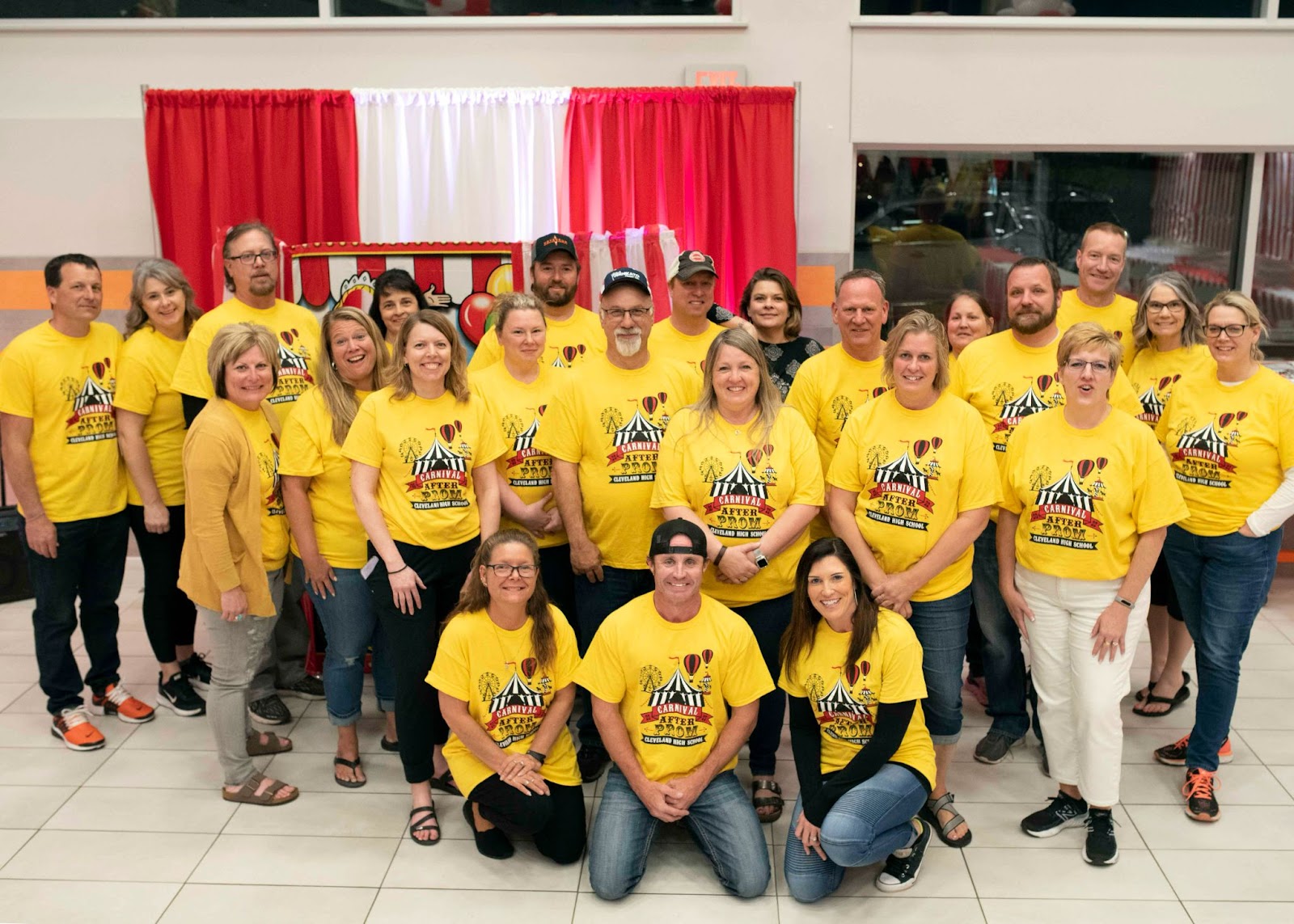 It took an army of junior parents to prepare the after-prom party and make sure it went off without a hitch. Planning started last November. 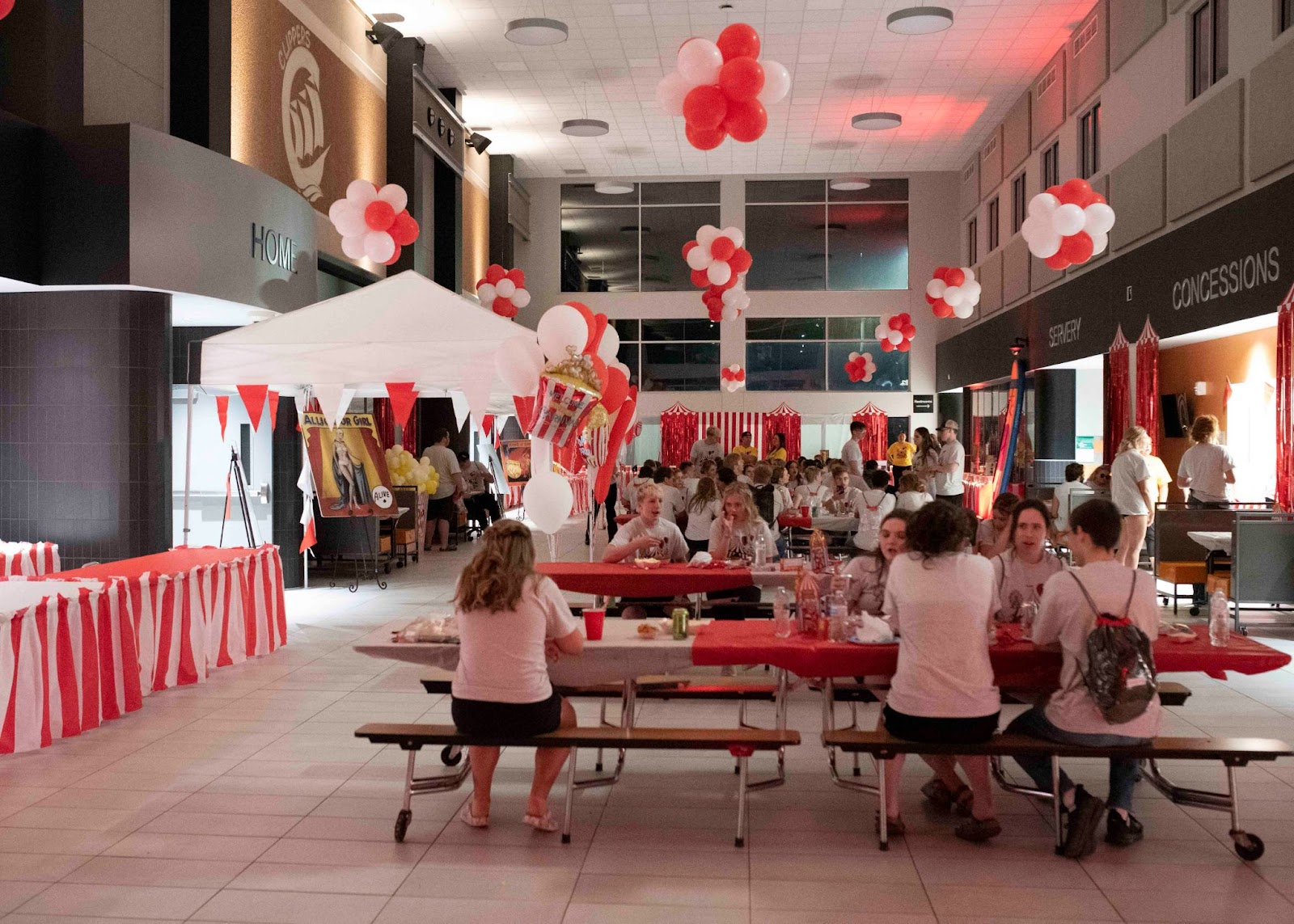 The commons had a carnival theme for the after-prom party. 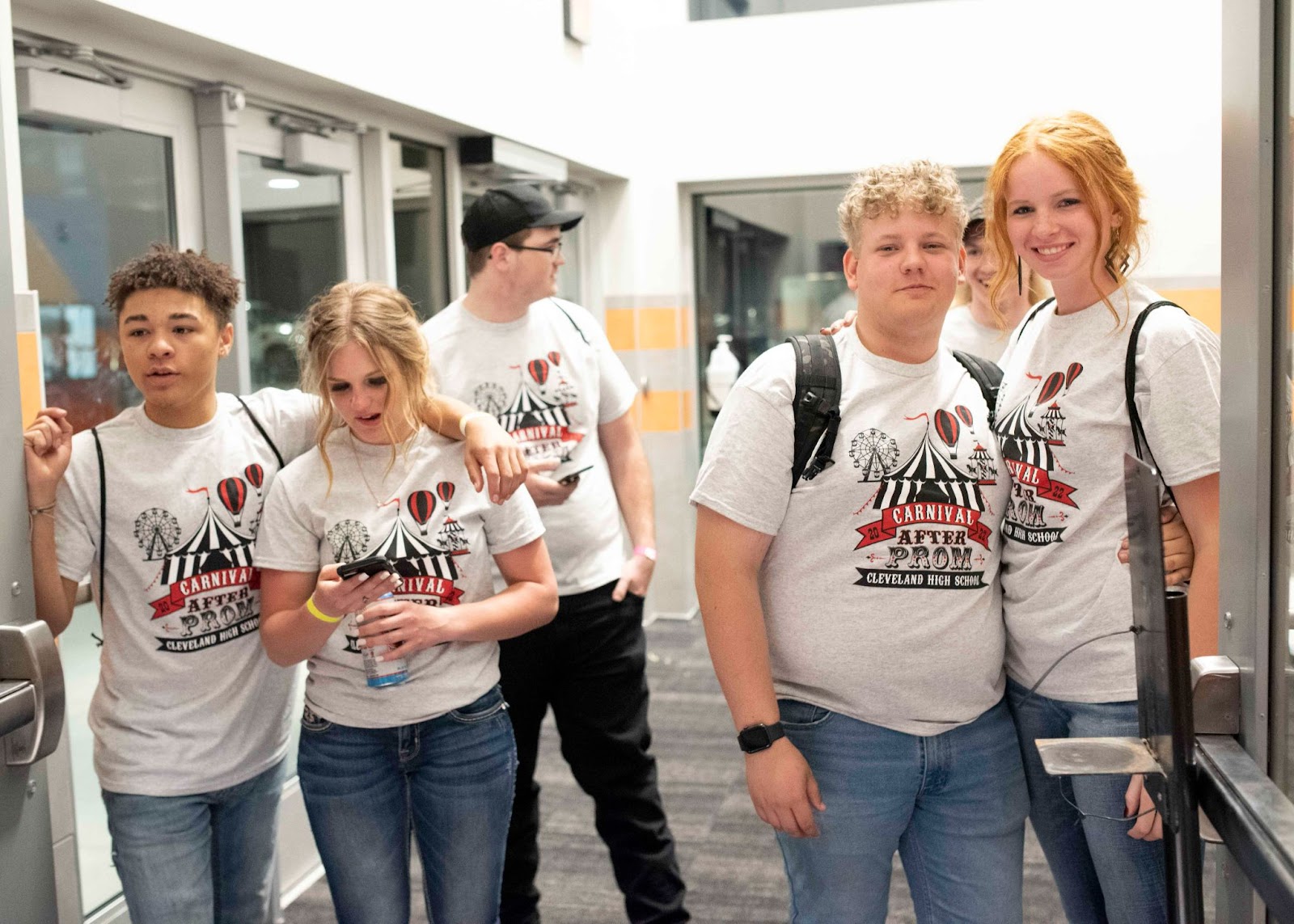 Some couples bypassed the prom and went straight to the after party. 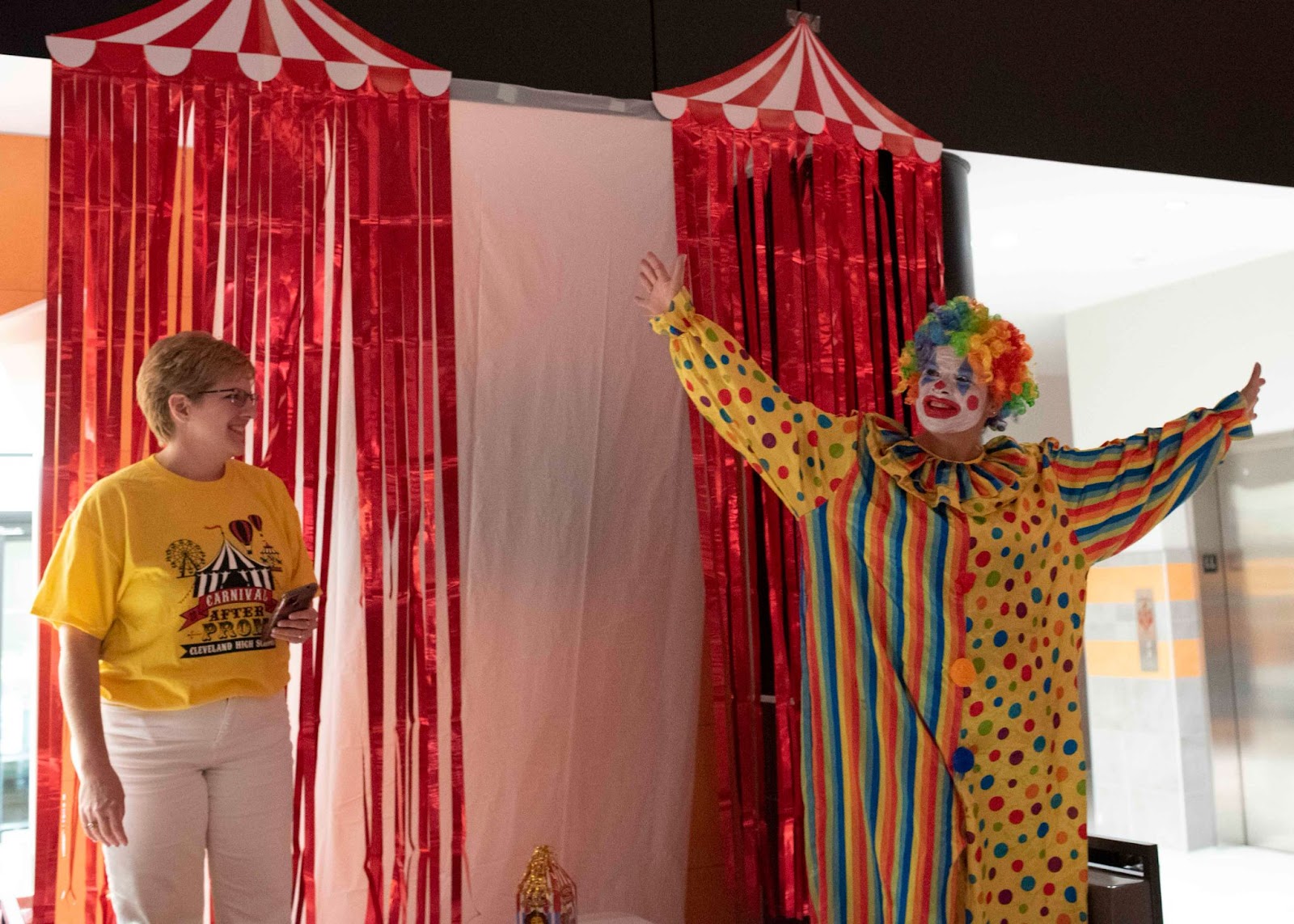 Organizers Peggy Peterson and Jess Shouler in the clown costume explained to attendees the workings of the after party. 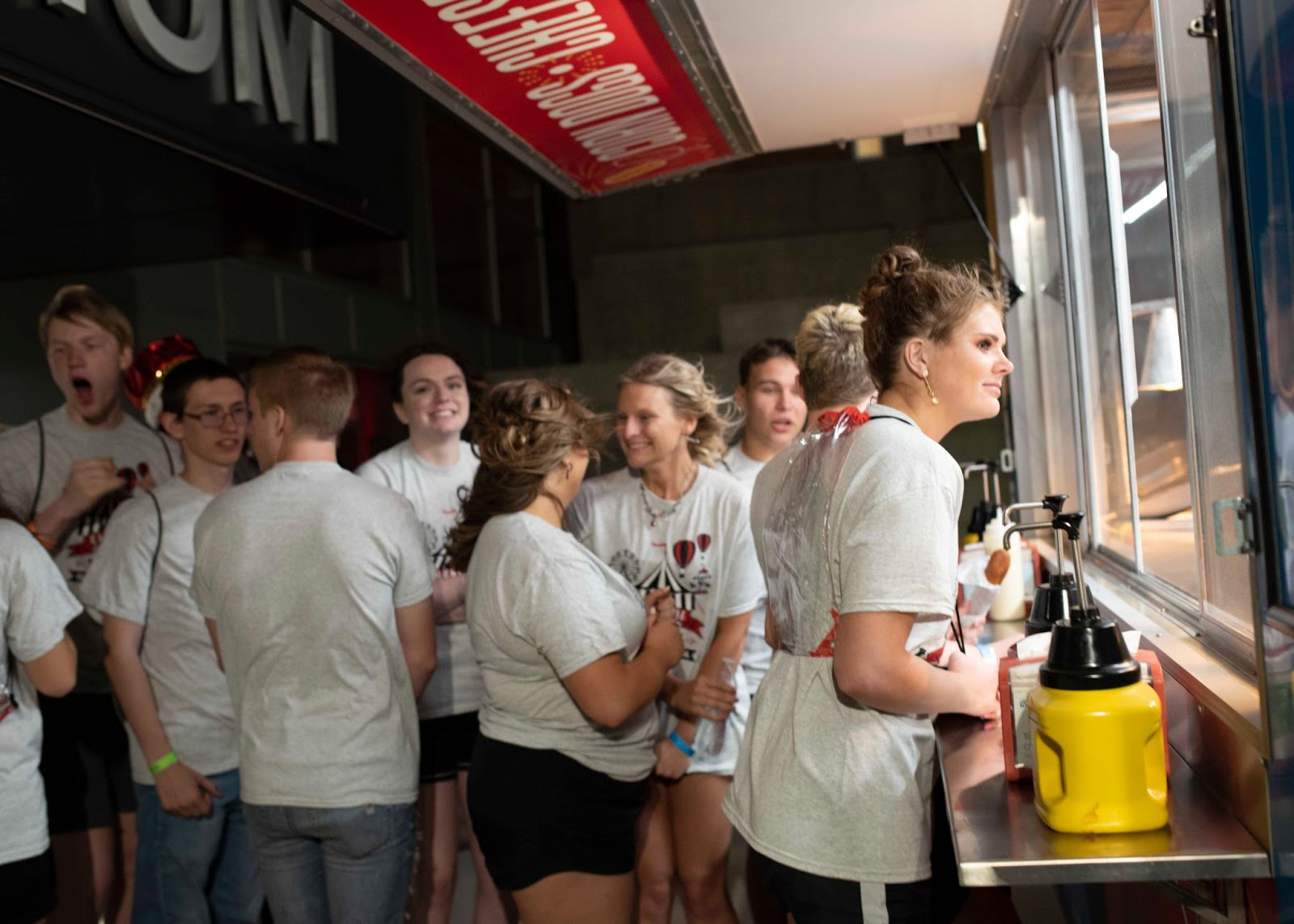 After-party attendees brave the cold outdoors to line up for the food stand. 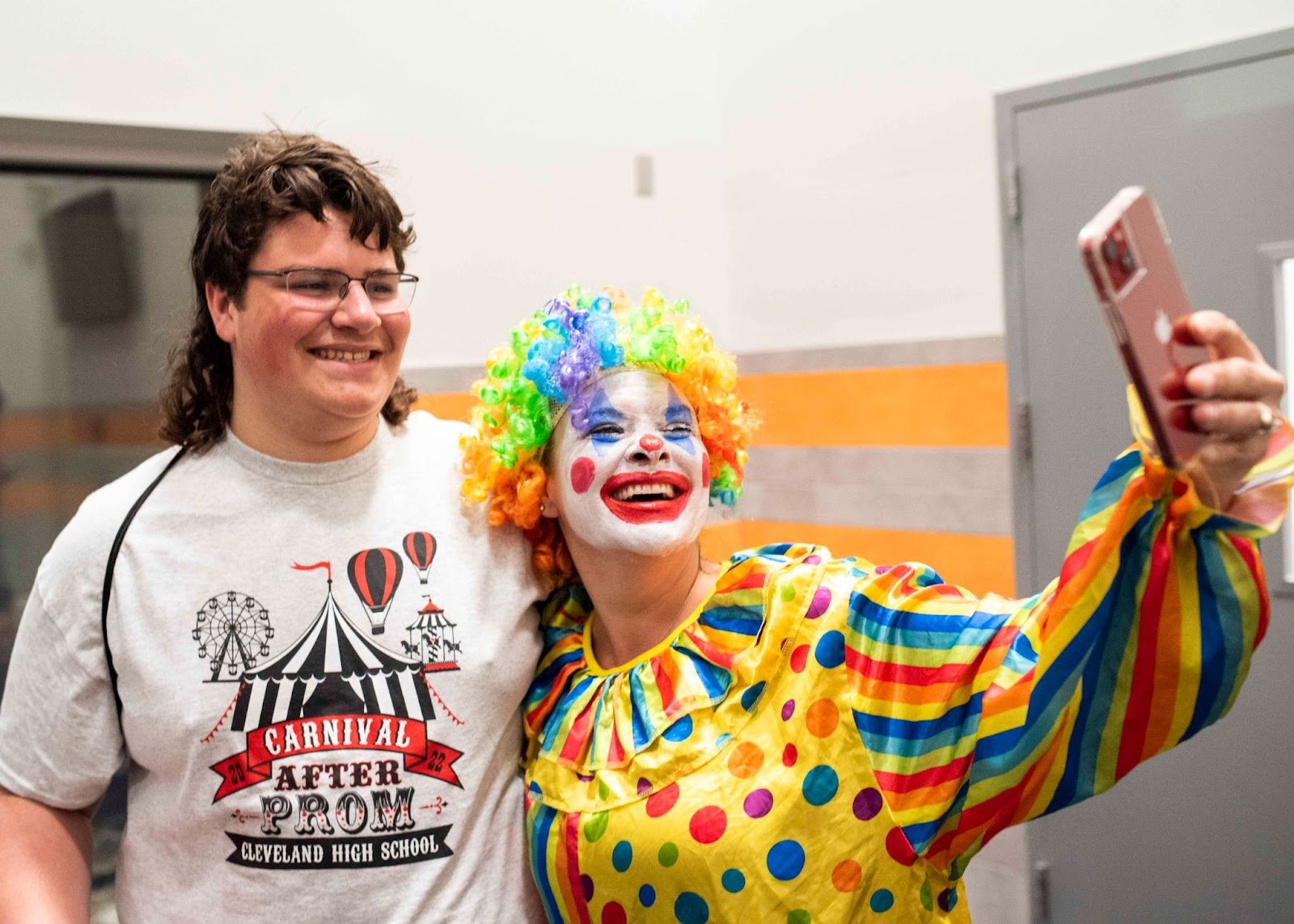 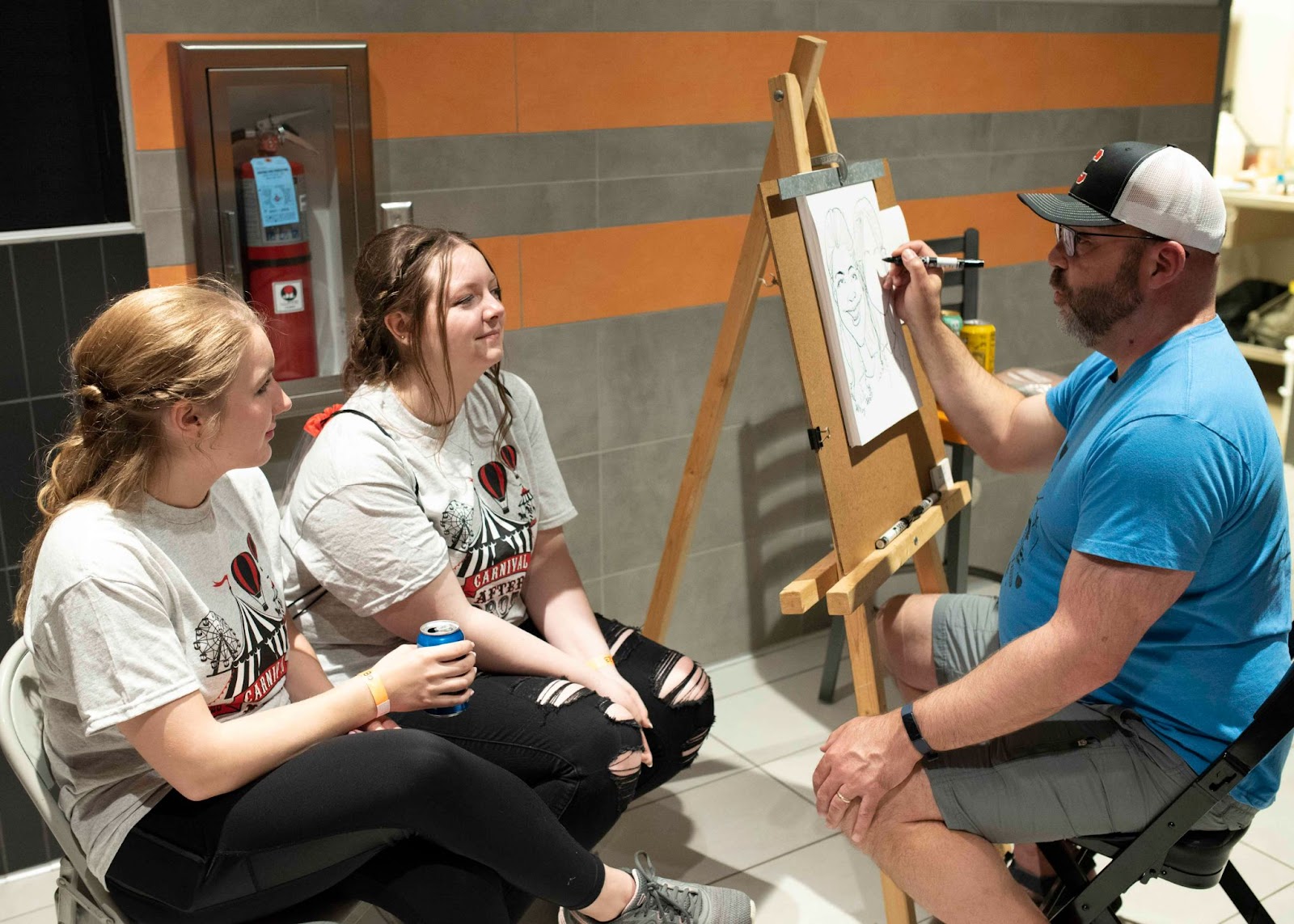 Micah Peterson and classmate Emily Holden get a caricature of themselves drawn by Scott Lassiter. 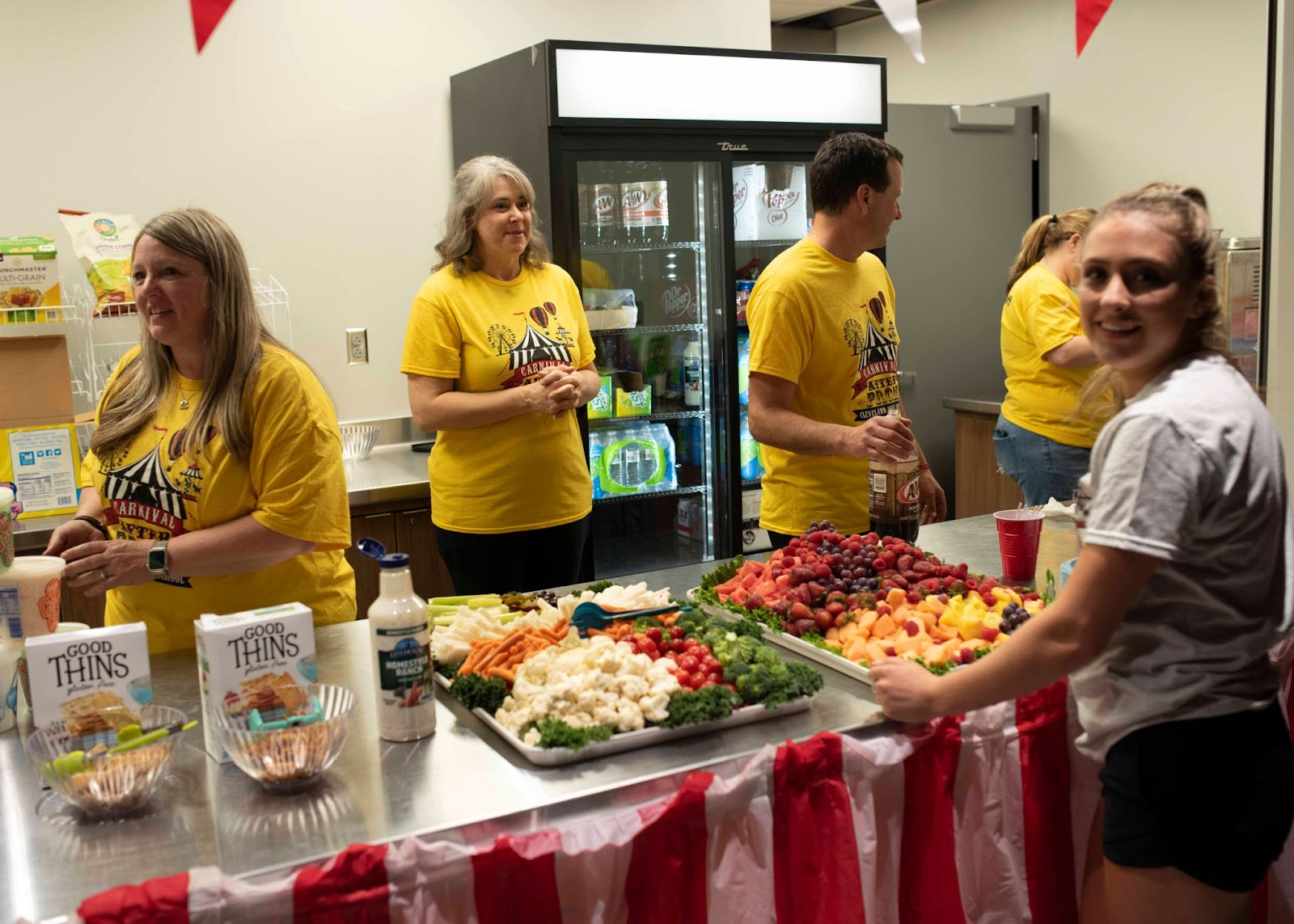 Healthy snacks were available in the cafeteria. 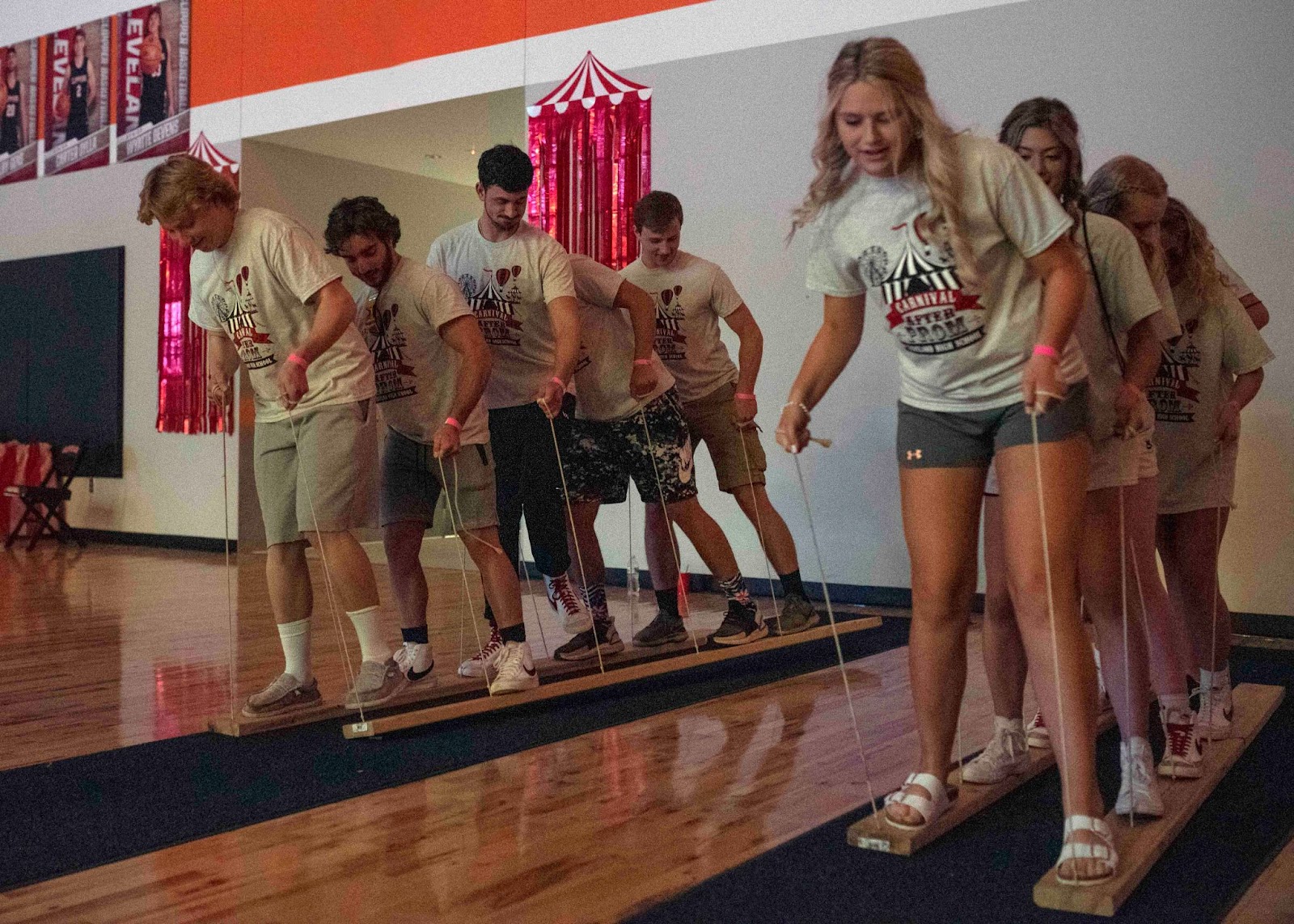 This race required a lot of coordination. 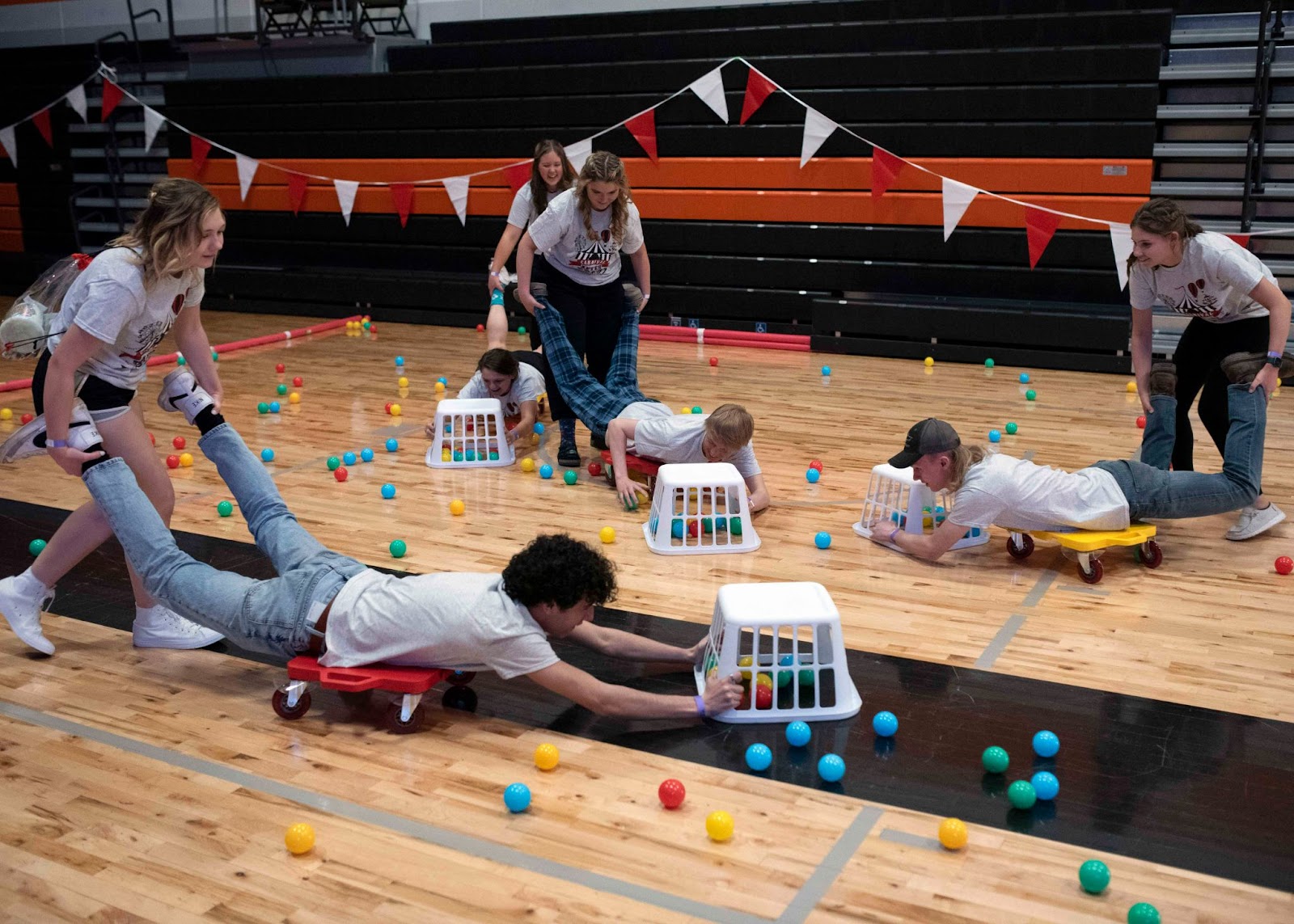 The alligator game has been a staple of Cleveland after prom. 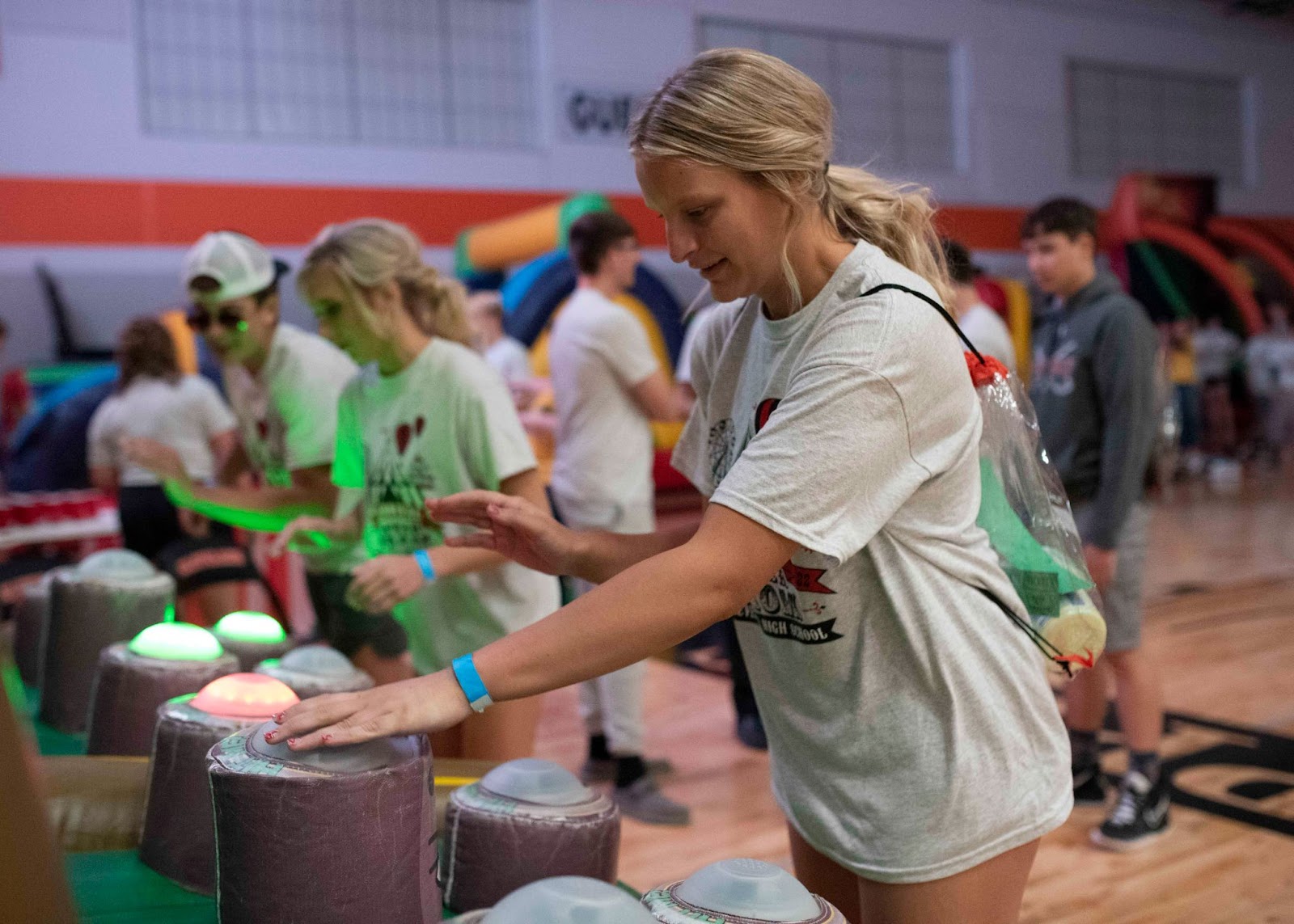 Grayce Kortuem hits a post in a game of whack-a-mole.