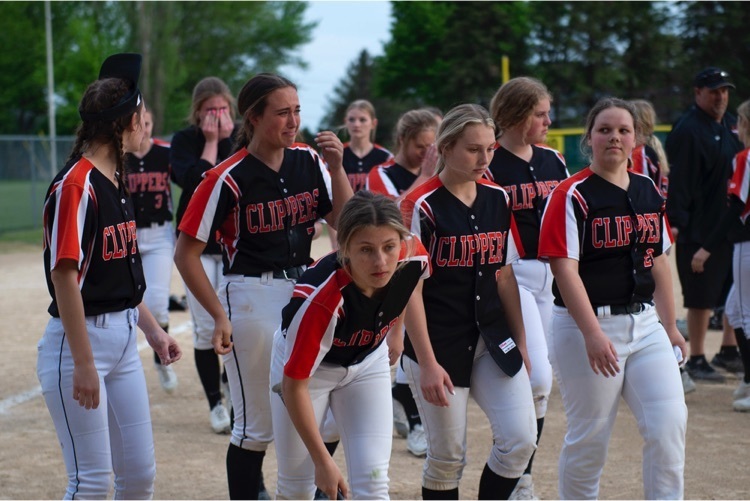 Two seasons of 20 games each, six innings per game...on average.

Not counting summer ball and minus a few frames here and there, pitcher Emily Kern and her catcher Harley Connor have warmed up together before each inning well over two hundred times…just at a varsity level.

But prepping for the fifth inning on Monday at home against Madelia in the first round of the section playoff, the duo got off track. Kern took the “coming down” throw in the back of the head, knocking her out of the game.

While the fifth-seeded Clippers were comfortably in front of their 12th-ranked rivals 10-3 at the time, with their ace in the dugout, they couldn’t hang on. Avenging a pair of earlier season losses, the Blackhawks went on to end the Clippers’ season with a 12-11 triumph.

“An accident like that is nothing you work on in practice,” said first-year head coach Mike Barten. “So you just hope your backup pitchers are ready. And they threw strikes. That’s what I asked: throw strikes, and if they get hit, hopefully we can make plays, but we had a couple of situations where we didn’t make plays.”

The Clippers had a good chance to come into Caswell Park on Saturday with no losses and to make a run in the sections, especially since Madelia went on to lose to Springfield in a close 2-0 battle, and the Clippers were peaking, especially with their bats.

Leaving saltwater tracks, the defeat was an especially bitter one.

“It’s hard to take right now, but I told the girls tomorrow morning the sun is going to rise,” Barten said. “Life is hard sometimes. I’m just glad Emily is OK. We lost the game, and we’ll move on.”

Madelia’s young relief pitcher threw hard, and the Clippers didn’t get the clutch hit in the final two innings, which contributed to the loss as well.

In the bottom of the seventh, they were just one hit away from the tie. Kaylee Karels hit a grounder back to the pitcher. She couldn’t handle it, and Karels reached first on the error. With two outs and Karels moved to second on a passed ball, Emma Sweere dropped a hit into center field for an RBI double, and the Clippers were within a run.

Up next, Ashley Connor took a 3-1 toss  back hard to the pitcher, but her glove was in the right spot for a lineout that ended the game.

“I don’t think her speed and location were anything different than we saw on Friday when we banged out 15 runs over Martin County West,” Barten said, “so, it’s disappointing we went a little flat there at the end.”

Continuing where they left off when they easily downed Martin County West, the Clippers made a statement early.

After Kern only allowed a walk in the top of the first, they opened their offense with four quick runs. Harley Connor snuck a grounder through. Running for her, Kiera Schipper stole second and scored when Kern dropped a hit into left field.

Cassandra Conner got hit by a pitch, and Laci Hollerich lined a double into left field to score Ava Hahn, who was on the base routes for Kern. Following up, Emma Sweere plunked a hit into left field for two RBIs.

After Kern retired the next three Madelia batters, one-two-three, the Clippers added another run in the second. Sophie Shouler got hit by a pitch, stole second and scored when Kern’s check swing went back to the player at first, but she didn’t take it to the base, and Shouler scored.

The Clippers went up 10-0 in the third. Hollerich smacked a line drove to right field. Up next, Sweere looped a fly ball to right that went off the fielder’s glove. Hollerich scored on the error. Grayce Kortuem cracked a double to the centerfield fence to bring Sweere home.

Facing a new pitcher, Shouler reached first on a bunt while Kortuem scored on the play. With two outs, Cassandra Connor sent a pitch to the left field fence for two RBIs.

Madelia posted a trio of runs in the second on a walk, a single, an error and another single.

With Kern out, Alanna Hartman, in her second inning on the mound for the varsity, retired the three batters she faced in the fifth, but on a walk, a hit, a hit batter and a three-RBI double, the Blackhawks narrowed their deficit to four runs after the top of the sixth.

The Clippers missed a good chance to get some breathing room in the sixth. With two outs, Kortuem singled as did Shouler and Harley Connor to load the bases, but the Clippers went down looking, and all three were marooned.

Hartman gave up three base hits and a run to start the seventh. Barten made an appeal to get Kern back in the circle, but the ump couldn’t let her.

“Emily felt fine,” Barten said. “There were no lingering effects, but she needed a doctor’s note, and I understand that. We just wanted to check what that protocol was.”

With no outs, Hailey Plonsky took over, but Madelia’s bats were red hot, and they came up with four more hits for five runs and a 12-10 lead.

“Alanna and Hailey came in and did an outstanding job at a spur-of-the-moment, pressure situation, but we just didn’t finish," Barten said.

Top teams in the section, like Nicollet, Sleepy Eye St. Mary’s and New Ulm Cathedral have two or three pitchers always ready to go who can throw accurate and hard, added Barten, and the Clippers need to work toward that.

“We’ll get Hailey and Alanna working hard in the summer. They are going to be counted on heavily next year.”

Kern struck out three and allowed two walks and four hits in her four innings in the circle. Hartman struck out one and gave up five hits and one walk and beaned one. Plonsky allowed four hits and no walks in her inning in relief. The Clippers committed a pair of errors.

It was the end of a high school career for Kern, Kortuem and Ashley Connor. The Clippers finish their season with a 10-11 record. 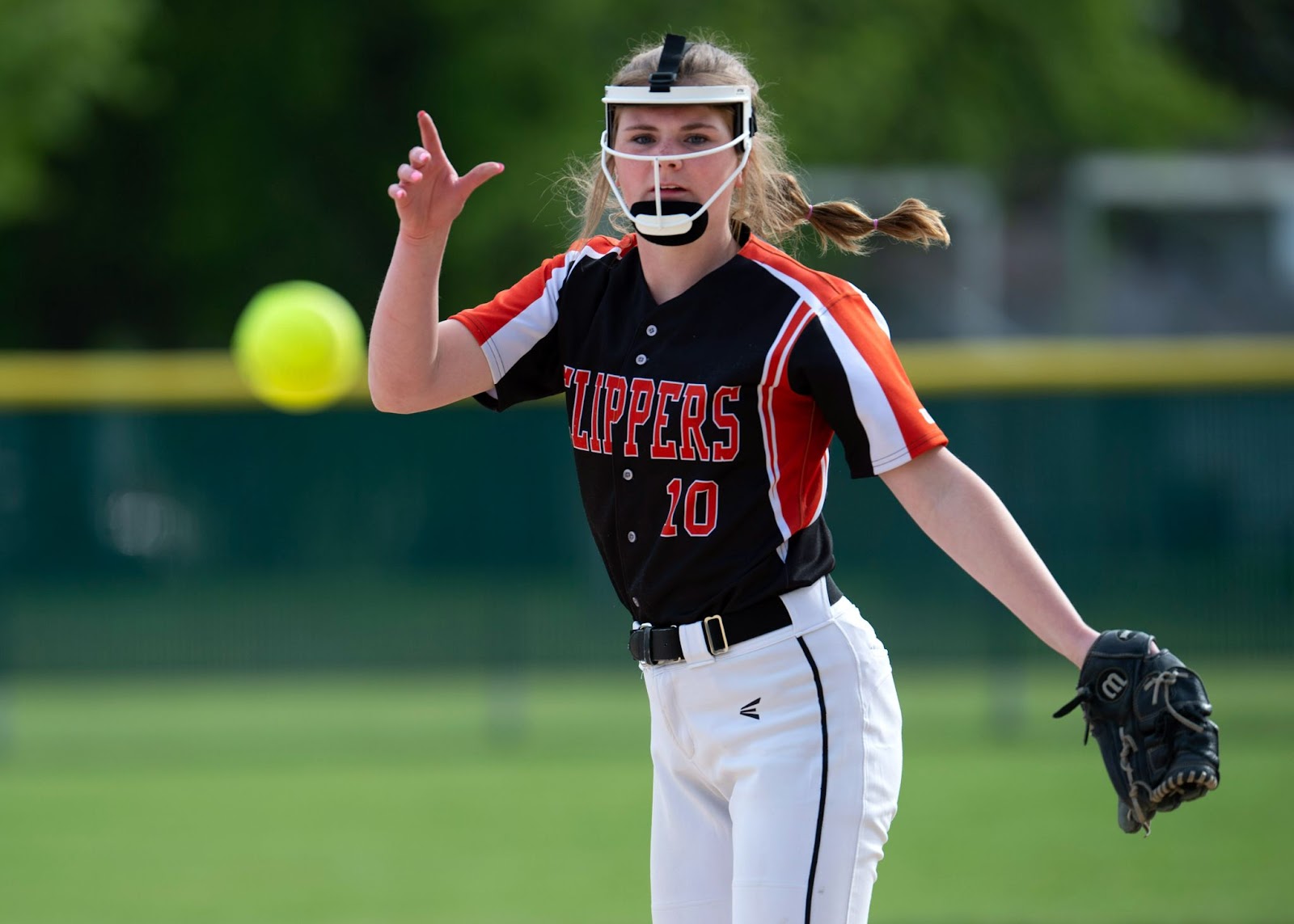 Senior pitcher Emily Kern was well on the way to leading her team to the second round of the section tournament when she got hit in the back of the head during warmups before the fifth inning. The Clippers missed her bat as well as her arm. 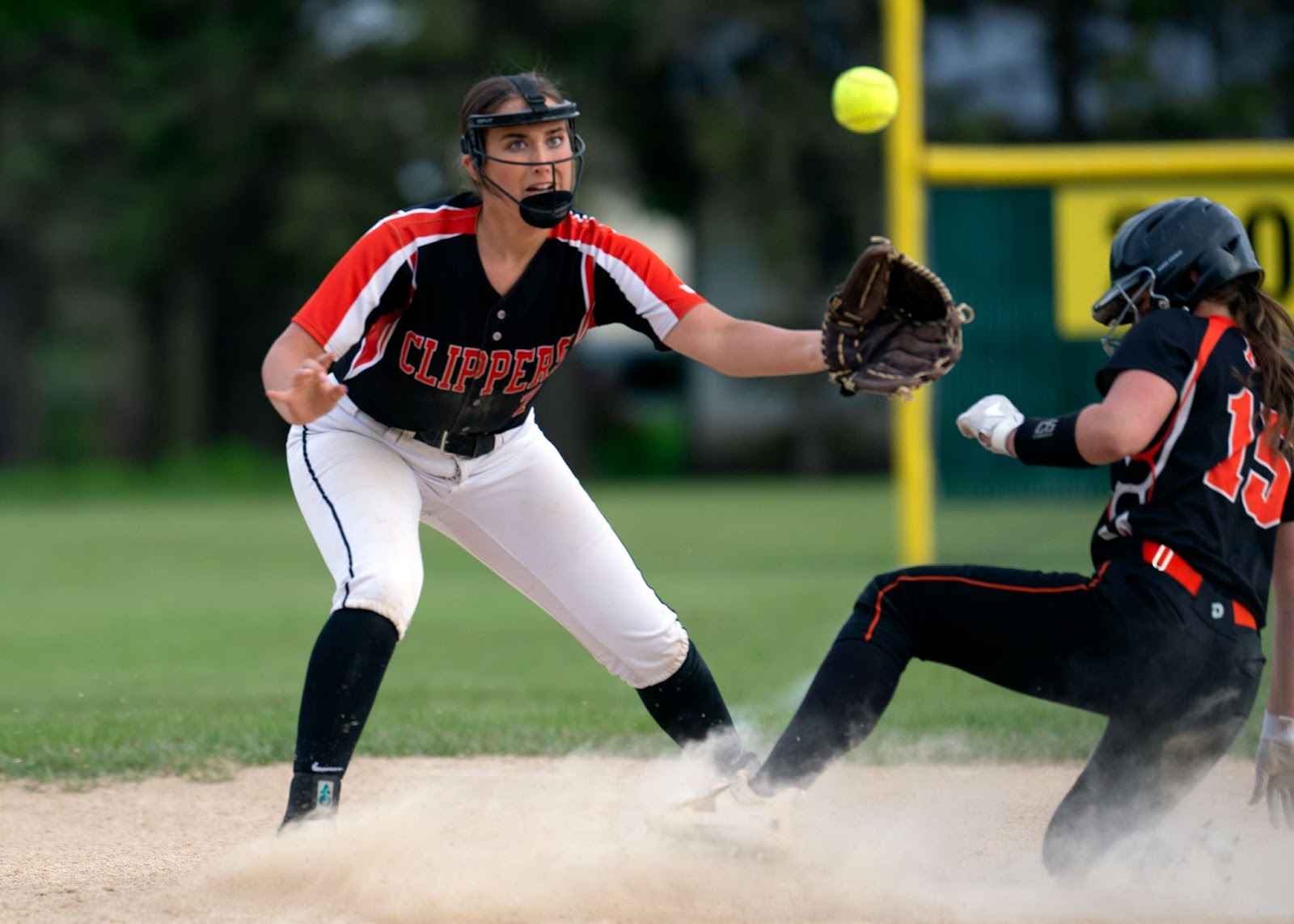 Laci Hollerich positions her glove for a putout catch at third. 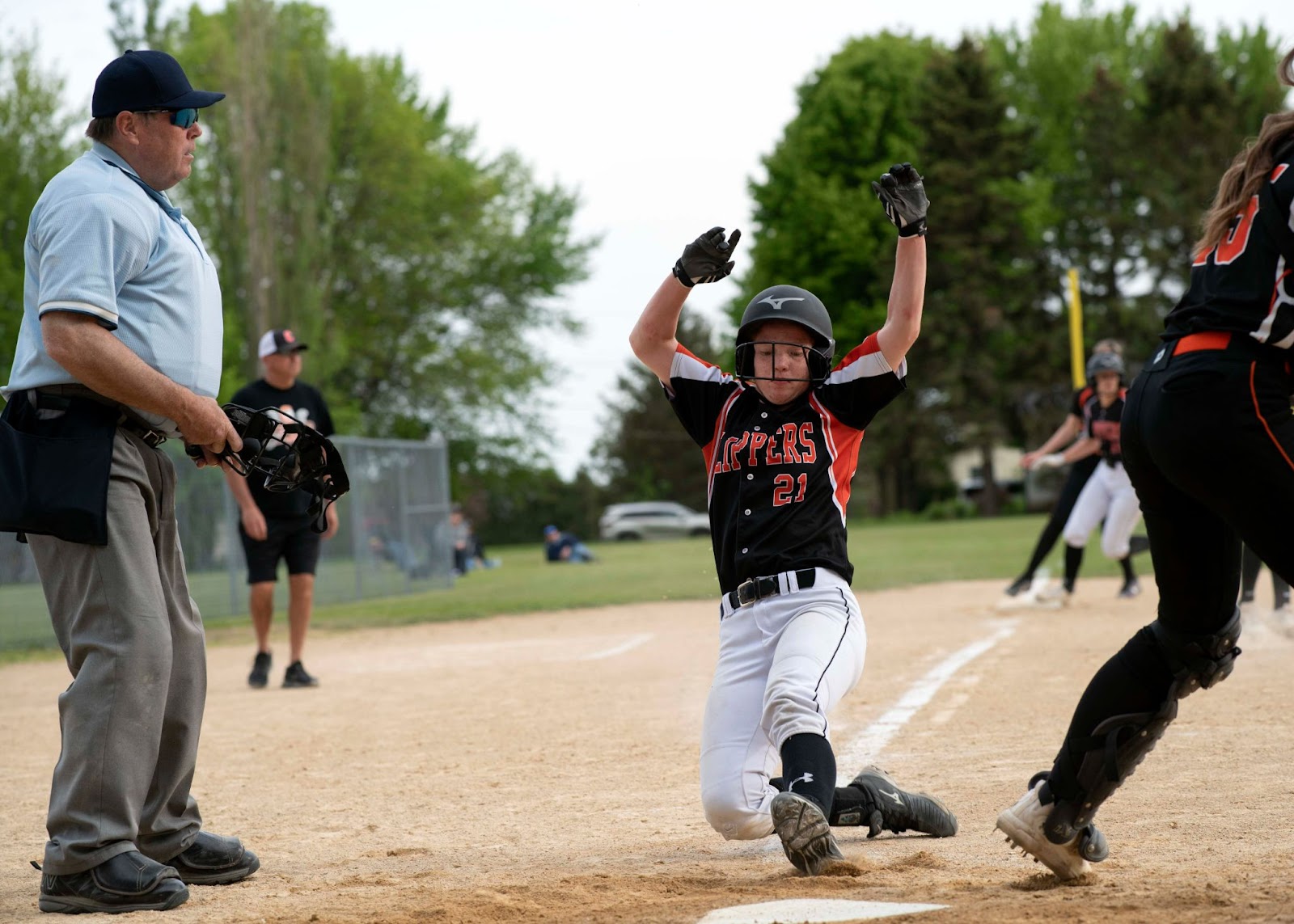 Emma Sweere slides in easily for the Clippers’ sixth run. 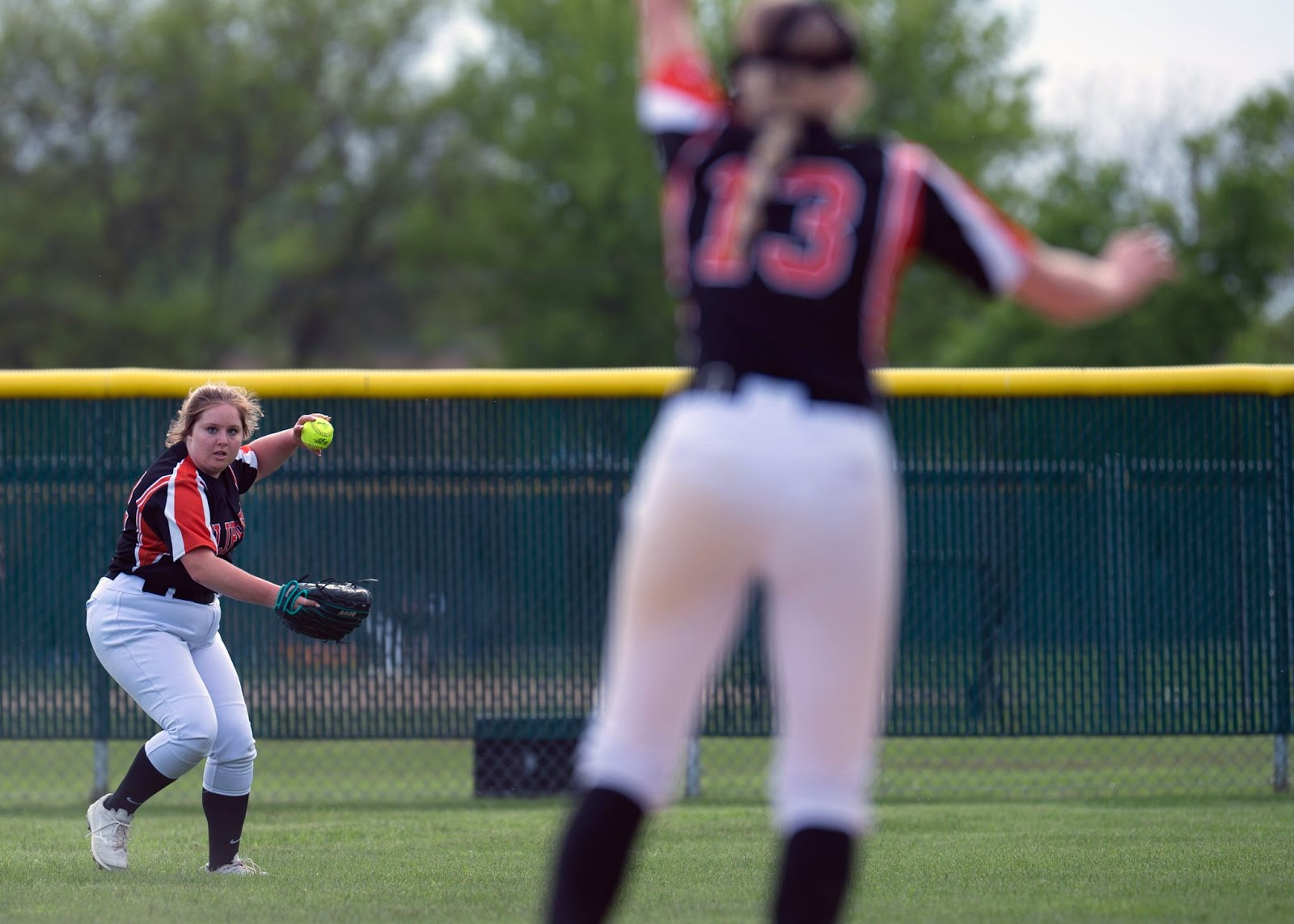 Ashley Connor chucks the ball in from right field. 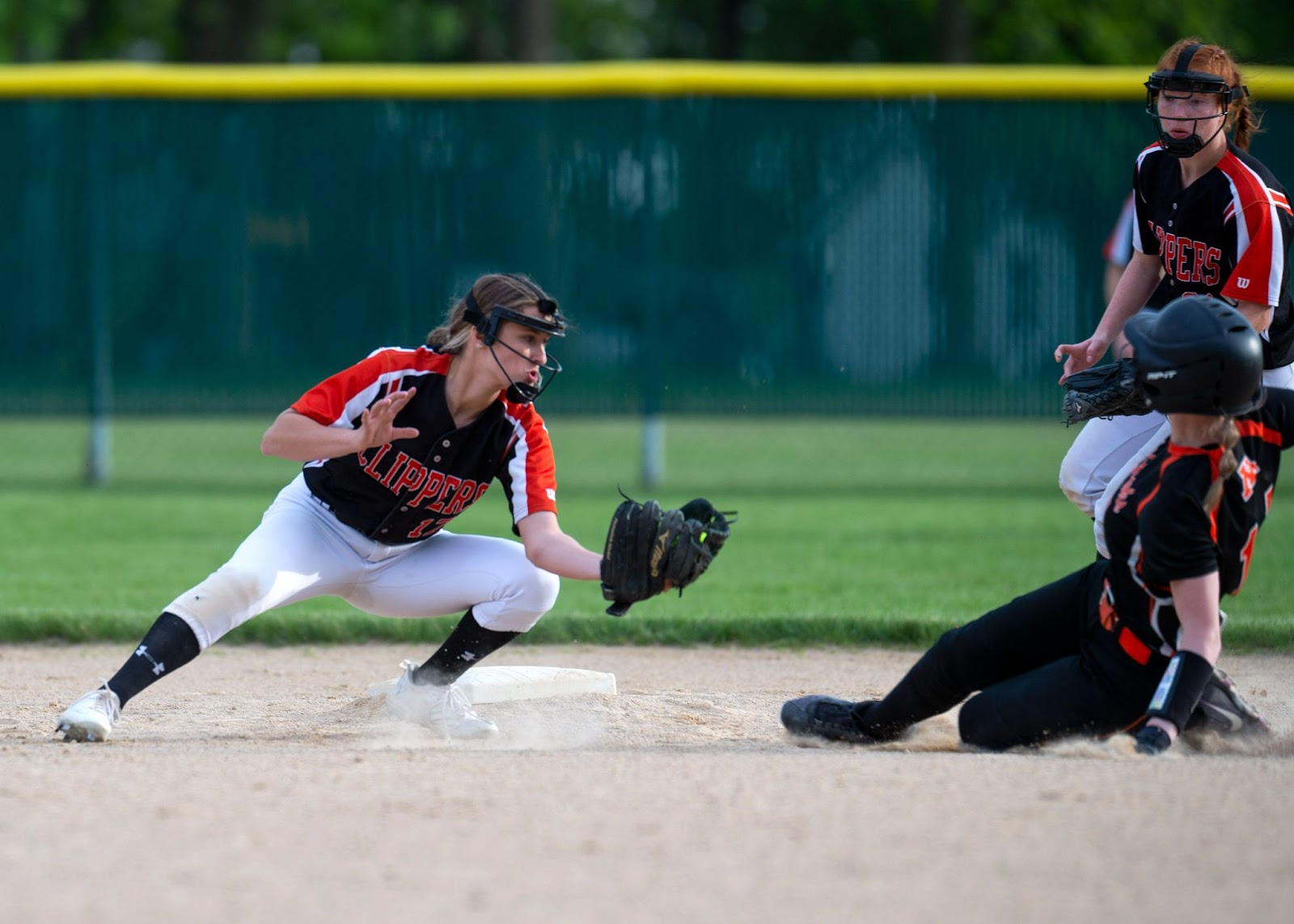 Shortstop Sophie Shouler swings for a putout attempt at second. The runner was safe. 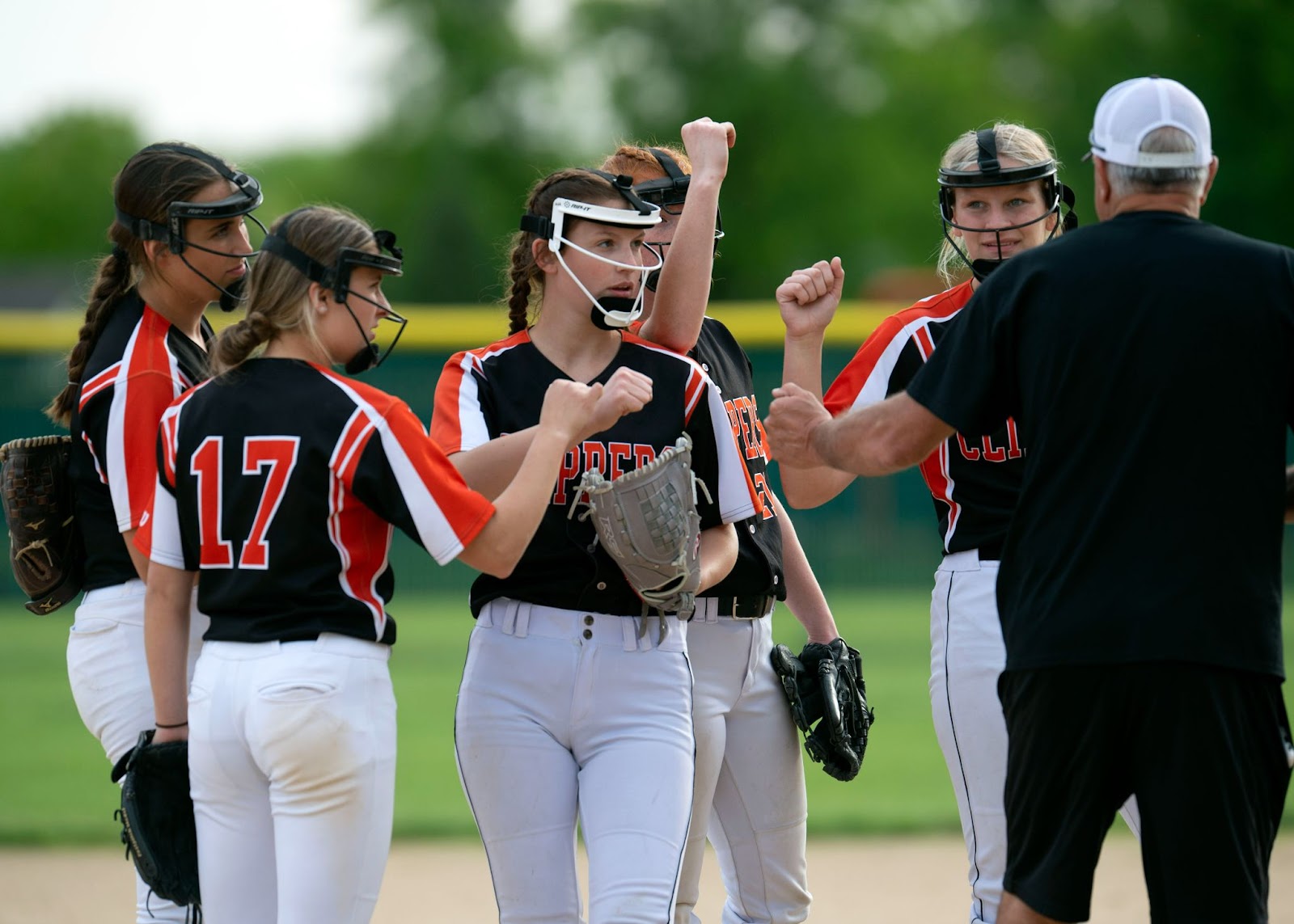 The infield rallied around junior Alanna Hartman in relief. They are, from L-R, Laci Hollerich, Sophie Shouler, Hartman, Emma Sweere and Grayce Kortuem. 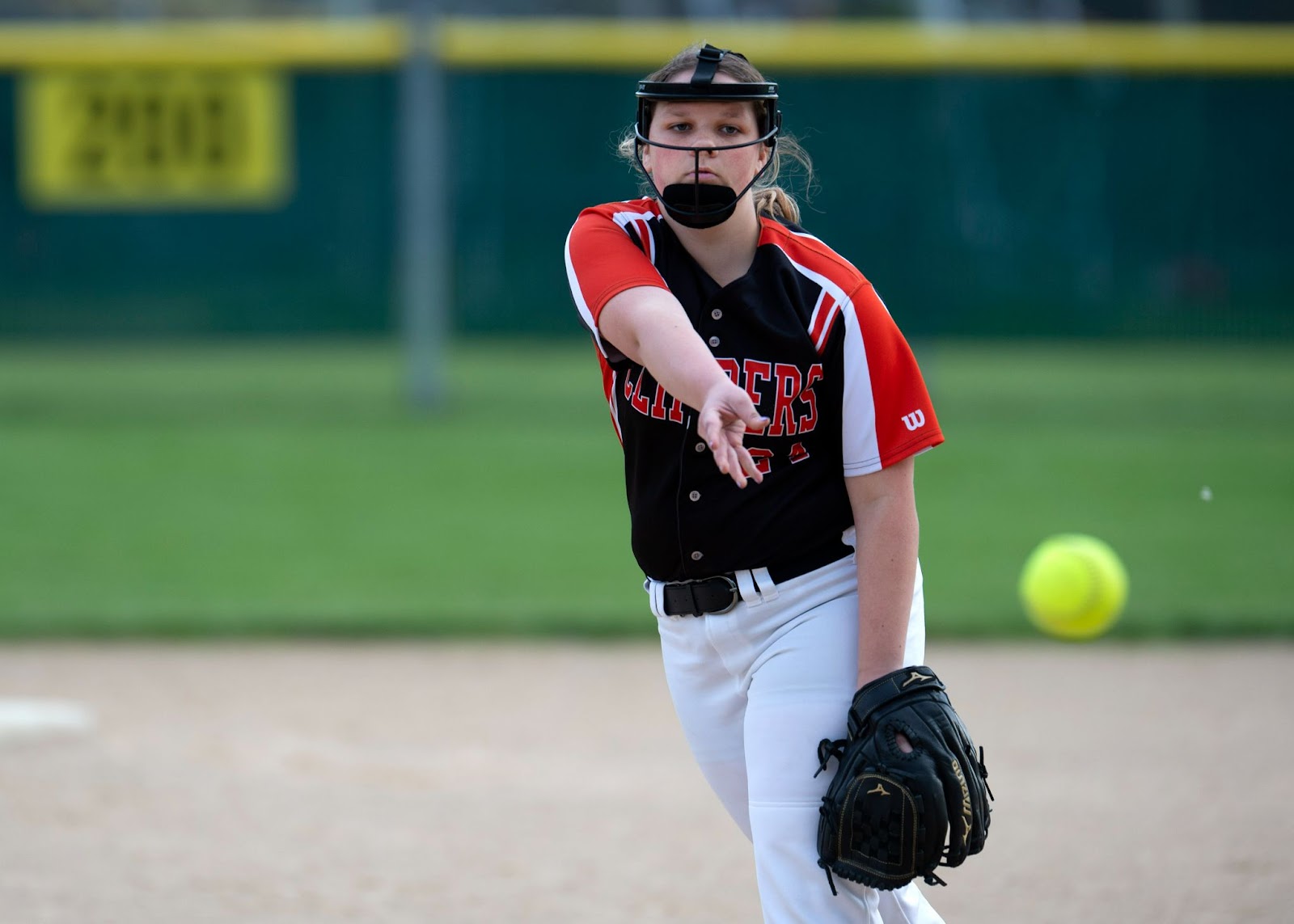 Junior Hailey Plonsky was the second pitcher in relief after Kern had to leave the game.