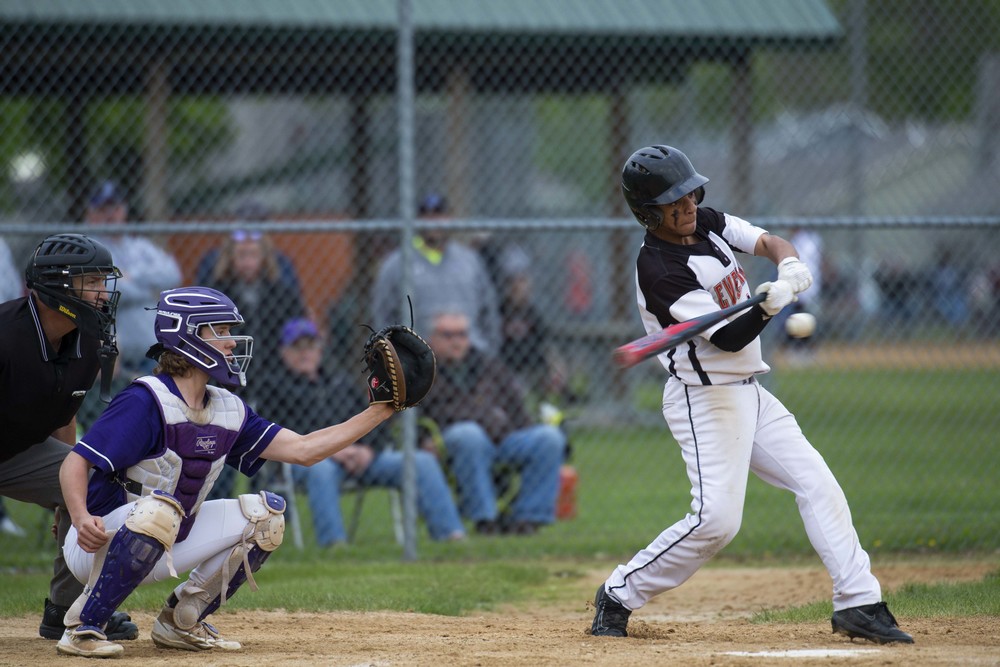 Seizing a victory in dramatic fashion, the Cleveland nine advanced to the second round of the section playoffs thanks to a Kaleb Timlin walk-off single (above) that edged visiting Granada-Huntley-East Chain/Martin Luther 5-4 in 10 innings on Thursday.

Jackson Meyer led off the inning with a hard grounder up the middle for a base hit. At the plate next, heavy hitter Tanyon Hoheisel smacked a line drive, and Lucas Walechka walked to load the bases, putting the Clippers in great position with zero outs.

But Timlin, a senior, still felt the heat, especially since he was still looking for his first hit of the night.

“I was in a bit of a slump, and it was a lot of pressure knowing the outs, the count and that if I struck out it could cost us the game because I don’t know what the guys behind me are going to do. I have confidence in my team, but you still never know.”

But on an 0-1 count, Timlin took an outside fast ball up the middle to score Meyer for the winning run.

“I stepped with it and sent it. It was amazing. It was so fun to see my teammates’ reaction to it.”

The Clippers went up 1-0 after one when lead-off batter Carter Dylla got hit by a pitch, stole second, moved to third on a Colin Krenik ground out and scored on a Meyer base hit up the middle.

It was all ML/GHEC/T after that until the sixth when the Clippers scored three runs for the tie.

Starting the fourth with a runner on first after a third-strike passed ball, the Jaguars scored three runs. The next batter dropped a hit into center field, and the first runner scored on an infield error. Two more runs crossed the plate on an infield single and a throwing error to put the visitors up 3-1.

The Jaguars added another run in the fifth after a single, a walk and another single.

But after Dylla fanned three-straight batters in the top of the sixth, including the top of the order, the Clippers were poised for some runs and produced.

A pitch hit Timlin to juice the bases, and Krenik strolled home when Gabe Sullivan took a full count pitch for a walk. Meyer scored on a passed ball for a 4-4 tie.

The Clippers struck out nine times and scattered 11 hits. Meyer was four for five with four singles. Dylla and Hoheisel each had a single and a double. Krenik had two singles. Timlin had one single.

Dylla started out on the hill and went eight innings. He allowed six hits and two walks but whiffed 13. Walechka tossed the final two innings. He didn't allow a hit, walked two and struck out four.

Like Timlin, Walechka was in a pressure position , especially since he is not accustomed  to a relief role.

“I came in there with the idea that I was going to finish the game, throwing hard, giving it my all every single pitch,” said Walechka. “My curve ball was not dropping as much as I wanted to because I was trying to throw it too hard, but my fastball they couldn’t touch.”

The Clippers committed four errors, all in the infield. Two were inconsequential. 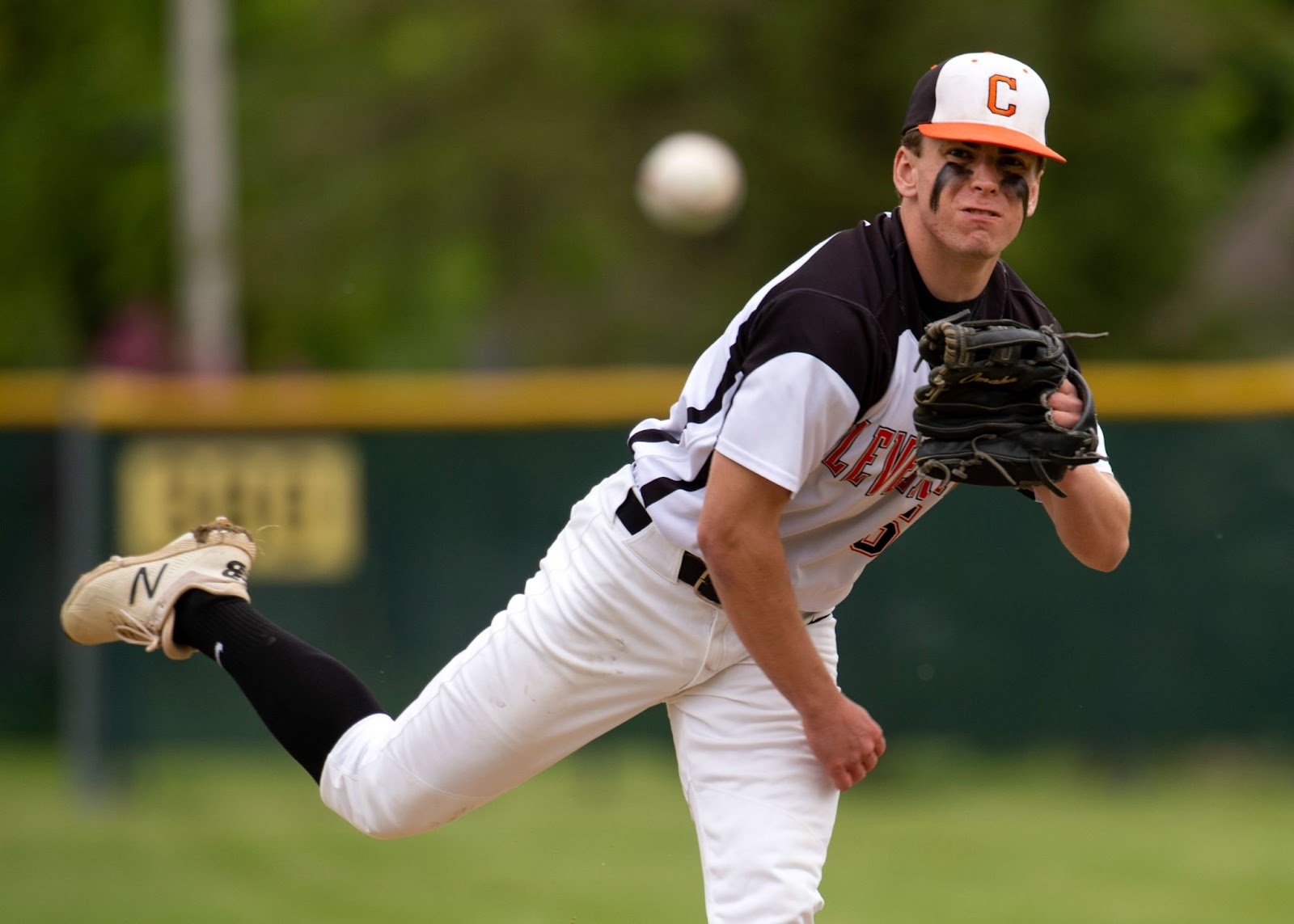 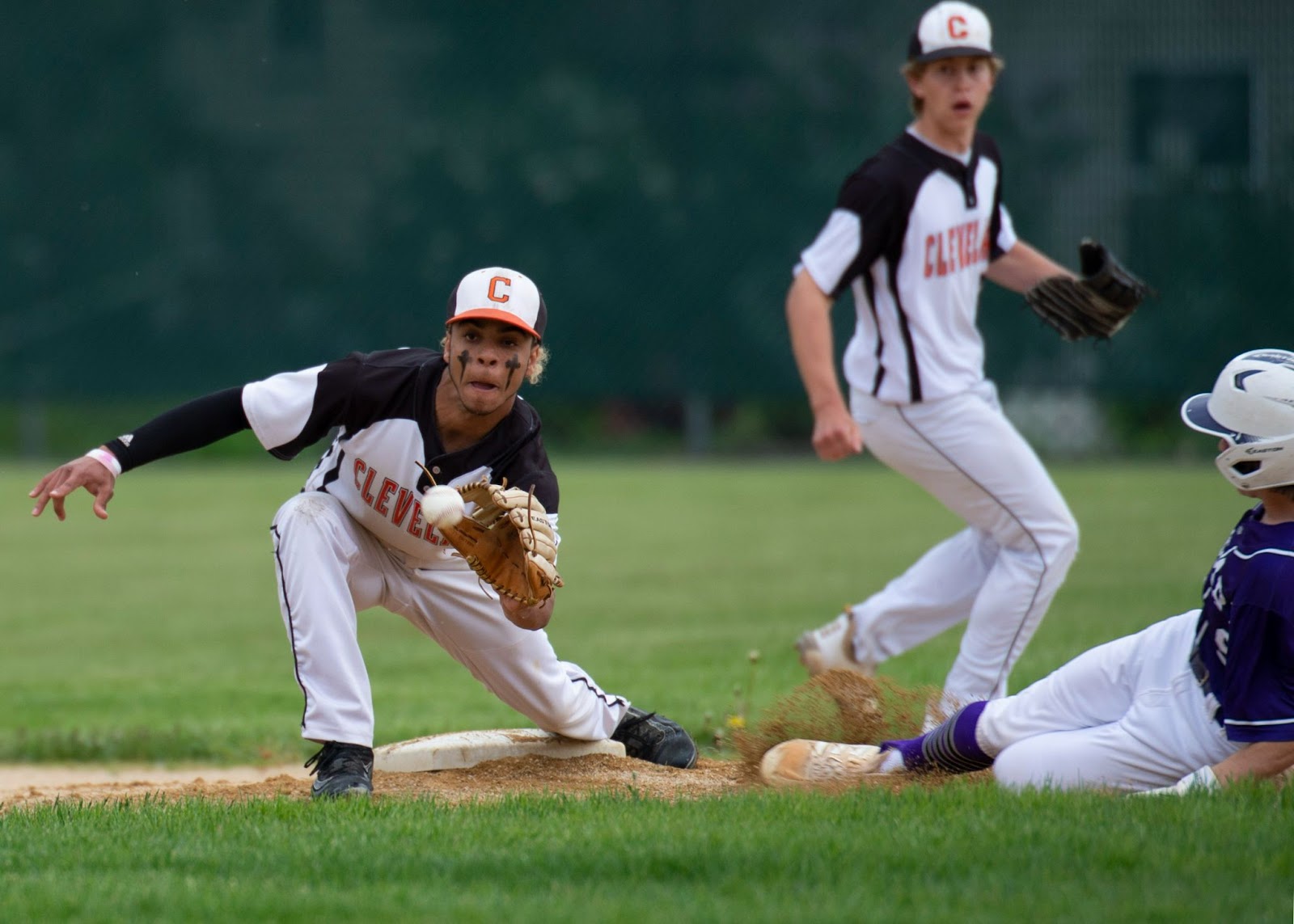 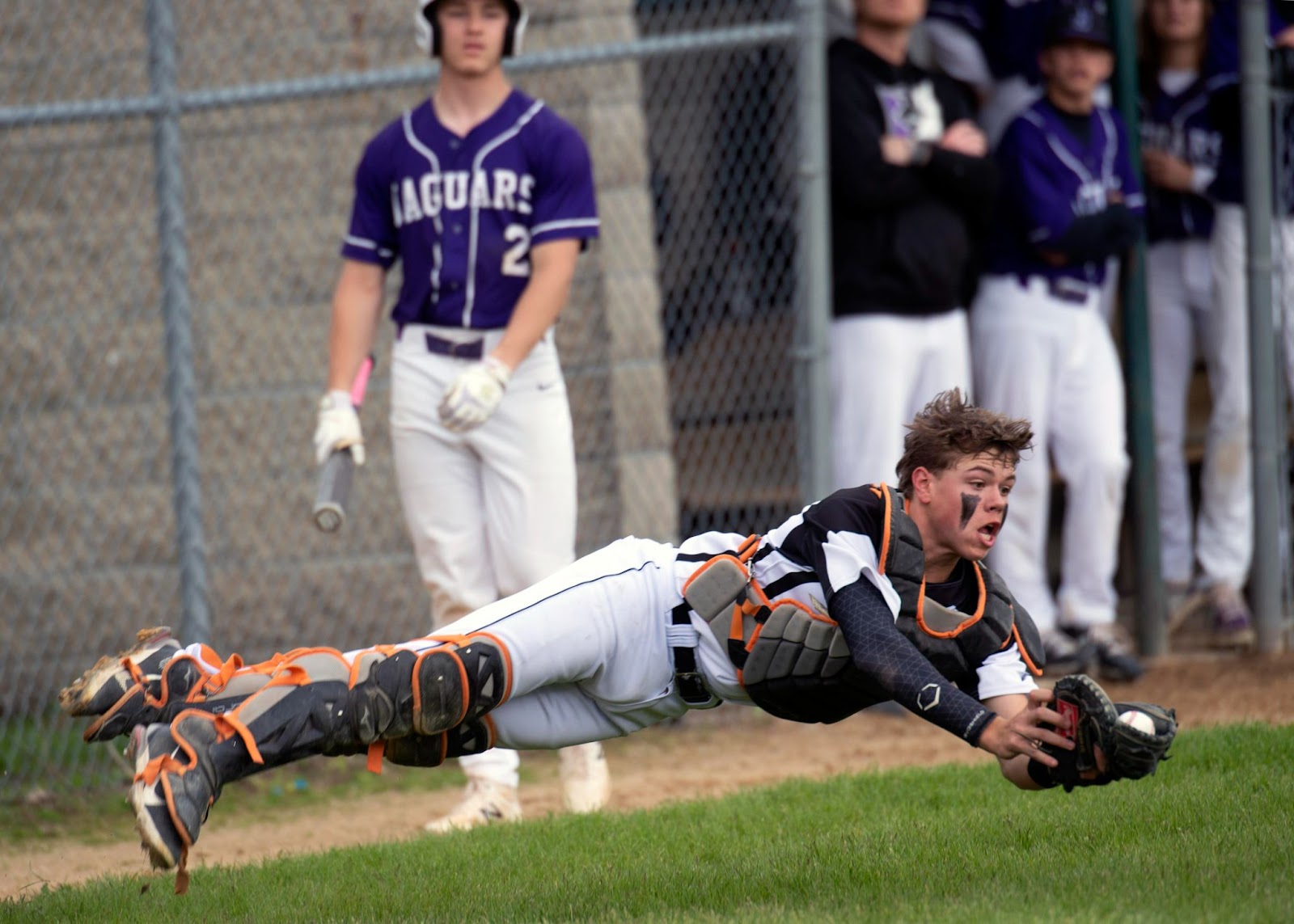 Gabe Sullivan goes horizontal for a catch deep behind the plate. 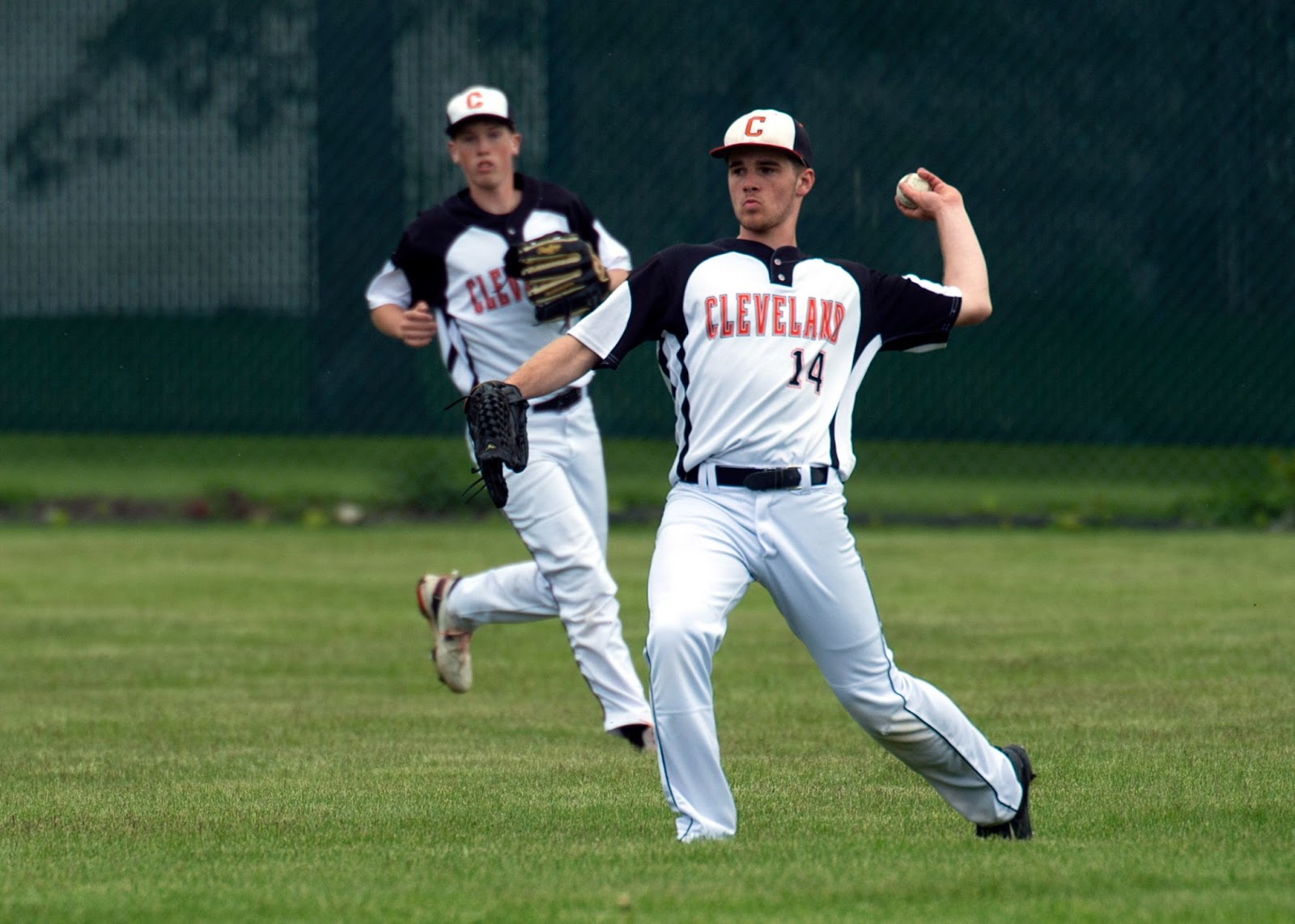 Colin Krenik winds up for a throw from right field. 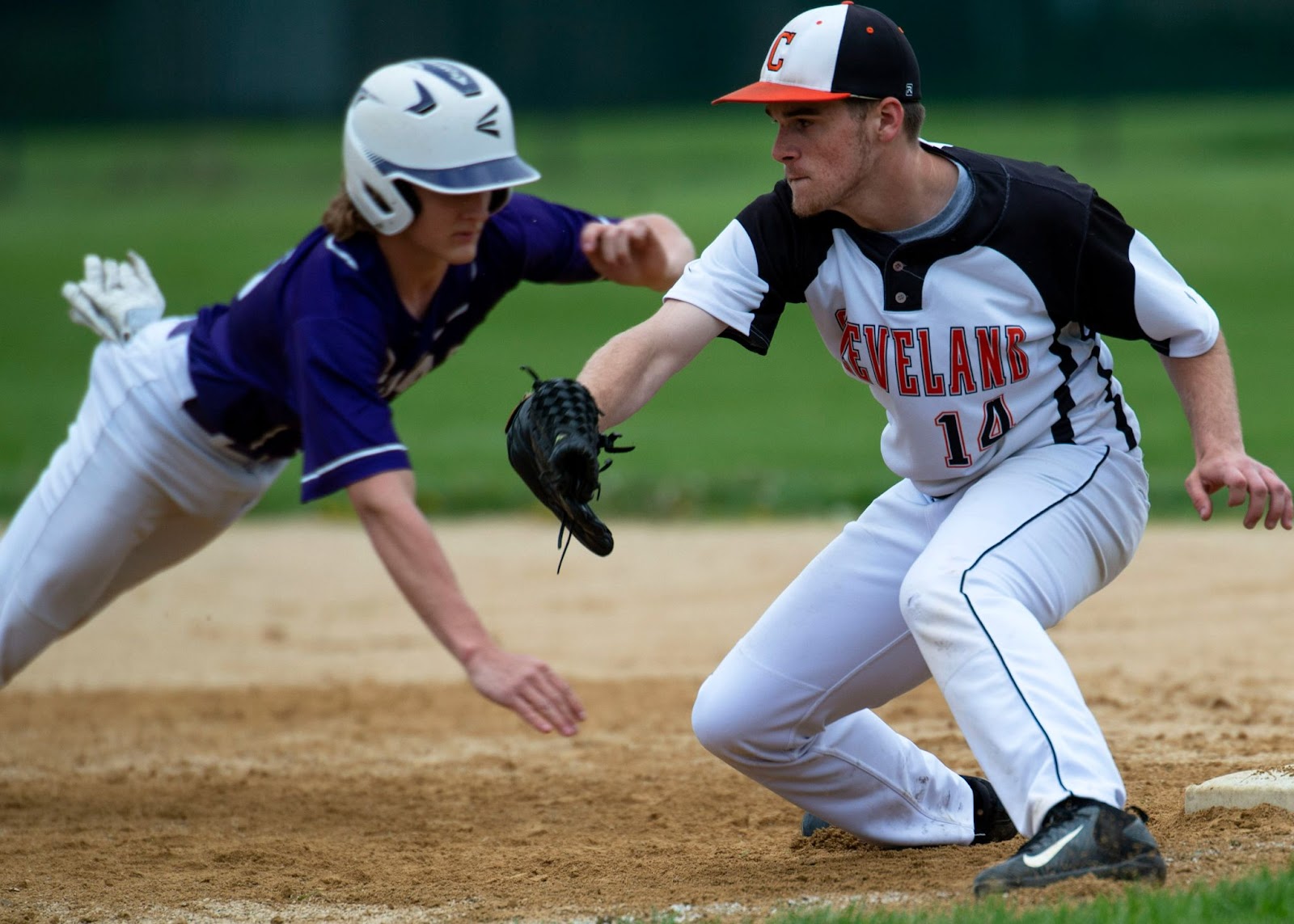 Colin Krenik swings for a tag at first. 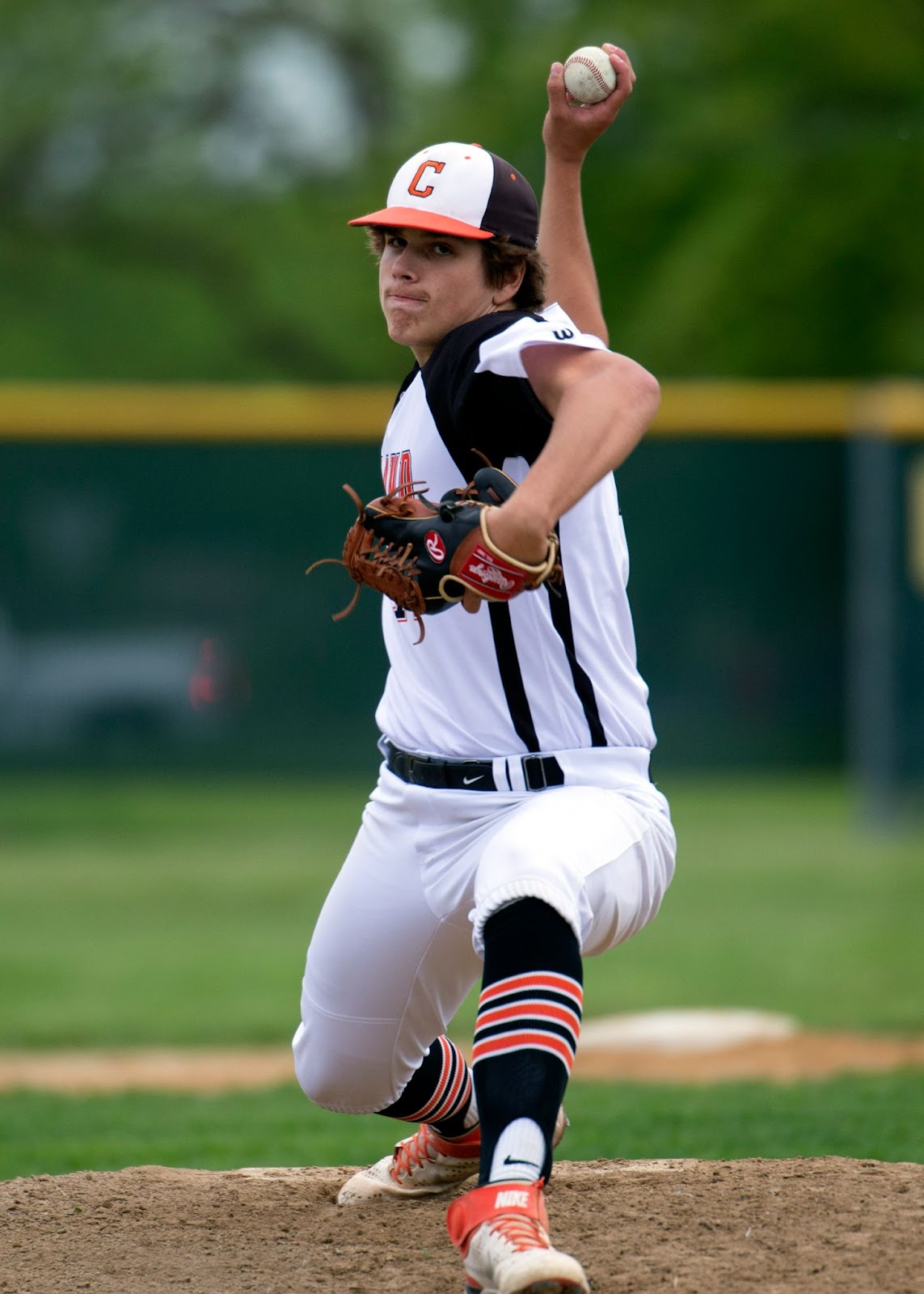 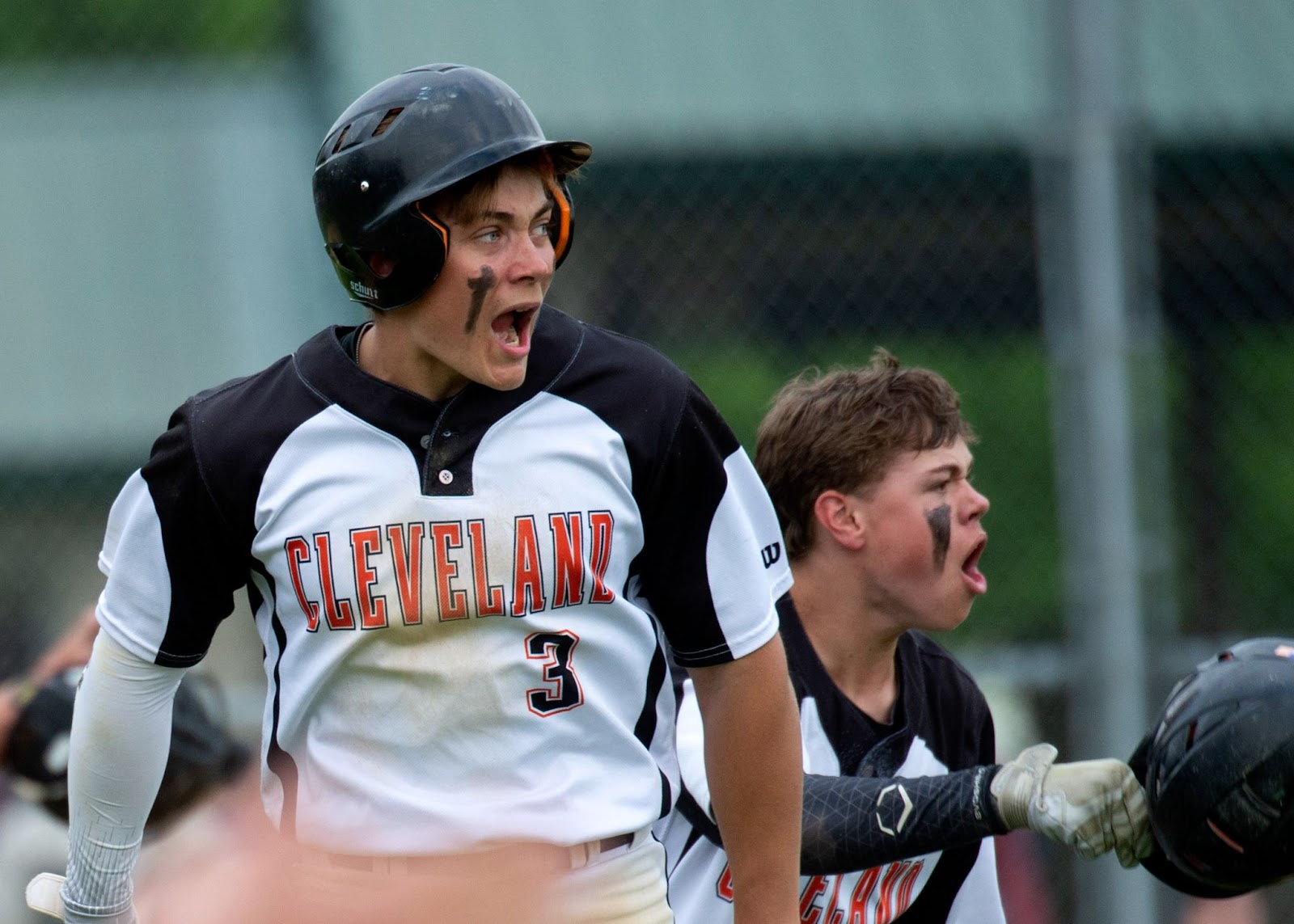 Jackson Meyer and Gabe Sullivan celebrate after Meyer scored the winning run. A senior stepping up, Meyer was four for five on the evening. 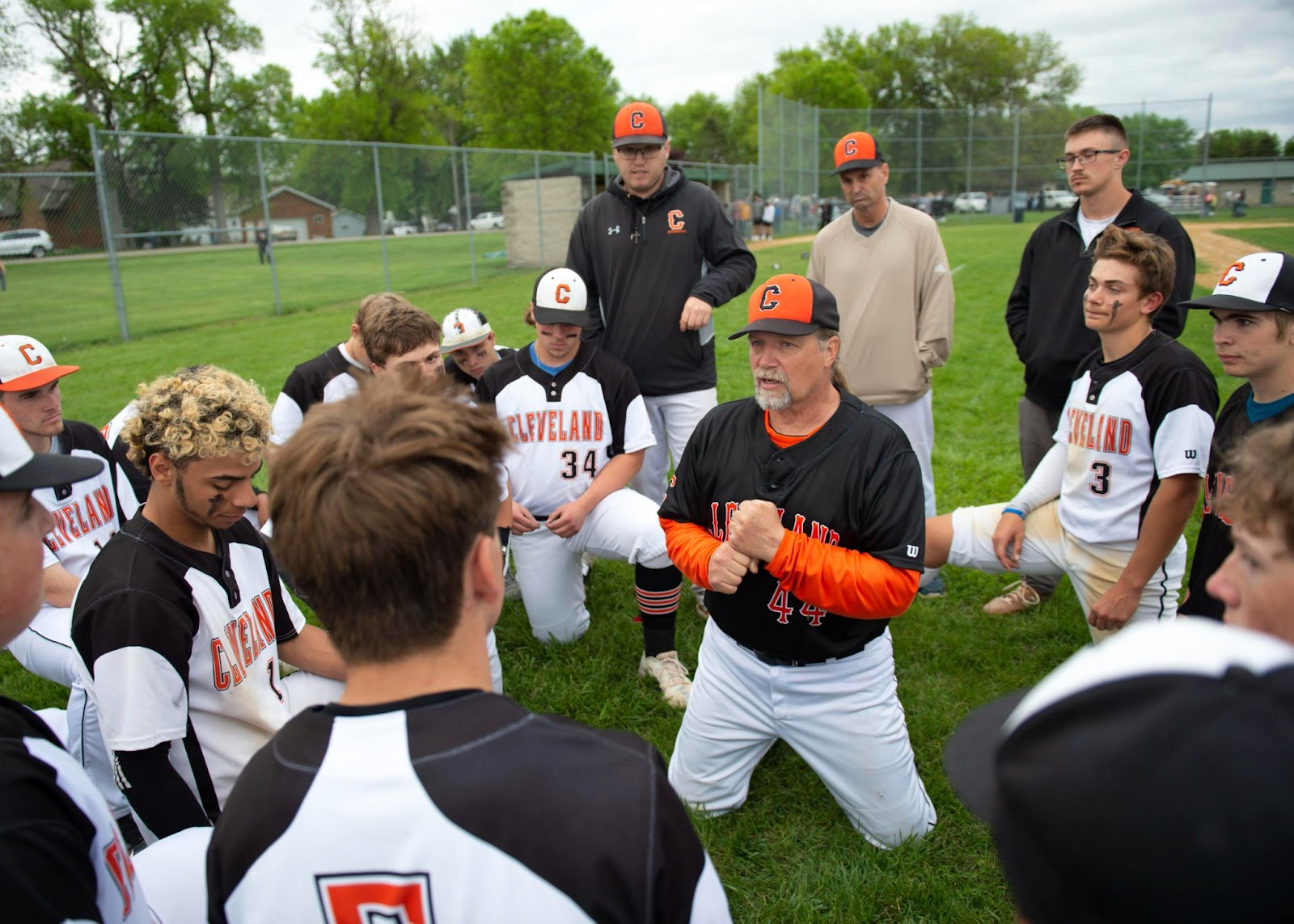 The coaches debrief the team after the win. In front is head coach Mike Krenik. In back are assistant coaches Alec Rogers, Dave Cink and Greg Berry. 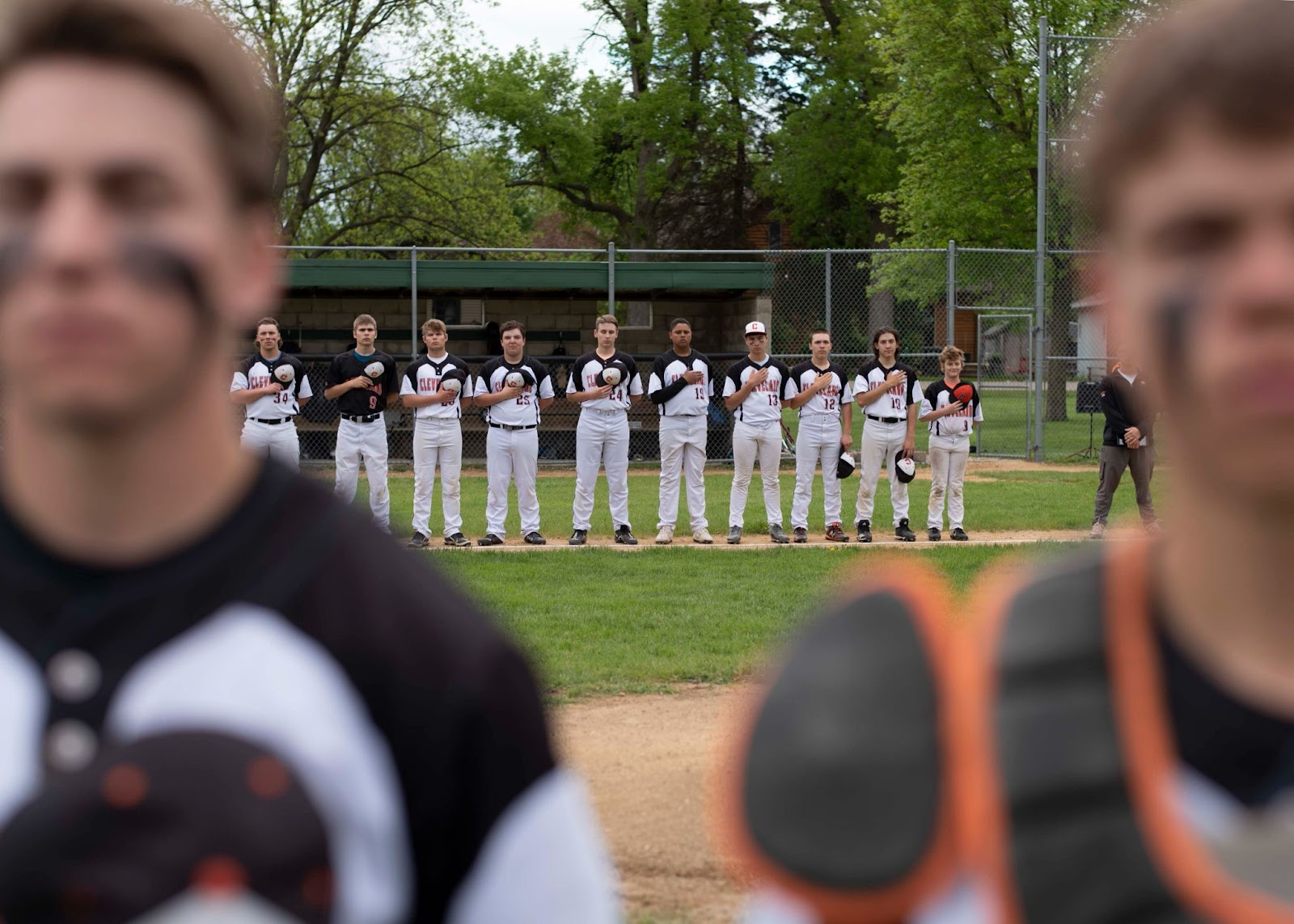 The team pauses for the National Anthem. 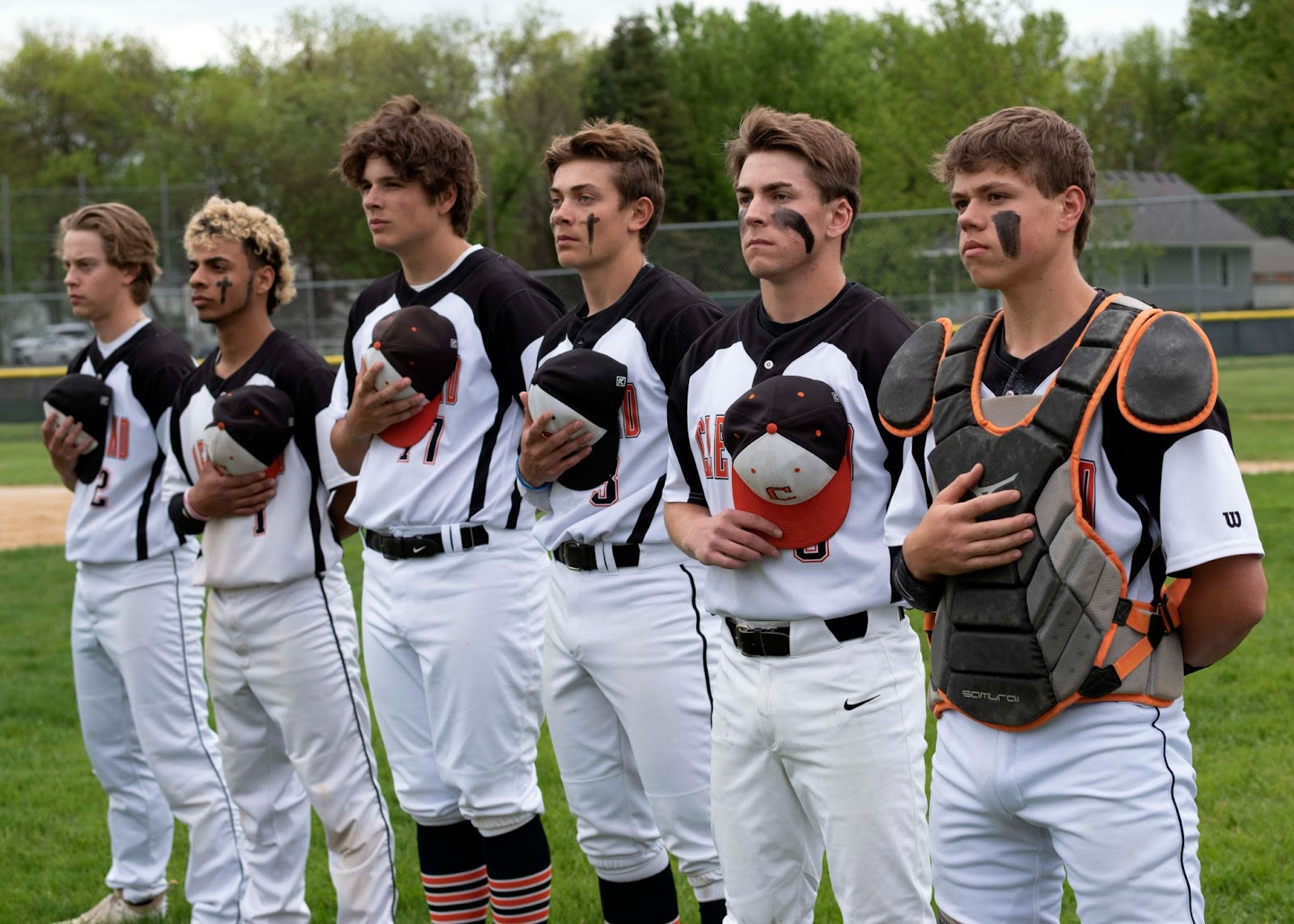