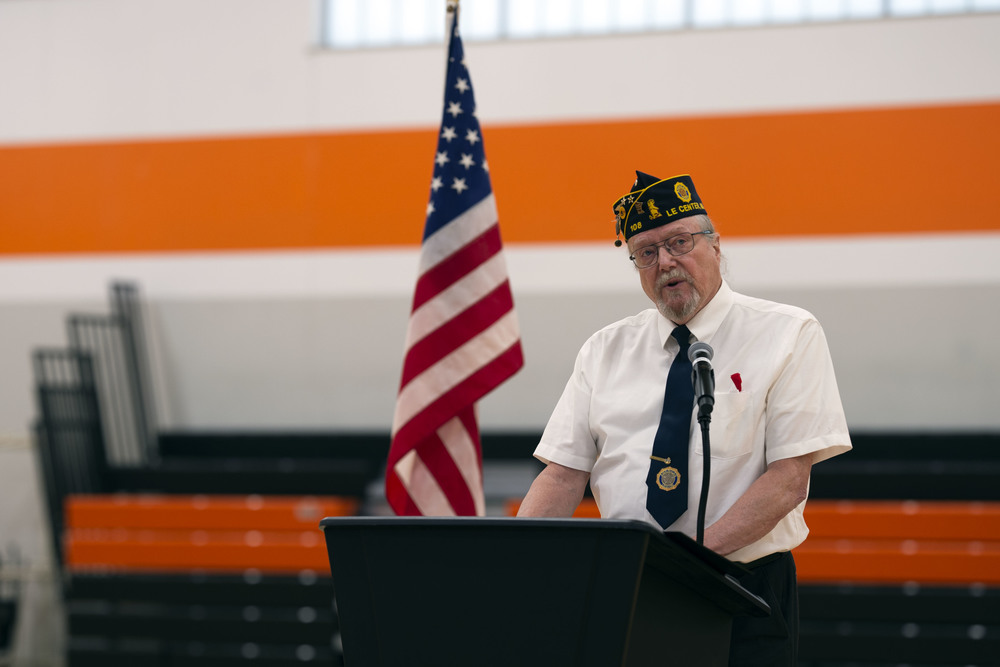 In his Memorial Day keynote address, Charlie Dempewolf (above) described how the United States is a nation at risk.

“For the past couple of years, our country—indeed the whole world—has dealt with the ravages of a deadly virus that originated in China…Our nation is more politically and ideologically divided than perhaps it has ever been. Our southern border is wide open and sparsely defended. For the first time in history, we are faced with an America that may not be the same nation that our comrades died to defend.”

Dempewolf is a retired US Navy Chief Petty officer with over 21 years of active service, including three tours (one in country) of Viet Nam. He is also a retired Nicollet County Veterans Service Officer and member of the Le Center American Legion.

Speaking in the new gym as Monday’s rain drove the annual ceremony inside, he opened his speech with a history of Memorial Day and talked about how the veteran population is aging. He said it’s not enough that we remember the fighting men and women who have given their lives in defense of our way of life. We must remember the purpose behind that sacrifice.

“They can’t be remembered only because they fell. They must be remembered because they fell defending us in places like Gettysburg, the battles of Chosin in Korea and Hue City in Viet Nam, Pearl Harbor and Fallujah, Iraq and the airport in Kabul, Afghanistan. All of these are part of our nation’s history that will ‘live in infamy,’ as President Roosevelt once predicted.”

He said that veterans died defending the ideals of our country as documented in the Constitution and its amendments, and these principles must not be abandoned.

“Our Constitution and amendments define us as a nation and they, in their entirety, need to continue to be upheld. These veterans died defending us and honoring their oath to support and defend our Constitution against all enemies, foreign and domestic…But as a nation, we should not abrogate our responsibility to the fallen by picking and choosing which parts of the constitution we uphold. The second amendment, the right the people to keep and bear arms, is just important as the five precious freedoms guaranteed by the first amendment, some would argue maybe more so.”

Making Memorial Day real, he went on to honor shipmate and friend of his that was killed while patrolling off the waters of Beirut, Lebanon and closed with the reciting the poem “A simple soldier.”

“He was just a common soldier, and his ranks are growing thin, but his presence should remind us that we may need his kind again…If we cannot do him honor when he’s with us to hear the praise, then at least let’s give him homage at the ending of his days.” 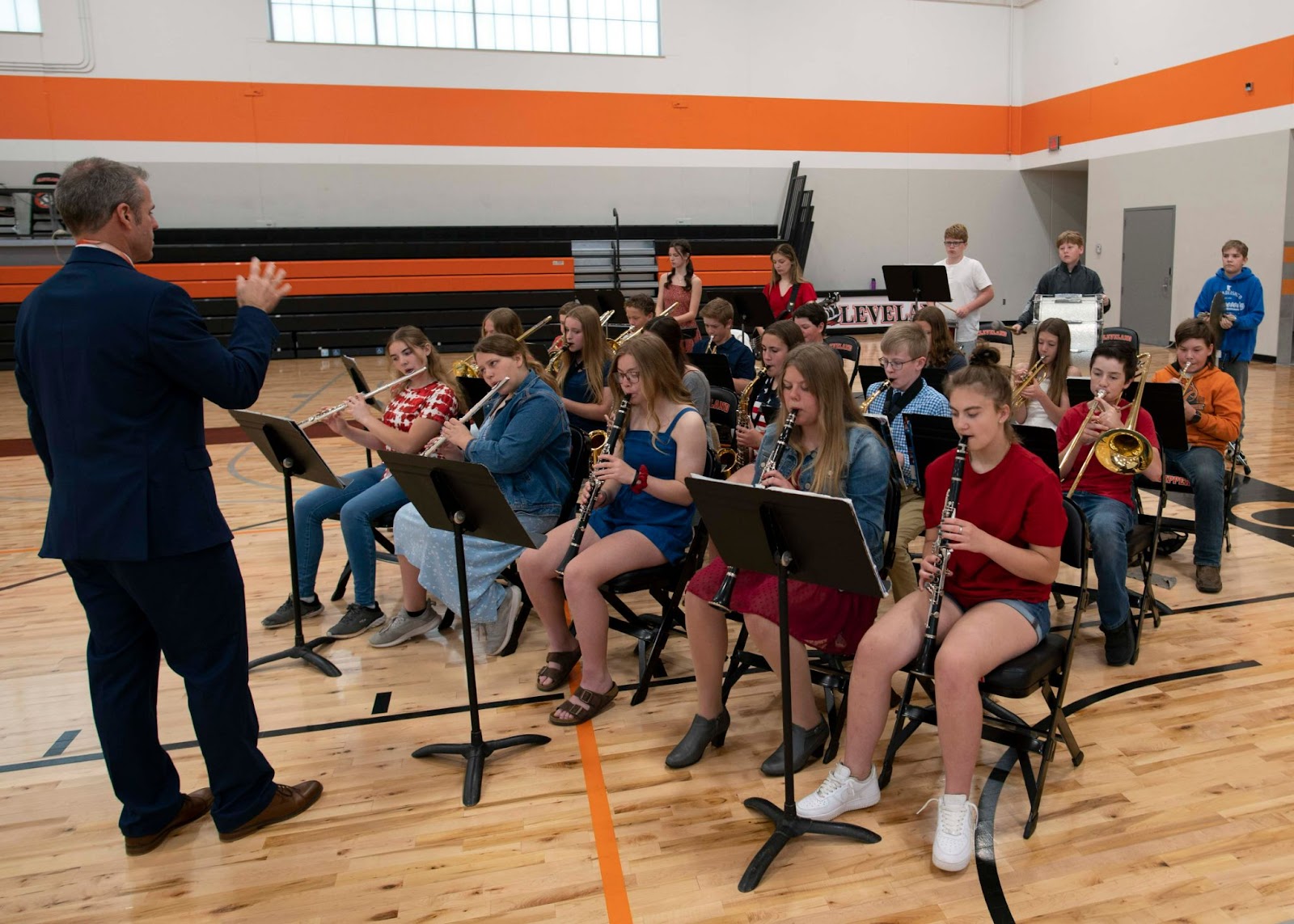 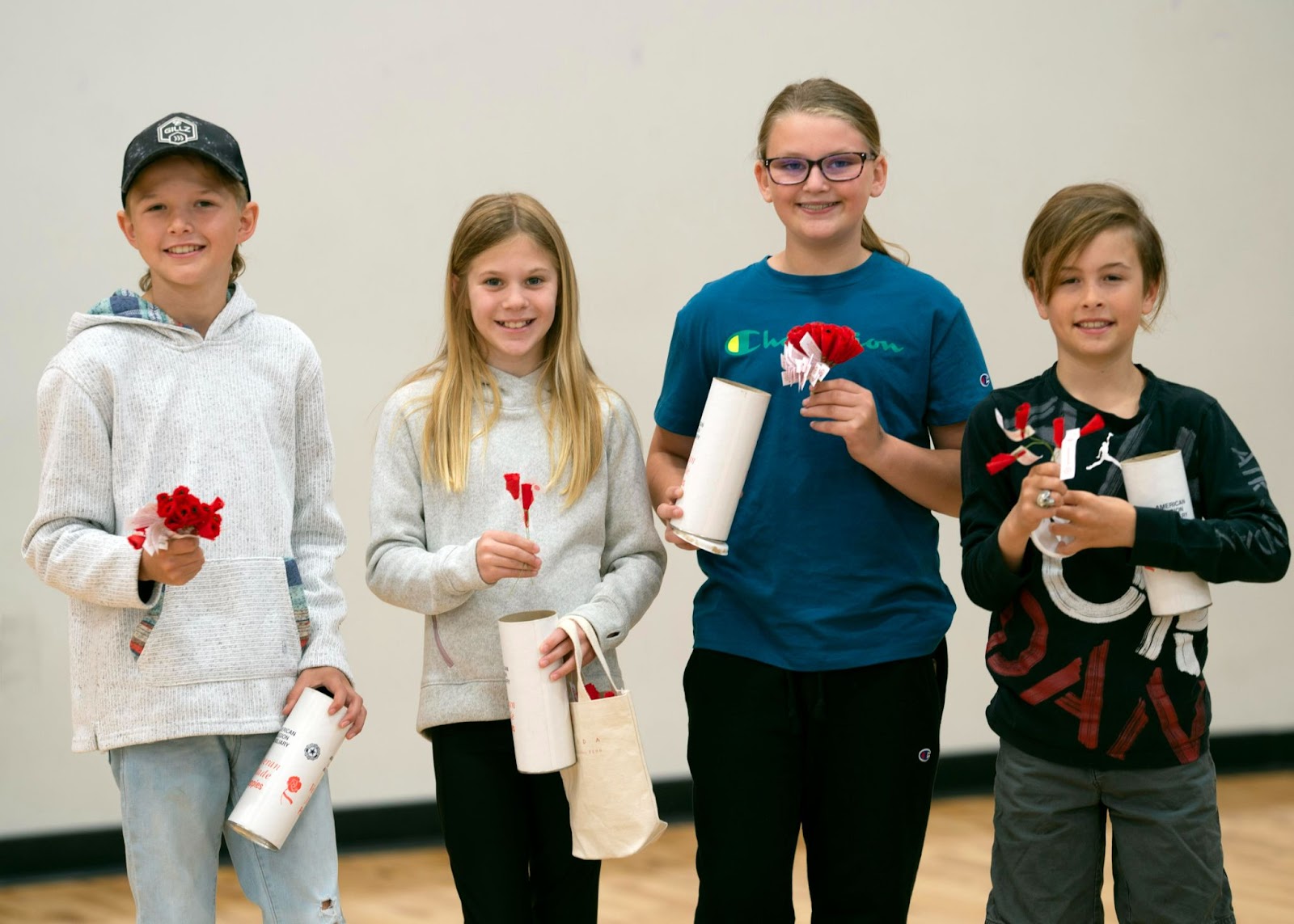 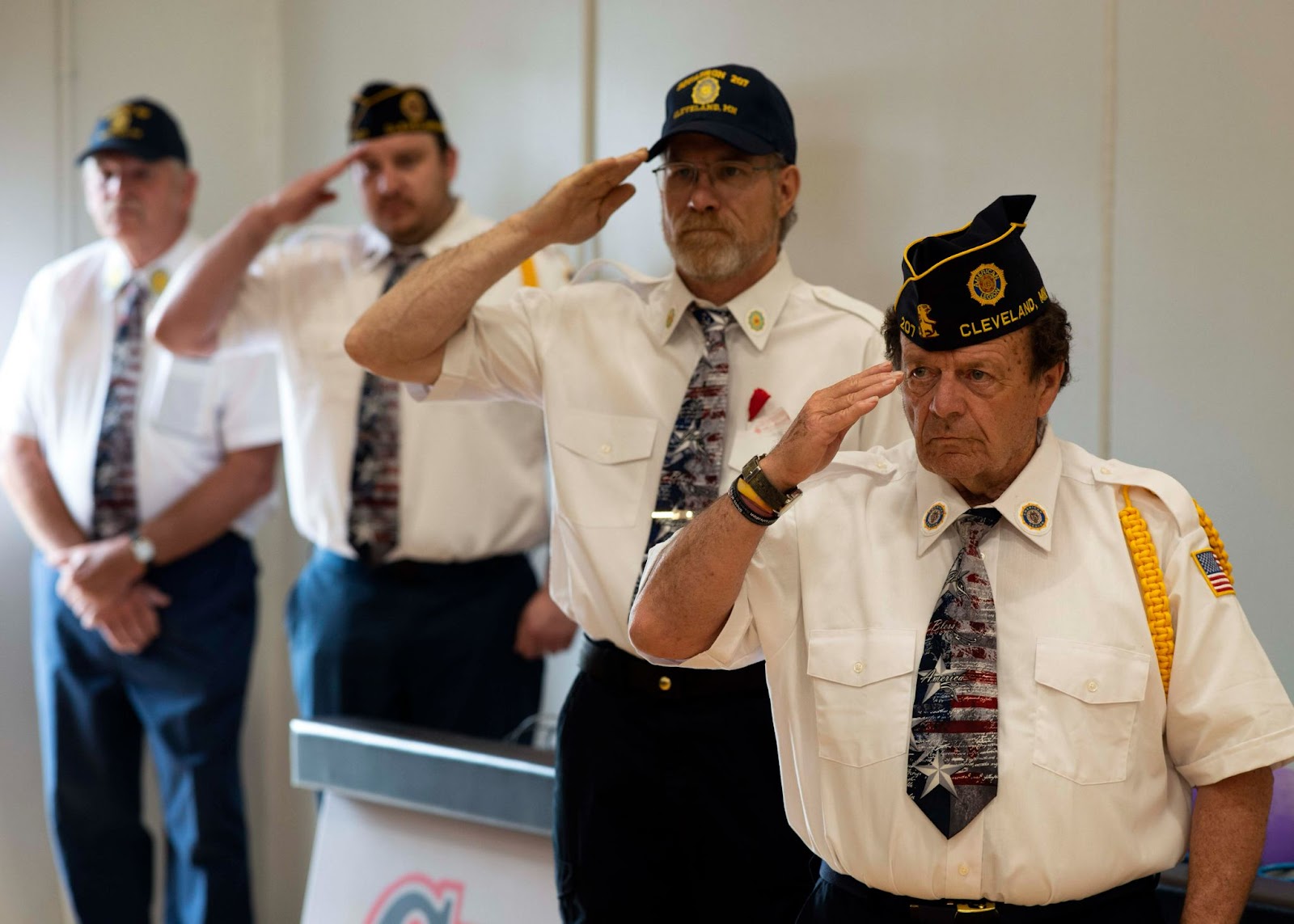 Members of the firing squad salute. In front is Steve Biehn. 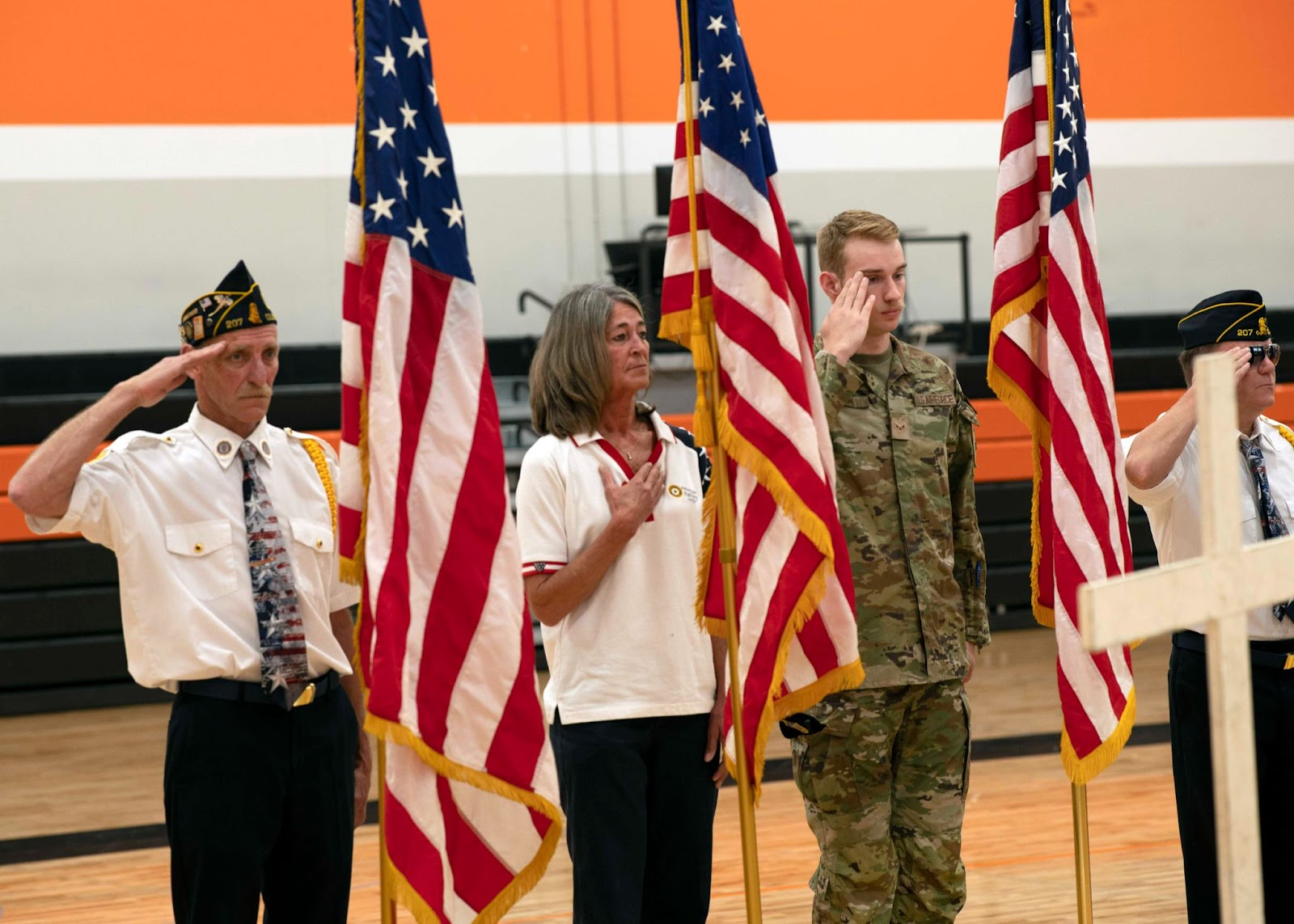 Members of the color guard salute. They are, from L-R, Leonard Seitz, Sue Eppemeyer and Brendon Brown (CHS 2019), who is active Air Force and will soon be heading off to serve in Germany. 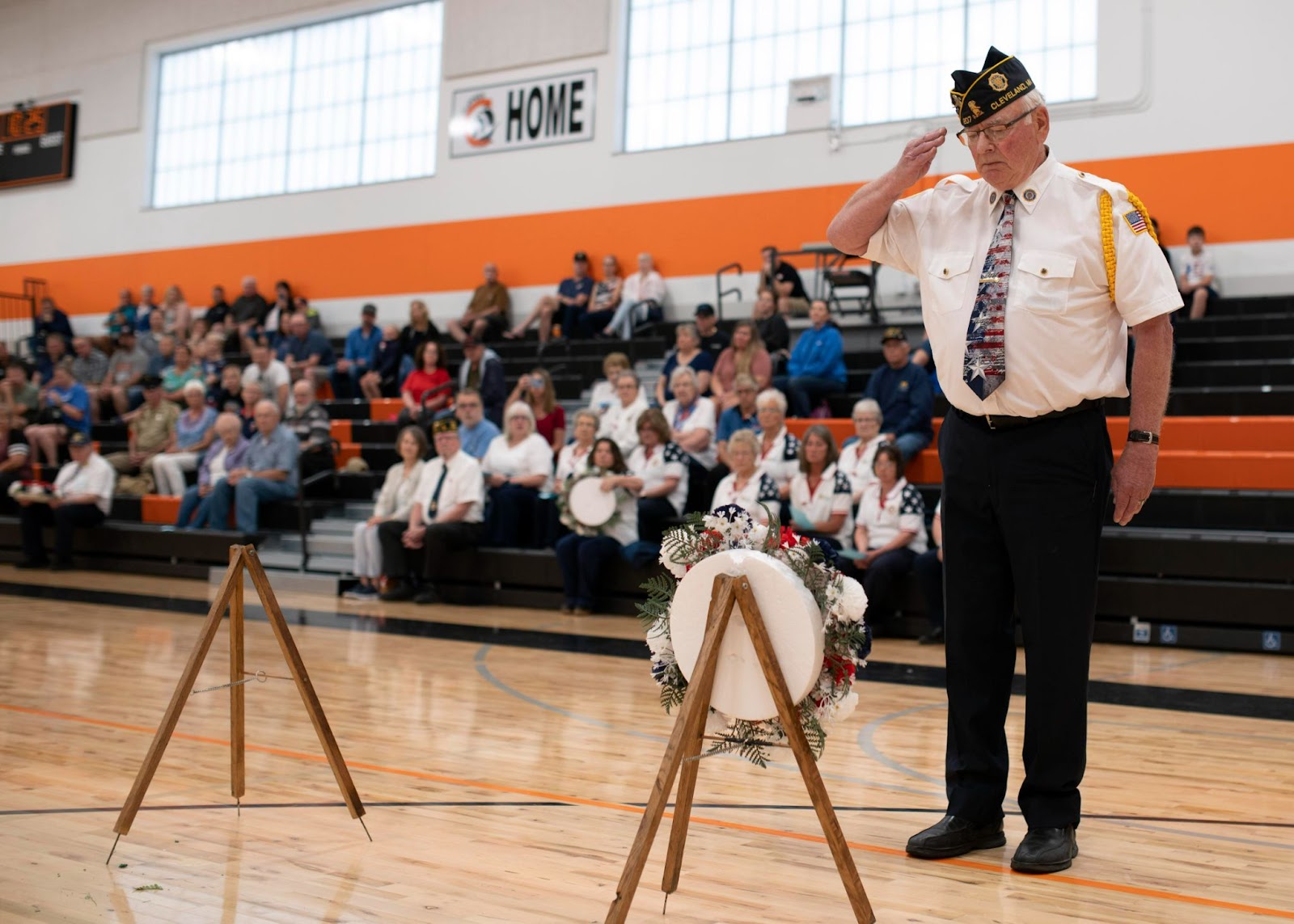 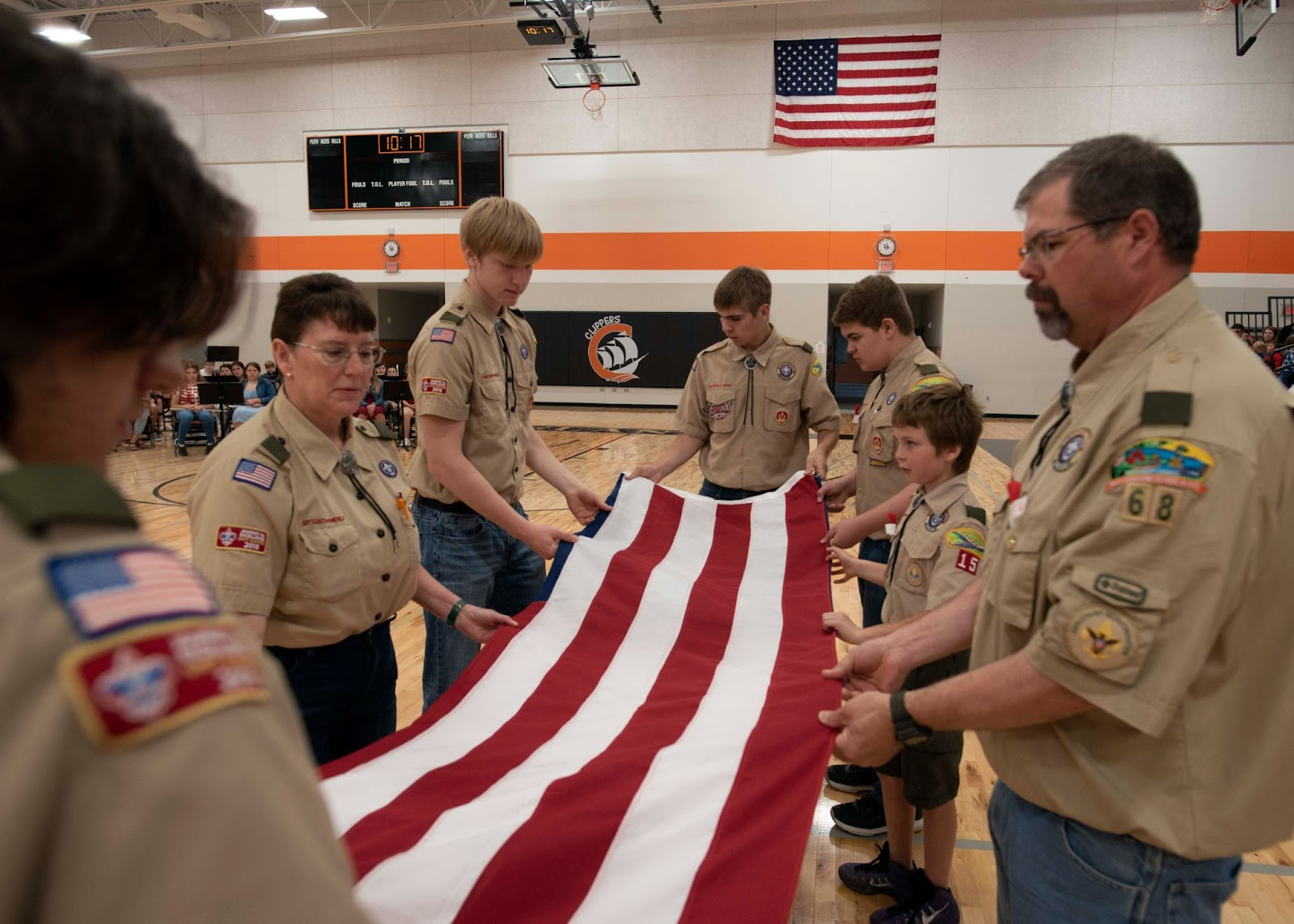 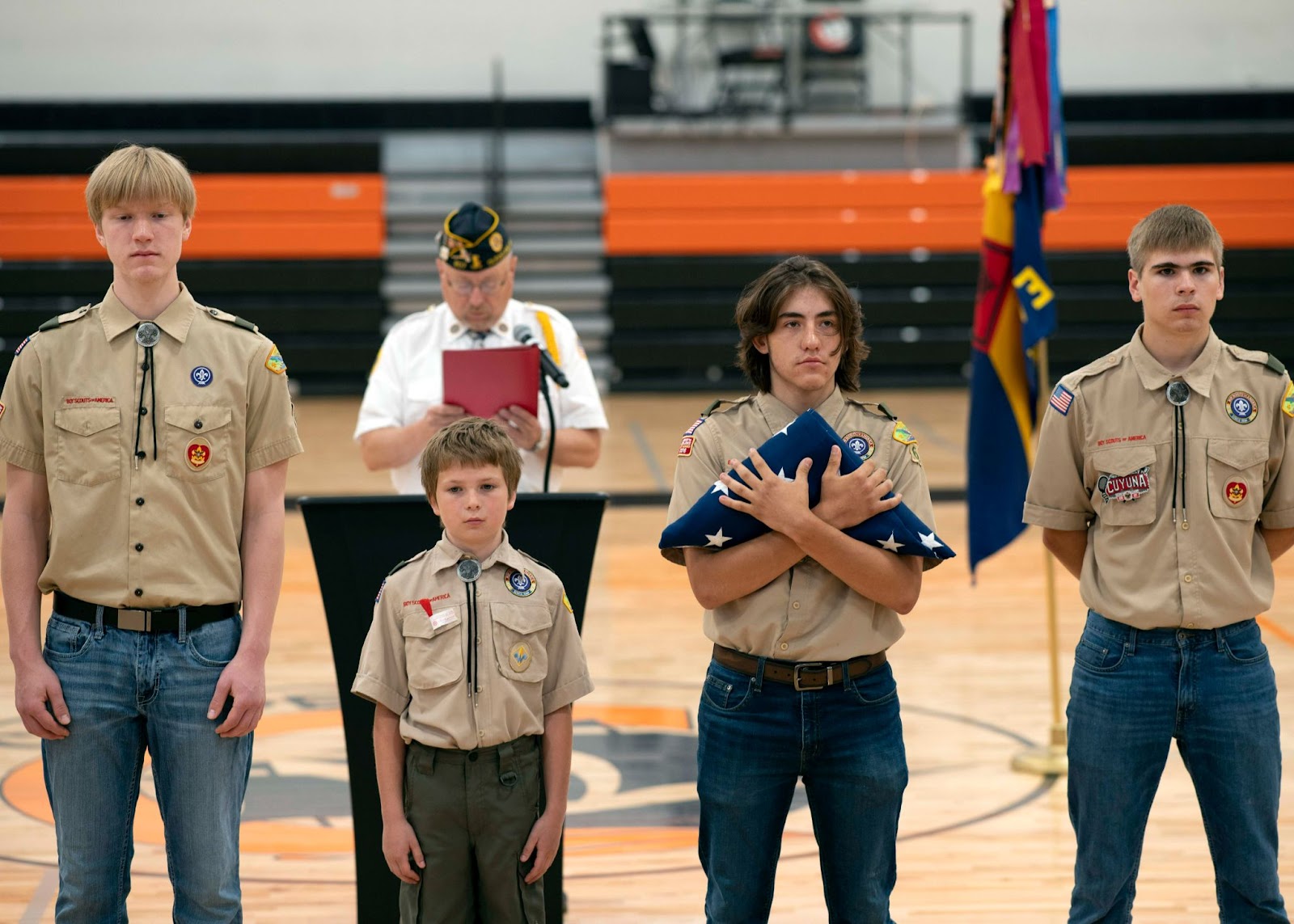 Alex Garcia had the honor of holding the folded flag. To his right are Jacob Rohlfing and August Keltgen while Dylan Zimmerman is on his left. 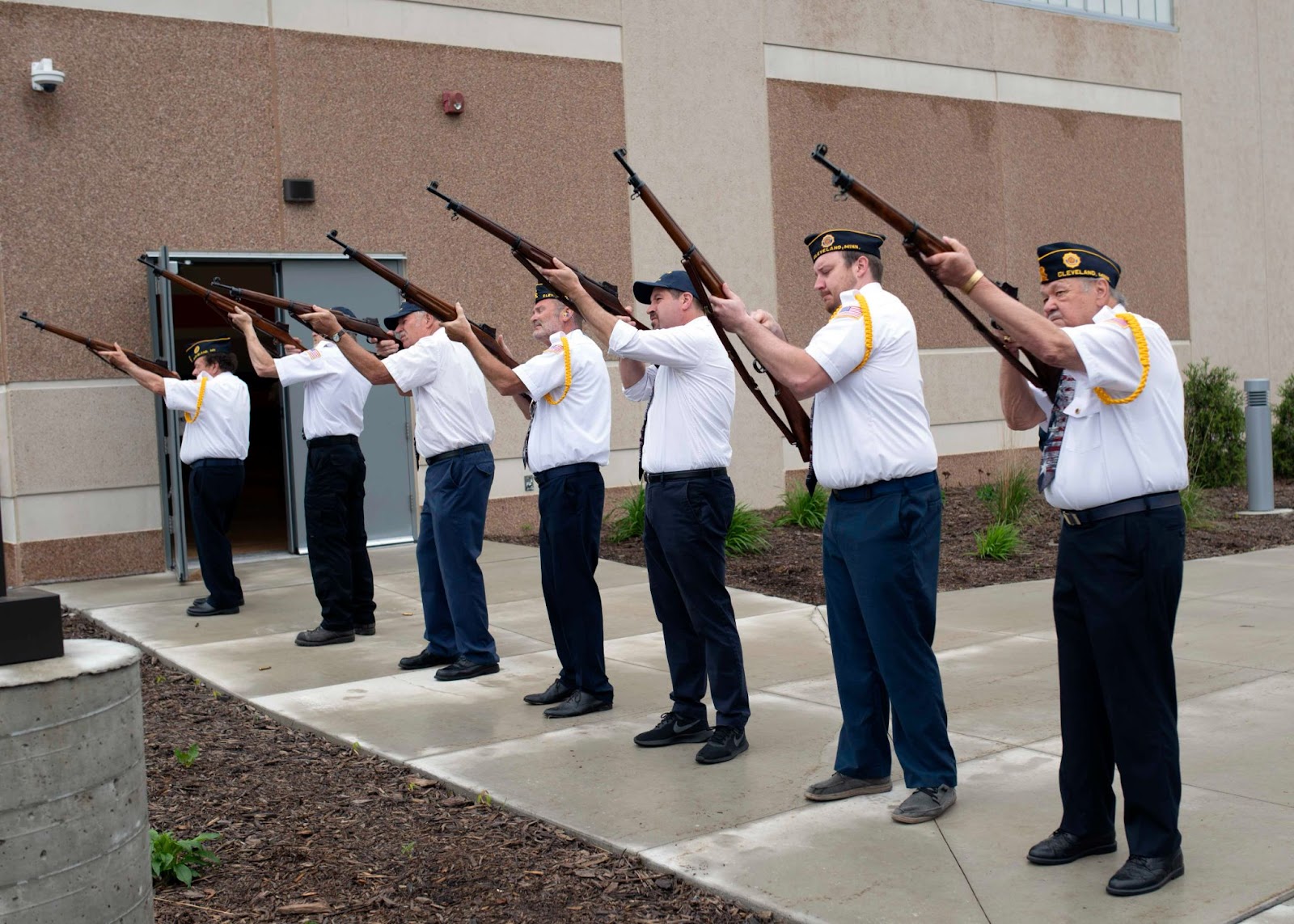 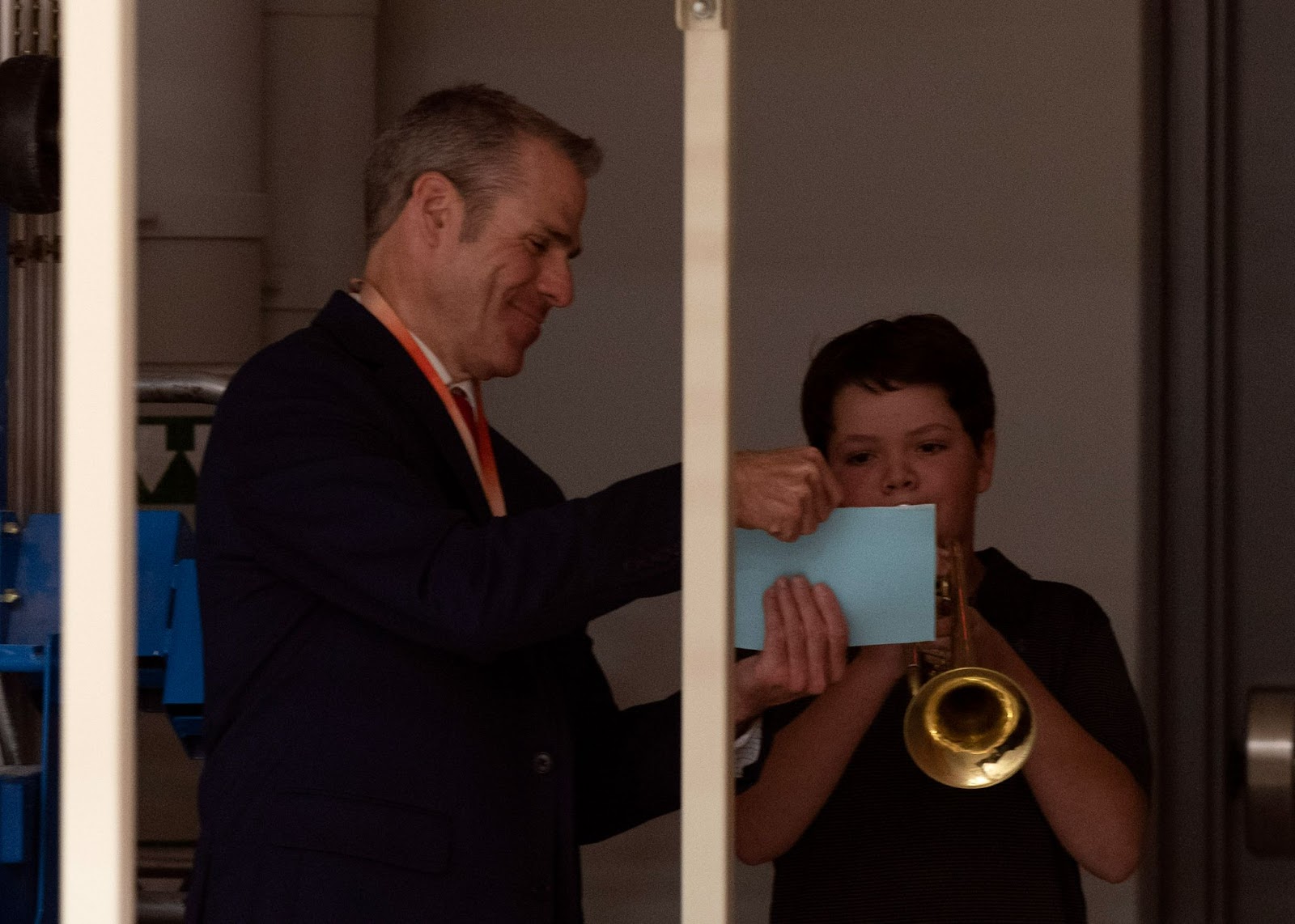 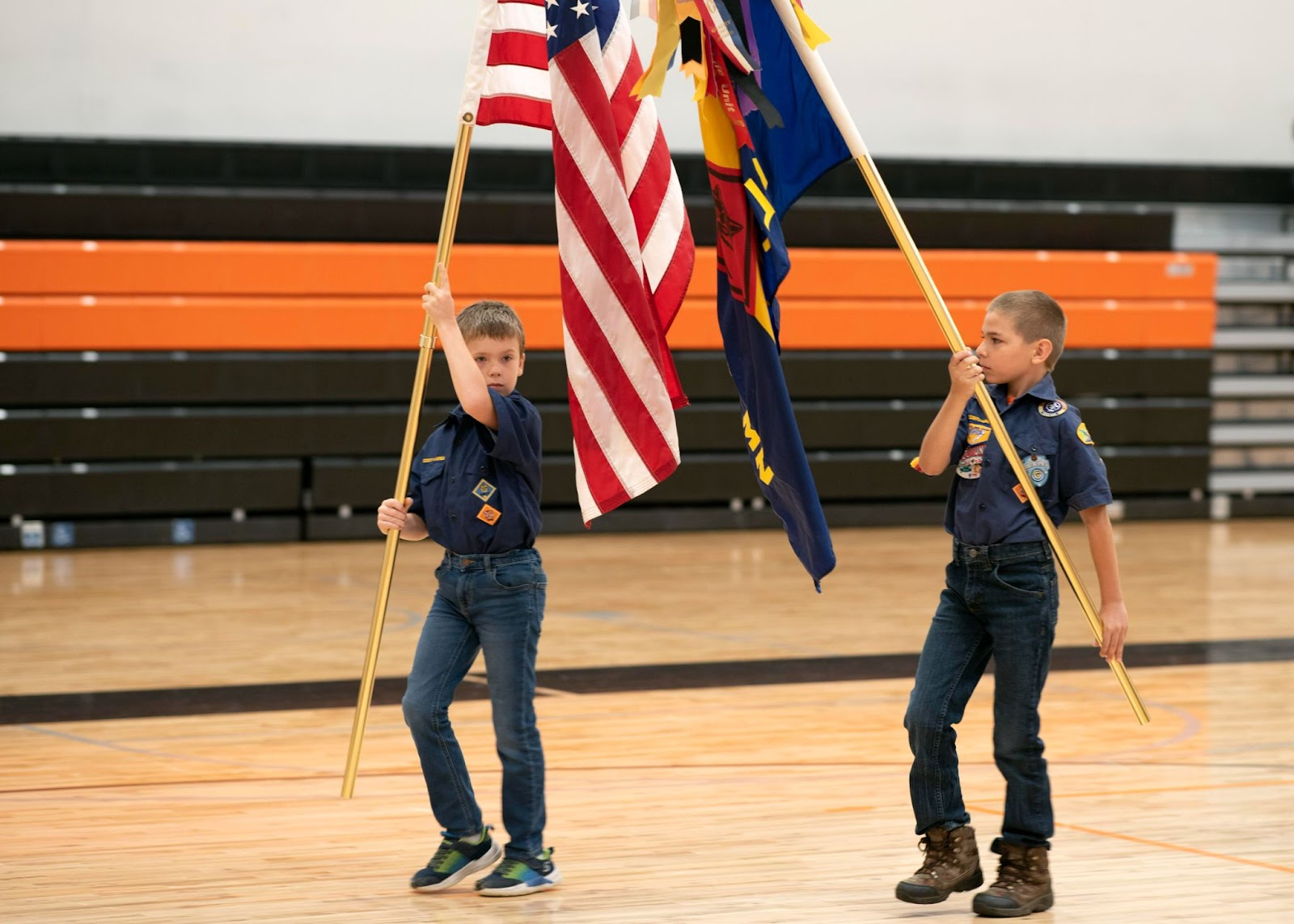 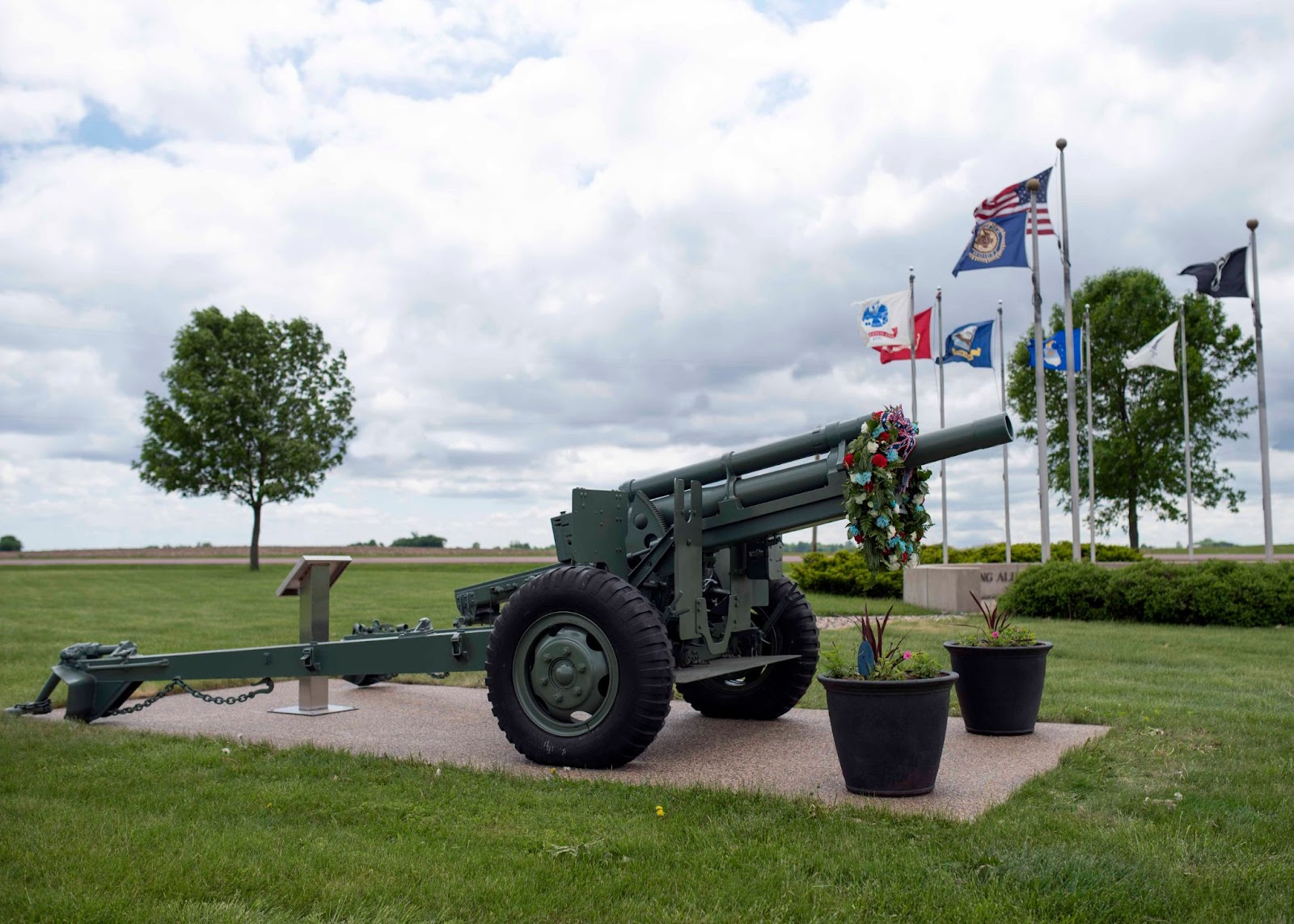 On the west end of town, where the service was originally to be held, the 105 mm Howitzer—placed there in 2004—had a new paint job and was decorated with a memorial wreath. It was refurbished with honorarium given to the family of past Cleveland Legion Commander Doug Krueger, who passed away in February. The artillery was a standard in the WWII era.