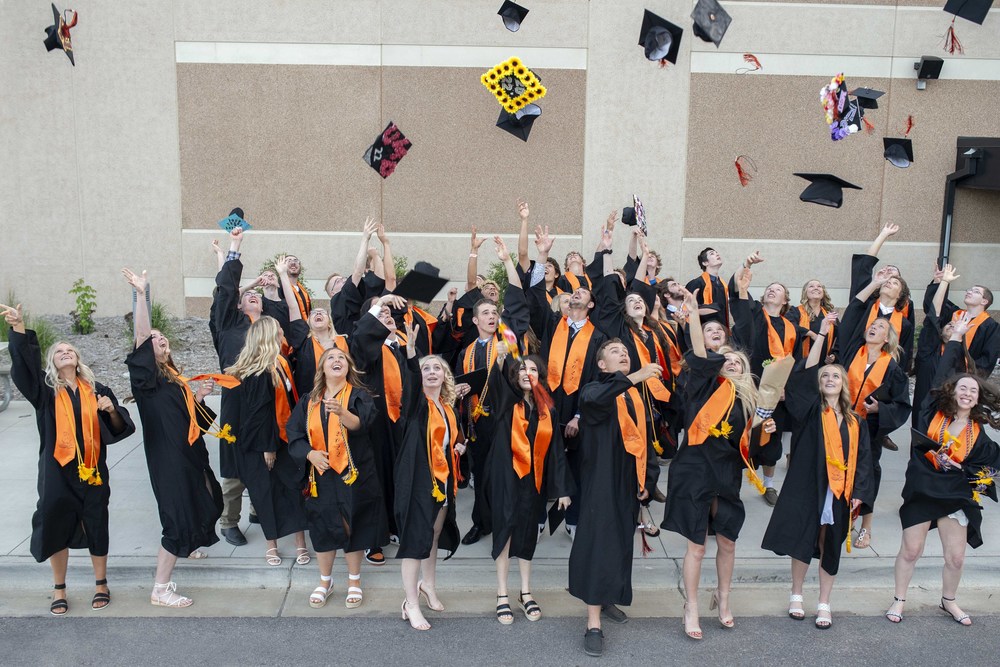 In her Honors Address at the Cleveland graduation ceremony on Friday, senior class president Ashley Connor said she wanted to find a message that she and her 43 classmates could agree upon, but that was next to impossible.

So instead, she chose a thesis that spoke to her: “The lessons we learn along the way are more important than the destination.”

To illustrate that point, she described how she struggled to learn spelling words in grade school, sometimes in tears, writing and re-writing them but ultimately failing the spelling test.

“Those childhood spelling tests don’t matter now. What does matter is the work ethic that I developed…Maybe in 10 years we won’t remember that the mitochondria is the power house of the cell or that y = mx + b, but we will remember how to be a good person, to treat others with respect, to hold ourselves accountable, to never give up and to always do our best.”

The same lesson could be applied to the graduation ceremony itself, she said.

“We won’t look back at our high school years as receiving our diploma, but we will remember it as playing in different sporting events, cheering our classmates on from the fan section, attending prom in our fancy attire and even having simple conversations during lunch and study hall. Yes, we should all be proud to be here today at graduation but graduating high school does not mean the journey is over. In fact, it has only just begun.”

Connor concluded by advising her classmates to enjoy every moment in life, “because it’s the journey that matters more than the destination.”

Emily Kern, the senior class vice president, opened the ceremony in the new gym with a welcome address. She spoke about how fast her high school years went by.

“I recall a moment in seventh grade when one of my teachers told my class and me that we should begin thinking about what we wanted to study in college and do for the rest of our lives. At that moment, I thought to myself, ‘I don’t need to worry. We have so much time left before that day comes.’ Yet here we are, graduating.”

Kern went on to say that the graduation ceremony is the culmination of many lasts.

“We have come to many ends here at Cleveland, such as the last game or meet, last performance, last time walking the halls and our last time being a high schooler. But right here today is the last of the last. This may very well be the last time some of us step foot in this very school, where we learned to dribble a ball, how to count and where we met our best friends. The sad part is the this may be the last time I see some of my classmates, whom I have spent every day with…These people have made me the person I am today. The countless hours of studying and practicing have come to an end here in Cleveland. But we must remember that graduation is not about being sad that we are leaving everything behind but celebrating the wonderful friendships and countless accomplishments we have completed. It is an outstanding achievement for each of us to have made it to where we are today.”

Kern recognized she and her classmates needed a lot of assistance to earn a diploma.

“I would like to thank our parents, family and friends for the constant love and support you have given us throughout the years. I know we don't often show it, but we are truly grateful for all you have done for us. I would also like to thank all the teachers and staff her at Cleveland for putting up with our crazy class and for the guidance and patience you have given us.”

Like Connor advised, she said the class of 2022 learned to enjoy and appreciate every moment.

“As we start the next chapter of our lives, we will never forget what we have learned here at Cleveland: to never take anything for granted and enjoy every moment that is left.”

Sixth grade teacher Brady Hahn was the guest speaker. Trying to avoid cliché’s like ‘climbing the latter of success,’ ‘reaching for the stars,’ or ‘the sky’s the limit,” Hahn turned to country music to deliver his message.

According to Garth Brooks, for example, “You know a dream is like a river. Ever changin' as it flows. And a dreamer's just a vessel that must follow where it goes.”

Hahn said, “life will take you down twists and turns that you don’t see coming and that you have no control over. You can, however, control how you mange those obstacles.”

Or, according to John Michael Montgomery, “Life's a dance you learn as you go. Sometimes you lead, sometimes you follow.”

“You, seniors, are ready to do both,” Hahn said. “Be a leader at all times. Take direction and follow at other times. And yes, life is a dance. As you know, sometimes dances can be a lot of fun and put a smile on your face. Other times they feel awkward. Your partner isn’t working out. You can’t find your rhythm. My best advice is when this happens is step it up, put yourself out there, put a smile on our face and move.”

Hahn concluded by recalling what he tells his sixth graders.

“Imagine your life like you are on a tightrope. On one side of that rope is work while on the other side is fun. Both are equally important, but never overdo one so that it throws off the other….I know your potential to be successful is limitless, and I am excited to see what the future holds for you.”

About $30,000 in scholarships were awarded, most as diplomas were handed out. Kortuem won the Mike Struck memorial scholarship. Kern took home Andy Struck memorial. Presented before the diplomas, both were for $1000.

Kern and Krenik each earned $250 form the Cleveland Booster Club. Earning $500 awards from the Cleveland Fire Department were Klingel, Krenik, Ryan and Lucas Walechka. Erickson and Madisyn Steen each won a $250 award from the Redman Club in St. Peter.

Anderley earned the Androli, an award presented every year since 1948 that is based on scholarship, school and community service, leadership, participation in extracurricular activities and character. Connor took home its counterpart, the Athena Award, which was established in 1981. 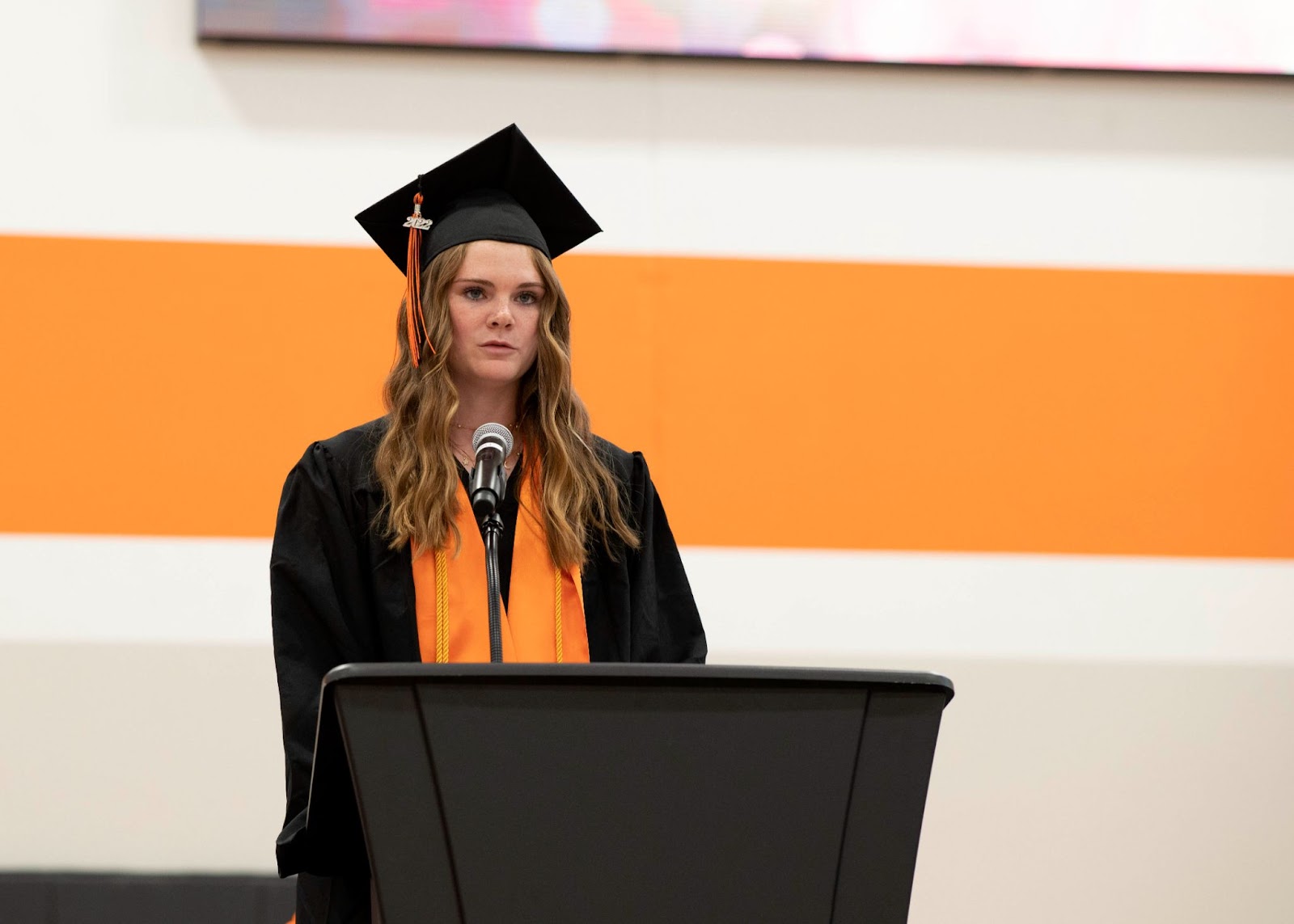 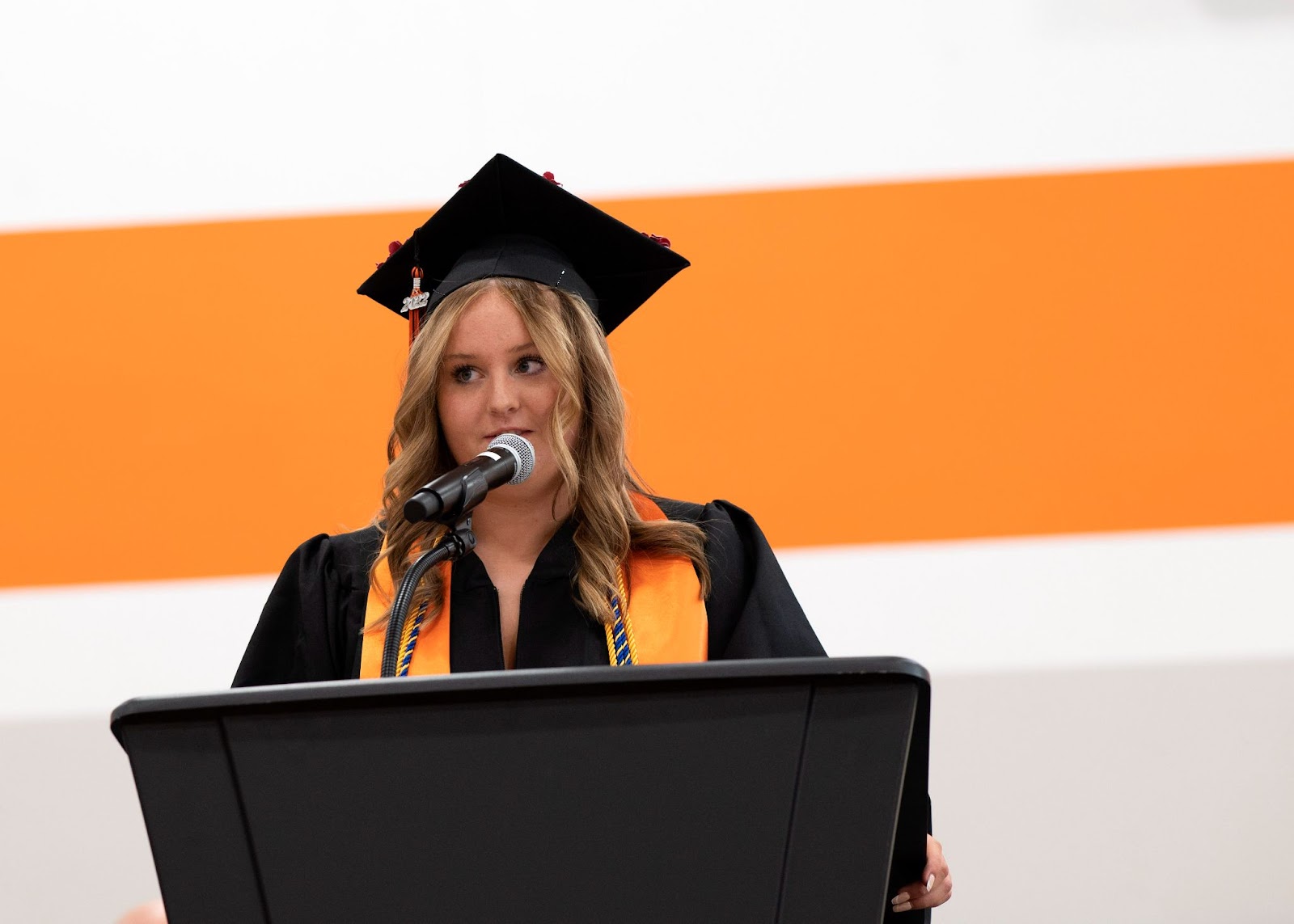 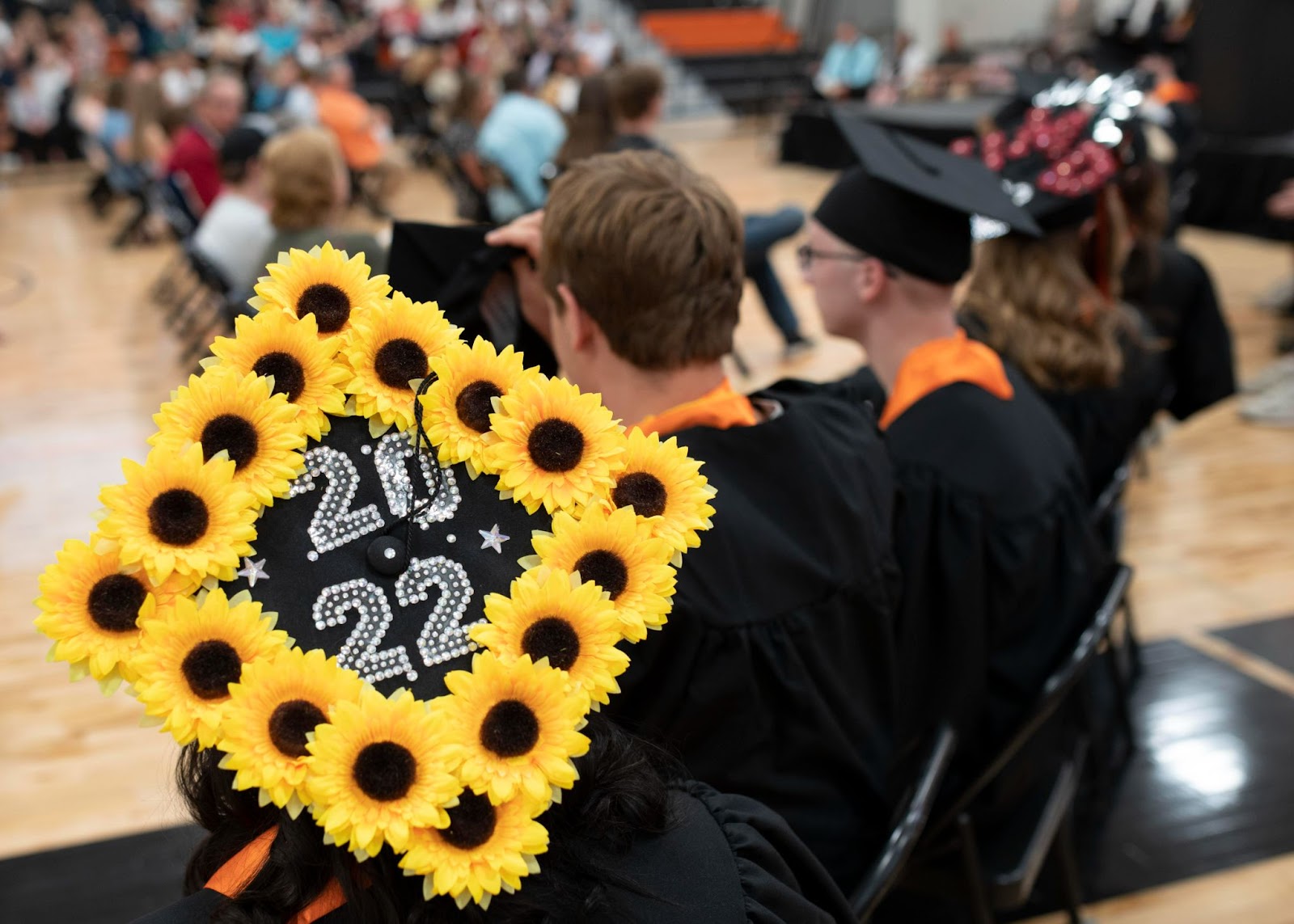 For many, their mortarboards were a place to express themselves. 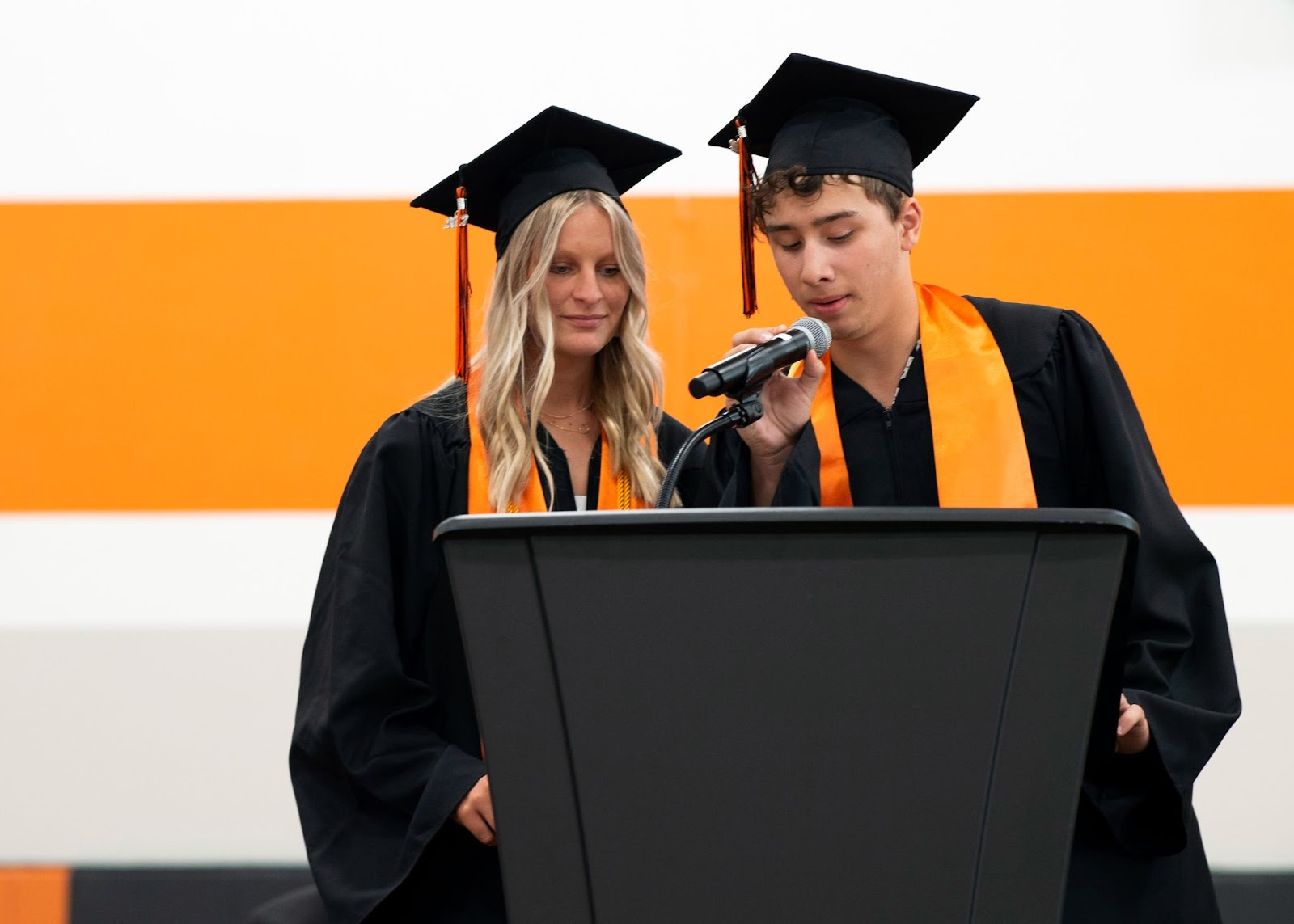 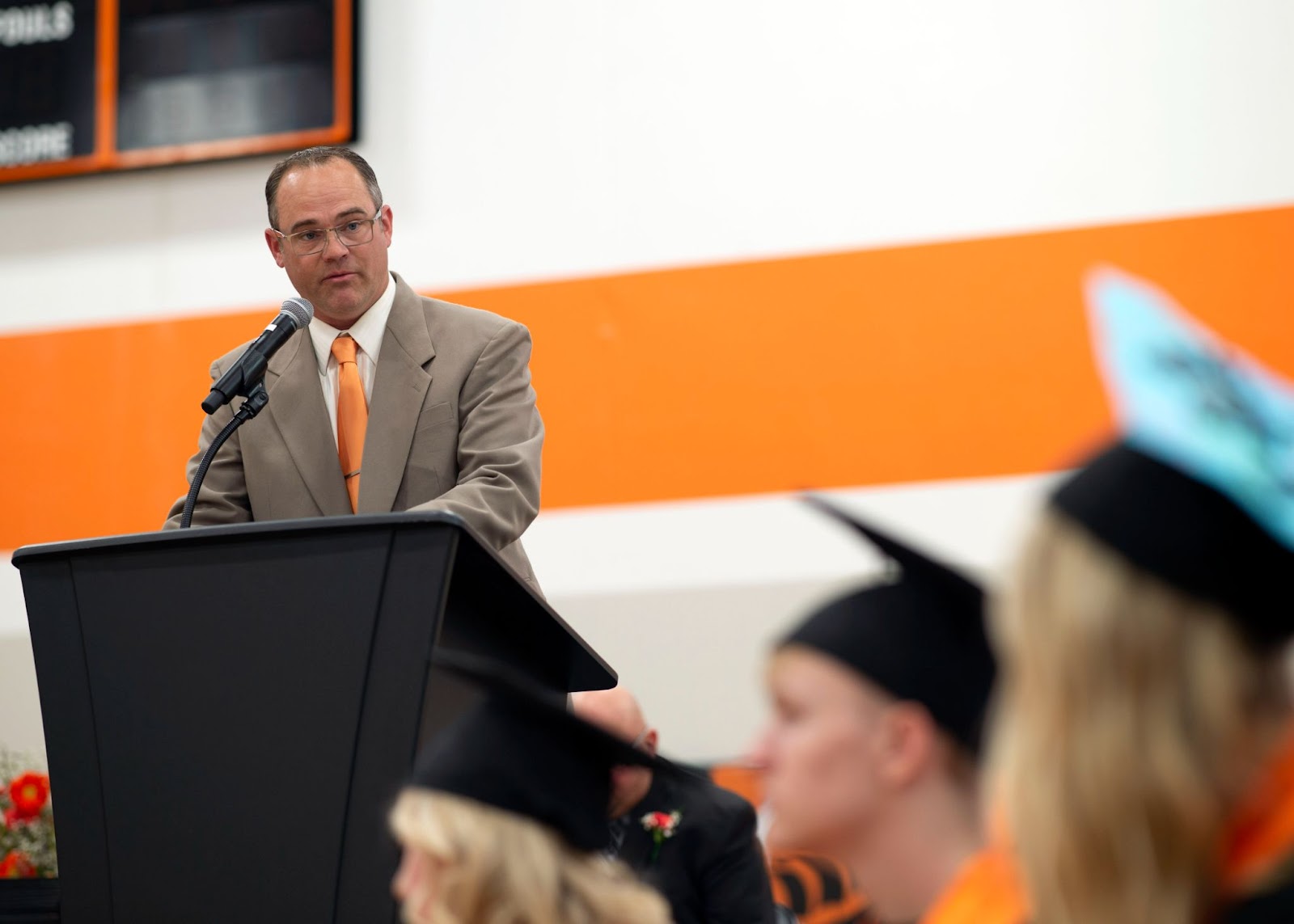 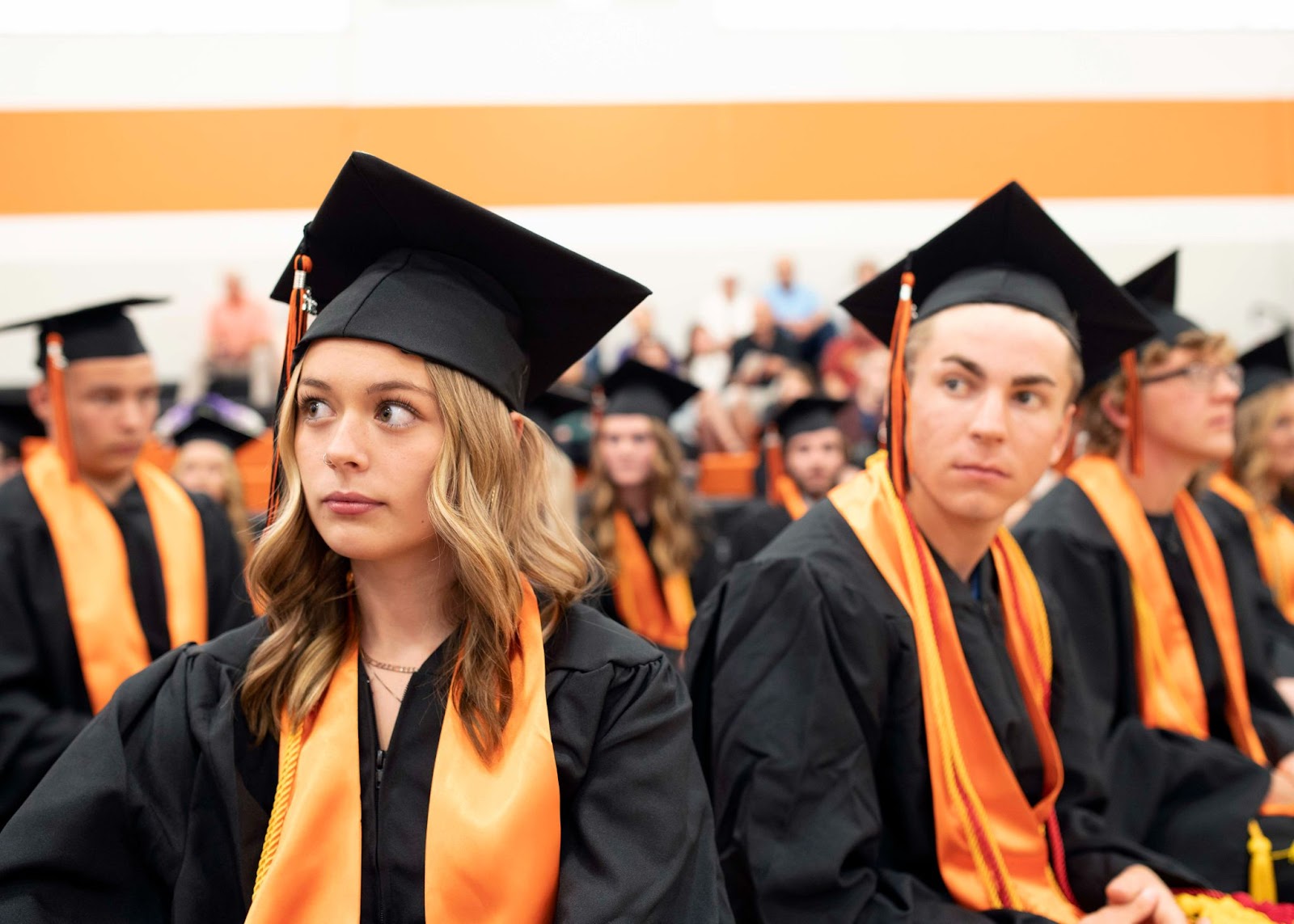 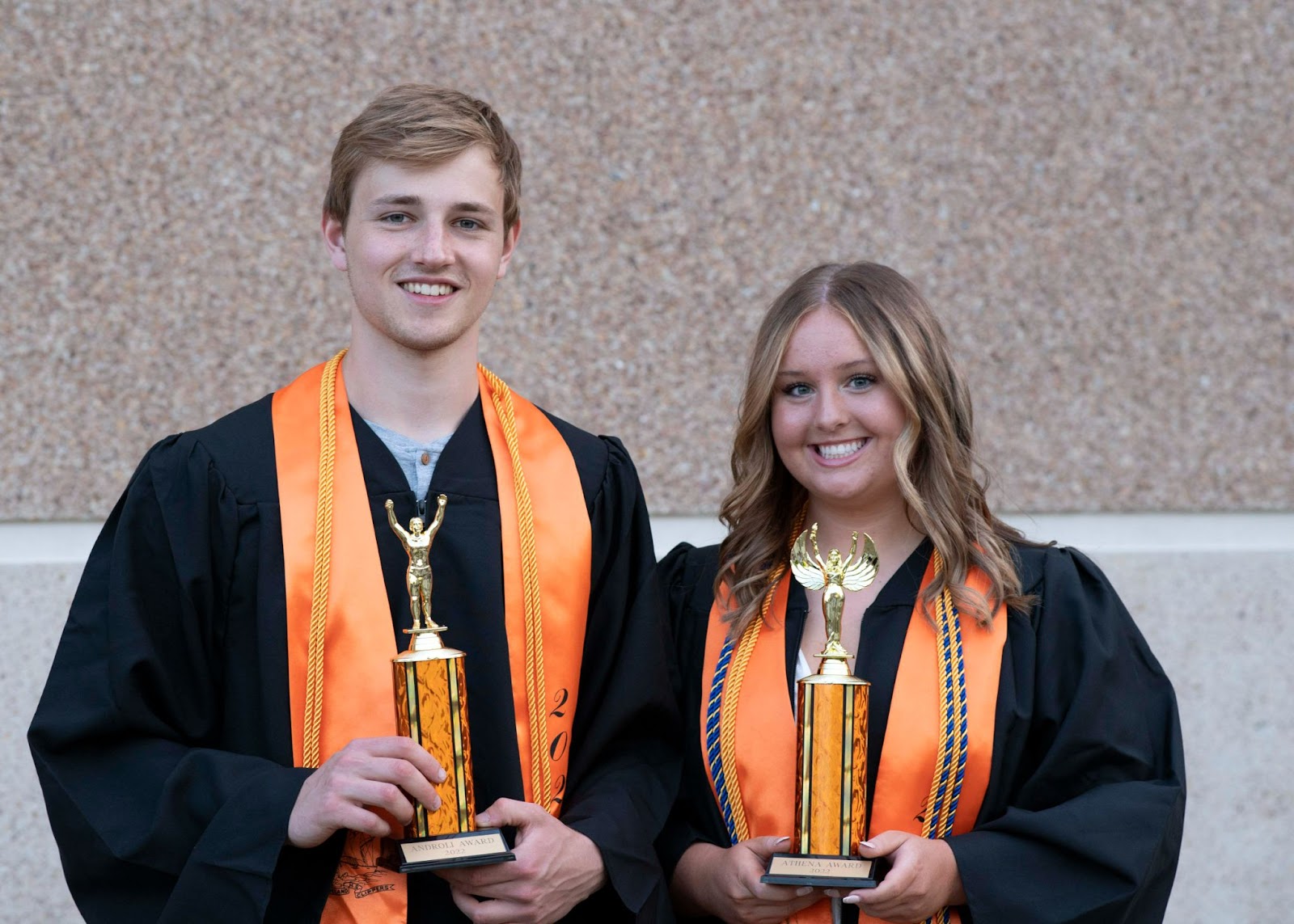 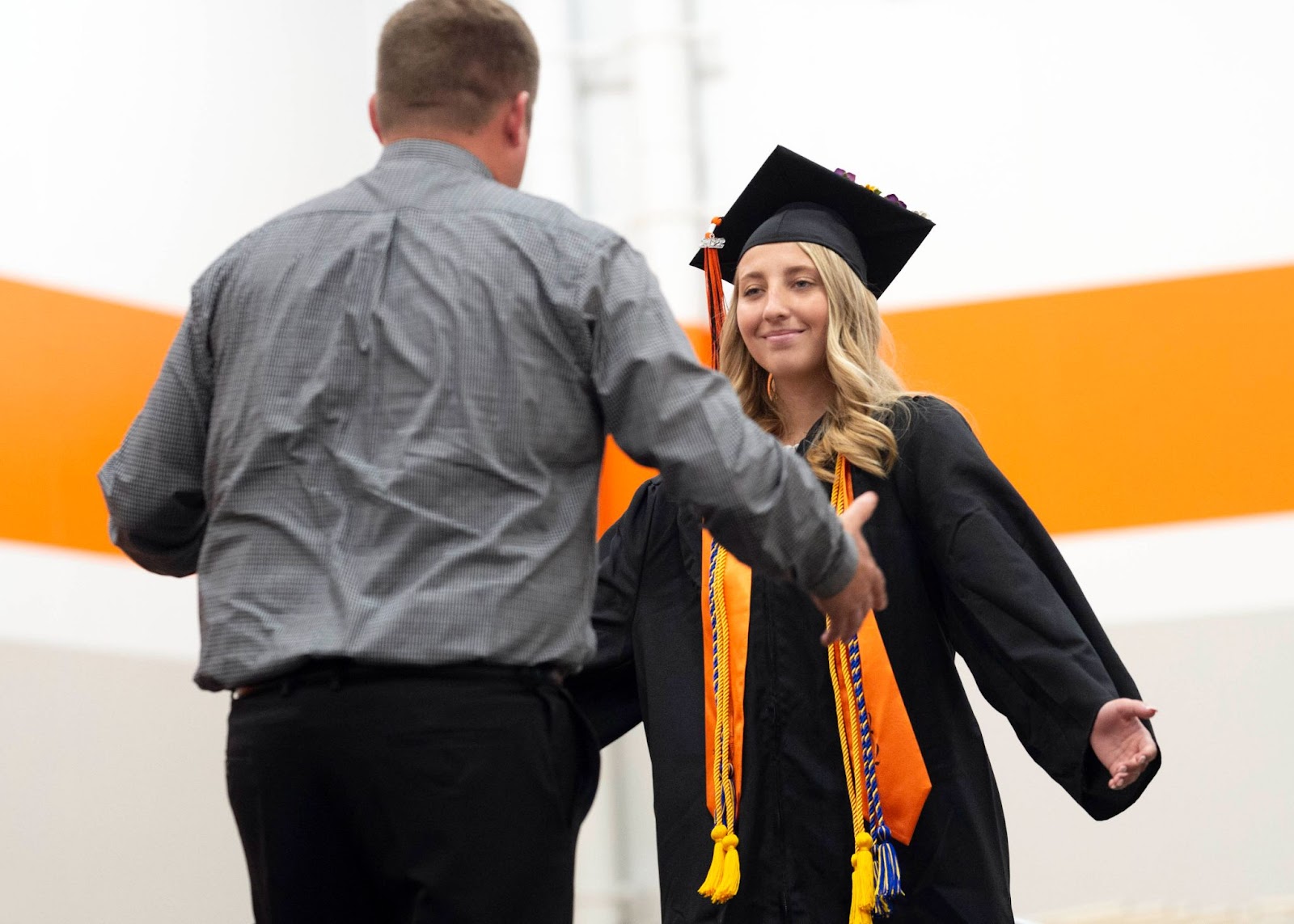 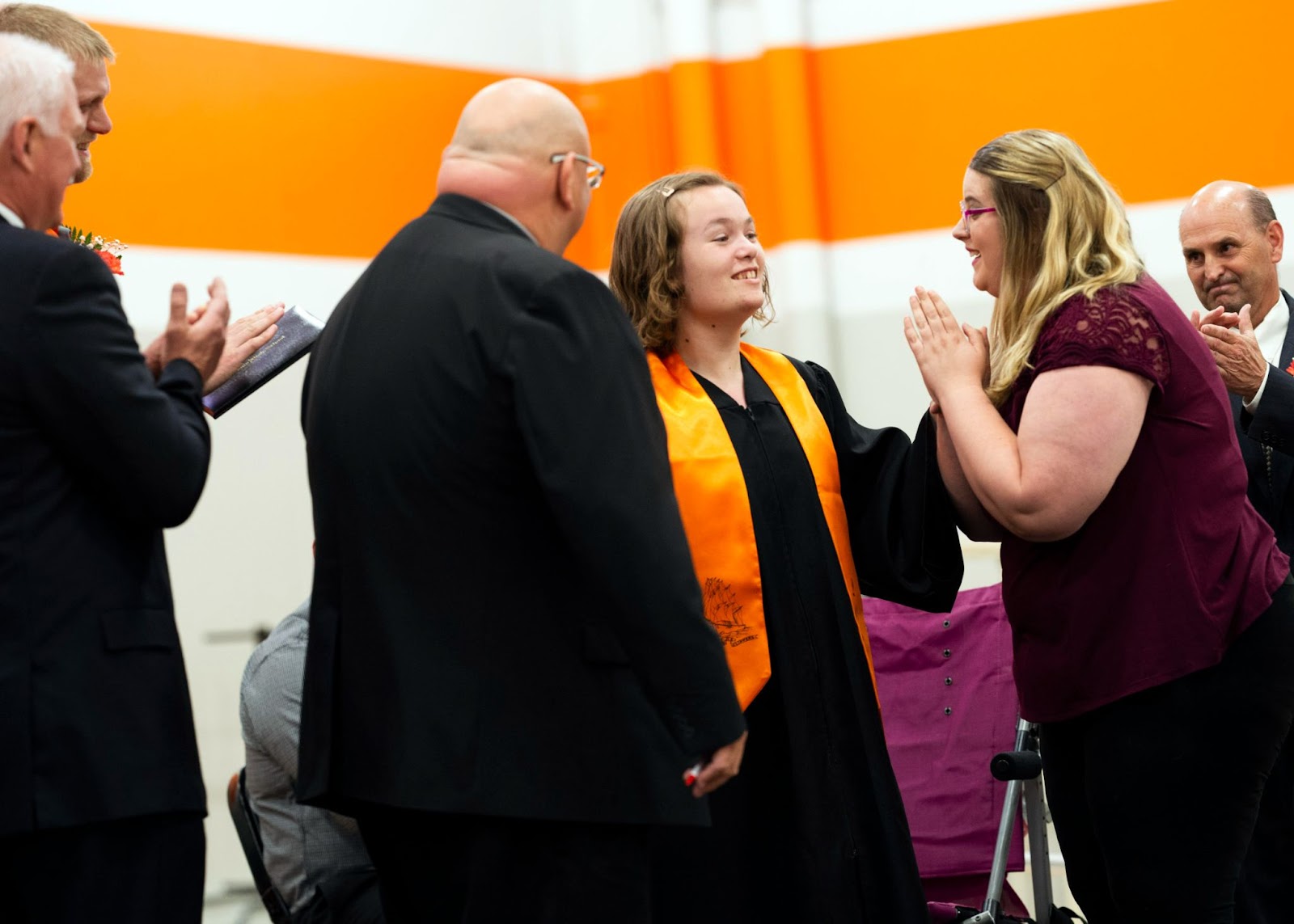 In one of the more memorable diploma presentations ever, Peyton Rysdam got up and out of her wheelchair. 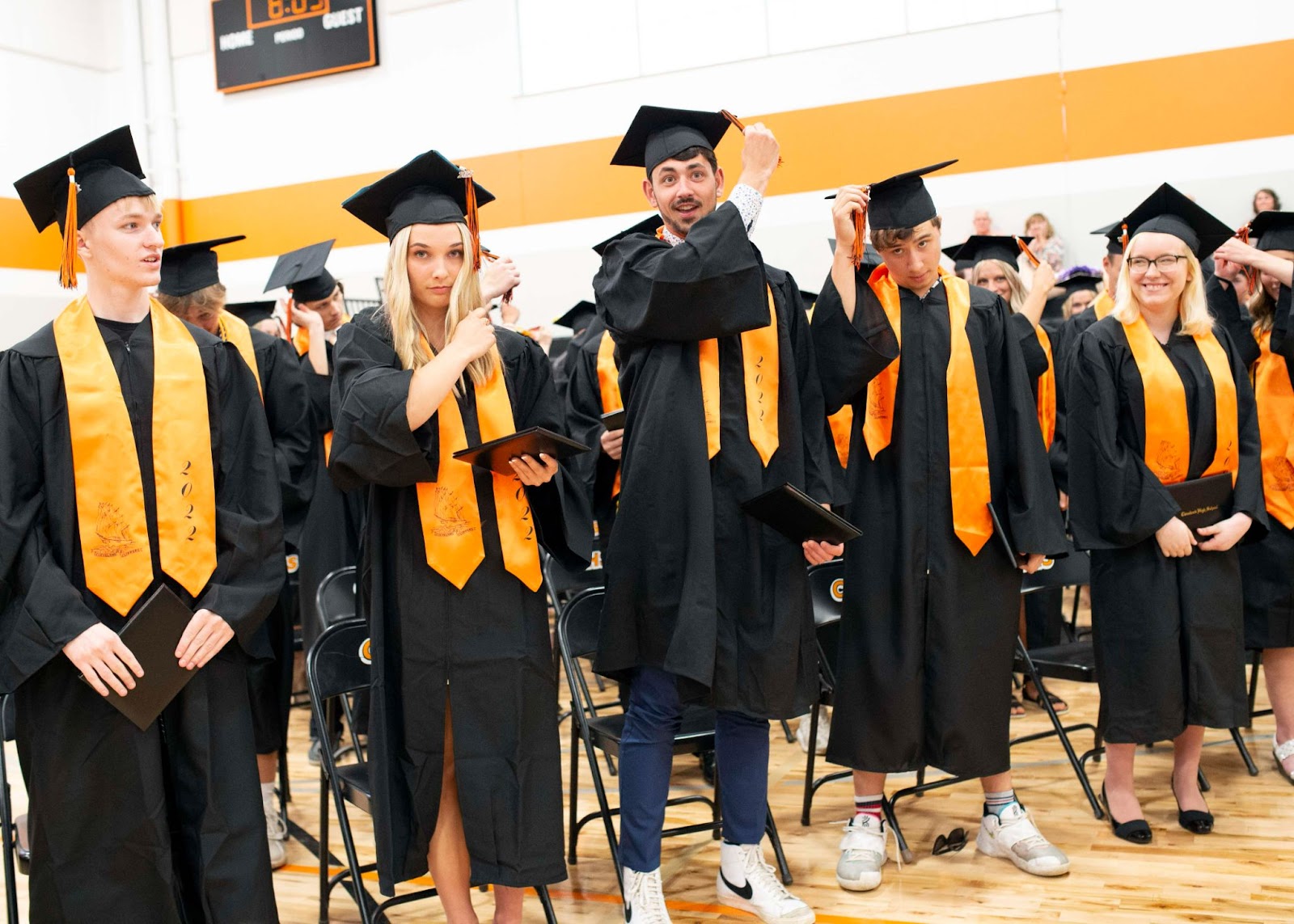 Members of the class of 22 flip their tassels from right to left, signifying them as graduates. In the center is Kolby Gens. To his left are Taylin Gosch and Josh Haynes. To his right are Ethan Fuller and Makenzey Fischer. 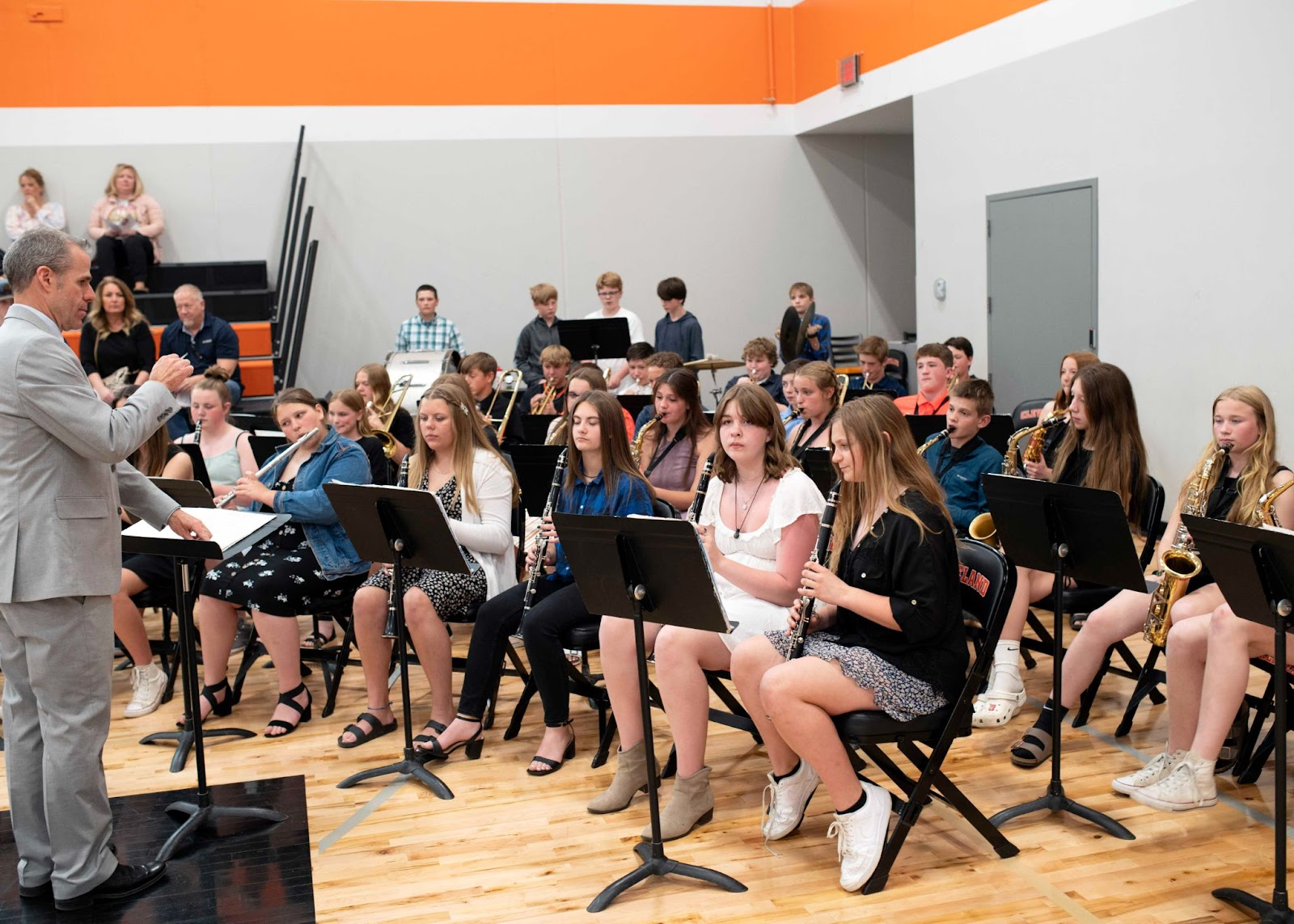 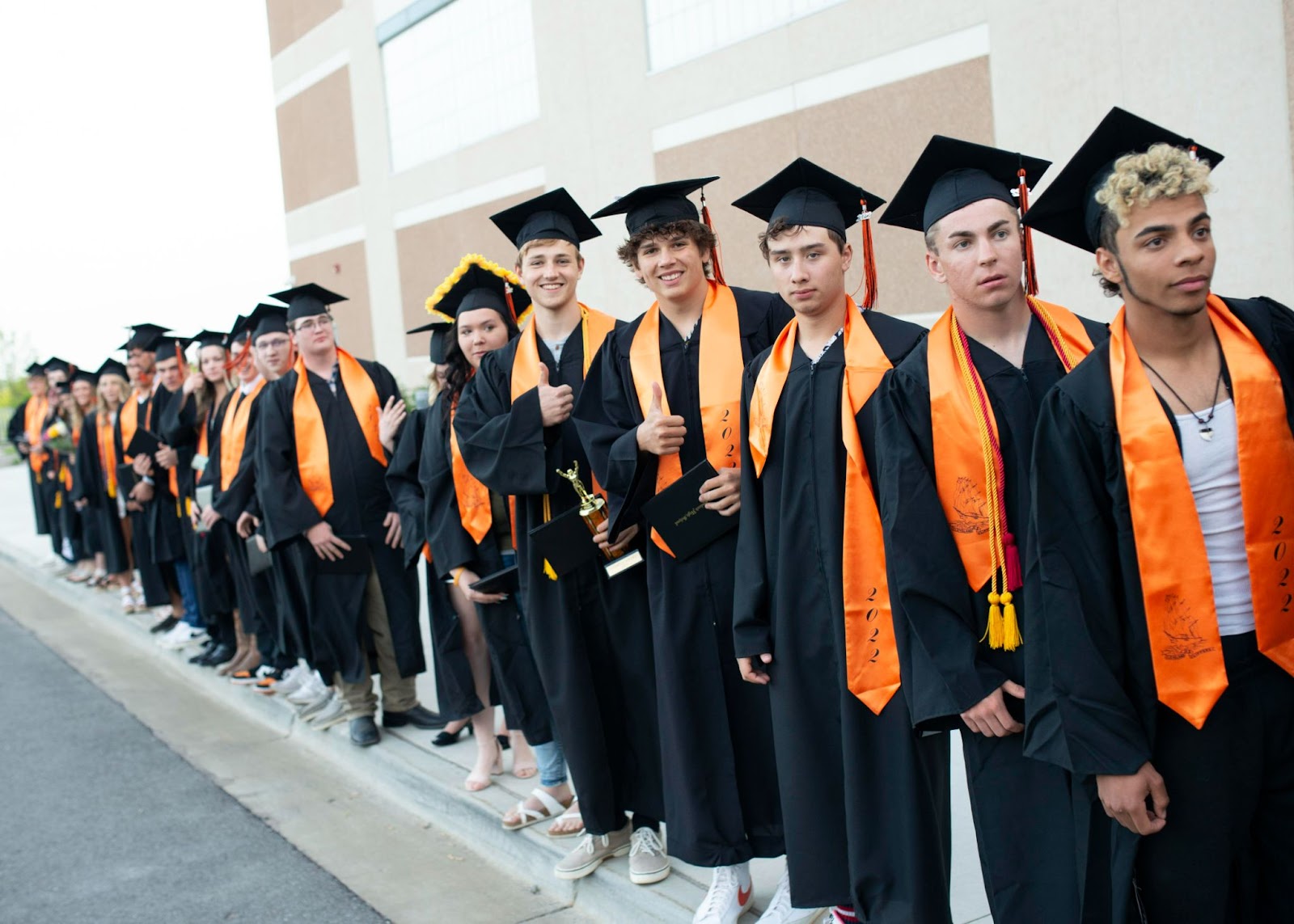 Graduates line up outside after the ceremony to greet the crowd.