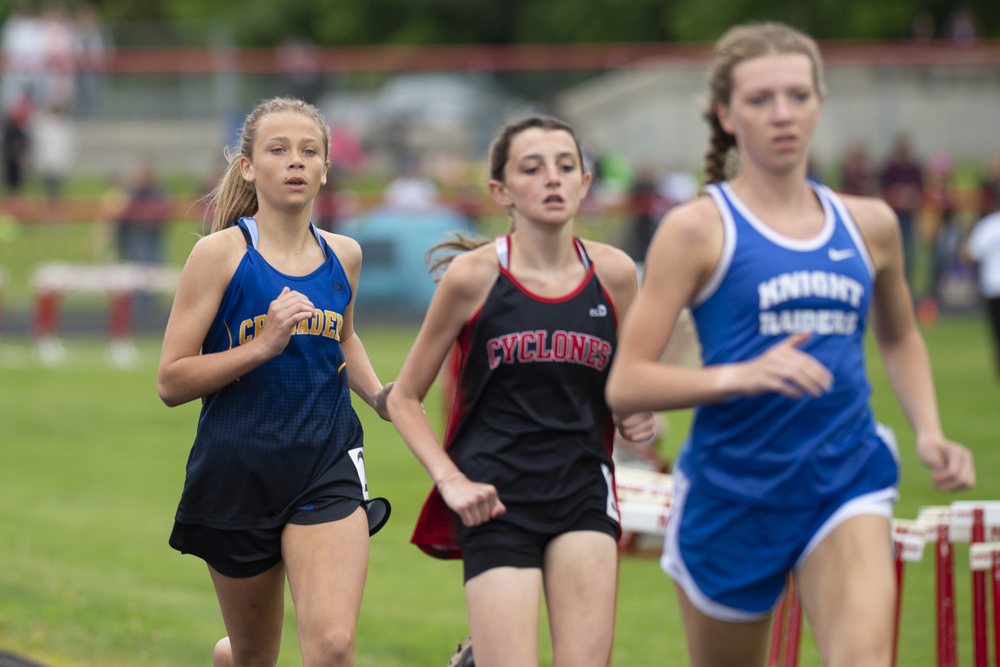 Meyer punches a ticket to state meet in 1600

For three quarters of the 1600-meter run at the section meet on Saturday, Savannah Meyer (above) battled elbow to elbow for the second position.

But on the fourth trip around the Mankato West track, the freshman bore down, passed the runner just in front of her and, in a personal record time, crossed the finish line in second place to punch a ticket to the state meet.

Meyer had won the subsection 1600, and she was the number-two seed coming in, but timewise, she was number three. She finished about 2.5 seconds behind the winner Grace Moeller from LCWM/Nicollet and over 6 seconds in front of the runner from St. Clair/Immanuel Lutheran.

“I wanted to just follow behind her until the last 200 meters,” said Meyer. “She started coming on toward the end, but I thought I could get her and just kept going.”

Head coach Dale Compton said Meyer has been lowering her times when it matters and, lopping just under 13 seconds off from her PR at subsections, ran the race her coaches wanted.

“She has been coming on strong all year, getting better all the way through. We talked about just getting out. Everyone knew Grace Moeller was going to be number one. We told her to get that second or third spot, but you have to get out, and she ran exactly how we wanted her to; she ran the perfect race. She sat in third for most of it and then unleashed the kick with 200 to go to get to state. It was a great race for her.”

Meyer is new to the mile this year. While it was only her third timing running the distance in competition, she also ran at West in the section meet last year, and the experience paid off, Compton said.

“She had a chance to be on the track, and I think that helped. She was excited, but her nerves weren’t there this year.”

Like Meyer, most of the Crusaders set new personal records at the section meet.

“That’s the goal at the end of the year,” Compton said. “You always want to run your fastest times, and most have been PRing.”

The top two finishers in individual events and the top team in relays advance compete at the state meet, but there are also qualifying times or distances.

Also earning a trip to state for the Crusaders was Kylie Kolars in the high jump. Her 5-01 gold-medal leap was 3 inches higher than her qualifying jump at subsections.

Simon Morgan took third in the 100-meter-high hurdles but qualified by standard.

Aidan Gravelle finished first in both the wheelchair 100 and 1600 to earn a trip to the state meet.

Meyer also competed in the 800. After leaving it all on the track in the mile, she slipped 7 seconds from her PR in the 800 and came in ninth of 15 runners.

Henry Strobel led off the 4x200 team, which—missing a runner due to illness—crossed the finish line in seventh place.

Selly and Nathan Strobel’s 4x800 quartet finished in sixth place but bested its qualifying time by over 6 seconds.

Henry Strobel took 15th in the triple jump. His leap of 36-11.00 was 3.25 inches less than what he jumped in the subsection meet, not as long as he had hoped.

This year, track went from a two to a three-tiered classification, so TCU, Belle Plaine and others, which used to be in Section 2A, went to Class AA. With the change, section 2A also went from four to two subsections, so the top eight individuals and top four relays qualified there.

Held at St. Michael-Albertville High School (NW of the Twin Cities), the state meet starts today (Thursday). Meyer is scheduled to run on Friday at 5:52 pm. The best seed time in the 16-runner field is 5:19.74. 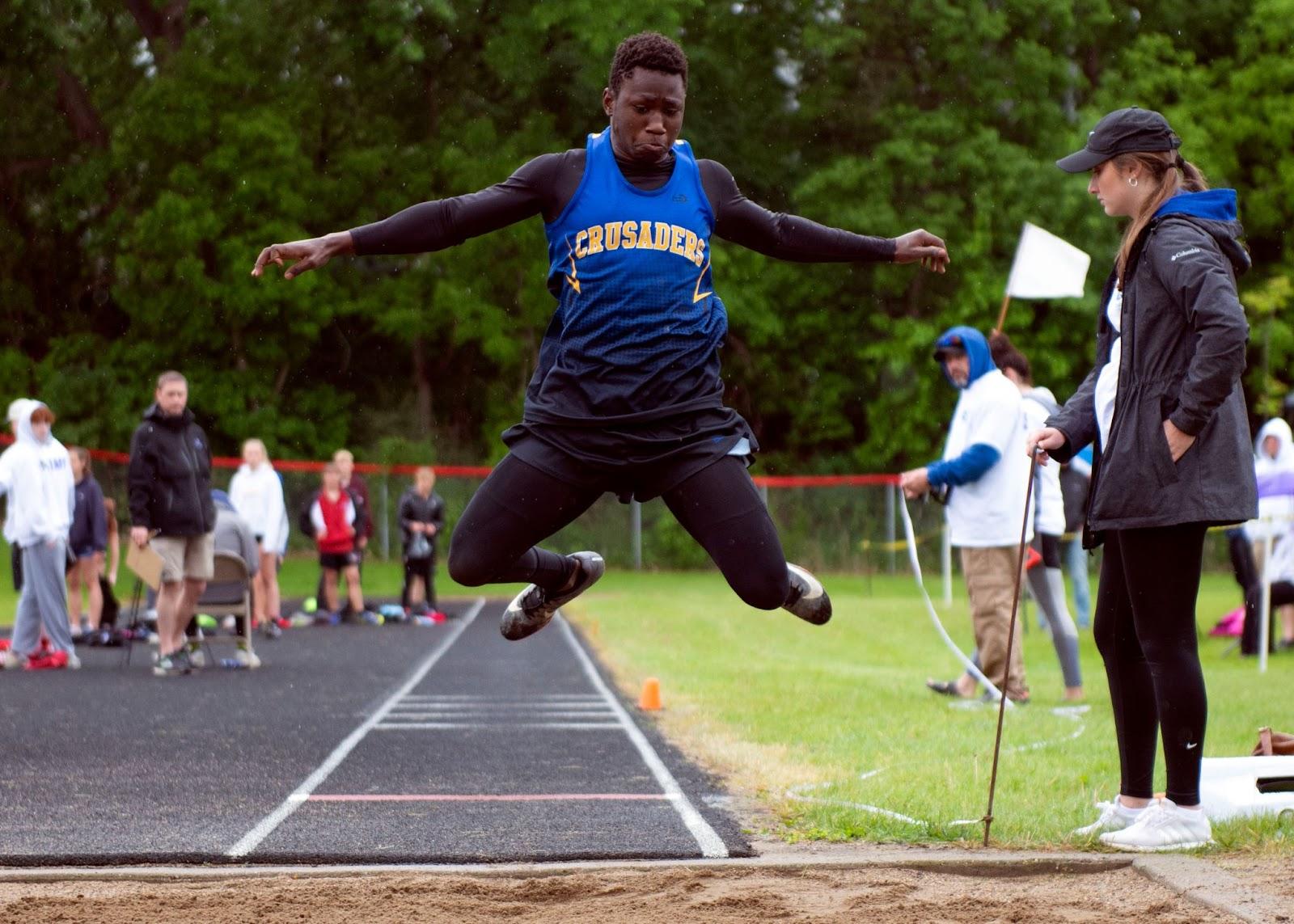 Henry Strobel in the triple jump. 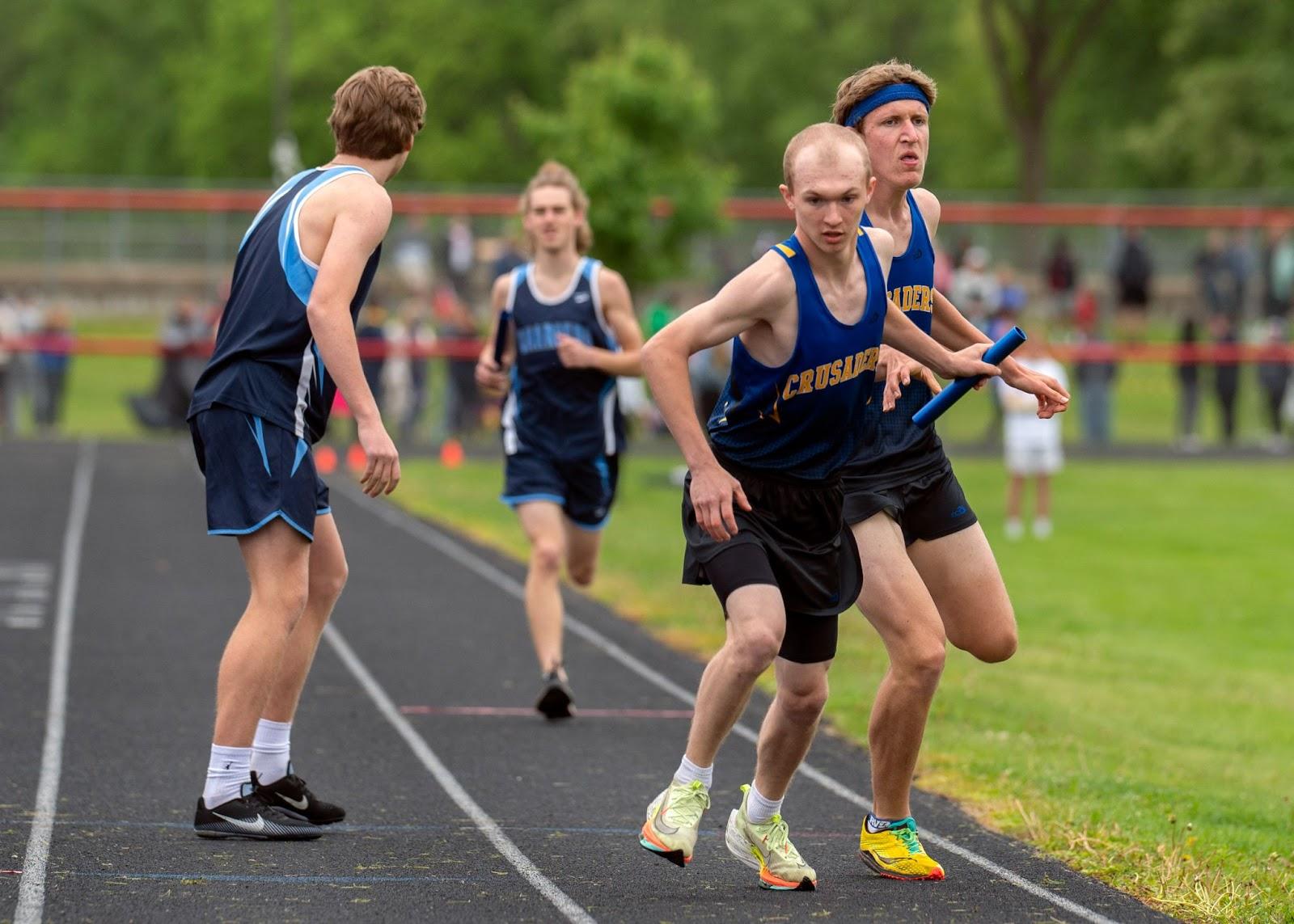 Gavin Selly takes a handoff in the 4x800. 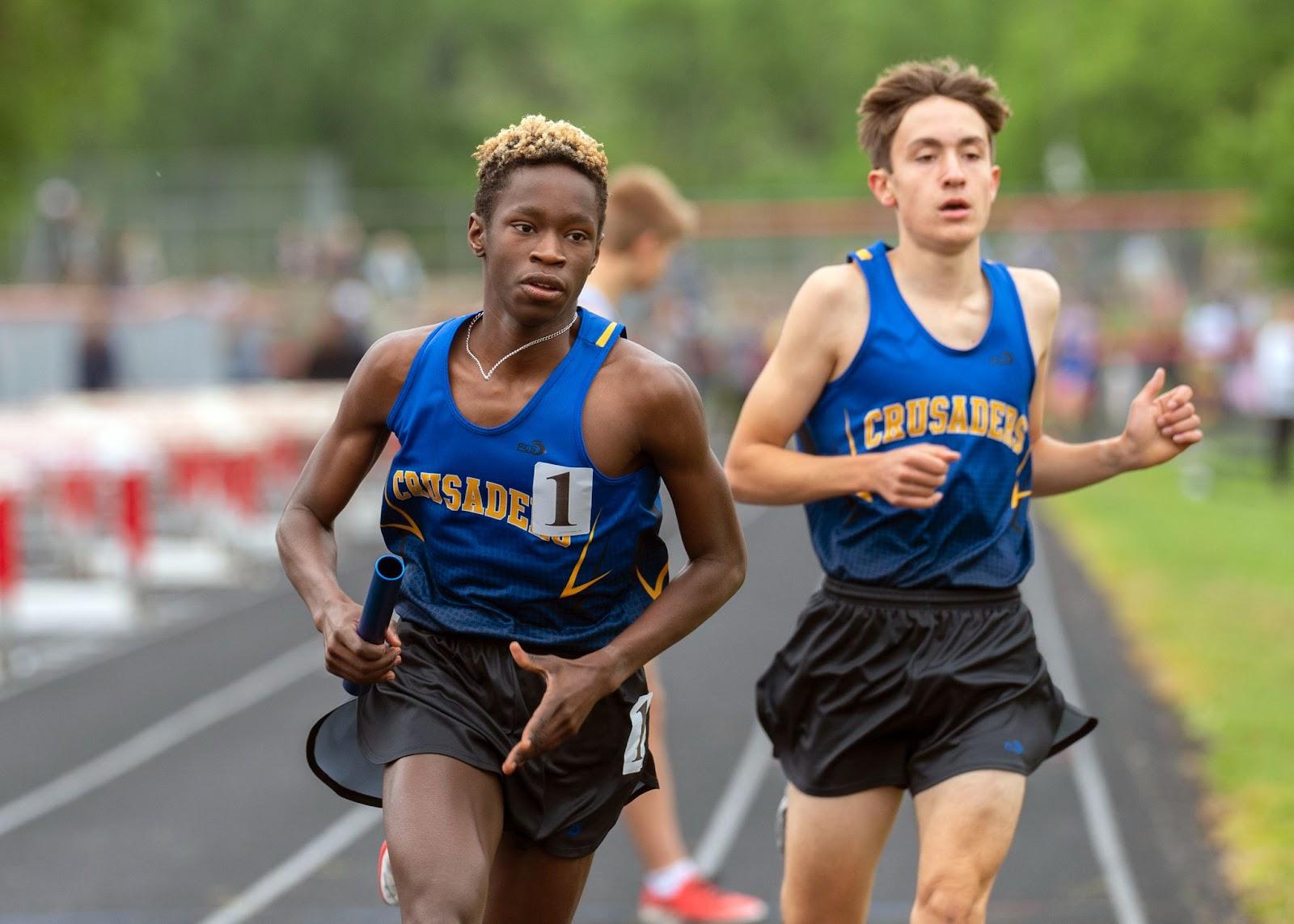 Nathan Strobel turns a corner in the 4x800. 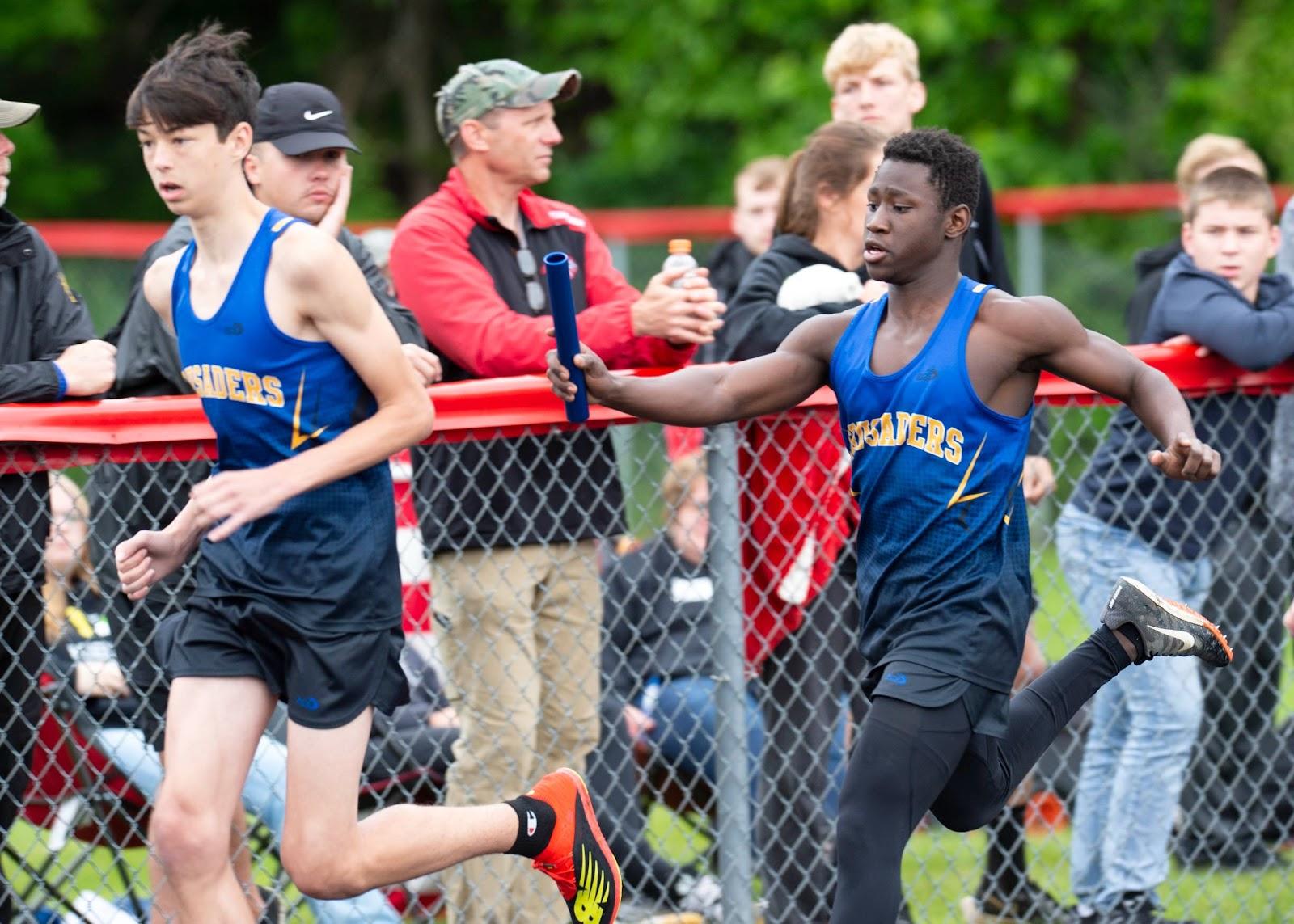 Henry Strobel ran the first leg of the 4x200. 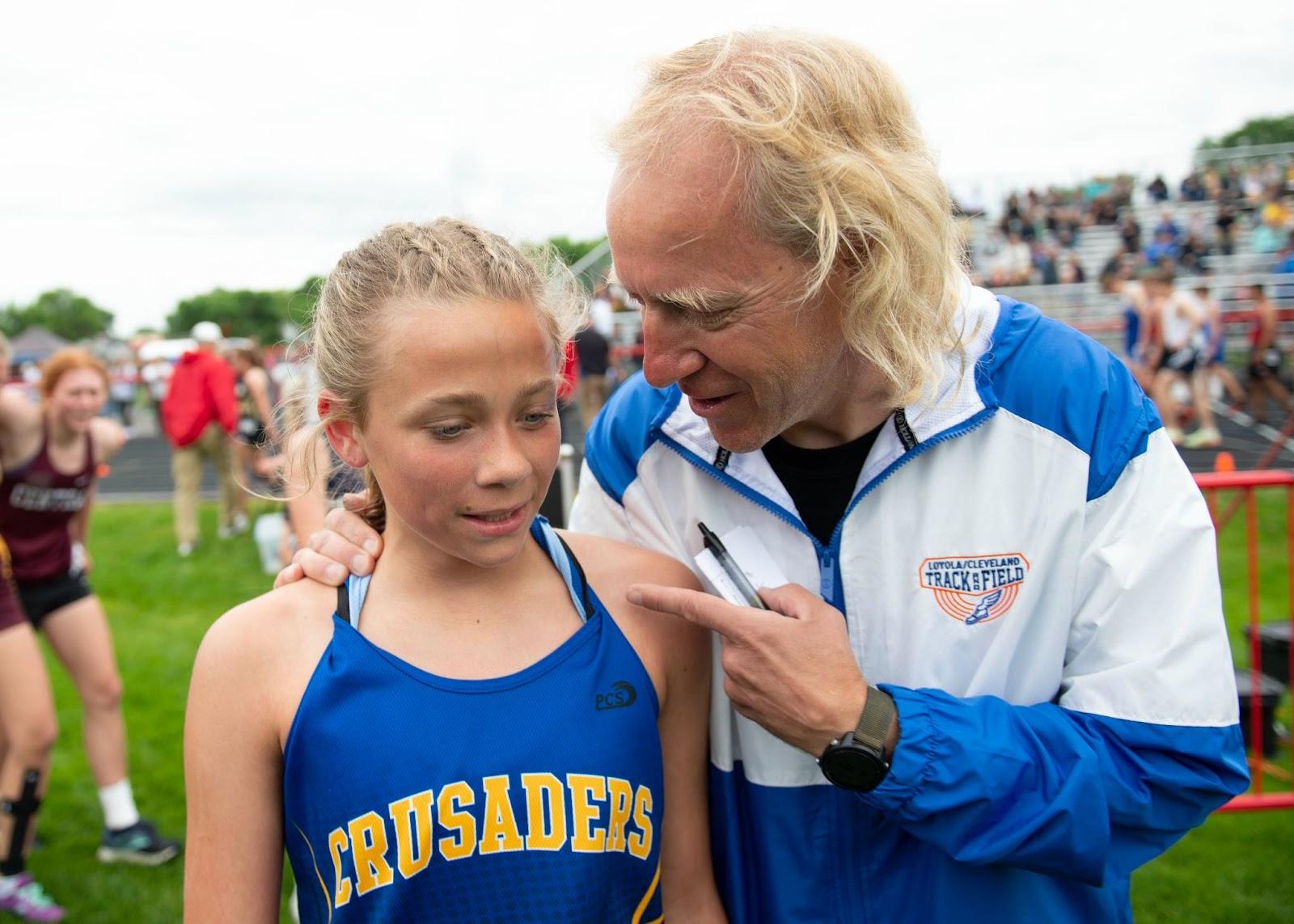 Head coach Dale Compton congratulates Savannah Meyer after she took second in the 1600. 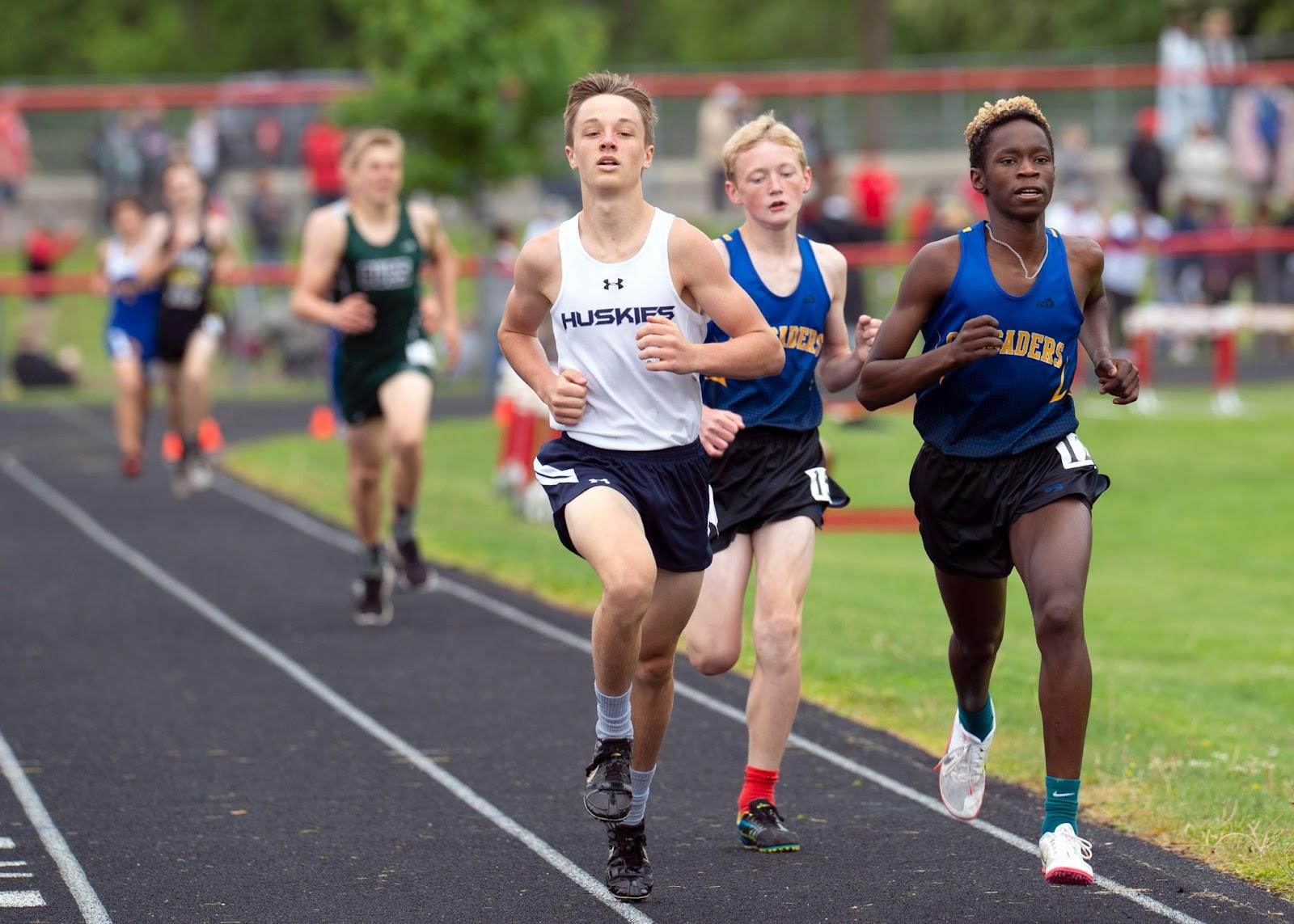 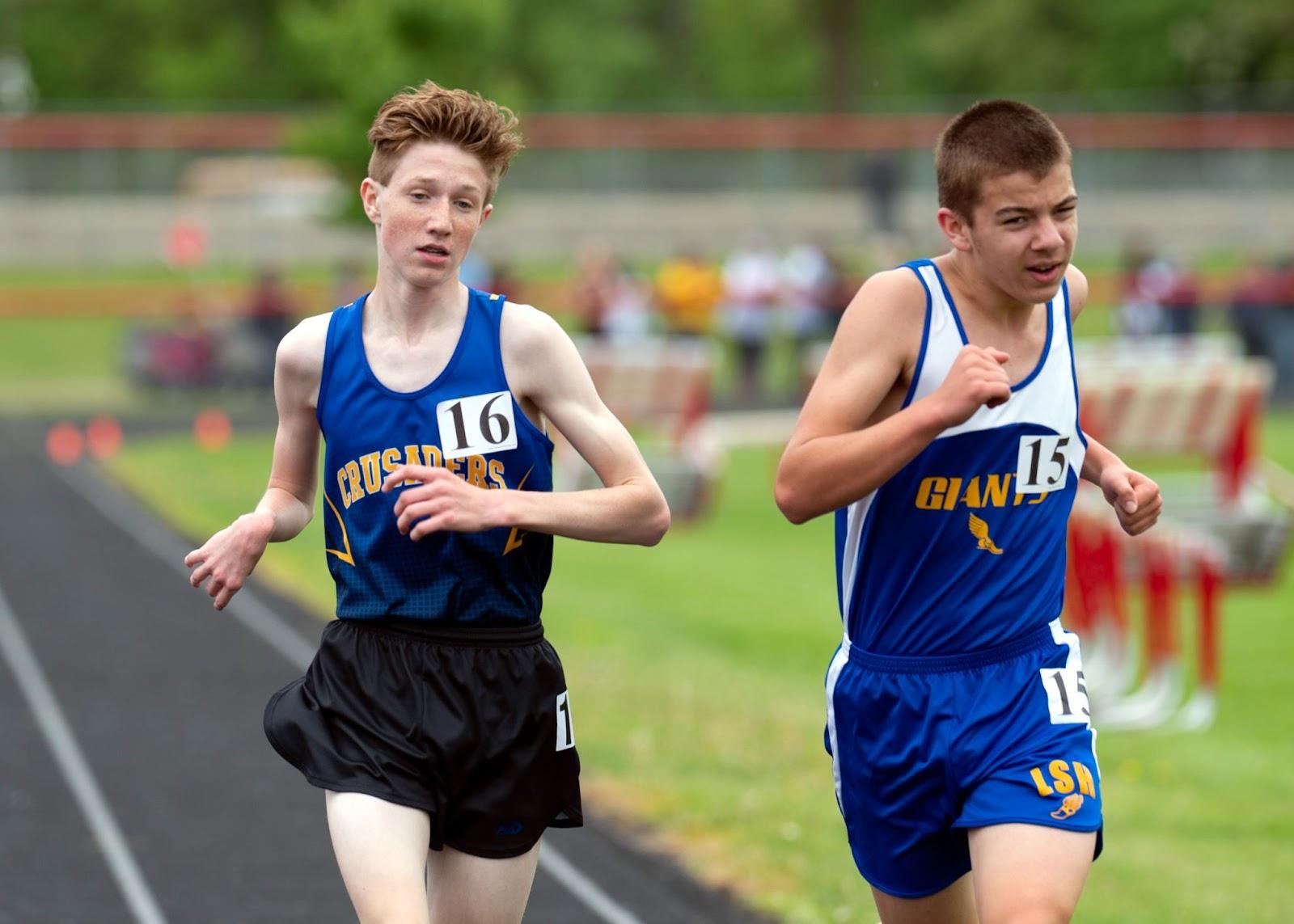 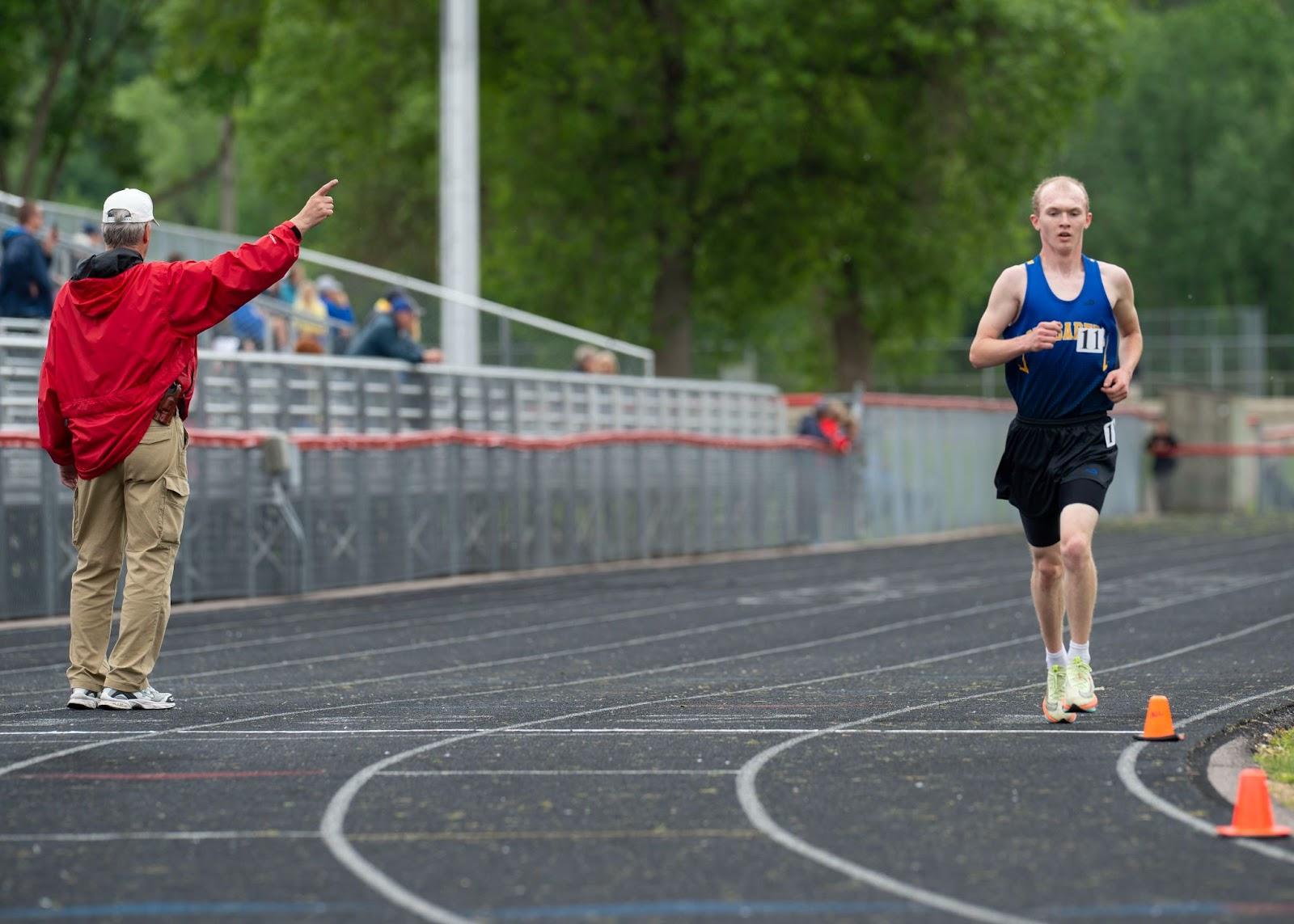 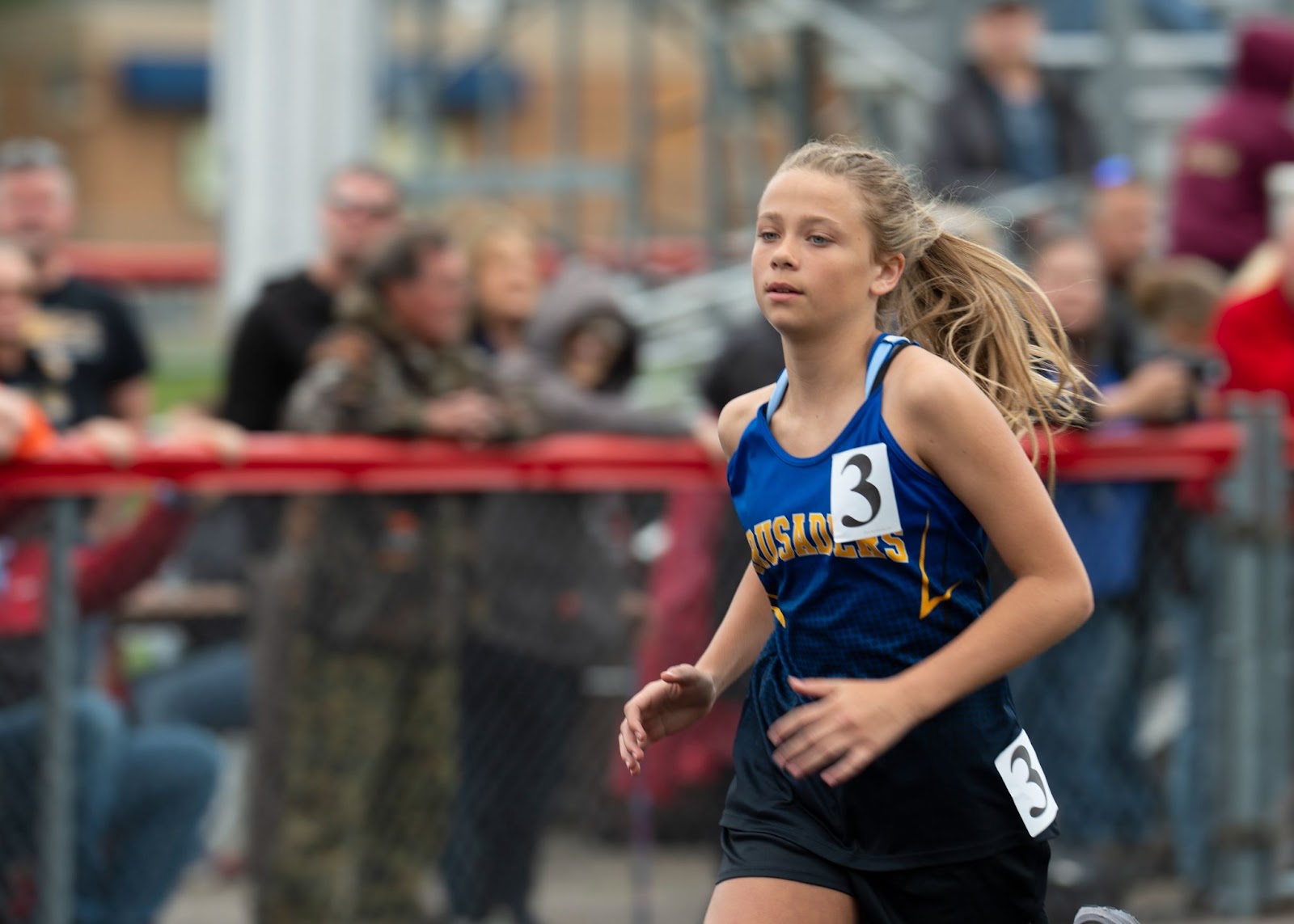