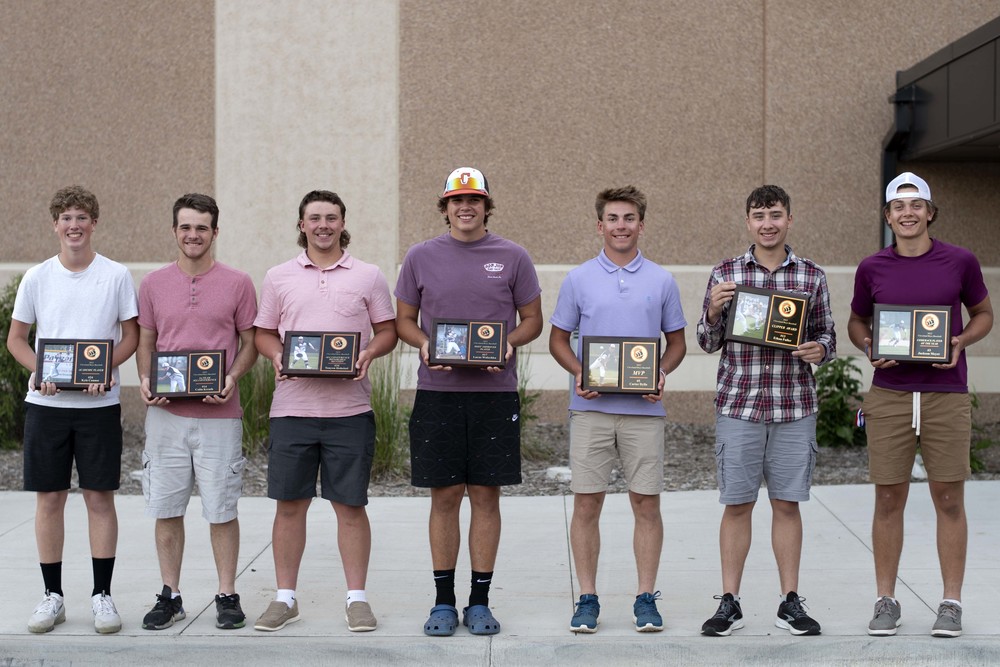 Led by six seniors, the 2022 baseball season will be remembered for its ups and downs.

“There was lots of excitement going in but heart-breaking losses,” said head coach Mike Krenik. “But it was good to see them smiling after not so productive seasons in the winter and fall.”

The Clippers reflected on their efforts during the baseball awards banquet, which was held in the school commons on June 27.

Seniors Colin Krenik and Carter Dylla were chosen by area coaches as members of the All-Valley Conference first team and also named by section coaches to the All-Section team.

Dylla was the team’s ace pitcher, lead-off hitter and shortstop. Along with Lucas Walechka and Jackson Meyer, he was one of the team captains.

“If there is someone who you want to count on to get the last out you need to get, it’s Carter,” Krenik said. “He had great leadership skills. He gets up to the mound and has a presence up there and is not afraid to go after batters. He had trouble getting his first hit of the year, but you knew it was going to come, and he came on like gangbusters at the end of the year with the bat.”

Krenik played outfield, first base and pitched and was the second batter in the Clipper lineup.

“Colin had a great year,” Krenik said. “He was an animal at the plate. He came in on the mound and kept batters off balance with a great curve ball and great changeup. He is a very smart pitcher.”

Dylla was also voted on by his teammates as the team’s Most Valuable Player and the Defensive Player of the Year.

“It came down “who do you want to have the ball in your hands when it comes to the last out of the game.” Krenik said. “If there is one thing I preach all the time is the best pitch is a strike. When he got on the mound, you put the ball in his glove and it’s like ‘let’s go.’”

Dylla batted .366 and had a team-best slugging percentage (total number of bases per at-bat) of .577. Tops in extra bases, he five triples and five doubles. He also collected 16 RBIs.

Krenik was voted by the Clippers as the Offensive Player of the Year. His .373 batting average was the team’s best. He had an on-base percentage of .481, and his slugging and on-base combined percentage was .881. He had 16 RBIs, 14 walks and 16 stolen bases.

“He was very much the Mr. Clutch,” Krenik said. “He was a great person to have in the second in the lineup, moving guys over, knowing the situation.”

Chosen for the All-Conference second team were Walechka and Meyer.

Walechka pitched and played first base.

“Lucas is a very good student of the game,” Krenik said. “When he gets on the mound, he looks for details. He was very consistent around the strike zone. He can recognize what he is doing wrong. When he got off, he fought himself right back into the groove. With the bat, he was very good at two-strike hitting in the latter part of the season. He wasn’t afraid to battle. He was a very good leader and picked everyone up when they needed to be.”

Meyer, who came back from a football injury, was the catcher last season but transferred to third base this spring after missing the first few games while still recovering. He was third in the batting lineup and batted .367 and had 21 RBIs.

“Jackson made an amazing comeback after an injury,” Krenik said. “He worked his tail off. I was very nervous if he was going to play at all, but Jackson came through with a great year. Unfortunately, he wasn’t behind the plate like we wanted to be, but he went to the place all good catches go when they are done: third base, and he got some time on the mound. When we were upstairs in the spring, he was our best pitcher. He had incredible fastball at the knees, and he had a good curveball that broke late. And at the plate he was very consistent and held the three spot. When it was time to put it in play, Jackson was there, moving people around.”

Meyer was named by the coaching staff and athletic director as the Comeback Player of the Year.

“We looked at how much they improved offensively and defensively and in the all the statistics you can’t put a finger on, like leadership, and confidence and leading by example,” Krenik said.

Junior Tanyon Hoheisel was an All-Conference Honorable Mention. Hoheisel played infield, outfield, pitched and played first base at times. Batting .302, he was one of six Clippers who hit over .300, and he hit with power, Krenik said.

“He has very good strength to bat. When we’re on offense, we’re looking to get people around and score runs, and Tanyon has done quite a bit of that. I just know he will be a good pitcher next year too. The cogs will slip together, and it will be effortless.”

Senior Ethan Fuller, a DH and outfielder, was voted to take home the Clipper Award.

“The Clipper award is for someone who embraces the spirt of the school and the team, is selfless and all the things that we want to see in a student athlete that makes us proud to want to call him a Clipper,” Krenik said. “Ethan embodies that. He’s the type of guy who puts the extra work in and asks what he needs to do to improve. He would us a lot of games off the field. He is the guy who sparked everything.”

Freshman Kyle Connor earned the Academic Award for maintaining a 4.0 GPA during the season. It was a new award this year.

“I thought it was very important that we praise the student athlete,” Krenik said. “Having that academic involvement is very important. Being a well-rounded person is huge.”

An outfielder, Connor was one of three freshman who had significant playing time.

“He is a nice left-handed batter for the lineup,” Krenik said. “He has a sweet swing. We will work more with him in contact situations, but he is a very good bunter. He is another guy who we can bring up on the mound next year. He has a good strong arm and is a smart ball player with good mechanics.

Besides the award winners, most players earned letters.

“KT was asked to do a lot of things this year: outfield, infield,” Krenik said. “He is a very good athlete and made a huge improvement from last year. He could get to the opposite field with power, get clutch hits. He brought a lot of energy to the game and to the team.”

“The one thing I saw as an improvement in Gabe was his strength of his arm,” Krenik said. “He is a good student of the game. There are certain instincts a baseball player has. Gabe directs traffic and knows the situations, which is a great thing as a catcher. I look for good things from him next year, and we will probably see him on the mound.”

A utility player, sophomore Alex Garcia played outfield and different spots on the infield and was a designated hitter.

“He has a strong arm,” Krenik said. “If we put it in the right direction, we will be doing fine. He is a good athlete, and I expect a lot from him next year.”

Freshman Blake Lyons switched between second base and third base and was typically a starter.

“He is another pitcher for next year,” Krenik said. “We will work on the bat for next year. Has a good strong arm and good baseball knowledge and good confidence as a freshman. It will be a delight to see him the next three years.”

Freshman Kale Kelley also saw a lot of playing time. From centerfield to second base, he filled in on defense where he could and was also a designated hitter.

“As a freshman that’s a lot of confidence to swing the bat,” Krenik said. “He made good contact. We will get him on the mound as well.”

“He’s another guy who will get out there and be fearful of nothing,” Krenik said. “The difference in seeing him as a freshman to now is huge. When we have long pitching sessions, he’s up there and says ‘Yeah coach. I’ve got another one in me.’ When he is in the cage, he is going to make contact. He never gives up and is working on his skills all the time.”

Sophomore Brady Bostic was a utility player who was mostly in the outfield and pitched at times.

“When he starts to get his mechanics in motion, he is a good pitcher,” Krenik said. “I look forward to him being a starter for us next year. He is a good listener and always tries to improve.”

“It’s fun having him around,” Krenik said. “I don’t have to tell Derek anything a second time. He’s developed himself into a lot better player than he was last year. He has a lot of drive, a lot of enthusiasm. I think next year he has the potential to have even a stronger arm and be quicker with the bat, and I am grateful to have him.”

Freshman Blake Gibbs will be another left-handed pitcher next year.

“He is another guy who likes to pay attention to see what he can do to improve and works well with underclassman and knows where to be and knows the situation,” Krenik said. “I look forward to good things from him next year.”

“He had a rough start, taking a pitch to the head early in the practice season but bounced right back,” Krenik said.  “I know we have another good pitcher here. He is another good student of the game and pays attention all the time. He was always on the railing cheering everyone on.”

“He had lots of questions, which is good,” Krenik said. “One of the great things from Dennis was he was the last guy to leave the field. It’s great to see that.”

Carter Barto, a sophomore, was injured all season but still helped with the team.

Seniors with a GPA of 3.5 or higher during the season earned an Academic All-Conference award. They included Fuller, Dylla, Meyer, Krenik and Walechka.

Facing solid programs and with only one outside practice before their fourth game, the Clippers got off to a 3-1 start but quickly hit their stride, tied for second in the conference and finished the season respectable 11-11 record, the best for boys varsity teams in a year where injuries set the tone in football and basketball.

The Clippers’ season ended when a 4-run rally fell short, and they lost 7-6 to Mankato Loyola in the third round of the sections.

Krenik concluded the banquet by expressing his gratitude to all who made the program a success.

He thanked players and parents. He thanked the coaching staff: Jeff Skinner and Charlie Haugan for the junior high, Greg Berry, Dave Cink and Alec Rogers for varsity and junior varsity.

He expressed his gratitude to the school board for allowing the Clippers to use the new gym when they were stuck inside. He thanked Athletic Director Rich Kern for organizing the schedule and taking care of the field.

He thanked his friend Nadine Holland for preparing the banquet meal and for announcing home games. He thanked parent Patty Sullivan and this author for media coverage. 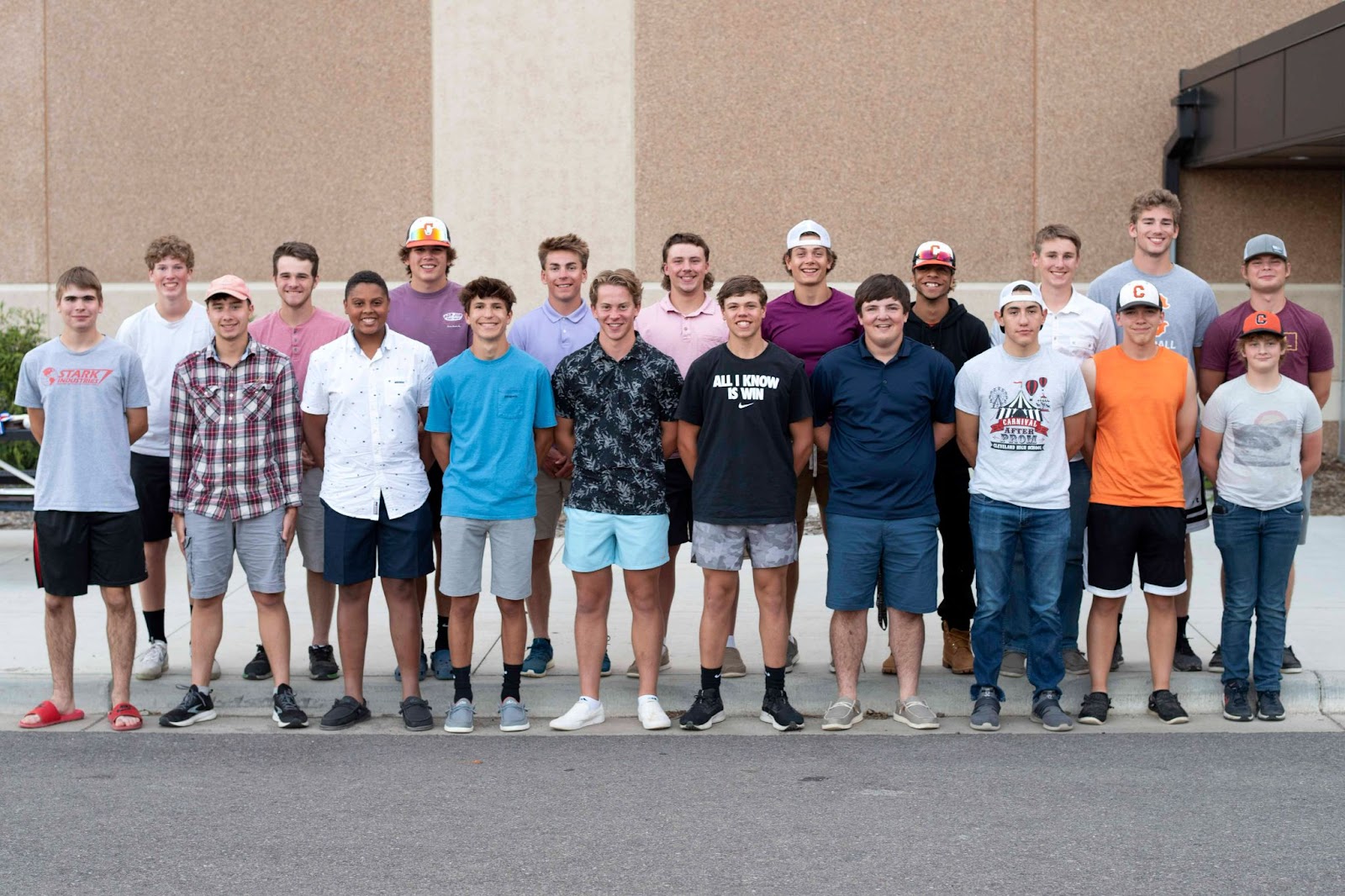 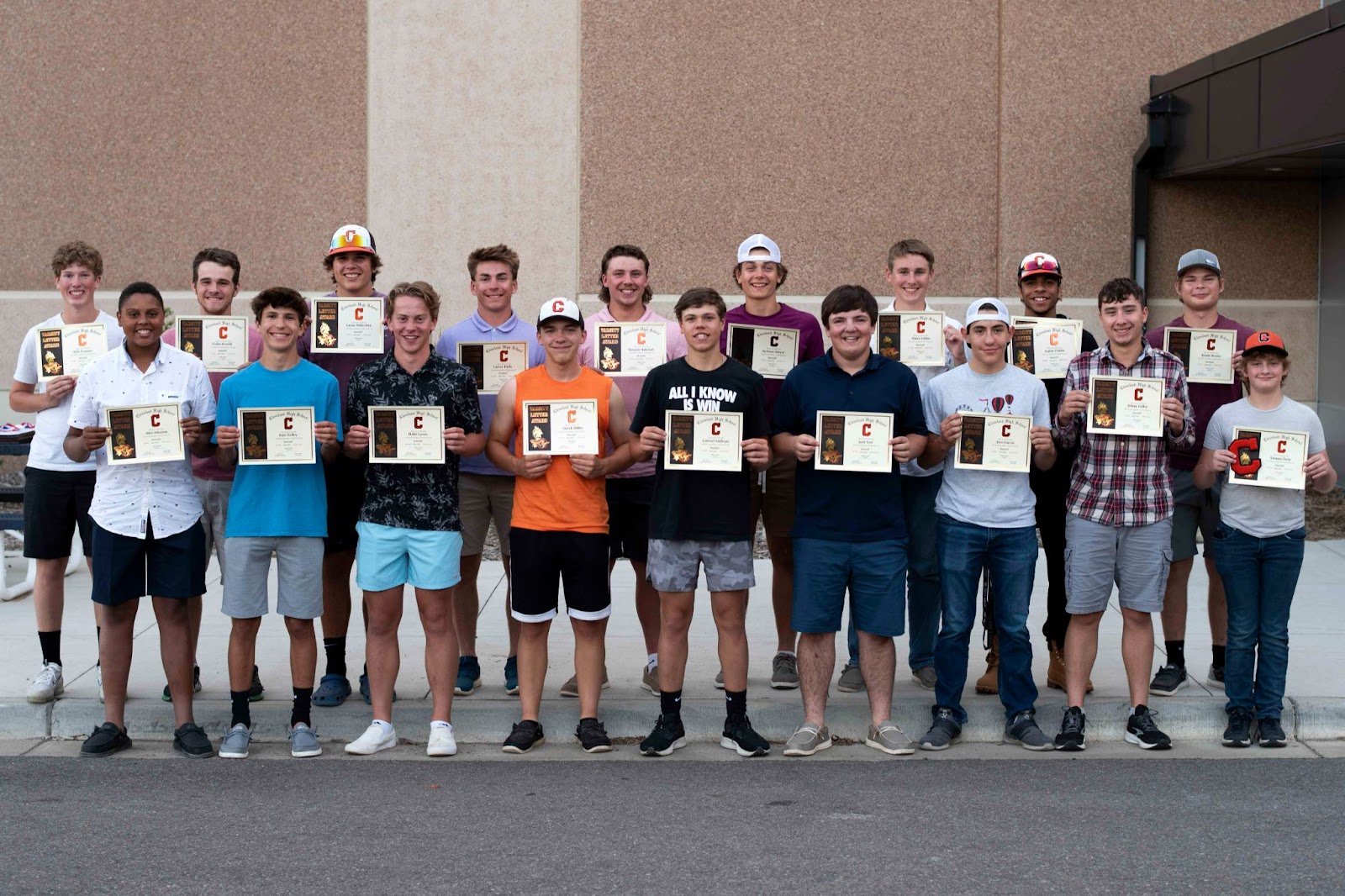 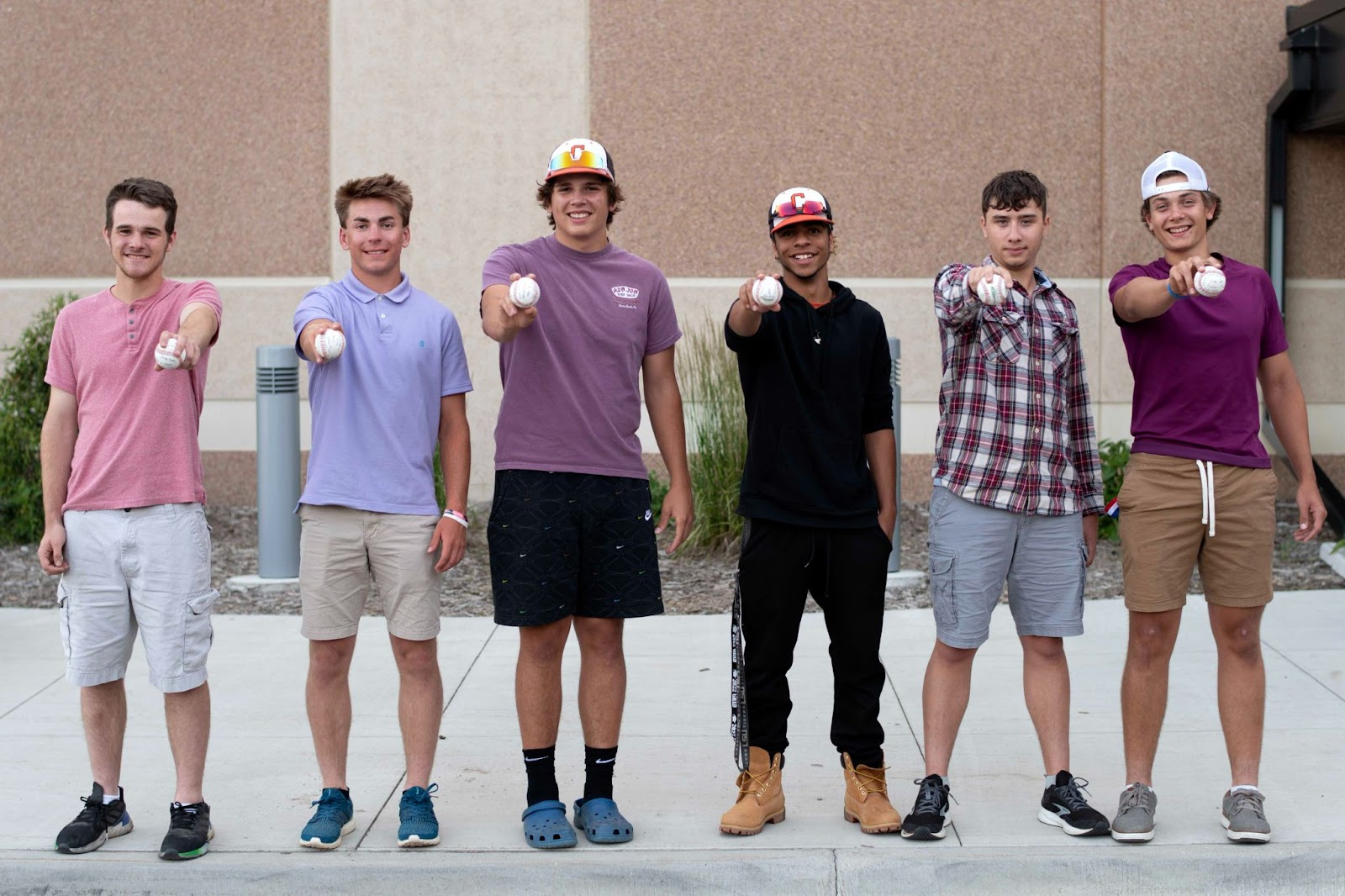 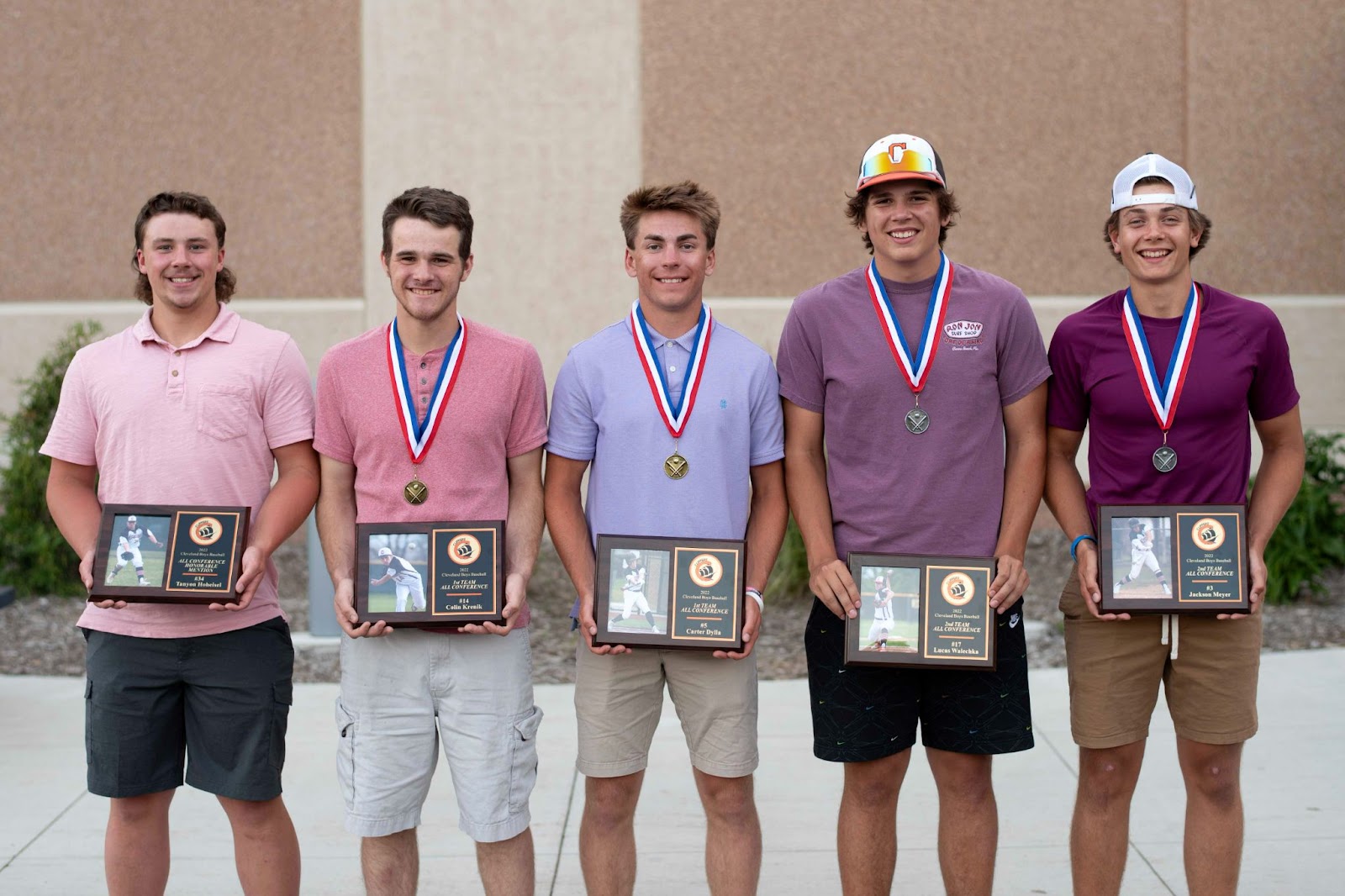 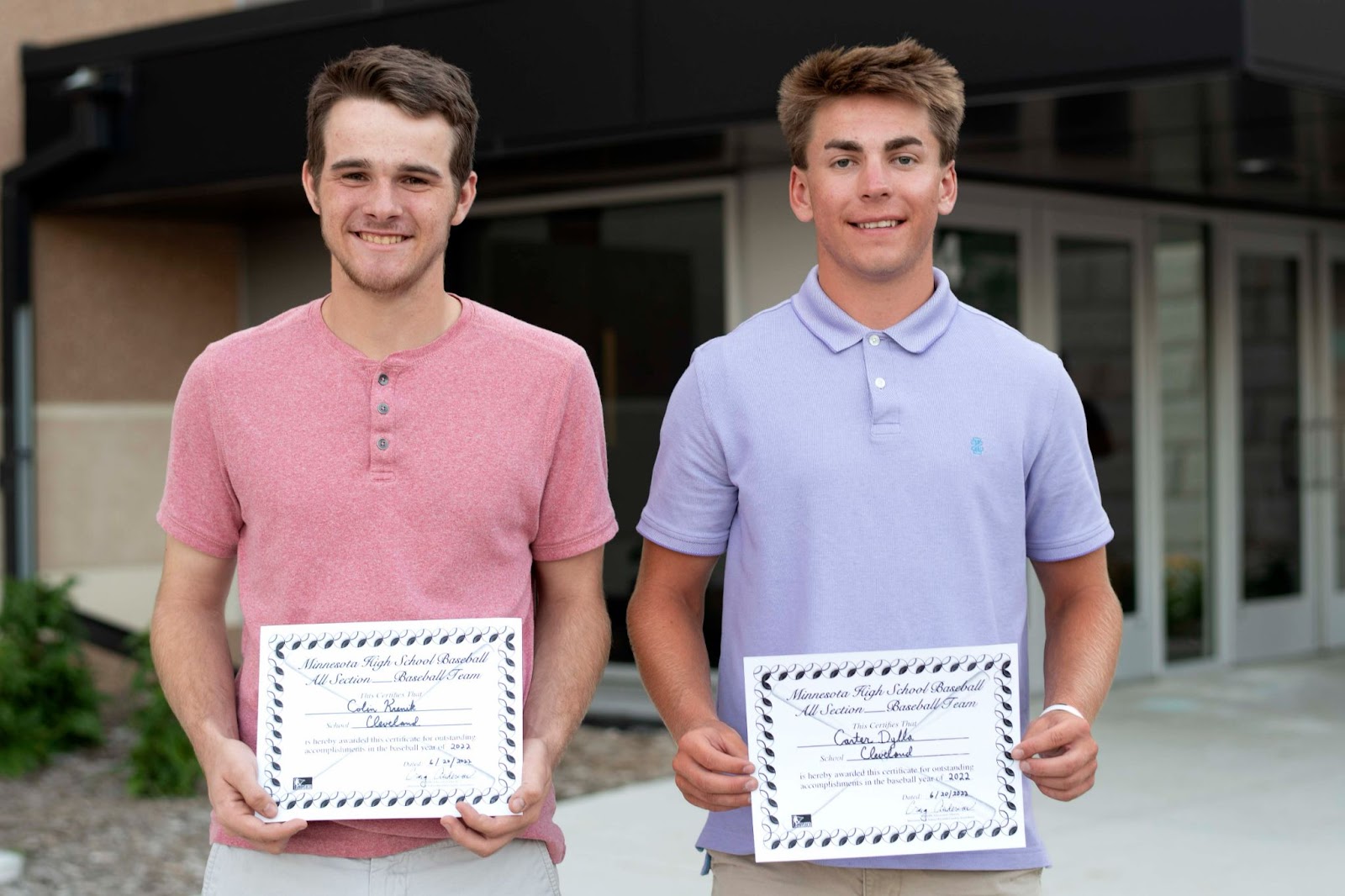 Colin Krenik and Carter Dylla were named to the All-Section team.