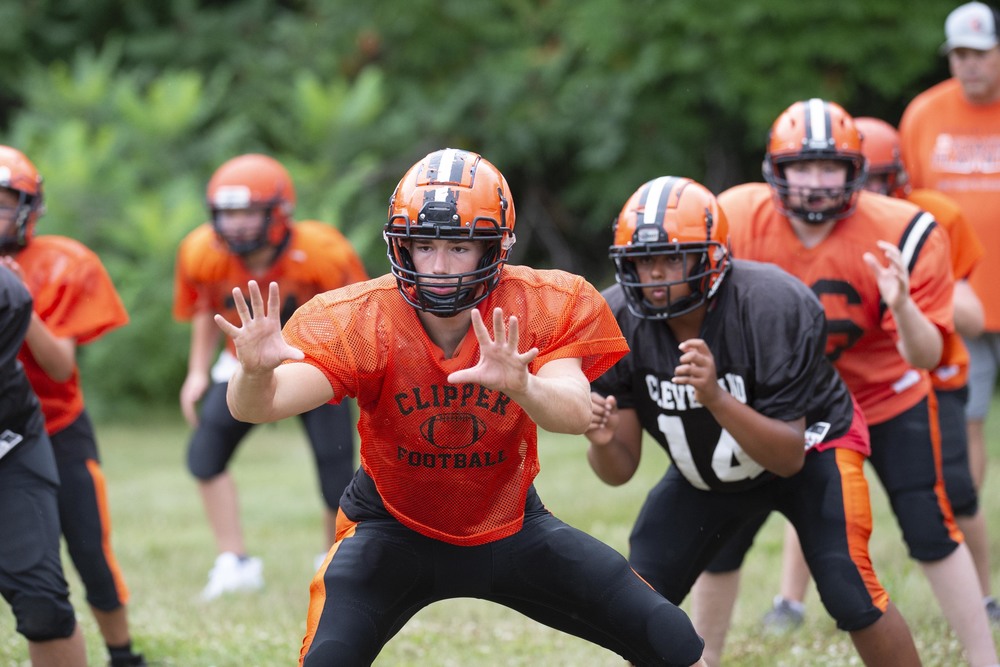 The week before and the week after, the heat index soared into the 90s, but for the five days of the summer football camp, held July 25-29, temperatures were comfortable, and the entire camp was held at the varsity football field for the first time in many years.

“Recently, with school construction and bad weather, we have been at the baseball field and in various gyms,” said head coach Erik Hermanson. “This is the first time ever that the weather allowed us to be in full pads for the entire week. Also, having multiple coaches and great player numbers gave us unlimited options for drills and scrimmages.”

Attending the camp, which ran from 6:30 pm to 8:30 pm, were 48 athletes going into grades 7-12. They worked on the fundamentals of blocking, tackling, throwing, catching, running and conditioning.

“Our goal is to teach our players the correct techniques and practice habits that will allow them to reach their full potential and to be successful,” Hermanson said.  "But most of all we want to show them that playing football and being part of a team is fun. Whether the athlete was an seasoned player or just starting football, our program is an experience that they will remember for a lifetime.”

The Clippers lost a dozen seniors from 2021 and brought back only a handful of juniors, so to say 2022 will be a rebuilding year is an understatement. Staying healthy and adding players will be paramount, Hermanson said.

“Every player who goes out for football this year will be a key to our success. Eleven-man football is a numbers game, and we need everyone who enjoys football to be on the team."

But the Clippers matriculated a group of now ninth graders, who came off an undefeated junior high program last season.

“The Clipper youth movement is our biggest strength and really exciting,” Hermanson said.

Another strength for the team is there will be multiple players from Immanuel Lutheran, and Hermanson hopes to continue to cultivate a relationship with the Mankato parochial school, which has contributed some talented athletes in the past.

“We are excited to have them.”

The first practice is August 15 at 7 am. Until then, players should condition, lift, work on ball skills and recruit friends to join the team, Hermanson said. 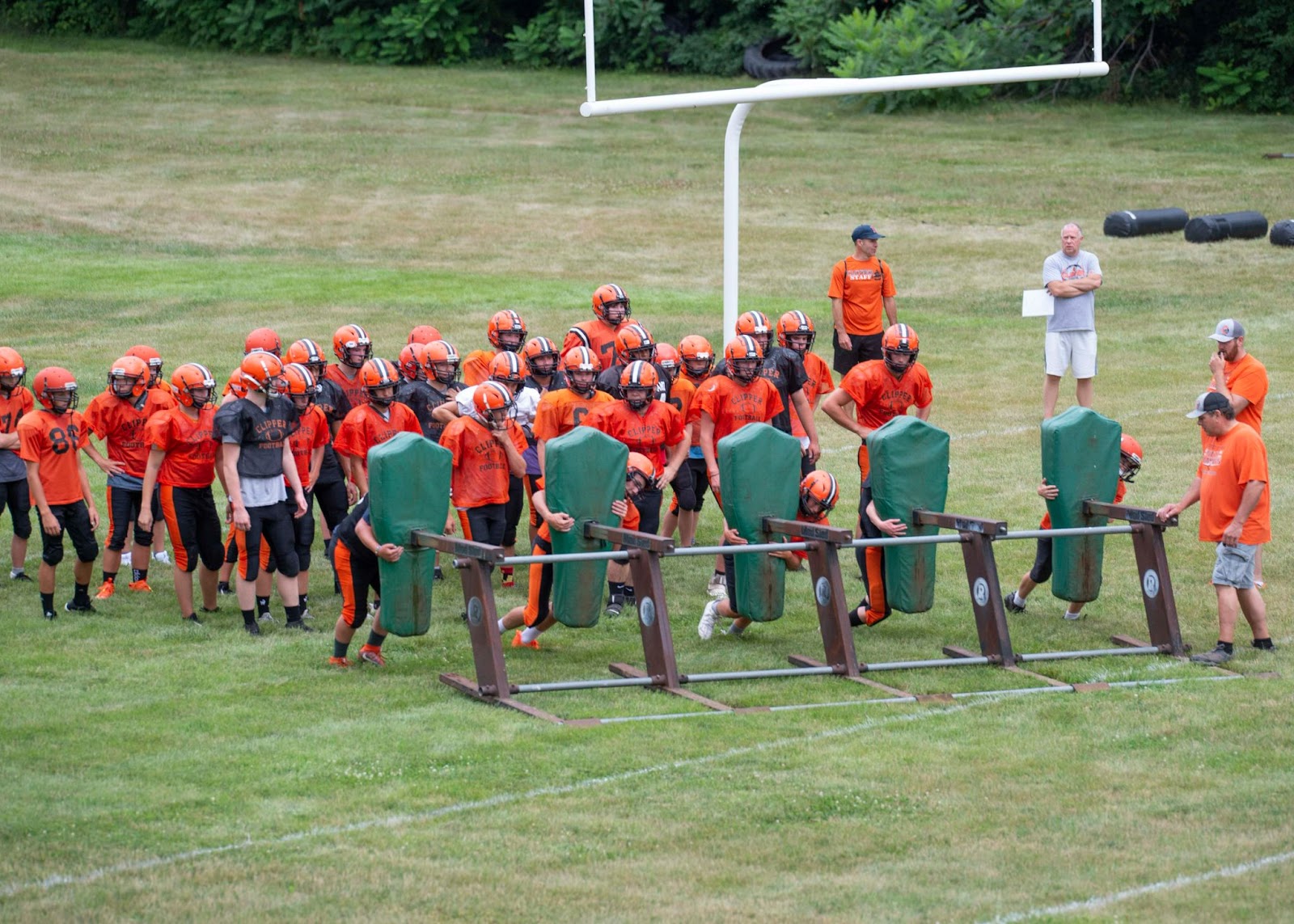 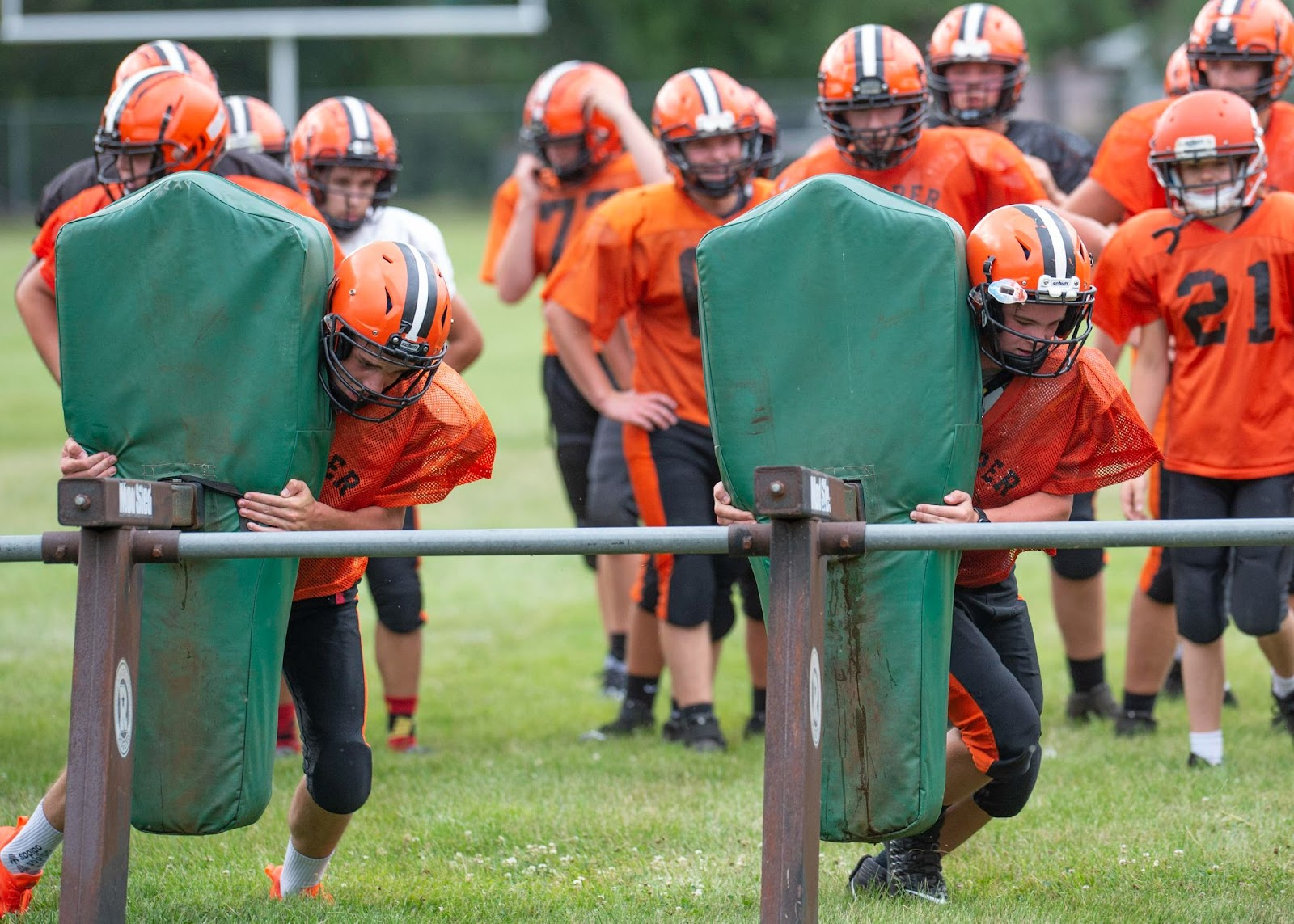 A pair of Clippers hit the blocking sled. 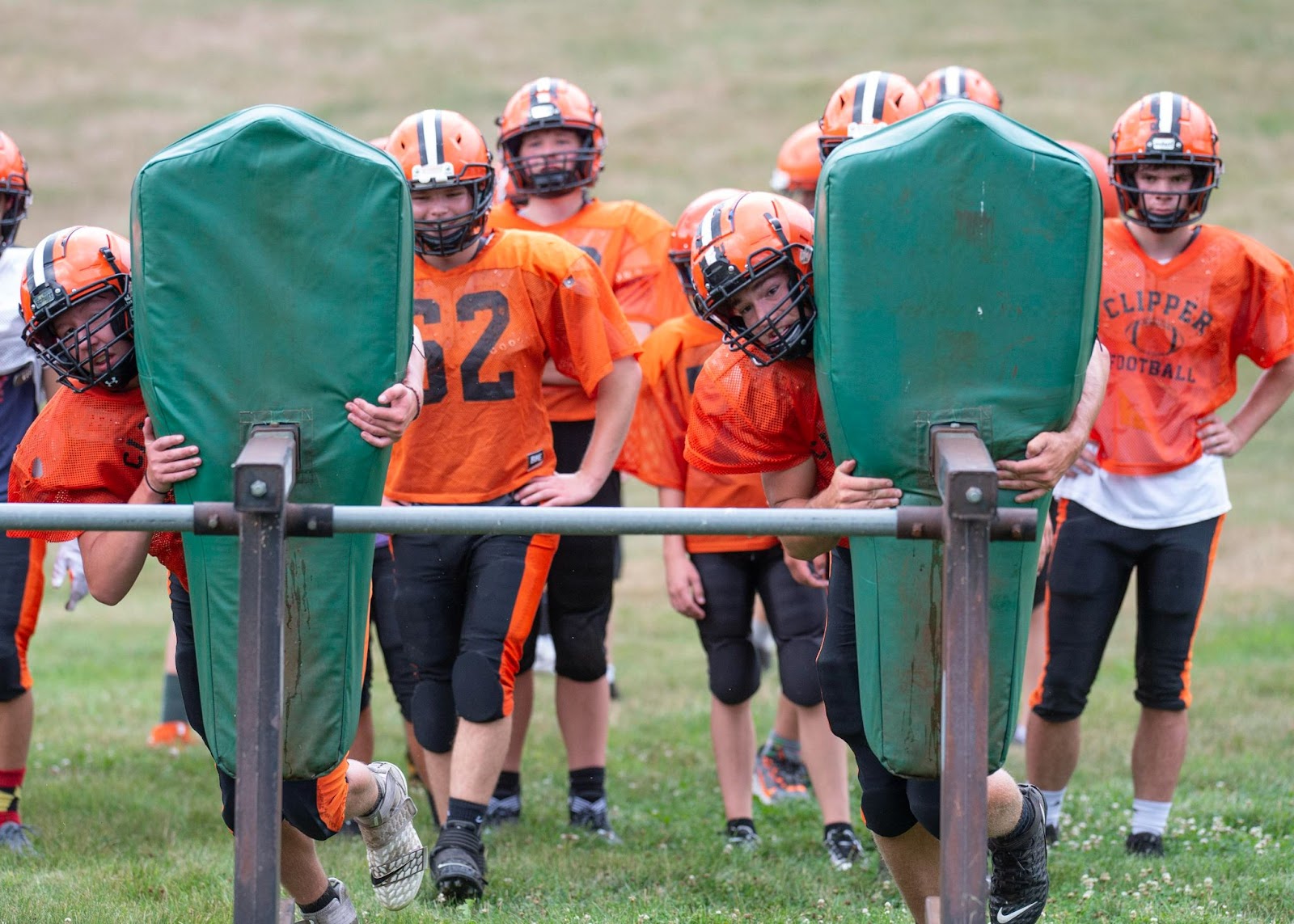 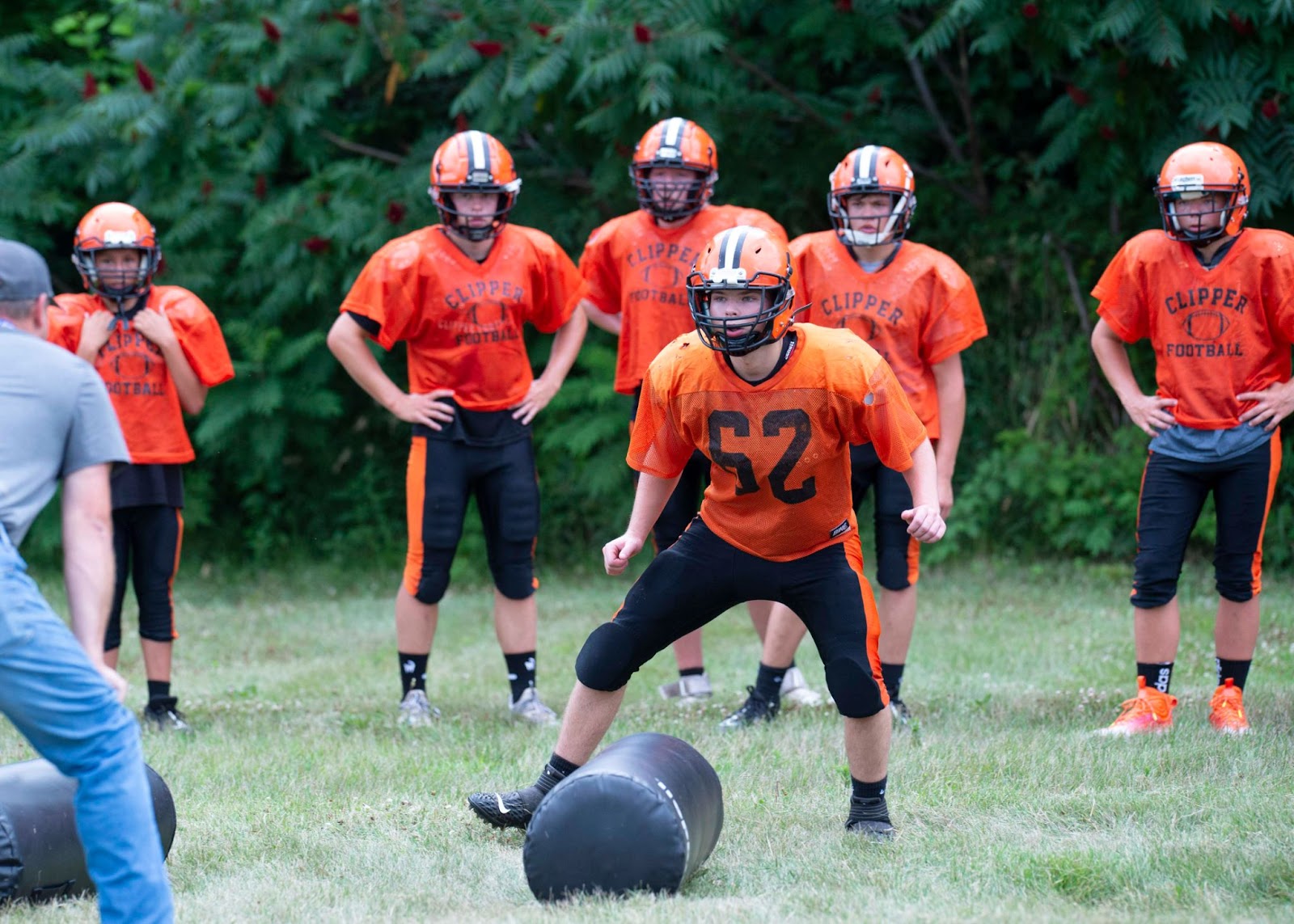 Brady Hahn works with Brady Bostic on a tackling drill. 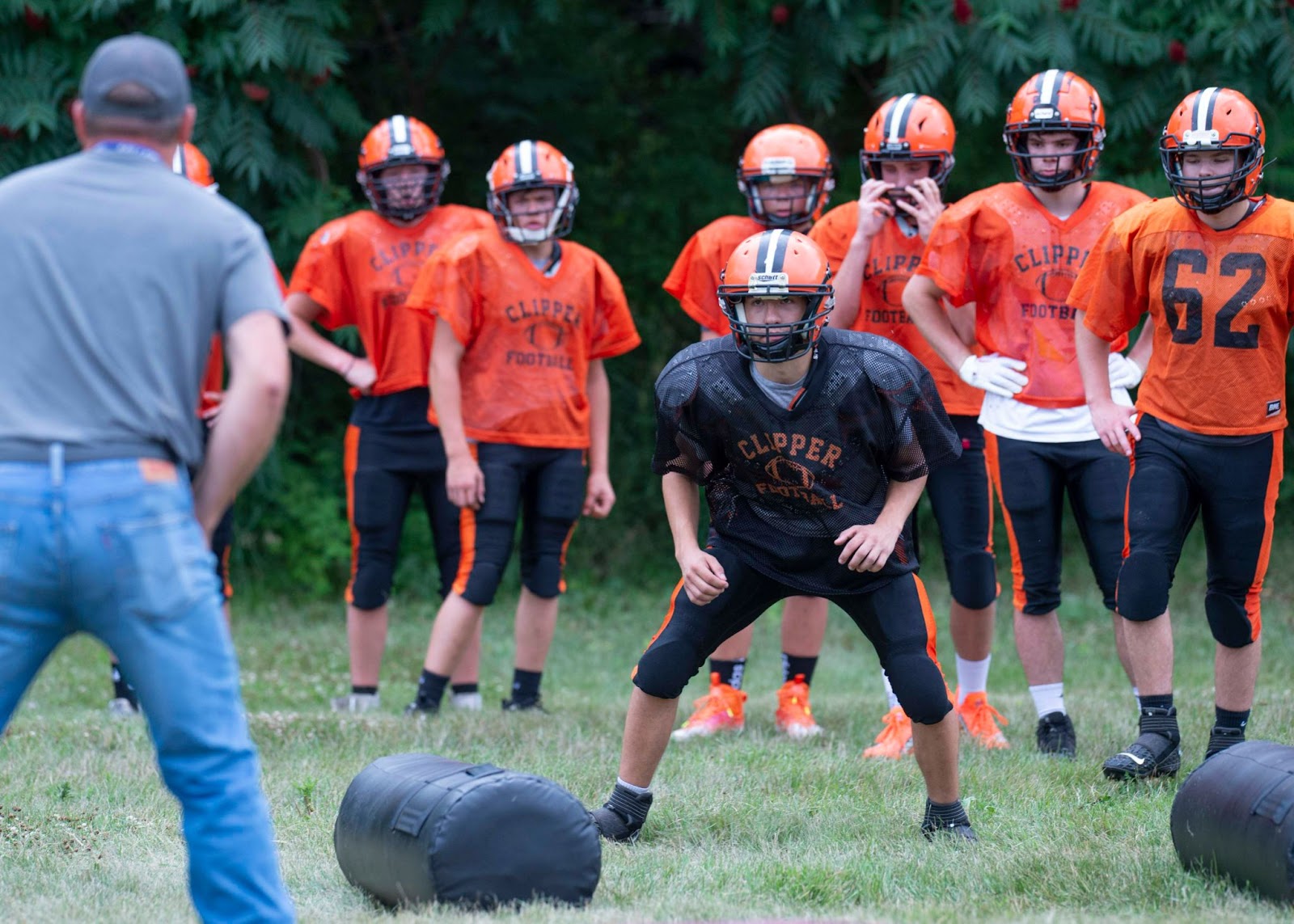 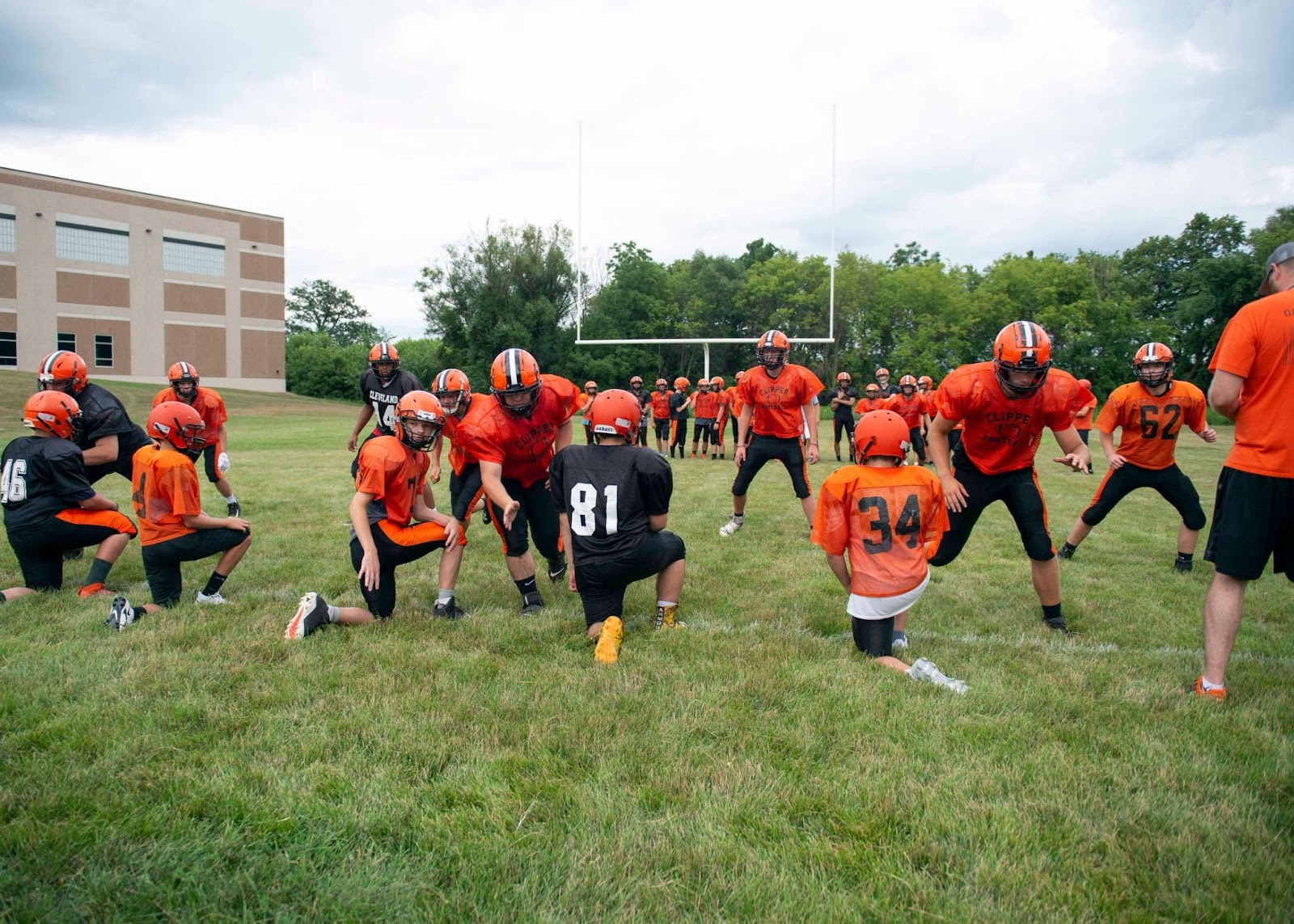 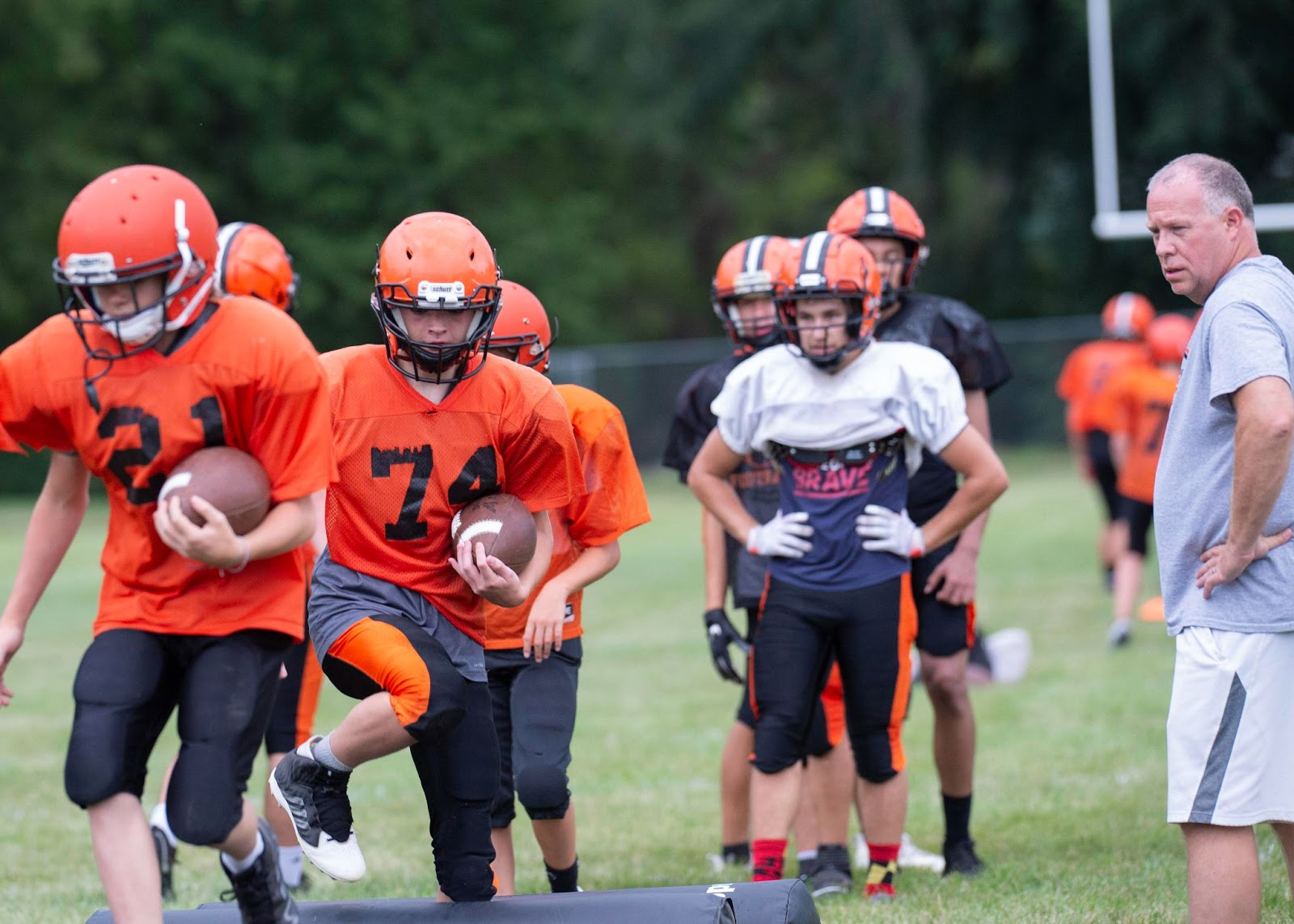 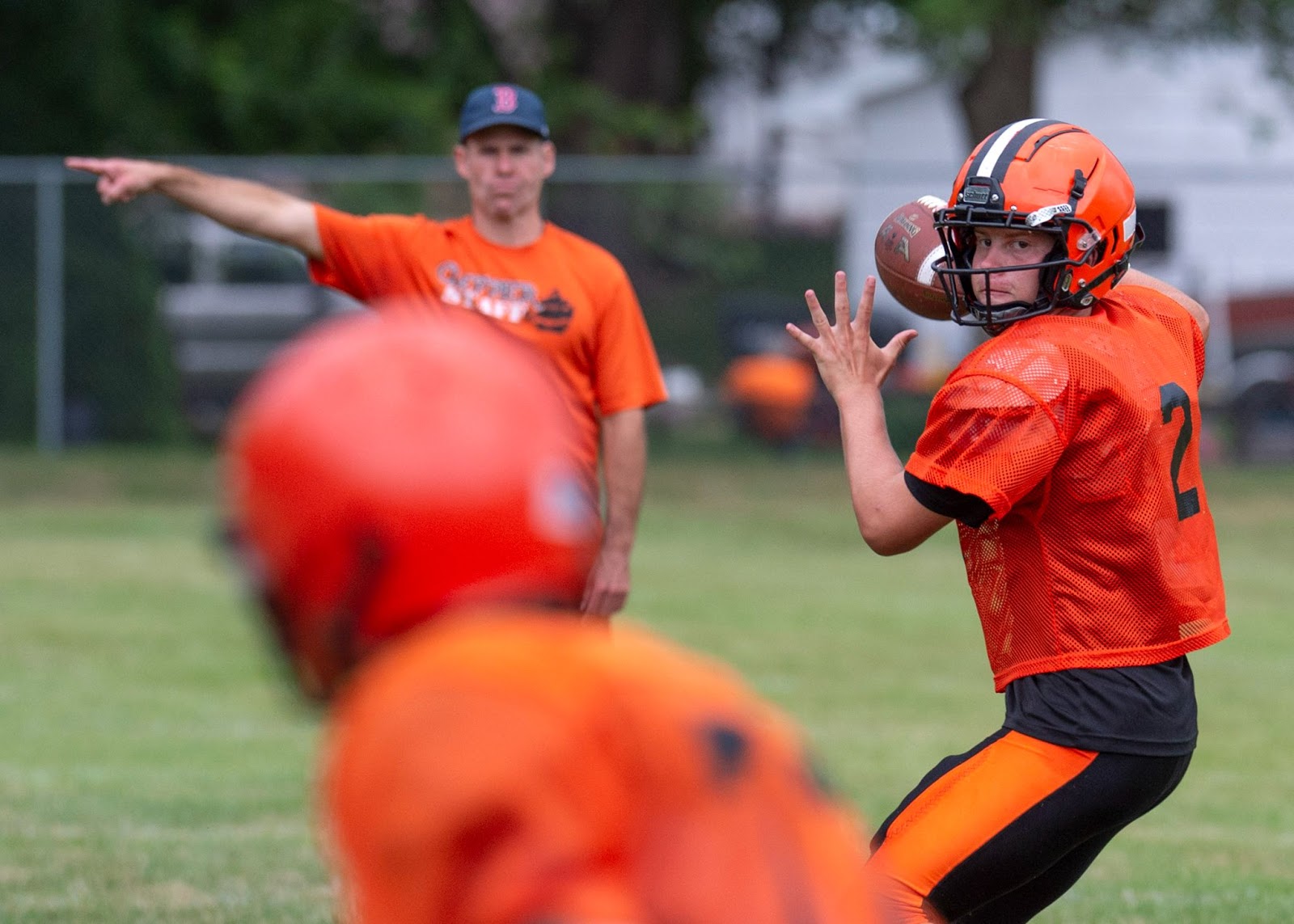 Blake Lyons coils for a throw during a passing drill. 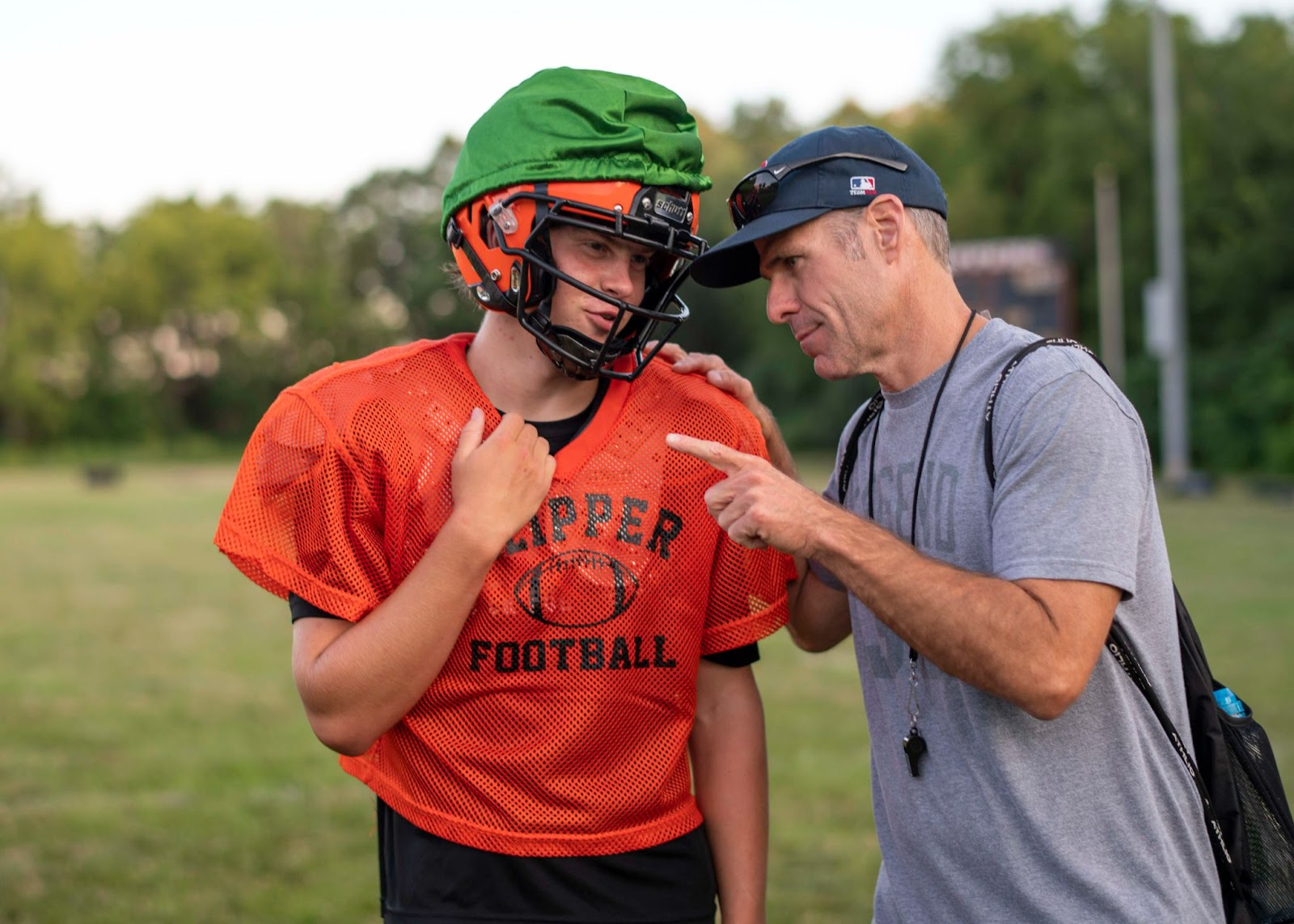 Erik Hermanson instructs quarterback Blake Lyons during offensive drills. Last year, as a freshman, Lyons was thrust into the quarterback slot after Jackson Meyer was injured. This year, Lyons comes back stronger, quicker and experienced. 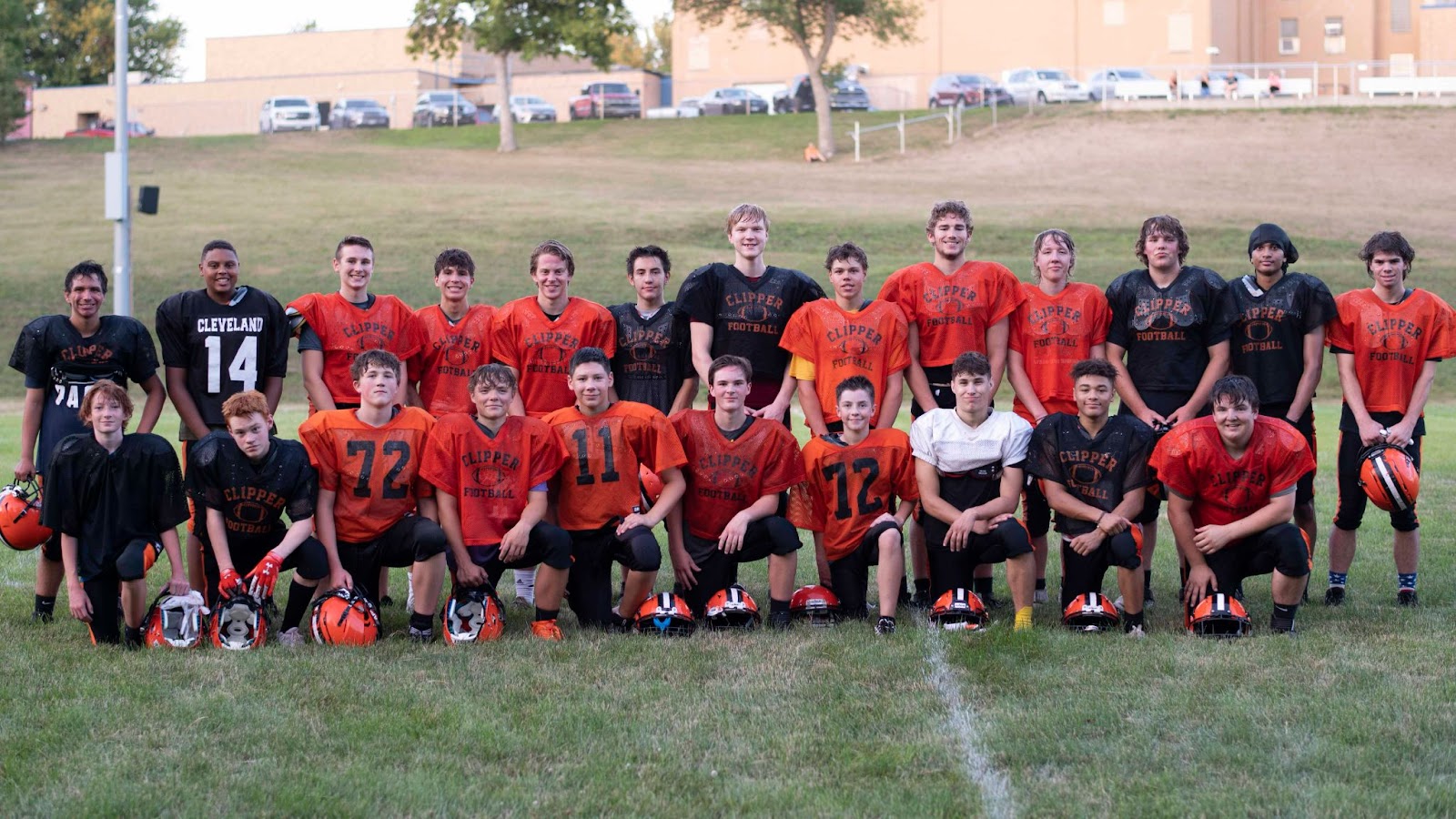 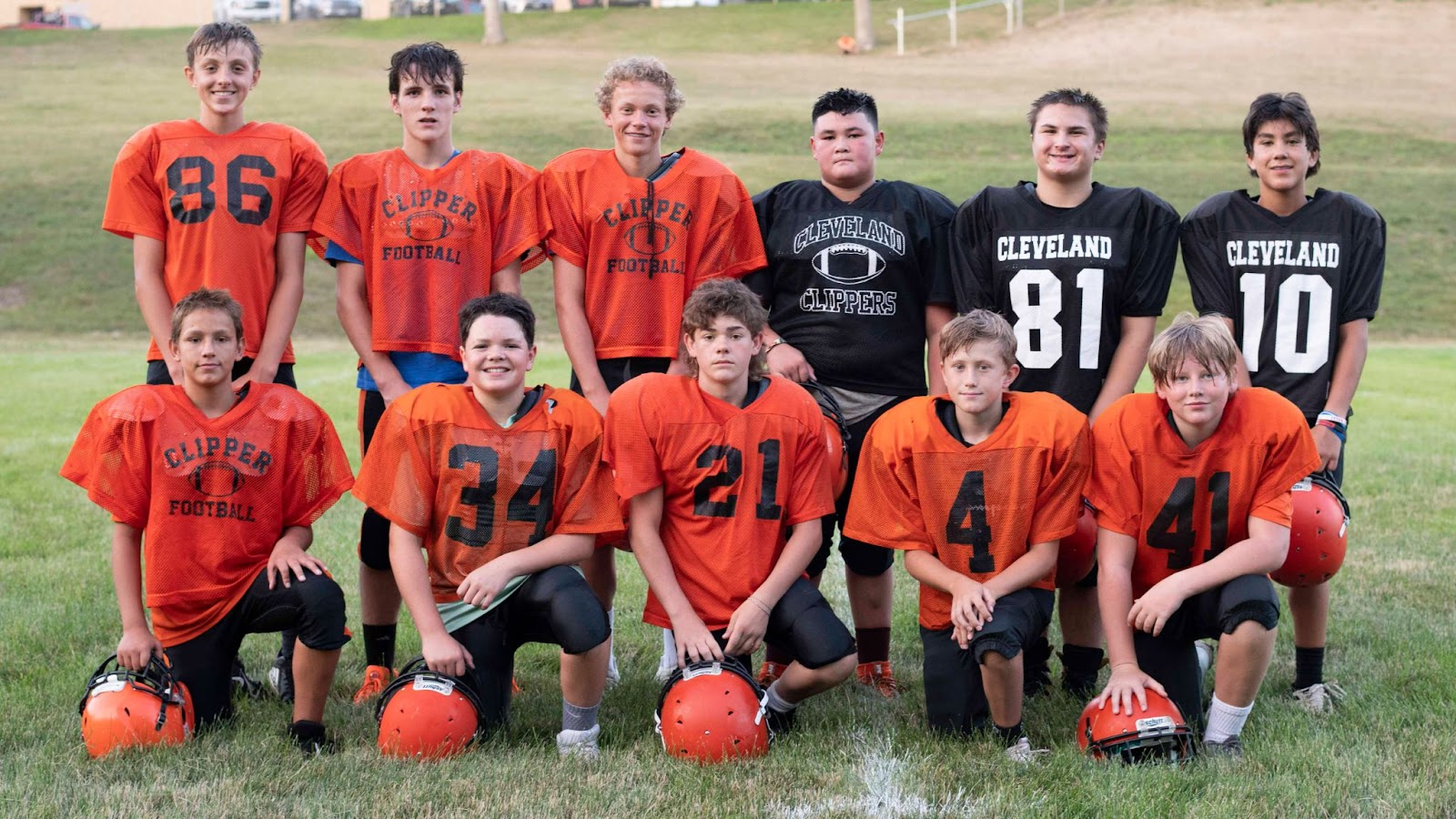