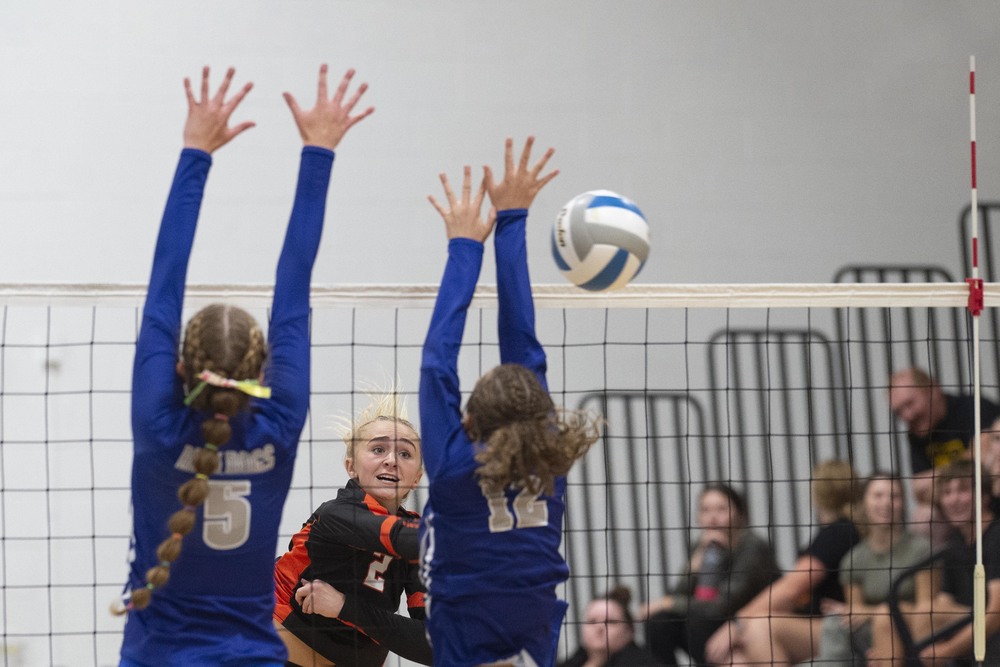 Varsity girls bounce back for win in Janesville

Bouncing back after a season-opening loss at home, the varsity girls earned a 3-0 sweep over non-conference Janesville-Waldorf-Pemberton in Janesville on Tuesday.

While the first half of the match was unsettled, the Clippers found their mojo early in game two and never glanced backwards.

“It was a rough start for us as a team,” said head coach Dave Nixon. “We had seven or eight errors and two serving errors. They had 13 points and we helped them score eight or nine of them.”

The match began with a couple of Clipper hits that didn’t clear the net. A Harley Connor kill was their first point. Ava Hahn (above) added a kill and an ace tip, but the Clippers found themselves behind 11-5.

From there, Laci Hollerich slammed down a winner, and Greta Hahn tipped in a point. After a Connor block, an Ava Hahn Kill and a Lexi Waldron ace tip for three-straight points, the Clippers pulled within two, 13-11.

On an Ava Hahn attack, the Clippers knotted the score at 16. Sarena Remiger followed with a kill to put the Clippers in front for the first time.

“We took a time out and talked about it," Nixon said. “We focused on bettering the ball, making better decisions and stop scoring points for them, and the girls responded.”

The Bulldogs took a 20-19 lead after the Clippers let a tip descend to the floor and then hit the ball into the net, but Hollerich and Connor each dropped in two kills for a four-point Clipper spurt that put them up front 23-20.

The Bulldogs scored the next three points for a tie, but Hollerich took a Greta Hahn handoff and spiked it down for a winner and a 24-23 Cleveland advantage.

The game tied again when the Clippers hit the ball into the net. Highly contested, the next point went to the Clippers when a Bulldog contacted the net after an Ava Hahn hit, but the score entwined at 25 after a JWP ace tip.

“JWP was very scrappy, so they dug up a lot of our stuff,” Nixon said. “They competed really well and made it hard on our hitters. Their crowd was great, too. It was very loud in here, so it was hard to hear each other.”

From there, it got down to serving. While the Bulldogs’ attempt sailed into the net, Connor’s caromed off the hands of a Bulldog for an ace and a 27-25 Clipper triumph.

Game two see-sawed until the Clipper went on a four-point run to go up 9-6. Finding their rhythm, they never lost the lead from there. After kills from Connor and Hollerich and a Savannah Meyer ace tip, they pulled ahead 19-10.

Ava Hahn’s kill was the last winner for the Clippers, and the game ended 25-18 when the Bulldogs airmailed a serve into the net.

“Ava struggled early on in the match but did a great job bouncing back in sets two and three,” Nixon said. “She did exactly what we needed her to do. With a good player like that, sometimes you need a breather, and refocus and reset, and she did a great job.”

The Clippers had a slight deficit early in game three but, in a team effort, dominated after the halfway point. After five-straight Orange & Black points, the game ended 25-14 when eighth grader Melia Sathoff, in her first varsity outing, got a hand up at the net for an “aggressive block.”

“We controlled the second and third sets most of the time,” Nixon said. “JWP was on the defensive where they didn’t get into their offense as much, so when we were clicking they were scrambling a lot of times.”

With 32 set assists, Greta Hahn supported most of the hitting. Connor had three set assists, and Sweere put up two.

Among the building committee, Hollerich, Connor and Sweere each put up two blocks. Ava Hahn had one block.

Leading the serving staff, Greta Hahn was successful in 19 of 19 attempts with two of them aces. Meyer was perfect in her nine serves with a pair of them winners. Waldron landed in bounds 10 of her dozen serves. Ava Hahn dished up three ace serves. Connor forwarded two ace serves.

Nixon said the loss to NUC and the adversity early at Janesville will help the program, and the Clippers will springboard off the win.

“It’s easy to be excited and play hard when everything is going your way, but you have to handle struggles, so that later on in the season you know how to handle that, you know how to make adjustments, bounce back and not crumble. Going forward and handling that is big for our conference matches that are coming up.”

In another non-conference matchup on Tuesday, the Clippers take a road trip to Comfrey to take on Mountain Lake Area. 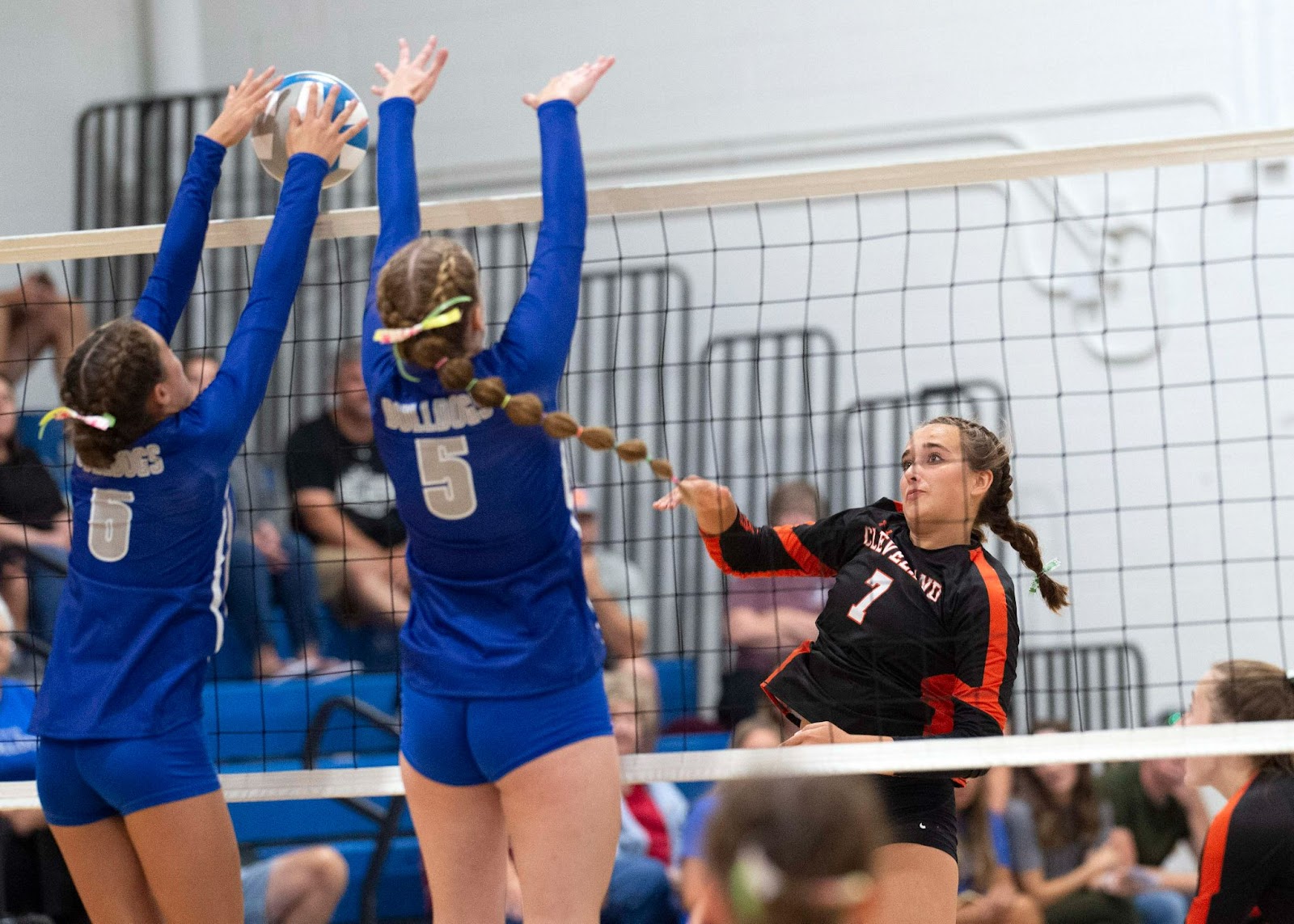 A JWP blocker gets her hands on a Lexi Hollerich hit. 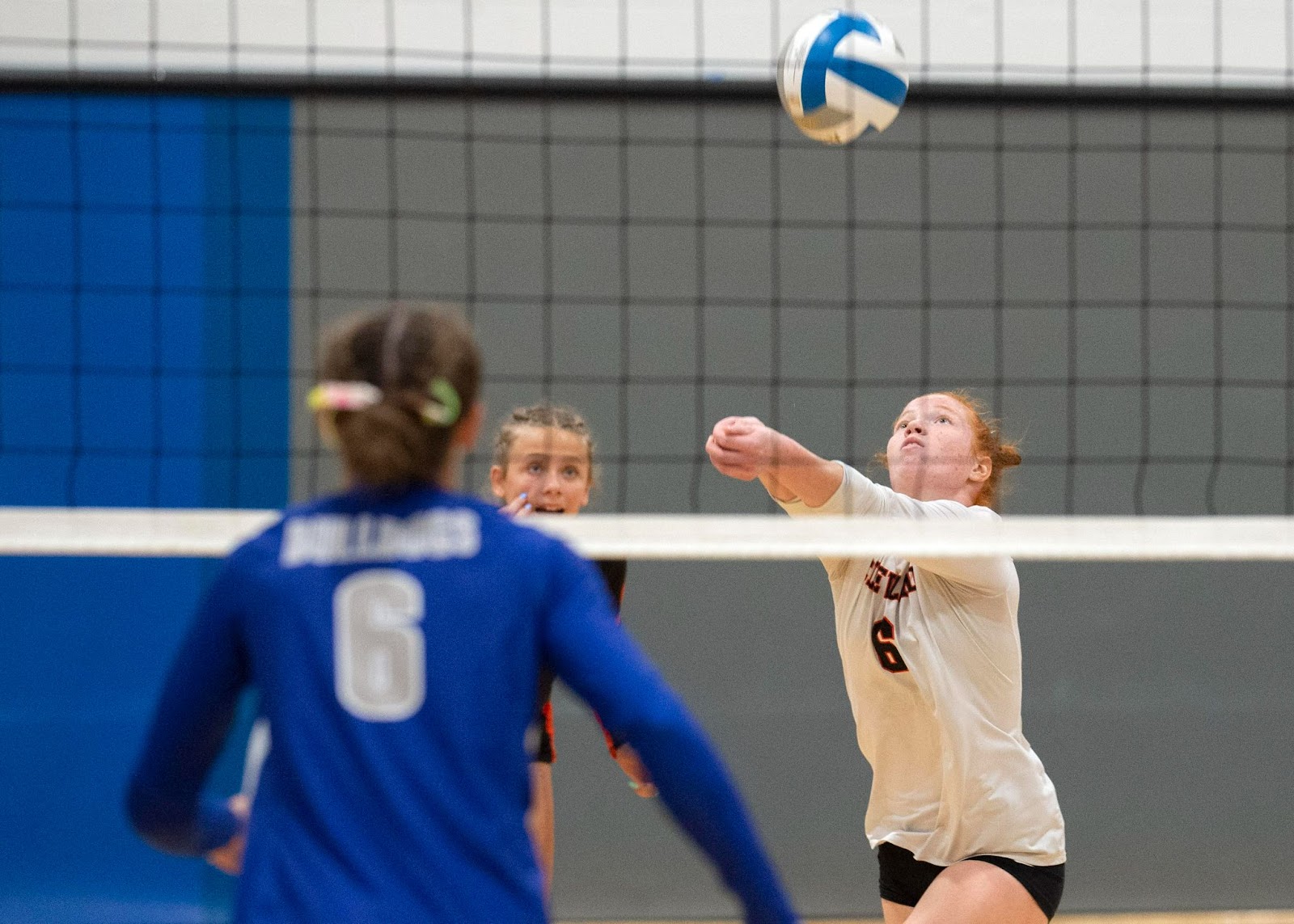 Emma Sweere bumps up a pass. 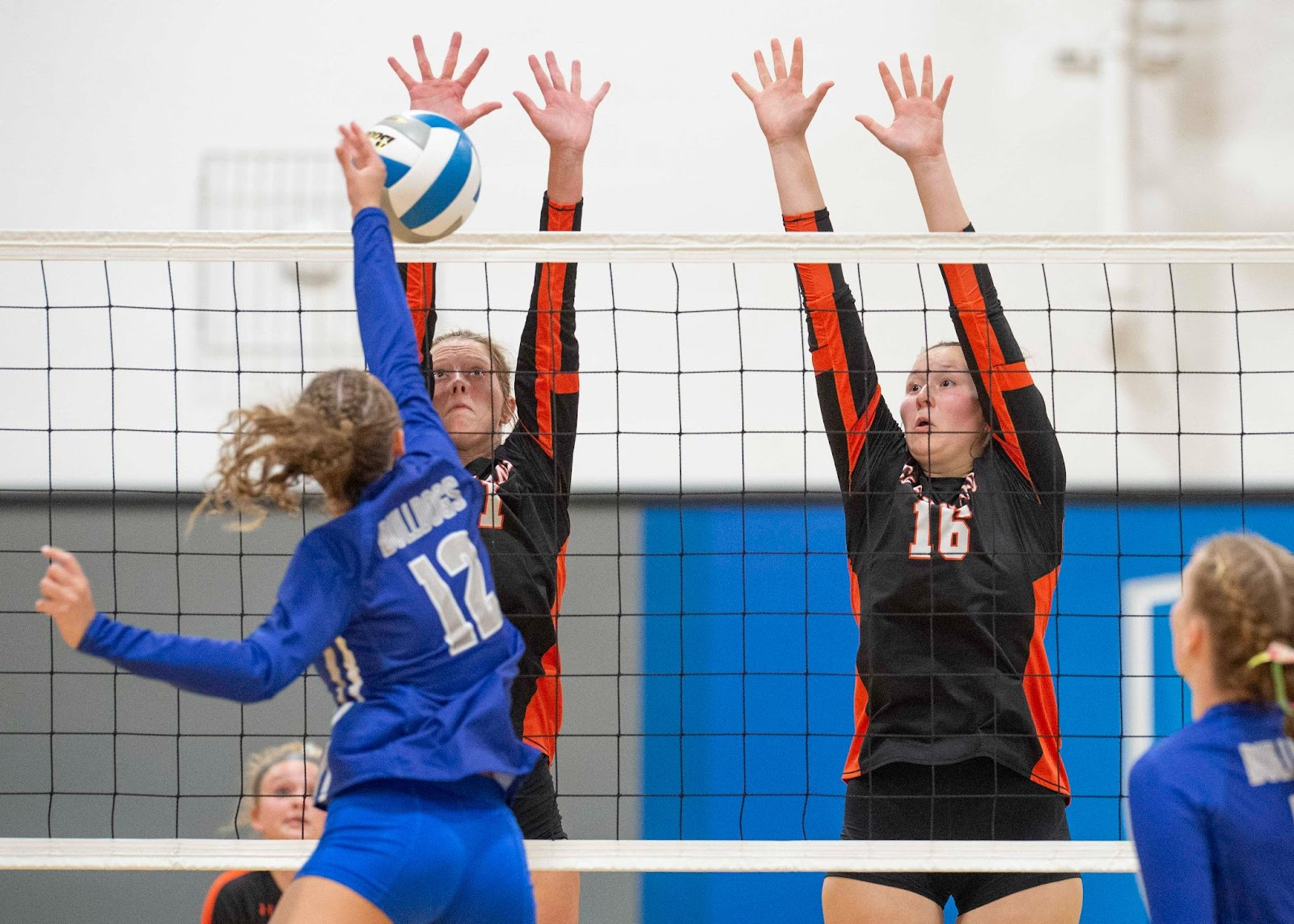 Harley Connor completed this play with an ace block. Beside her is Sarena Remiger. 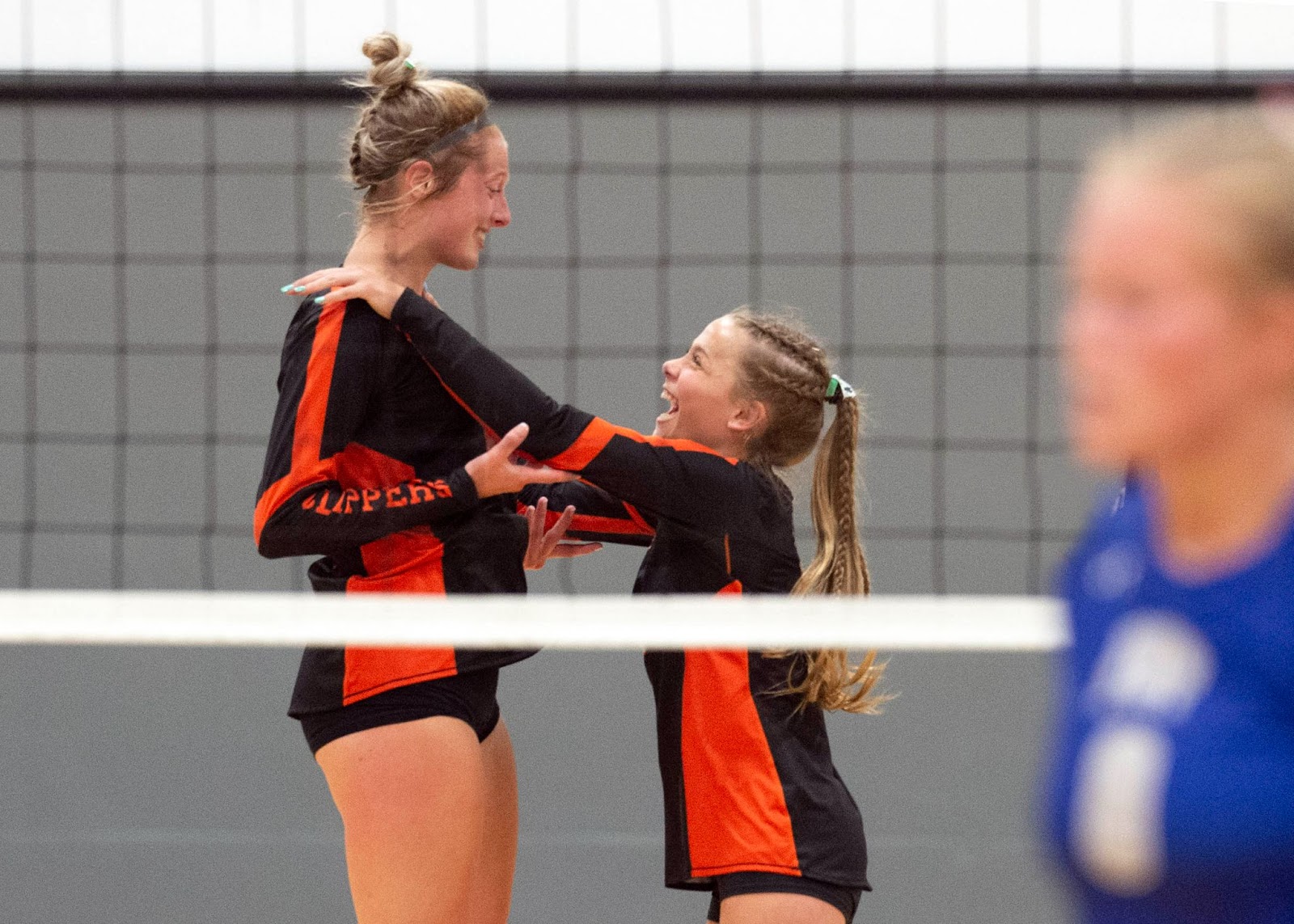 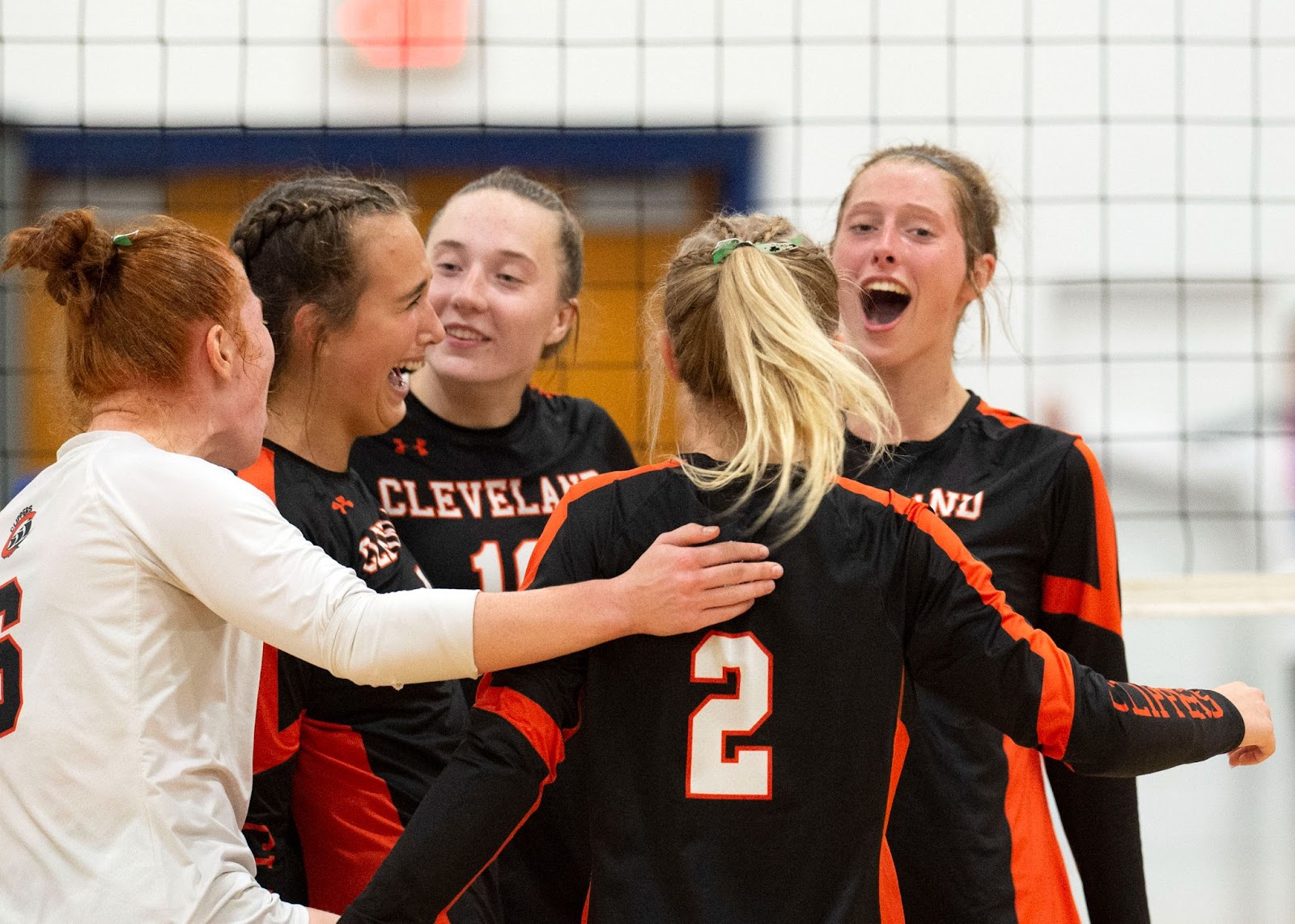 The Clippers celebrate a point. 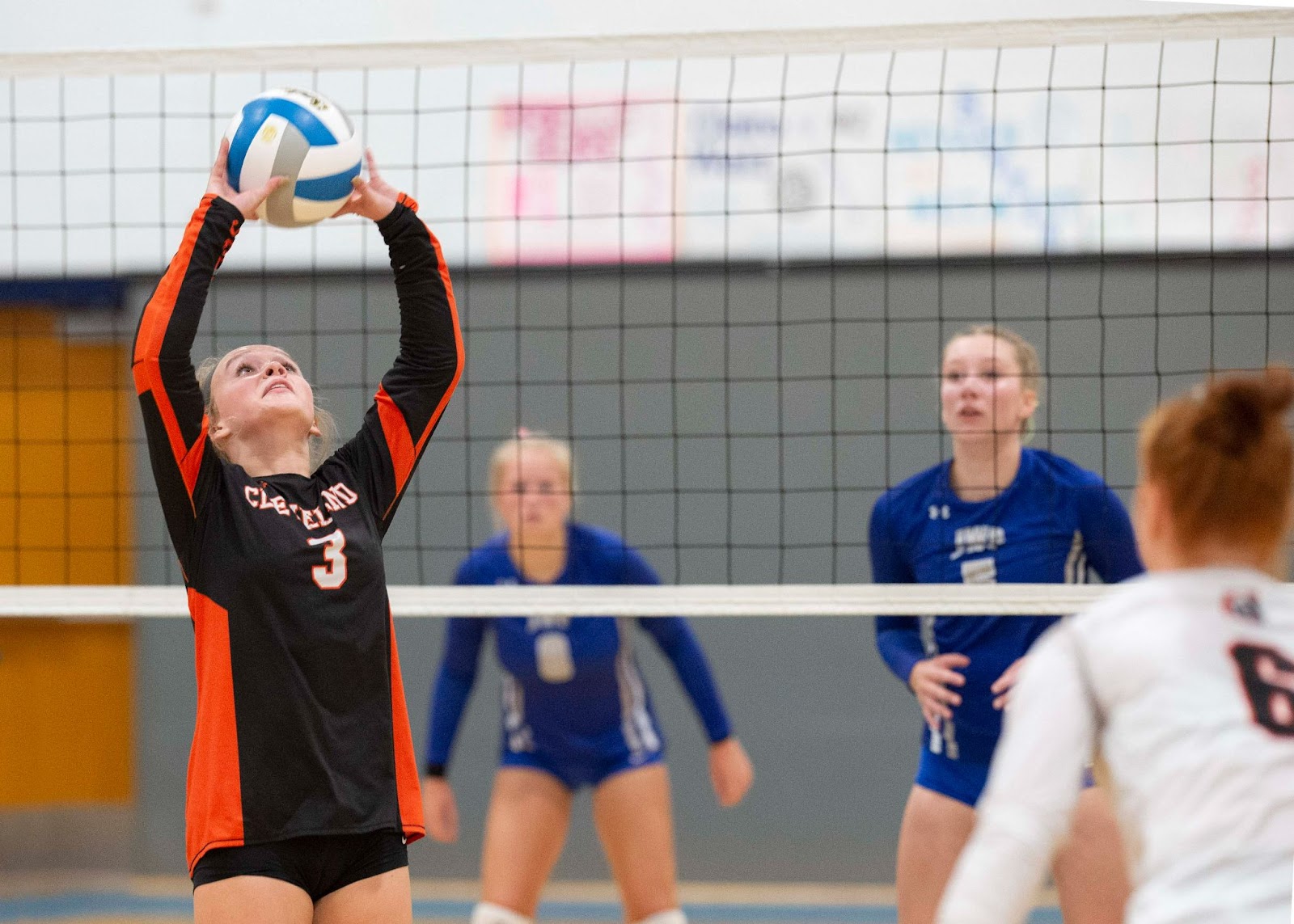 Greta Hahn props up a set. 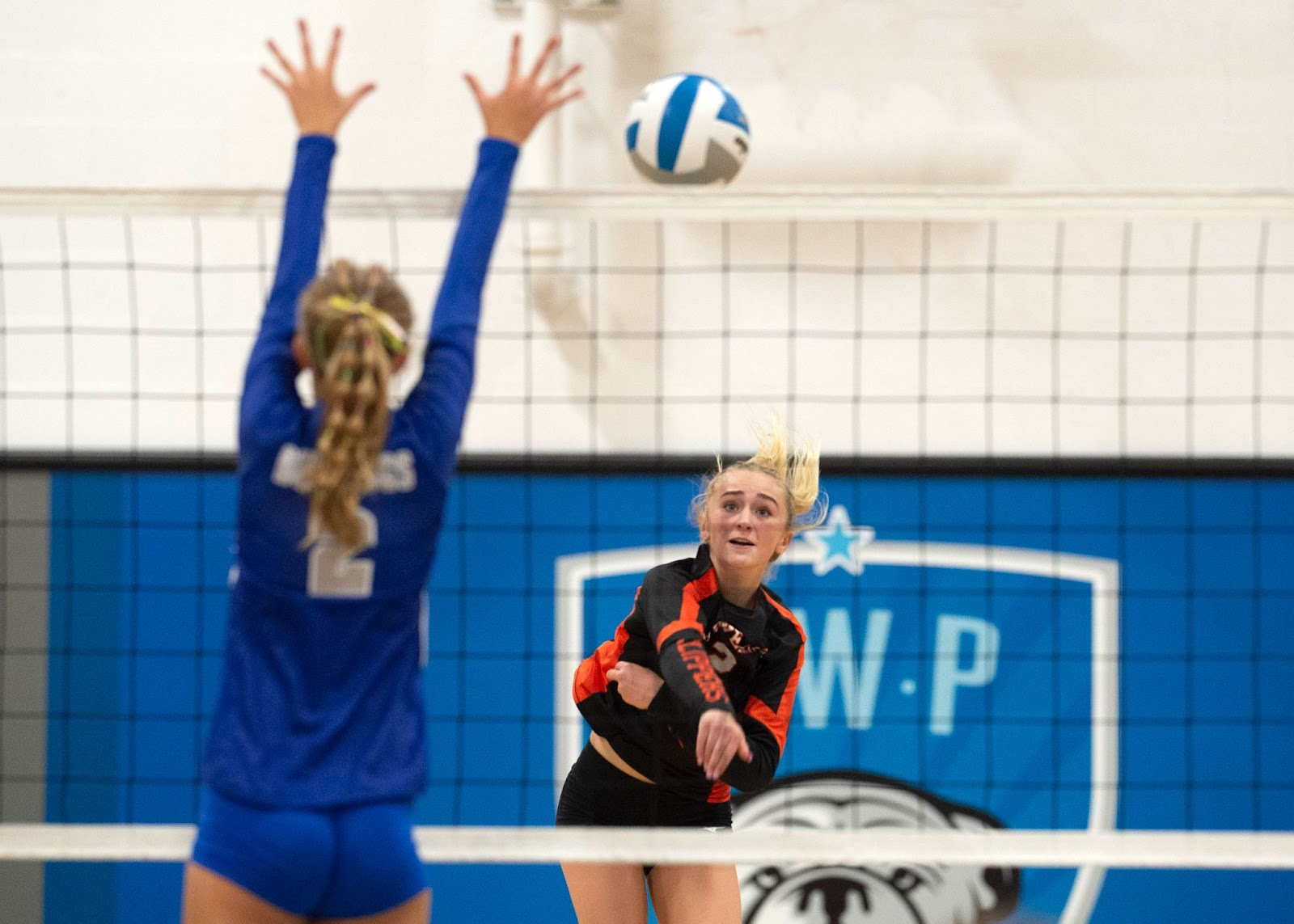 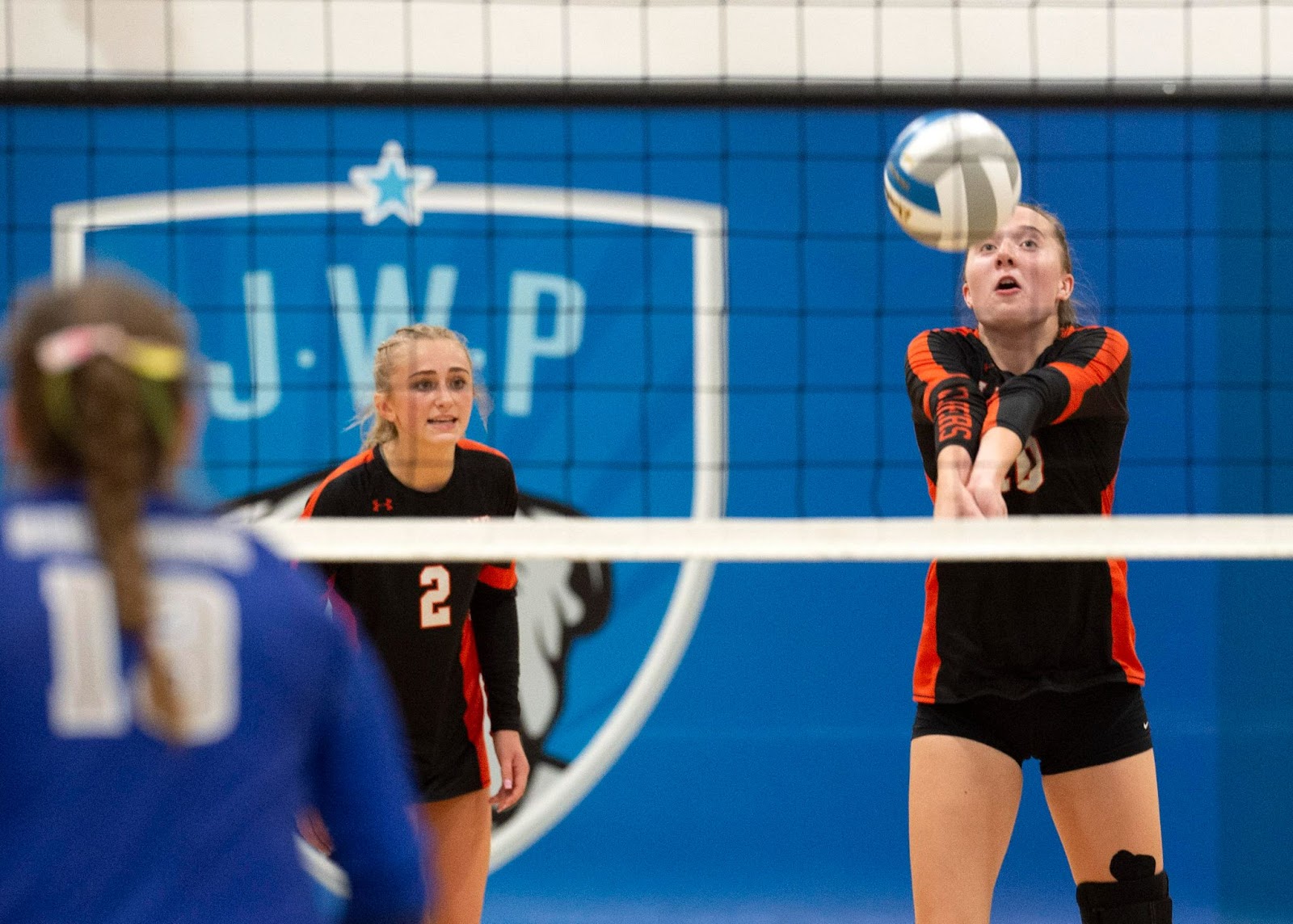 Lexi Waldron bumps near the net. 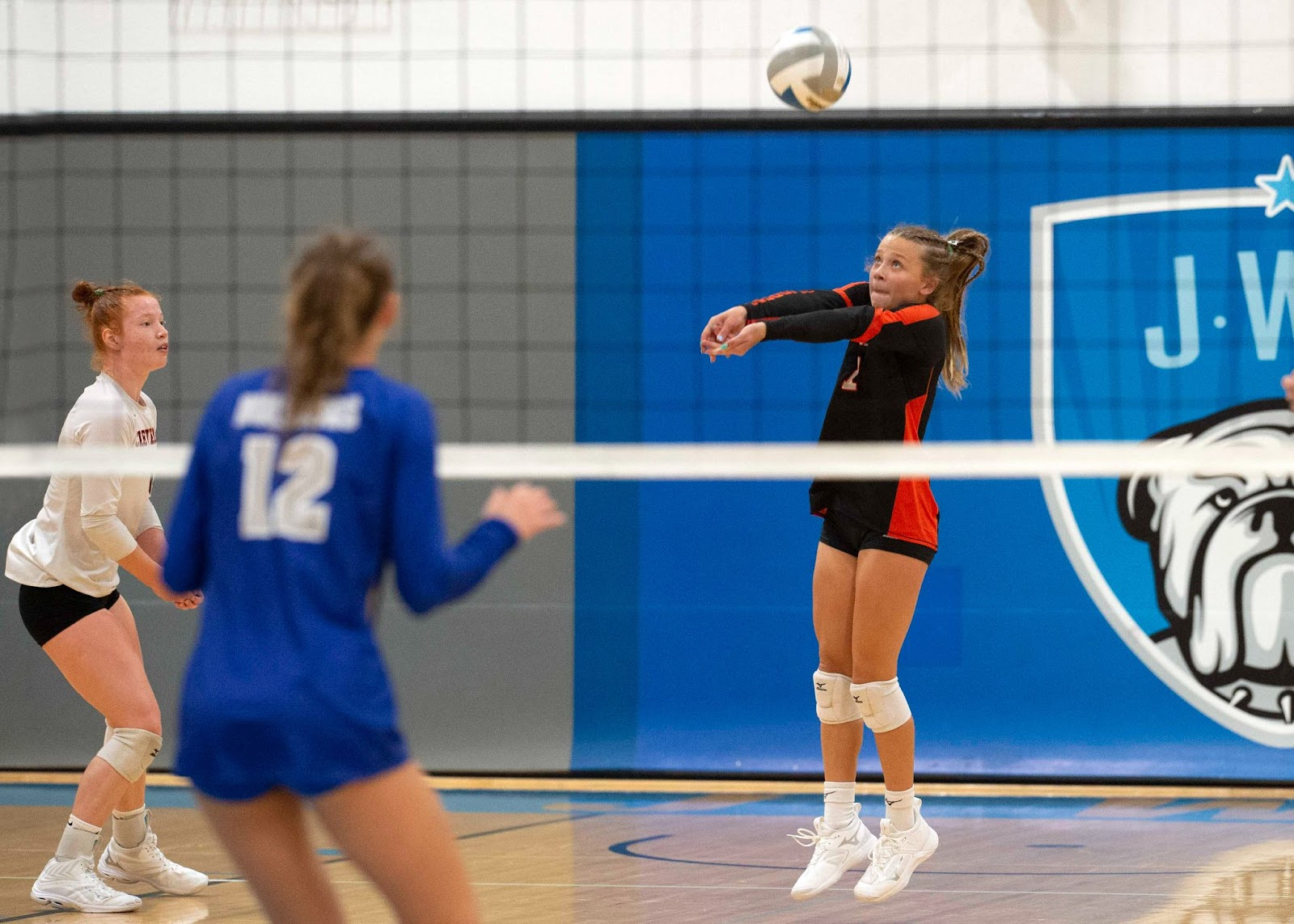 Savannah Meyer on the serve receive. 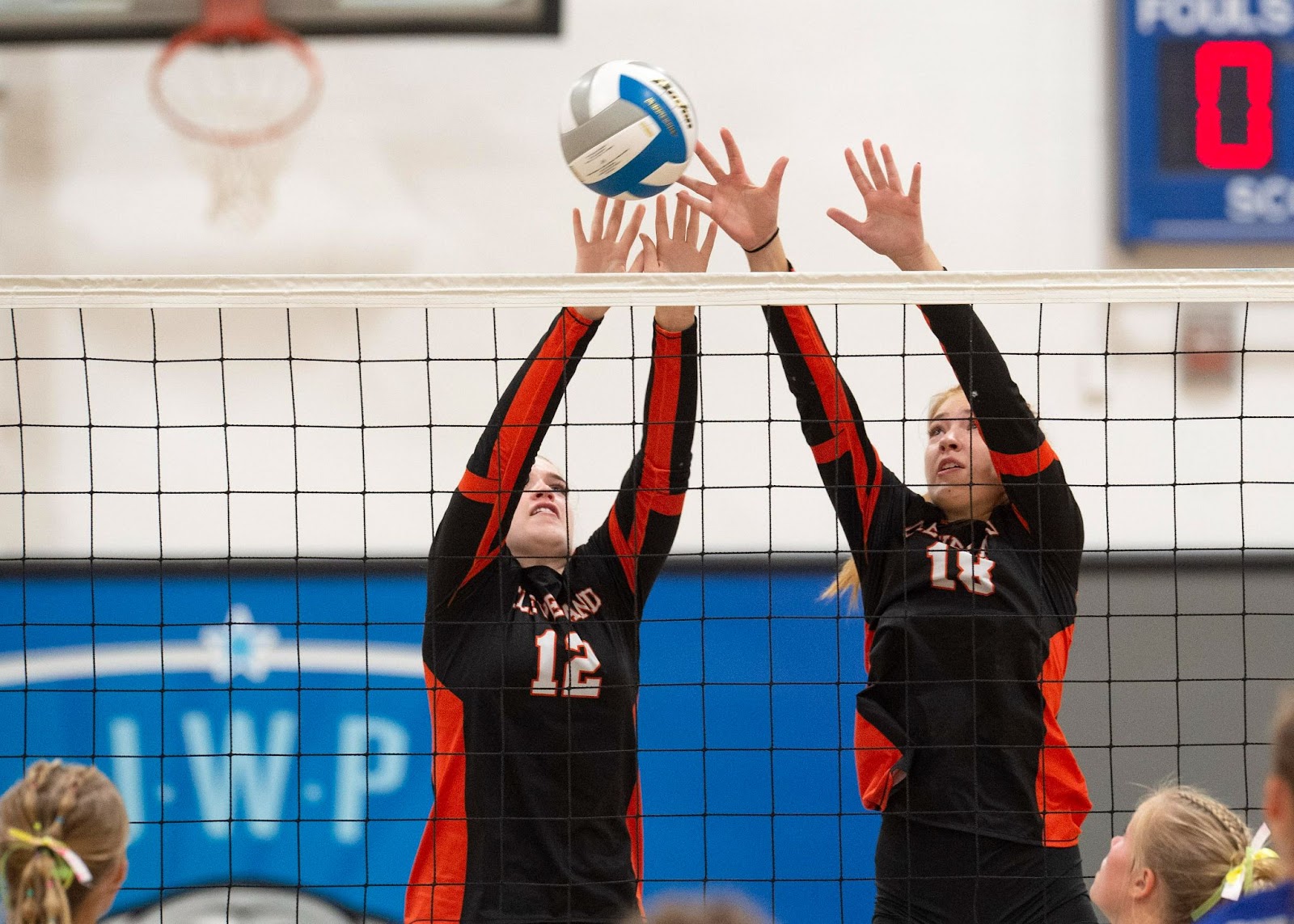 Eighth grader Melia Sathoff got fingers on the ball for an aggressive block and match point. To her right is sophomore Maya Lassiter. 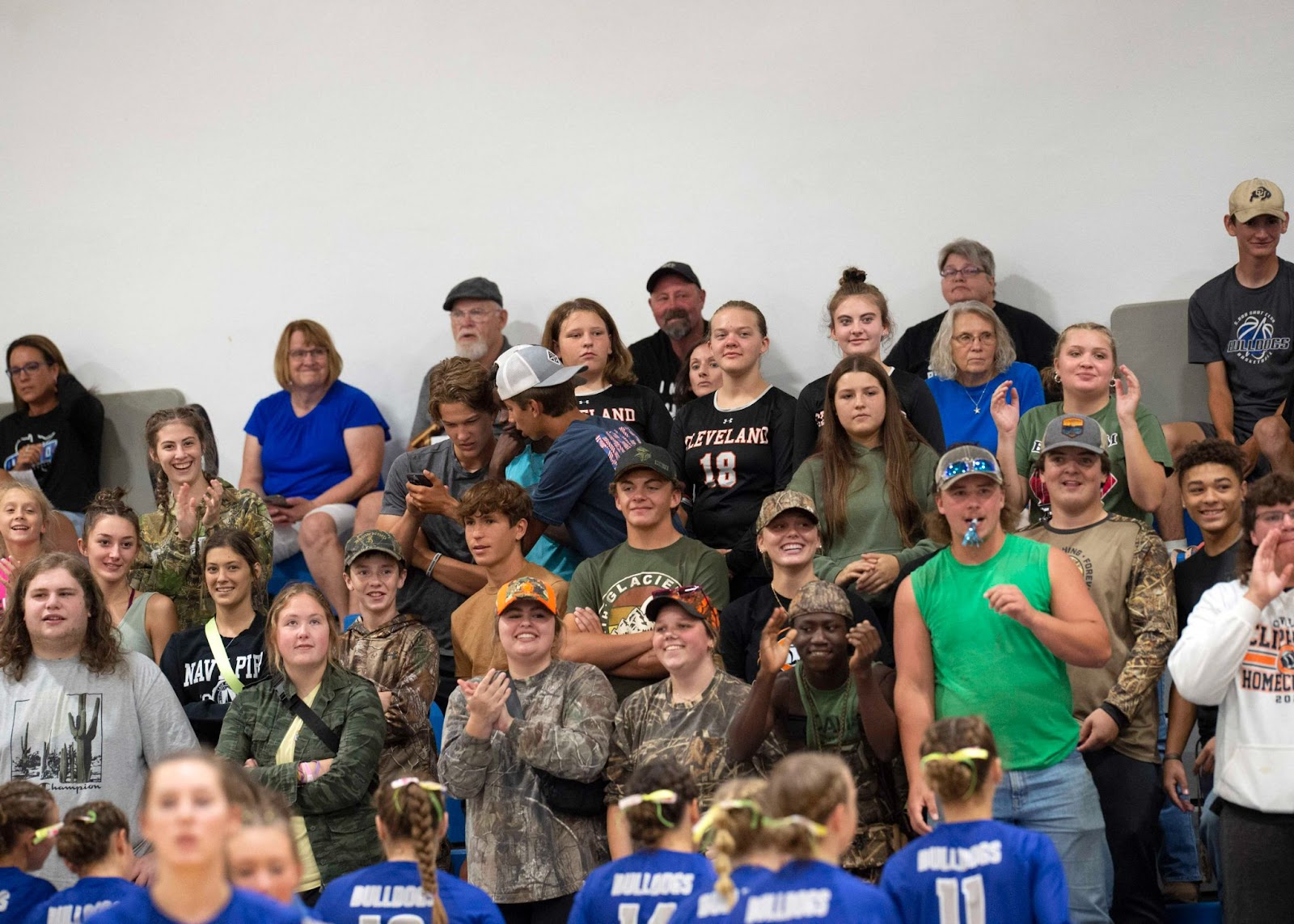 The Clipper student section was hunting for a first win.