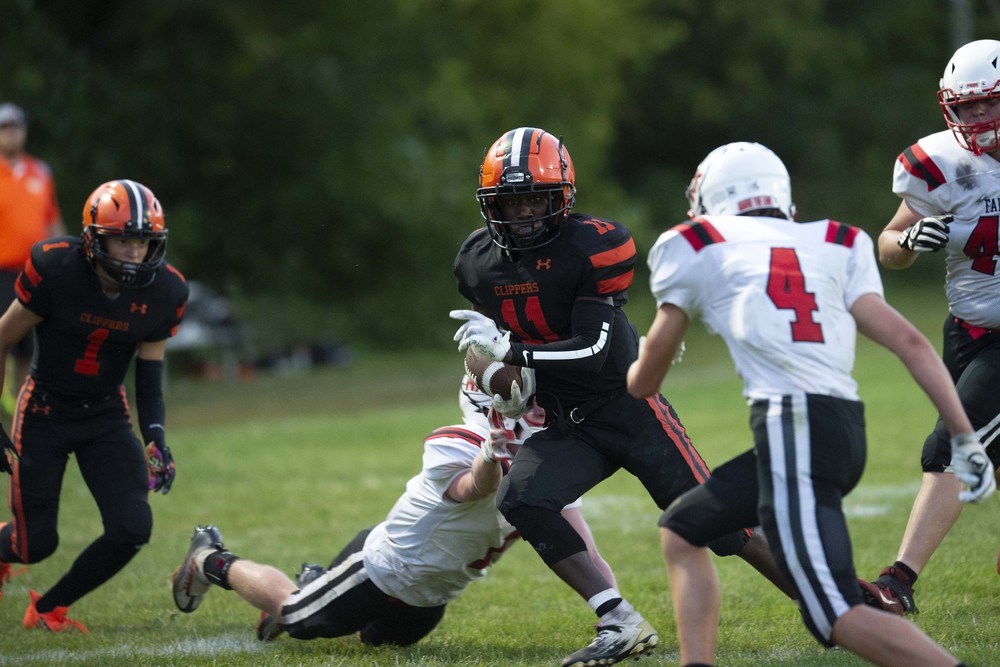 Talented athletes from last season who quit or never joined the team.

A dozen seniors from 2021 lost to graduation.

Half of the 28 who dressed on Thursday just freshmen or eighth graders.

The 2022 version of the Clipper football team beat all of that and came from behind in their season opener for a 20-8 win over visiting Wabasha-Kellogg.

Head coach Erik Hermanson attributed the victory to a spirit of team over the individual.

“It’s togetherness and working together. There’s not a single person out here who thinks they are better than anyone else or it’s all about them. All they want to do is work for each other and make each other have fun and be successful.”

After the opening kickoff, the Clippers marched 46 yards to the WK 24 before they were stopped short. Taking over on downs, the Falcons rattled off eight runs before crossing the goal line on a 3-yard carry.  With the PAT run, they were up 8-0 with 2:37 left to go in the half.

But the Clippers never gave up a point after that.

Sophomore quarterback Blake Lyons got picked off on the next series, but the Clipper defense only gave up 6 yards, and they got the ball back on downs on their own 14.

After a 27-yard Kale Kelley run, the Clippers were forced to punt. They recovered the punt on the Falcon 28. On fourth and 5 but in great position to score, Lyons got intercepted again. Had the defender been stopped in his tracks, the pick wouldn’t have been any real damage, but he returned the ball to the Cleveland-Immanuel Lutheran 45.

Lyons didn’t come into the game with a ton of varsity experience. Last year, he was thrust behind center midway through the second game when senior Jackson Meyer suffered a season-ending injury. The freshman QBd two more games, was injured himself, missed two games and got back for the homecoming game, where he lasted three quarters before an injury ended his season.

Lyons completed eight of 23 passes for 105 yards on Thursday. Besides the easy interceptions, a couple of times his tosses were right on the money but slipped through the receiver’s fingers. He got sacked twice too.

“There was a couple of plays they got through, but that’s going to happen every game,” said the sophomore. “I just have to move in the pocket. It’s the first time I played on a varsity field with these guys, and we just had to get some chemistry going. It’s the first game of the season, so I am proud of everyone.”

The Clipper defense held again. Sophomore Nick Simonette stopped the fourth-and-5 run, and the Falcons had to punt.

Featuring a 25-yard Kale Kelley catch and run, the Clippers took the ball to the W-K 18. From there, it looked like senior back Henry Strobel was going run the remainder for a TD, but a defender got a hand on the ball just in front of the goal line (above).

But Blake Lyon’s younger brother Carson Lyons was in the vicinity and alertly grabbed the ball and ducked in for a score.

“It was just sitting there on the ground, and I picked it up and ran it in,” said the eighth grader.

With a Lyons-to-Kelly PAT pass in the corner of the end zone, it was all even at eight with 1:57 to go before the intermission.

With temperatures around 90 at kickoff, the ability to beat the heat was a factor for both teams, and as the game progressed, it was clear the momentum swung to the Clippers.

“We’ve been playing this game for years, where we’re the quicker, hopefully more athletic team,” Hermanson said. “The teams we play are usually bigger and stronger. The question is are they going to wear us down, or are we going to turn it into a track meet? Today we wore them out.”

In their first possession of the second half, the Clippers scored again. That drive featured a 13-yard Strobel run and a 35-yard Kelley catch and weaving run to the Falcon 13. From there, junior Jaxon Libby dashed up the gut for the score. Lyon’s PAT pass was dropped, but the Clippers were up 14-8 with 3:04 left in the third quarter.

Hermanson said the Clippers began to move the ball  in the middle of the second quarter when they started running to Nick Simmonette’s side. Simonette is a 235-lb sophomore guard, who was moved up to varsity midway through the season last year.

“We ran 80 percent of successful plays behind him,” Hermanson said. “You wouldn’t think a 10th grader would be doing that, but he was a man among boys out there, even against those big guys.”

With 4:13 left in the final frame, the Clippers scored the final TD on a 24-yard Libby run to put the finishing touches on the triumph. Lyons’ PAT pass was incomplete.

Libby, one of two players from Immanuel Lutheran, was playing in his first football game ever. But he felt comfortable in orange & black from the get go.

“I come from a small school,” he said. “We don’t have a football team. It was something I always wanted to do but never had the chance. The Cleveland kids helped me so much. They taught me football techniques. The coaches and the players are all great. I’m having a great time.”

“It’s so incredible to have the Immanuel Lutheran guys,” Hermanson said. “There’s only two, and they were two guys who have never played football in their lives, but they came in and they played this whole game. Immanuel has sent Cleveland some great players in the past. Hopefully they can send us more than two at a time.”

Hermanson didn’t go so far as to say there was anyone who doubted the Clippers, but he did say they never doubted themselves.

“I think everyone was rooting for us as hard as they could, but anybody who sees three eighth graders out there at once, and we had that quite a few times…”

He said the early win will help drive the Clippers the rest of the season.

“The fact that their hard work paid off, how far we’ve come from the first week of practice until today, will only feed their desire and their belief that when you do work together for the good of the team and the good of the town, that’s fun. That’s why football is so great.”

Kelley was Blake Lyon’s favorite receiver. He caught four passes for 95 yards. Strobel hauled in three catches for nine yards, and Libby had one catch for 1 yard.

In for the final series, Carson Lyons was two-for-two in passing for 13 yards. His classmate Caleb Connor was on the receiving end of both.

It was a good outing on the ground for the Clippers. Libby carried the ball 13 times for 105 yards and two touchdowns. Strobel had 10 carries for 64 yards. Blake Lyons kept the ball after five snaps for 18 yards. Freshman Caleb Possin had four carries for 18 yards, and Carson Lyons had one carry for 19 yards.

Each team had 13 first downs. There were only two major penalties, both on the Falcons, a rouging and a pass interference. The Clippers had a combo of six offsides or encroachment infractions while the Falcons had five.

Gabe Sullivan returned both W-K kickoffs, one for 19 yards and one for no yards. Strobel had kicking and punting duties. His only punt went 25 yards. He also returned a punt 11 yards.

“I was just glad that the people we were counting on came through,” Hermanson said. “We have two captains, Jacob Rohlfing and Gabe Sullivan, and each on week based on practice and based on play, we’ll name another captain for next week, and I know for sure this week it’s going to be Nick Simonette because of his incredible blocking.”

The Clippers will look to avenge a last-season fluke loss when they travel to Waterville on Friday. A plus will be that junior Carter Barto has been cleared to play after suffering an injury that kept him out of sports since last November. 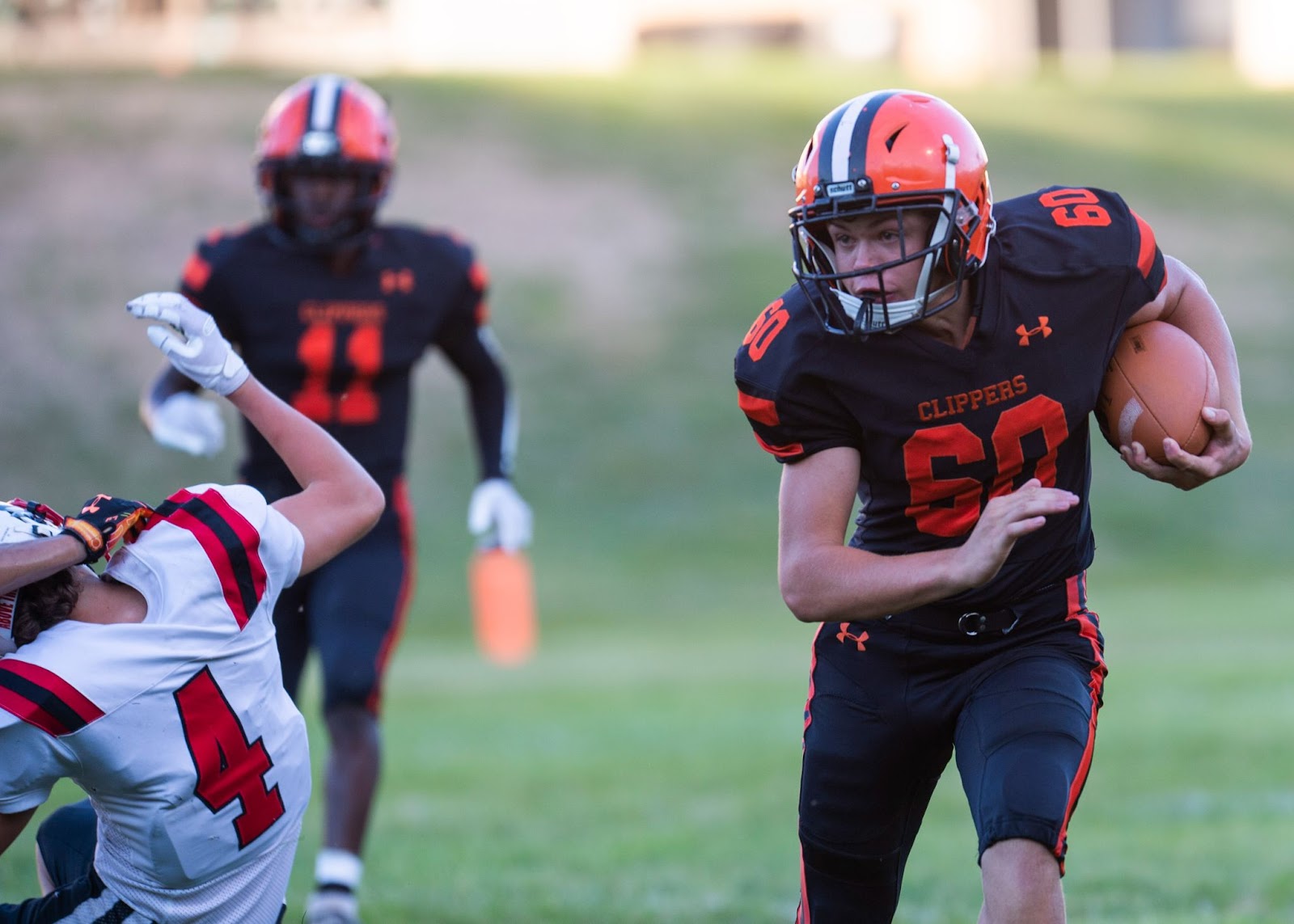 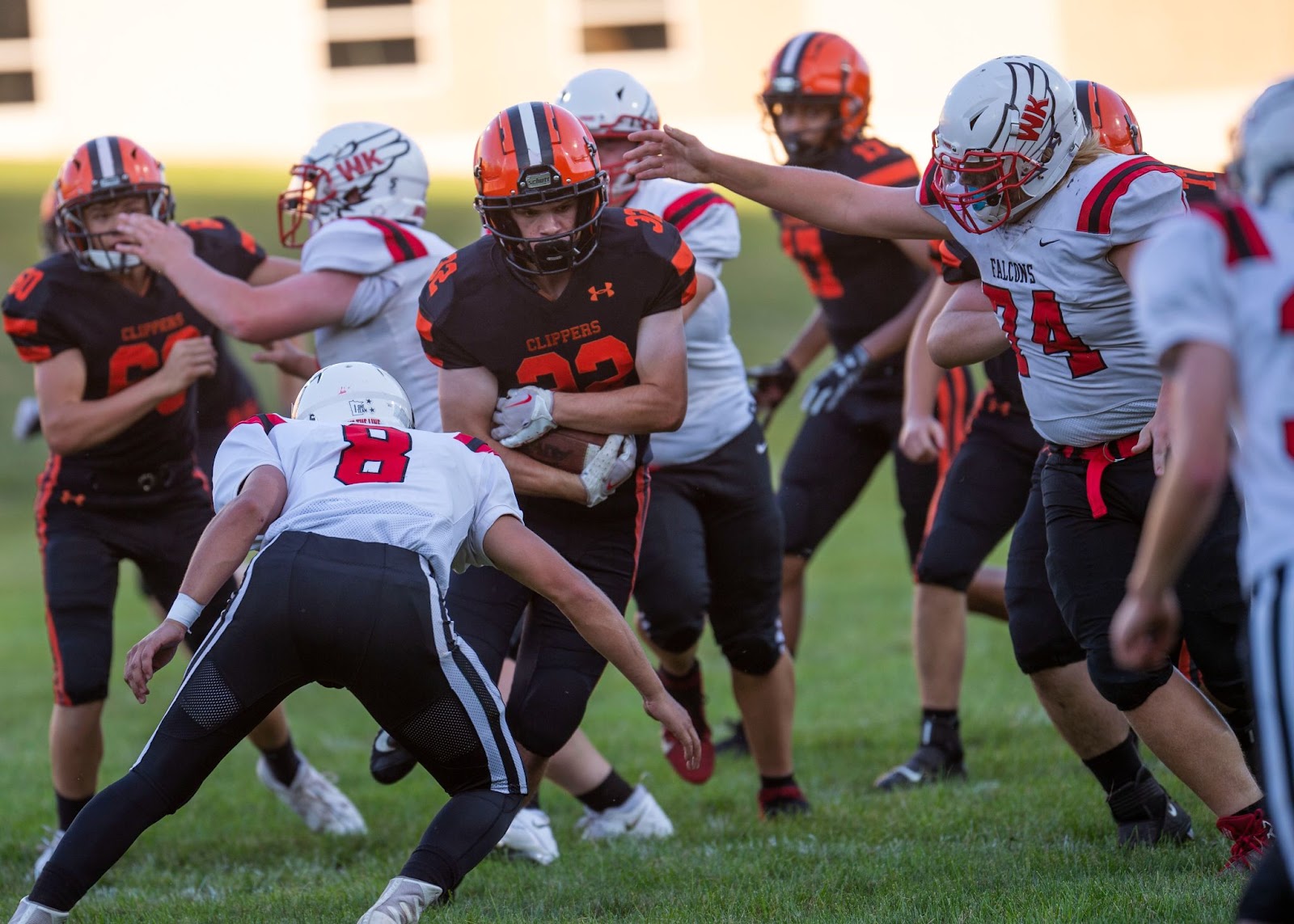 Jaxon Libby slips through a hole. In his first ever football game, the junior from Immanuel Lutheran scored two touchdowns. 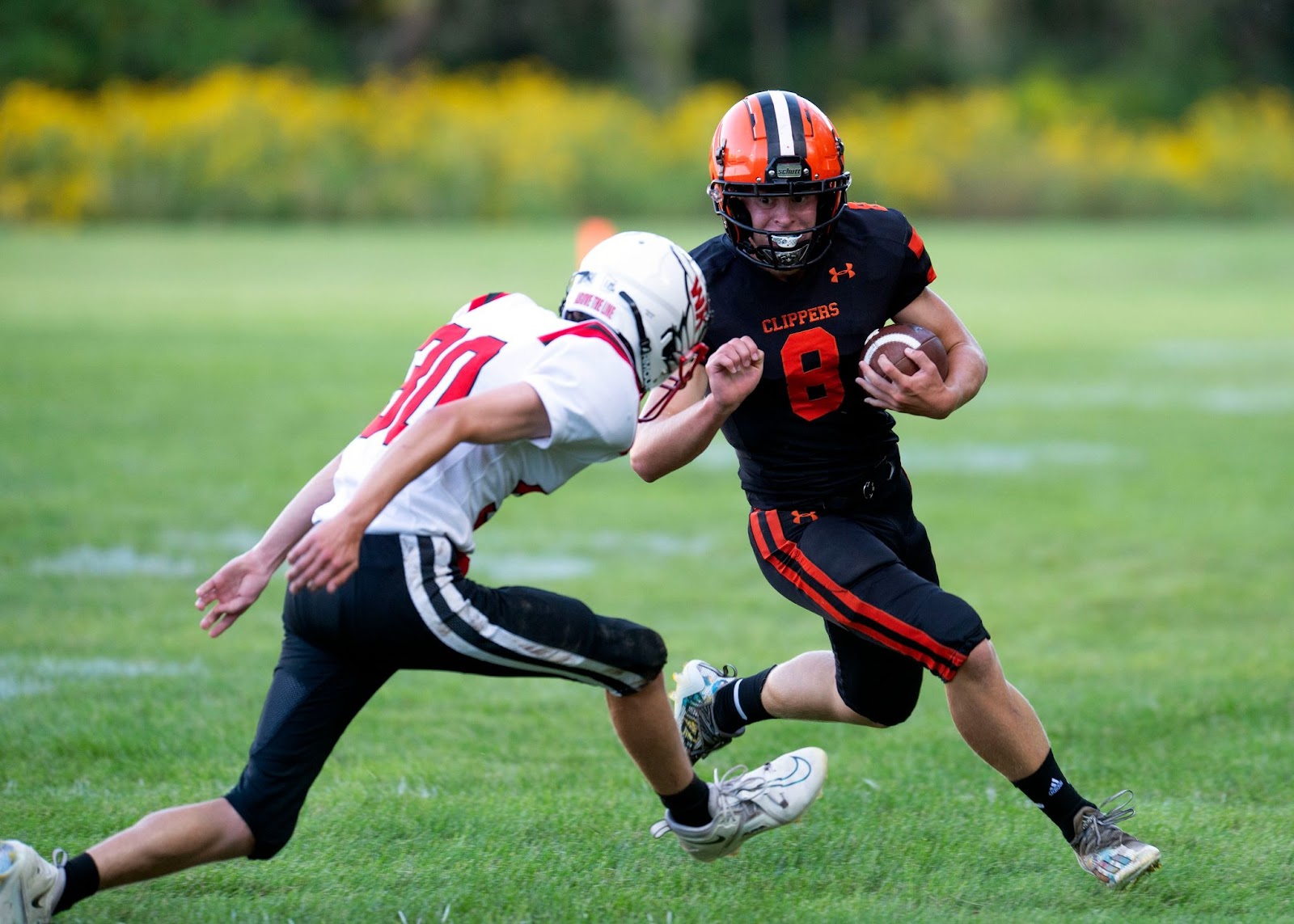 Blake Lyons gets set to stiff arm a defender. 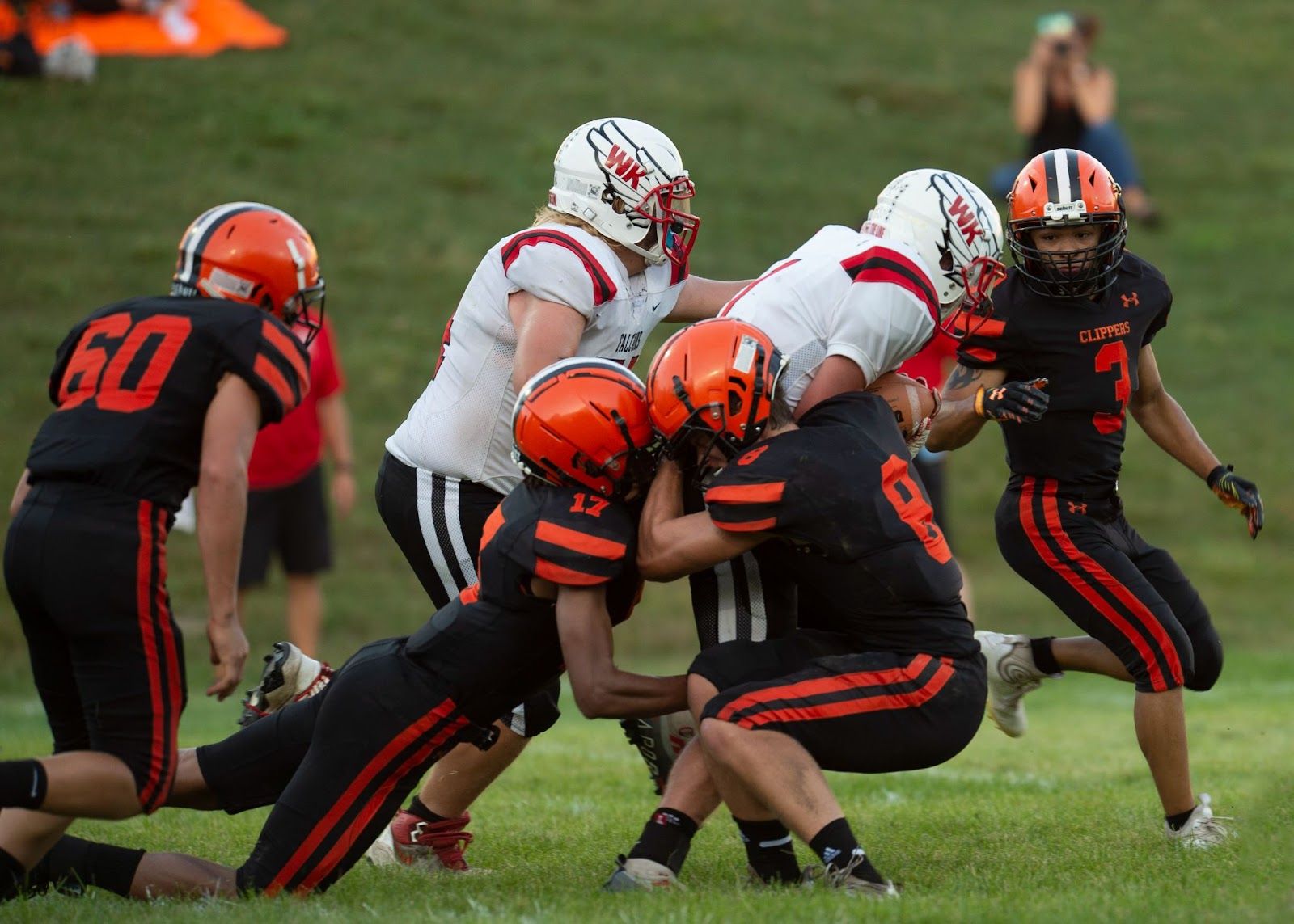 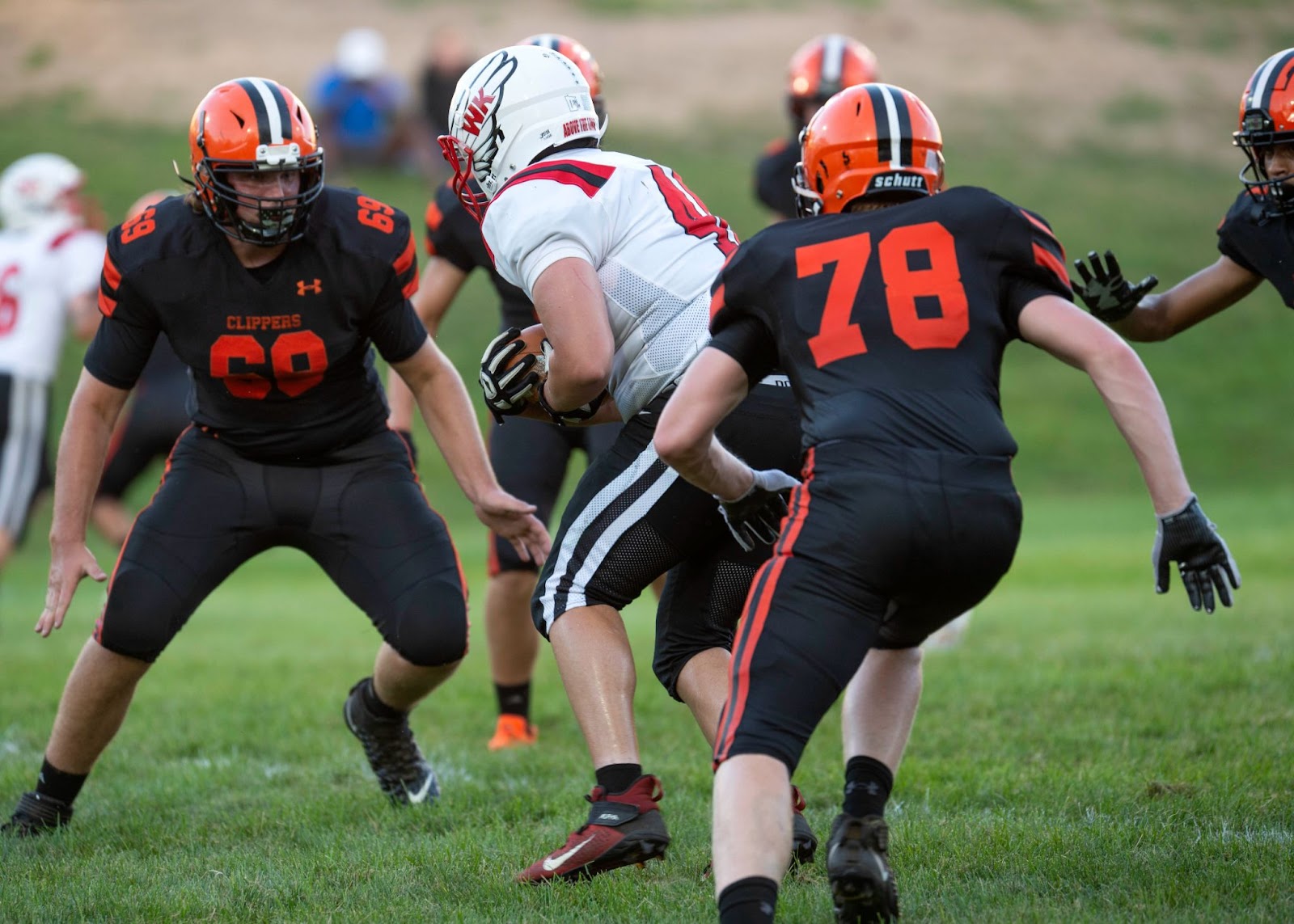 Just a sophomore, Nick Simonette loomed large in the win. 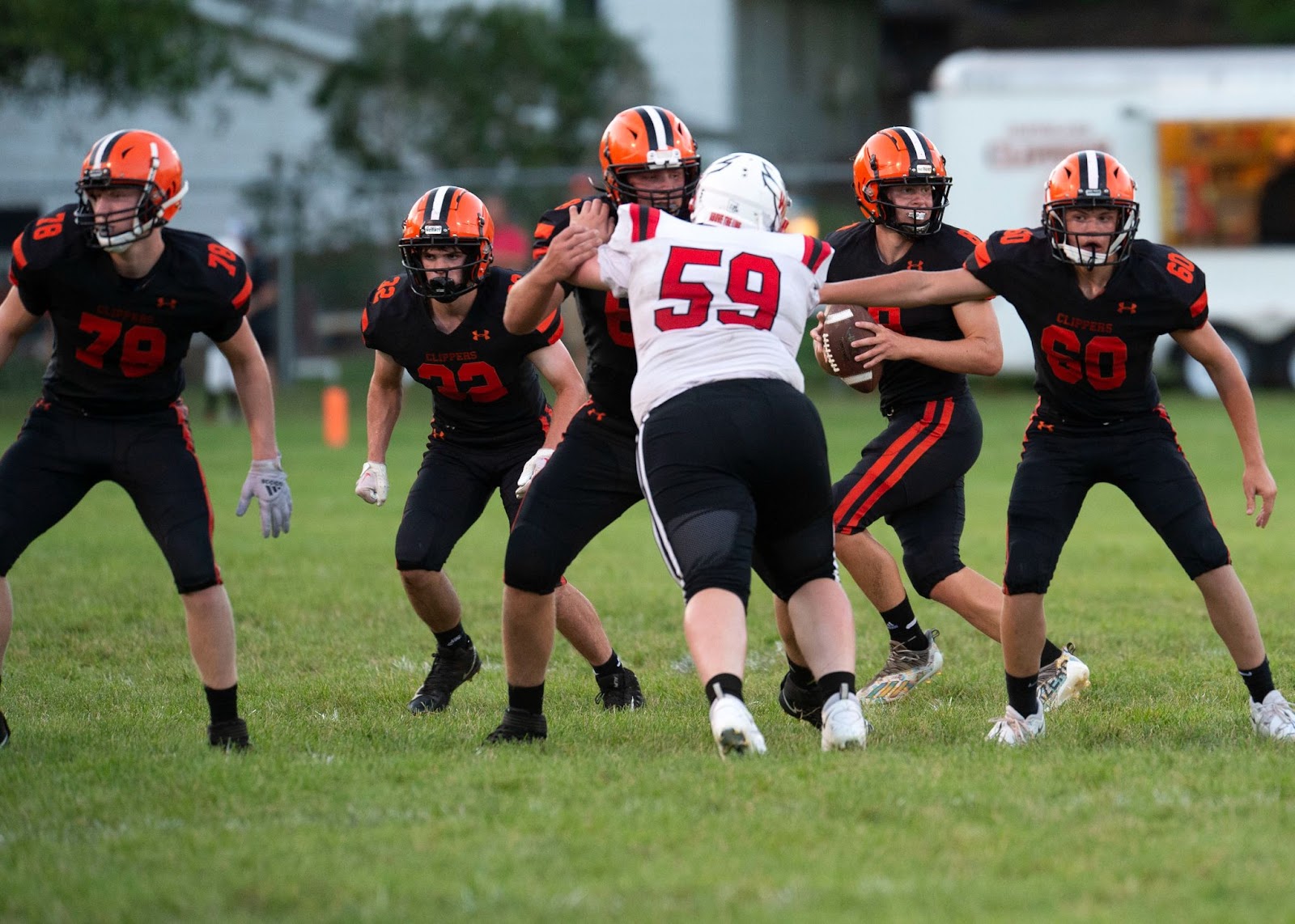 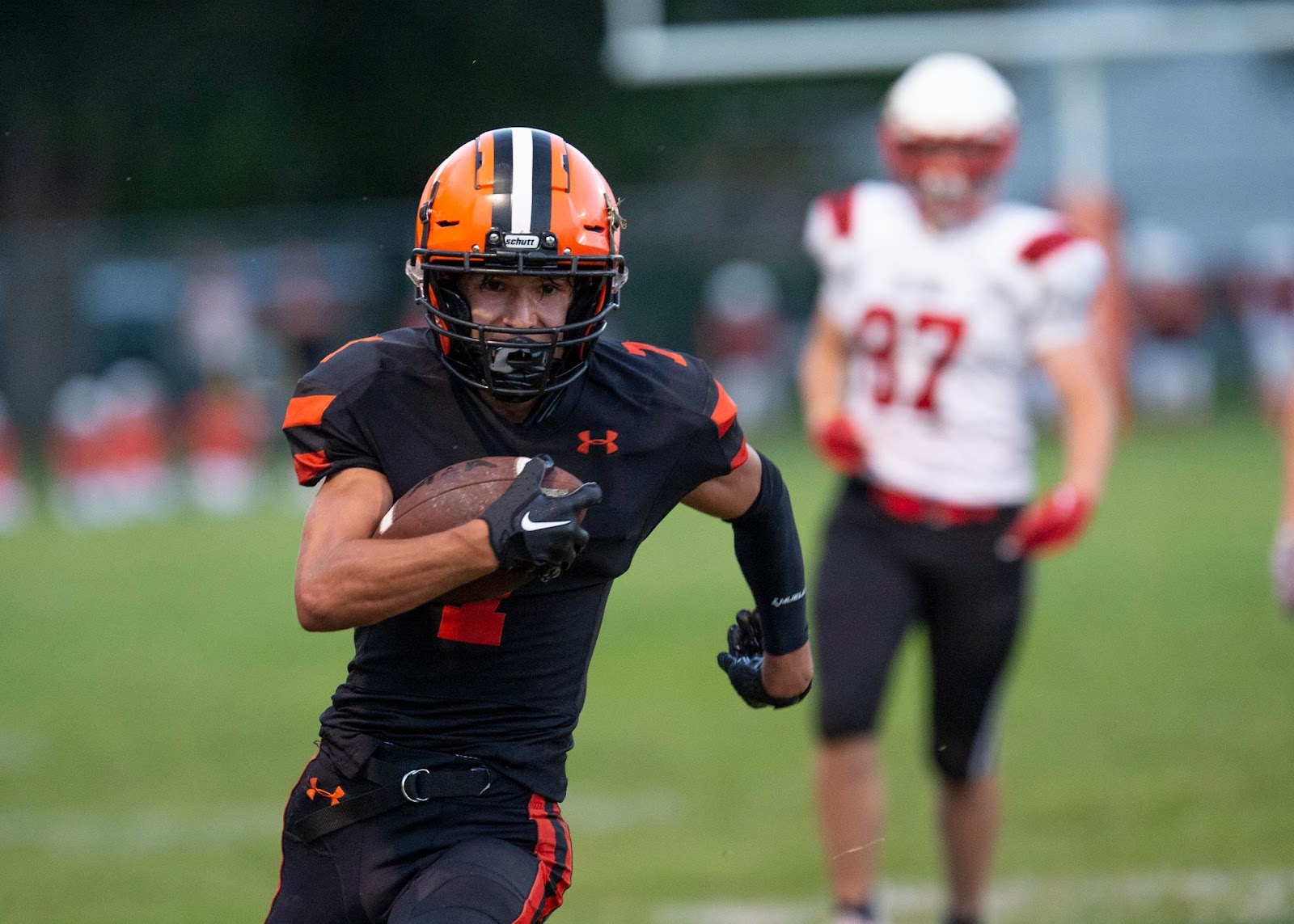 With four catch and runs for 95 yards, Kale Kelley had a productive night. 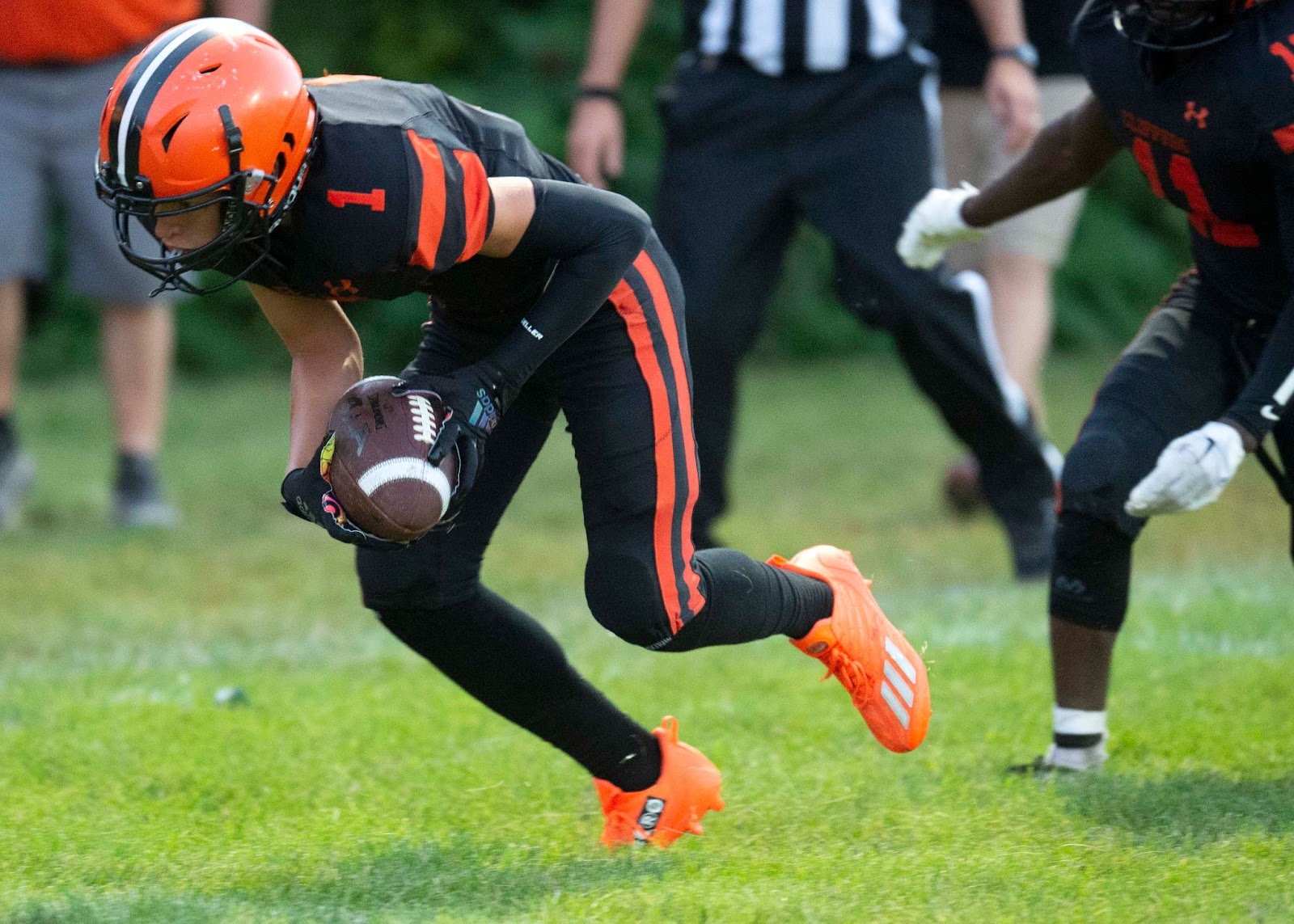 Three yards from the end zone, a Wabasha defender stripped the ball from Henry Strobel (above), but Carson Lyons was right there to recover it for the TD. 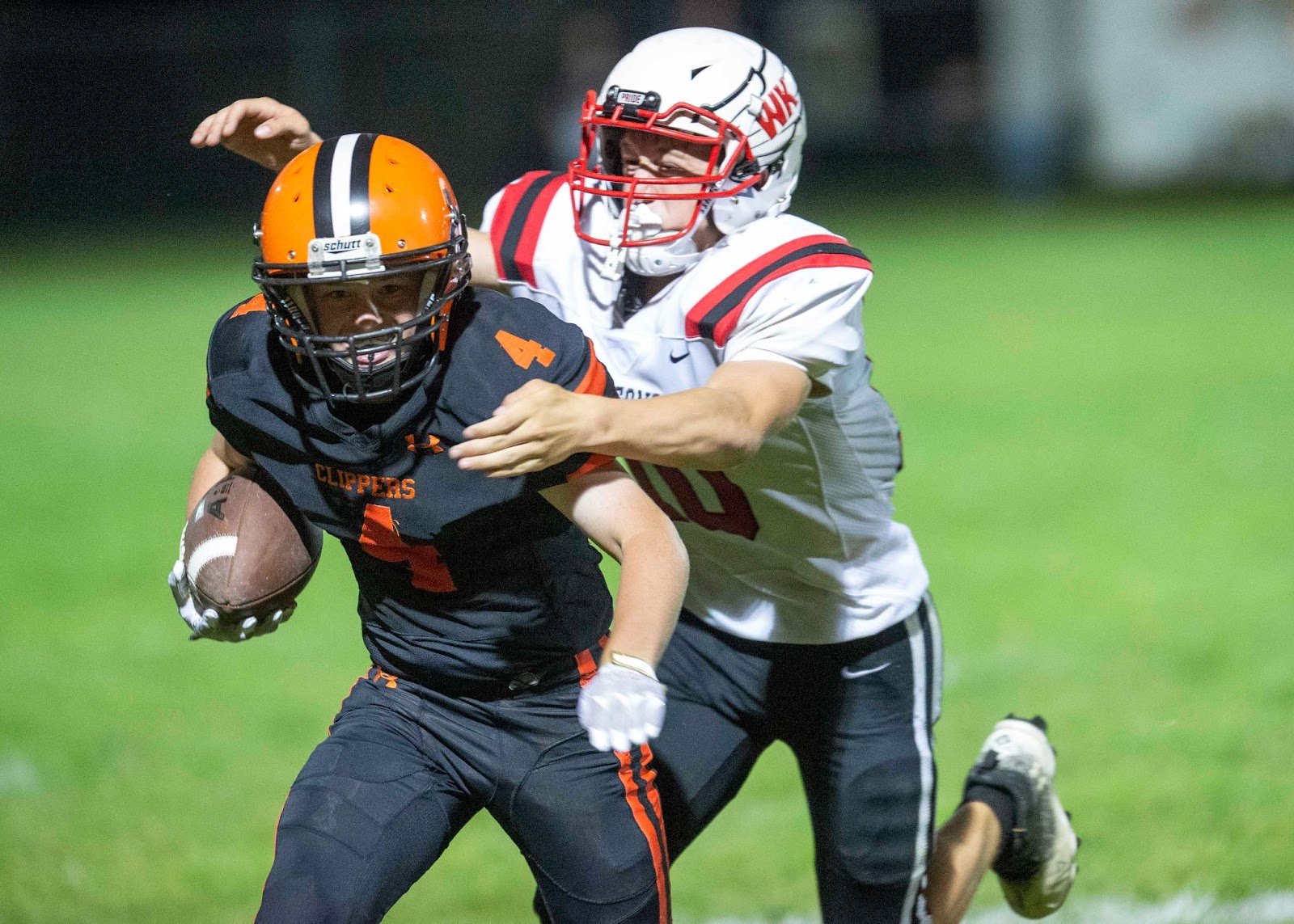 Caleb Connor on the run. 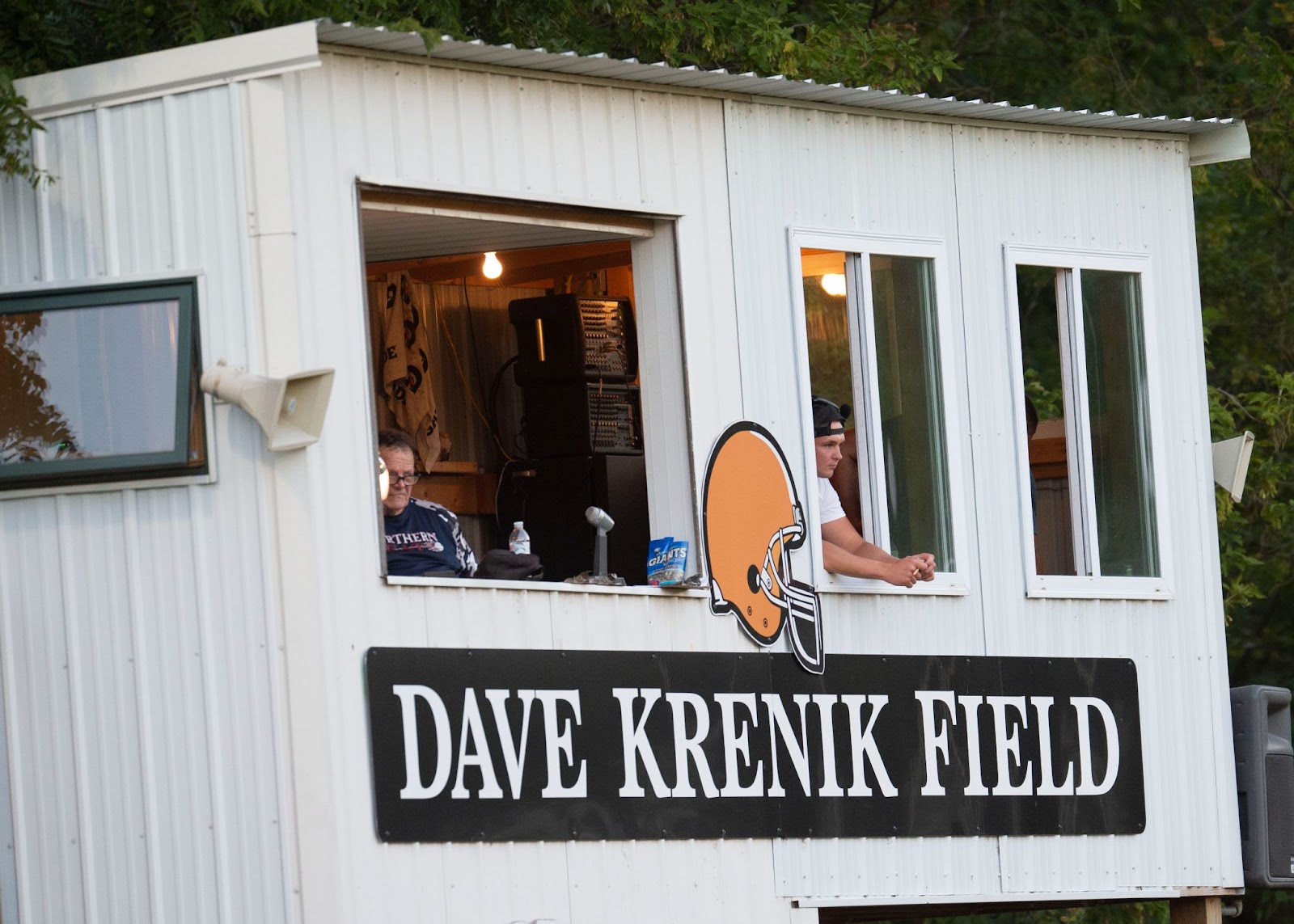 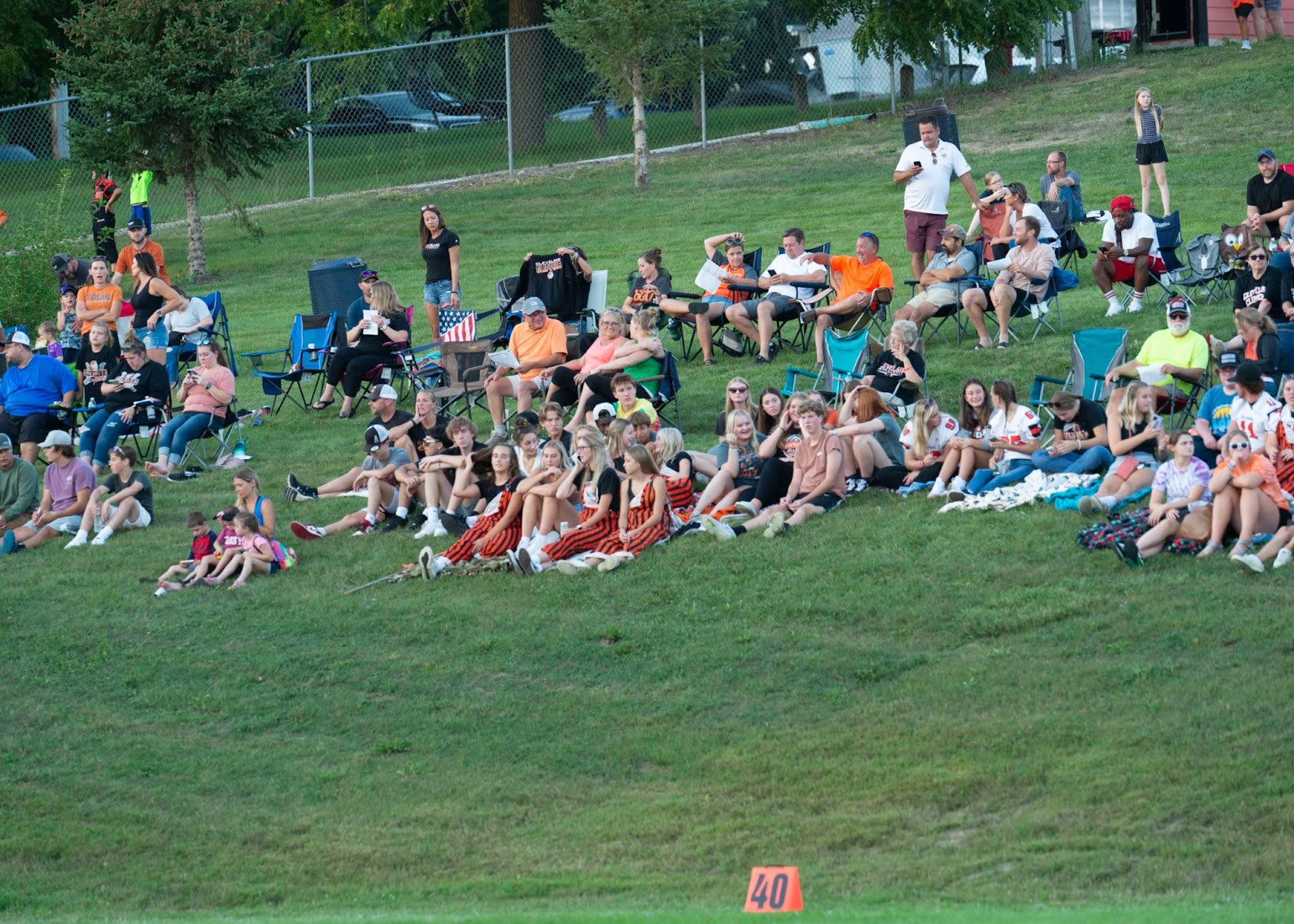 It was a pretty good crowd on the hill, and the Clipper fans got their money’s worth.