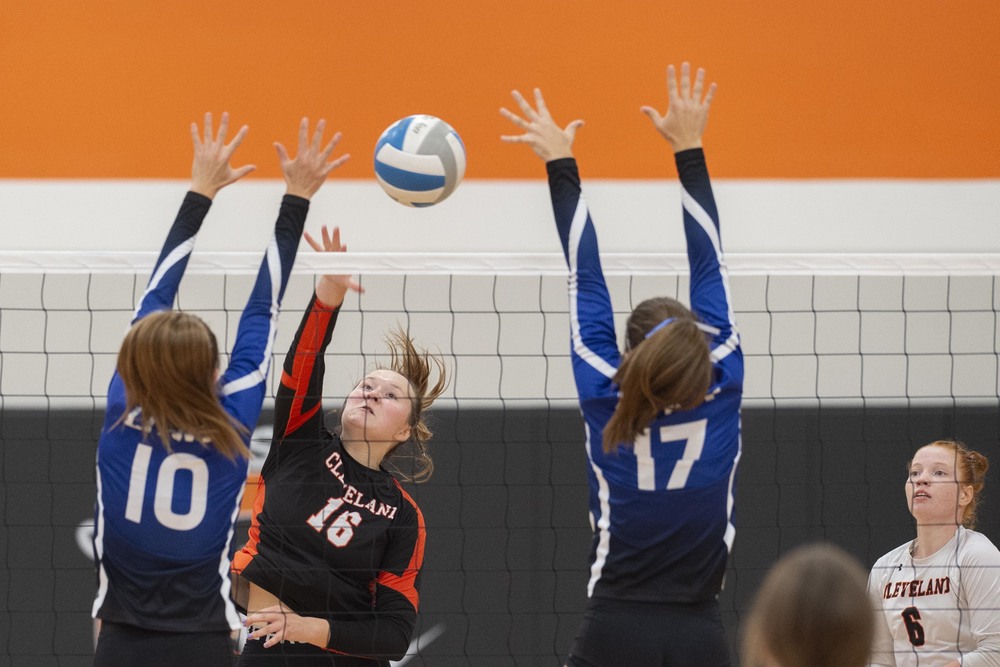 Clipper girls give up a set but come out on top against MLA, LCWM

In matches against non-conference Mountain Lake in Comfrey on Tuesday and conference rival Lake Crystal-Wellcome Memorial at home on Thursday, the varsity volleyball girls surrendered a set but still managed to come out on top of a hard-fought battle.

“The girls did a good job stepping up when we needed to, and we got just enough plays out of everybody to win tonight,” said head coach Dave Nixon after the home win, the first in 2022.

Harley Connor’s ace tip was the first point for the Clippers against the Knights, but with half their scores coming from attacks, the Knights went up 10-8 early in game one.

With a LCWM hit out of bounds, the game knotted at 11 but see-sawed from there to 15 apiece before the Clippers scored nine of the next 11. Winners came from an Ava Hahn ace serve, two kills and an ace block from Laci Hollerich, a Connor ace block and a Lexy Waldron kill.

Scoring the next four points, the Knights didn’t roll over, but the game ended 25-21 when a Knight stepped on the net line.

“They are very athletic,” Nixon said. “When they get going, their middles get quicks very well. When that happens, we have to get our attacks going to counter that.”

Scoring the first four points, LCWM got off to another good start in game two. Lexi Waldron’s kill was the first Clipper point. Sarena Remiger (above) won a battle at the net for the first of a three-point Clipper run, but taking advantage of out-of-bounds Clipper hits and three winners, the Knights rallied for the next seven points for a 15-7 advantage and a lead that they never gave up.

Waldron’s winner put the Clippers within four, 19-15, but the Knights scored the next four points, three of them on wayward Clipper hits, and they won 25-16 after an attack.

Remiger, a 5-11 middle hitter, didn’t go as far to say she thought the match was in jeopardy, but losing the set contributed to her uneasiness.

“I’m always nervous about the game because I love playing it, but I trust everyone on the court, and we all want to have fun and at the end of the day it’s going to be what it is going to be.”

“It wasn’t our best second set,” Nixon said. “I didn’t feel like we were being good teammates. There was a lot of frustration showing. Individual players were struggling and were focusing on their struggles and not focusing on their team. I told them we are not going to win this match if we aren’t good teammates to each other, so let’s concentrate on making each other better.”

Nixon’s reproach did the trick, and Clippers turned a 180 in game three.

Connor scored the game’s first point on an ace block. Ava Hahn slapped a hat trick of kills to put the Clippers in front 4-3. After a serve went out of bounds to knot the game at 4-4, the Clippers rallied for the next nine points.

“Everyone changed their energy,” Remiger said. “We all worked together more and appreciated each other more. We gave a lot more encouragement.”

The game ended 25-13 when Greta Hahn put up a low-elevation set for Remiger to smash to the floor.

“Everyone started having fun, and that changed the momentum,” Nixon said. “We got rolling and then they struggled to get in their offense because we kind of caught fire.”

Waldron put down an ace tip for the first point of game four. Savannah Meyer followed up with an ace serve, and, after a Knight hit out of bounds, the Clippers led 3-0.

It was back and forth from there. The Knights pulled ahead at points eight, nine and 12 and then led 17-13, but with kills by Ava Hahn and Hollerich, a Remiger ace tip and a Knight hit into the trellis, it was all even at 17.

“We were able to take our momentum into the fourth set, but Lake Crystal started playing a lot better, and we exchanged blows back and forth,” Nixon said.

The lead teeter-tottered down the stretch, but after an Ava Hahn kill followed by a Waldron service ace to put the Clippers up by a point, Remiger slammed down a match-point kill for a 25-23 triumph.

“The coach always tells me to hit the ball because I used to tip a lot, so I just saw it, and I thought ‘I’d better do something, so I just hit it,” Remiger said.

Nixon said their focus was on wining the fourth game and staying away from the game to 15.

“We made two more plays than they did to come out on top, but everything you that you can possibly do to stay away from that fifth set ever you want to do is ideal because anything can happen. If you start out struggling on serve receive because they have a hot server, they can go on a five-point run easily, and then you are scrambling.”

Ava Hahn had three ace serves. Sweere landed all of her 14 serves.

Nixon expanded the lineup in game three to get more players court time and give Ava Hahn a chance to rest a sore knee. It took a little time for the group to adjust. The Clippers also got called for under the net about a dozen times in game three, uncharacteristic errors that made keeping the rally going difficult, he said.

While the Wolverines took game four into extra points, the Clippers eked out a win and once again kept away from the rubber game.

The Clippers competed in a tournament in Waterville on Saturday (see separate story). 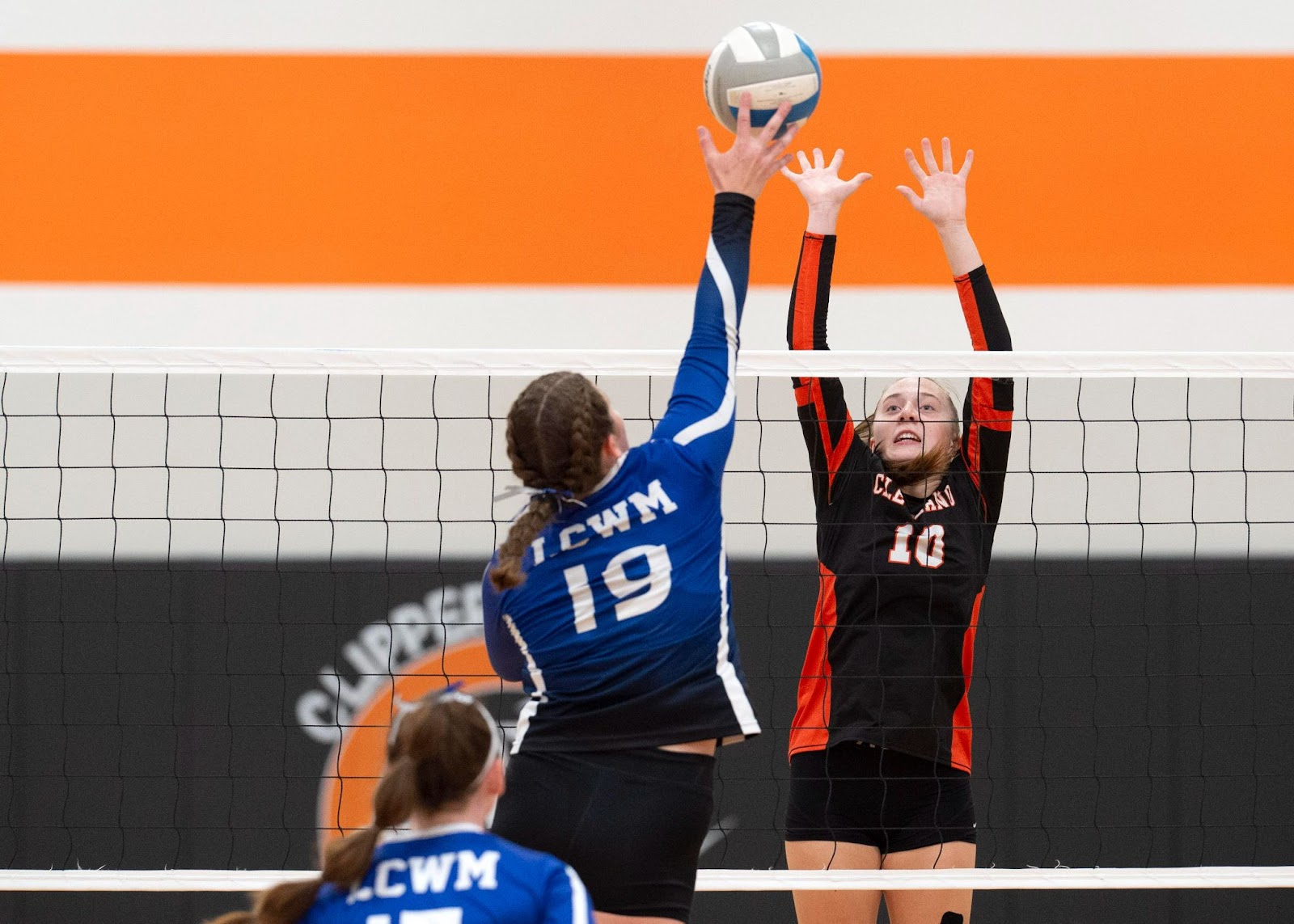 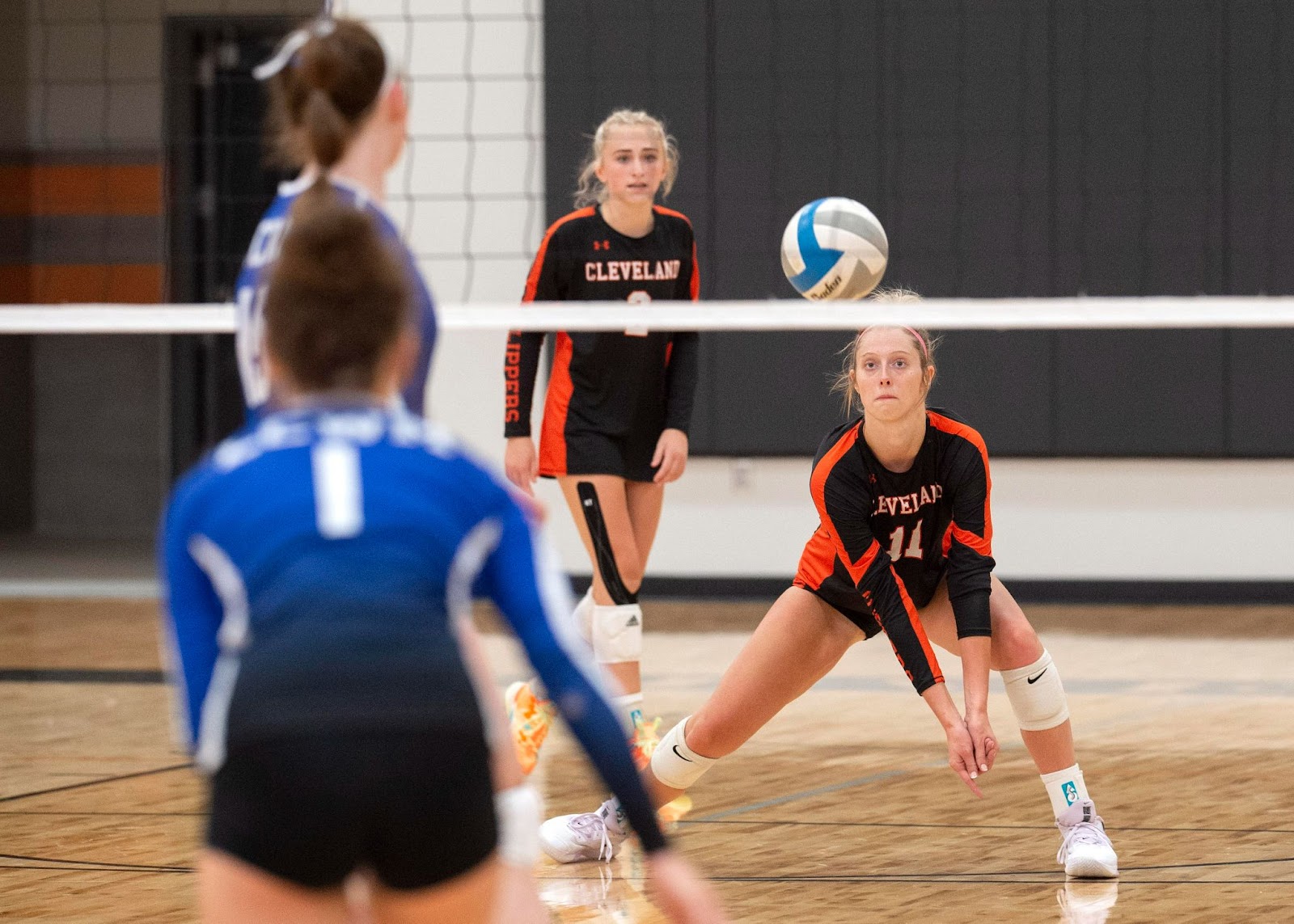 Harley Connor sets up for a bump. Emma Sweere and Ava Hahn on the serve receive. 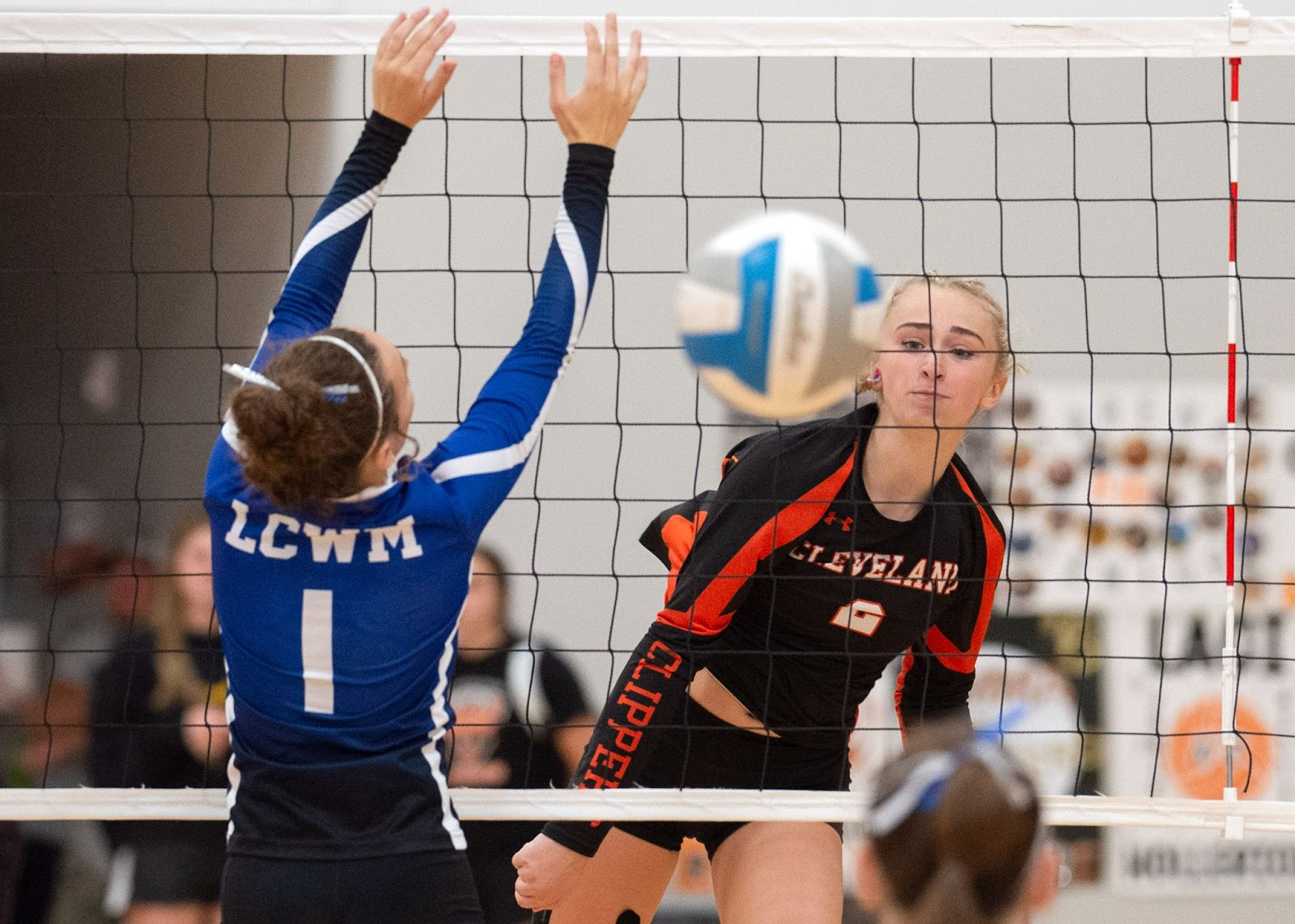 Ava Hahn follows through a hit. 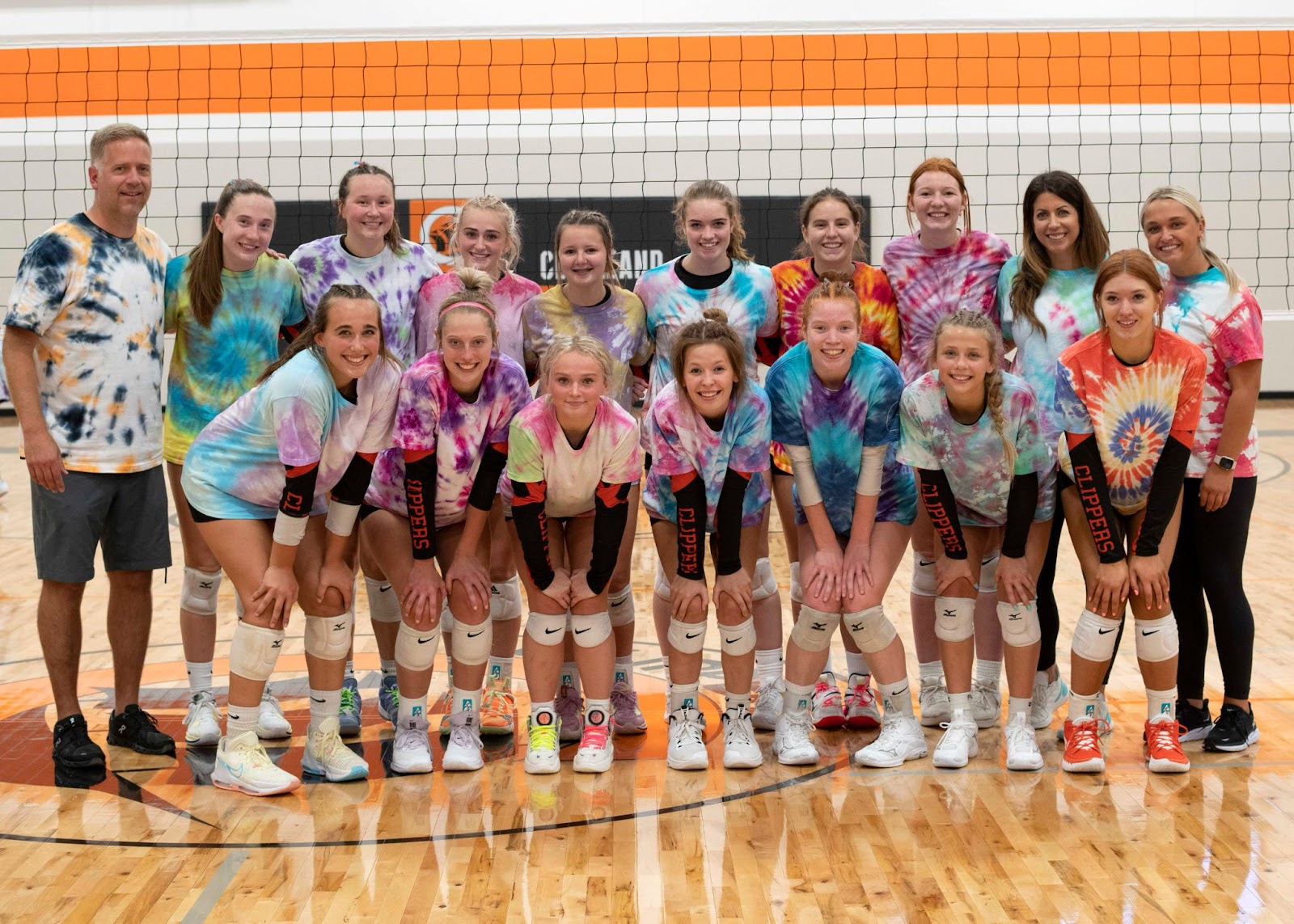 It was tie die night for the Clippers. 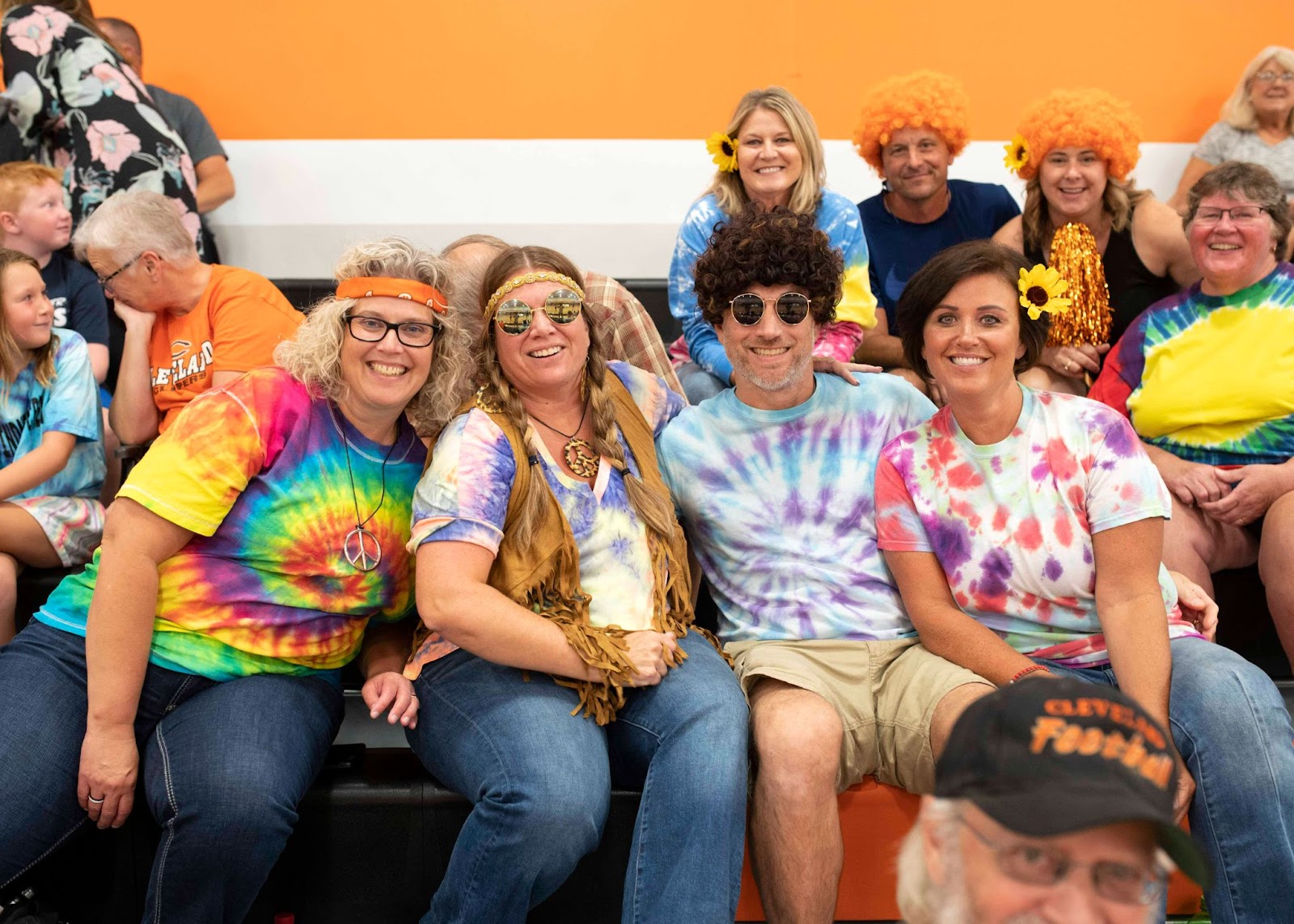 Some parents extended the tie-dye themed night a couple of notches. In front are Holly Connor, Kara and Jeff Sweere and Stacy Hahn. 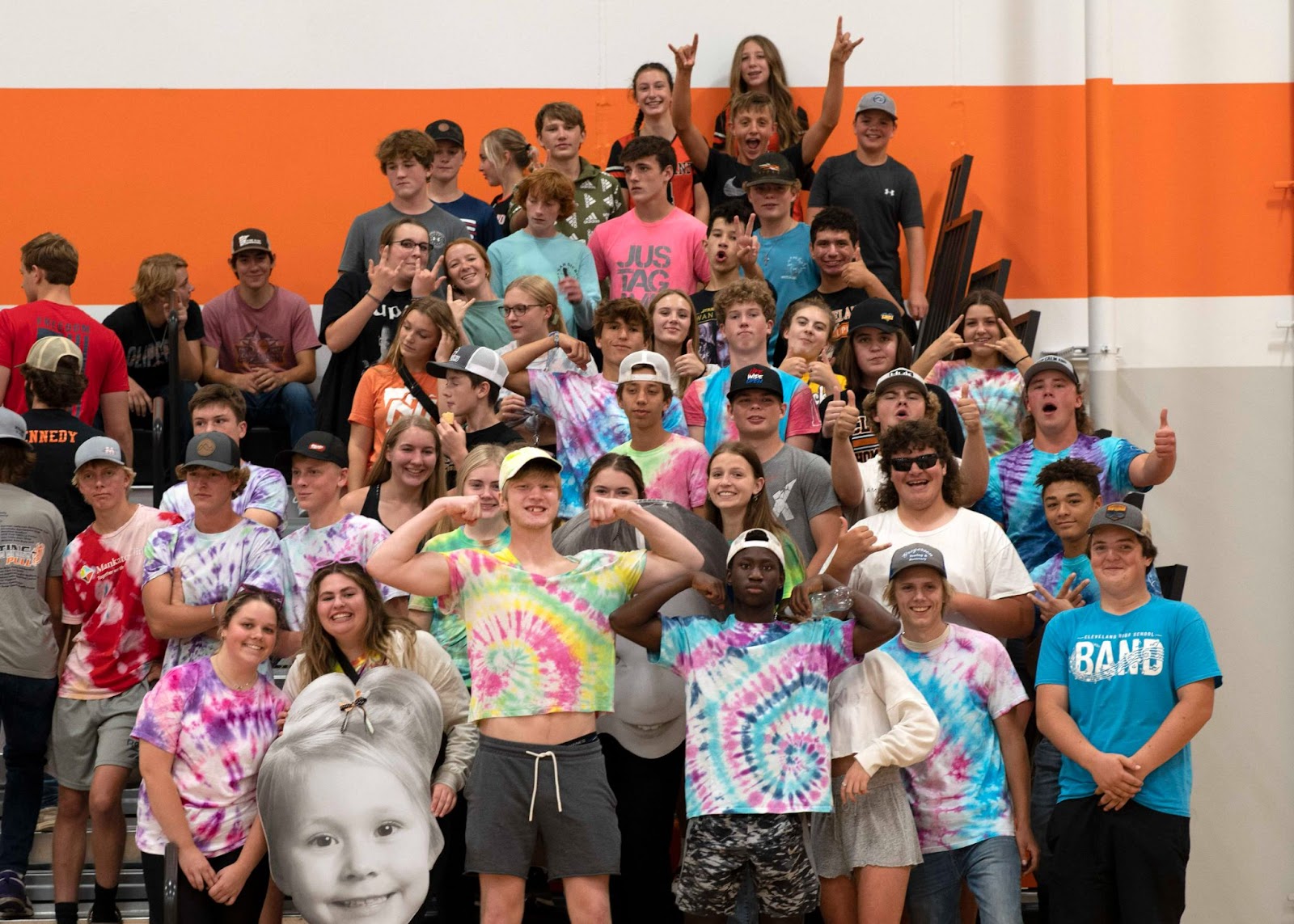 The student section was teeming with peace and harmony…and muscle.