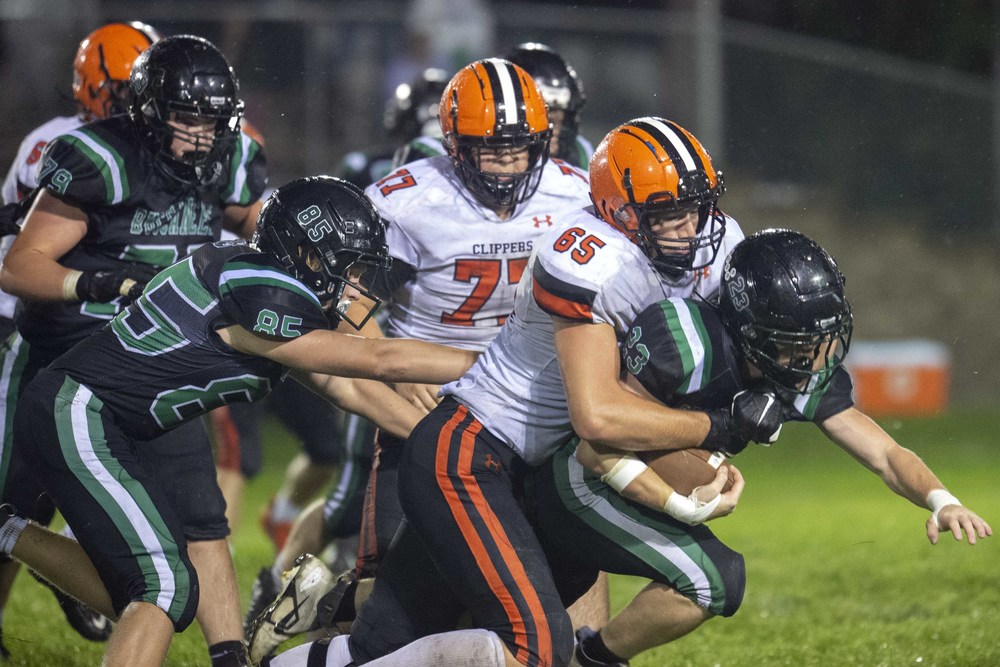 Bucs stop Clippers with same score as a year ago

Looking to avenge last year’s fluke 8-6 loss to Waterville-Elysian-Morristown, the varsity Clipper boys went on the road on Friday.

While the game wasn’t much like it was a year ago, where quarterback Jackson Meyer suffered a season-ending injury and a deflected touchdown catch in the final minutes made the difference, the score ended up the same.

WEM scored early in the second quarter, but the Clipper defense was stellar after that. The Clipper offense found the spark it was looking for in the fourth quarter when sophomore quarterback Blake Lyons completed a series of throws to his eighth-grade brother Carson Lyons.

After two drives deep into Buc territory that ended with turnovers, the elder sibling scored on a keeper, but the PAT pass fell incomplete, and that was the difference.

“We’re just super proud of them,” said head coach Erik Hermanson. “You talk about a team that could have given up right away. It’s pouring rain. They gave up a touchdown. They know they’re young. They’re on the road. They should have given up, and it could have been 30 to nothing. Instead, they figured it out. They took people on. They gave it everything they had being undersized, and the offense came back too.”

Rain fell on the Waterville football field for the first half but subsided in the second half, and that contributed to the momentum swing, Hermanson said.

“The improvement was there. The spark was there at the end. As soon as we had little better weather conditions, you could see that the smaller team was able to what they do better. The rain favored the bigger team; it was to WEM’s advantage.”

The Buccaneers moved the ball 40 yards after the opening kickoff, but Kale Kelley hunted down a pass for an interception and return to the Clipper 43. The Clipper offense sputtered for negative yards, but Henry Strobel’s punt took a Clipper roll, and WEM took over at its 20.

Finally cleared to play after suffering an injury last November, Carter Barto, a 6-5 225-lb junior (above), made a tackle behind the line that contributed to a third and 27 for the Bucs on their ensuing series.

“Carter obviously is a good, strong tackle on offense, but him being there on defense was a huge lift to us with the big plays, the plays for losses,” Hermanson said. “That’s the kind of thing an athlete of his caliber can do.”

With a muffed snap on the punt, the Clippers took over on their 45 but again went backwards before Strobel’s boot to the WEM 40.

Taking their possession into Q2, the Bucs rattled off nine running plays before a 6-yard sprint into the end zone. The PAT run was good too, and the Clipper trailed 8-0 with 7:45 to go until the break.

“They played solid,” said defensive coach Kyle Atherton. “You know as well as I do how young they are, how inexperienced, how green they are. They are learning on the fly. But as well as they played, there were numerous things that they could do to get a lot better. It’s just growing pains. We haven’t had two JV games in the last two years, and one was last week. But we were in it the whole time.”

Facing a fourth and 24 after Lyons got sacked for a big loss, Strobel punted again, but the Clipper defense held up, and the clock expired on the half.

Still struggling on offense, the Clippers punted on fourth and third after the second-half kickoff. Picking up a couple of first downs, the Buccaneers threatened, but Kelley broke up a third-and-five pass, the Clippers limited the run after, and they took over on their own 26.

Minus 10 yards was the result of their next series, Strobel’s leg once again got called to duty, and WEM  started on the Clipper 42. But after a Nick Simonette sack for negative 4 yards, the Bucs didn’t complete their fourth-and 6 pass, and the Clippers took over at their 38.

“We have to stay calm and just keep getting better and better because there are going to be mistakes,” Hermanson said. “You just can’t assume that younger kids are going to know because they haven’t had the experience, not only because they are younger, but because we didn’t have enough players last year, so we didn’t get to play JV games.”

The Clippers finally got the spark they were looking for when Lyons connected with his younger brother Carson for 13 yards. With a Lyons-to-Lyons hookup for 3 more yards followed by a Kelley 9-yard reception, the Clippers were finally on the move.

On fourth and 3, Blake Lyons rolled left, and the sophomore gained 8 yards for the first down. The Lyons/Lyons duo hooked up again, this time for 10 yards, but the Bucs intercepted on the next play and took over on their 4.

With the Clipper D continuing to step up, the Bucs went three and out. The Lyons brothers connected for 9 yards, and the elder sibling ran for 9 more, but the Clippers turned the ball over on a fumble after that.

Making up for their offense, the Clipper defense came up with a sack for minus 9 yards, stopped run at the line of scrimmage, and forced in incomplete pass. After the punt, they started on the Waterville 41 with 4:31 remaining.

While there is a natural rivalry among siblings, there is a synergy too, so Lyons went right to his brother on first down, and the Clippers got 11 yards on a pass interference call. Jaxon Libby rattled off 3 yards on the ground, and Tanner Simonette took a screen pass for 8 yards. Two plays later, Lyons rolled for 15 yards and a touchdown.

Carson Lyons looked to pulldown his brother’s PAT pass in the corner of the end zone, but the area quickly congested, and the ball fell to the turf.

Tanner Simonette intercepted a WEM pass after the kickoff, and the Clippers had 1:32 to try to score from the WEM 48, but a holding penalty was costly, and the Clippers got stuck at third and 27 before the Bucs took over and wound down the clock to preserve the win.

Hermanson said the most growth occurs between week one and week two, and that held true in this game, despite the loss.

“We were able to do a lot more things. Last week we got away with being pretty basic because we had a lot of players who were better than their players. If we wouldn’t have improved as much as we did, I think this would be a lopsided loss. I credit that to a great group of kids and coaches and a good week of practice.”

With 10 keepers for 67 yards, Blake Lyons led the Clipper ground game. Libby had four runs for 8 yards, and Strobel had one run for zero yards.

Barto ended the night with six solo tackles and five assists with three tackles behind the line, but the loss was hard on the junior, especially since he used to attend school at WEM.

“It feels great to be back after being out for seven months. It really does a toll on you sitting out. Although we didn’t win, I did what I wanted to do. Although I didn’t leave with the emotion I wanted to, I came in happier than ever.”

Hermanson said the Clippers will learn from the outing, but their home game against Gibbon-Fairfax-Winthrop on Friday will be a test.

“GFW is a super, tough team. Their top 30 guys are going to be bigger and stronger than us, but let’s see how better we can do.” 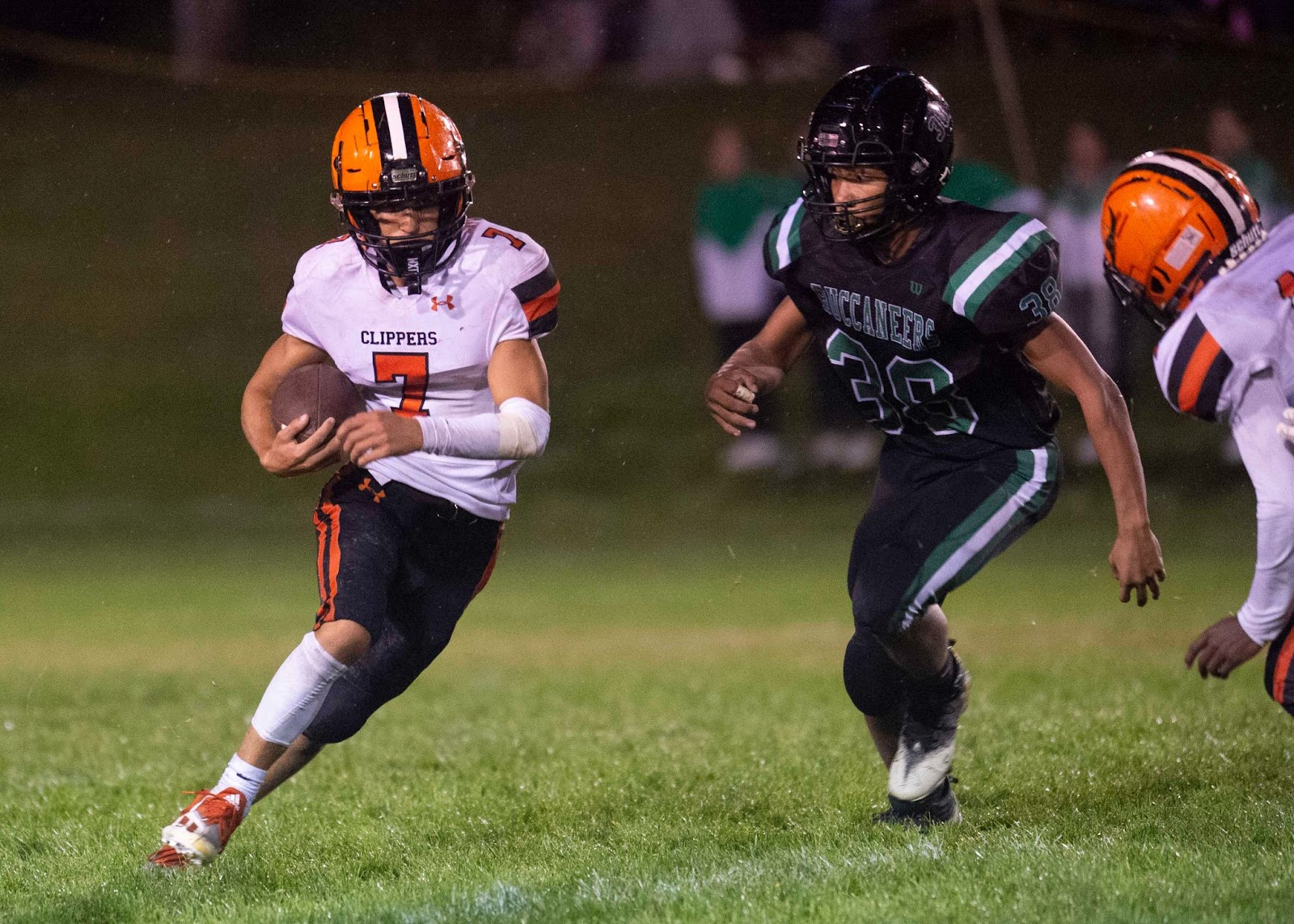 Kale Kelly on the run. 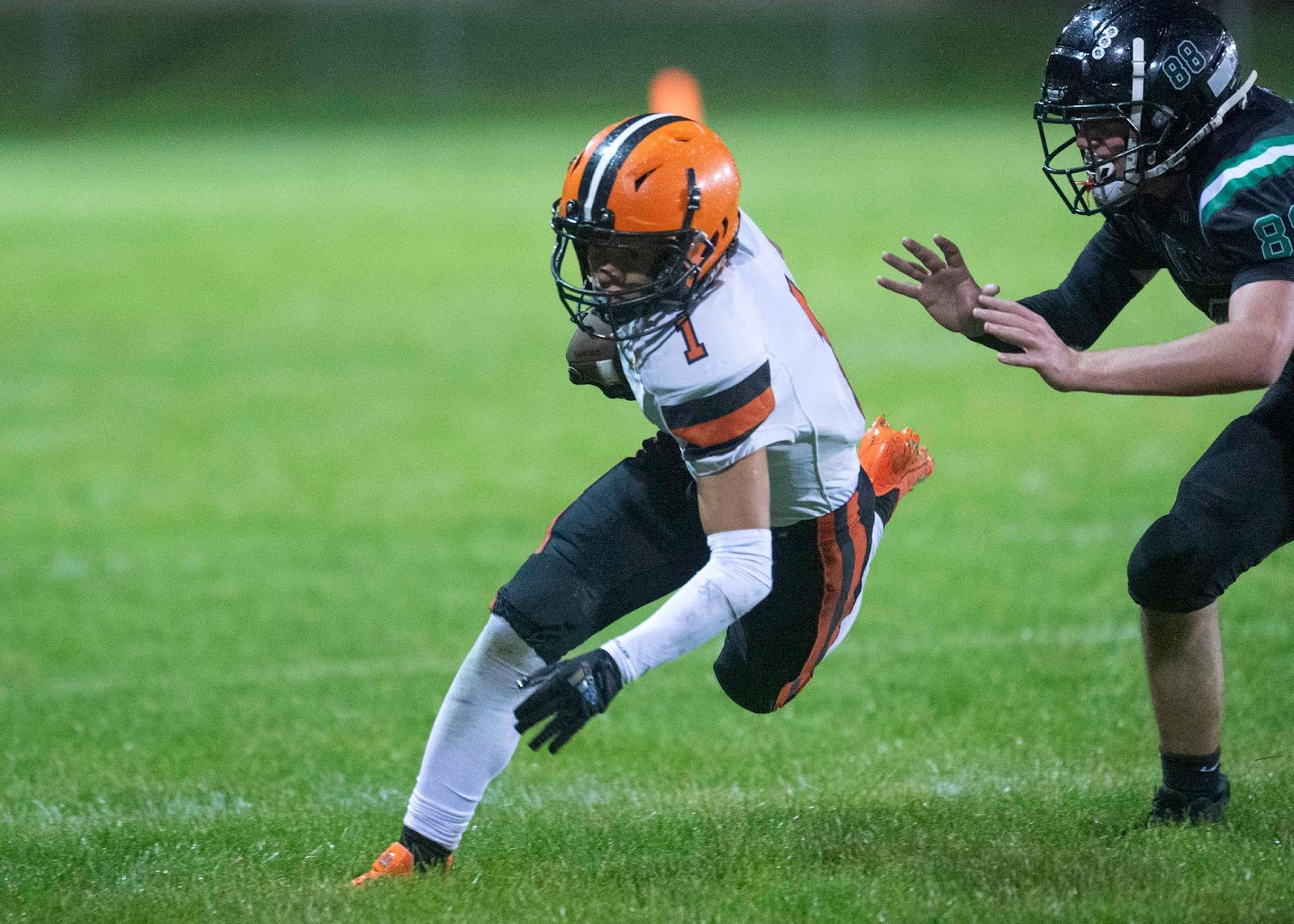 Carson Lyons runs by a defender after a catch. Eighth grader Tanner Simonette gave the Clippers another chance after an interception. 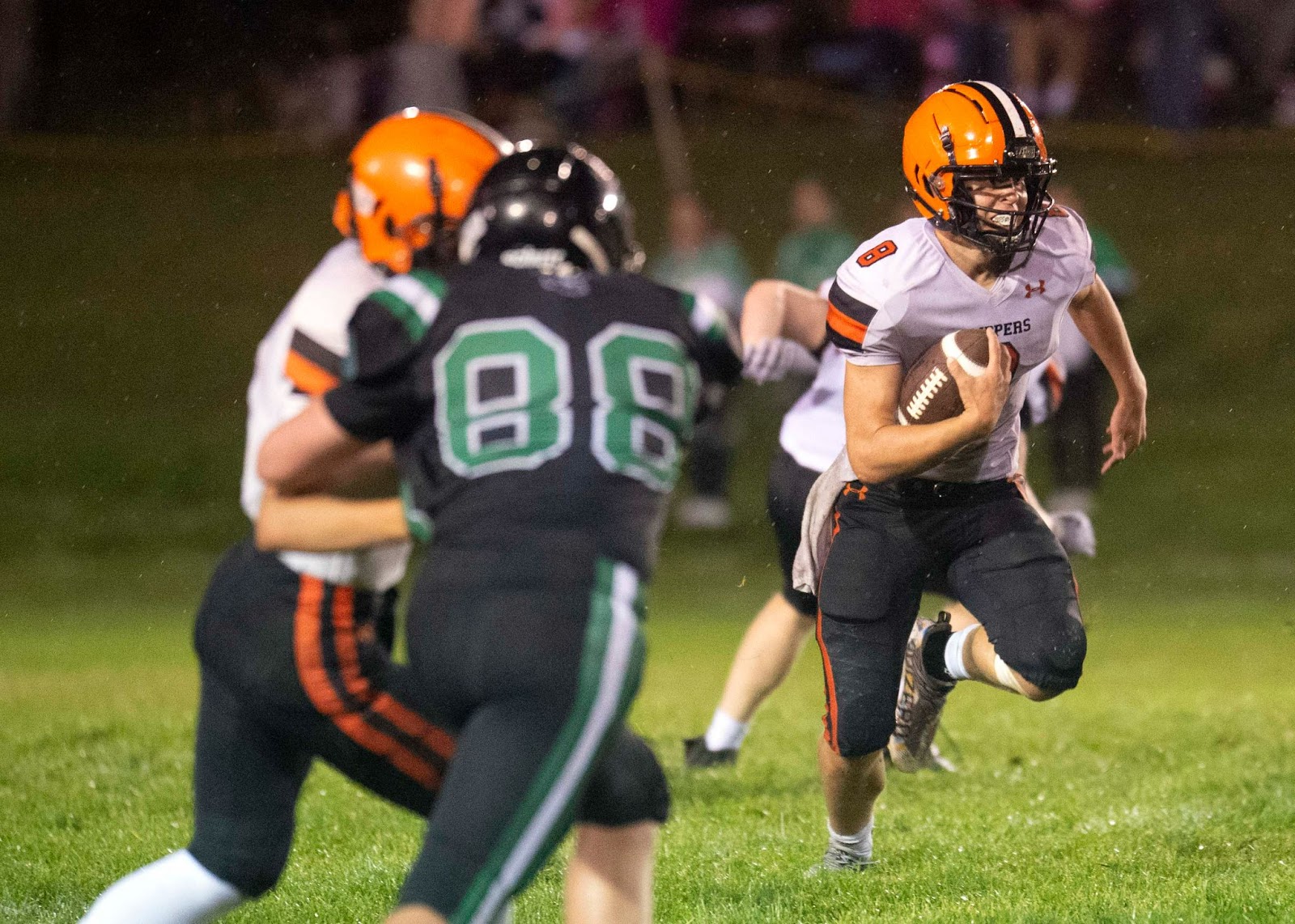 Blake Lyons had some key runs in the Clippers’ long drives late in the game that helped open up the Clipper offense.