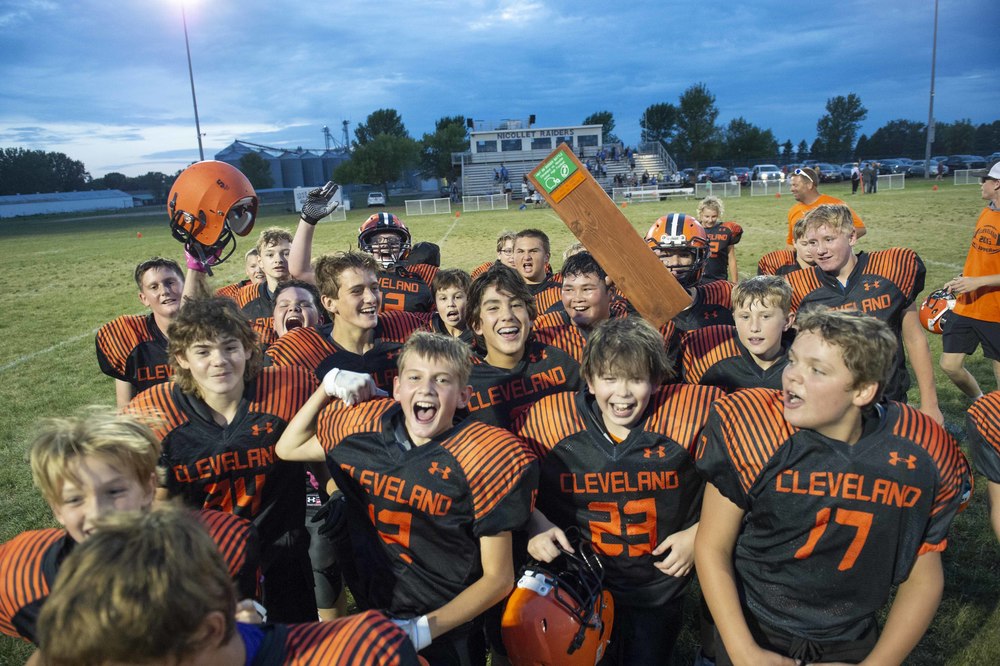 Cleveland 22, Nicollet 20 on Thursday was a double comeback for the junior high boys.

For one, it was a quick rebound from an ugly debut three days earlier when Waterville-Elysian-Morristown ran all over the Cleveland football field.

Secondly, with a defensive stop with 56 seconds left followed by a Cleveland touchdown and extra point, the Clippers came back from what seemed like a hopeless place for a triumph.

“We had a rough start, but we’ve been working hard and practice, and the kids believe in themselves,” said head coach Rich Kern. “It was a game where the offense and defense both played hard, and I think just rotating guys in, giving guys breaks during a warm night…all together it was a good experience for us to get a win and get some positive play.”

Nicollet scored a touchdown early and completed the PAT to go up 8-0. The Clippers finally answered late in the first half when eighth-grade quarterback Sam Ternes scored on a keeper, but the Raiders thwarted the PAT to keep a 2-point lead.

After the second half kickoff, Ternes took to the sky, connecting with his big receiver, Garrett Heldberg. The seventh grader leaped up in a crowd for catches of 25 and then 20 yards.

“We aired it out to get him some plays,” Kern said. “They were kind of jump balls.”

From the Nicollet 5, Aiden Domras plunged for a yard before eight grader Wyatt Williams ran right for the touchdown. With Heldberg pulling down a Ternes PAT pass in the end zone, the Clippers were up 14-8.

But the Raiders snapped right back with the next two touchdowns.

After the Clipper kickoff, Wyatt Krenik made an open-field tackle at the Clipper 30 to prevent a touchdown, but it only delayed the Raiders, and they responded with a 17-yard toss and then a catch and run to the house on fourth and 16. The Clippers stopped the PAT run, but it was all even at 14 early in the fourth quarter.

The Clippers couldn’t find their offense after the ensuing kickoff and had to punt. Two snaps later, the Raiders came up with another big play, this time a 53-yard catch and run for another TD. Once again, the Clippers foiled the PAT run, but they trailed 20-14 with 3:35 left in the game.

Taking over on their 44 after the kickoff, the Clippers quickly went to work. Heldberg grabbed two more Ternes passes, this time for 21 and 15 yards. From the Nicollet 20, Ternes wove his way to the 8, but an interception in the end zone put an abrupt end to the drive, and Nicolet took over on their 22 with 1:22 remaining.

The Clippers held their opponent to short gains on the first two plays and stopped the clock with time outs. On third down, the Raider runner ran out of bounds to bring up a fourth-and 3 situation. The Raiders decided to go for it, but the Clipper defense held fast again, only allowing a yard, and the orange & black nation took over on the Raider 16.

“We told them on defense, you guys hold them,” Kern said. “We’ll have some timeouts left and have a few shots.”

Ternes took the first snap all the way to the Nicollet 3.

“It was a roll right option, where he could either run, pitch or pass,” Kern said. “Sam had a few of them tonight. He had some good runs and reads on those.”

From there, eighth grader Jackson Shouler ran off the right tackle for the TD, and classmate Aiden Domras ran the same route for the PAT and a 2-point Clipper lead with 7 seconds remaining, not enough for the Raiders to get past the kickoff.

“I told him at the end, we’re just going to do hard nose,” Kern said. “We don’t want to cough up the ball again on a pass and interception, so we told them 'let’s stick to our bread and butter and do some dive plays.' We just went off our big guys. Hats off to those guys. It was straight forward, and sure enough, we stuffed two in. I’m just proud of the kids because they work hard.”

The win against their Highway 99 rival lets the Clippers keep the Boarder Battle trophy (above) for the second year in a row.

On Monday, the Buccaneers took the opening kickoff all the way for a touchdown and never looked back in a 40-6 drubbing.

Returning a punt and scoring on the first play after a turnover on downs, WEM was up 22-0 early. Another first play run, this time for 60 yards, put them in front 28-0.

With his team down 34 to zippo, Ternes weaved for 35 yards and the Clippers’ only touchdown. The PAT pass was incomplete.

The Bucs punctuated the win with another kickoff return for a score.

The junior high boys return to action on Monday when they travel to Winthrop to take on GFW in a 4:30 game. 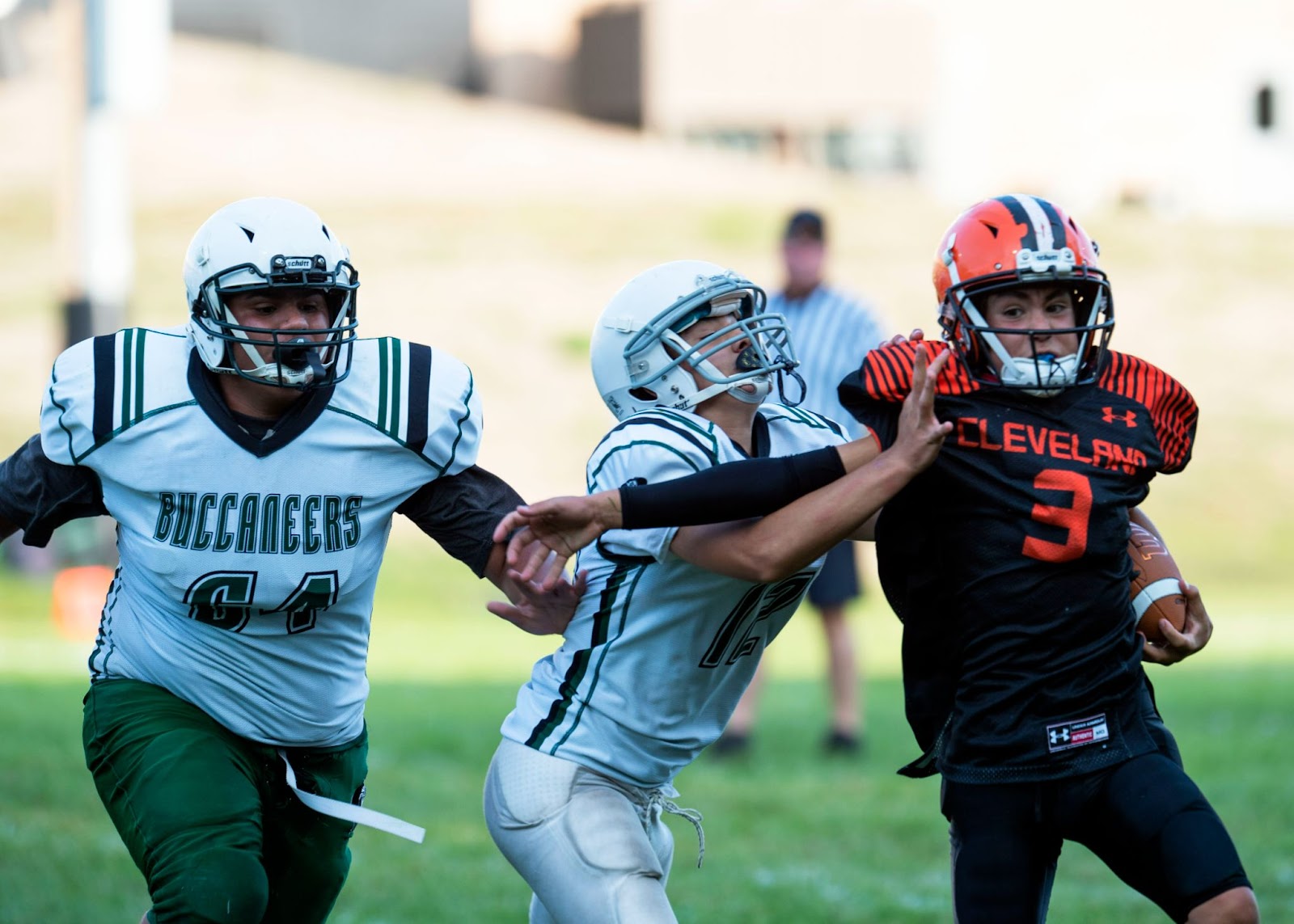 Quarterback Sam Ternes matches up with a WEM player. 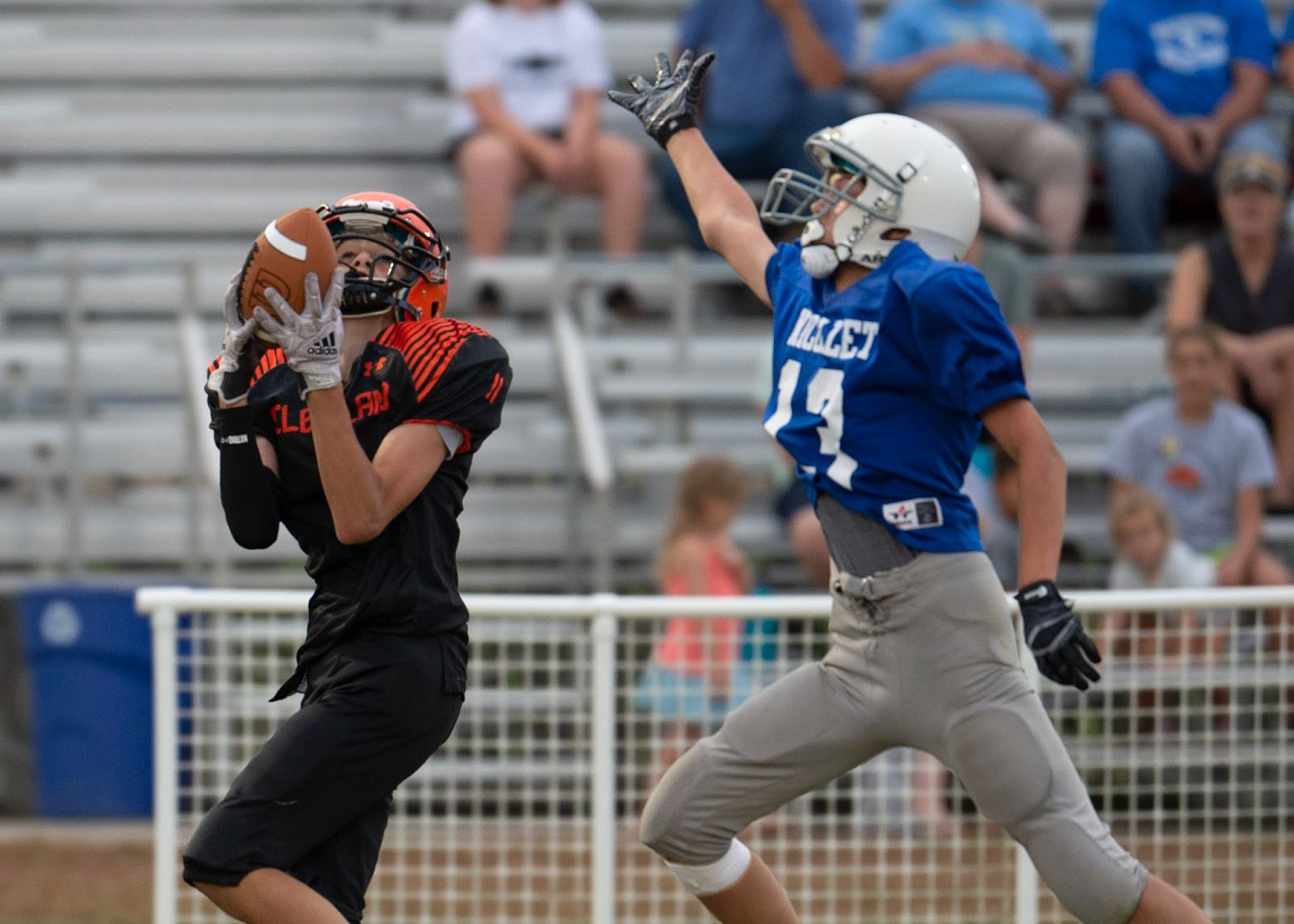 Garrett Heldberg pulls down a pass in traffic. It was one of a half dozen nice catches the seventh grader made against Nicollet. 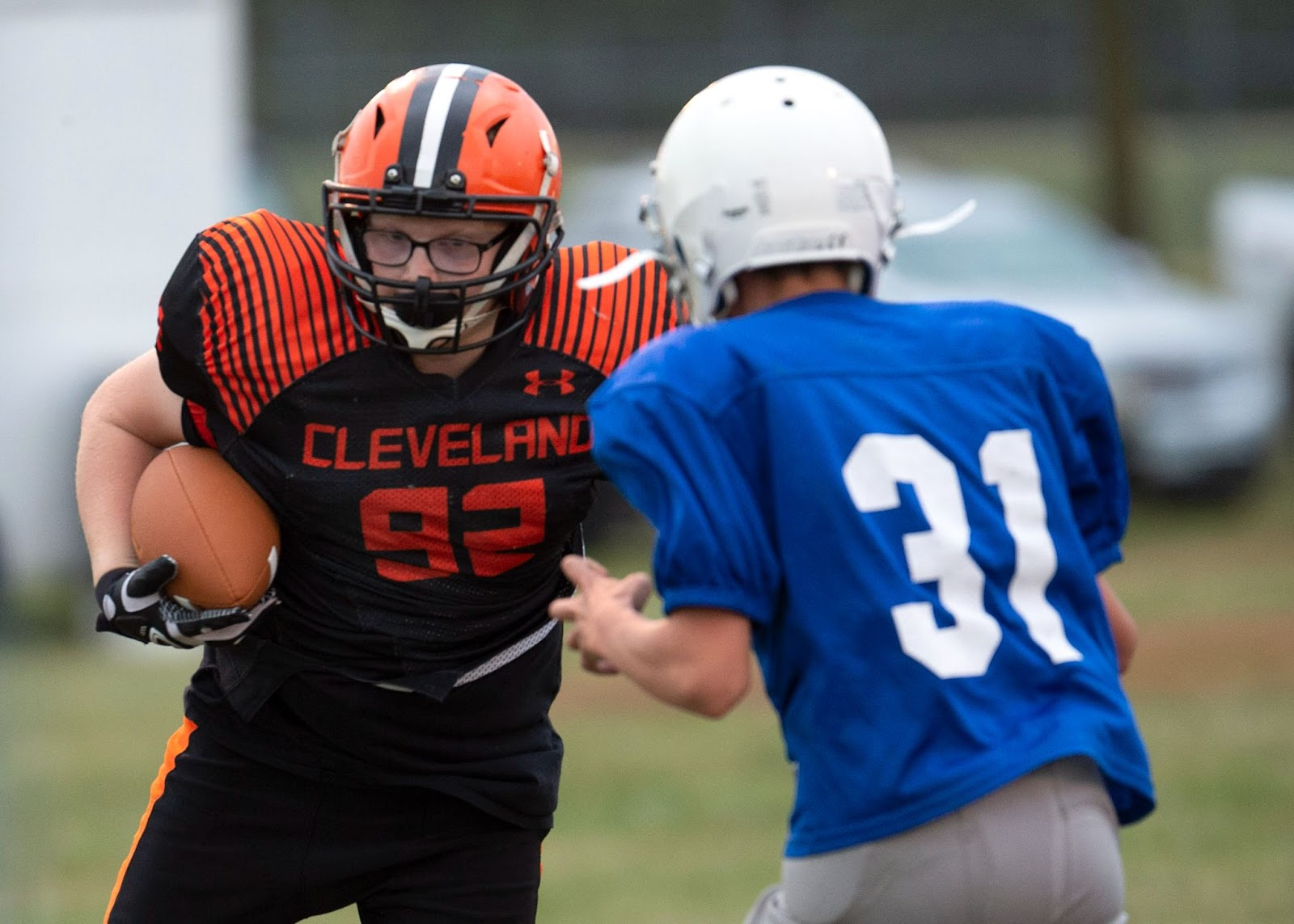 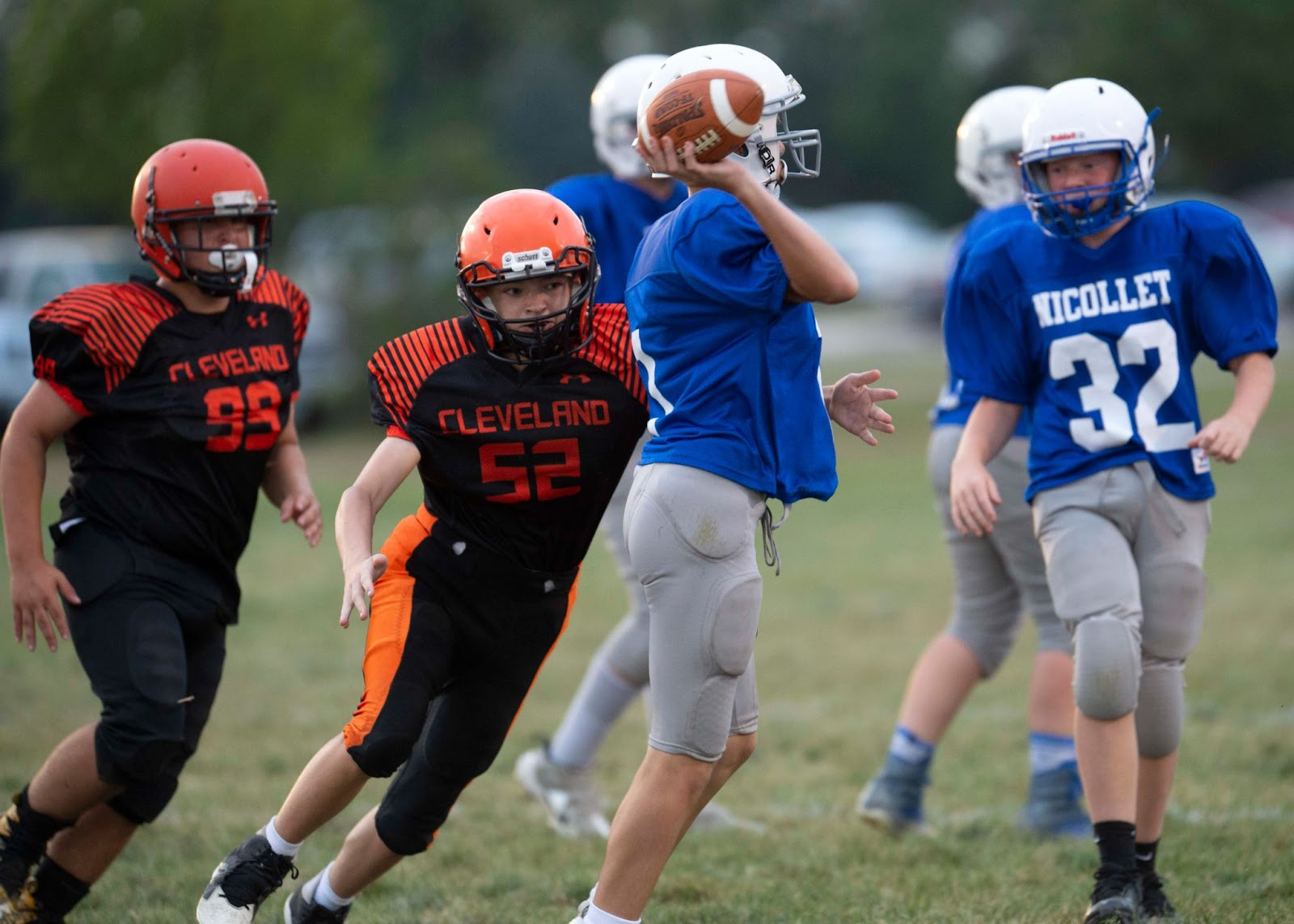