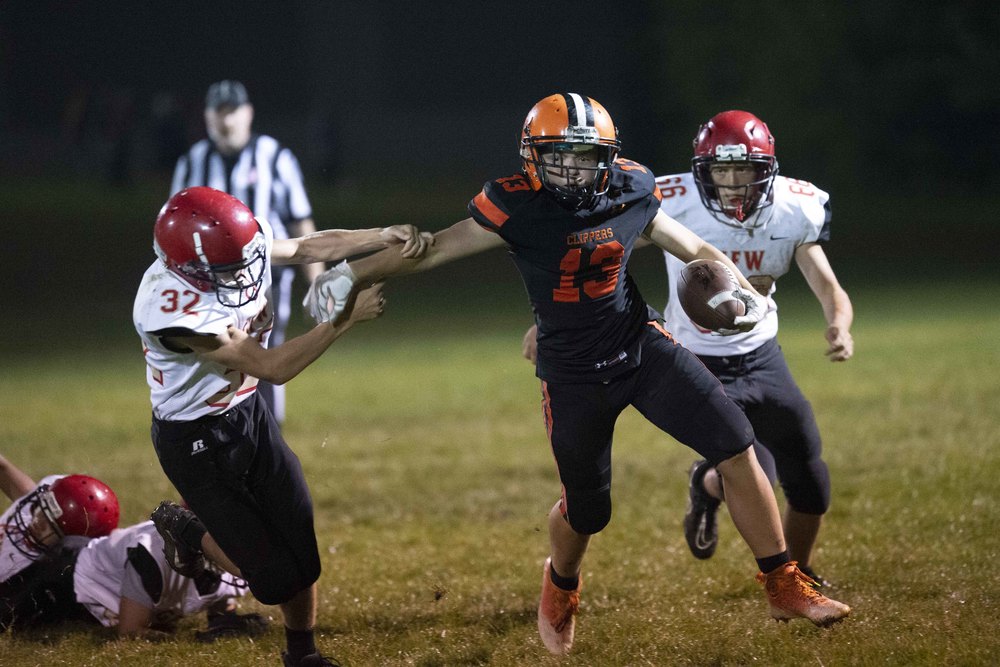 Running its typical deceptive wishbone on Friday against the varsity Clippers, Gibbon-Fairfax-Winthrop even bewildered the referees at times.

Confused who had the ball early in the fourth quarter, the line judge saw a player go down, thought he had the ball and tooted his whistle. Meanwhile, the real ball carrier, running down the opposite side of the field, sprinted some 30 yards to the finish line.

Thunderbird fans weren’t happy the touchdown went off the board due to the mistaken play stoppage, but it didn’t matter a whole lot as a few plays later their team took the ball into the end zone, and with the point-after pass, GFW led 36-0 with 7:19 left in the game.

“It’s a tough offense for us to go against, especially with a couple of guys out there on defense who have never played football before,” said head coach Eric Hermanson. “It’s hard enough for our players who have been playing football their whole life. We put guys out there for their size so they won’t get beat up, but it is their first year of football. We’re not down on them at all. We just have to keep building.”

The Clippers finally manage to score after Strobel returned the kickoff to the Cleveland 35. Freshman Caleb Possin (above) boomed for 29 yards.

“Caleb Possin is one of the best natural running backs that we’ve had,” Hermanson said. “Aggressiveness, great vision, athletic ability, and he just glides out there. It doesn’t even look like he is running, and he outruns everybody. He’s going to be a special player. Another one is Tanner Simonette on D tonight. He played outside linebacker better than any eighth grader should have against that team. He really showed a lot of toughness too.”

After the next snap, Bode Bartell hauled in a 13-yard Blake Lyons toss. From there, Lyons went to his brother Carson Lyons for 9 yards, and Possin dove for two more.

“Bode is a great receiver, he just doesn’t have the size. Same with Carson,” Hermanson said. “They’re eighth and ninth graders. When they are playing against guys their own age, it’s going to be no contest.”

After Possin dove for 2 yards that took the Clippers to the GFW 7, Blake Lyons found Bartell at the 1. The freshman dove across the goal line for a score. The Thunderbirds stopped the PAT run, but with 3:07 left until the final whistle, the Clippers got on the scoreboard.

Up until then, a 42-yard kickoff return and a 49-yard punt off the foot of Henry Strobel were all the Clippers had for their highlight reel.

On a pass to a receiver all alone in the middle of the field, the Thunderbirds scored in the series after the opening kickoff. The Clipper defense stopped after the O team punted, but GFW rattled off runs to cross the goal line with 7:12 left in the first quarter. The Clippers stopped the PAT run but trailed 14-0.

The half went scoreless after that. The Thunderbirds drove almost to the Cleveland-Immanuel Lutheran goal line late in the second half, but the Clipper defense stopped the Thunderbirds on fourth and a yard.

Still struggling on offense, the Clippers didn’t do much on the series after GFW kicked off to start the second half. Taking over on the Clipper 36 after the punt snap flew over Strobel’s head, GFW plunged in from the 1-yard line. They fumbled on the point-after run but extended their lead to 20-0.

Later in the half, after Strobel’s long punt with a holding penalty tacked on, the Thunderbirds started on their own 6 but came up with a 62-yard catch and run for a touchdown. With the PAT run, they pulled up 28 to 0.

The Clippers started to get their offense in gear after the ensuing kickoff though. Blake Lyons connected with his brother Carson for 30 yards, but GFW intercepted on the next play to halt the uprising.

“We only had one turnover,” Hermanson said. “We took way better care of the ball than last week. We stressed that and discipline. Last week we had a lot of offsides. This week none, and we induced them to jump. We stressed that in practice, and the kids took it to heart."

Possin also had five carries for 39 yards. Blake Lyons kept the ball six times but was held to 8 yards. Hastings had three caries but only picked up a yard. Jackson Libby rushed twice for a total of 3 yards.

“We know that if we keep practicing the way we are, we are going to keep getting better and better,” Hermanson said. “The effort, the attention to detail, trusting all the coaches…it’s just Cleveland football. I know we’re in a little down period lately because of lack of numbers, but if people stick with us for a couple of years, they are going to see that we’re doing it right. And, when we play teams more are size, we’re still going to have a lot of success this year.”

The Clippers will have their hands full again next week when they travel to state-fifth-ranked Lester Prairie. The Clippers had a close game at home against the Bulldogs during the regular season but fell hard in their playoff at Lester Prairie game due to injuries and blocked punts.

Their senior running back started four years in a row and was won the conference underclassmen award for three years in a row. Taking care of the ball as they did against GFW will be key to keeping in the game, Hermanson said. 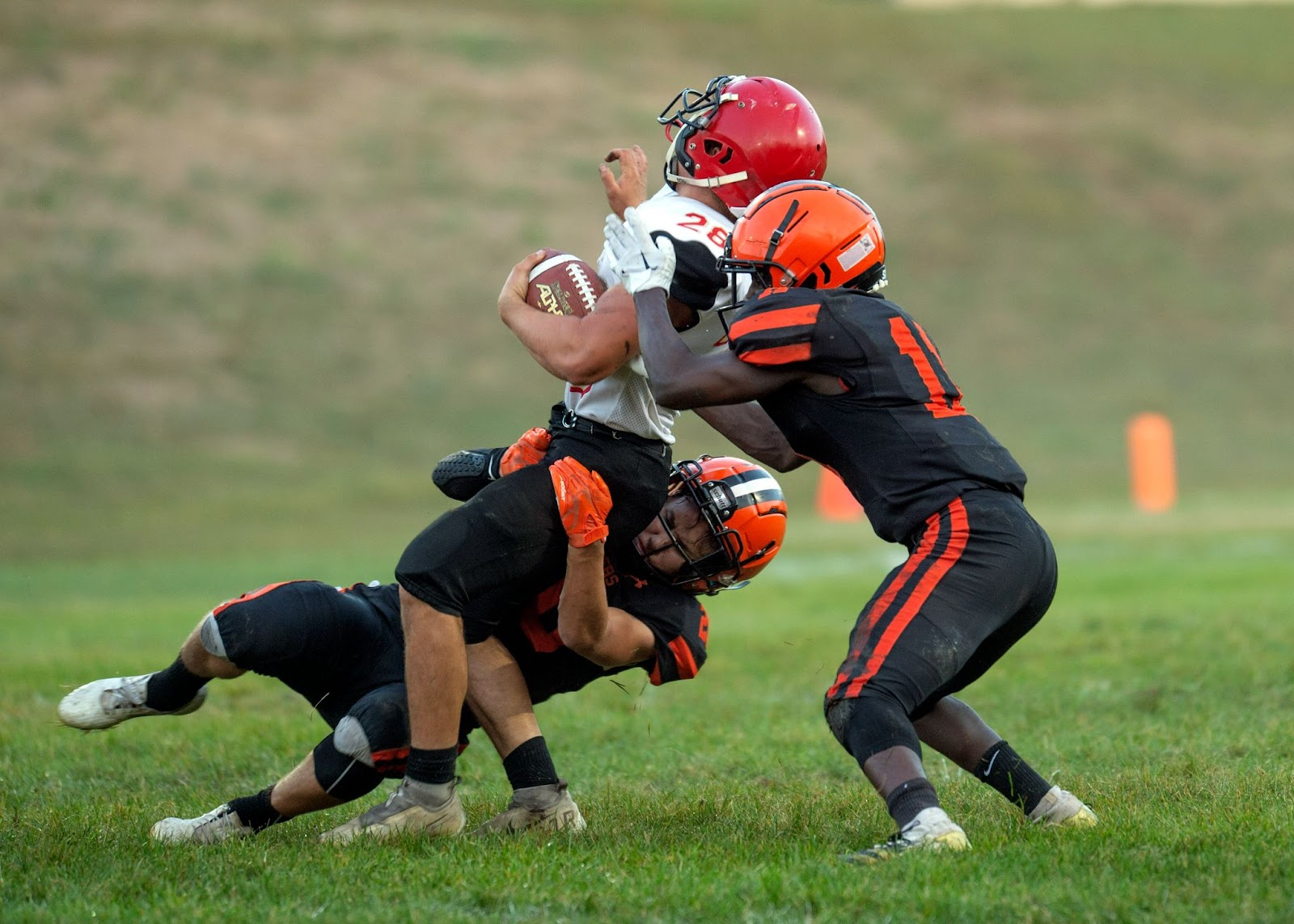 Braden Hastings and Henry Strobel corral a GFW back that got through the Clipper defense. 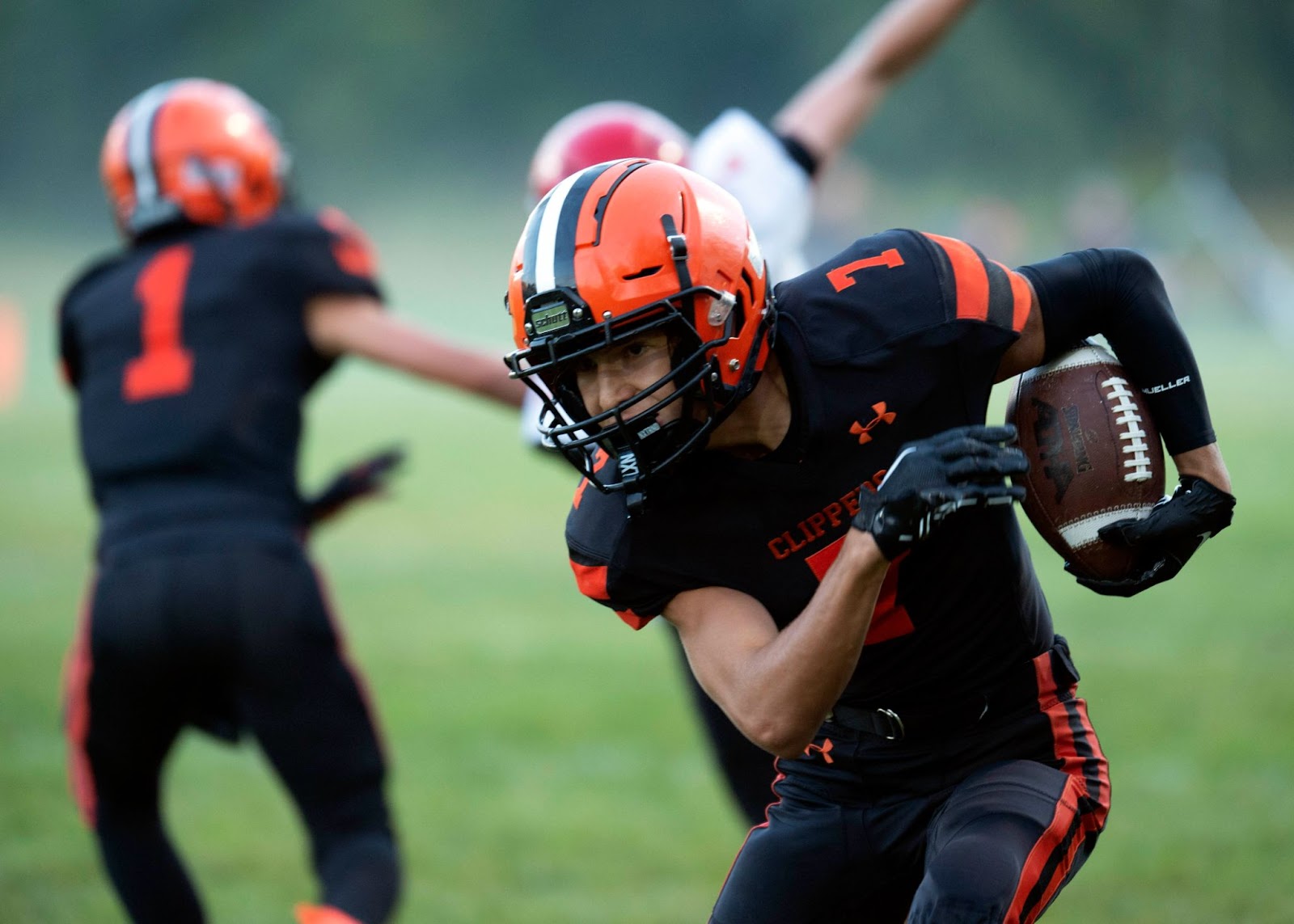 Kale Kelley on the run. 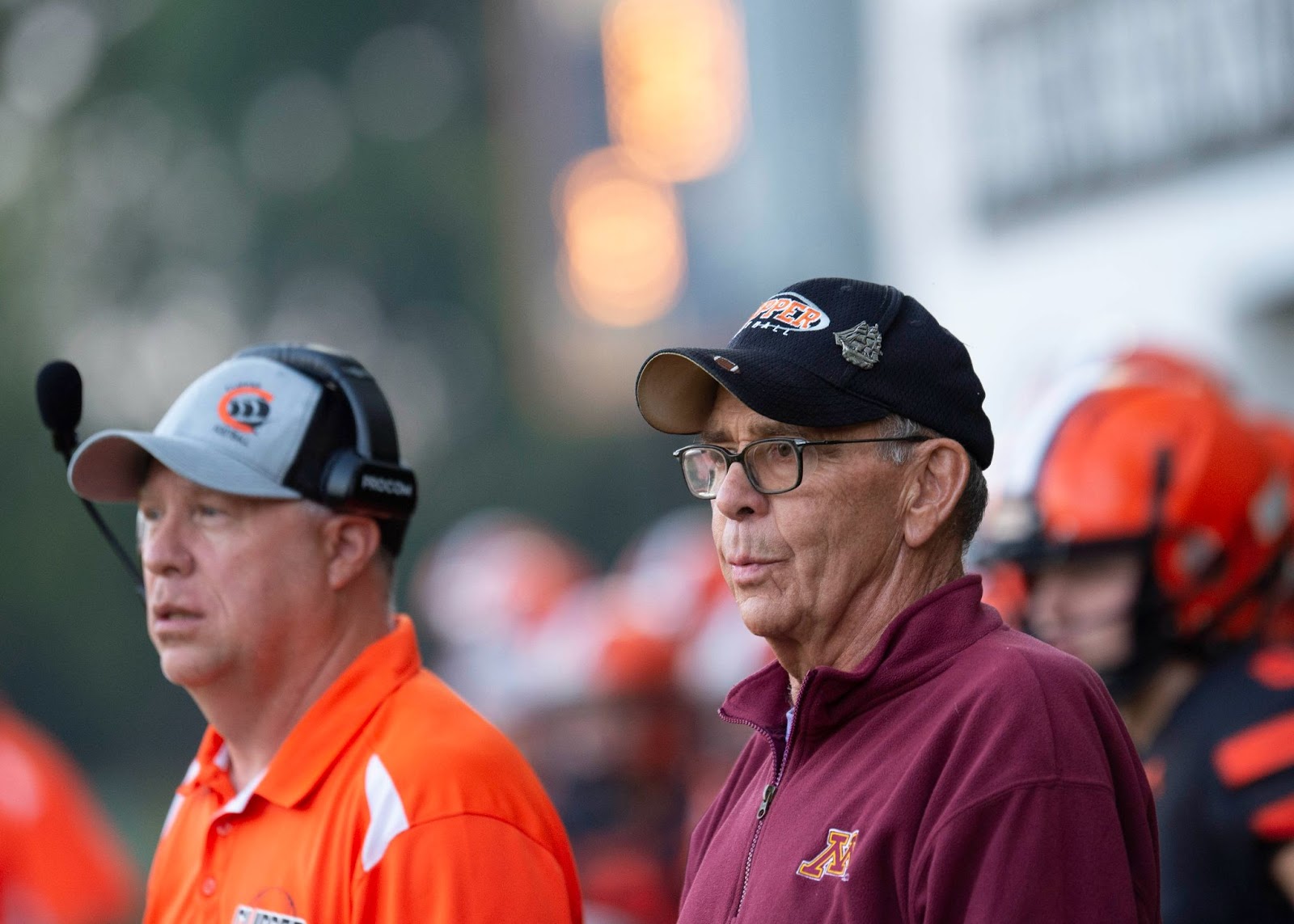 Dave Krenik made a visit to his namesake field. 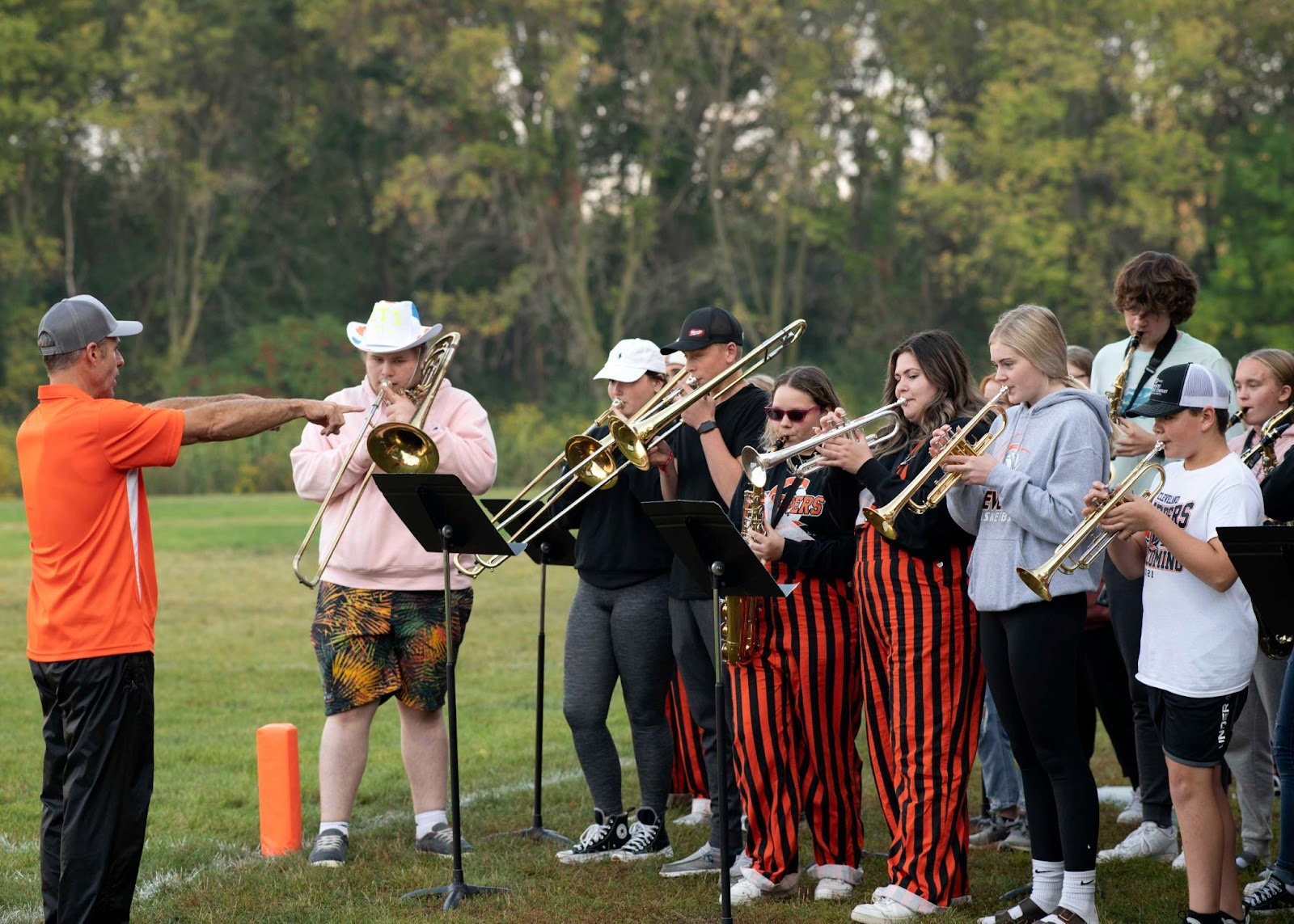