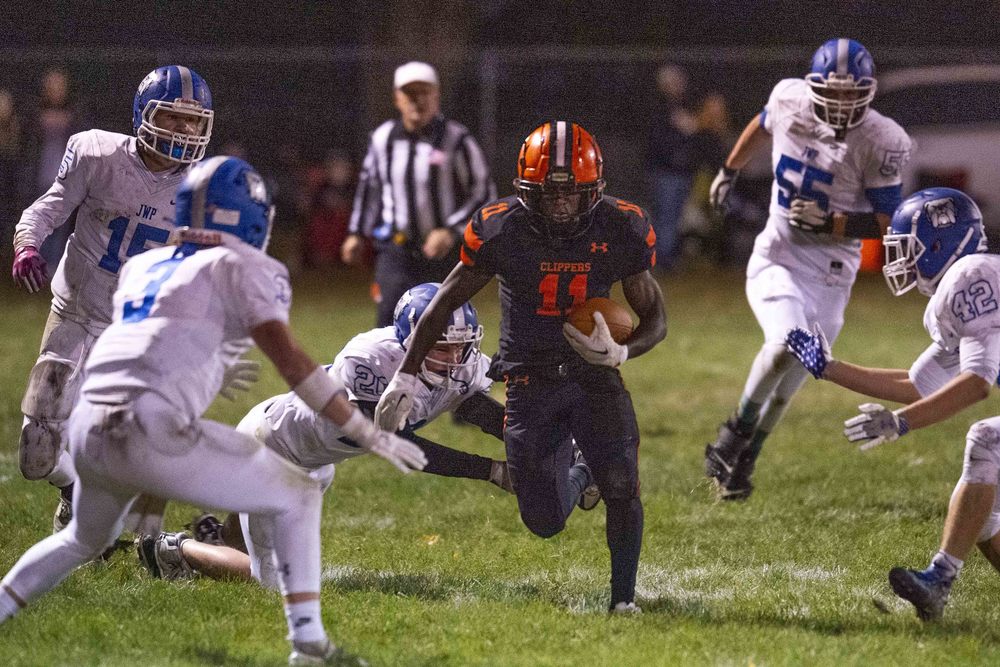 JWP came to town on Friday and spoiled the Clipper’s homecoming with a 20-0 victory.

The Clippers have managed the Bulldogs the last couple of years, not winning decisively but leaving the Janesville turf with triumphs. The tide turned on Friday. The Bulldogs last beat the Clippers in 2019 on the Le Center field.

“It’s heartbreaking because there’s no team we’d rather beat,” said head coach Erik Hermanson. “It’s our biggest rival. We understand that, but it was that upper level of desire that they had because they really wanted it. It wasn’t as if our kids didn’t play hard. It wasn’t as if they didn’t try hard, especially the 10th and 11th graders played their absolute hearts out. Blake (Lyons) and Gabe (Sullivan). I just feel so bad for them that they don’t have more success.”

Driving 78 yards after the opening kickoff, the Bulldogs ran 22 plays that chewed up the entire first quarter and a minute and 11 seconds of the second quarter too before scoring on a 6-yard pass in the end zone. The Clippers stopped the point-after run.

“JWP’s line played all the JV games last year and all the varsity games too, so they have a lot of experience,” said Hermanson.

The Bulldogs scored again in the third quarter on a 79-yard drive capped off by a 3-yard run. With the PAT kick, the were up 13-0. Their final touchdown came in the fourth quarter on a 73-yard drive with a 13-yadr run across the goal line. Their PAT kick went through the uprights for the final point.

With only four first downs—compared to 19 by the Bulldogs—the Clipper offense was anemic even though they turned the ball over just once.

Lyons was successful in nine of 20 passing attempts for 53 yards. He got picked off once. Henry Strobel had four catches for a total of 32 yards. Carson Lyons hauled in two of his brother’s throws for a dozen yards. Kale Kelley caught one pass for 4 yards, and Tanner Simonette caught one pass for 9 yards.

The Clippers ground game didn’t fare much better. Blake Lyons led the effort with six keepers for 17 yards. Strobel (above) rushed three times for 14 yards. Braeden Hastings had one carry for 2 yards, and Jaxon Libby had one carry for 1 yard.

Sullivan led the defense with six solo tackles and 15 assists. Blake Lyons had four solos and six assists and recovered a JWP fumble.

Despite the loss, the fifth in a row, Hermanson said the Clippers are having a successful season, just not recordwise.

“I just hope they keep working and the town doesn’t give up on us. I know if everybody stays behind us, this could be a special group of kids. I feel bad for the seniors knowing that it’s been such a hard year playing with the younger kids, but people don’t realize it’s such a joy to go to practice every day. They improve, they learn, they want to be coached. They do some special things that don’t show up on Friday because they are outmatched numberwise, sizewise and agewise.”

The Clippers travel to Glenville on Thursday to take on Alden-Conger/Glenville-Emmons. The middle-of-the-pack Knights have beaten Wabasha-Kellogg, WEM and USC but lost to GFW, Mayer Lutheran and Lester Prairie. 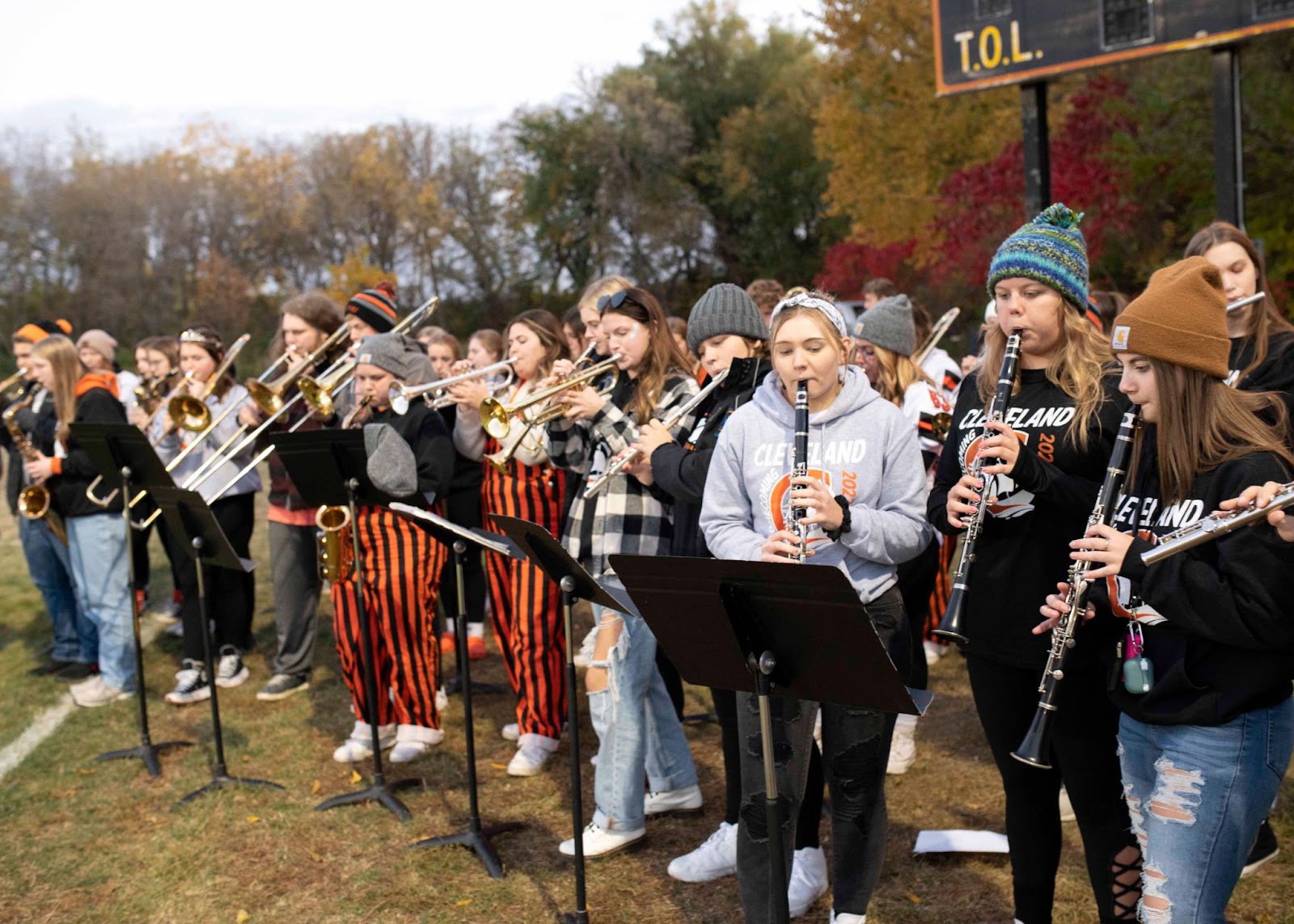 The Pep Band was on hand to add to the homecoming atmosphere. 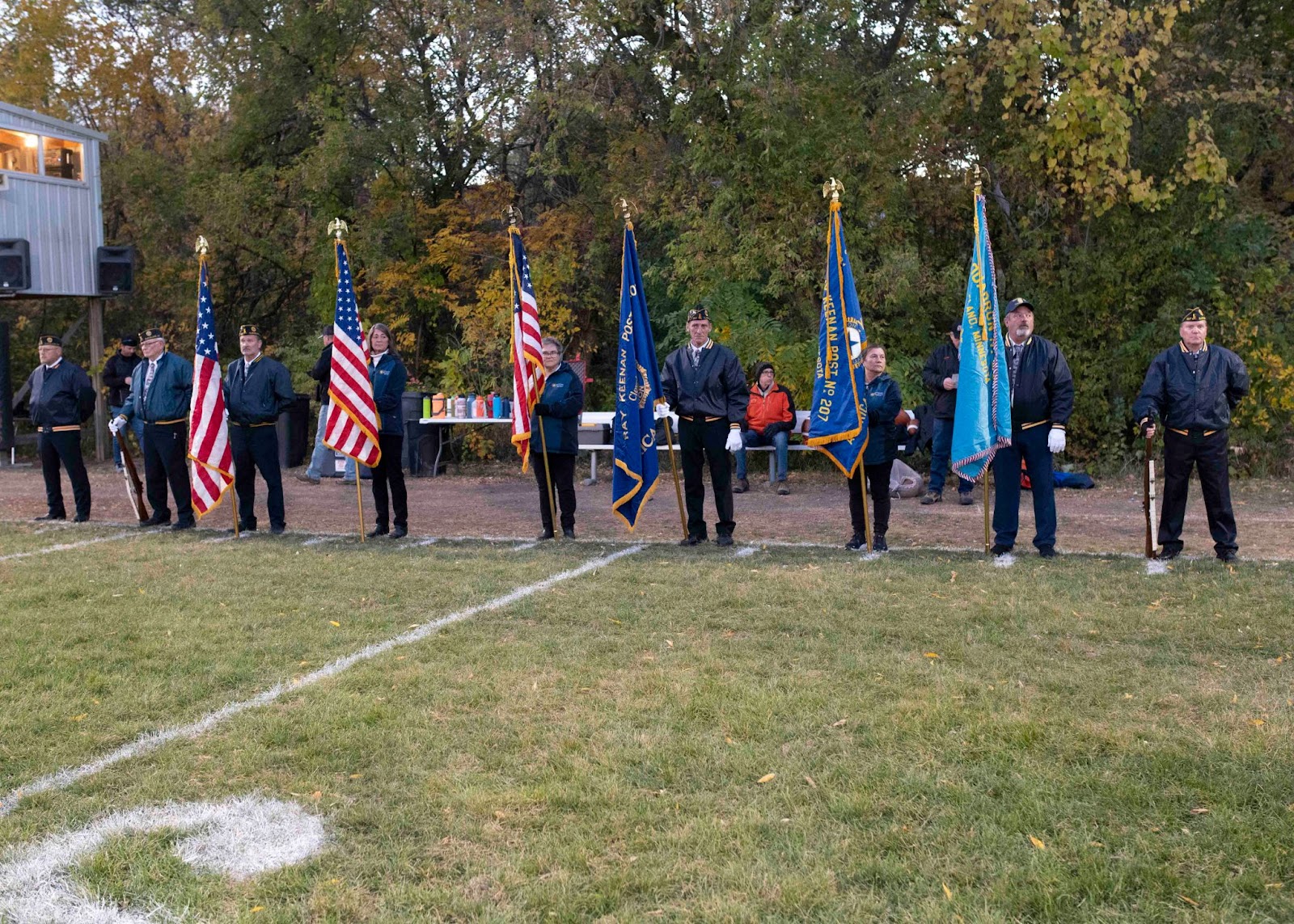 As is tradition, the Cleveland Color Guard presented the flag. 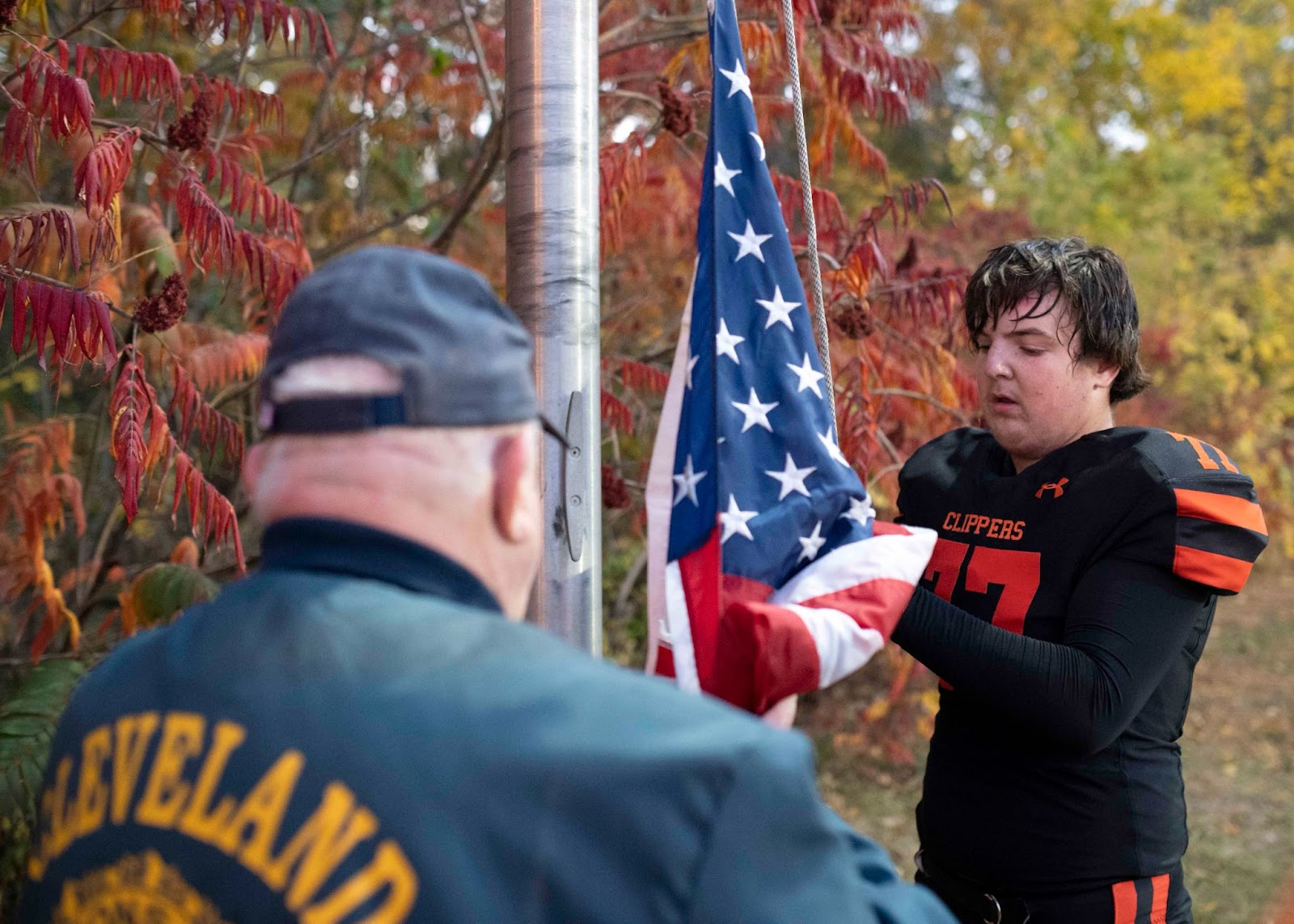 Senior Jack Voit hoisted the flag during the National Anthem. 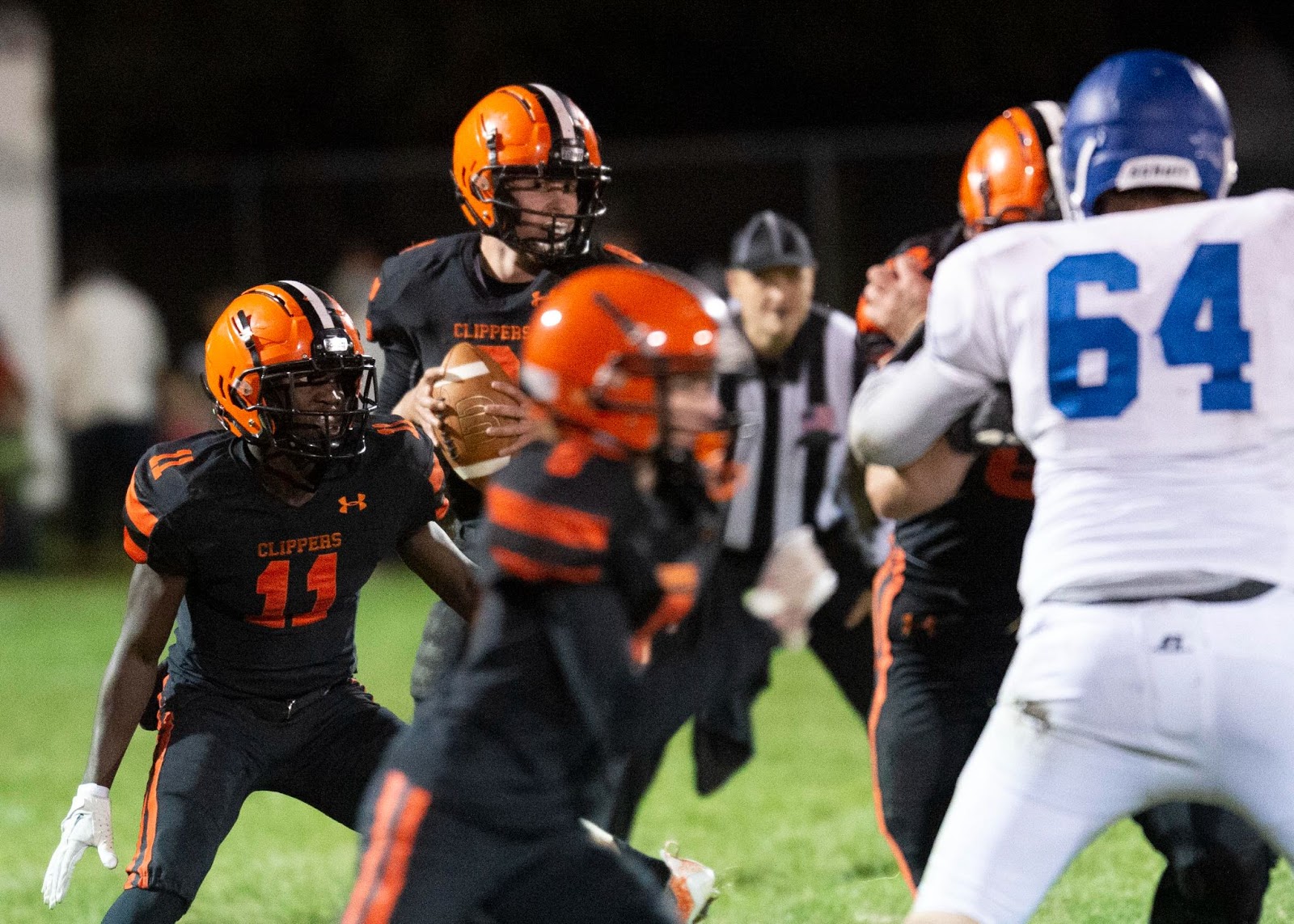 Blake Lyons goes back for a pass. 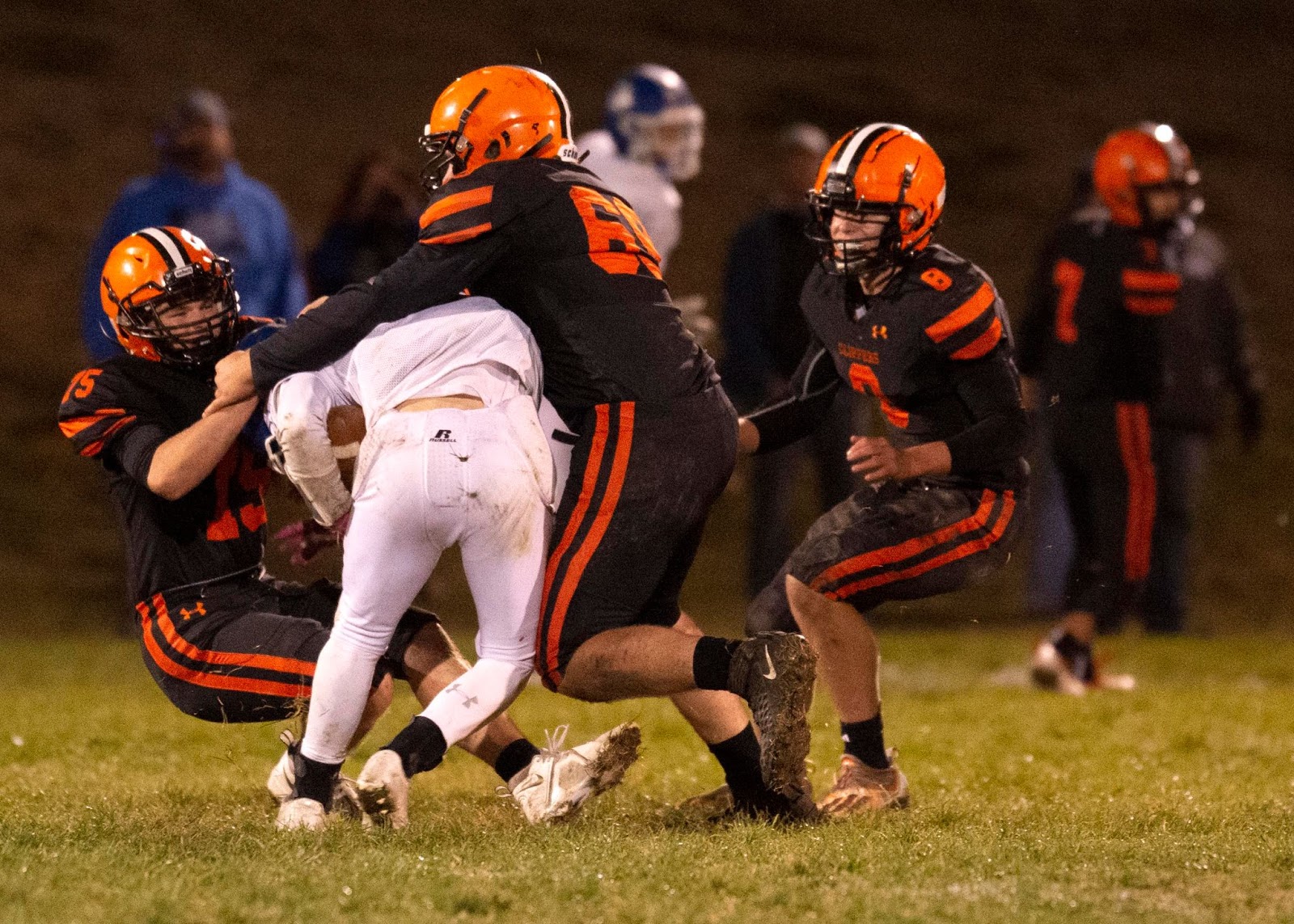 It wasn’t as if the defense played badly, but it was out on the field for a long time. On the tackle here is Nick Simonette. 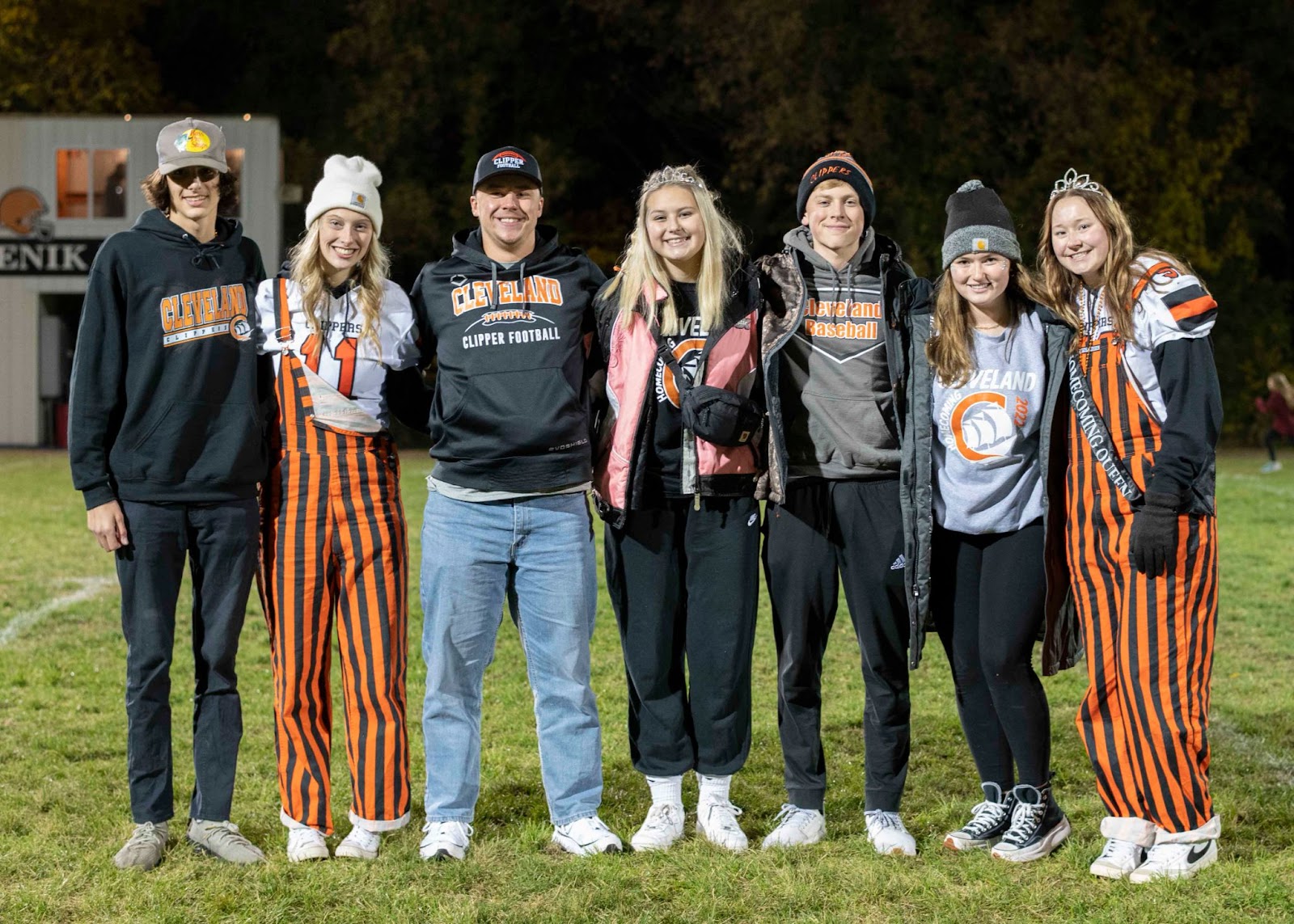 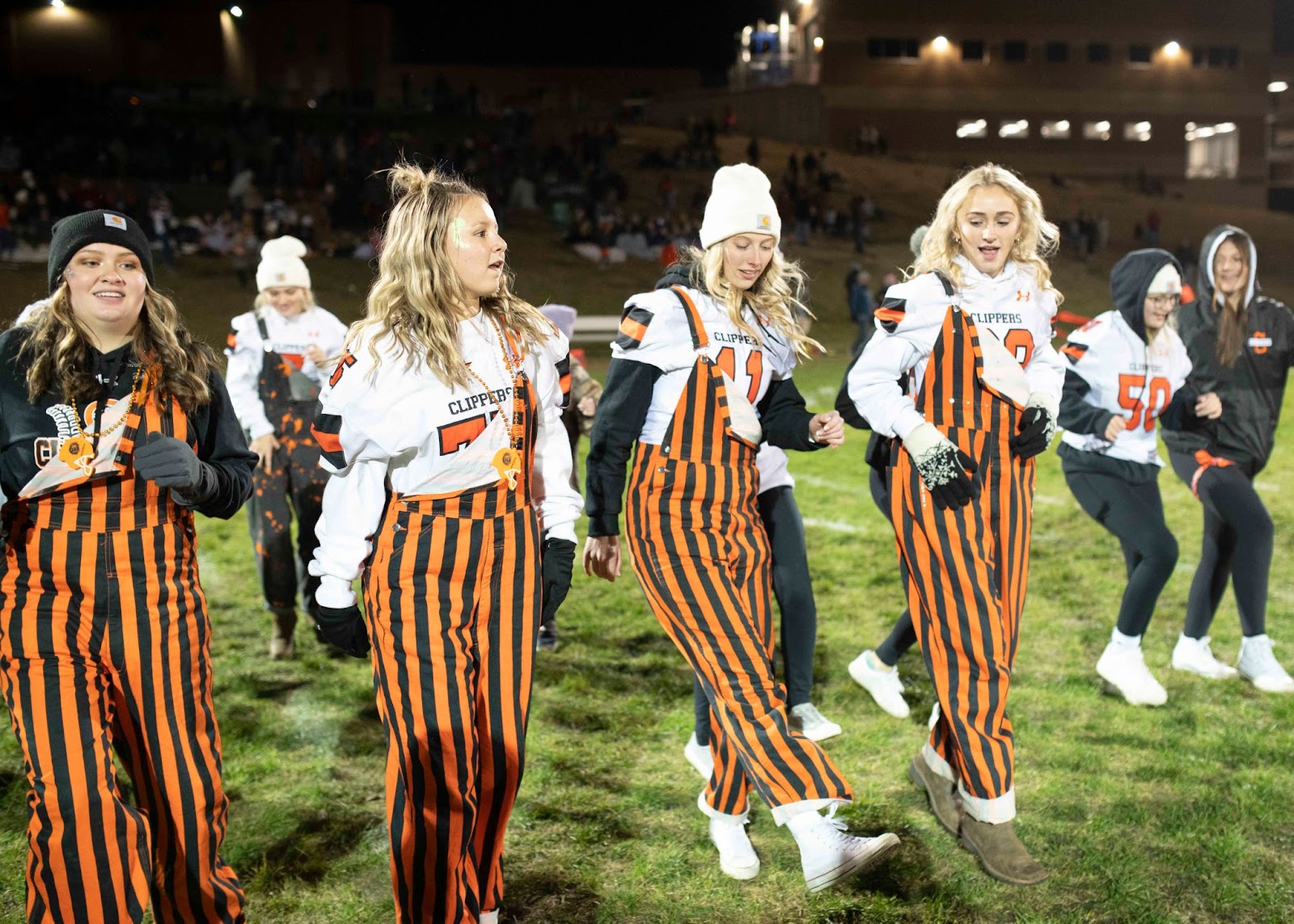 “The Cha Cha Slide” and the “Cupid Shuffle” made for a fun halftime.