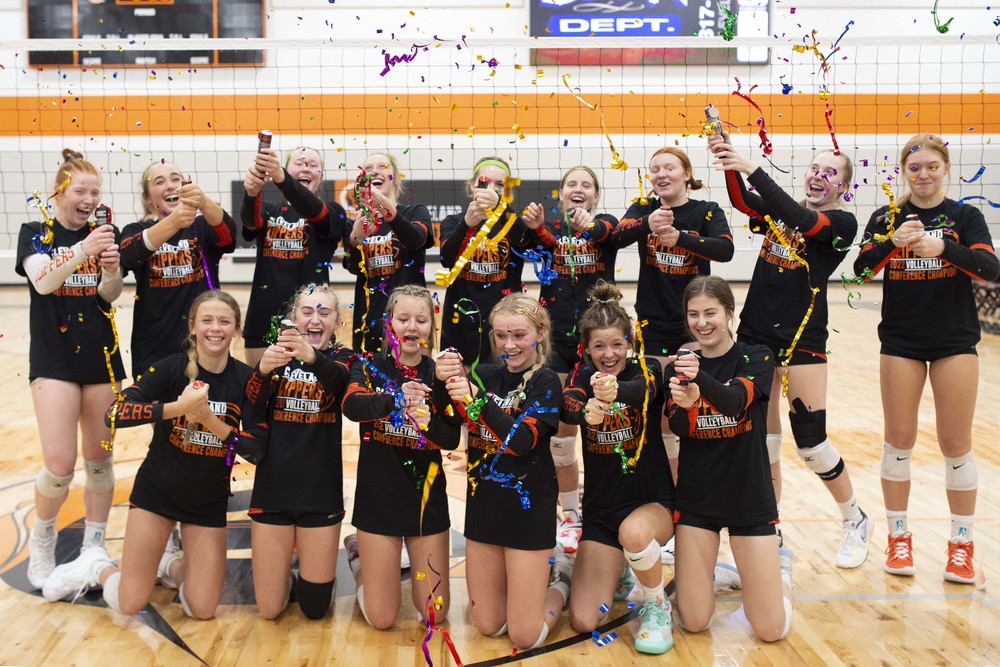 Thanks to help from Martin County West, when the Clippers beat Alden-Conger last week to hand the Knights their second loss of the season, they also won the conference championship.

But, as not to leave any doubt who was best in the Valley, Dave Nixon and company still wanted to defeat visiting Madelia on Tuesday.

And they did…in three-straight sets to put the finishing touches on a title that has eluded the Clippers during the past two seasons.

“It feels unreal,” said senior libero Emma Sweere, who was one of two current Clippers on the 2019 Valley champion team but felt the bitterness of just missing out on the title in 2020 and again in 2021. “The last two years we have been right there. It feels amazing that we did it as a team, and even better we got everyone in there tonight, and we all played as a team.”

The match closed out the regular season. The Clippers will have their first section match in two weeks plus two days after the win.

“This was one of our goals, but we have a lot more that we want to accomplish, and so we are going to keep working,” Nixon said. “We’ll take a little break over MEA, but we’ll have lots of practices in there.”

Lexy Waldron’s ace block was the first point of game one. Sarena Remiger followed up with a block for a winner and a kill to put the Clippers in front 3-1.

Waldon and Laci Hollerich attacked for two more points before the Clippers hit double digits. The Blackhawks hung around the rest of the game, but Harley Connor’s kill put her team up 10-8.

With an Ava Hahn kill the Clippers went ahead 14-11 before their block attempt went out of bounds. But capped off with a Chloe Anderson kill, they went on a three-point run from there to widen their advantage.

Waldron served an ace to put the Clippers up 18-14, but the Blackhawks responded with a kill. When the Clippers abandoned a hit out of bounds on the next point, Madelia was back within two.

From there, the Blackhawks sent a serve out of bounds, and the Clippers stepped over the net line on the next point. Madelia served into the weaving while Waldron airmailed an ace from the serving line. After a Blackhawks hit out of bounds, Waldron remitted another ace serve for a 23-17 Orange & Black lead.

On the next point, a Clipper hit sailed out of bounds. Madelia errored on the serve but came up with an ace tip and a kill to pull within four, 24-20. But Remiger belted a hit to a deserted slot on the Madelia side of the court to punctuate a 25-20 Clipper triumph.

As has often been the case this season, after a fairly tight game one, the Clippers dominated game two. Melia Sathoff’s ace serve got the Clippers off on the right foot, and they scored 21 of the first 26 points.

Down the stretch, the Blackhawks managed nine points, five on winners, but Jersie Kelley swung a kill to break the cycle, and Madelia errored on the final two points for a 25-14 Clipper victory.

Game three was similar. Connor put up an ace block for the first point, and the Clippers outscored Madelia three to one from there for a decisive 18-6 advantage. The Clippers errored three times after that, but Waldron smashed a kill, and Sathoff served over a pair of aces. Later, Hollerich hit down a winner, and Savannah Meyer dished up an ace serve to put the Clippers in front by 13, 23-10.

Madelia managed a couple of kills after that, but Hollerich dropped in another kill, and with an Ava Hahn attack, the Clippers won the game 25-12 to sweep the match and the conference.

The Clippers dished up a dozen ace serves, half of them off the palm of Ava Hahn. Waldron, Greta Hahn and Sathoff each sent over two ace serves.

As just a freshman, Connor was also a member of the 2019 championship team. She, Hollerich and Remiger were also members of the 2020 team.

Alden-Conger and LCWM finished at six and two in the Valley. Madelia and MCW went five and three. St. Clair was three and five. ML/GHEC/T was two and six. Nicollet had just one win, over young but up-and-coming zero and eight Mankato Loyola. 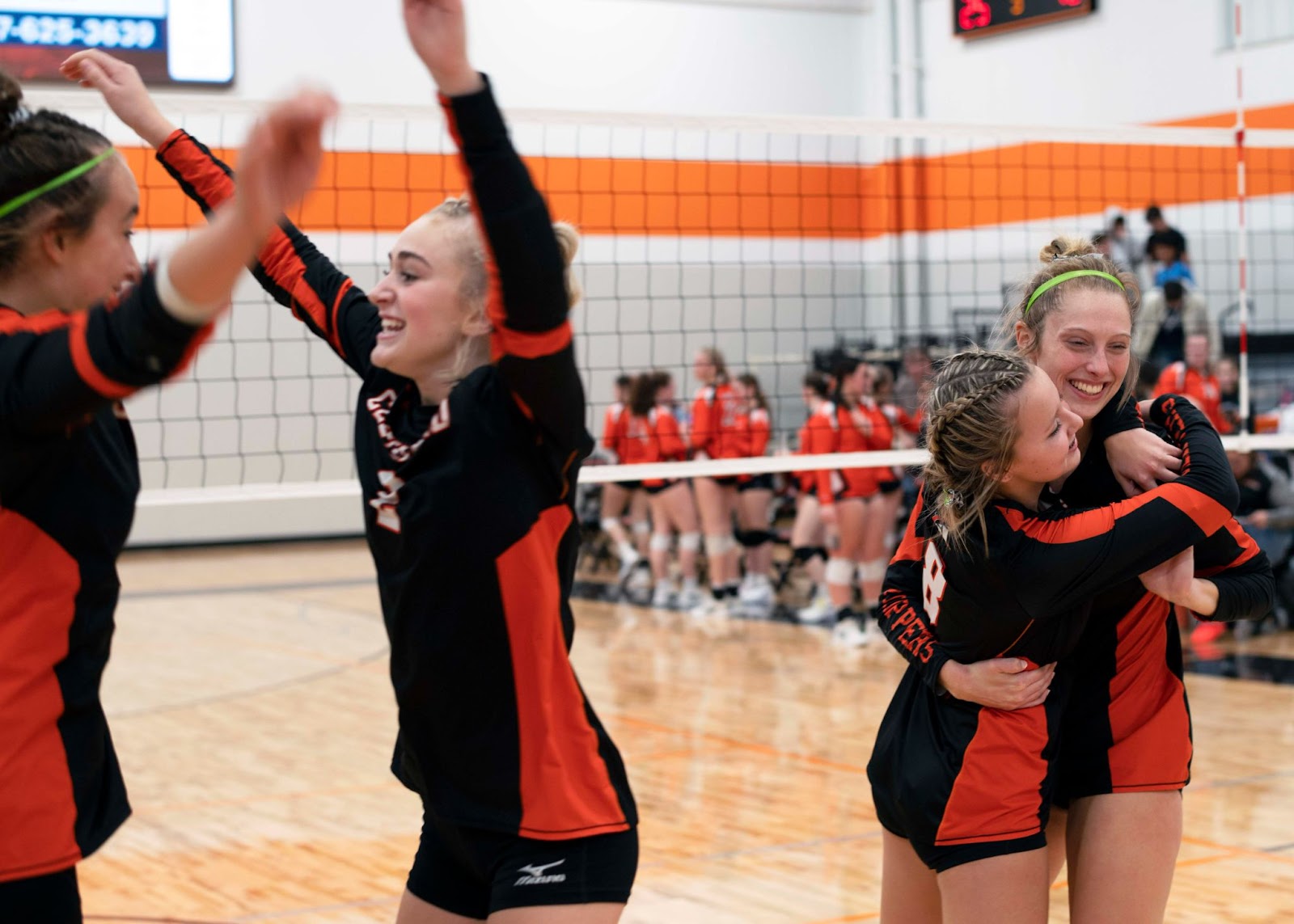 There were lots of hugs to go around after the win. At left are Laci Hollerich and Ava Hahn. At right are Chloe Anderson and Harley Connor. 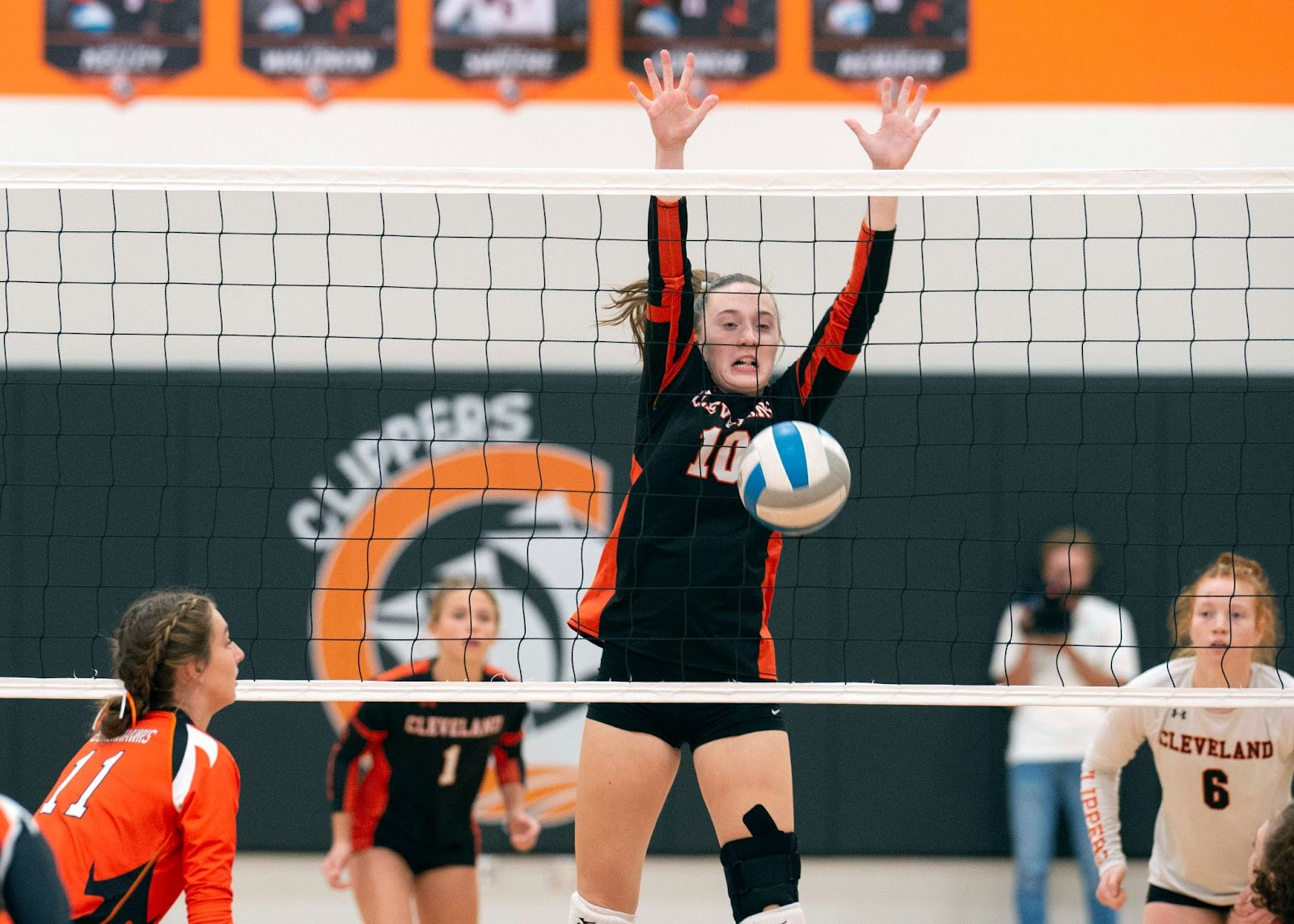 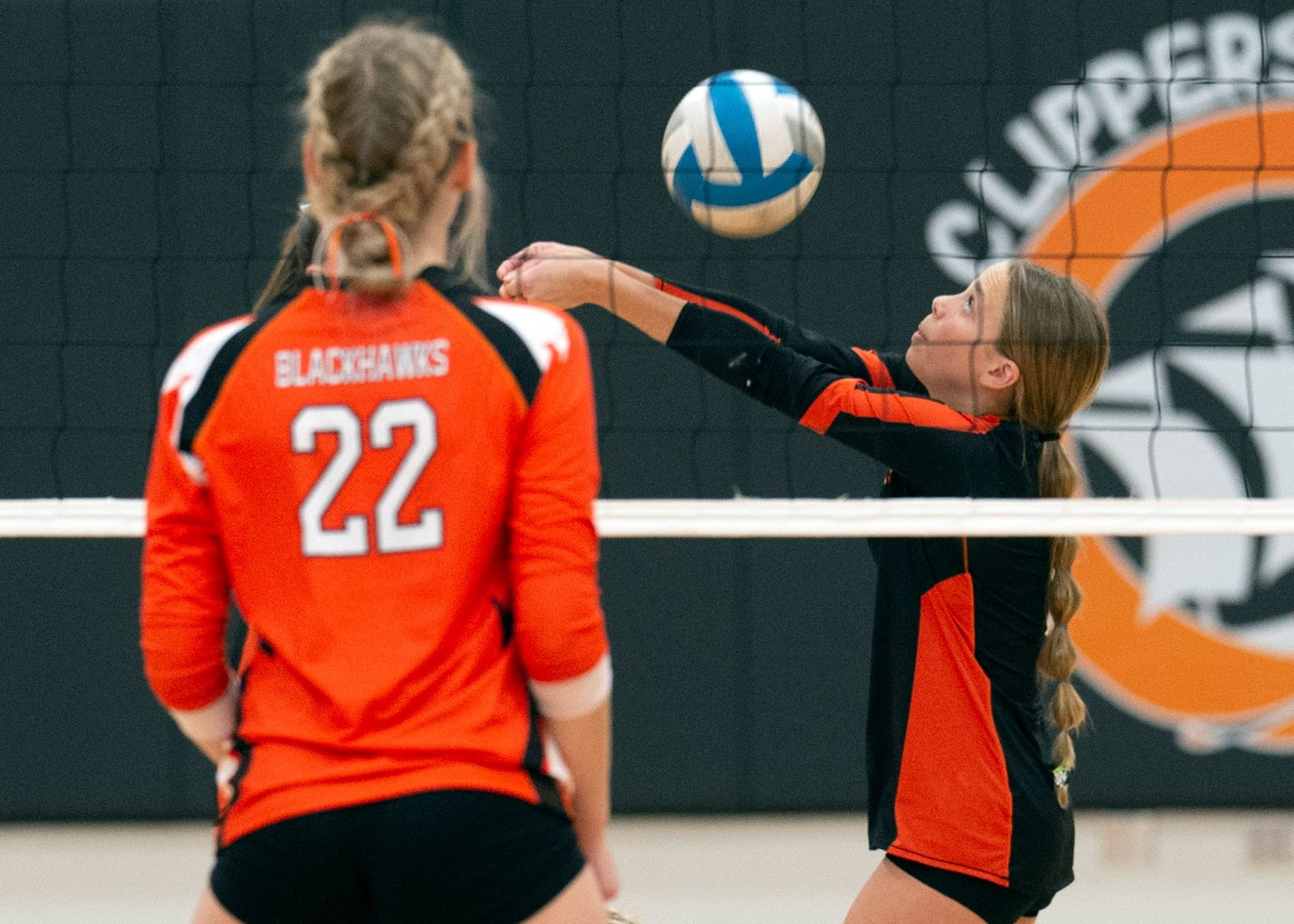 Savannah Meyer on the bump set. 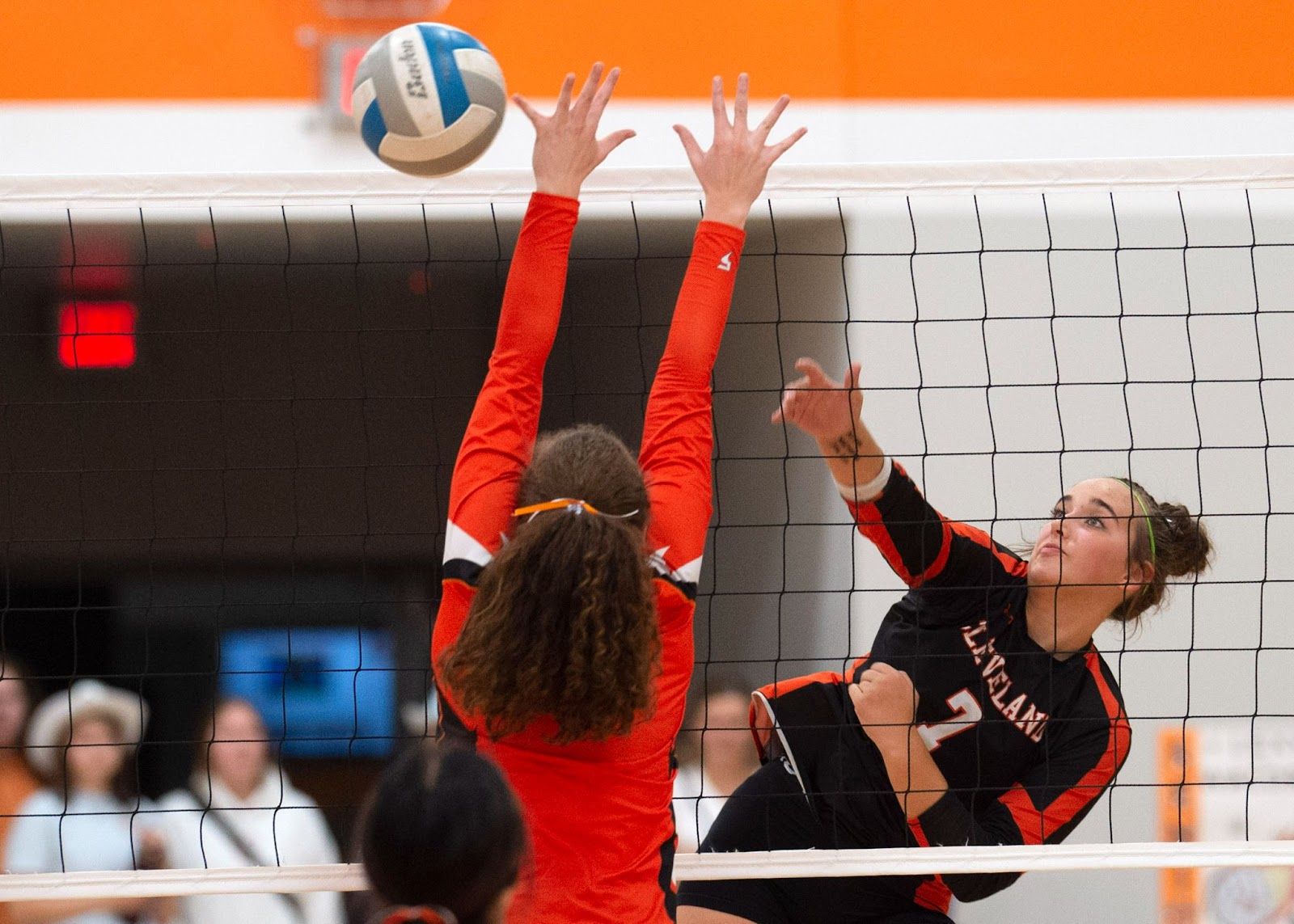 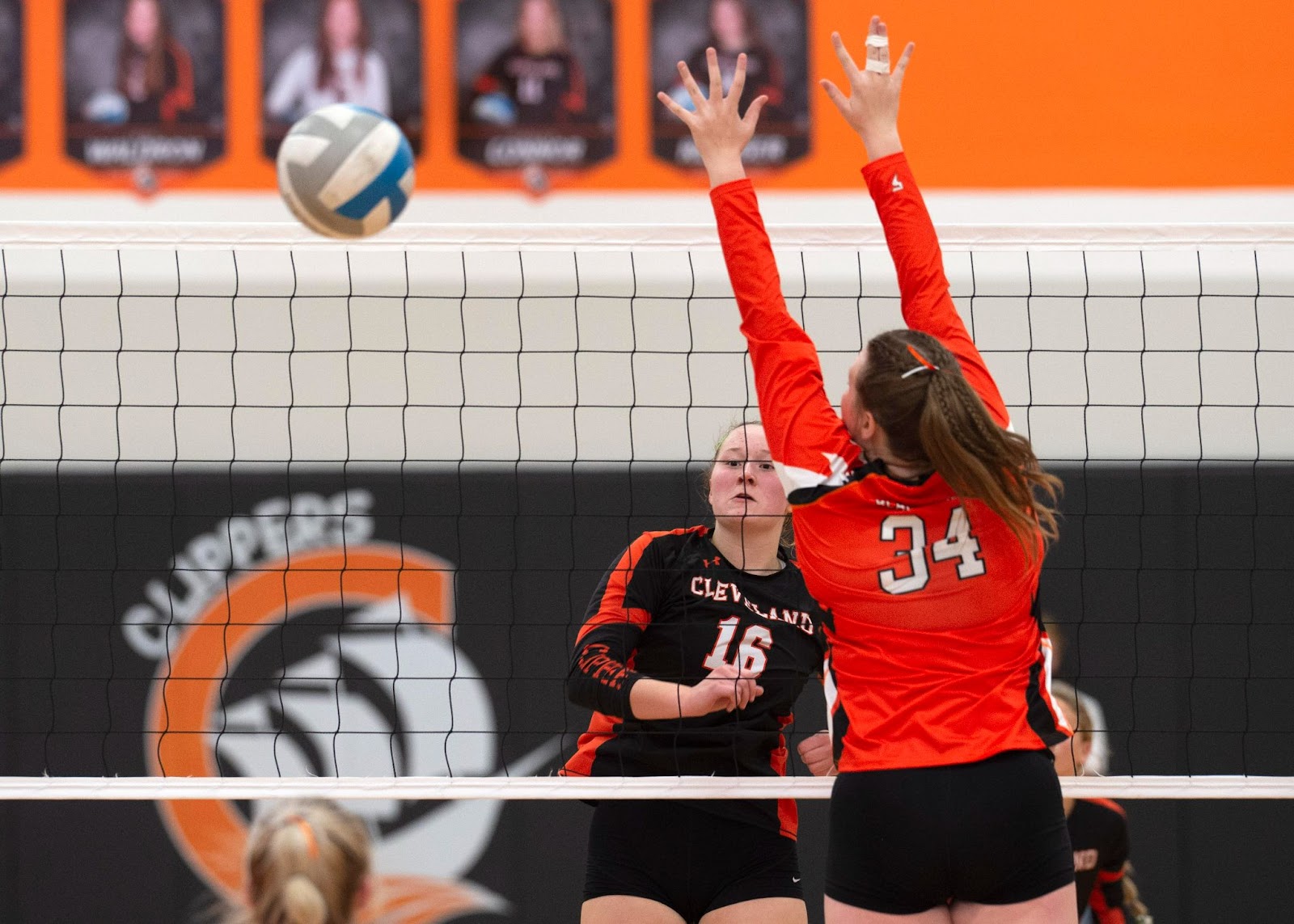 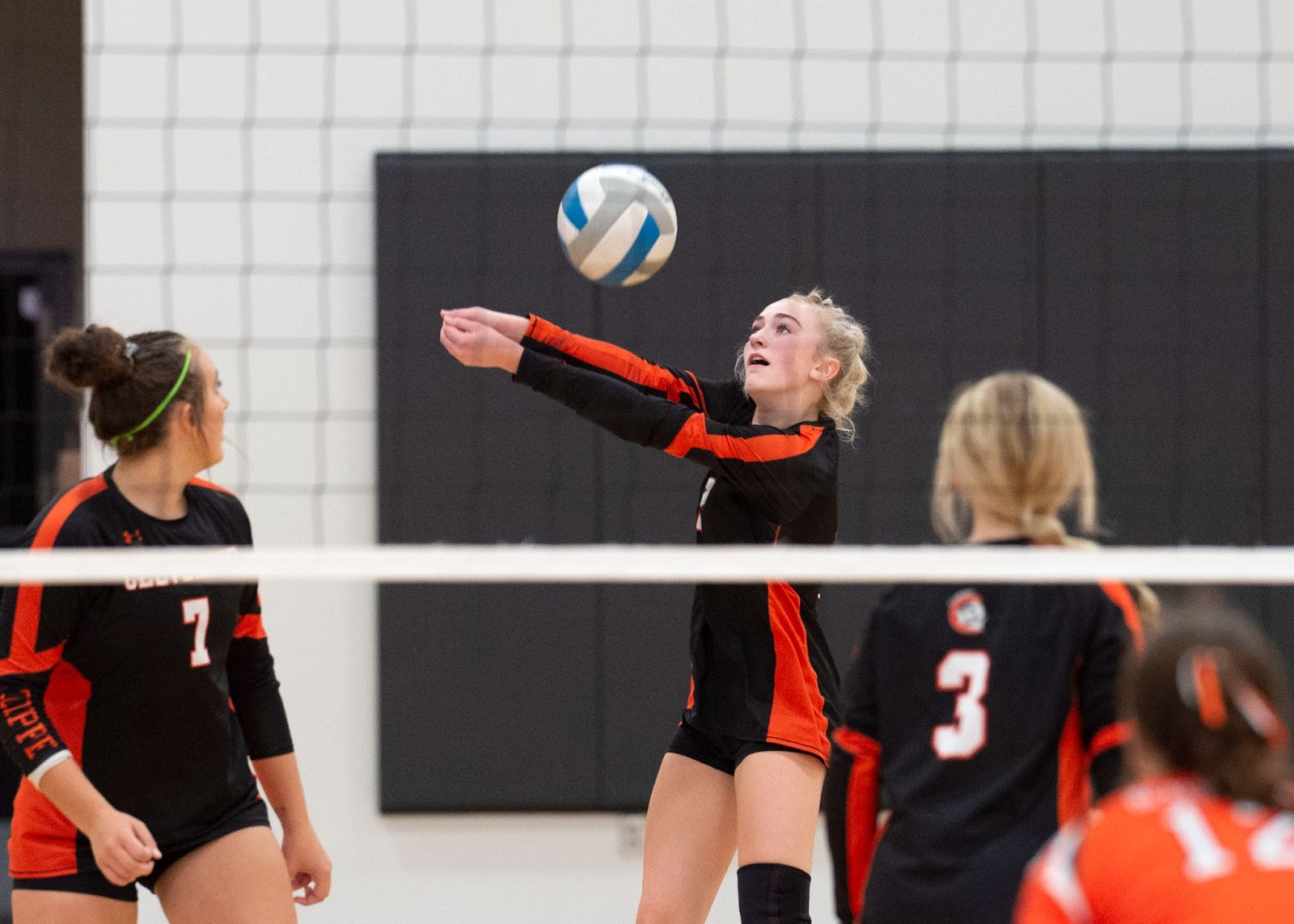 Ava Hahn steers the ball forward from the back row. 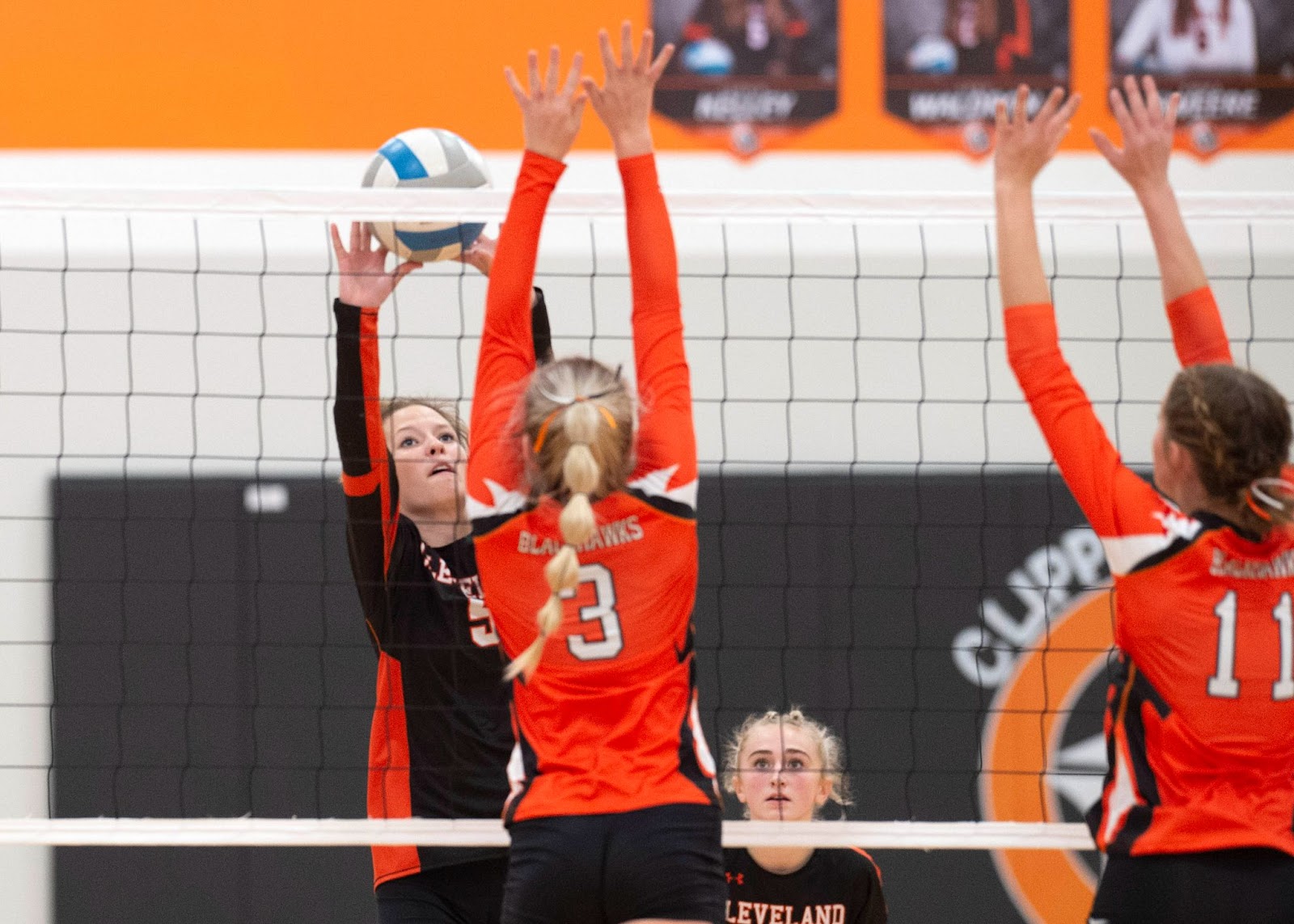 Jersie Kelly on the push at the net. 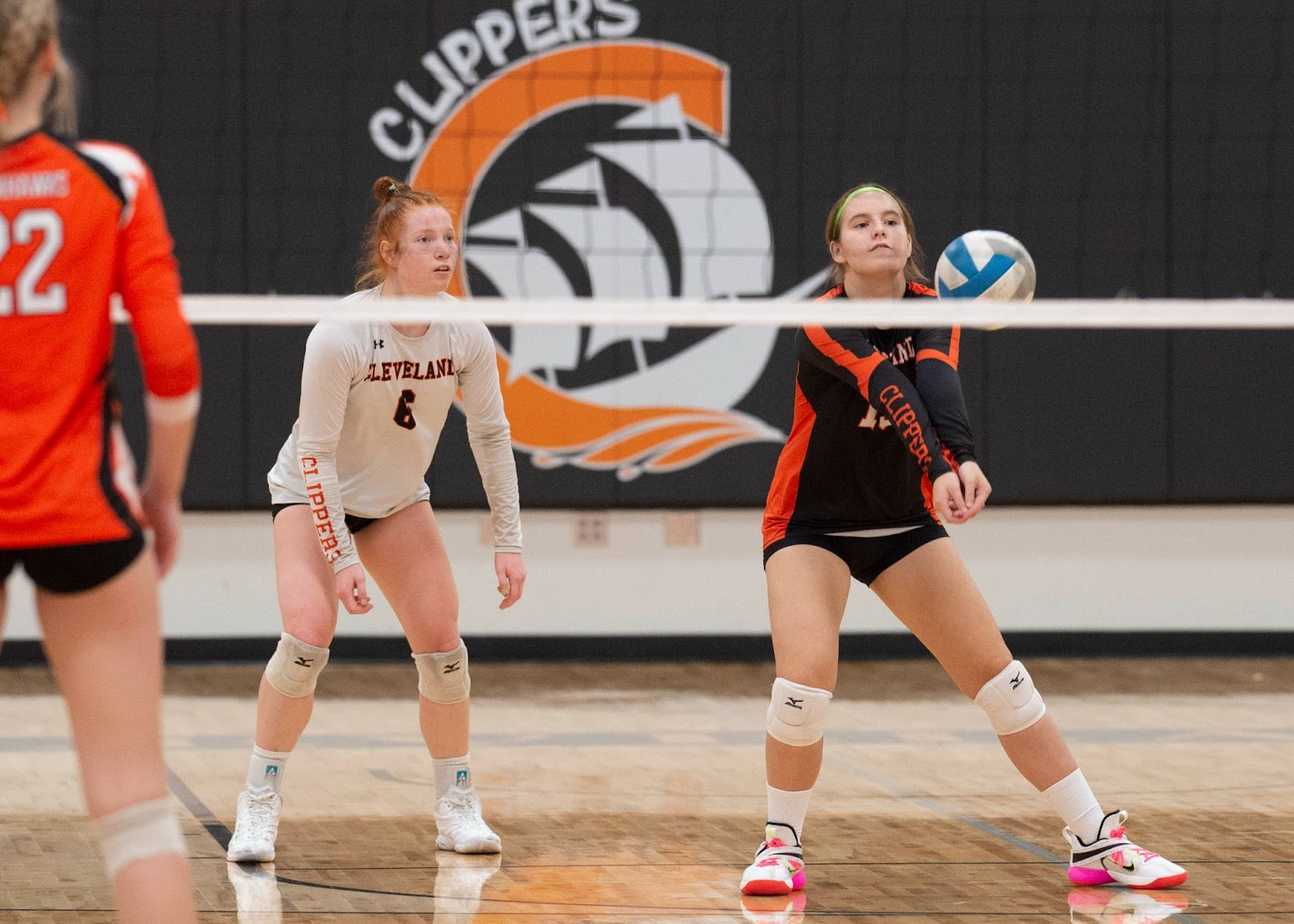 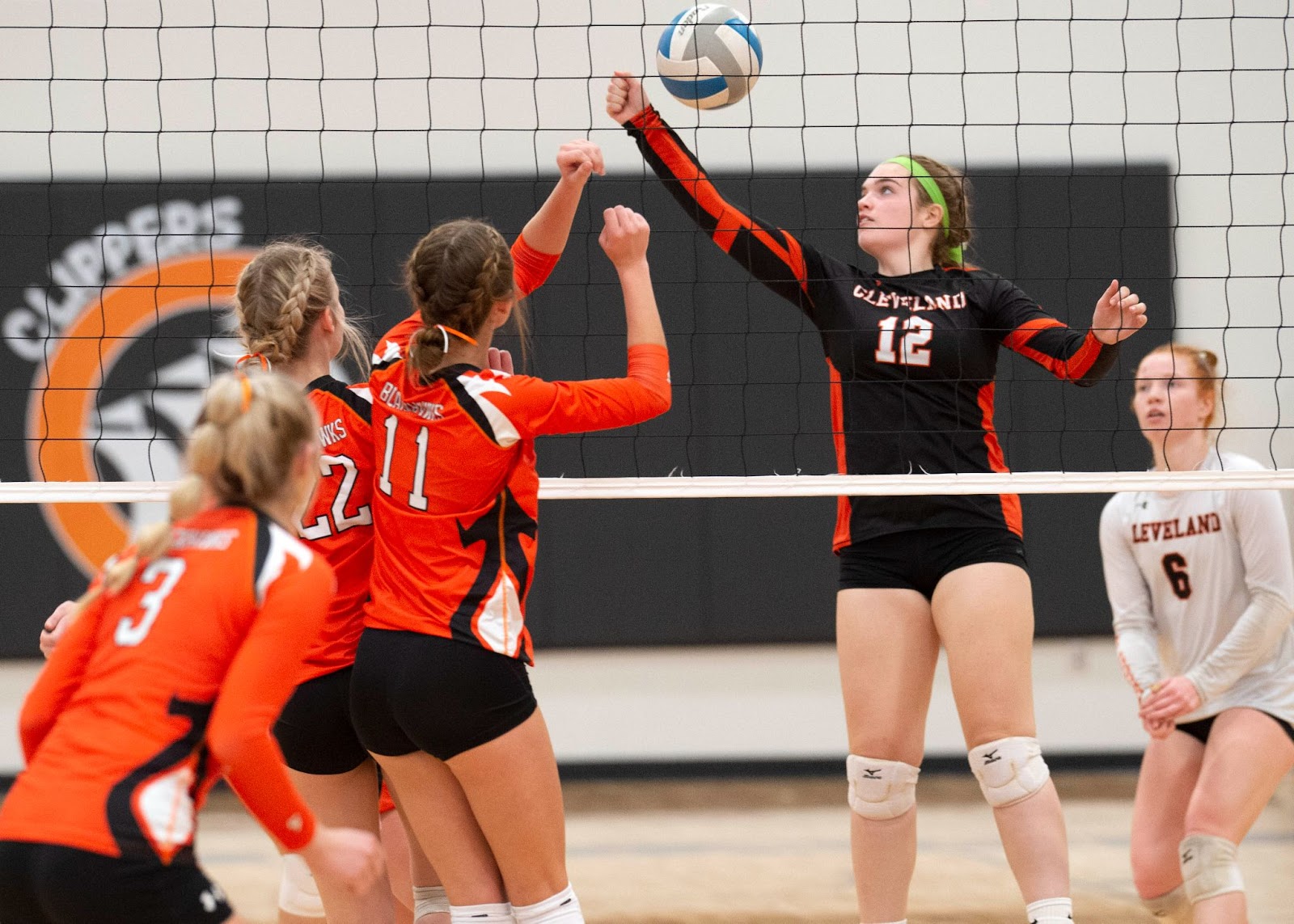 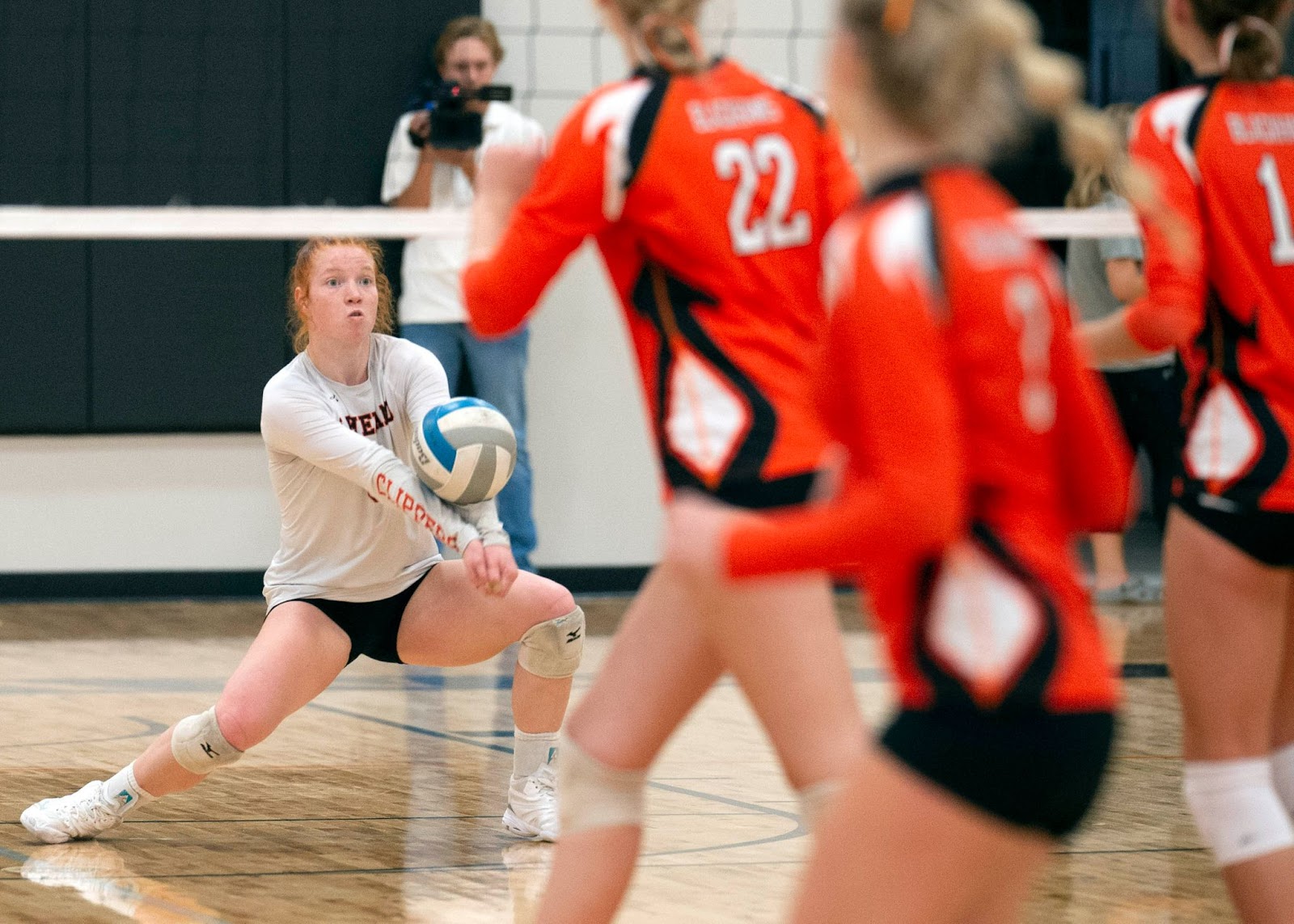 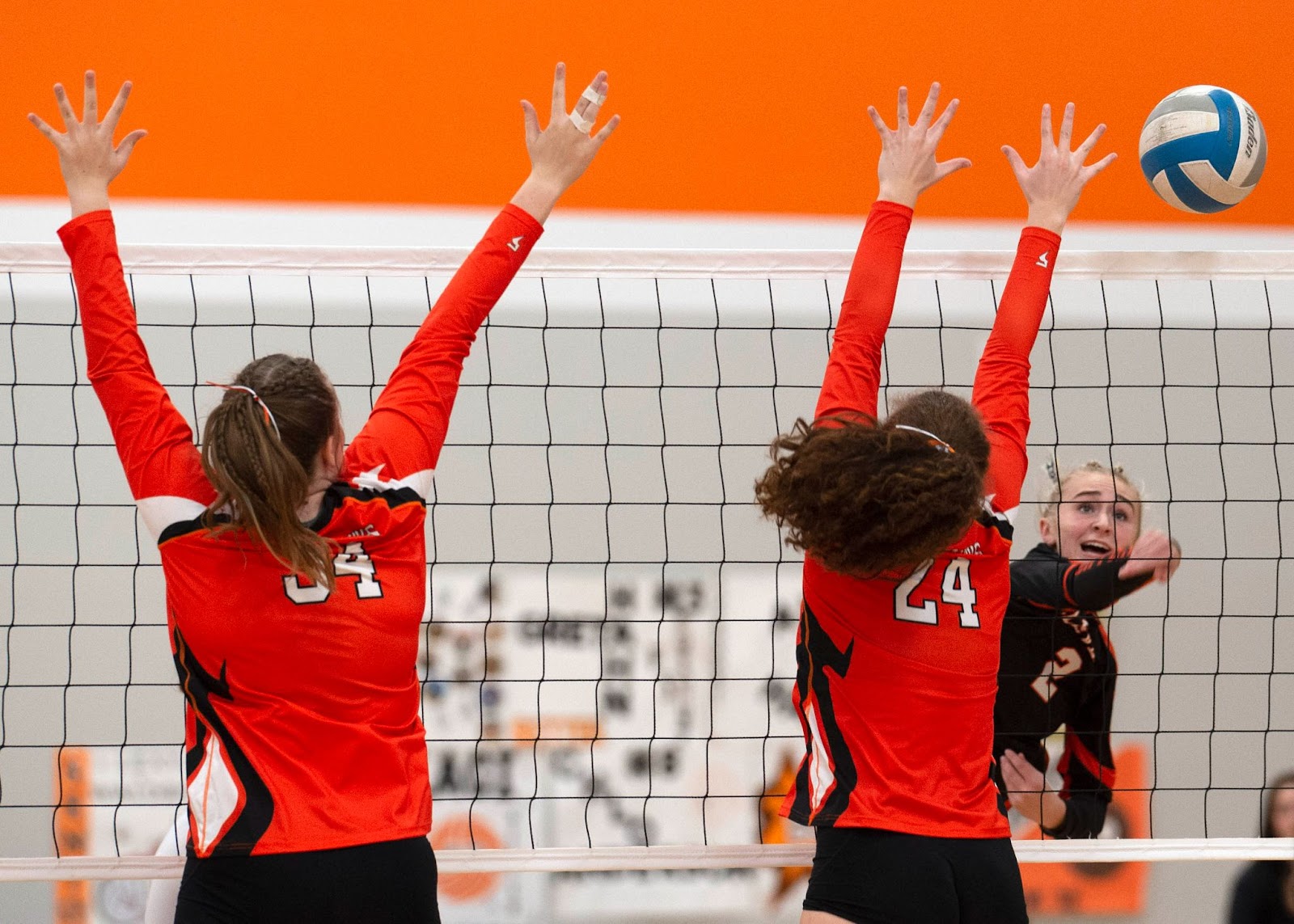 Ava Hahn follows through on a hit. 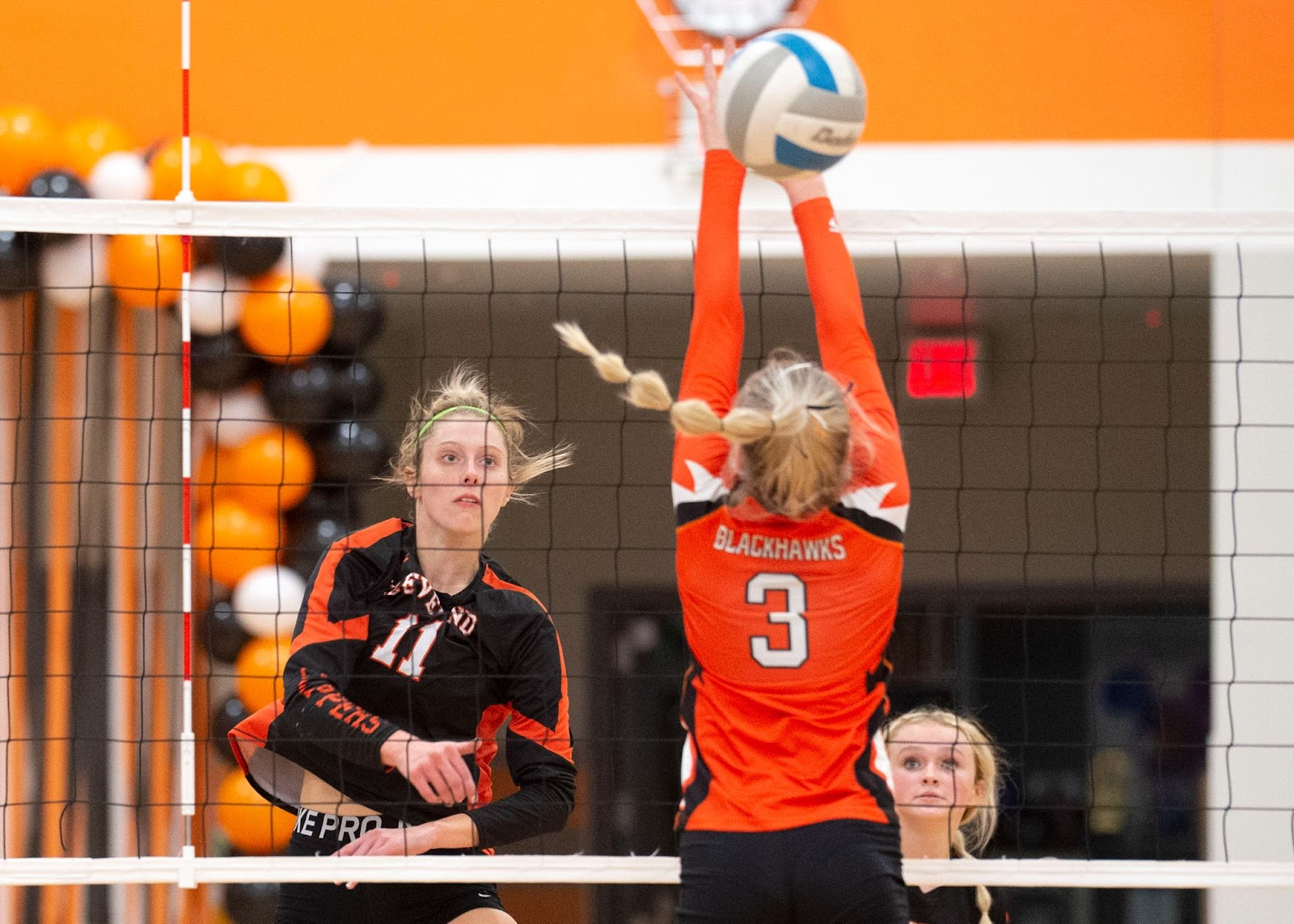 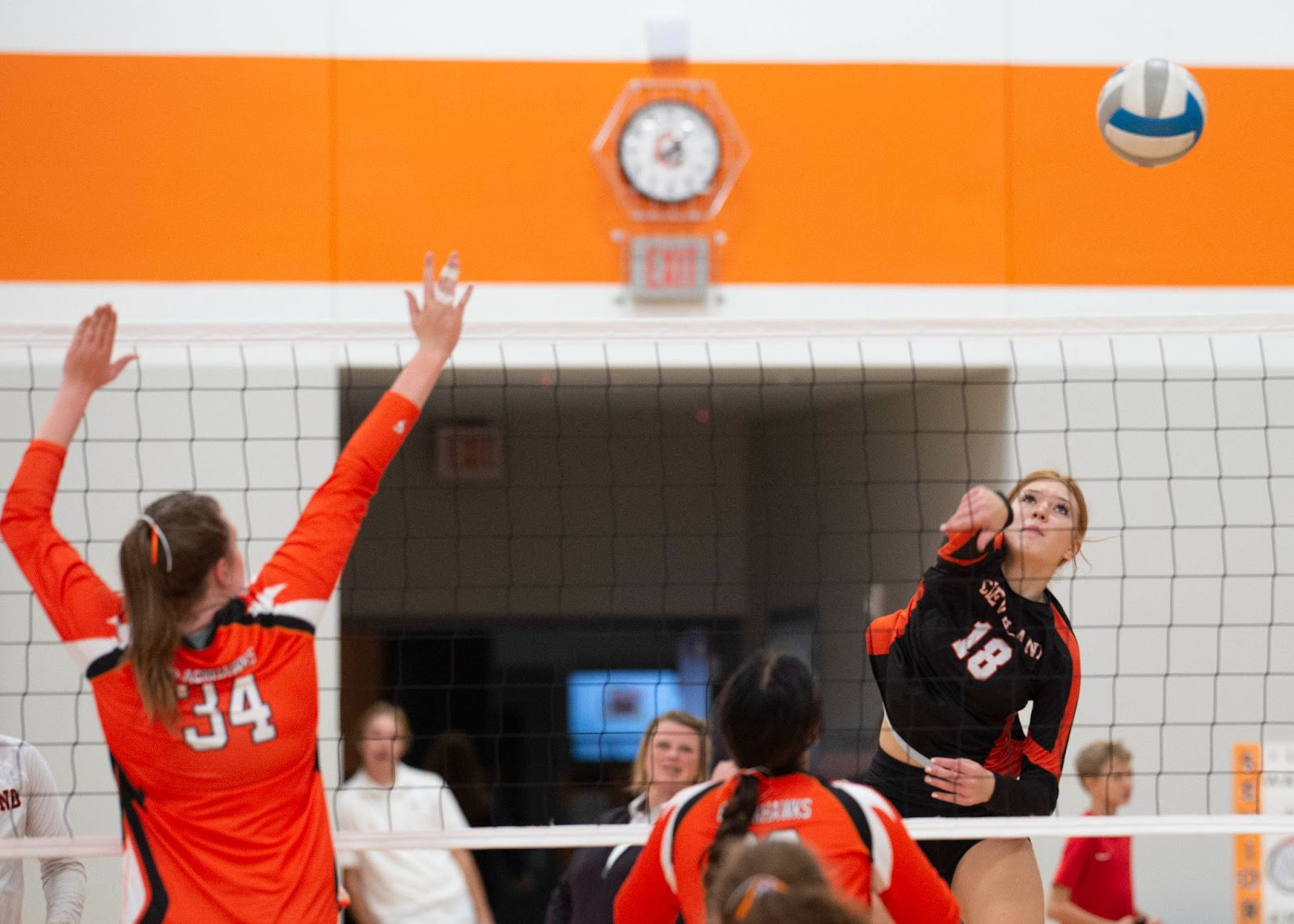 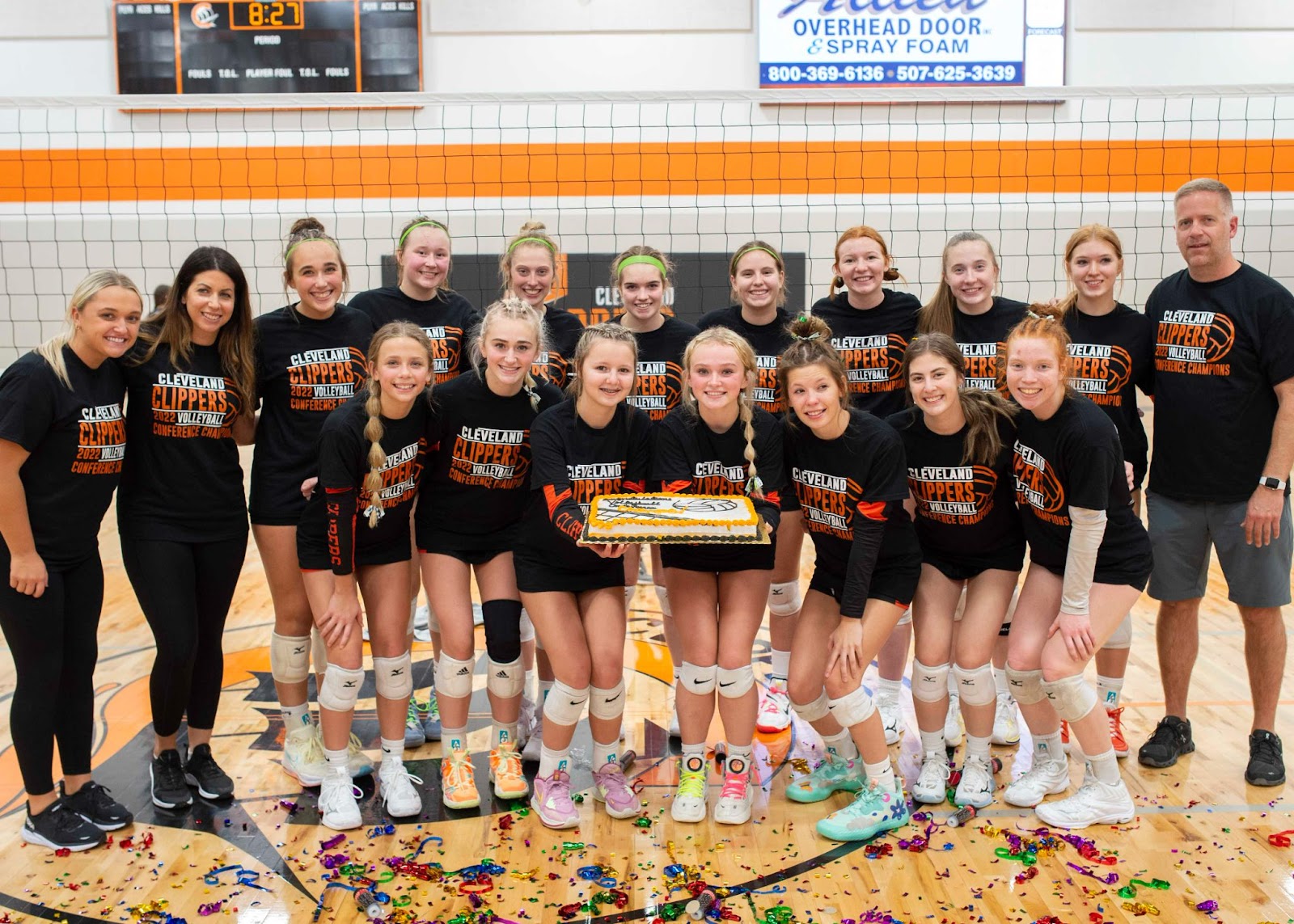 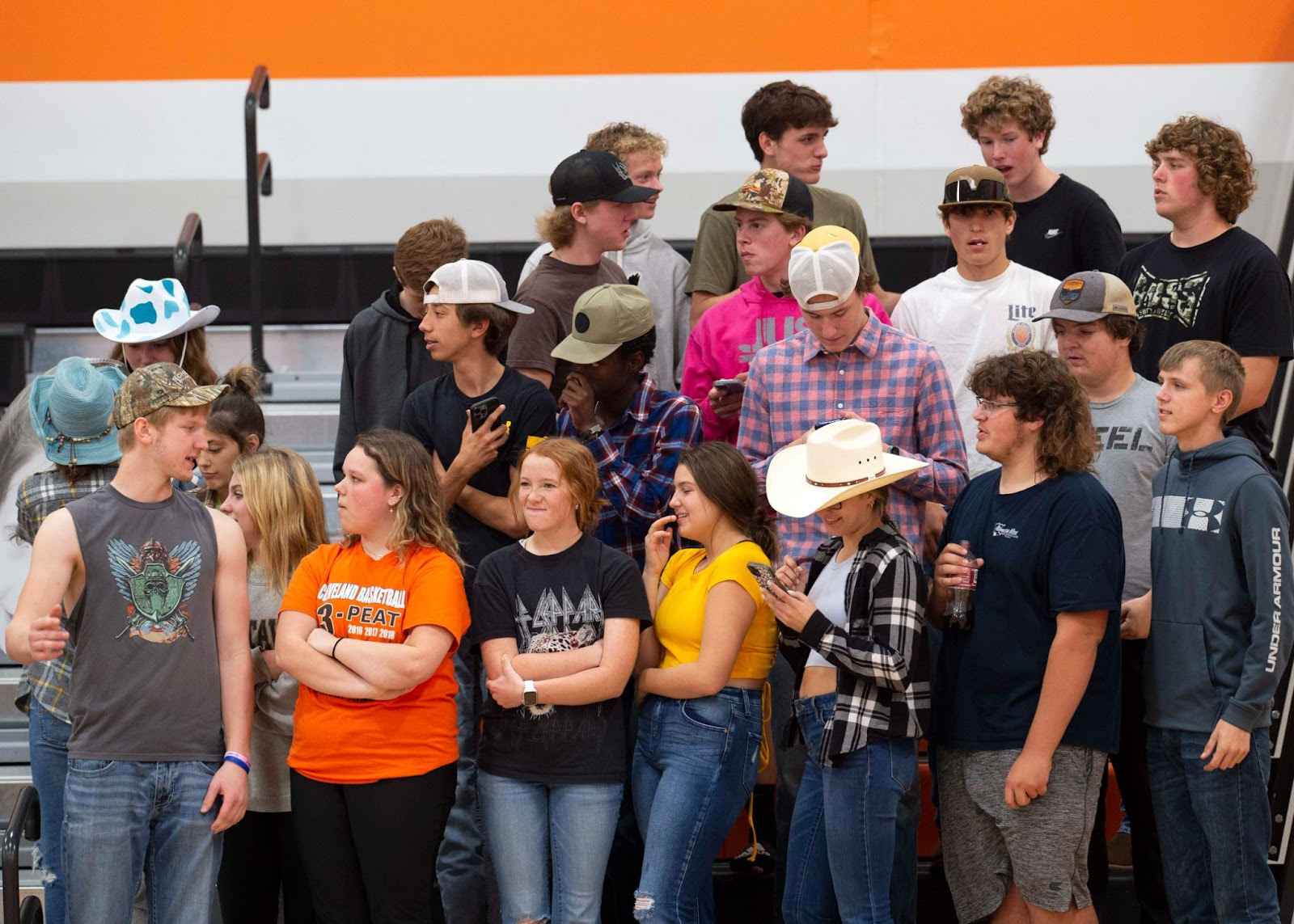 The student section had lots to SnapChat about. 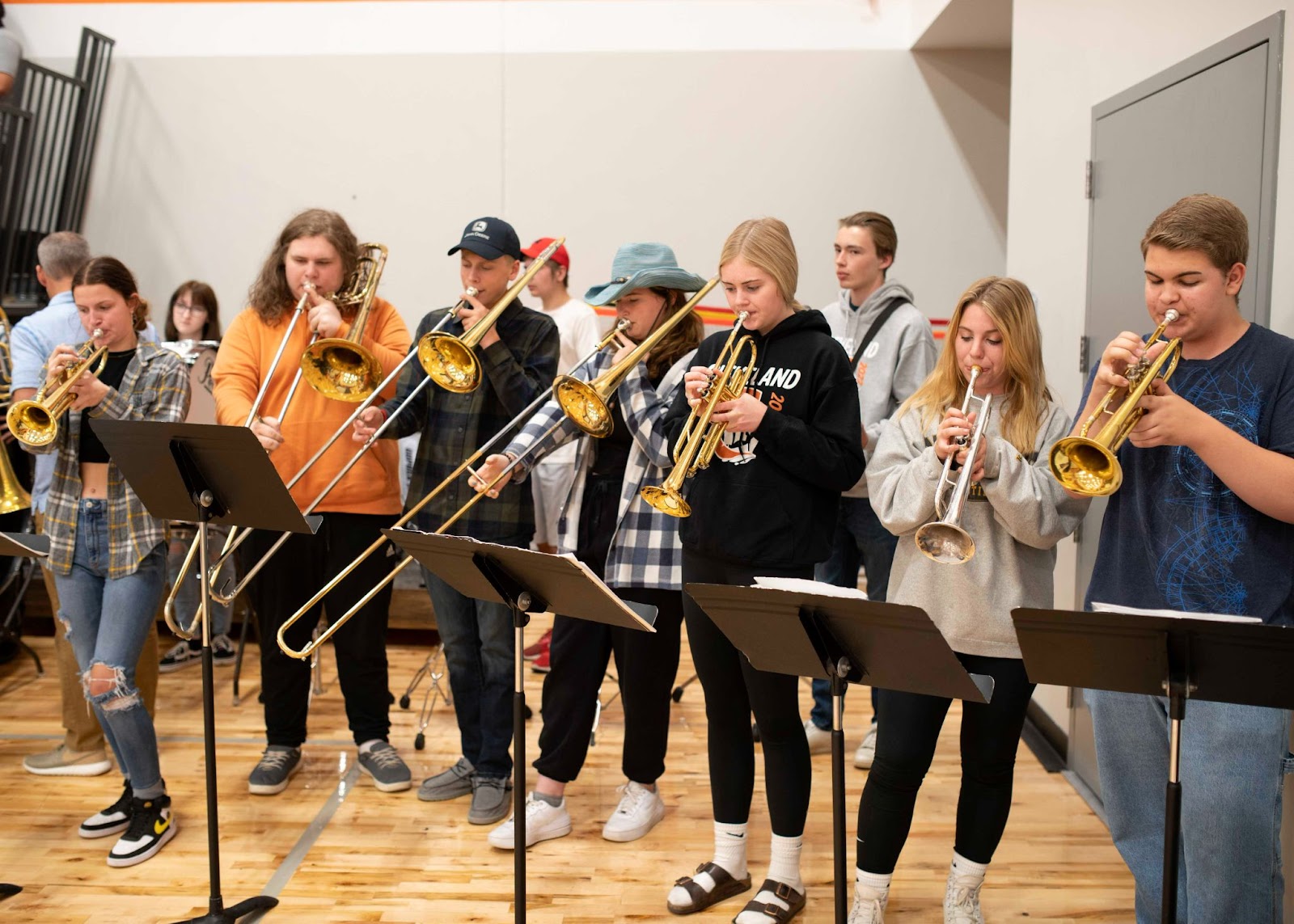 The Pep Band added to the festive night.