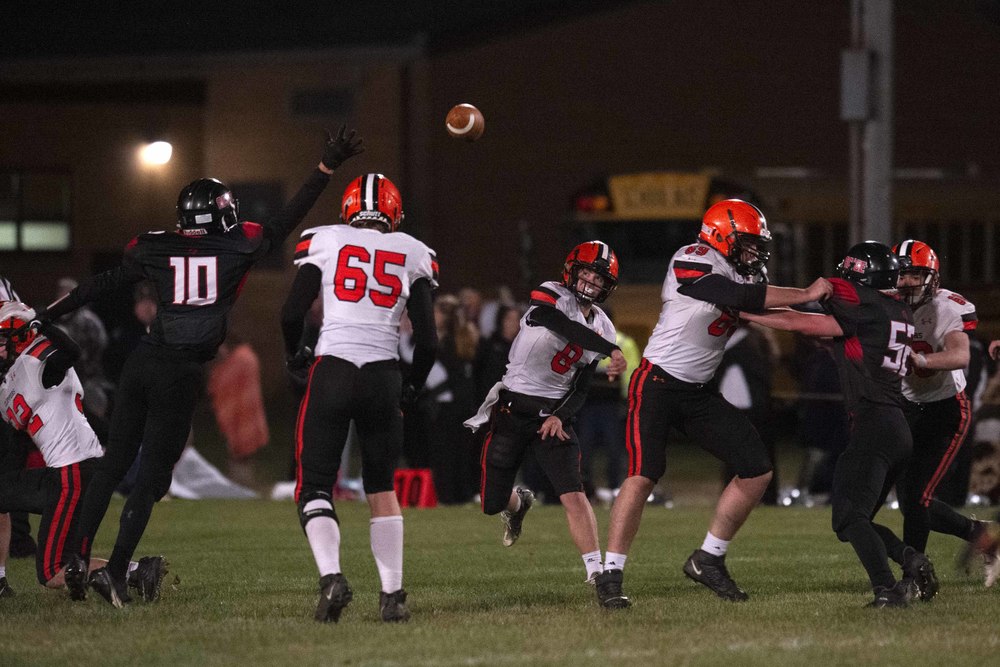 All the scoring in Alden-Conger/Glenville-Emmons 28, Cleveland 6 in Glenville on Thursday came in the second quarter.

For the Clippers, the six points were the result of a 5-yard pass by quarterback Blake Lyons to Henry Strobel.

Overall, the road trip was a solid effort by the Clippers, and Strobel, a senior, provided a spark the Clippers needed, said head coach Erik Hermanson.

“Henry had his best overall game as a Clipper. He really stepped up in trying to make big plays for us on offense and on special teams. You could see in his eyes that he was doing everything he could to help us move the ball. He was our leading rusher and caught a great TD reception. He continued to spark the resurgence of our kick return game with his return and his blocking for Kale (Kelley).”

The blocking Hermanson was referring two was Kelley's 28-yard kickoff return to the host’s 45, one of two big plays that set up Cleveland’s touchdown.

“Gabe (Sullivan), Kale and Henry have really started to take pride in our kick returns, and again it showed on the field,” Hermanson said. “Kale's 28-yard return was because he was following a great wall set up by his inspired teammates. Coaches (Brady) Hahn and (Larry) Walechka have done an awesome job helping this group improve each week.  I think we will break a few more really long returns before the season is complete.”

The other big play that came before the Clipper TD was a 23-yard toss by Lyons to his eighth-grade brother Carson Lyons. Harkening back to the Carter Kopet-Austin Plonsky combo, the brothers show signs of a duo that will be tough to defend.

It was a good start for the Clipper defense at least. Each team punted twice before the Knights moved the ball on runs for a 54-yard campaign that was capped off by a 1-yard plunge across the goal line. With the PAT kick, they went up 7-0 a minute or so into the second quarter.

After the ensuing kickoff, AC/GE got the ball back on an interception. Two plays later, they scored on a 71-yard touchdown run. With the PAT kick, they were suddenly up 14-0.

Similarly, a Cleveland fumble after the kickoff gave the ball back to the Knights, who took advantage and scored on a 10-yard pass for a 21-0 lead after the point-after boot. The Clippers scored after the kickoff, but the Knights blocked the PAT pass and quickly assembled a drive to score again with a minute left before the intermission. That campaign featured a couple of long passes before a 4-yard touchdown pass and another PAT kick.

“Much of that was caused by Tanner going down and some confusion on coverages with new players and other players playing out of position. It really shows what an awesome season that Tanner has had as an 8th grader playing a very difficult position like outside linebacker. We really missed his smarts and athletic ability.”

Most of the fourth quarter was spent deep in Knight territory. The Clippers took the ball to the Knight 12 on one series, to the 5 on another and just in front of the goal line after Jacob Rohlfing recovered a Knight fumble and lumbered a couple yards to the 2, but time ran out on the Clippers before they could tack on some more points.

Lyons completed 10 of 31 pass attempts for 95 yards with three interceptions. His brother caught three passes for a total of 47 yards. Strobel had three catches for 31 yards, and Kelley had four catches for 25 yards.

The Clippers gained 77 yards on the ground. Lyons had 30 yards on eight keepers while Strobel took nine handoffs for 37 yards.

“Kale had a great night returning kicks,” Hermanson said. “He fielded every punt, which automatically gives a better field position than if you let them bounce, and he had his best returns. His speed on the kick return group is really a must see because he has the chance to break a long one on every return.”

“I can’t tell you how proud I am,” Hermanson said. “When you see Blake playing his heart out for every single yard. When you see Gabe tying to make every tackle. They’re the offensive and defensive leaders, and not only that, they’re telling everyone what they have to do on every play because we had a couple injuries tonight, and all of sudden we are playing even more eighth or ninth graders.”

Hermanson said the future remains bright for the Clippers, and the game at Glenville foreshadowed that.

“There are people that want to win for the school, want to do it for the town, want to do it for all of us, like Blake and Gabe and Carter Barto and more. They are the epitome of doing what we want to Cleveland football to be all about: just doing it for each other and trying to recapture that magic that I know we can have.”

Hermanson also pointed to the leadership and skill of freshman wide receiver and defensive back Nathan Seeman.

The Clippers close their regular season on Wednesday when they take on host Mayer Lutheran. The Crusaders beat GFW, Alden, NRHEG, JWP and USC but lost to St. Clair/Loyola and Lester Prairie. 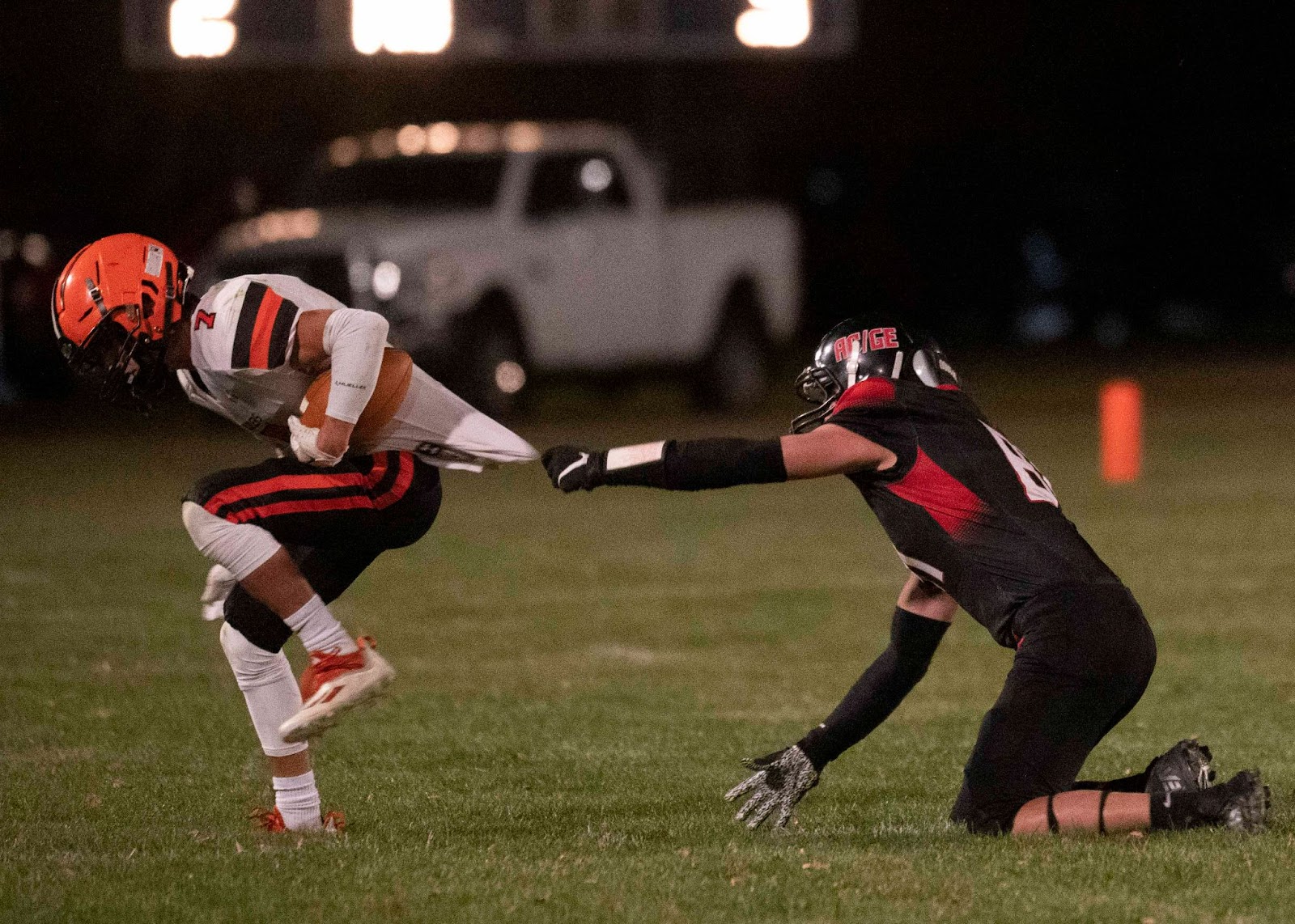 A Knight defender tugs the jersey of Kale Kelley. 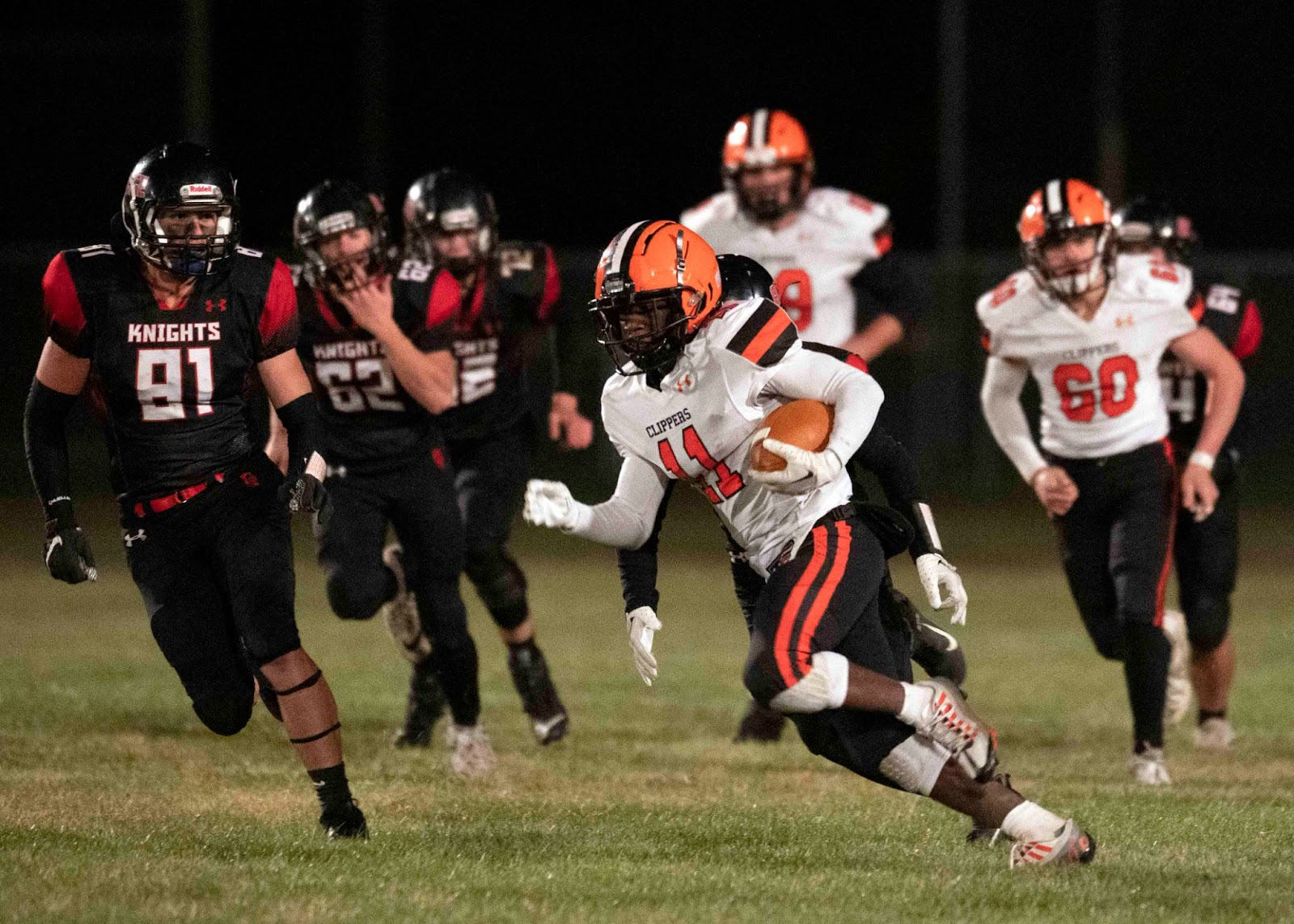 Henry Strobel on the run. 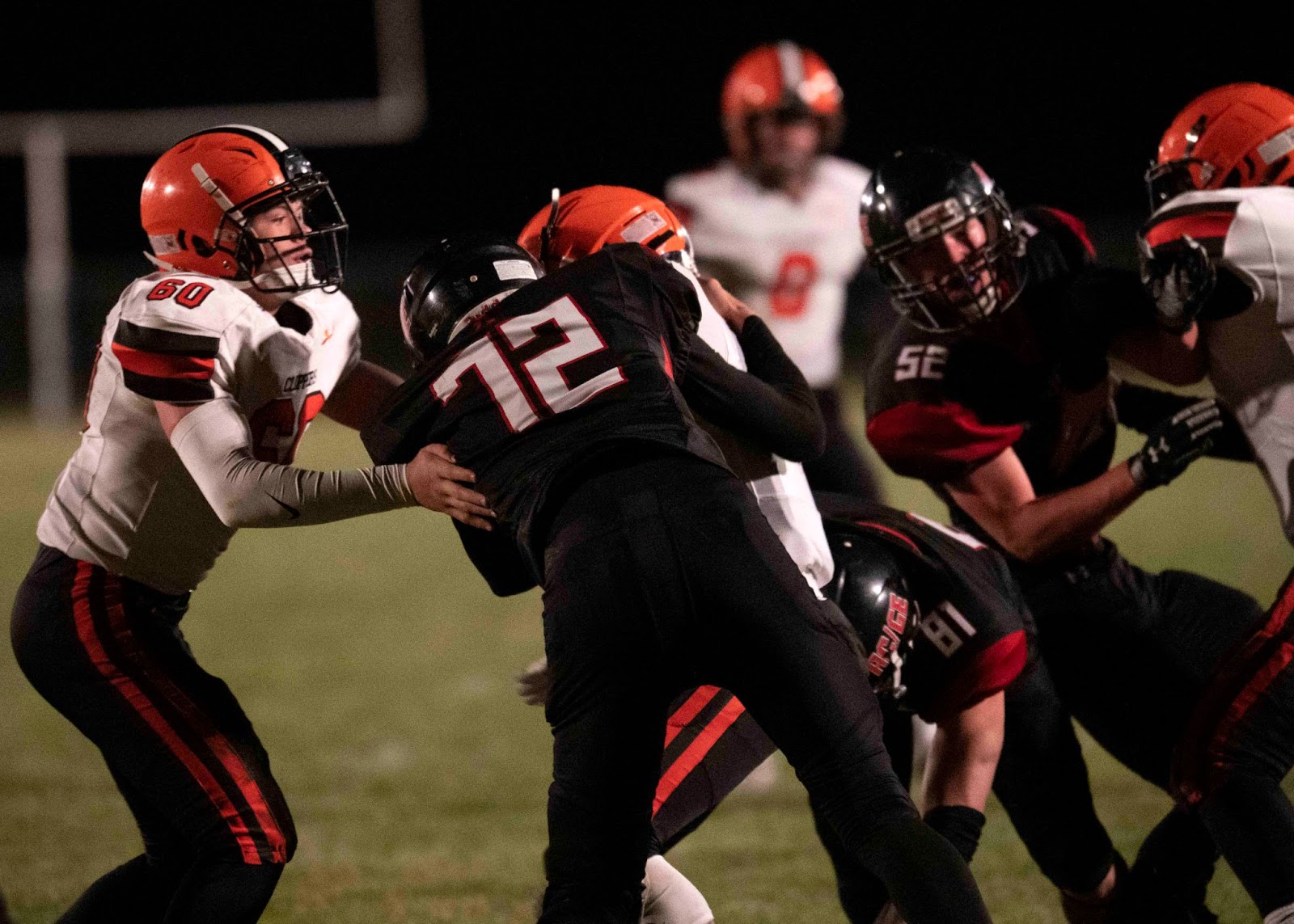 Gabe Sullivan attempts to push a defender off a Clipper ball carrier. 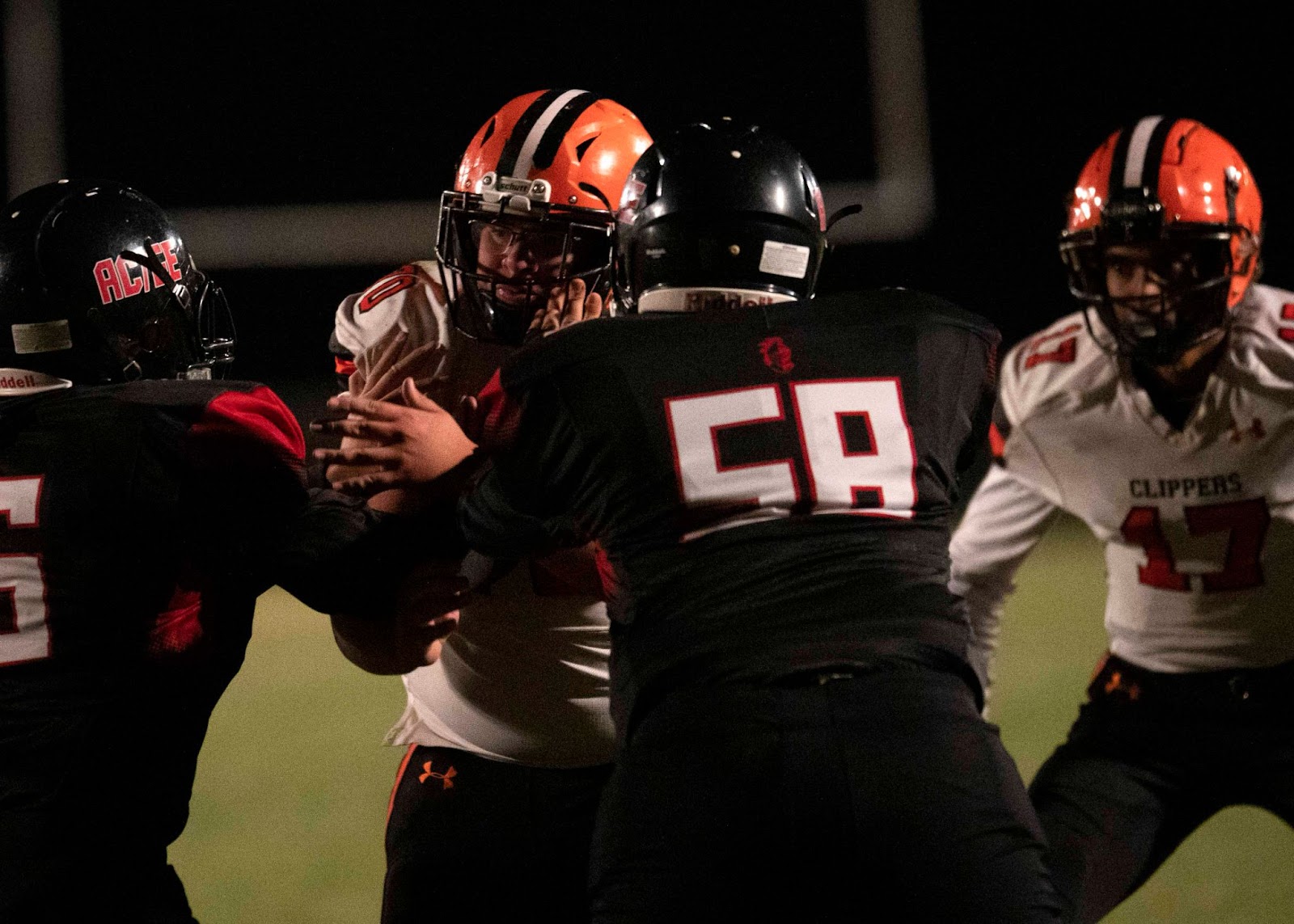 Martin Gibbs gets double teamed at the line.

Blake Lyons slides to the right on a keeper. Out front is Munya Kuvaoga. 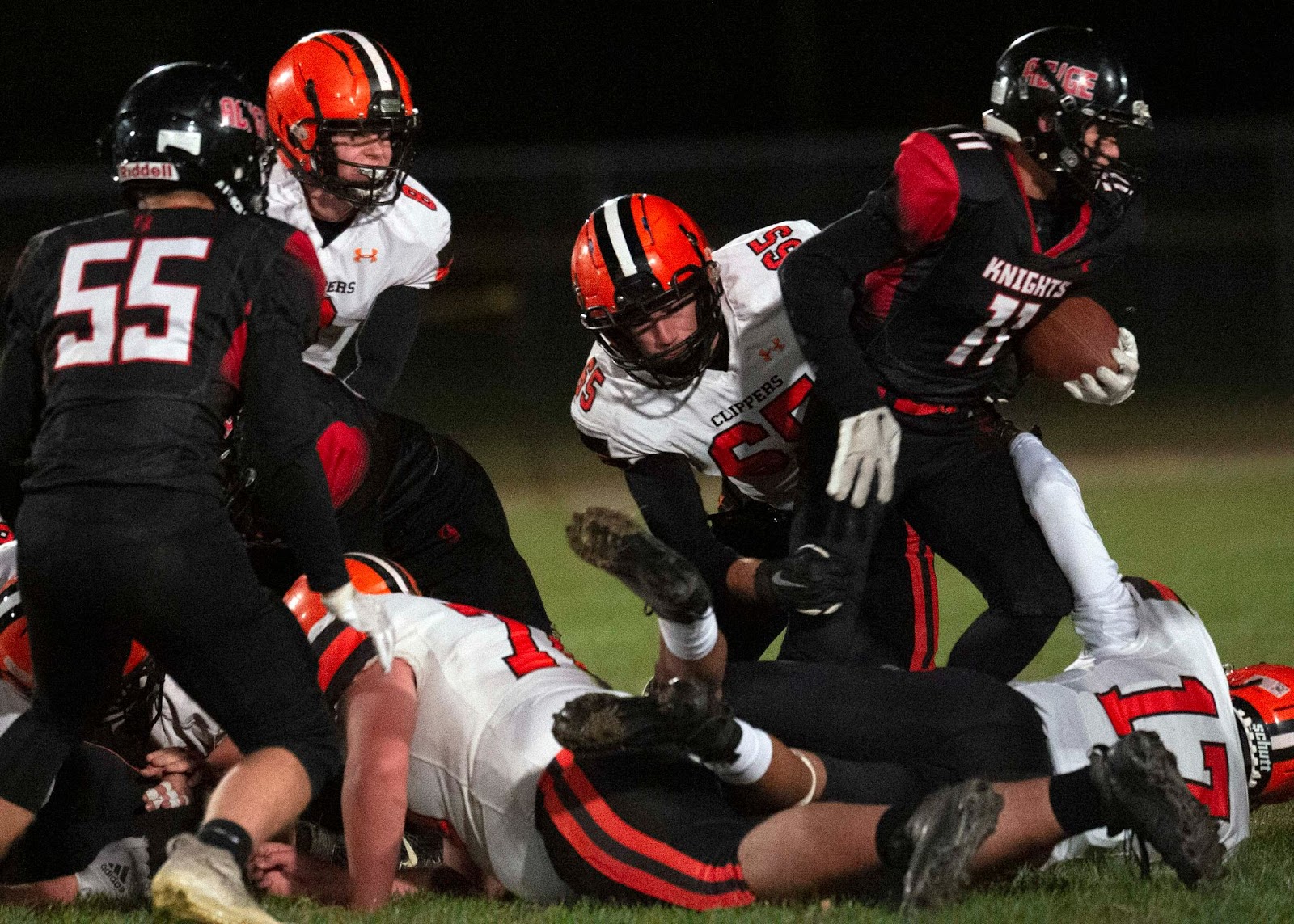 Carter Barto on the tackle. 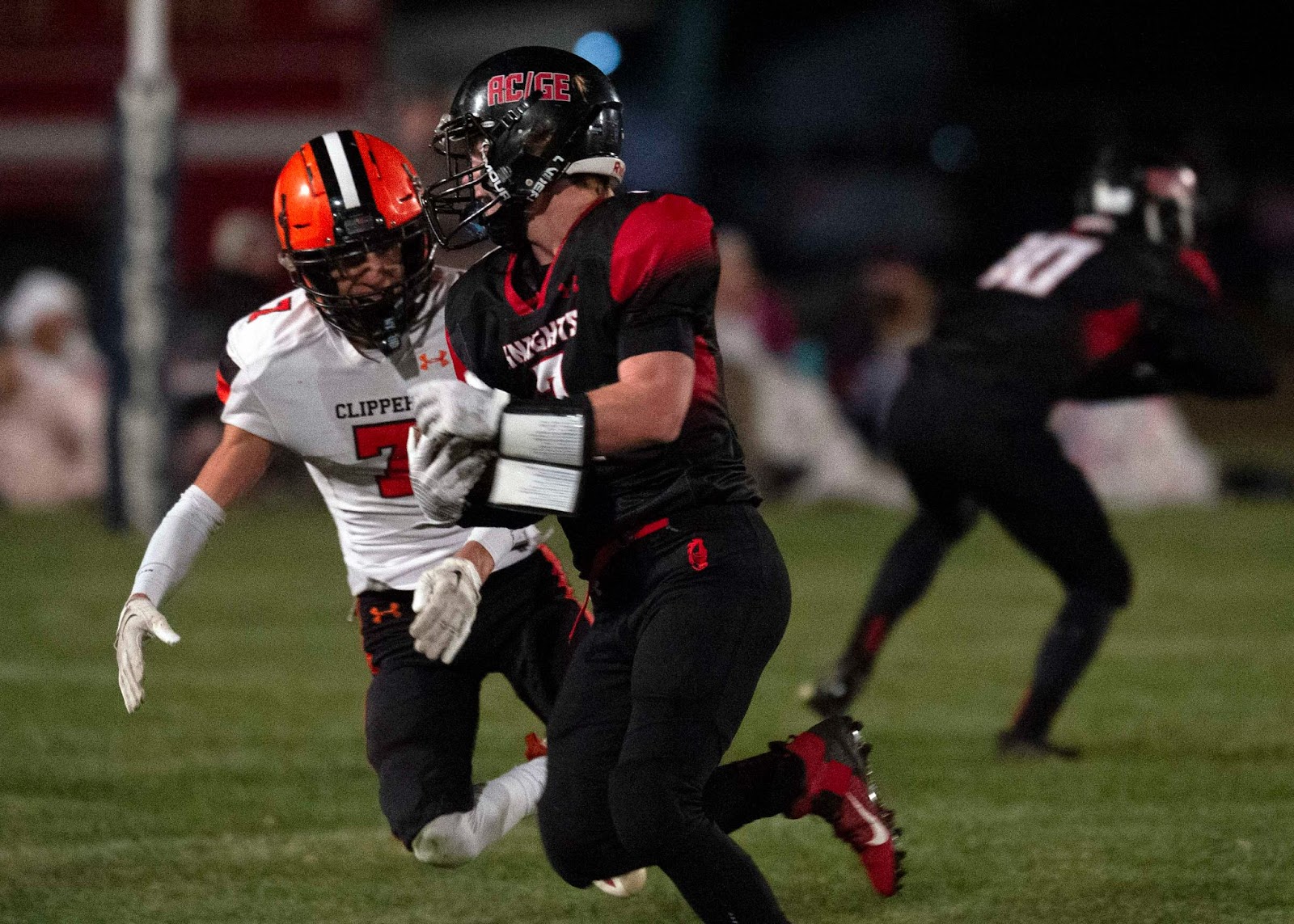 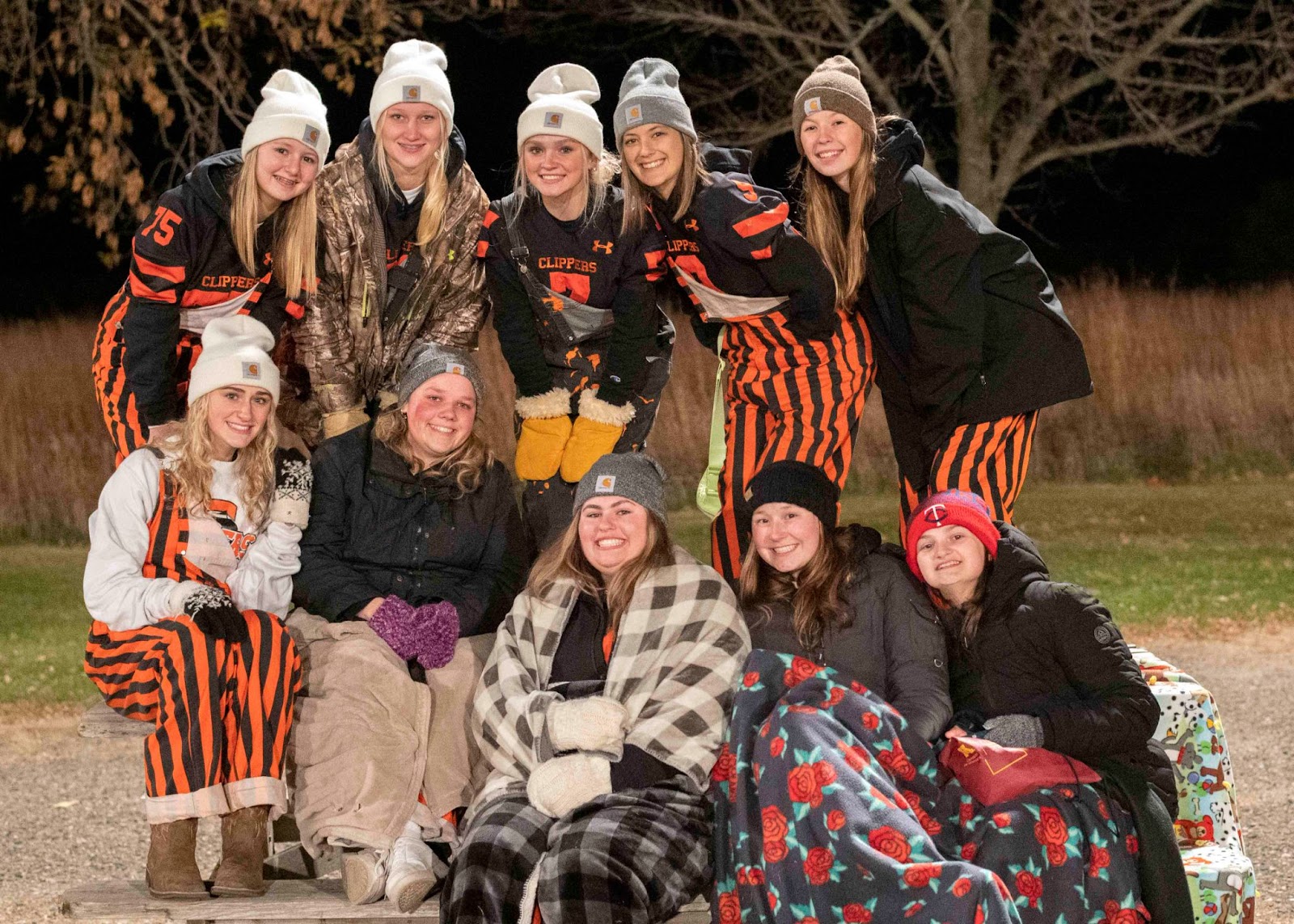 Not a lot of fans made the trip, but despite the cold weather, this group of students kept up the support on the sidelines. They are, from L-R, front row: Ava Hahn, Hailey Plonsky, Kyra McCarthy, Sarena Remiger and Katie Cink. Back row: Chloe Anderson, Madison Peterson, Greta Hahn, Mariah McCabe and Jersie Kelley. 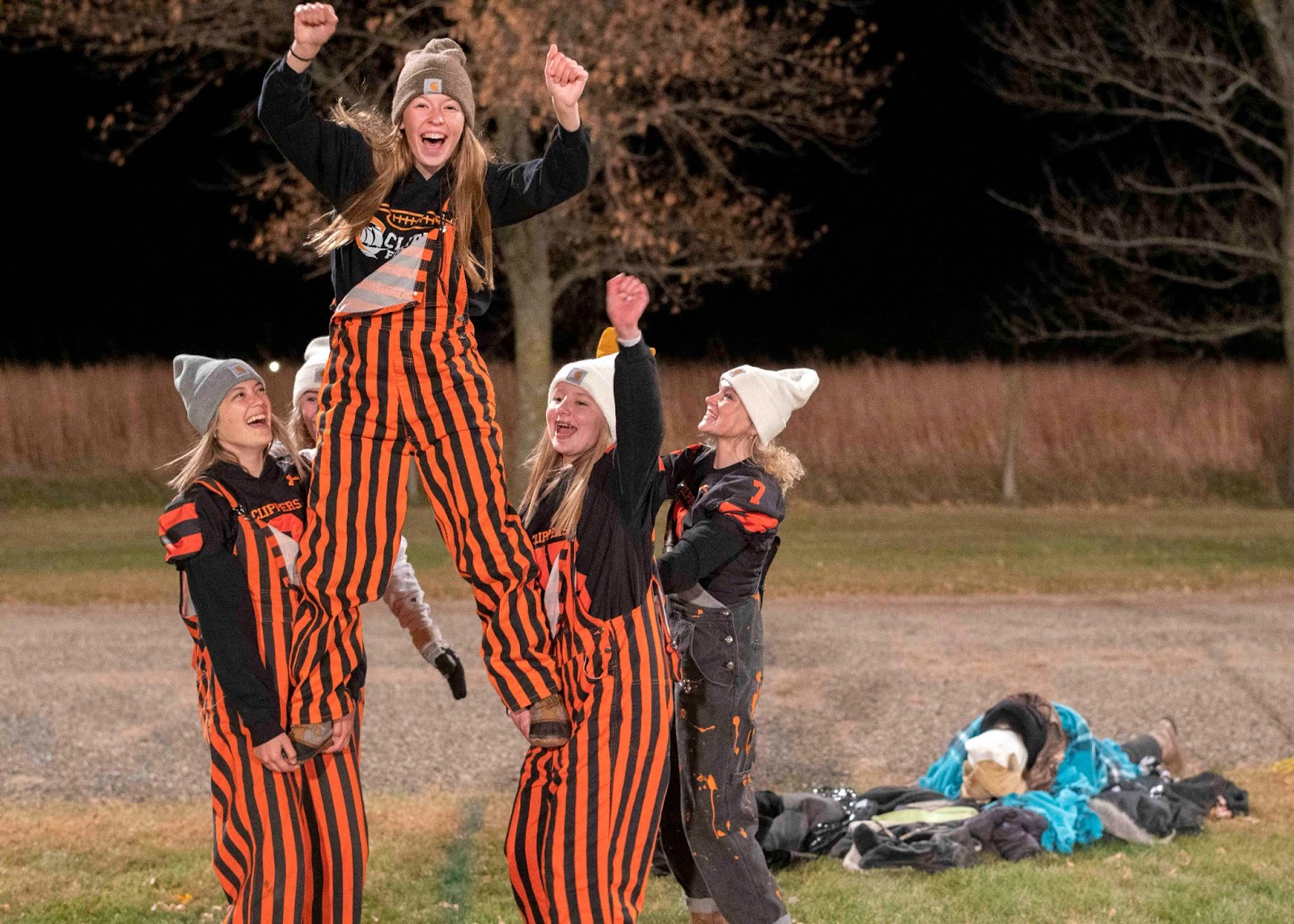 The bib girls made for a spontaneous cheer team. At the pinnacle is Jersie Kelley. Supporting her are Mariah McCabe and Chloe Anderson. Spotting are Ava and Greta Hahn.