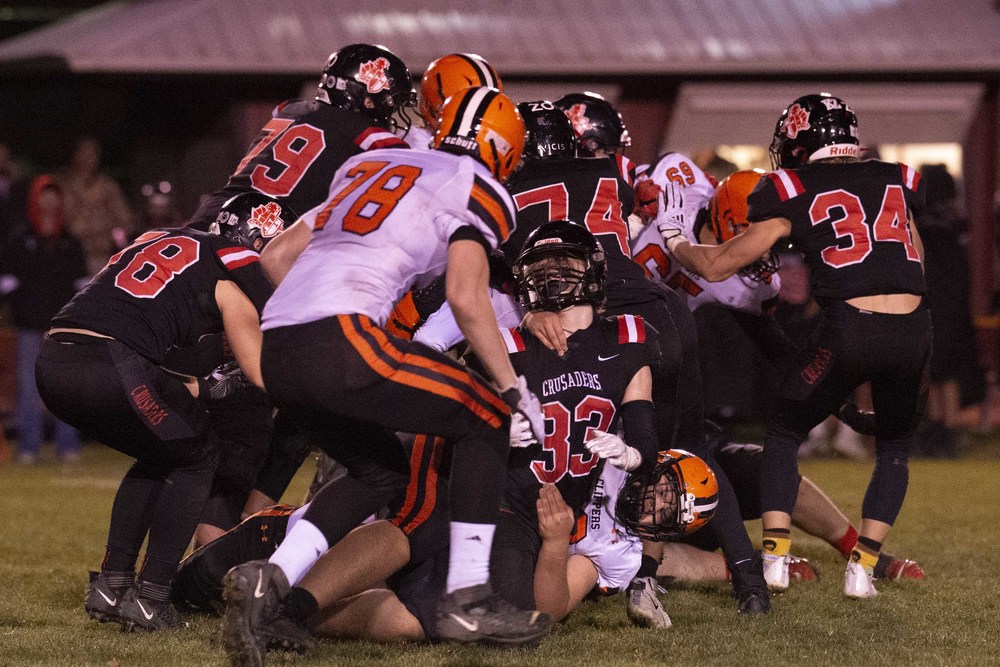 With only a few assisted tackles here and there over the Clippers’ first seven games this season, senior Martin Gibbs isn’t accustomed to hearing his name over a PA system.

But as host Mayer Lutheran was making its last touchdown drive on Wednesday, Gibbs was a pain in the Crusaders' side, battling at the line for a couple solo stops (above) and forcing a fumble.

“MARTIN GIBBS ON THE TACKLE.”

While Cleveland/Immanuel Lutheran fell 35-15 to the Crusaders, Gibbs, knowing his days in a Clipper uniform are numbered, upped his game. Besides his presence on the line, he ended the night with four solo tackles and one assist, not a bad effort against a hard running team that’s ranked eighth in the state.

“It was for all my teammates,” said the 300-lb tackle, who is playing in his first and only year.  “I really enjoy playing with them. We’ve had a couple quitters, and it’s very sad for me to see that, but it also drives me to play harder, play better because it’s my last time doing this. I love all my senior buddies, Henry (Strobel), Jacob (Rohlfing), Jack (Voit), so I want to make it up to them.”

“Marty is a guy who we always thought was built to be a football player,” said head coach Erik Hermanson. “Every year I recruited him, and it just wasn’t for him. He wanted to work. He works hard in the summer. He wants to make money, but this year, he really wanted to have a great senior year, and I think he’s made some awesome memories. He has gone from just learning how to play football to being a defensive starter who makes big plays.”

Hermanson said that Gibbs is an example of the rest of the Clippers.

The Crusaders took advantage of a Clipper fumble after the opening kickoff and scored on a 45-yard run.  They added 21 more points in the second quarter with two of the touchdowns coming after the Clippers punted and one when they picked off a  Lyons pass.

But, aided by a roughing the passer infraction and a 25-yard Blake Lyons-to-Carson Lyons hookup, the Clippers got on the board when Strobel booted a 24-yard field goal.

While Strobel’s kick was insurance against a goose egg, it also provided a jolt that carried into the second half, where the Clippers outscored the Crusaders 12-7.

“The spark that we had tonight helps us to remember football is fun,” Hermanson said. “It helped us to never quit. The guys that are here give all they’ve got. They will do anything for the town and the team and the program, and tonight they got to reap the rewards and have fun and score and remember why football is so great.”

Mayer Lutheran turned the ball over on downs in the first possession of the second half, but the Clippers punted, and the Crusaders engineered an 83-yard drive that, with the PAT kick, put them in front 35-3.

But the Clippers never waved a white flag. After the kickoff, the Lyons-Lyons tandem struck for 30 yards. Kale Kelley followed up with a 30-yard catch that took the Clippers to Lutheran’s 10.

A holding penalty made for a 10-yard setback, but on the next play, Kelly took a Lyons pass to the one. From there, Blake Lyons found Strobel all alone on the right side for a touchdown. Strobel’s PAT kick just missed, but the Clippers had another six points to bank on.

After the ensuing kickoff, the Crusaders turned the ball over on downs at the Clipper 10, but Blake Lyons found Kelley in the flats. The sophomore broke free for a 90-yard sprint across the goal line. Strobel’s PAT kick missed for the 35-15 final.

The Clippers had just two penalties, which resulted in 16 yards lost. Mayer had six penalties for 88 yards.

In a solid effort behind the snapper, Lyons completed half of his 26 attempts for 236 yards. With seven catches for 143 yards. Kelley was his favorite target. Carson Lyons hauled in three of his brother’s passes for 91 yards. Strobel caught just one pass, but it was an important one. Bode Bartell also caught one pass for 1 yard. Munya Kuvaoga caught one pass for 7 yards.

Strobel booted three punts for a total of 106 yards with his longest 45 yards.

Repeating the scenario from a year ago, the Clippers travel to Lester Prairie on Tuesday for their first section game. LP, 6-0, is ranked second in the state. The Clippers fell to the Bulldogs 33-0 in the regular season. 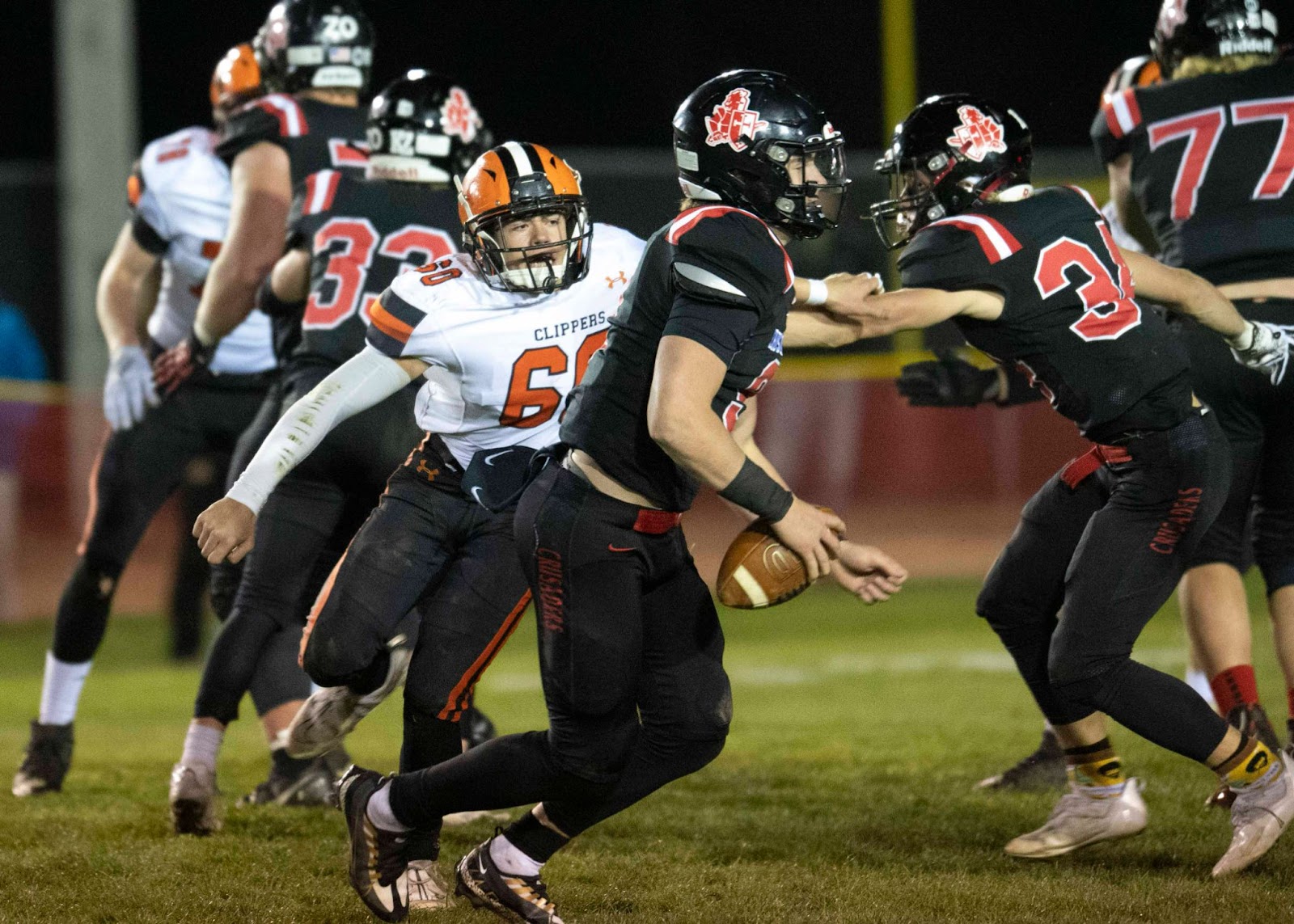 Gabe Sullivan covered a lot of ground on defense. Here he goes after the Mayer Lutheran quarterback. 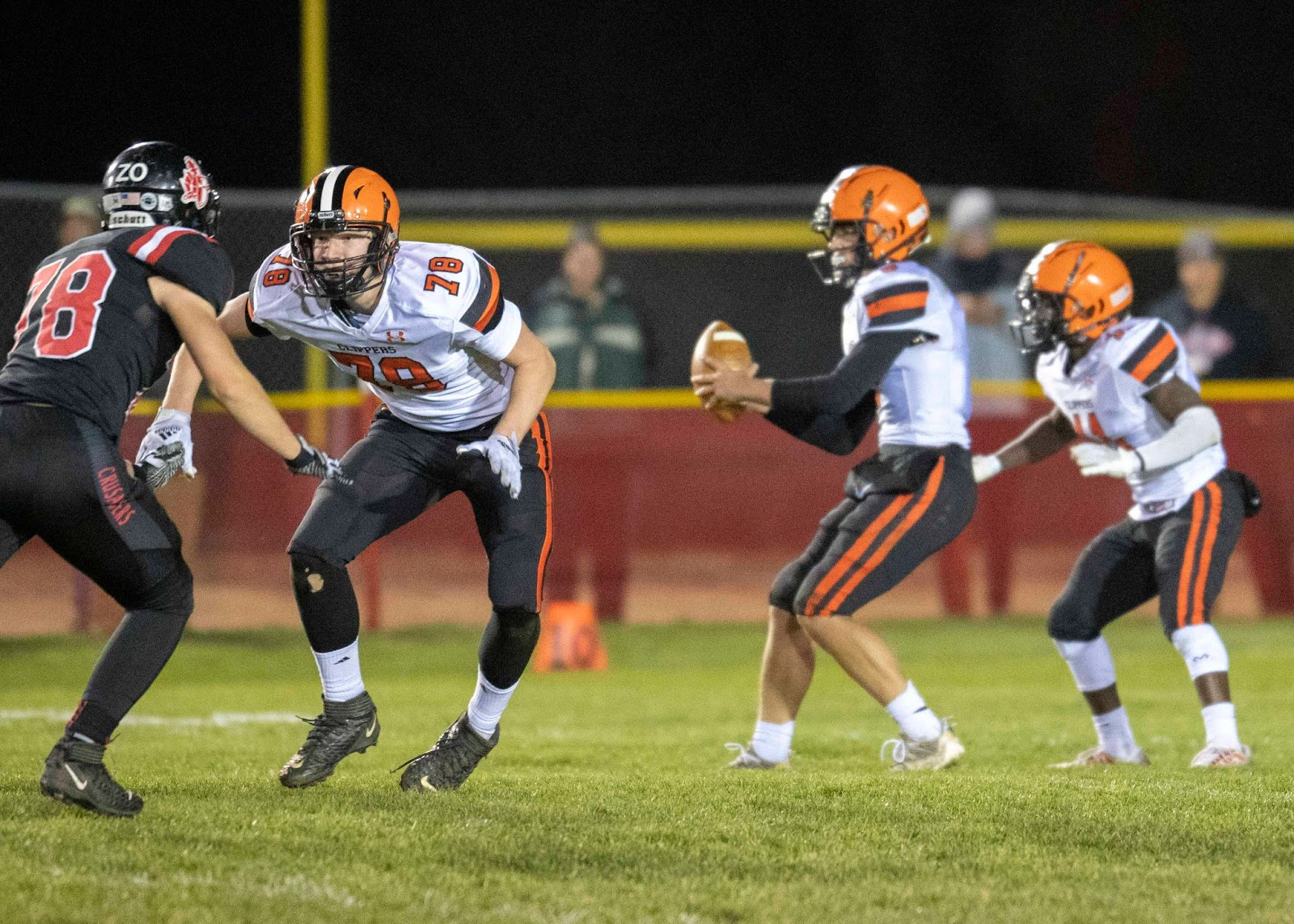 Jacob Rohlfing on the pass block. 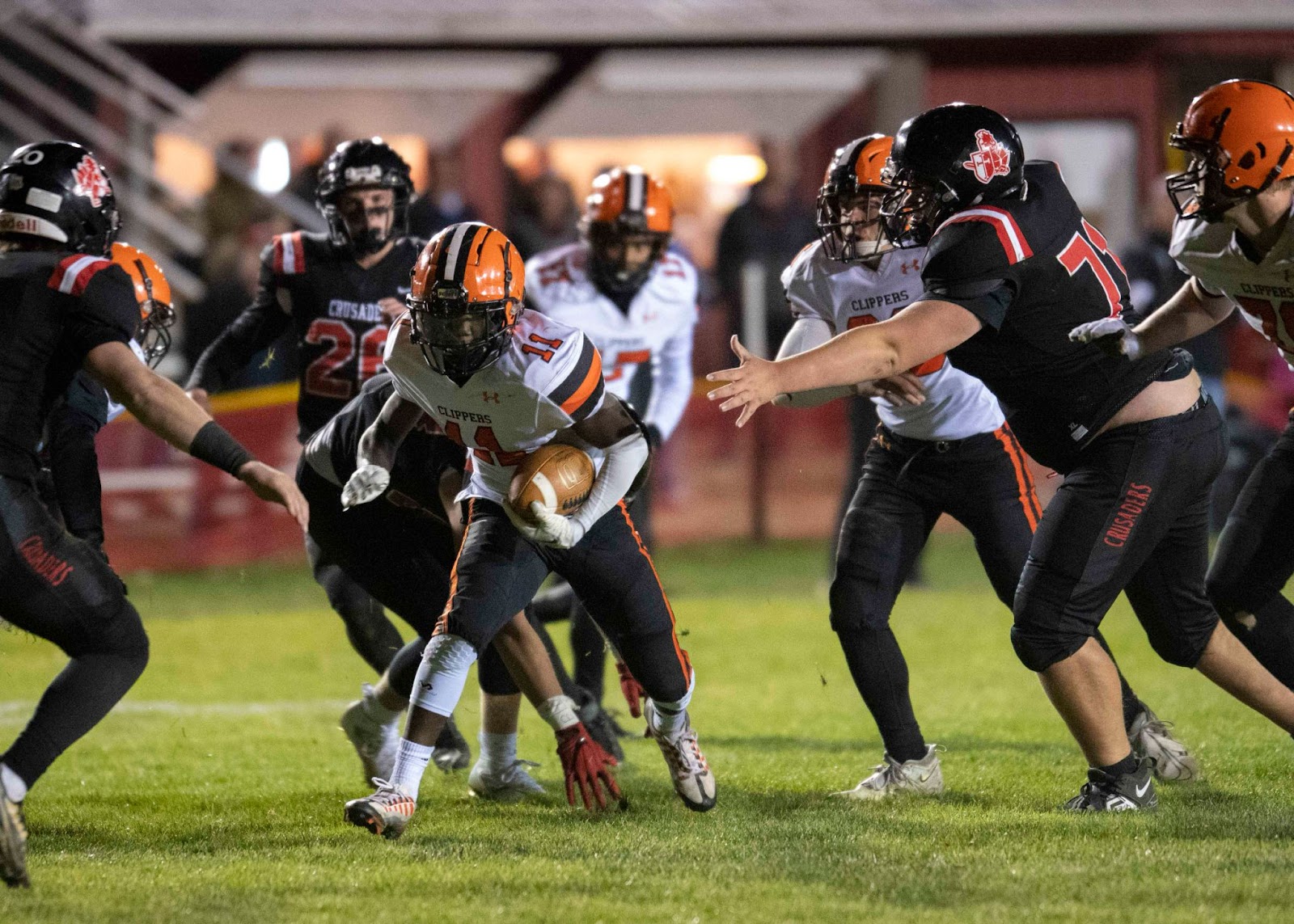 Henry Strobel bursts through an opening. 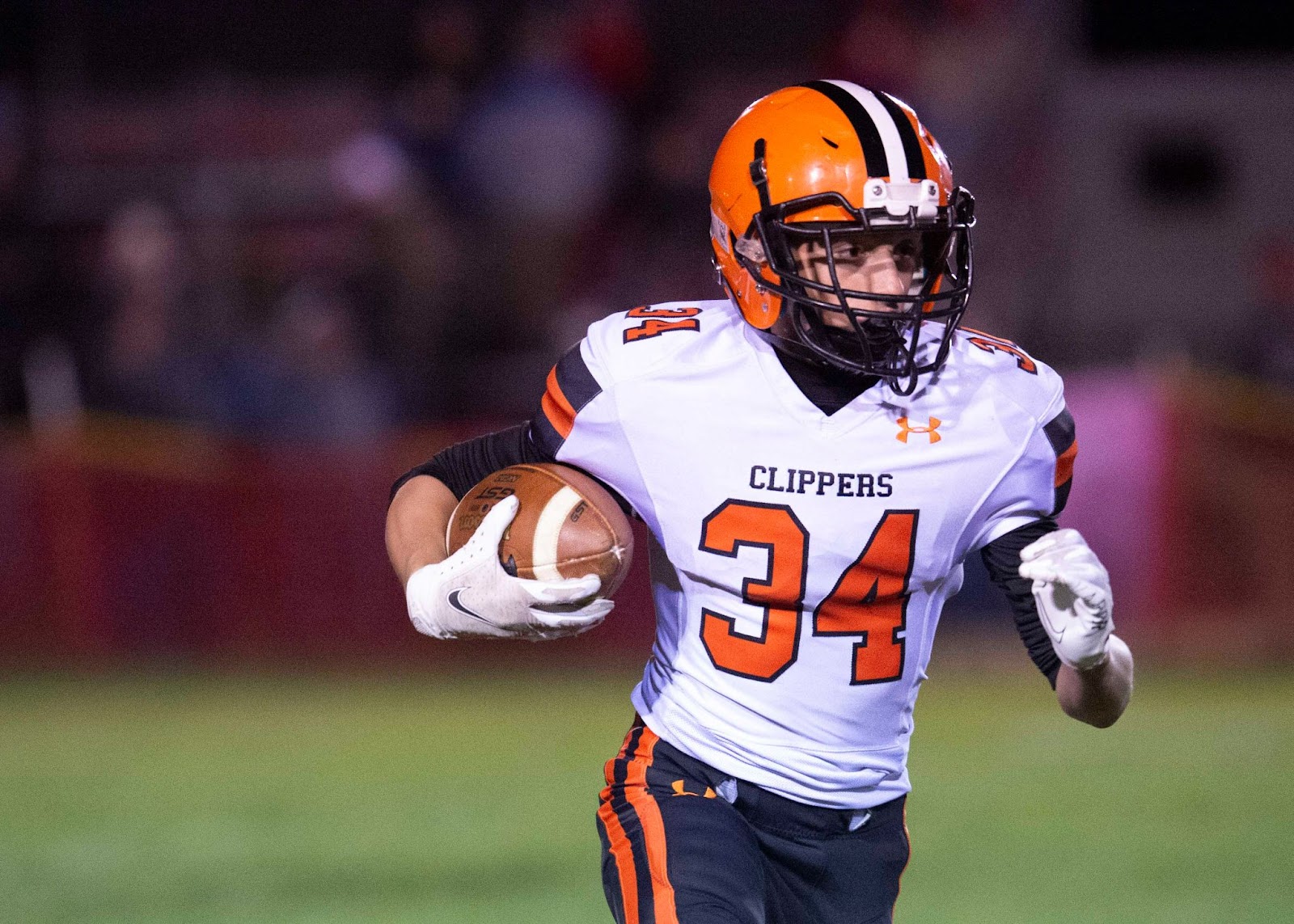 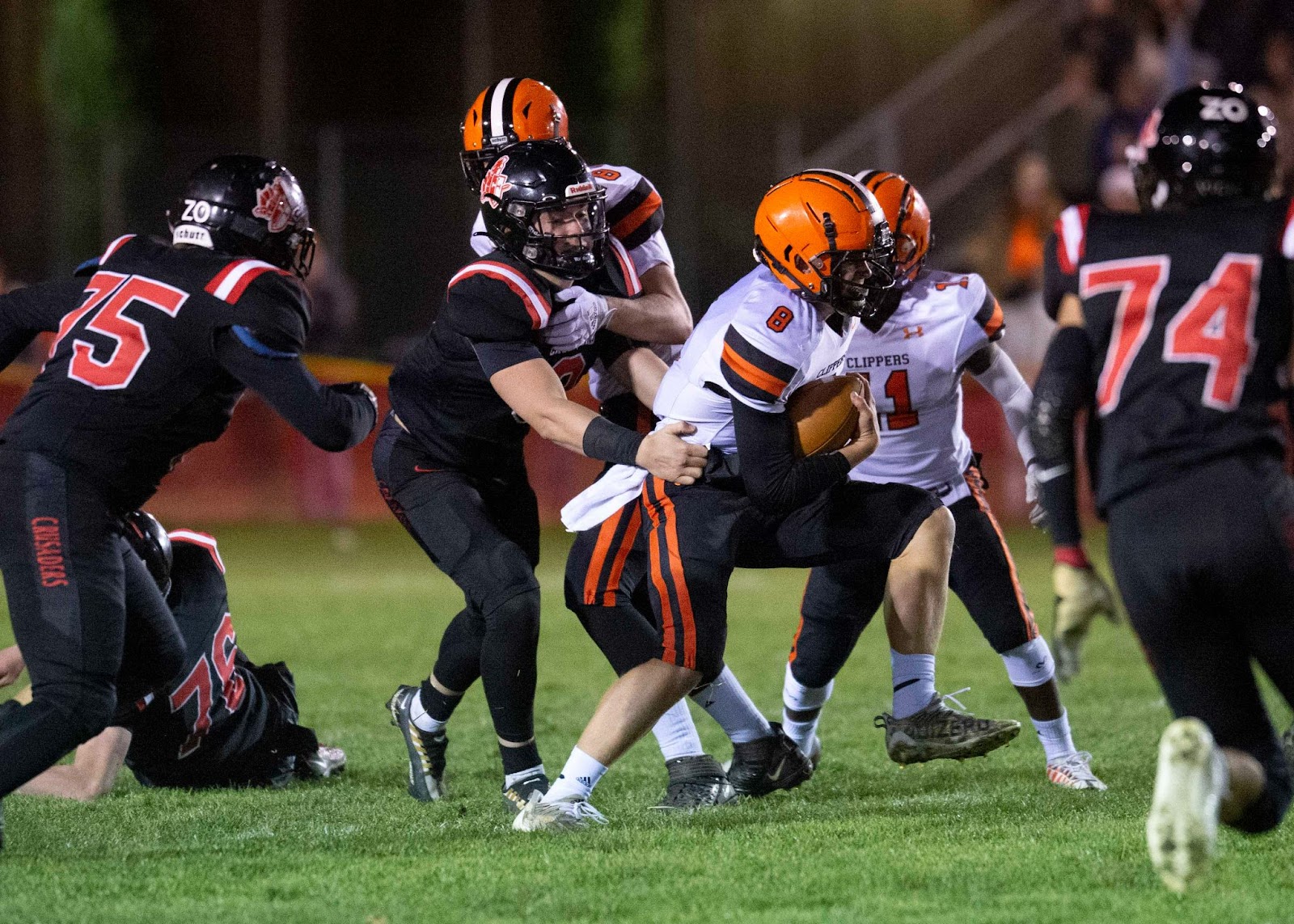 Blake Lyons on the run. 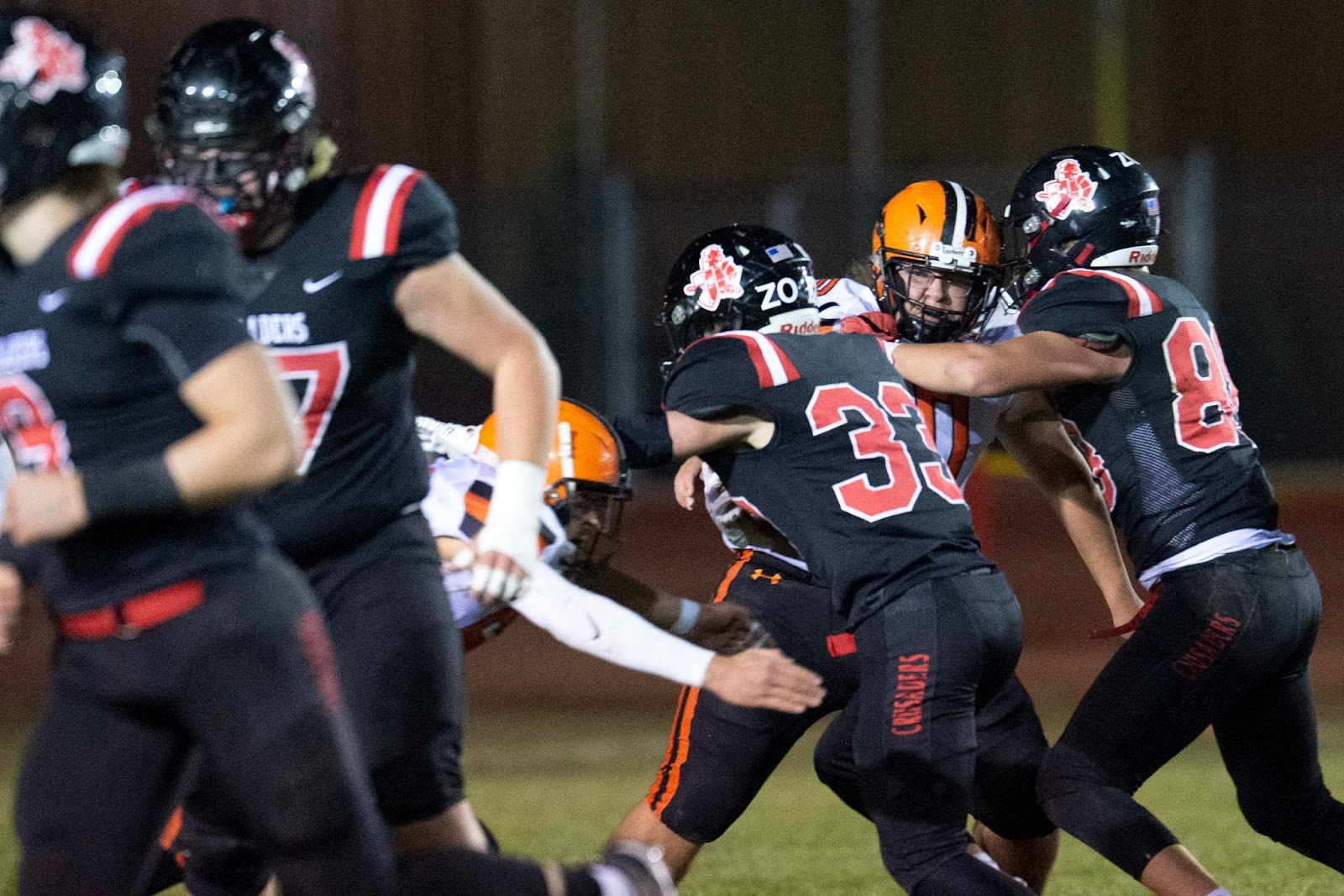 Marty Gibbs moves in for a tackle. 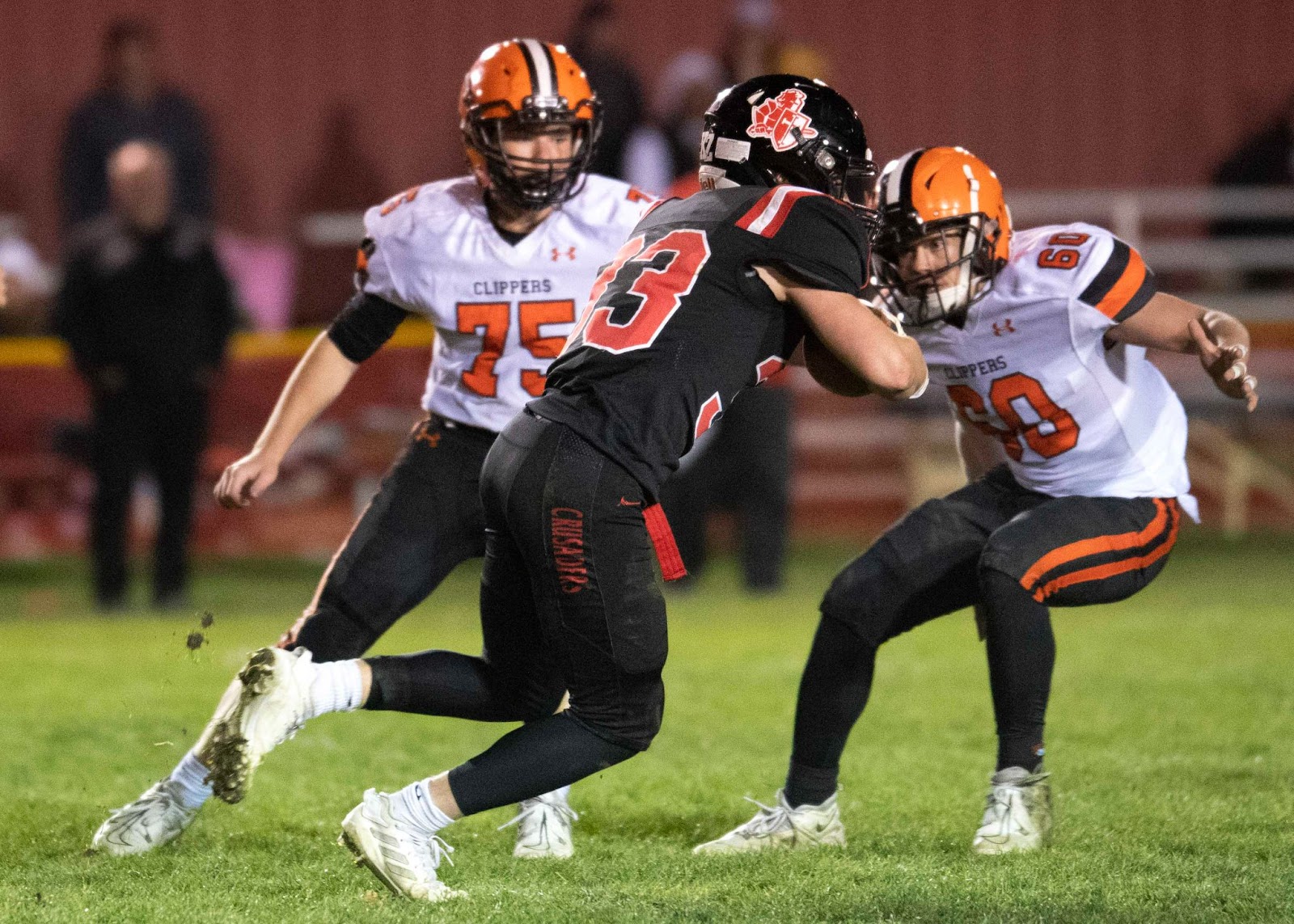 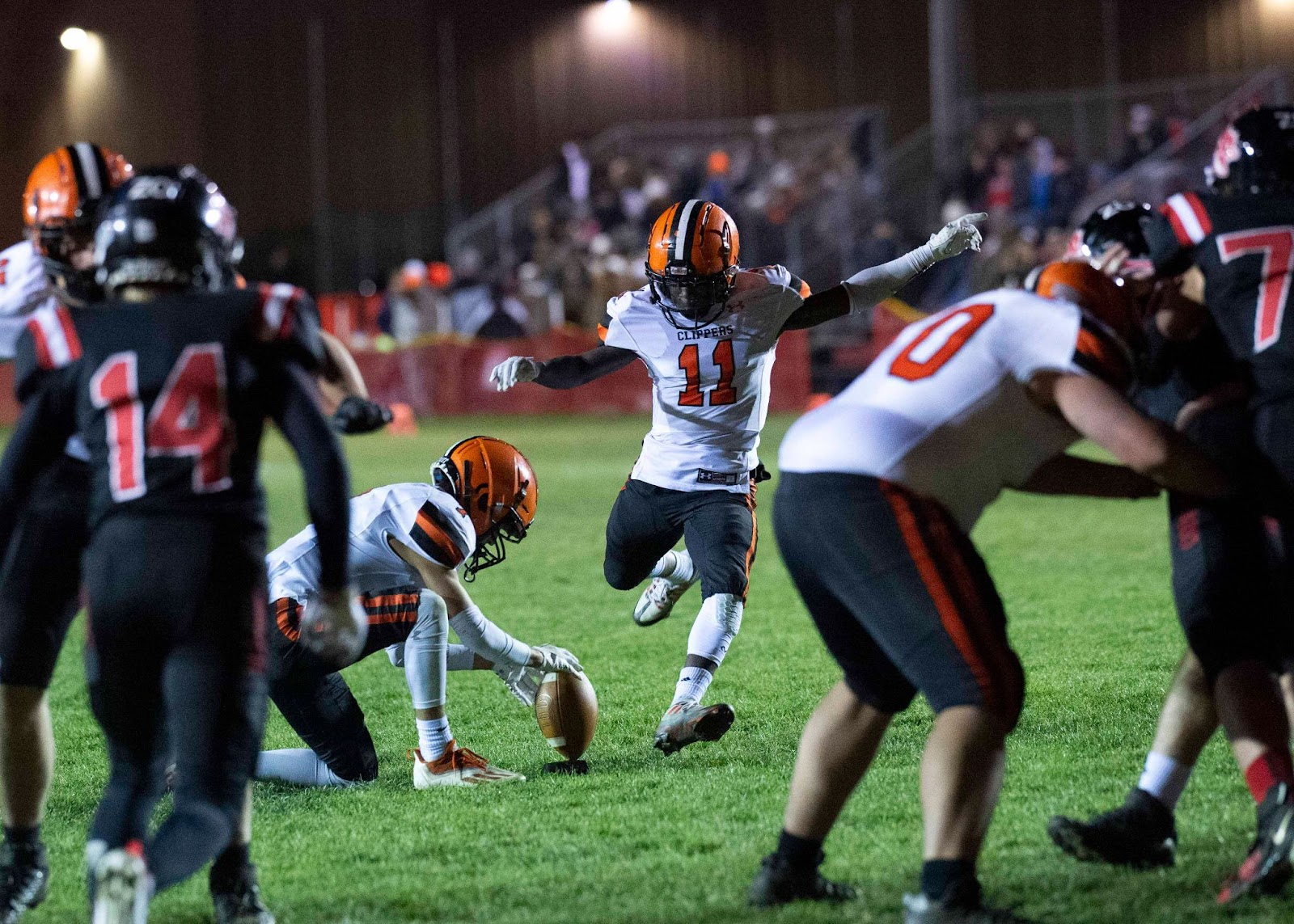 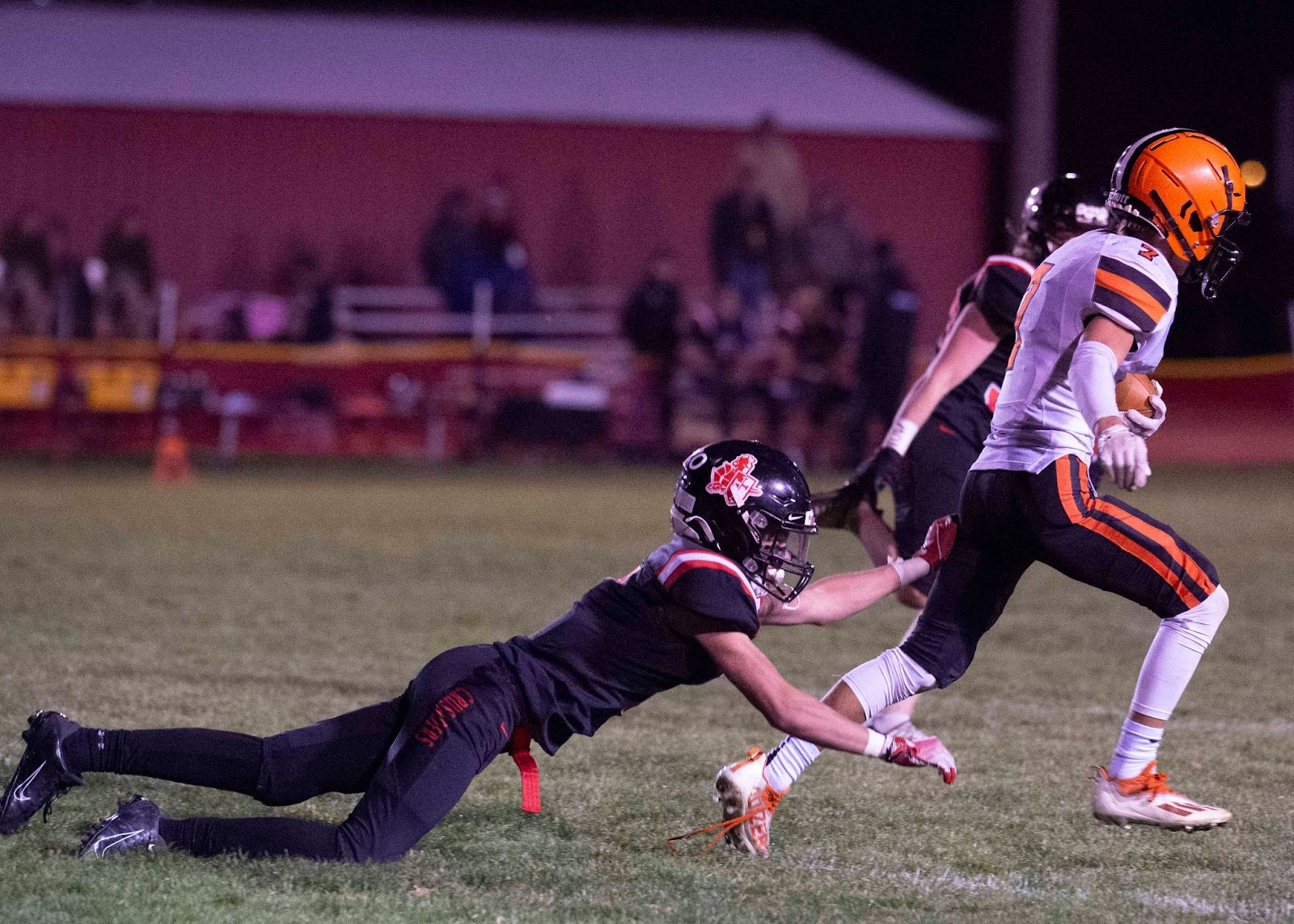 Like the cameraman, the Crusaders only saw Kale Kelley’s back on his 90-yard TD catch and run. 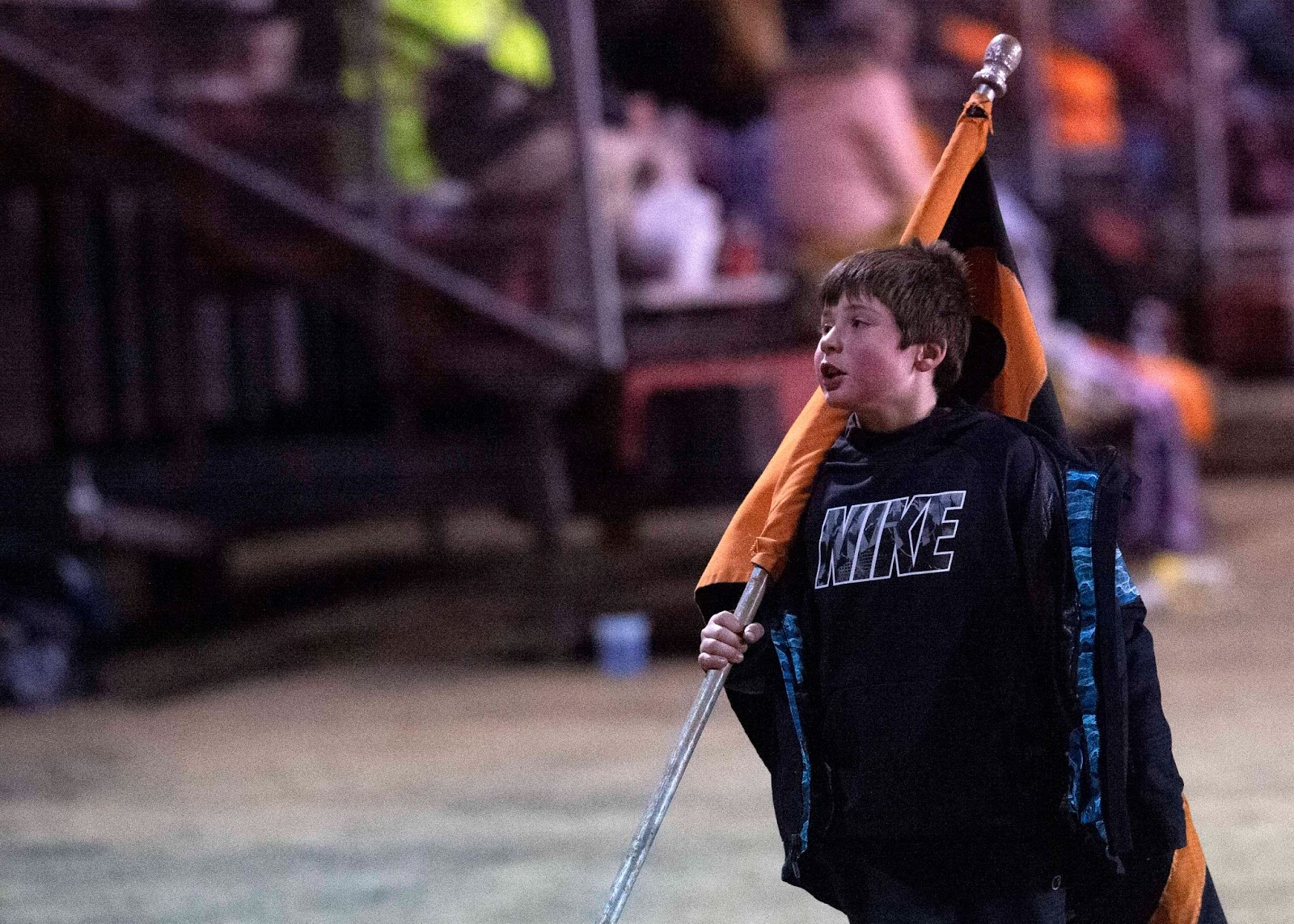 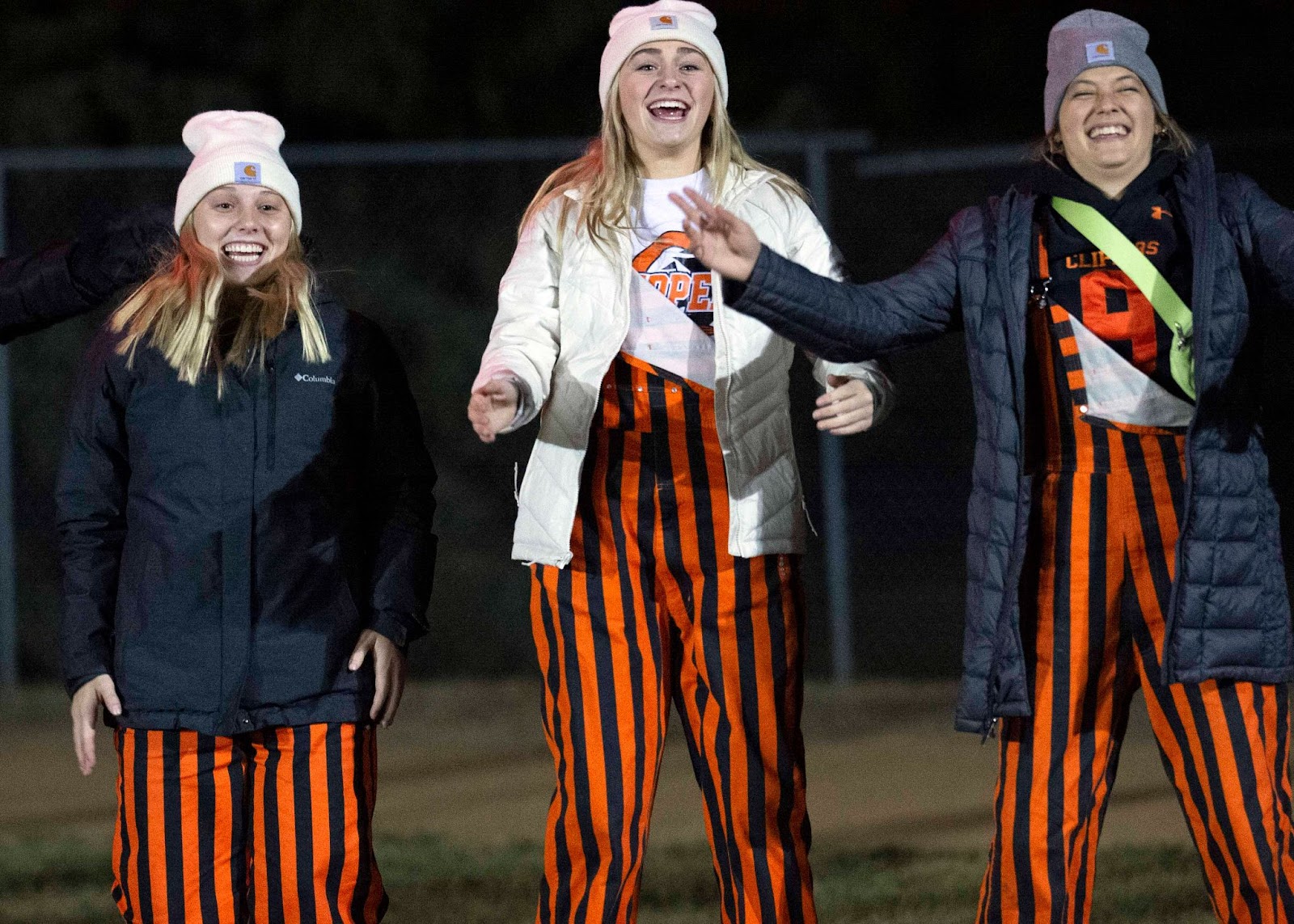 The bib girls got a kick out of Keegan Karels’ trip with the Clipper flag. They are, from L-R, older sister Kaylee Karels, Ava Hahn and Mariah McCabe. 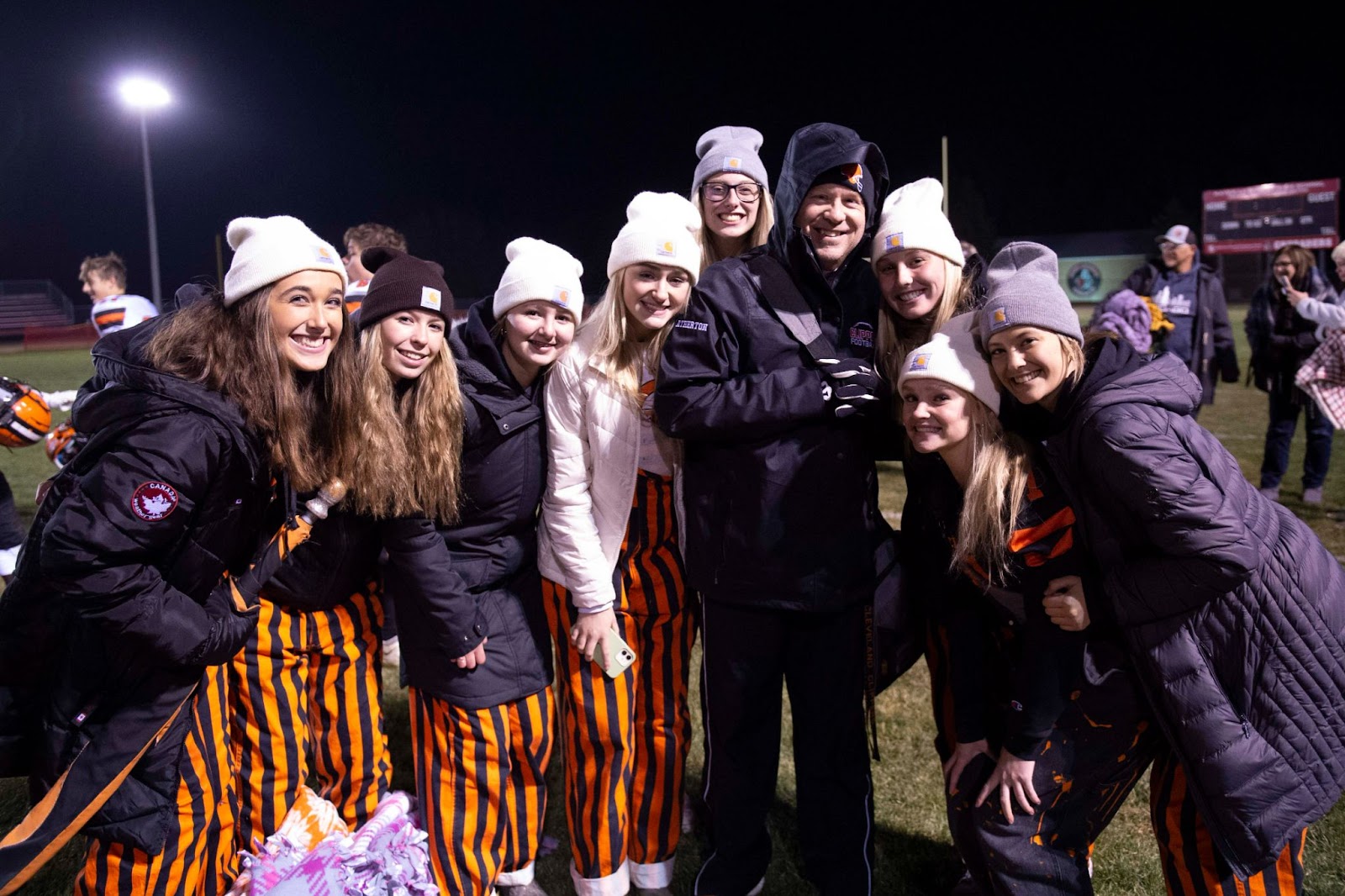 While the Clippers have no mascot or cheerleaders, they do have the bib girls. Here they pose with assistant coach Kyle Atherton. They are, from L-R, Laci Hollerich, Jersie Kelley, Chloe Anderson, Ava Hahn, Harley Connor, Kaylee Karels, Greta Hahn and Mariah McCabe.