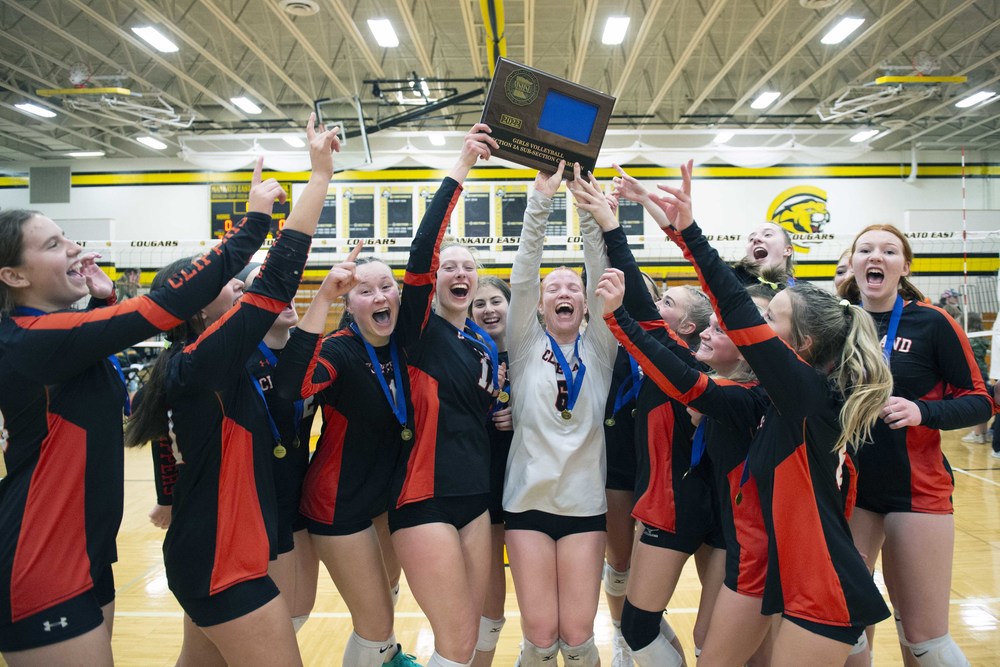 Struggling to bounce back after decisively winning the first game against Cedar Mountain in the subsection final on Thursday but losing game two, the Clippers were up by three points when Melia Sathoff went to the line for a serve.

The eighth grader’s effort was a total miss hit, said head coach Dave Nixon, but somehow it still managed to catch the corner, and the Clippers pulled in front 19-15.

“We so needed that serve by Melia. I thought it was a huge turning point when it hit the line. It just helped to tell us to be confident, like ‘we’ve got this.’”

While Sathoff struggled a bit early, Nixon stuck with her, and her kill in game four punctuated a 25-16 triumph. For the second year in a row, the Clippers topped Cedar Mountain in the subsection championship.

“We needed that spark off the bench,” Nixon said. “It took a little time, but she got better and better. From what I’ve seen over the last month, she plays really well, and I needed to trust it, for her to be able to serve and hit, and she came through.”

The Clippers will return to St. Peter on Saturday to take on Mayer Lutheran for a chance to make the state tournament. In the section championship a year ago, the Crusaders beat the Clippers in a hard fought 3-0 battle before they went on to win the state Class A title.

A Lexy Waldron kill was the first point of game one, and the Clippers never gave up the lead from there. Sarena Remiger followed with a changeup, and with a pair of kills from Ava Hahn, Cleveland led 5-1.

On a kill, a carry infraction and an ace block, the Cougars pulled within one, 5-4, but after a Hahn service ace, a Remiger kill and a couple of Harley Connor ace blocks, the Clippers pulled in front 12-7.

The Cougars only scored intermittently from there, and Hahn kept on the attack for the Clippers in a 25-14 triumph.

“We were clicking on all cylinders, and it wasn’t clicking for them,” Nixon said.

But the Cougars turned the tide in the next game.

The Clippers got off to a good start though. Connor dropped a long hit to the corner for the first point. Keeping on the attack, they led 6-2, but the Cougars ran for six points from there, half coming from kills and the other three points on Clipper errors.

“I knew they weren’t going to go out like in the first game, and they stepped it up big time,” Nixon said. “Cedar Mountain is a heck of a team. I was really impressed with their setter, their outside, their middle. After the first game, they came out, and they were not letting the ball hit the floor, and we did not have the same firepower; we placed the ball to short sometimes, and they were digging everything.”

A Remiger kill put the Clippers within two, 20-18, but Cedar Mountain scored the last five points for the 25-18 triumph.

Game three was a tight one, but with the score tied at 13, a Sathoff kill gave the Clippers a lead they would never relinquish. The Cougars got called for a double touch, Emma Sweere served an ace, and Sathoff came up with another kill before her service ace just managed to stay in bounds.

“We had to swing, and we got back to doing that,” Nixon said.

Down the stretch, Remiger swatted a kill, Connor airmailed a pair of service aces, and the game ended 25-17 when the Cougars couldn’t contain a hit.

The Clippers had a close second game when they beat Springfield on Tuesday, and that taught Connor that the Clippers could put a bad game behind them.

“They finally found holes, and we didn’t adapt well, but we had a lot of energy the first game, and I knew we could come back to that,” said the senior outside hitter. “They were are a scrappy team, and it was really hard for us to find holes, but the bench was telling us where to put the balls.”

On a Sathoff attack, the Clippers tied game four at 7 and, after the Cougars sent a couple of hits out of bounds on the next two points, never lost the lead from there. With Hahn lighting it up from the net, the Orange & Black nation kept on the attack for the decisive win.

Adjusting to the Cougar defense, Hahn led the attack force with 19 kills. Her sister Greta Hahn had 47 set assists.

Ava Hahn said having her older sister set to her has its pros and cons, but she wouldn’t choose anyone else.

"The middles did a great job,” Nixon said. “On Tuesday they had an off night, but I told them before the game that they were going to play awesome, and they did. I can’t say enough about our senior leadership.”

Connor had two ace serves. Meyer was 17 for 17 from the serving stripe while Greta Hahn was 11 for 11 and Waldron was eight for eight.

“Everyone competed really well tonight,” Nixon said. “We worked our butts off because we had to. We needed this match, because everybody played well, and we needed that for our confidence: to show this is how we can play.”

The Clippers will have to pull out all the stops if they want to compete with Mayer Lutheran, Nixon said. 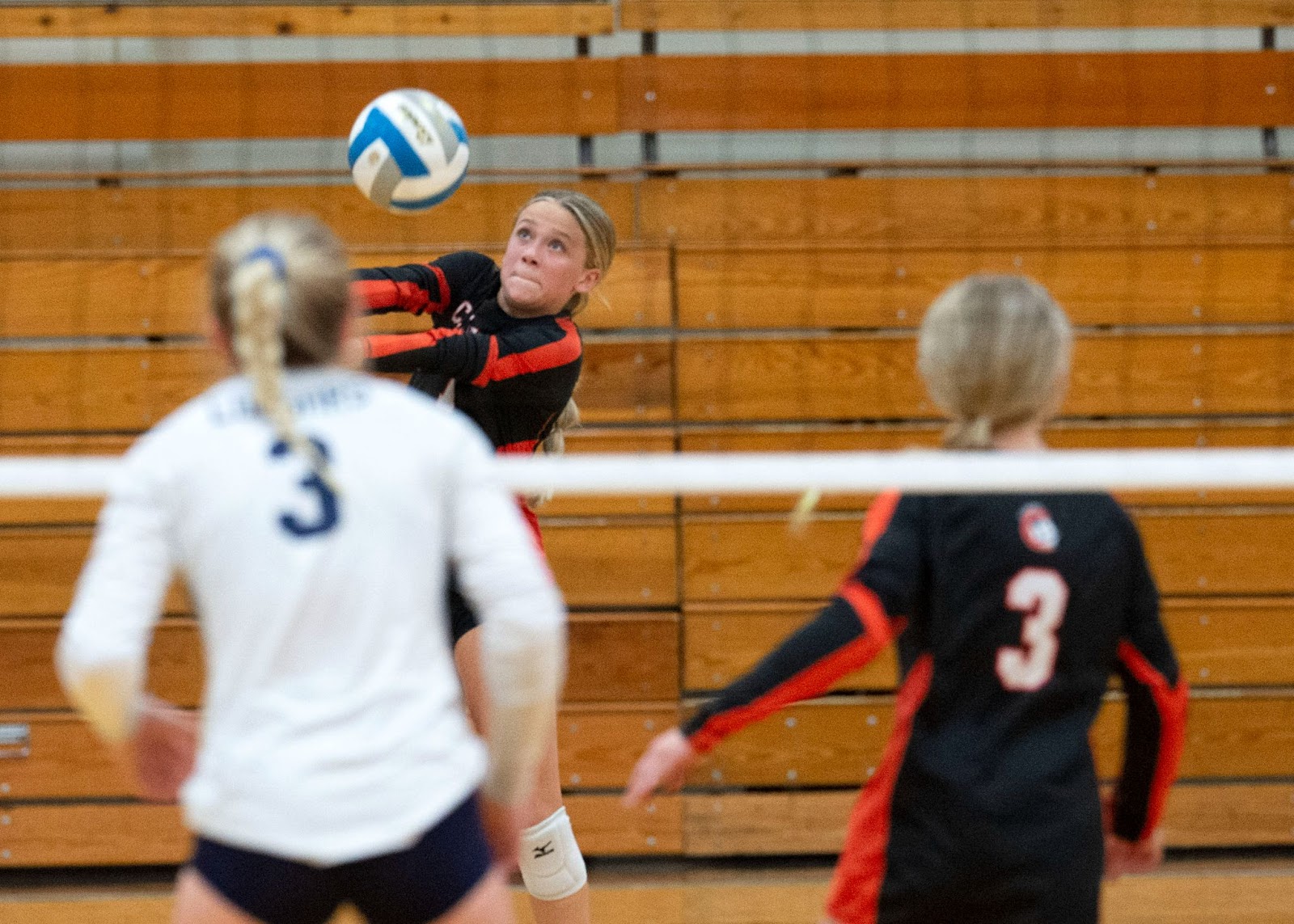 Savanna Meyer on the pass 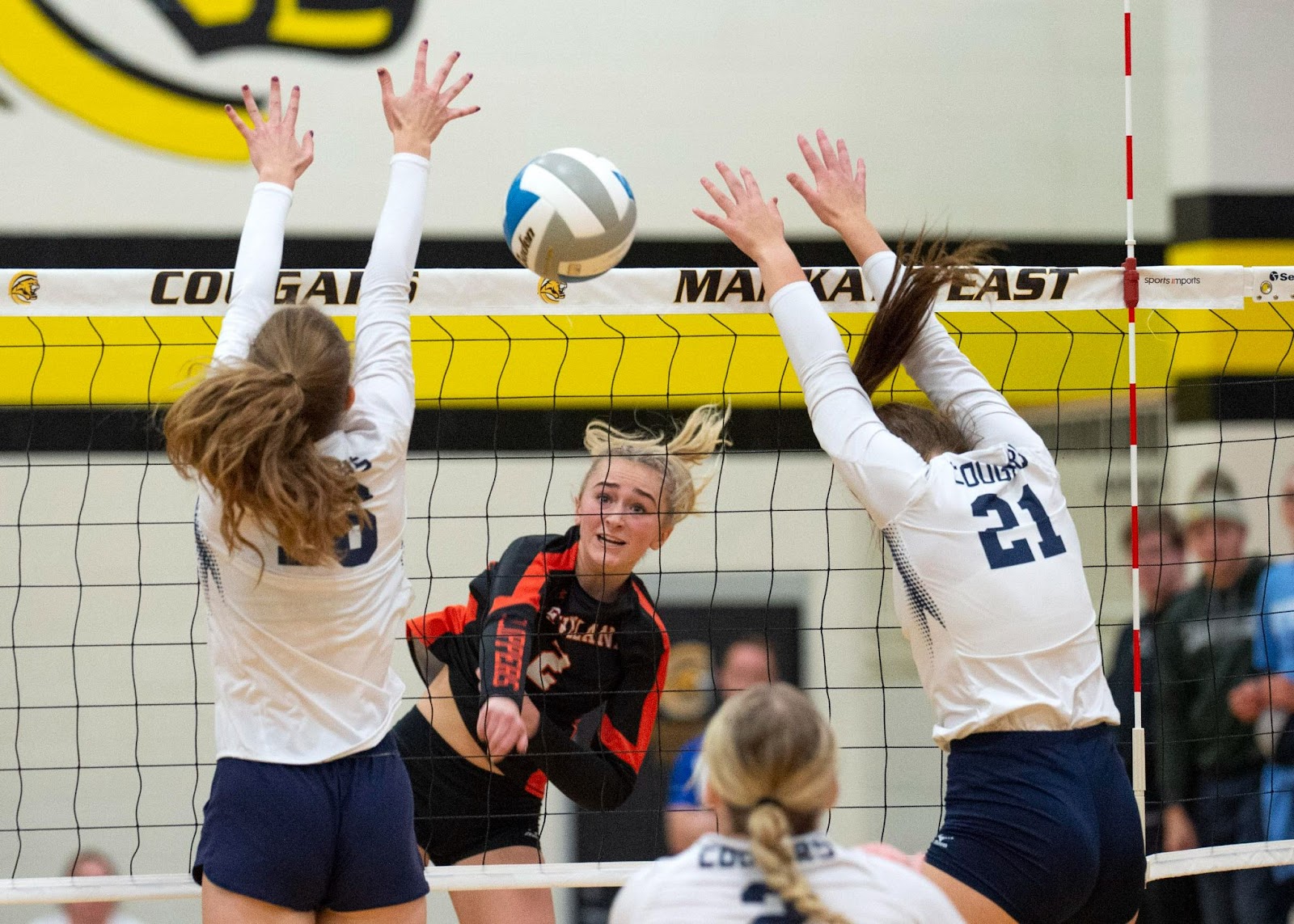 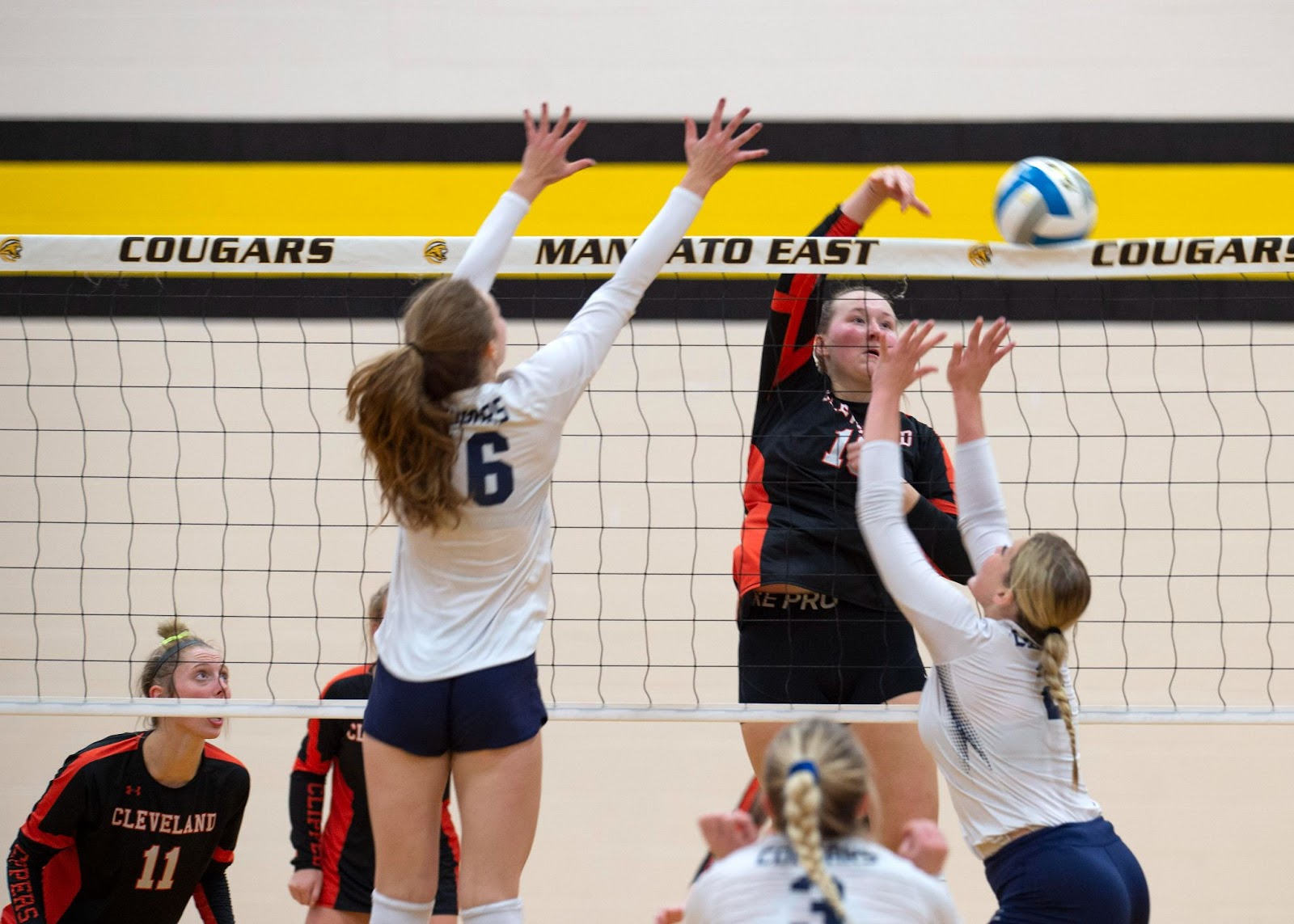 Sarena Remiger on the stuff 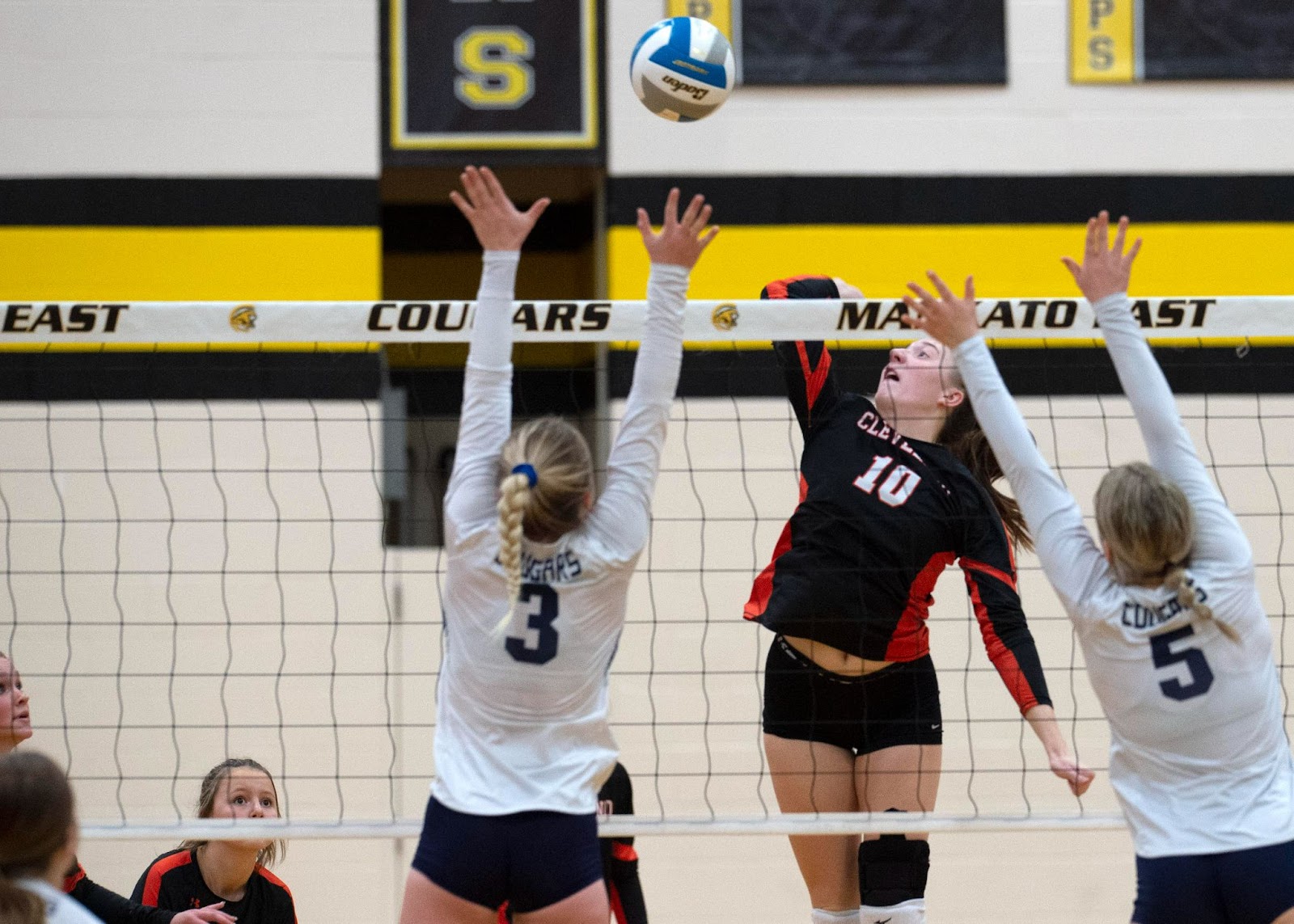 Lexy Waldron coils for a kill. 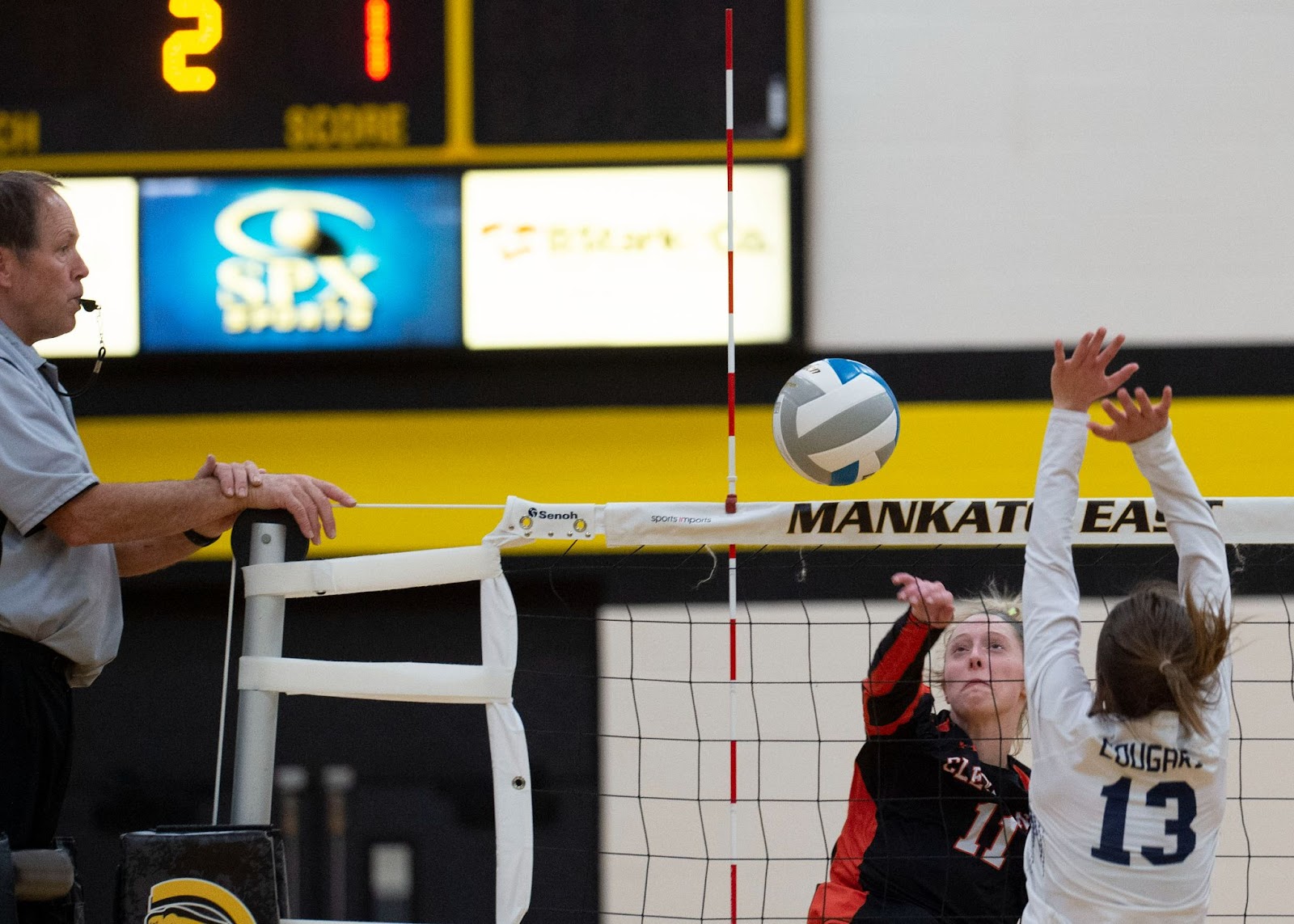 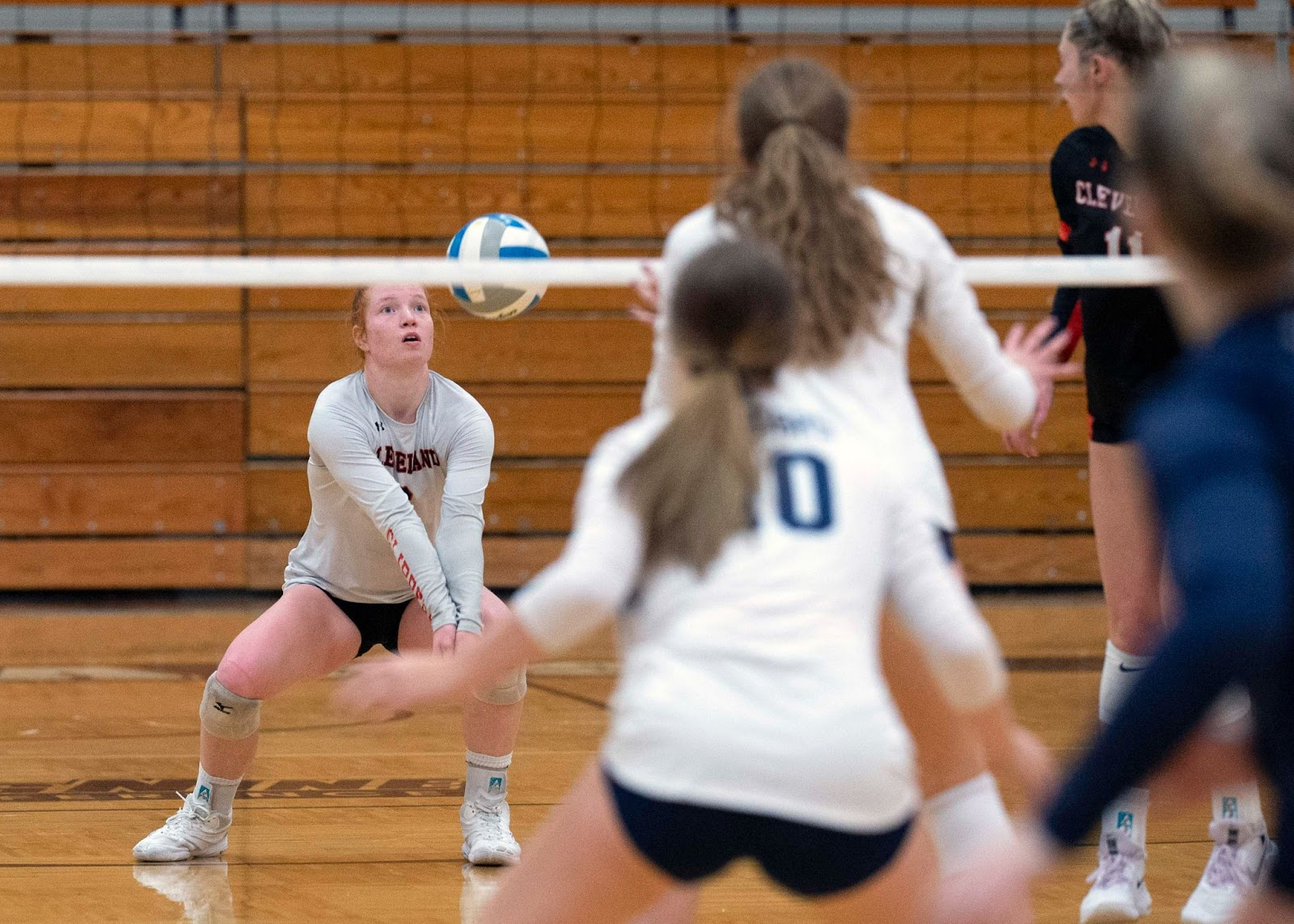 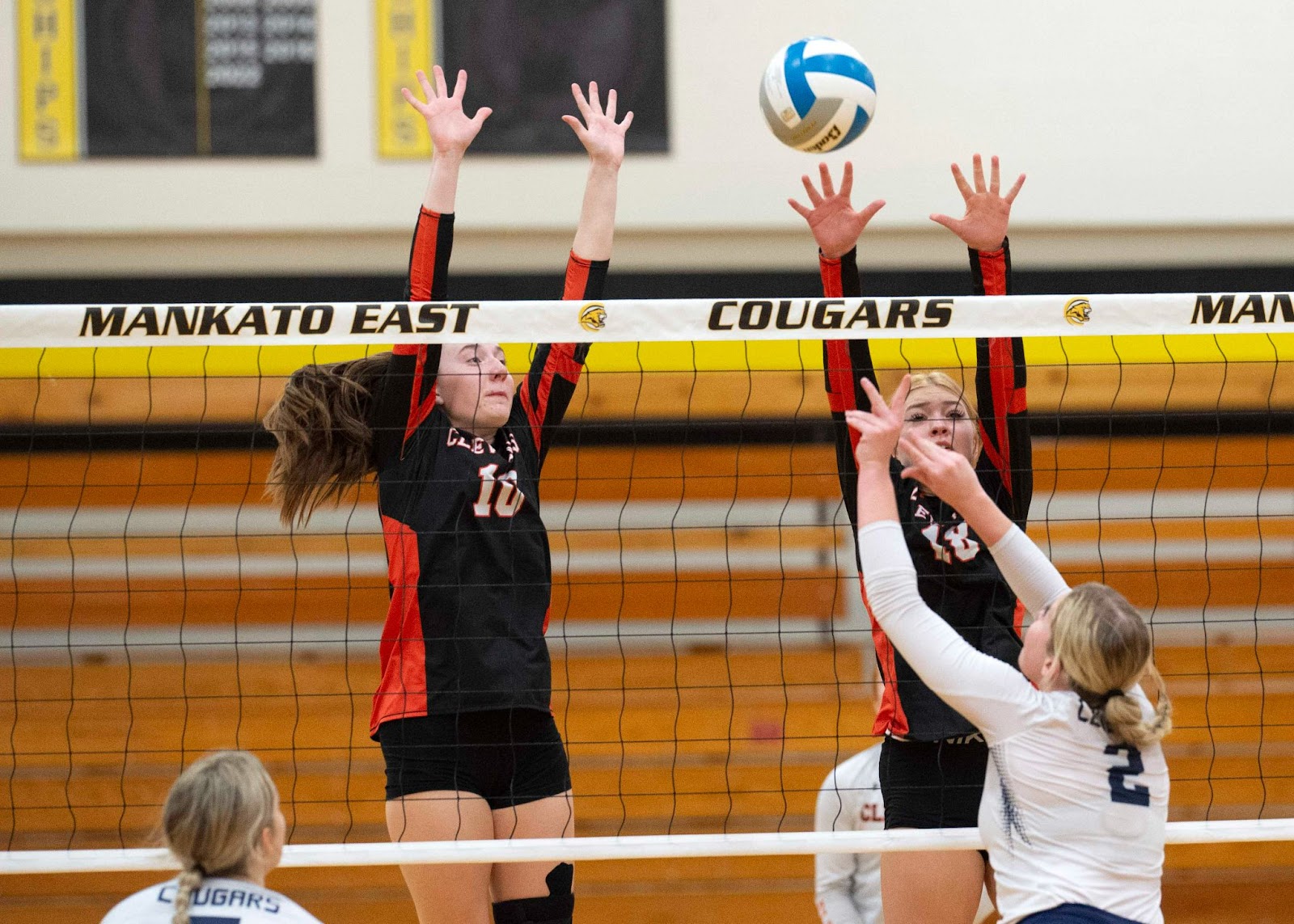 Lexy Waldron and Melia Sathoff leap for a block attempt. 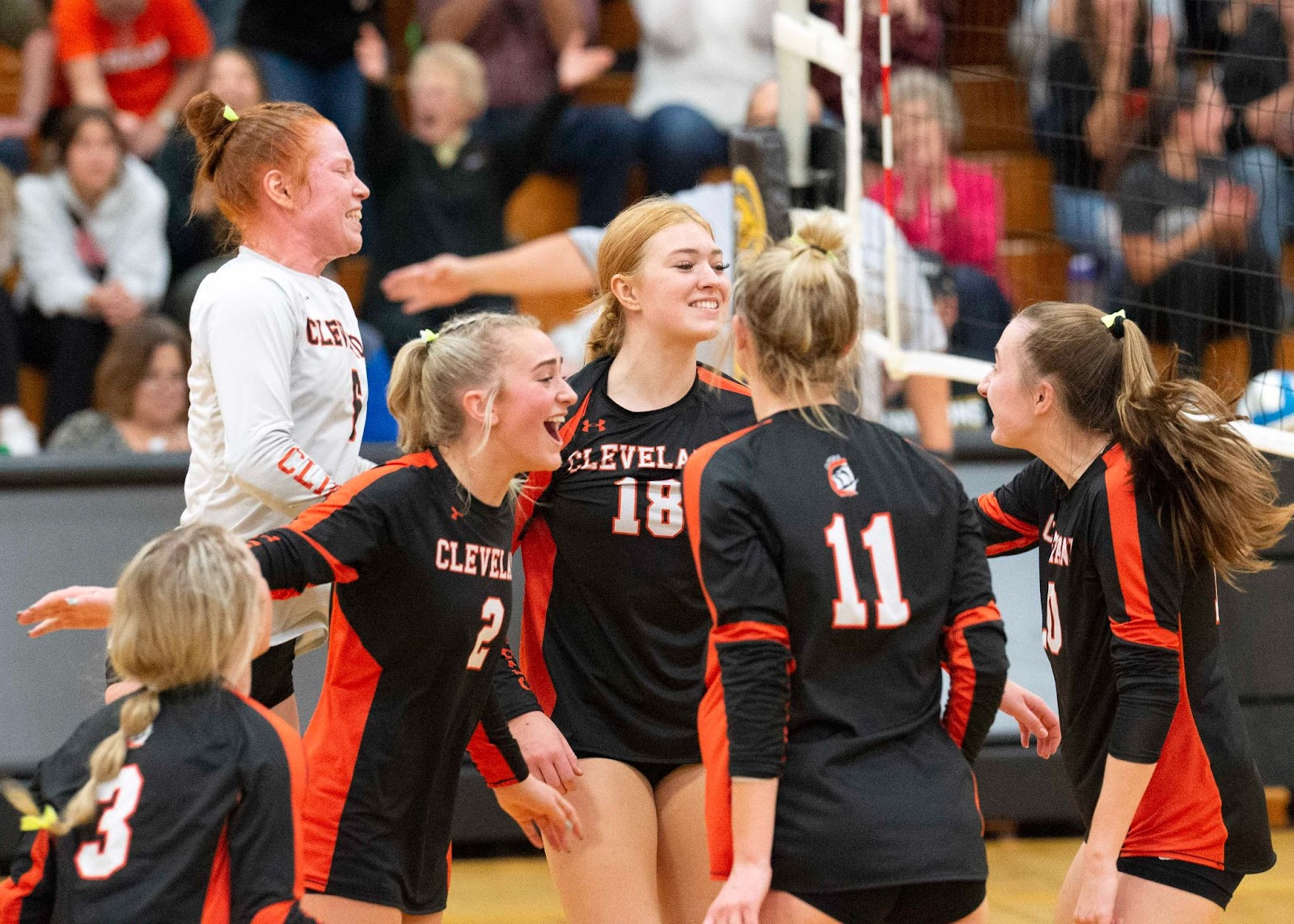 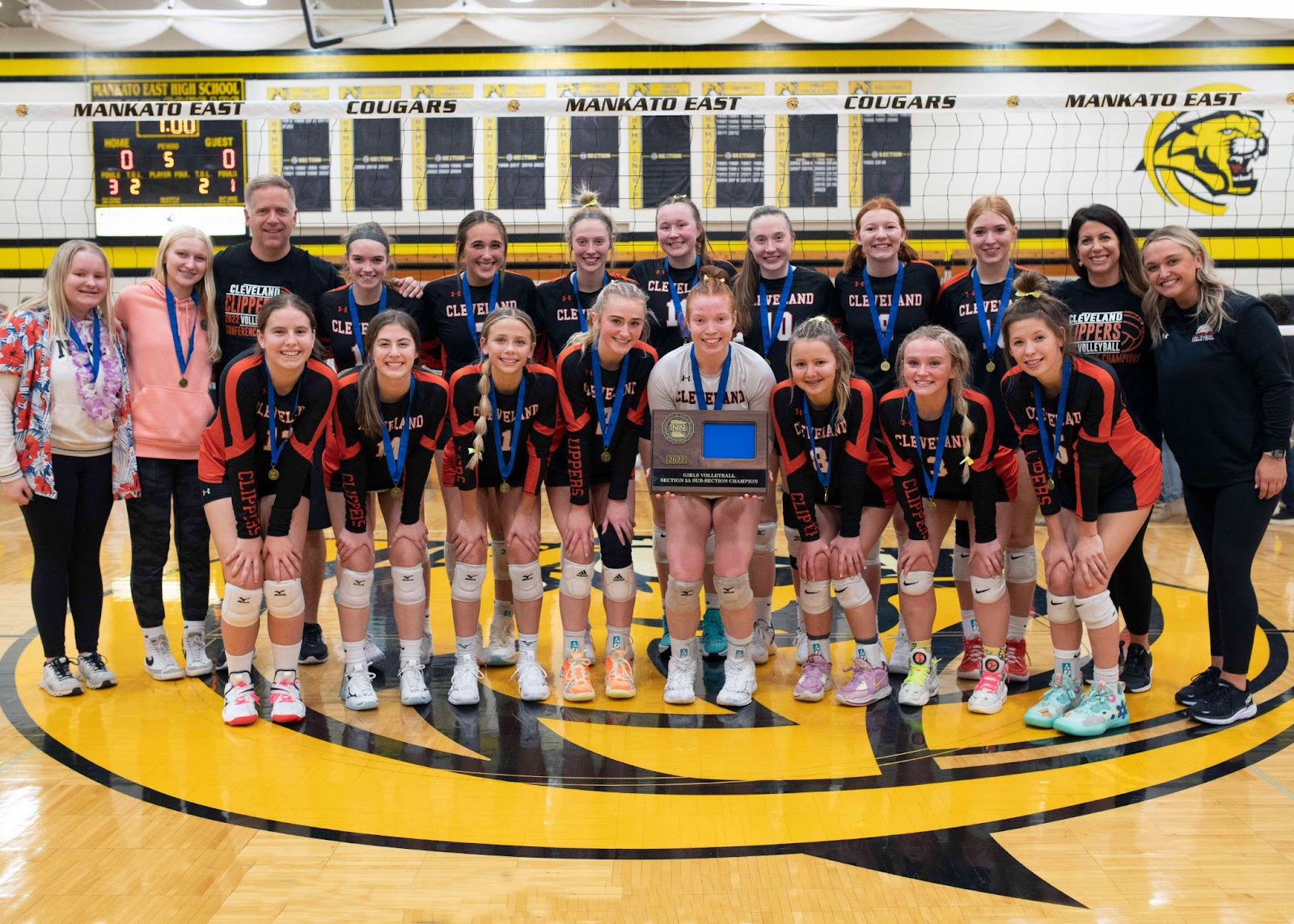 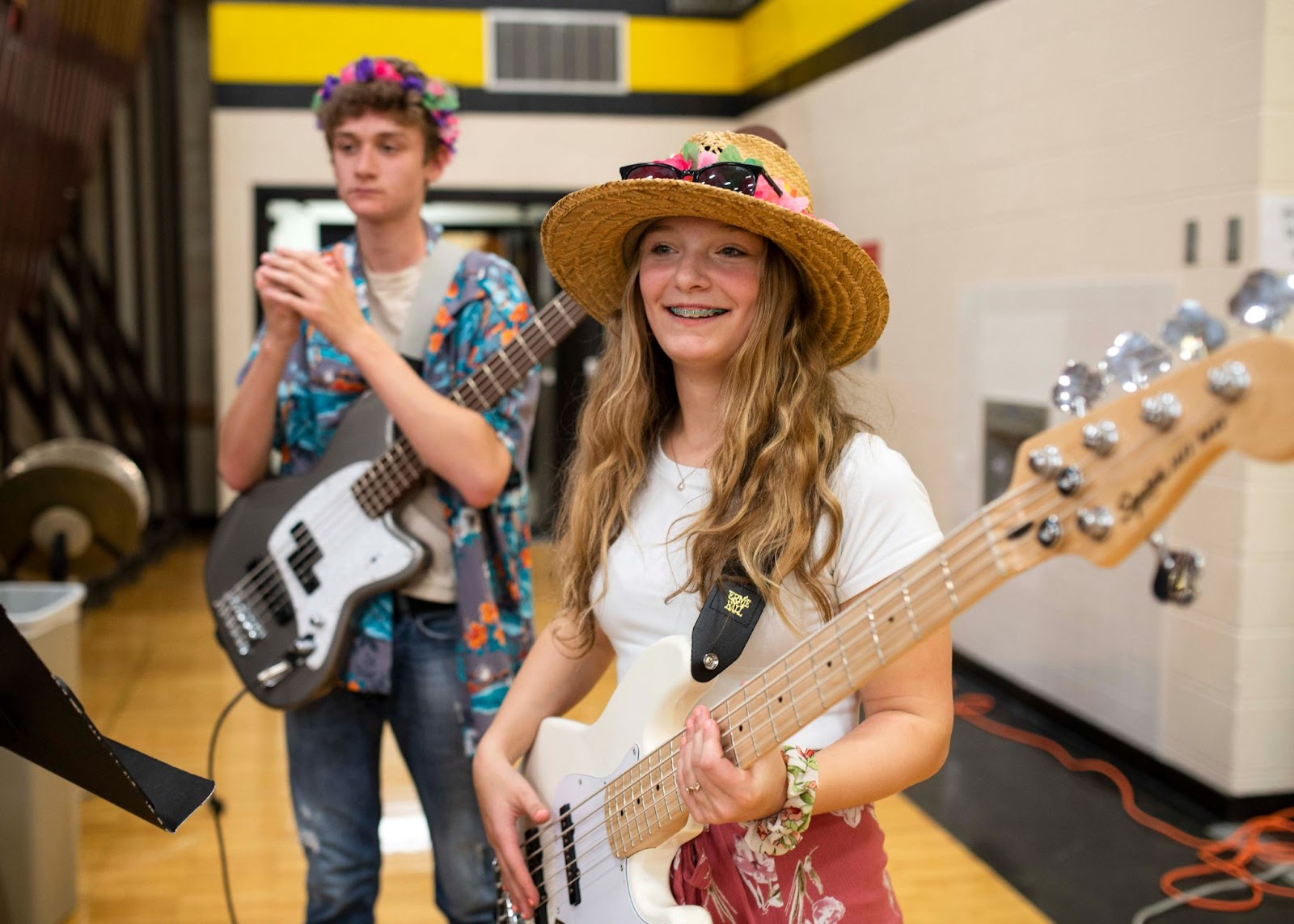 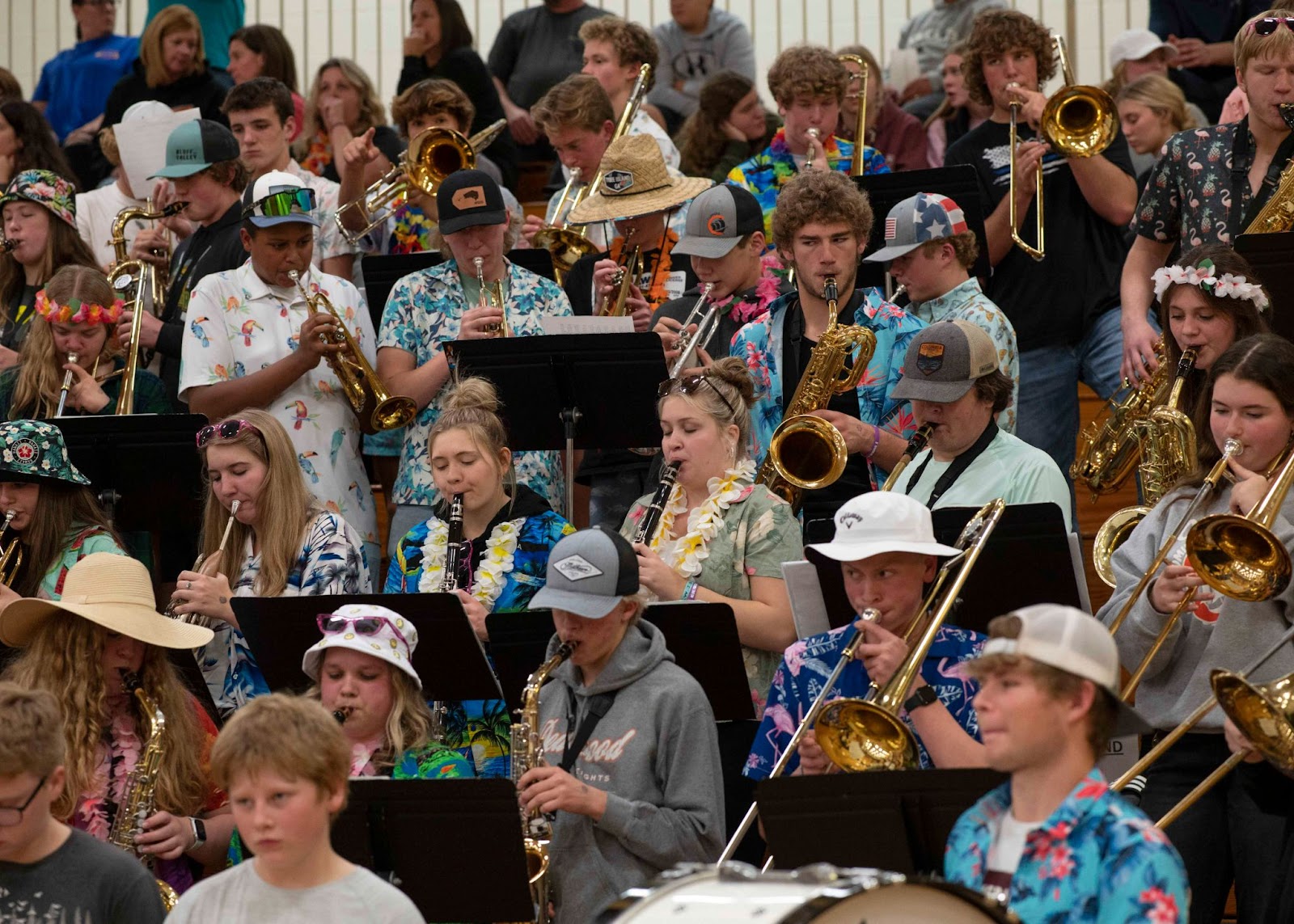 The Pep Band had a Hawaiian theme. 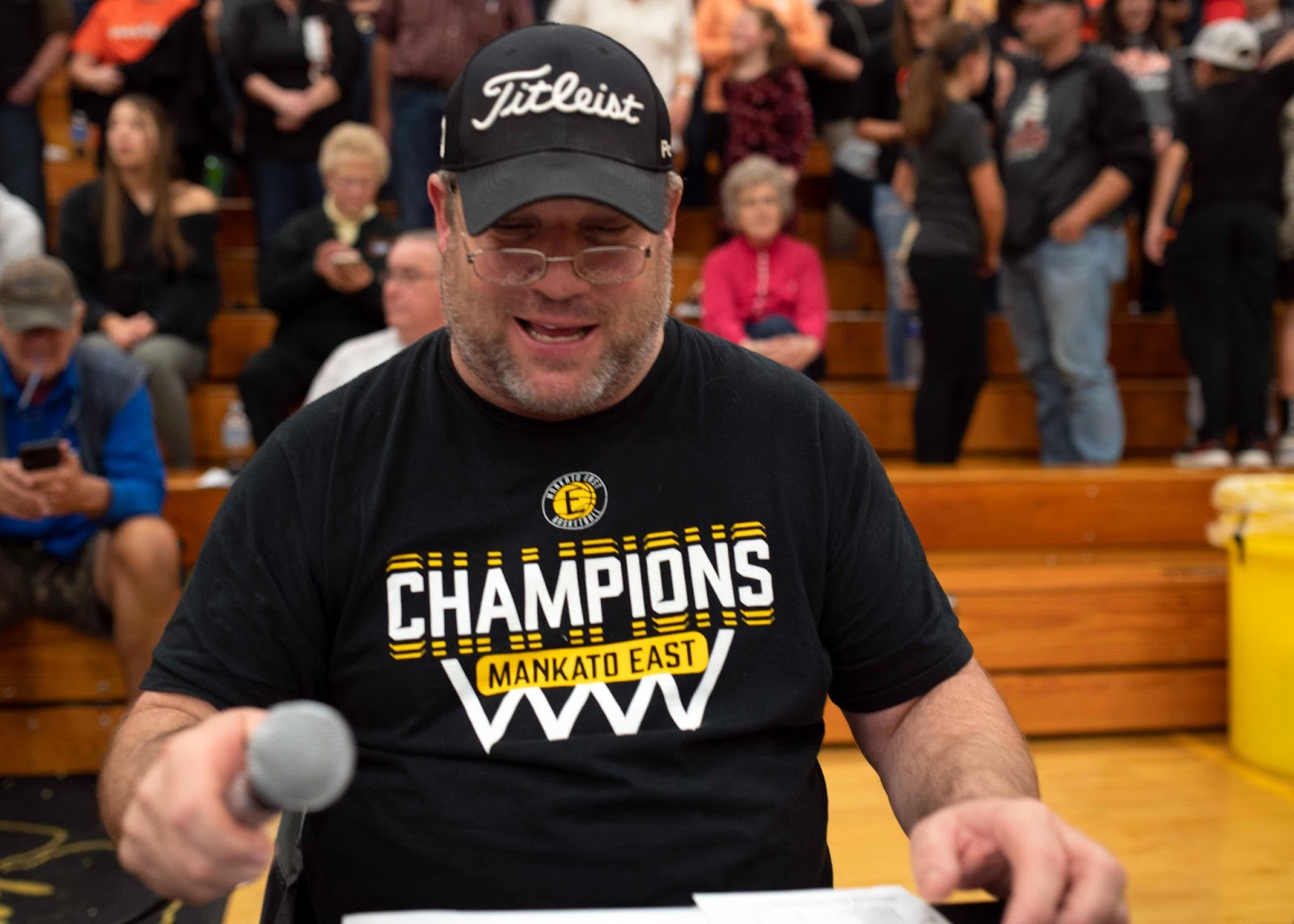 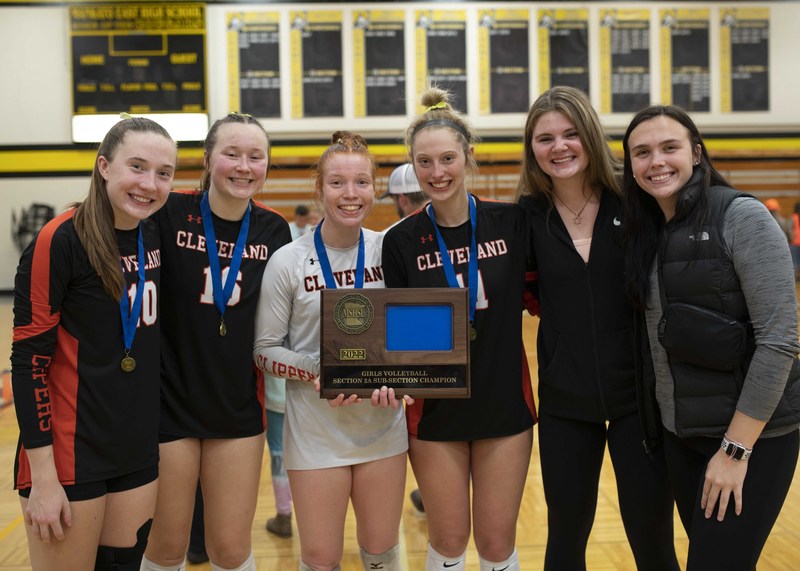