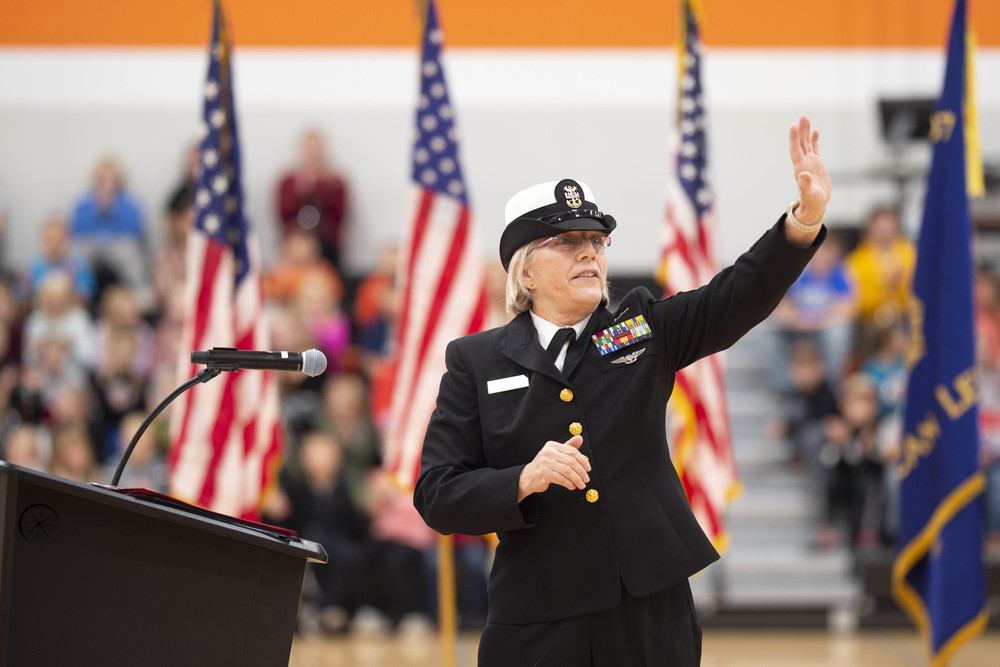 With only one percent of the US population serving in the military, the saying “Never was so much owed by so many to so few,” which stemmed from a 1940 speech by Winston Churchill, is an appropriate reminder, said Janice Shelton (above).

Shelton (CHS 1976), a Navy veteran and currently a physician’s assistant with Mayo Health System was the honorary speaker at the Cleveland Veterans Day program, which was held in the big gym on Friday morning.

She went on to say that for some in the room, service was not a choice; they were not given the option.

“But by being here today, we recognize you accepted the draft and served your country with honor and dignity.”

But whatever path was taken to serve, Shelton said, they all took an oath together, and that was a start of a strong bond based on friendship and service.

“We have shared hardships, and one of the hardships was we didn’t know if we were coming home.”

She went on to urge all veterans to share their experience with young people.

If it were not for my father and my brother going into service before me, I don’t think I would be in this uniform today. They were my mentors, so I ask all military veterans, if you have the opportunity to mentor young people, please do so. Share your military experience with them and encourage them to consider serving their country.”

Also stepping up to the podium, freshman Carter Kern recited his Voice of Democracy essay. He said that area veterans sacrifice living in a small town and enjoying their rights, even though they understood those rights didn’t come easily.

“Thanks to veterans, I am allowed to freely walk my hometown streets, singing whatever song I like, and praying to whatever religion I please without fear of consequences. Not only have veterans alleviated us from these fears, but they have also allowed us to think freely and express ourselves. They have also allowed us to challenge our government.”

Kern went on to say that veterans should also be honored for what they do after their military service.

“Veterans have never stopped serving. They they have retired, but they still strive to keep America a safe and secure country while honoring and respecting our active military members as well as themselves. You can see examples of this every day, whether you are driving to school and see the flag being raised or attending your school football game and watching the performance of the color guard.”

Also at the ceremony, three elementary students were selected to read their essays on what Veterans Day means to them.

“On Veterans Day, we honor the veterans who have fought for our freedom, said second grader Barrett Vogel. “Some fight in helicopters, behind sandbags and in tanks. All of those jobs are very dangerous, and we should be grateful to them.”

“They fight knowing that their lives are at risk, but they still do it for their country,” said fourth grader Blair Voit. “They love helping our country. They have saved many lives. Just remember that they love you very, very much.”

“I have any family members and friends who have served in the military, and I have heard stories about how hard of a job it is,” said sixth grader Brayden Seeman. “Veterans have protected us for many years and will keep protecting us for a long time to come.” 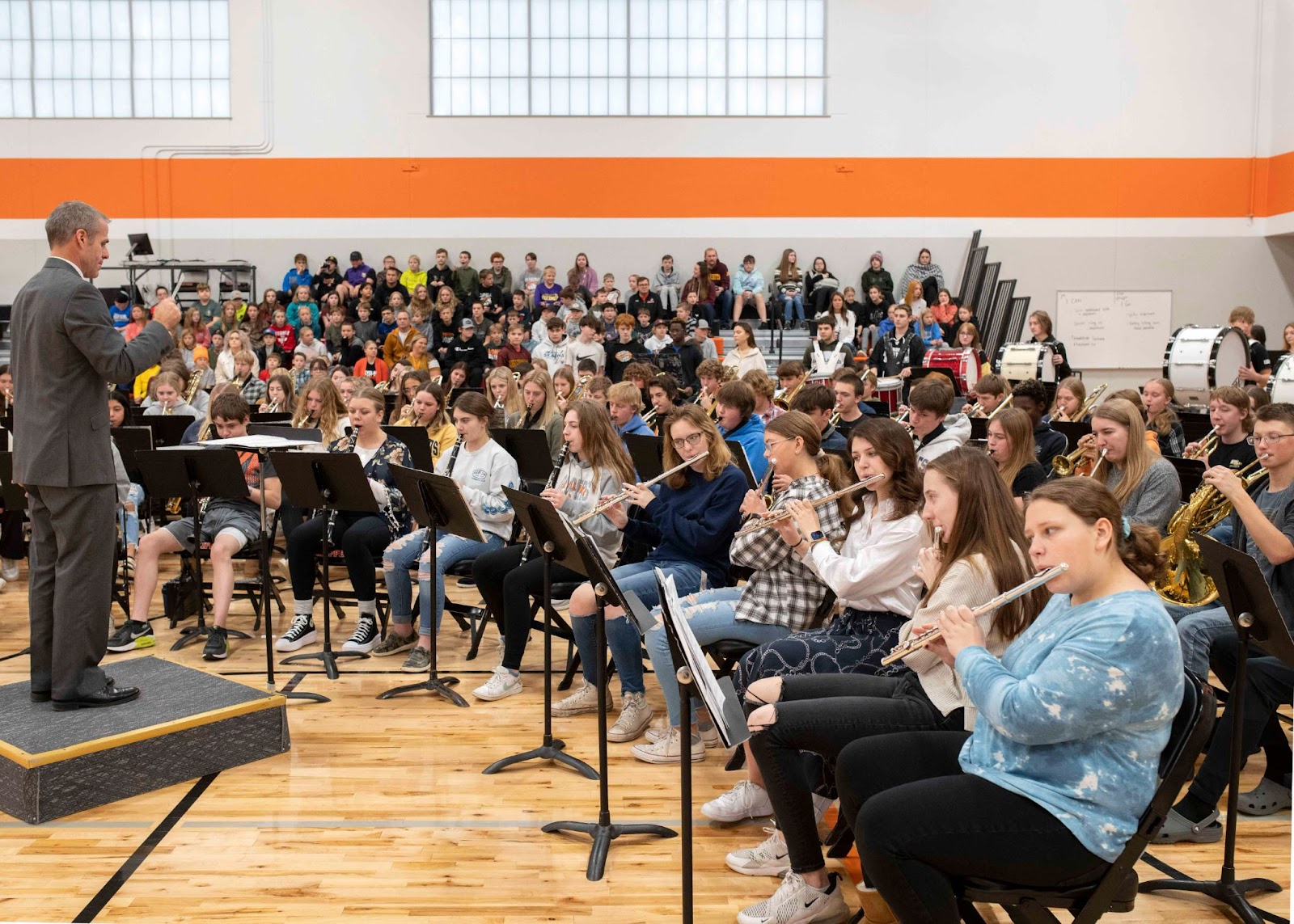 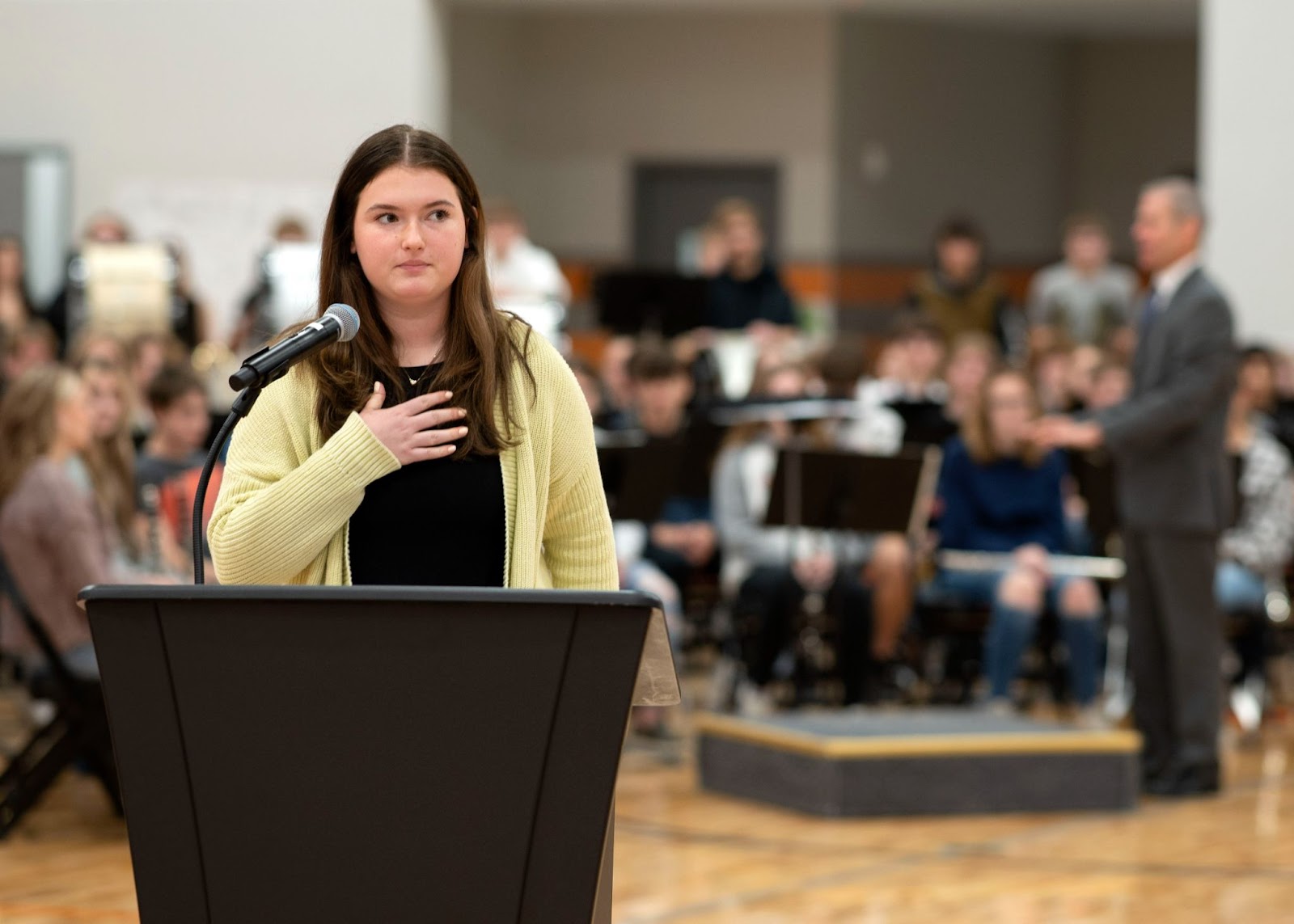 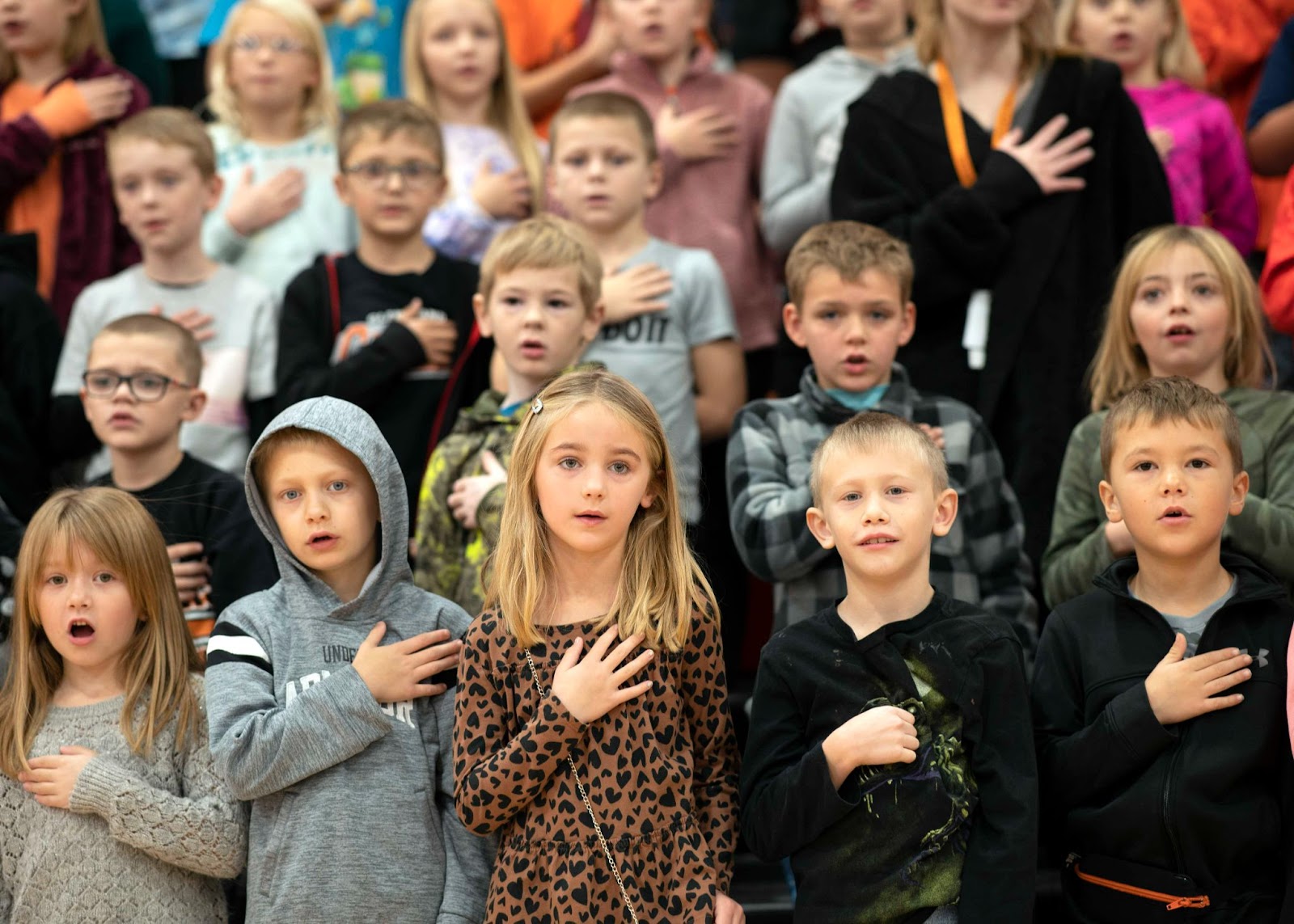 Students recite the Pledge of Allegiance. 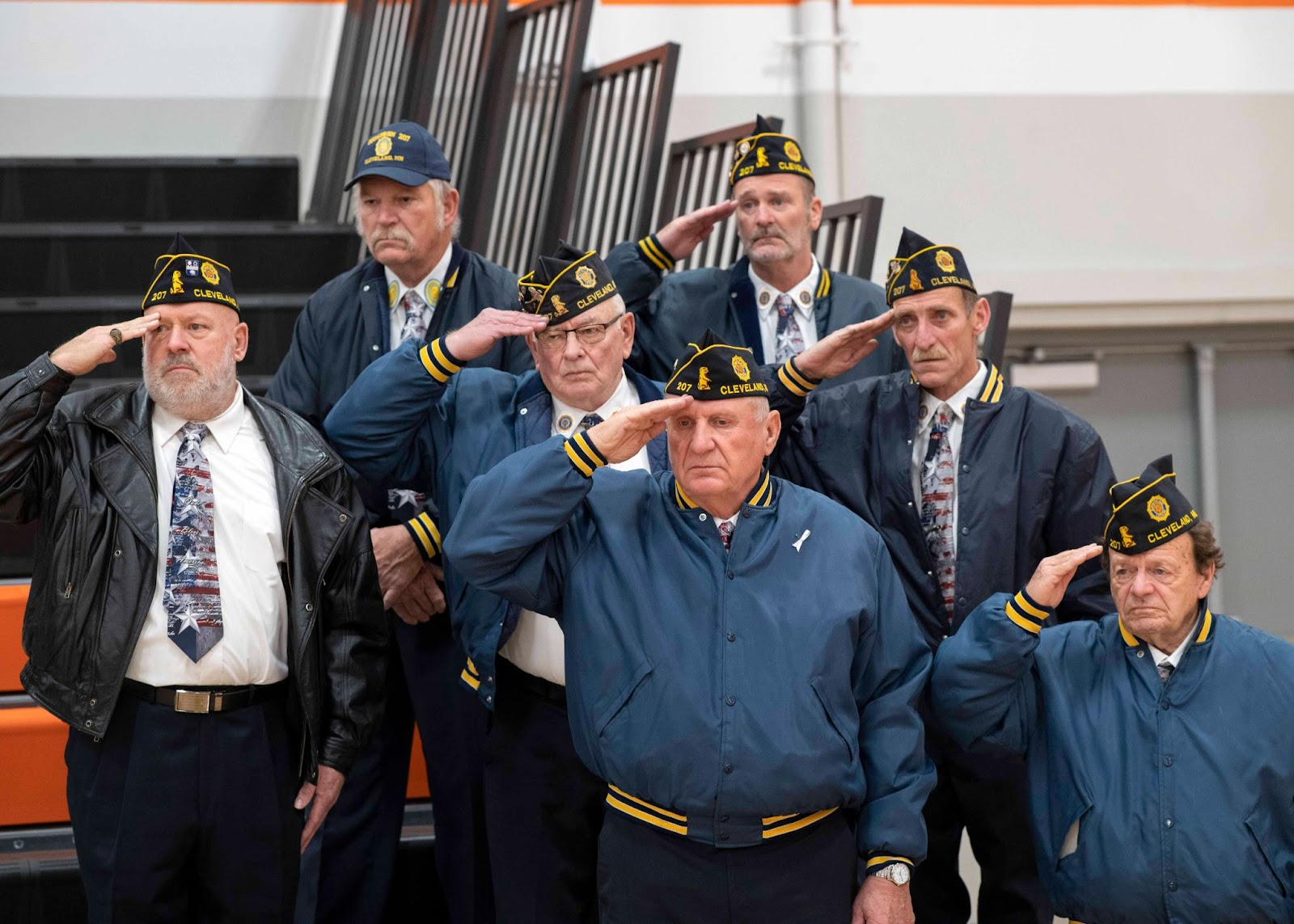 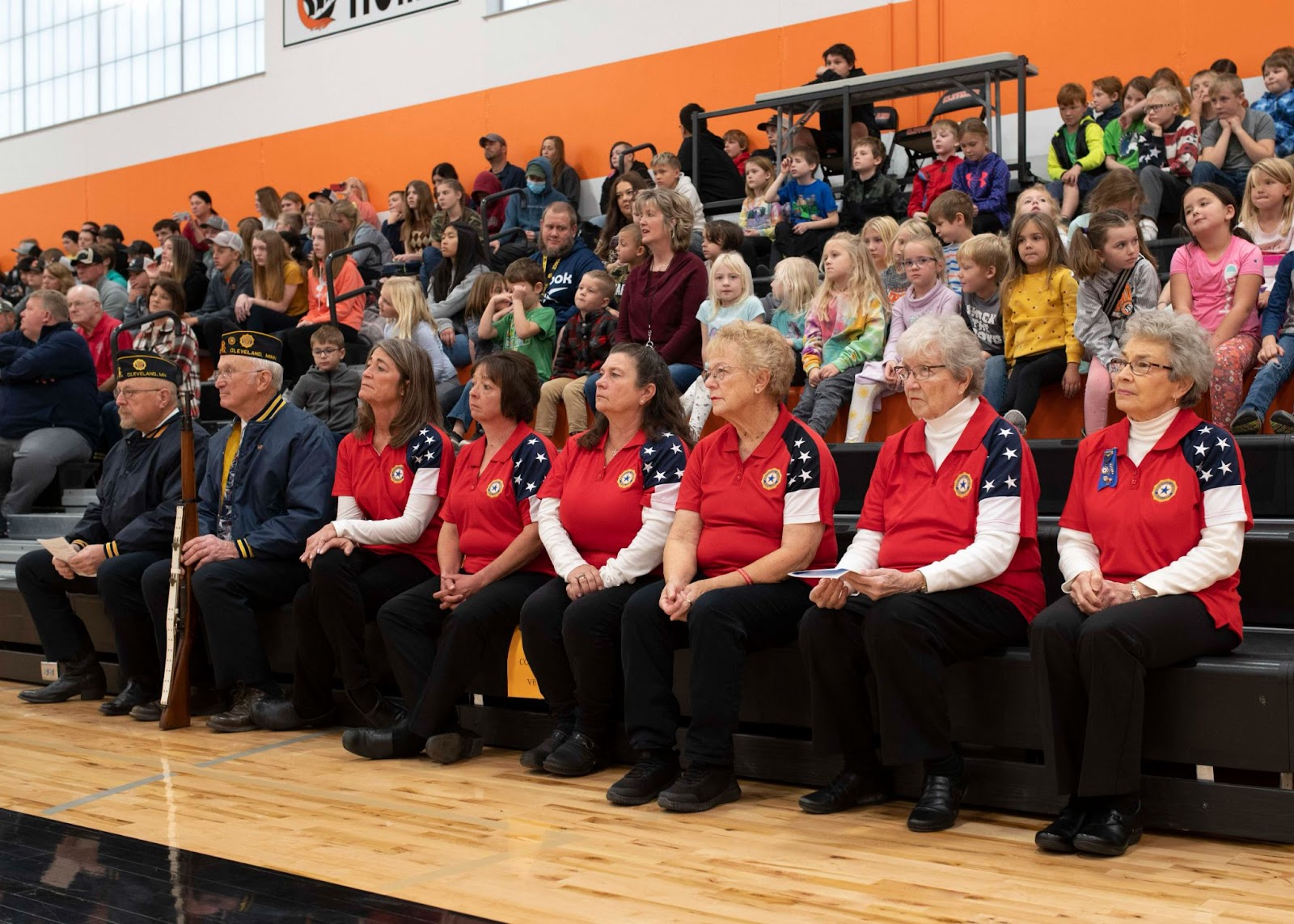 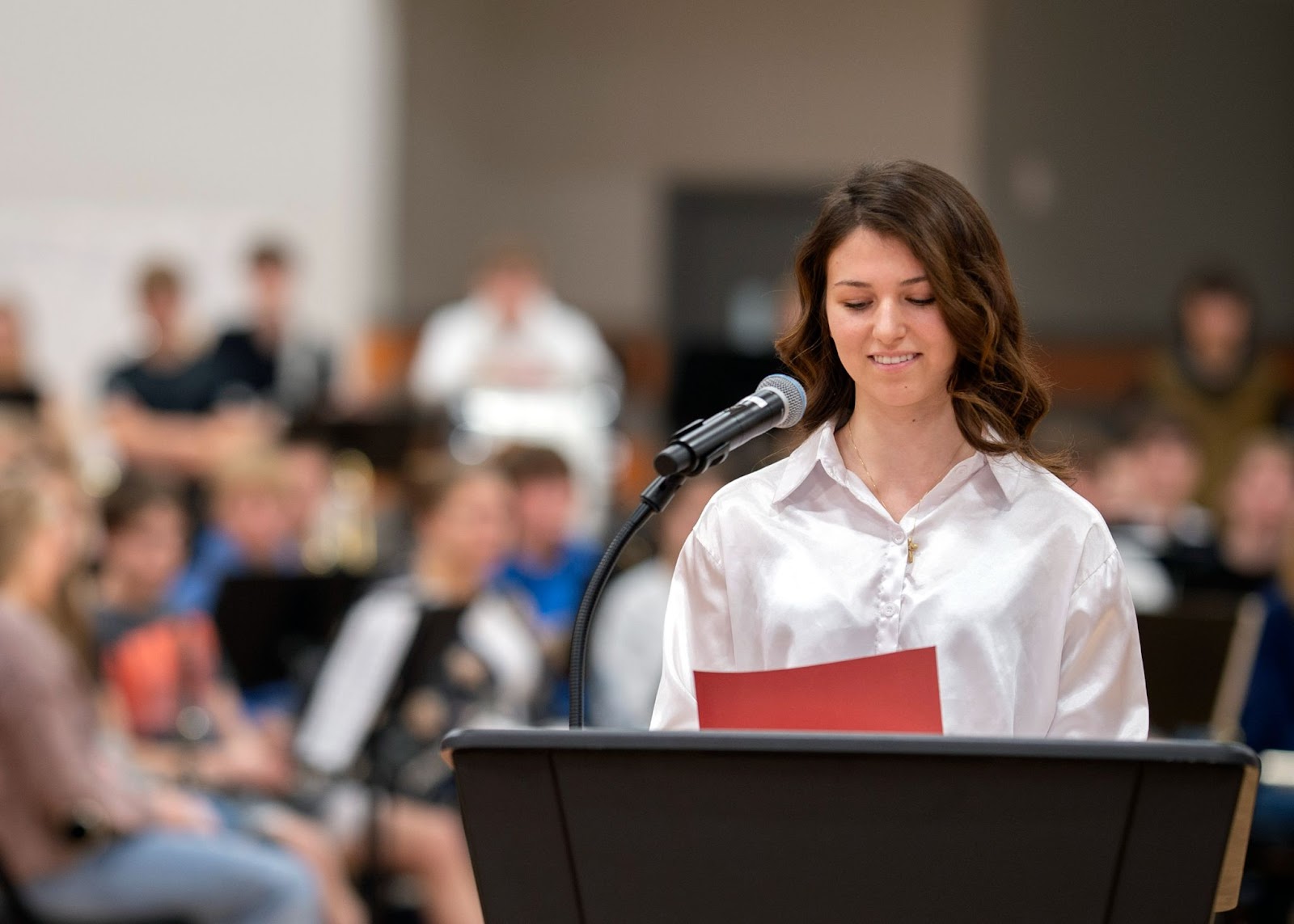 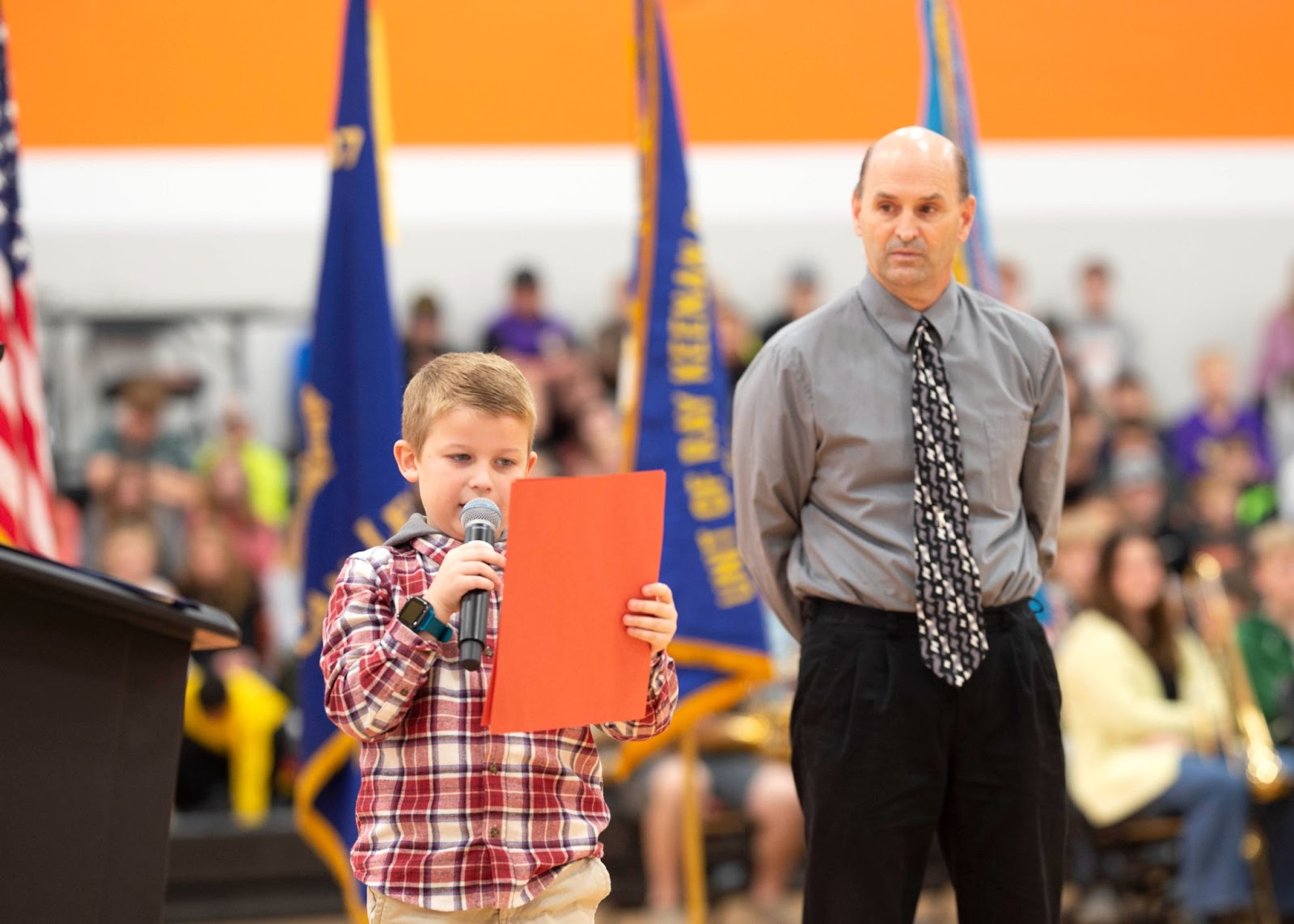 Barrett Vogel reads his essay. In the background is assistant principal David Cink. 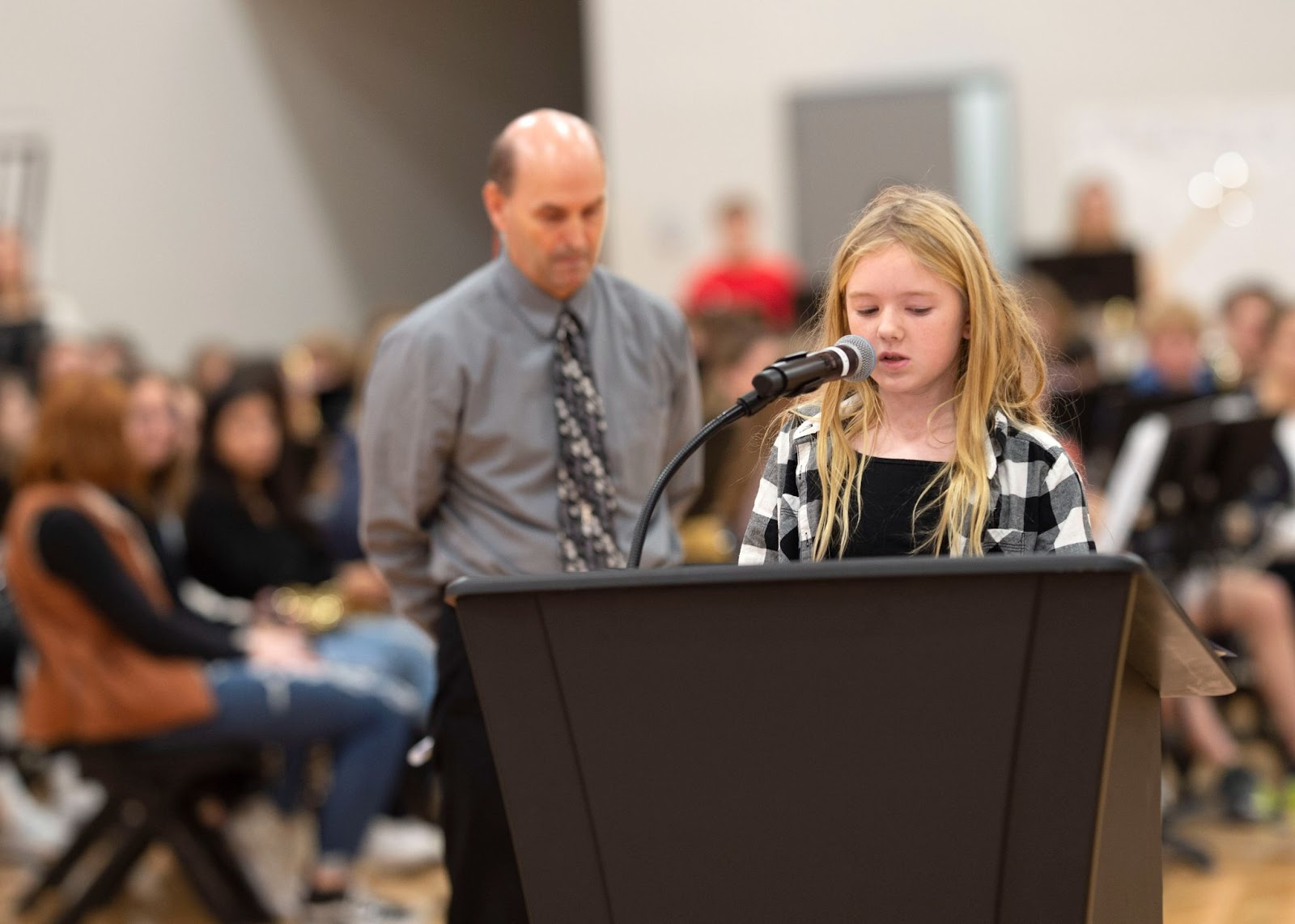 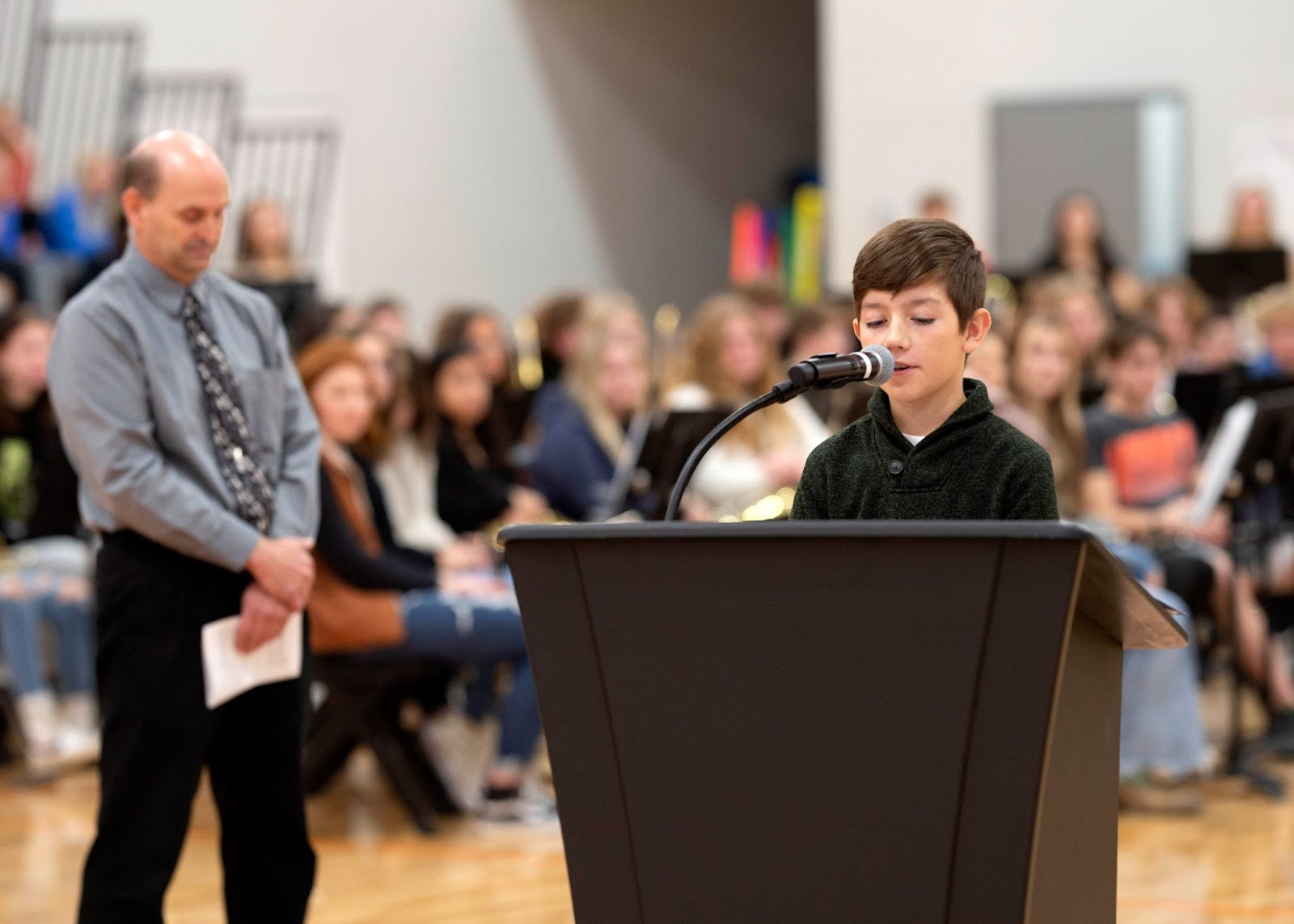 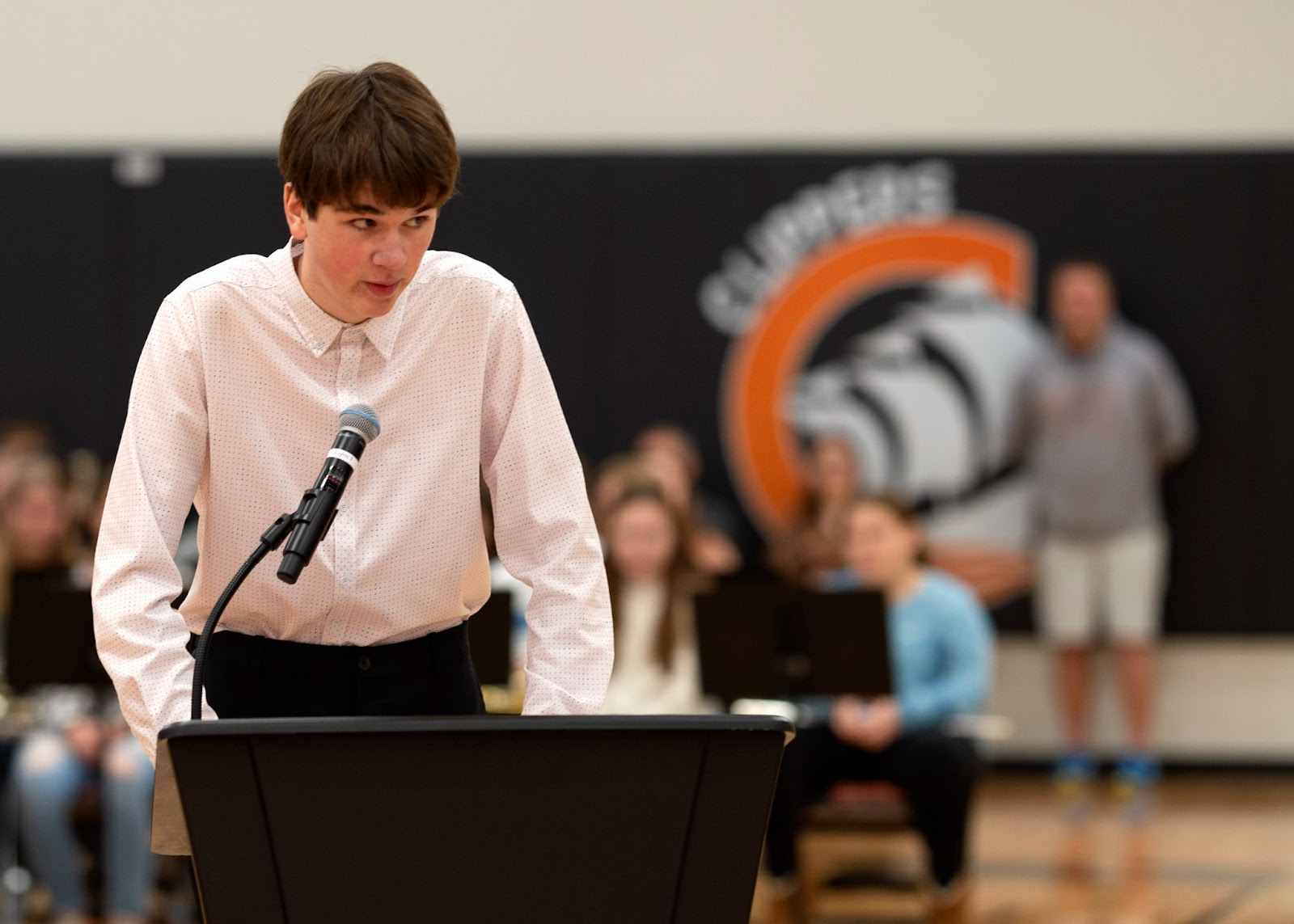 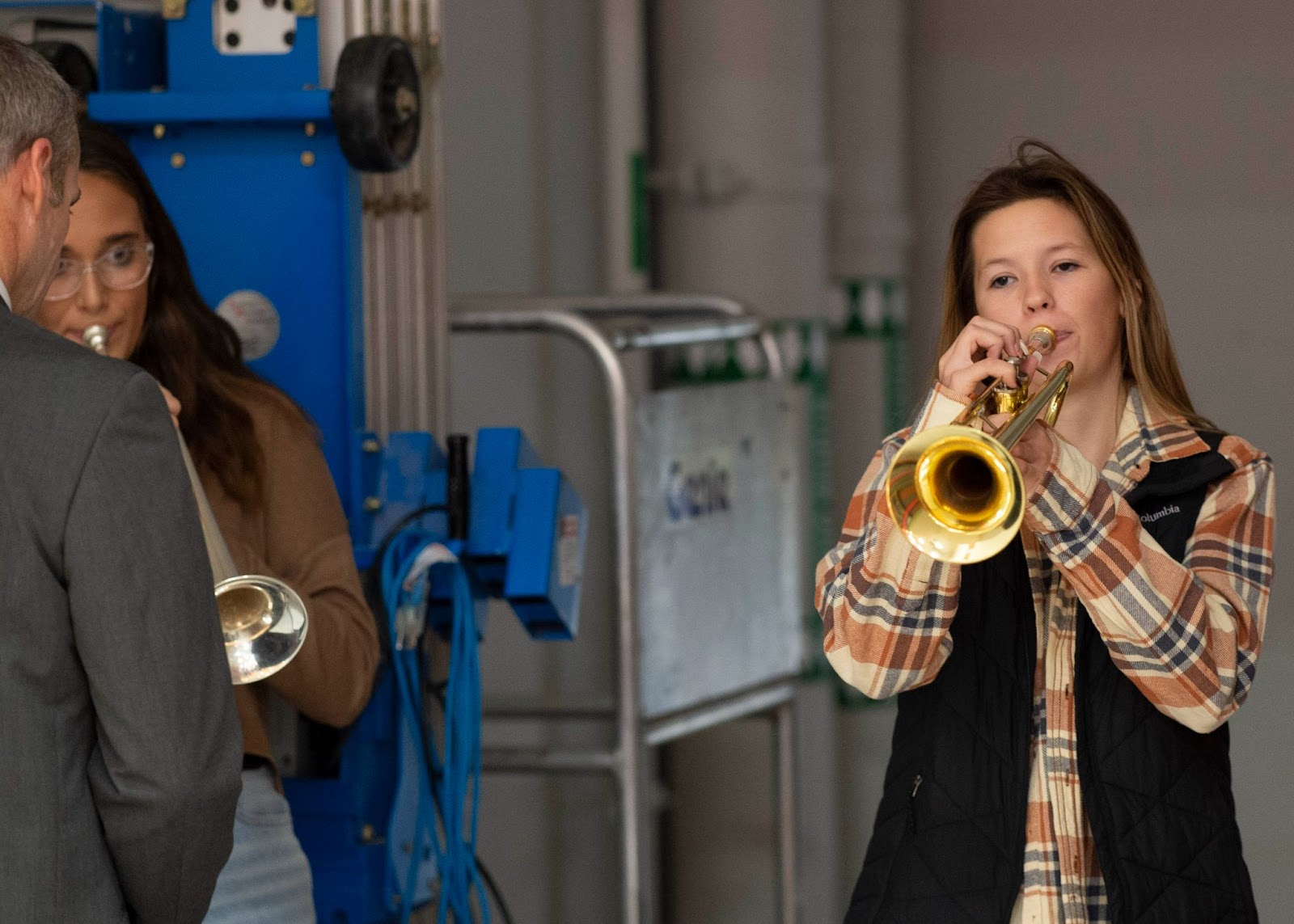 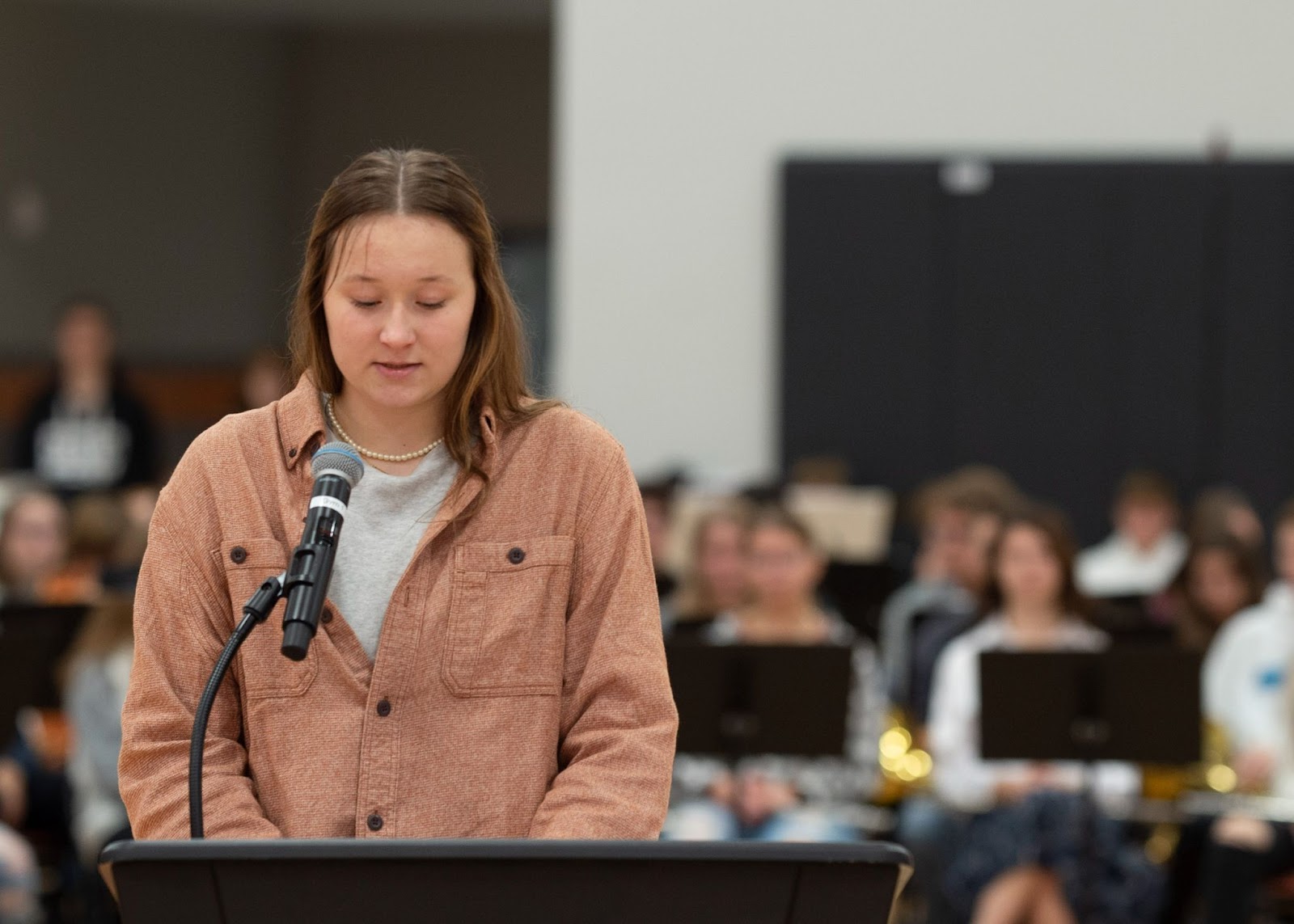 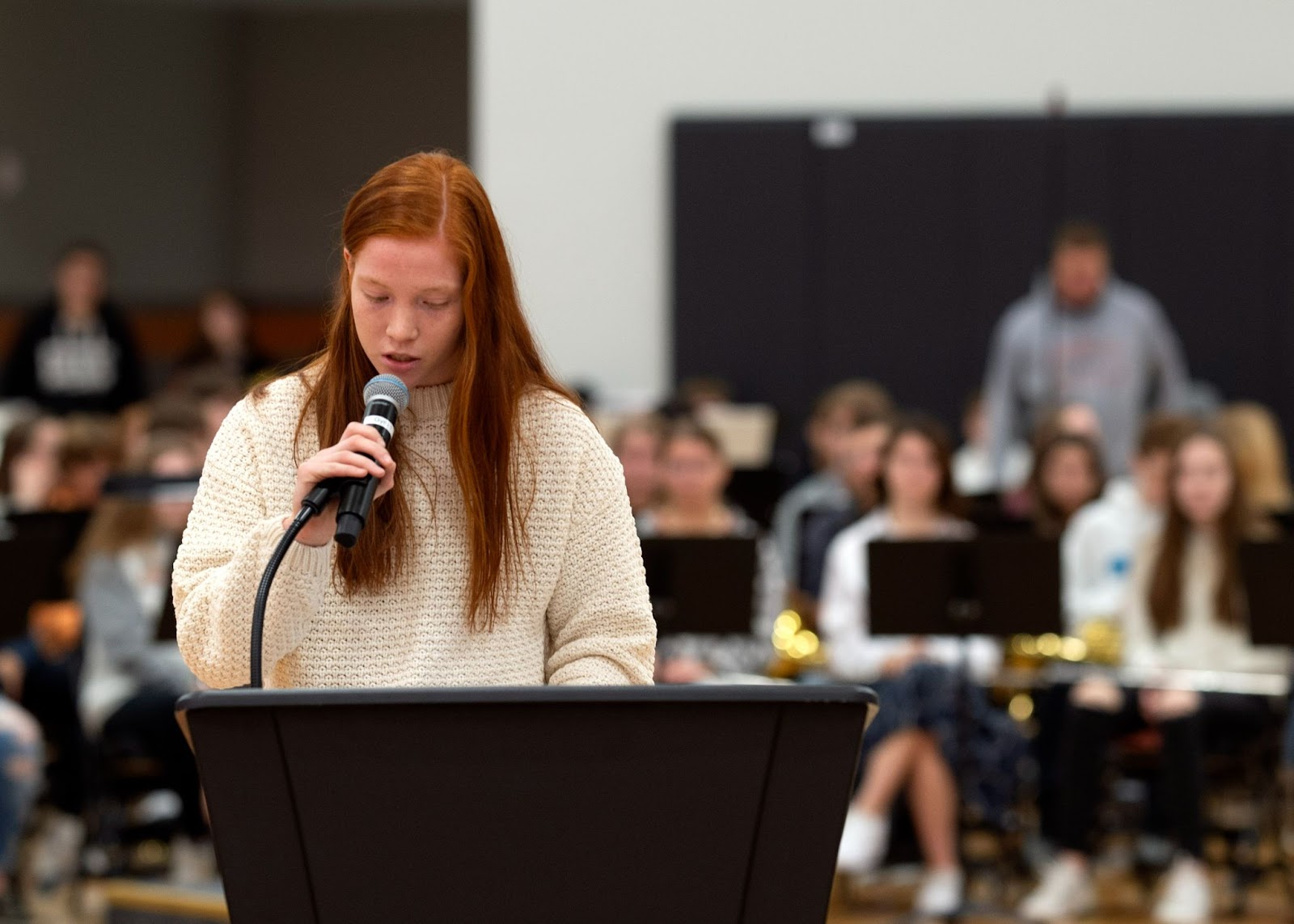 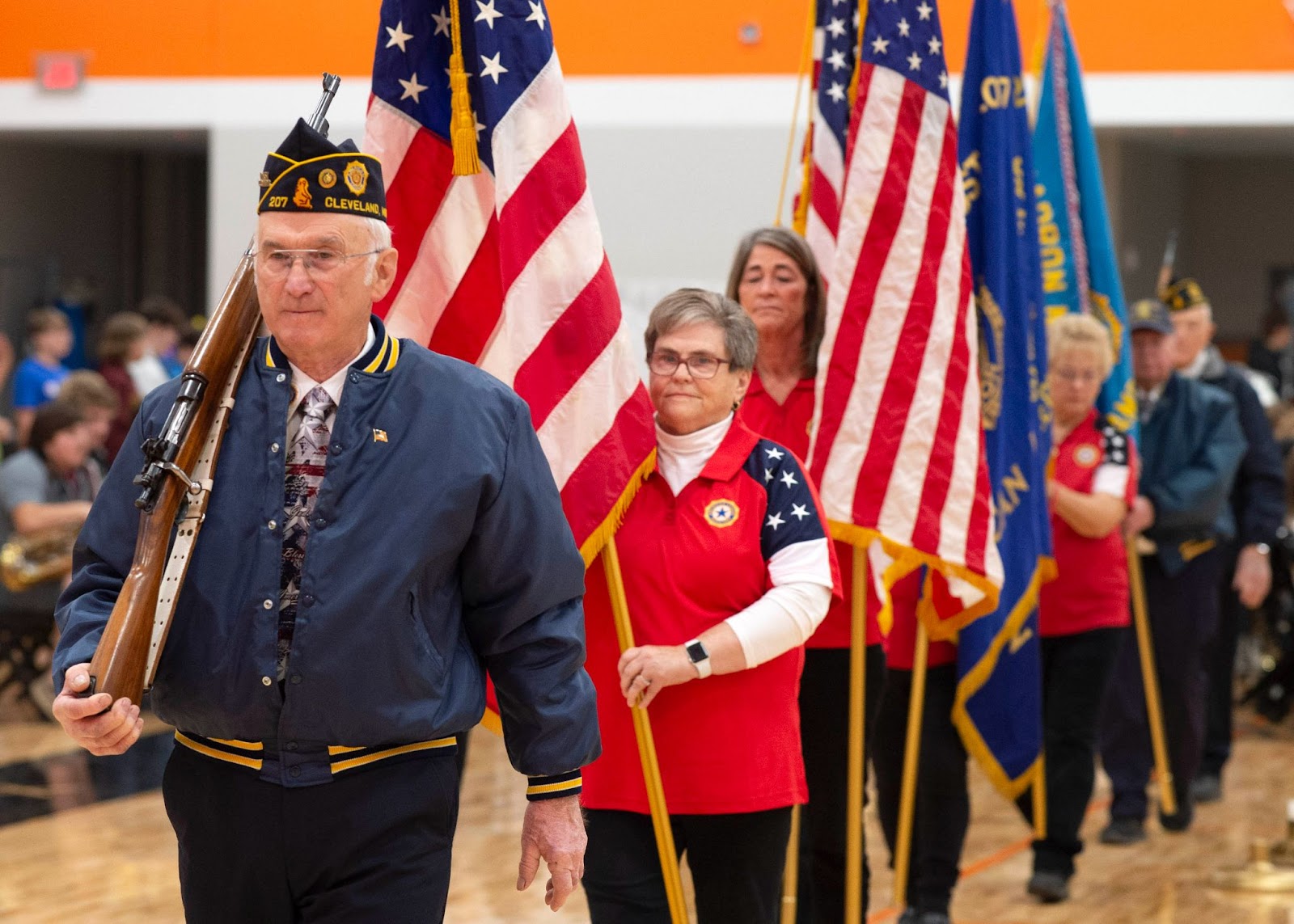 The color guard exits the flags. 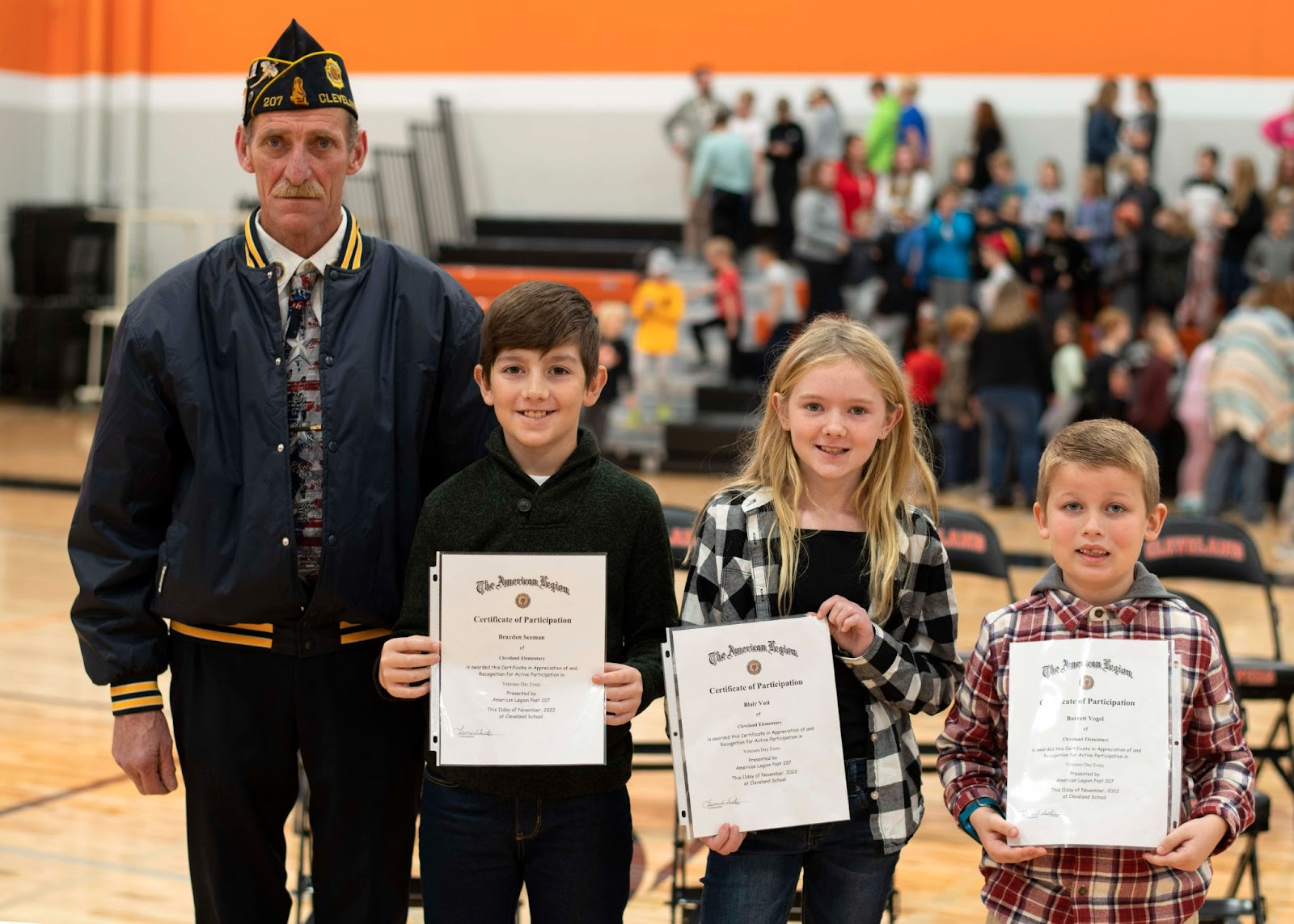