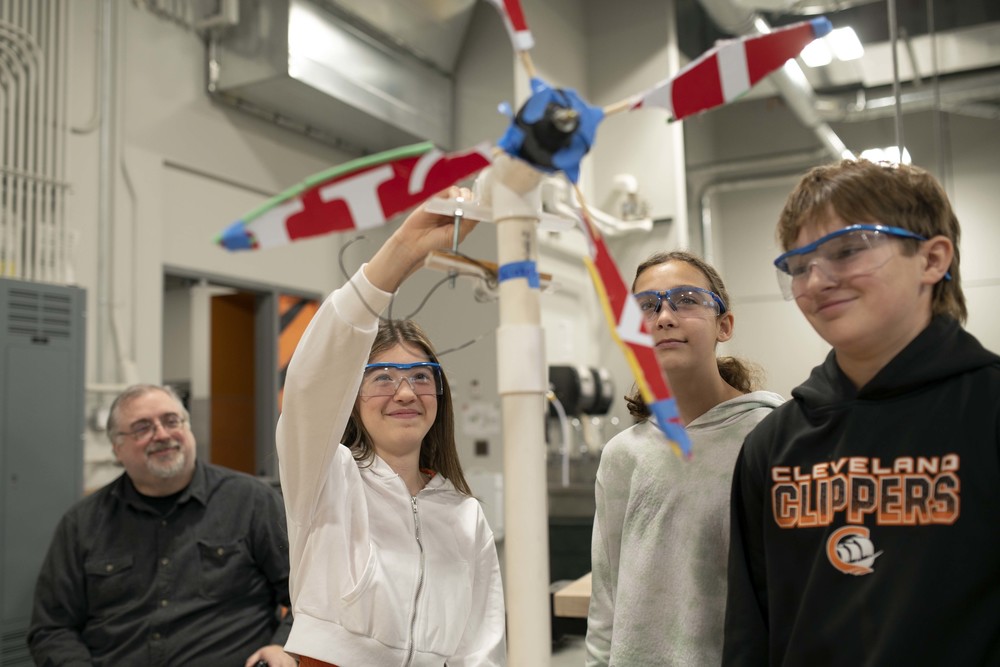 From design and industrial engineering to team dynamics, record-keeping and presentation skills, the seventh graders’ energy project, in which they designed and built small wind turbines, had several moving parts, just like the wind turbines themselves.

Building the wind turbine was a project provided by Project-Lead-the-Way, where students engage in hands-on, real-world learning, and was part of Industrial Tech teacher Joel Boehlke’s Energy and the Environment course, a science, technology, engineering and math (STEM) class.

The project lasted for four weeks this fall quarter.

“The goals of this comprehensive project were to make students aware of the technology and how it is used and why it is being used,” Boehlke said. “It allowed students to design and fail so they can see continuous improvement. They also learned how to use tools they may not be familiar with.”

In preparation for the build, the seventh graders first studied energy: the different types and how they can be changed from one form to another. They also researched how energy has been used since 1880: the effects of historic events on energy use and energy’s effect on historic events, including the world wars, the Arab oil embargo, recessions and current global conflicts.

“I split the years into a number of sections and had the student use the internet to search for the information and then create a graph for that time period, which we posted on the wall,” Boehlke said. “They looked at the data and answered questions.”

The students then learned about the role of energy in their lives and the need to control the amount of carbon as a waste product.

“We discussed how the solar system is warming so as to be open minded about all the issues when talking about the environment,” Boehlke said. “We talked about the positives and the negatives of all the sources of energy, including ‘green’ and fossil fuels and what would have happened if we all still relied on animals for our primary power source.”

After gaining the background knowledge, the students began the hands-on project by using a website to learn the parts of a wind turbine and how they work together to convert wind energy to rotational motion and then to electricity.

From there, breaking into groups, they designed blades for their turbines. The blades needed to create enough torque to pick up as much weight as possible. For the weights, the class used 1/4 inch nuts as Boehlke had a lot of them on hand.

“I know from experience at least twenty-five nuts are the minimum for the blades to be able to turn a gearbox, but the more they can lift the better.”

Drawing from lessons learned when they were building robots as fifth graders, the groups then designed and built their gearboxes. A gearbox converts the low-speed, high-torque turbine rotation to a lower torque and a faster rotation needed to optimally rotate an alternator, a machine that converts rotational motion to electricity.

“I reminded them about their unit on gear ratios so they could choose the correct gears to build the gearbox,” Boehlke said. “Using a power drill, I also demonstrated the different voltages that can be produced with different gear ratios.”

Finally, the class built and tested their turbines. Materials cost around $40 and consisted of a PVC pipe with a T-joint and two plug caps. The hubs were rapid prototyped with one of the school's 3D printers.

Each group tested its turbine using the same box fan, so air flow was always the same for each design. With the alternator attached to the turbine shaft, the goal was to generate at least 5 volts of electricity, the amount needed to charge a cell phone.

Students kept their data in a comp book, so they can look back on it and use it for the next lesson or project. The final stage of the project was presenting the concepts they learned to their peers using a slide show.

For Kayla Hoffmann, one of the seventh graders, she liked seeing all her time and effort coming together in a working model, but understanding how to better function in a group setting was a valuable sidebar.

“I learned how to work as a team: how to cooperate, what to do and how to distribute work evenly, like you need to do that. This is my job. This is your job.”

Boehlke said comprehensive projects like this are the goal of Project Lead the Way, a transformative learning experience for both students and teachers.

“I have always wanted to teach classes like this, but Cleveland offered the first opportunity to do so since I graduated from college.”

“We build working gliders and water bottle rockets with the goal of learning the properties of flight and what it takes to get a rocket off the ground.”

Ninth through 12th grade students can take Introduction to Engineering and Design.

“This is a college-level class where students study how to design mechanical devices and learn to build assemblies from their designs.”

“They research in depth the use of electrical pulses and modern chipsets to make projects that are used in industry and can even be programmed to do what the student wants them to do.”

Computer and robotic technology is embedded manufacturing systems used for making products people use every day, Boehlke said, so he wants to ensure his students are prepared. Several have gone on to study engineering and industrial arts after graduation.

“The impact that I hope I have for all of my students is that they are not afraid to tackle the tasks they find that involve technology and use the skills they have learned to solve the problems they face.” 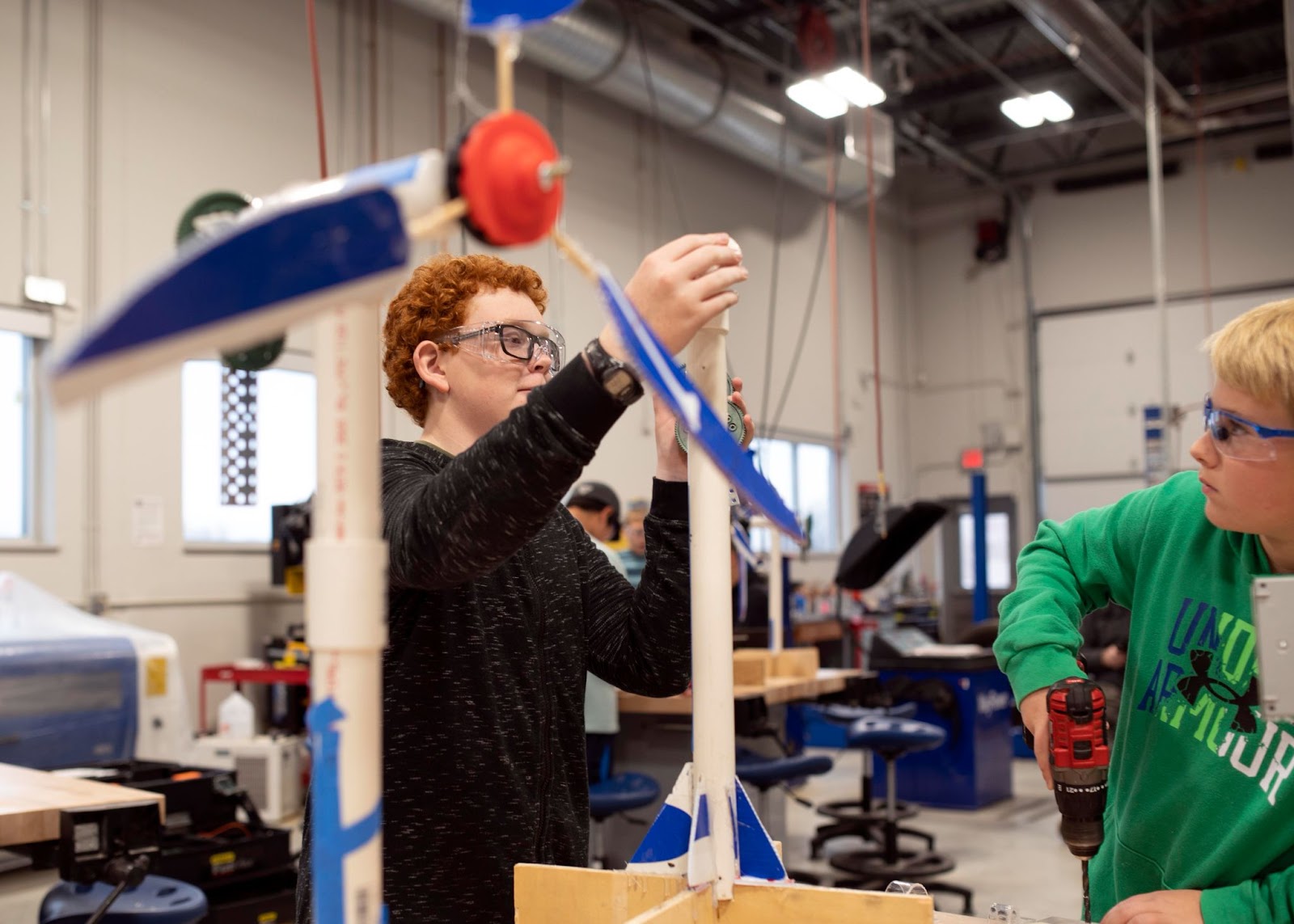 Ben Traxler installs a component on his group’s wind turbine. 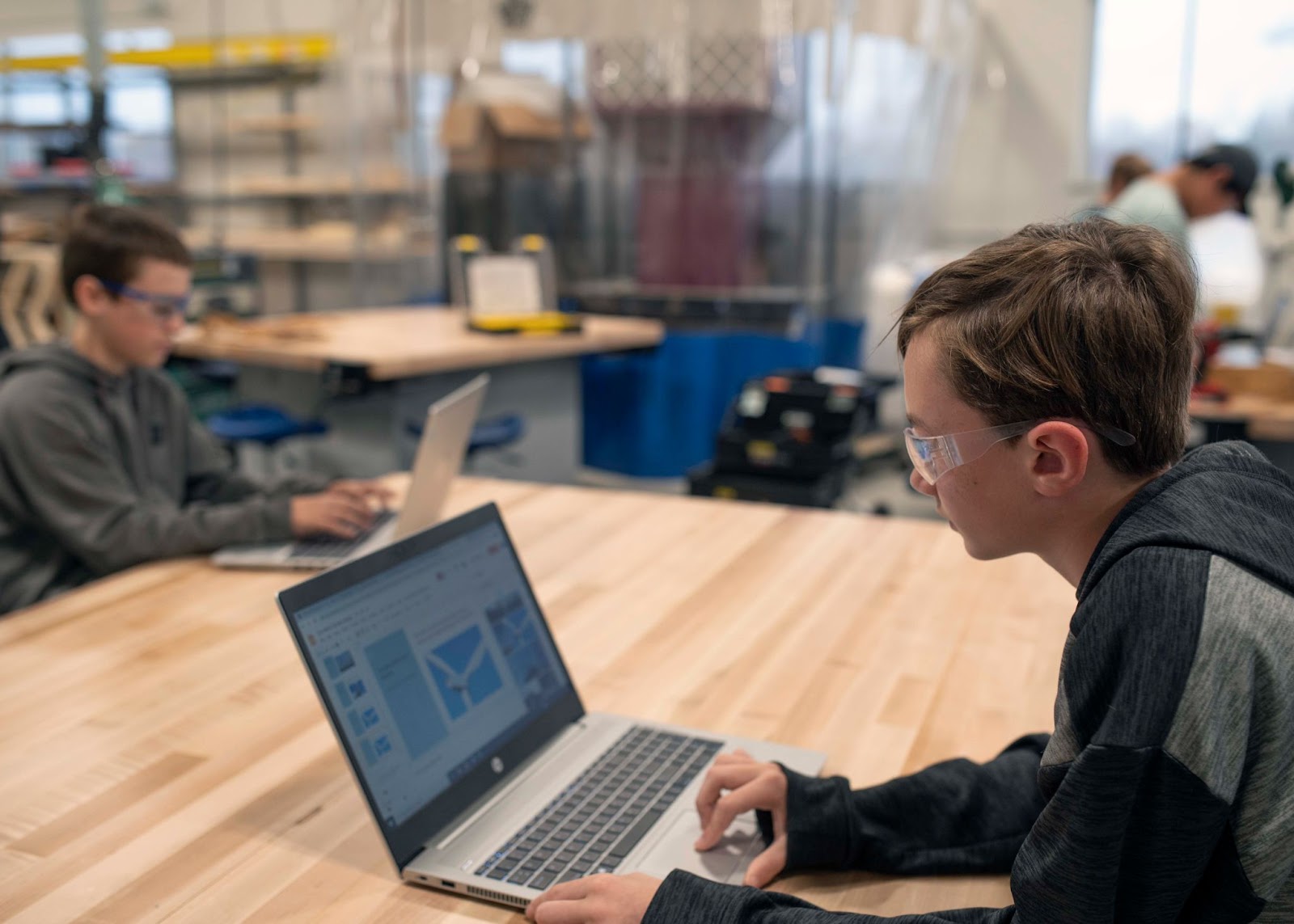 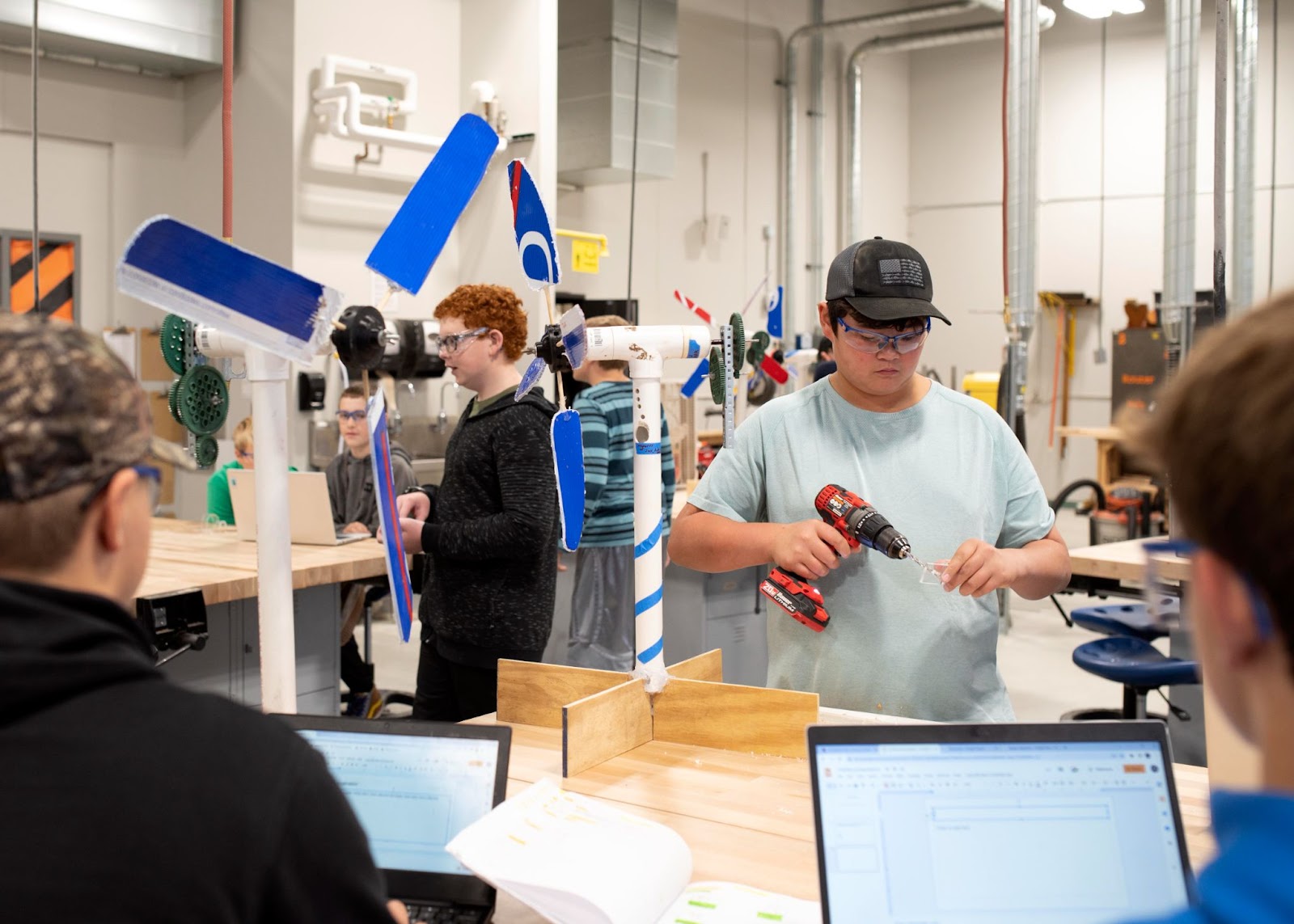 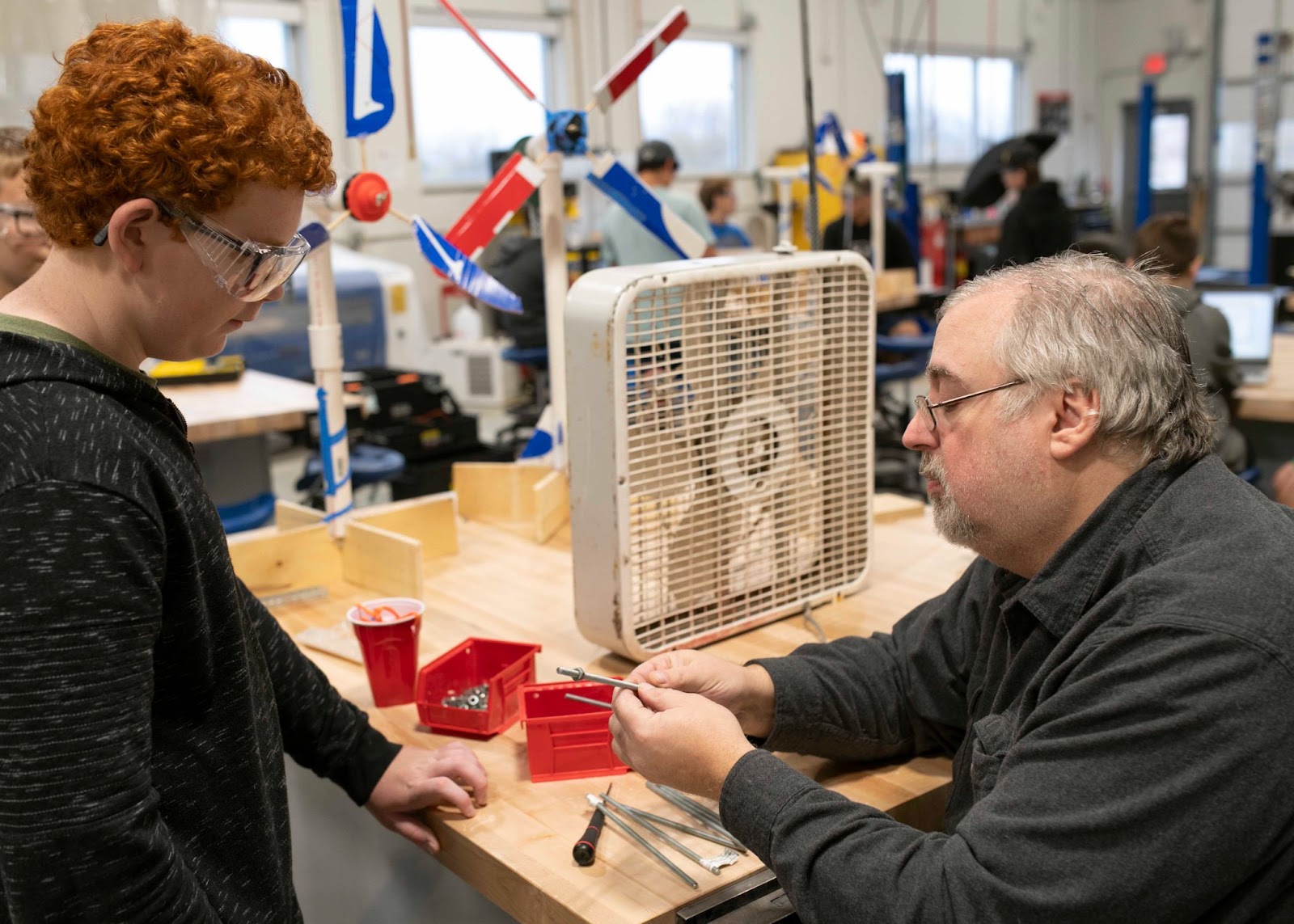